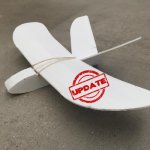 Admin
#2
I checked my phone a few times

#3
What was with this podcast? I could hardly believe it came from FT. I couldn't listen past 15 minutes as I drove to indoor flying this evening. To roll over and accept the FAA ruling is wrong on so many levels, some of them not even RC-specific, that I couldn't believe what I was hearing from FT: "This is it. Obey." Maybe you are so caught up on multirotors you don't remember all the other facets of the past-time/hobby that would rather the FAA just outlaw multirotors altogether. Just to leave the rest of fixed wing, etc. intact. None of this would have happened if it weren't for multirotors.

Staff member
Admin
#4
Peter. There's plenty of cases of people abusing fixed wing operations. Remember Trappy? He was flying a fixed wing aircraft when he was taken to court by the FAA.

The only other case I know the FAA made a big deal of, was their attempted attack on Equisearch. They were flying fixed wing too.
B

As a relatively new modeler, I've benefitted tremendously by the content and information shared by Flite Test, and I've supported you with purchases of your products. But I have to say I was deeply disappointed by the stance taken by Austin and Alex on this podcast. I get it, as a distributor of UAV products, you have to CYA. I also get that a lot of you are full-scale pilots (or related to them, or may someday wish to become one), and I can appreciate the unique leverage the FAA has on a full-scale pilot/model aircraft enthusiast. But come on, this is just wrong on so many levels. Allowing the FAA to get this foothold will hurt the hobby, if not kill it in the long run. Just look at the damage this has already done to the AMA's reputation (non-deservedly, thought it may be). Maybe you're already resigned to the fact that this is a done-deal, and you're "OK with it". I might be too if I had access to private or AMA-sanctioned flying areas, or the resources and time to comply with the burdens of additional FAA regulations on model aircraft that are sure to come. But I don't, and there is a limit to how much nonsense I will put up with before I find another way to enjoy my free time with my kids. In the meantime, I can tell you this much - I am fighting. I have written my congressman, and requested a sit-down meeting to discuss this issue face to face. I am an AMA member, and have sent them additional contributions to fuel their legal effort against this overreaching, burdensome, ineffective, and disingenuous attempt to make the public "feel safe". The fact that you appear to be doing anything less than that amazes me. Say it aint so?

#6
This is the first time I've been well and truly disappointed with the FT team. Guys, take this from someone who has dealt with the FAA his entire life (and has never run afoul of them), these people are not your friends, and they do not have the public's best interest at heart. There is legitimate blood on their hands in the full scale world and they have the gall to tell us they can accomplish something positive in the unmanned world? When they get the Air Force to stop crashing large scale drones into houses and teach their ATC minions to treat GA pilots like human beings I'll give some thought to them having standing to even comment on model aviation activities. The personal loss I've seen at the hands of these scum is indescribable...

Mentor
#7
I've written to both congressmen from WI as well as my representative. I've also written to the FAA, but I doubt they care. I will continue to fight the stupidity until the rules are changed, which hopefully will happen soon. I hope everybody able to will join me in fighting against the FAA criminals. It's going to be up to us. FT has a business to watch out for, so I can understand not wanting to get sunk, but we (the FT and RC community) will fight this.

#8
The thought of this registration process really sickens me. I was up most of the night thinking more about it, and it angered me more and more. I thought that we lived in the land of the free and where you are innocent until proven guilty! Through this registration process, I feel like they are putting serial numbers on us as if we are inmates that have already committed crimes. With this new process my modeling RC aircraft requires more accountability than the firearms I own. Branding us and labeling us in society like this, in my mind is ridiculous! They are saying they are promoting safety, however I believe they are scaring us to learn the law with the outrageous $27,500 fines. This is not the way to establish safety or learn laws. It will scare people out of the hobby. Who wants to jump through these kind of hoops for a hobby? I am also surprised how many people (liberals) are so quick to want to be regulated like sheep and let the government or FAA take care of us! Even though the RC modeling community was growing, we are still a minority group with not much voice in the grand scheme of this country. Therefore we will be taken advantage of in this manner and I think it will continue to get worse before it ever gets better. These knee jerk reactions seem to be the way of the future.
You must log in or register to reply here.
Share: Facebook Twitter Google+ Reddit Pinterest Tumblr WhatsApp Email Link
Menu
Log in
Register