#1
For a long time I’ve wanted to build an F-106, and thought it was finally time to pull the trigger. I have a larger fiberglass F-106 edf kit on the shelf, but I’ve wanted to fly a smaller version first to get used to the shape in the air, and have something to mess around with before I fly the fiberglass bird. Hoping to have it finished up this week for Flite Fest TX, but it will be close!

The base of this project ito build a DTBF- Balsa hybrid build based on the Dan Savage F-106 kit plans. I had eyeballed this kit a few years back but never pulled the trigger before it was discontinued. Now, the plans are available publicly: http://savagelight.com/F-106/docs/F-106Plans.pdf. I scaled up the plans by about 10% to get a bit lower wing loading, and am making a few modifications to make the design more suitable more DTFB.

72 sheets tiled and taped together: 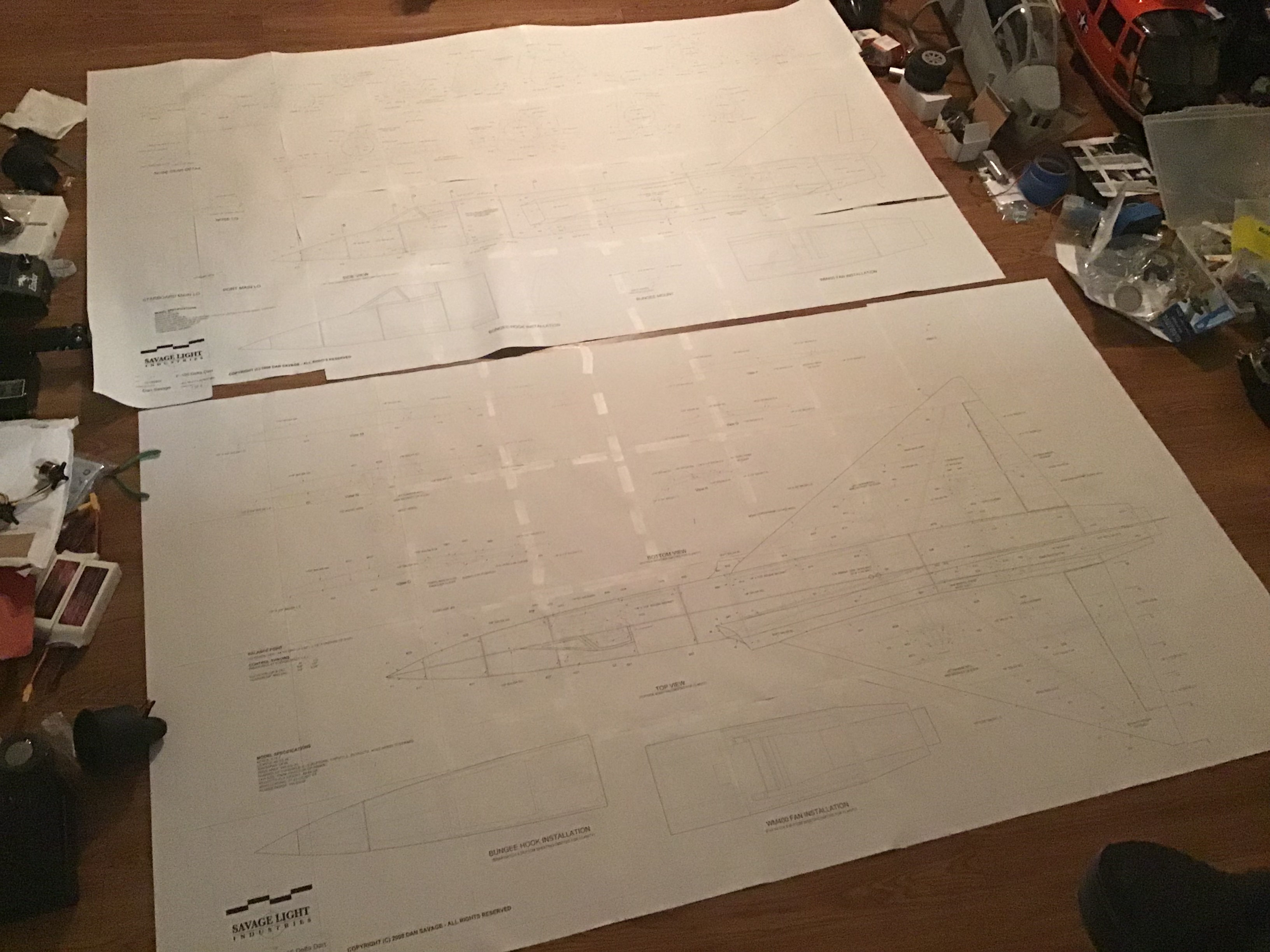 First, was the wings. I decided to keep most of the internal structure of balsa. The spar is 1/4” balsa, and the trailing edge has a balsa strip for mounting the control surface hinges. Also used some 3/16 plywood to create retract mounts. The retracts were leftover from an old Durafly Sea Vixen, and fit the size and length requirement perfectly 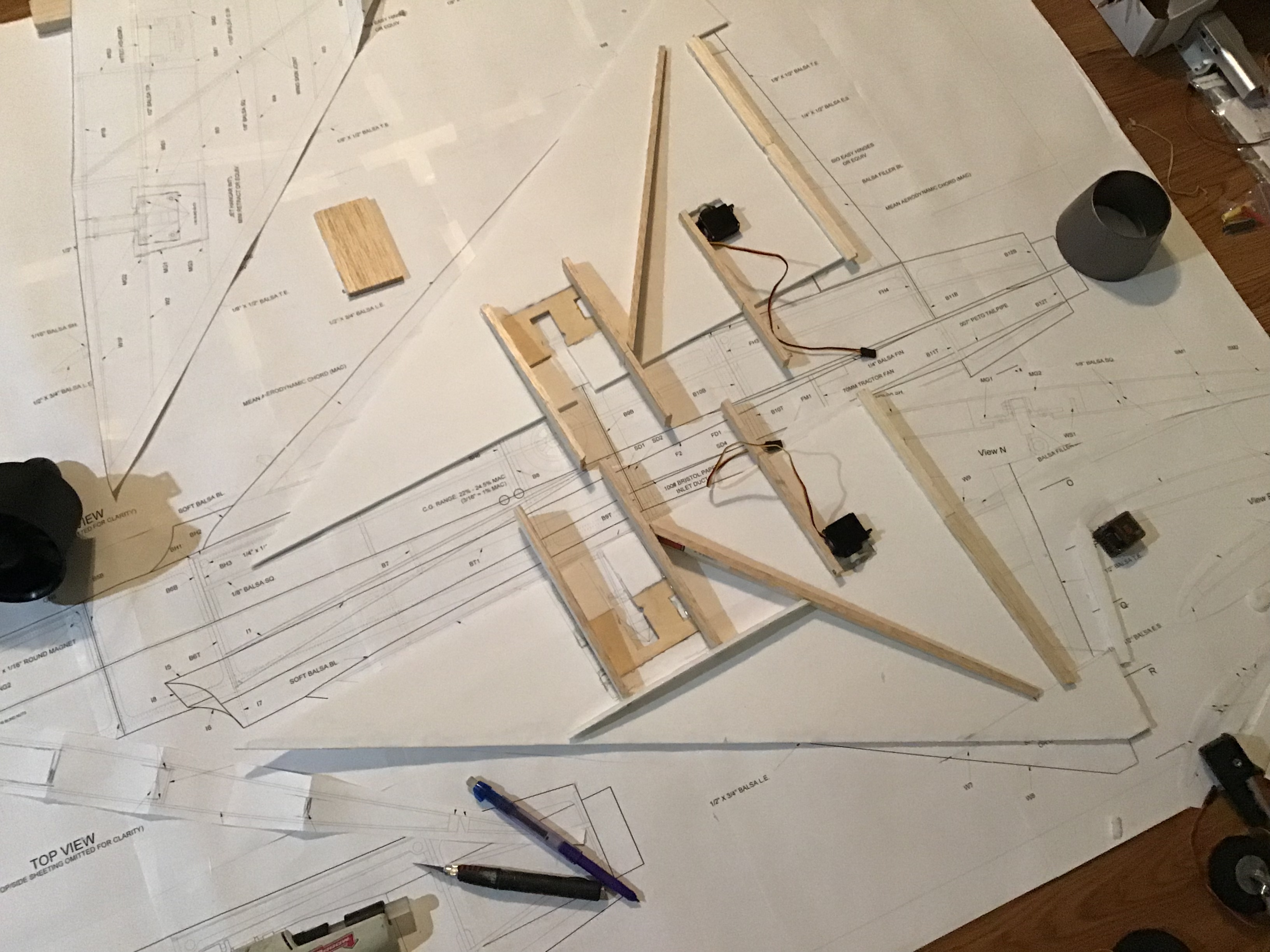 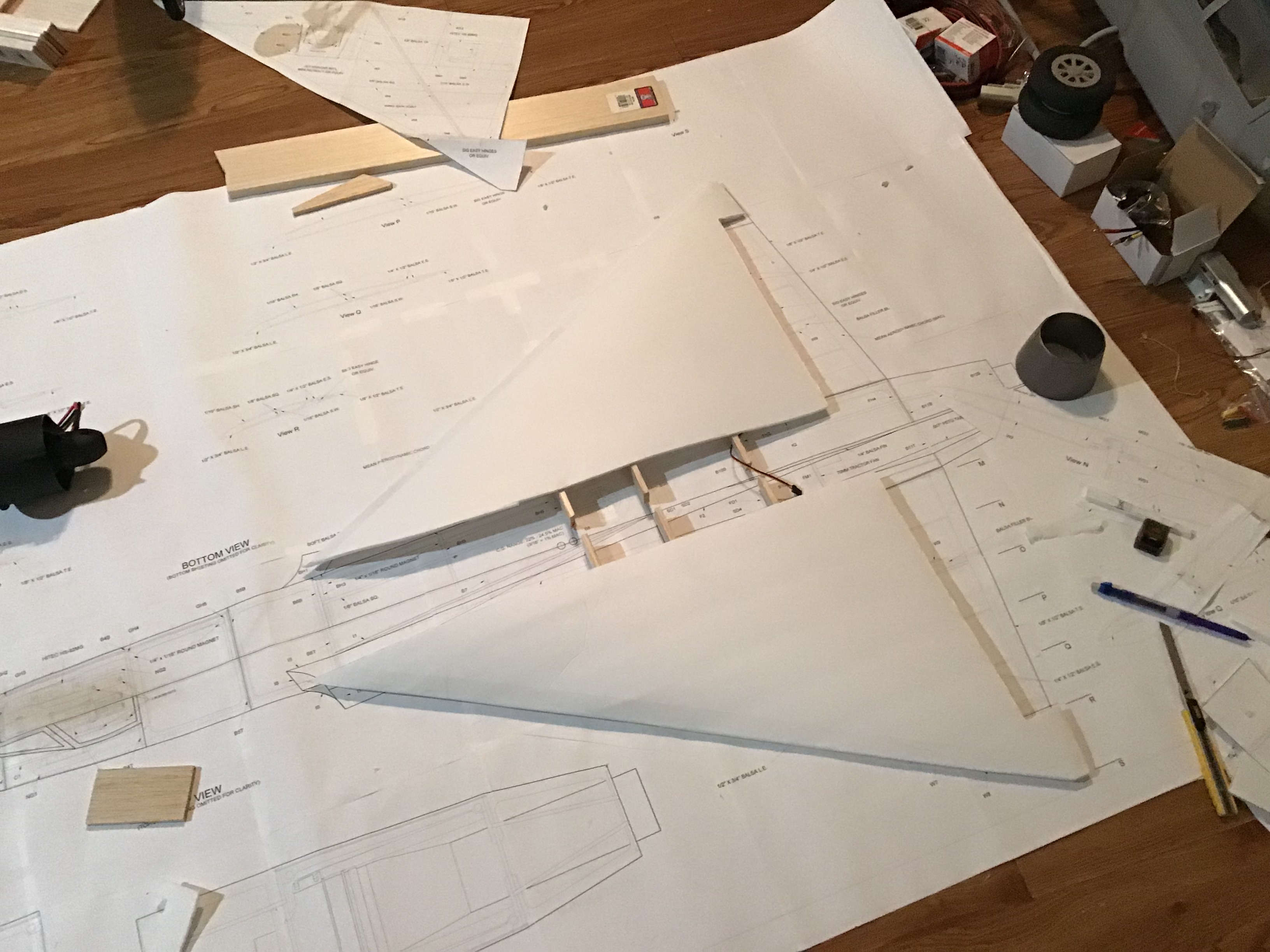 Next up is the fuselage. The keels were it from 1/4” balsa, and will hold together the fuselage formers. After cutting the formers, the plane is starting to take shape! 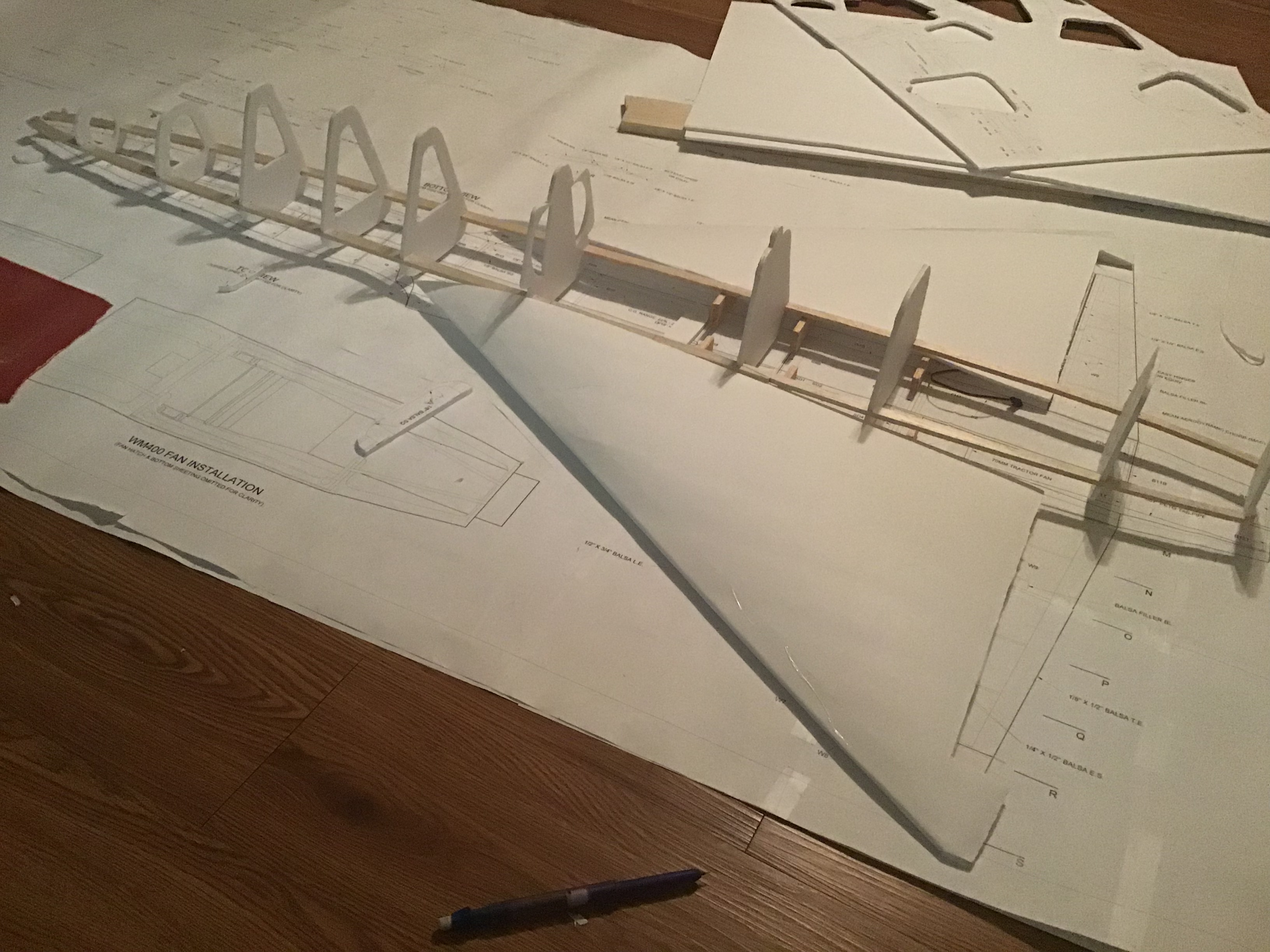 Next up will be starting sheeting on the nose, and mounting the nose retract. More to come soon!

#3
Thanks man! Spent most of tonight getting the nose retract and steering squared away, and just barely got a start on the sheeting. Shooting for fan installation and ducting tomorrow! 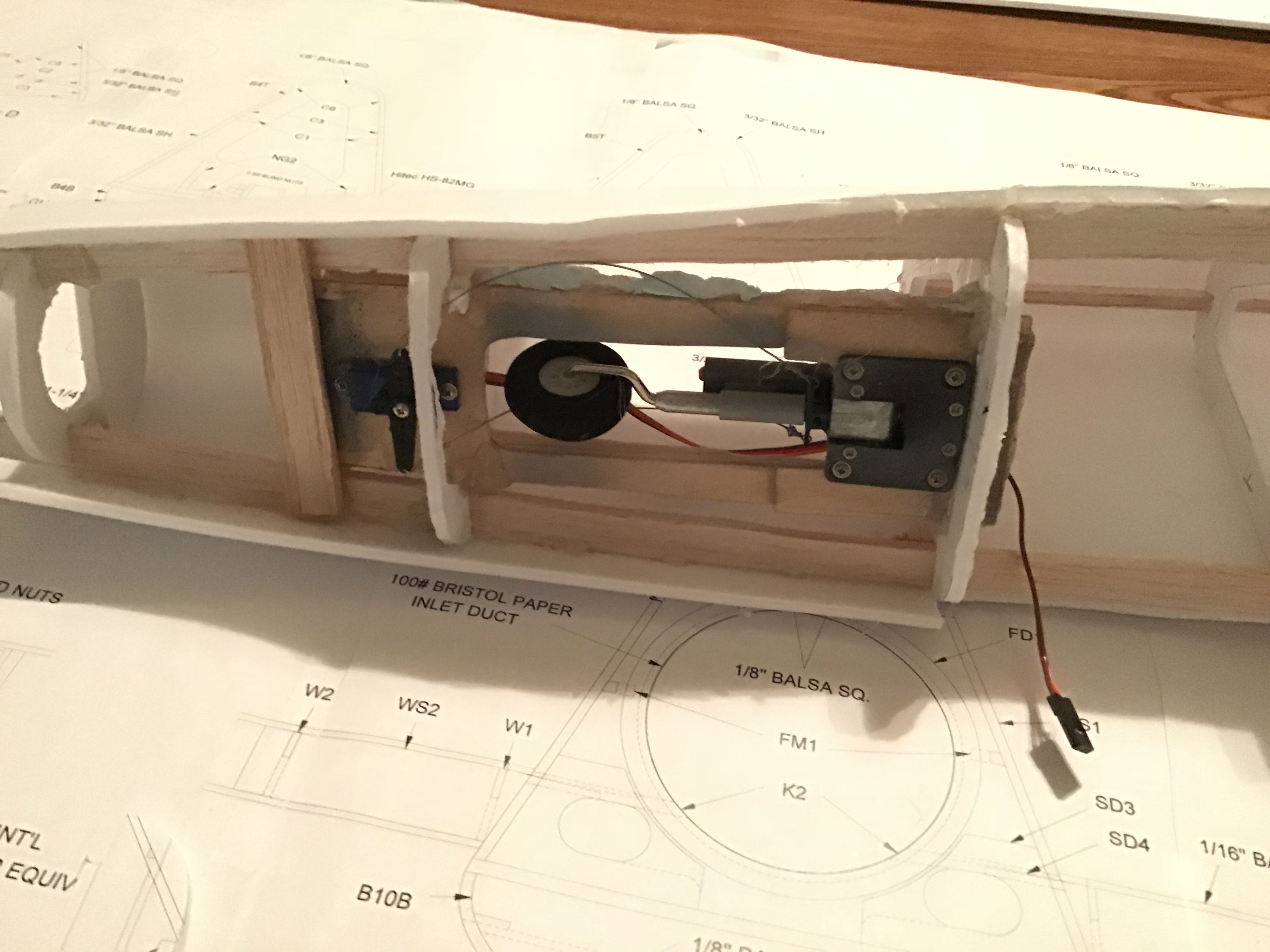 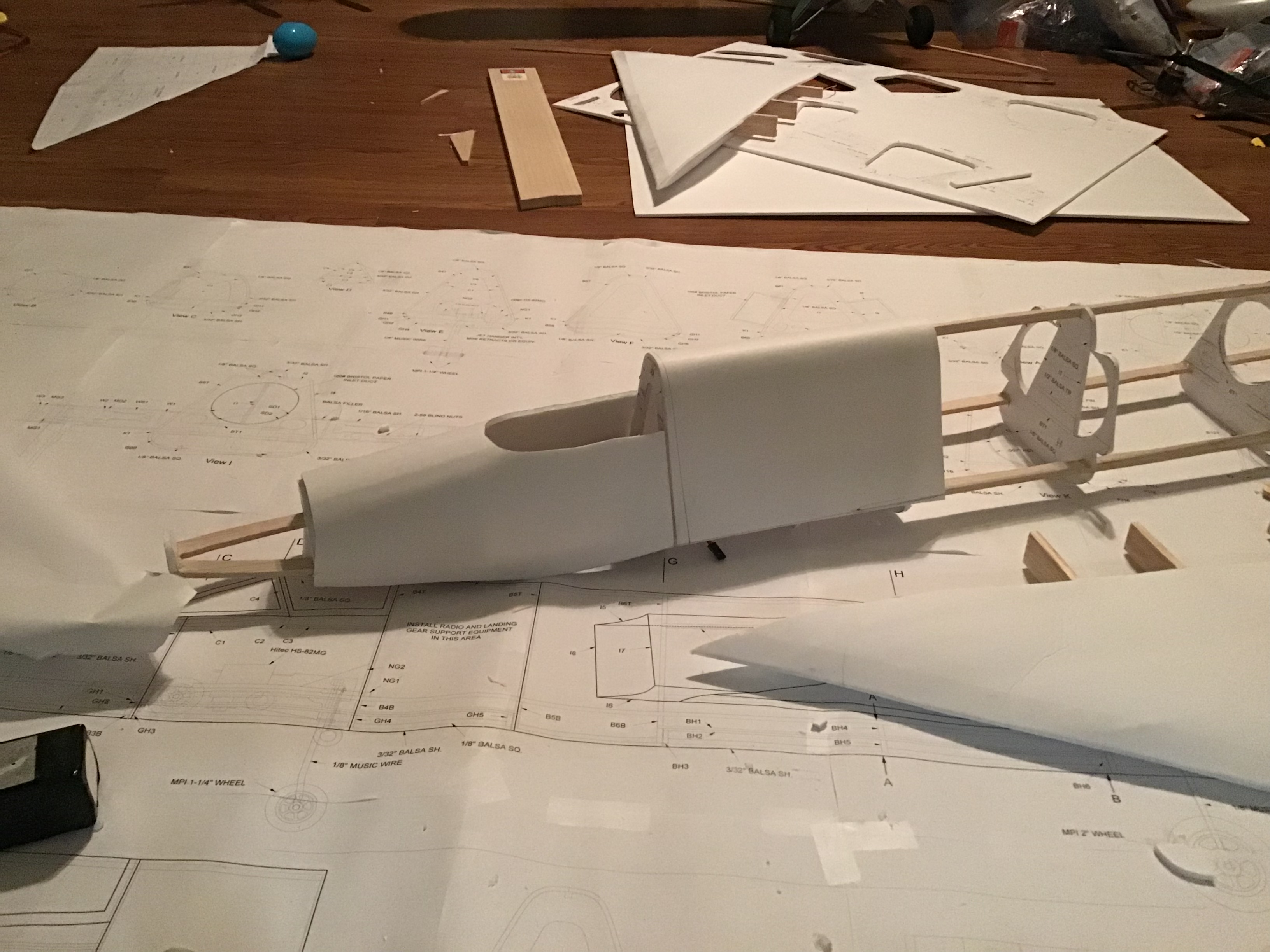 #4
Love it! Looking forward to see her finished.

#5
Getting closer! Edf is mounted, vertical stab completed, and ducting is almost done! 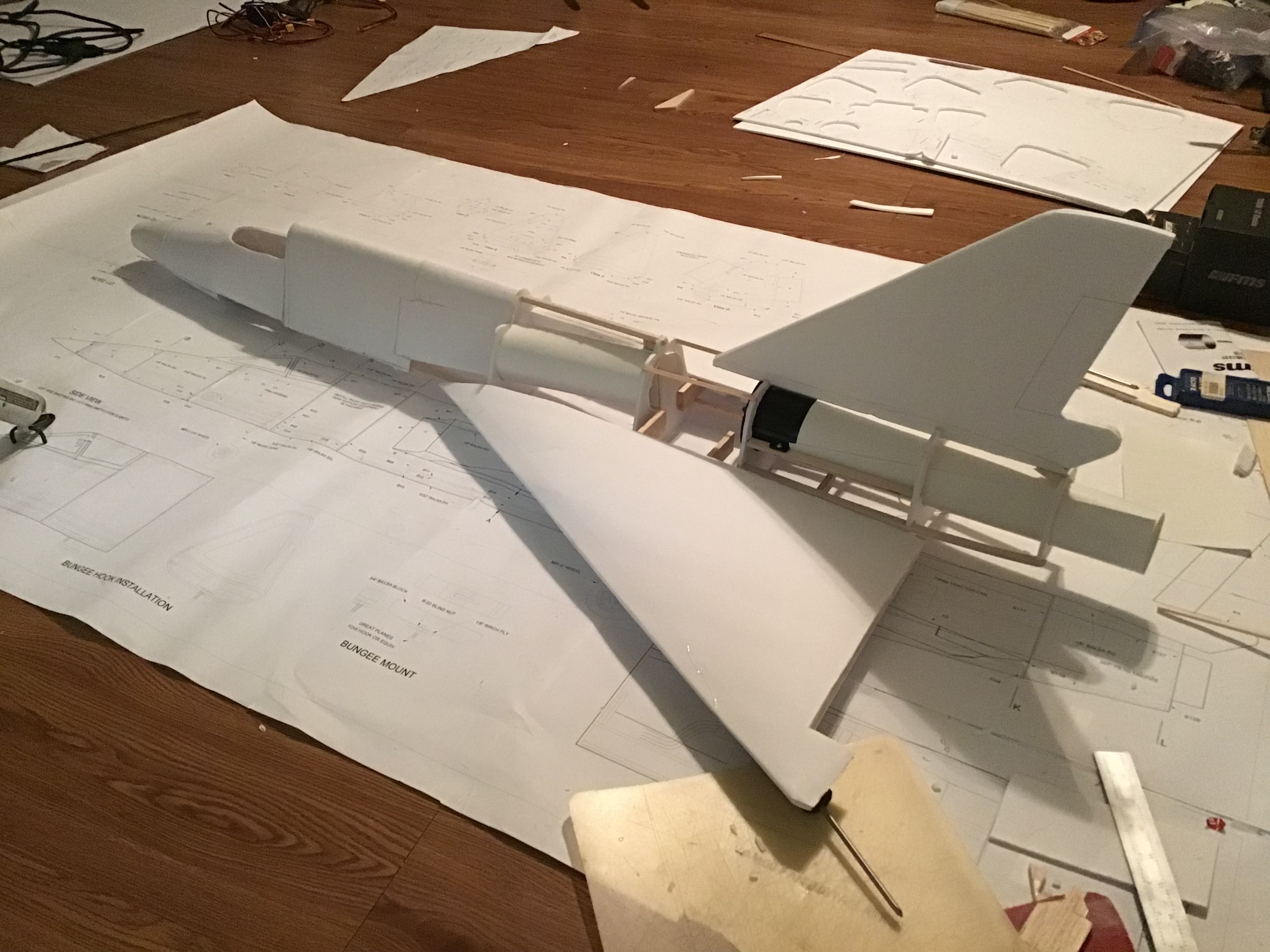 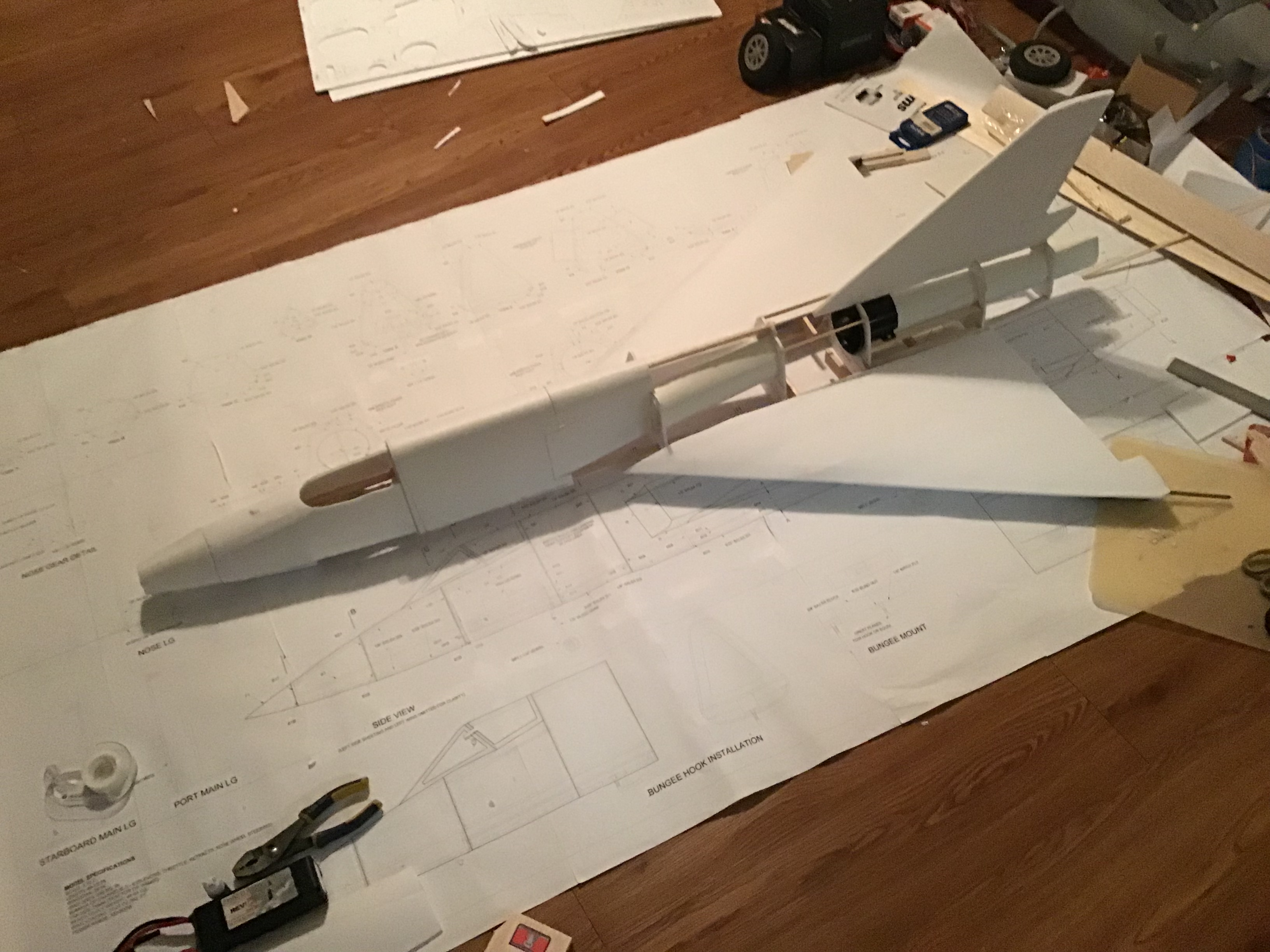 #10
Thanks guys! Almost there.. will have to finish at Flite Fest tomorrow. 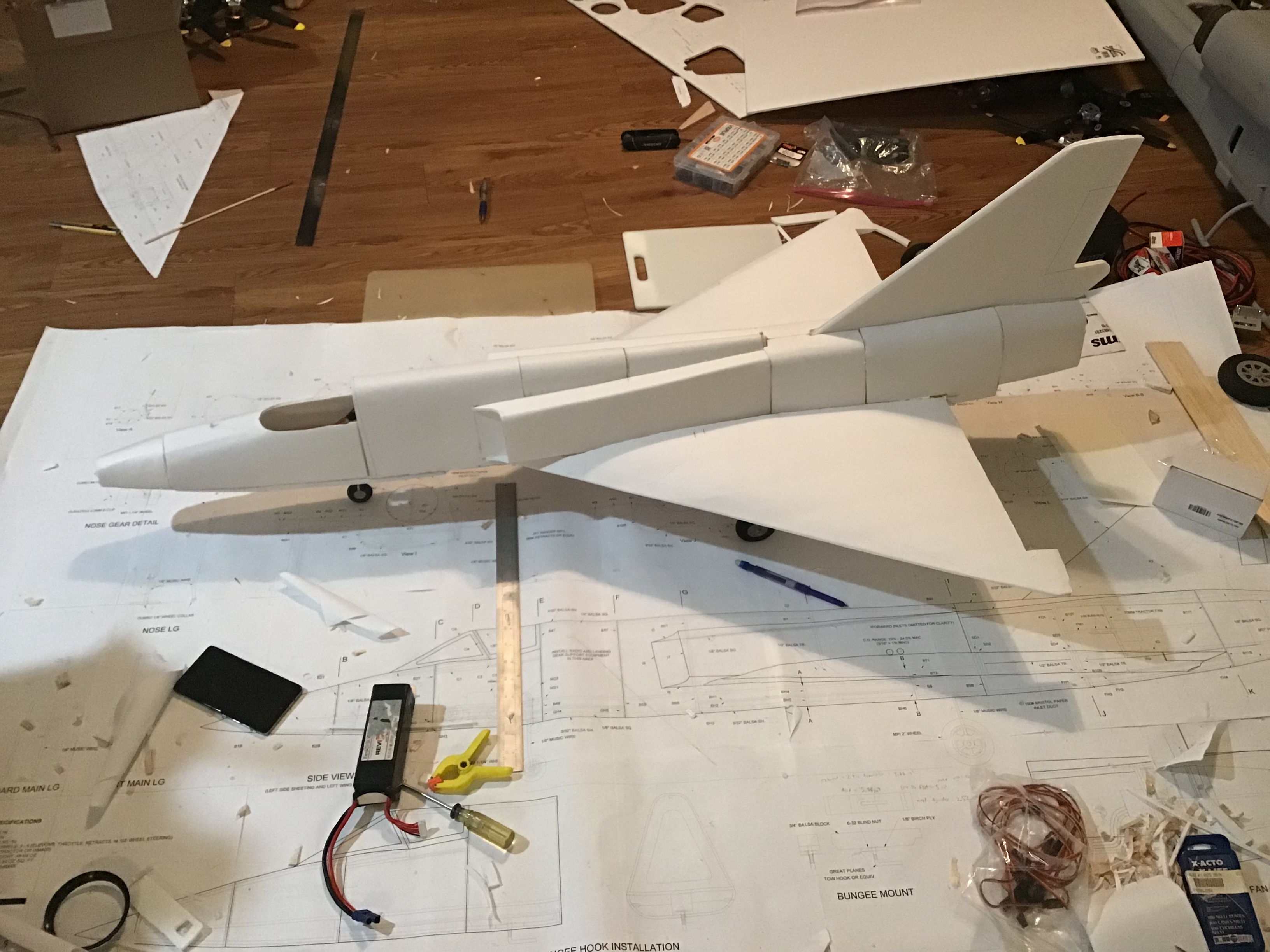 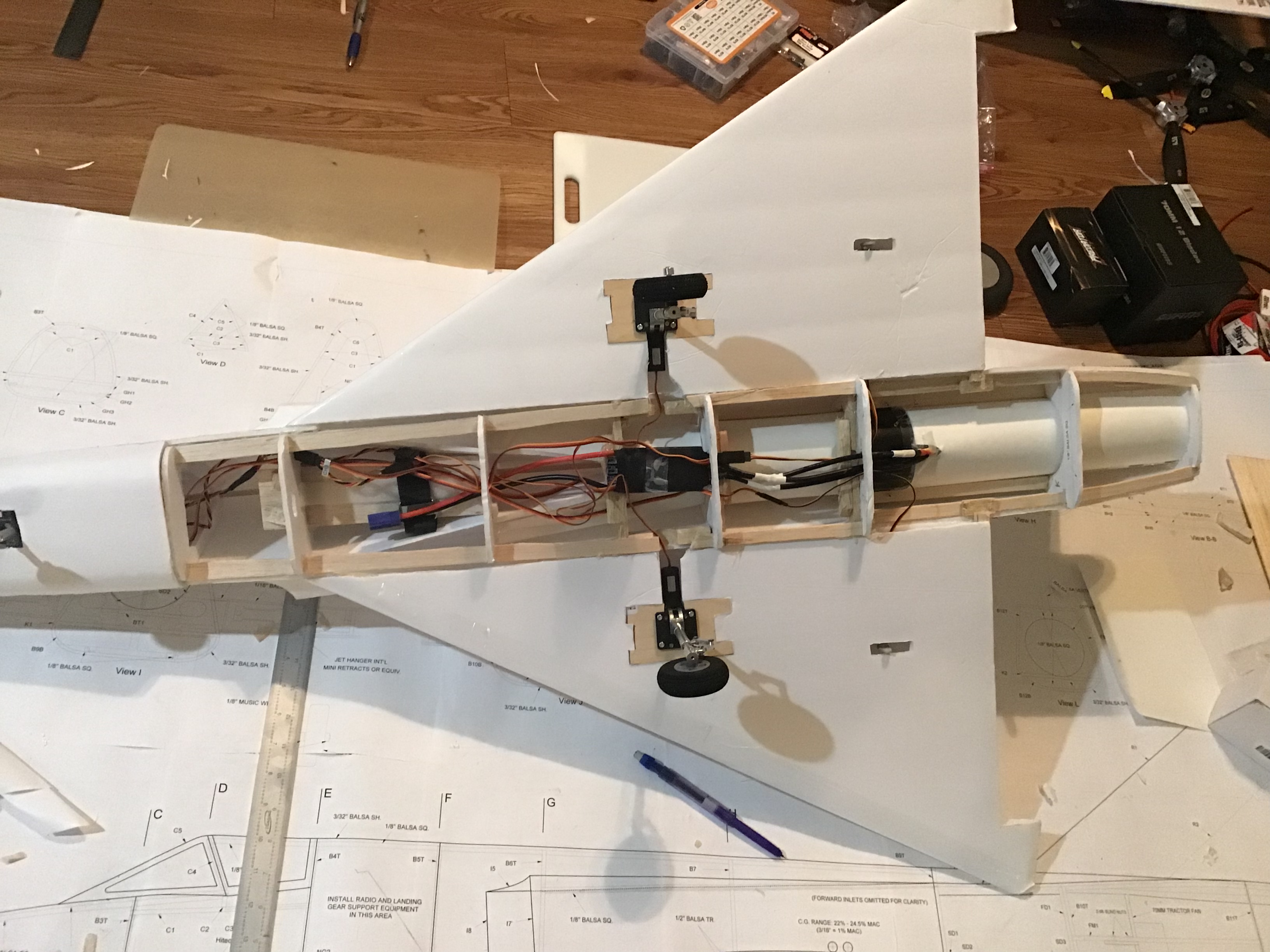 #11
A couple of updates.. Flite Fest was awesome, and I had a fantastic time there! Spent Friday in the build tent getting the 106 finished. By mid afternoon, she was balanced and ready to go. After a taxi test, I confirmed it couldn’t get enough speed to rotate flying off grass, so I opted for a hand launch. Josh Orchard gave it a great toss into the wind, and it glided fairly gently to the ground. On the plus side, it showed that the CG was pretty good, however it didn’t seem to have as much thrust as I anticipated.

Looking down the inlet, I found the problem. The suction from the fan was buckling the the sides of the poster board ducting. This constricted flow, and was starving the edf. By Saturday morning, I had two solutions worked in. I reinforced the inlet ducting with a balsa support and added a cheater hole to provide some pressure relief. Again, a taxi was tried, but still no rotation. My friend Tom gave me another launch, but this one didn’t go as nice as the first. He accidentally put a bit of spin on it as he threw, and it went sideways into the ground and severed the nose section off in front of the wing: 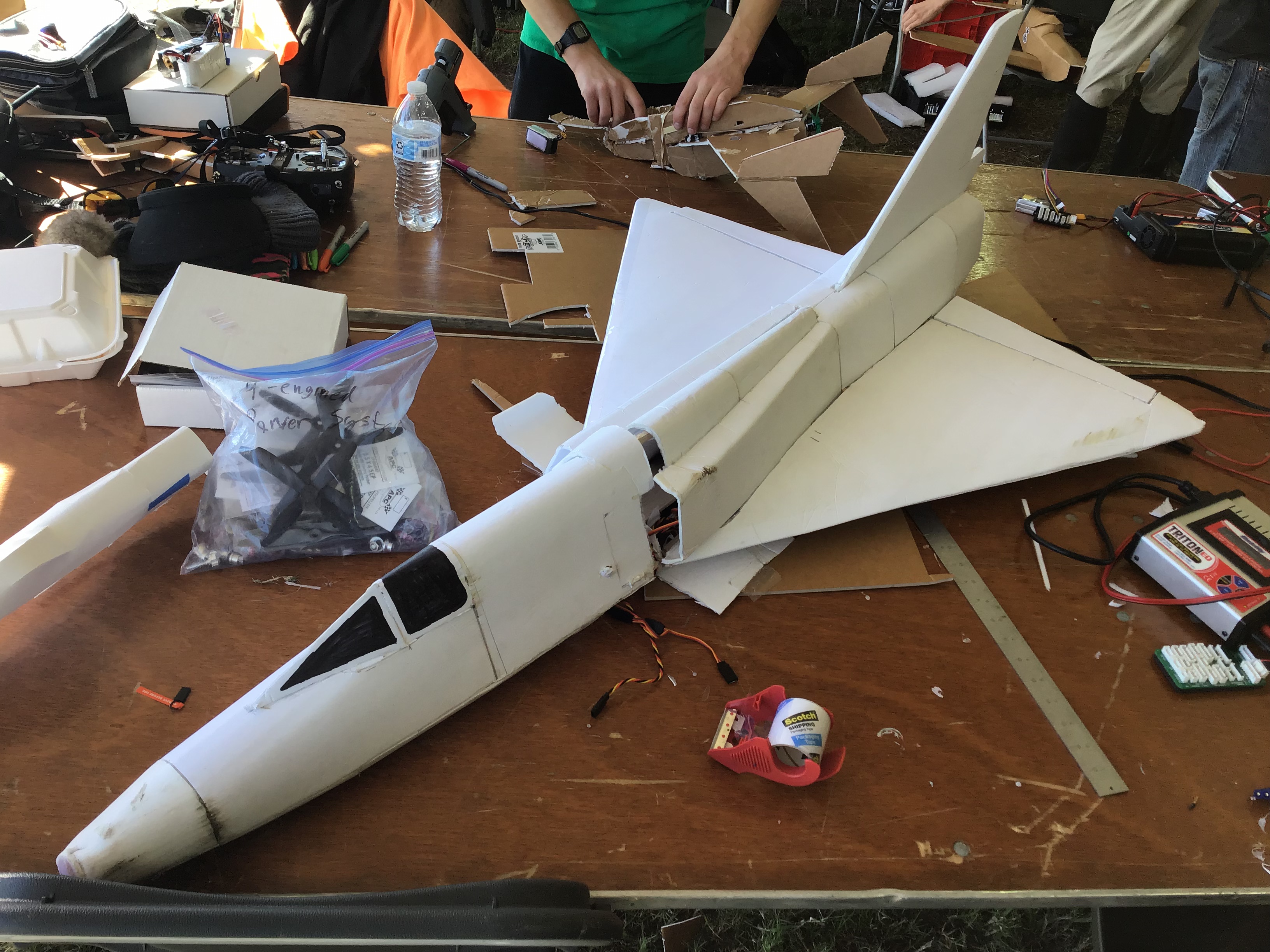 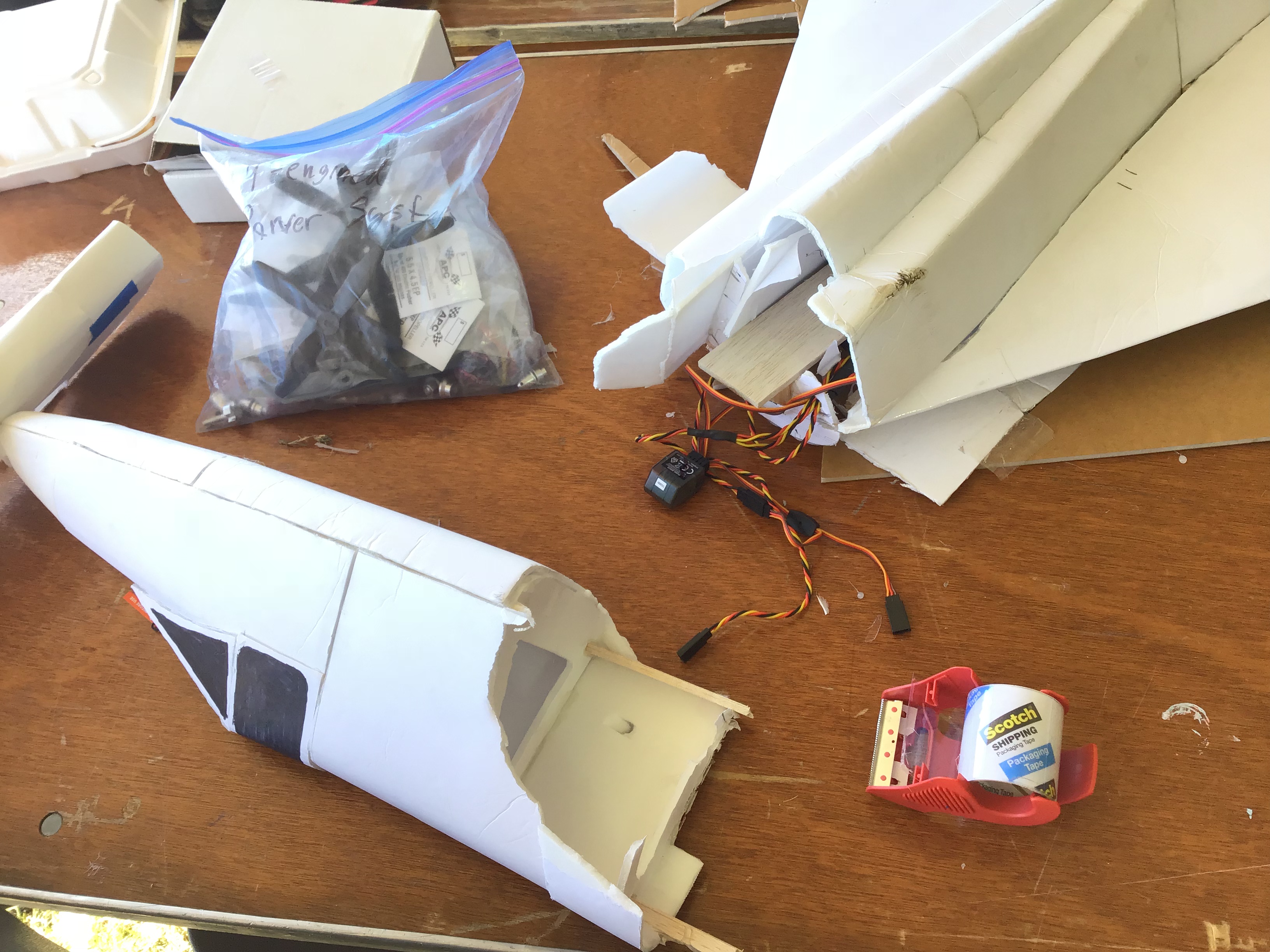 At first glance, looking over the carnage, it seemed like it was too badly damaged for a simple repair, and I was ready to write off the aircraft. After I got back from Flite Fest, I started digging into the wreckage a bit more. Pretty much everything aft of the wing is undamaged, outside of a section on ducting. I’ll have to re skin the forward fuselage, but it will definitely fly again. This time I think I’ll opt for a runway though! Thanks to all those who said hi at Flite Fest! Was awesome to meet you all and put faces to names!
You must log in or register to reply here.
Share: Facebook Twitter Google+ Reddit Pinterest Tumblr WhatsApp Email Link
Menu
Log in
Register