A down spout glider design

I designed this glider using the aluminium down spout as the fuselage. I like to post it here for your review and suggestion on how to improve on it.

The reason that I have chosen the aluminium down spout is because it gives me a lot of room for my battery and electronics so that if I would like to add a flight computer for autonomous flying or an additional Rasberry Pi for some AI target recognition then that is possible. The aluminium is also quite rugged and light so that if there is some accident on landing then it wouldn't break up.

The good news is that it flies but seems a bit under power in a windy day. Here is a video of its maiden flight
At the end I think it may be a little bit too heavy to be a glider (1377g) and its motor is a little bit too weak to be a plane (340W). So I would like to hear from flitetest members on how it could be improved upon. This is my first build so I would like to learn how to be a better builder.

The good thing is that it is very easy to build and you can find most of the building materials around the home.

The design goals for Solar seeker:

Wing Design Calculation:
The wing is perhaps the most important component of the plane. I used the following calculation and guide line. 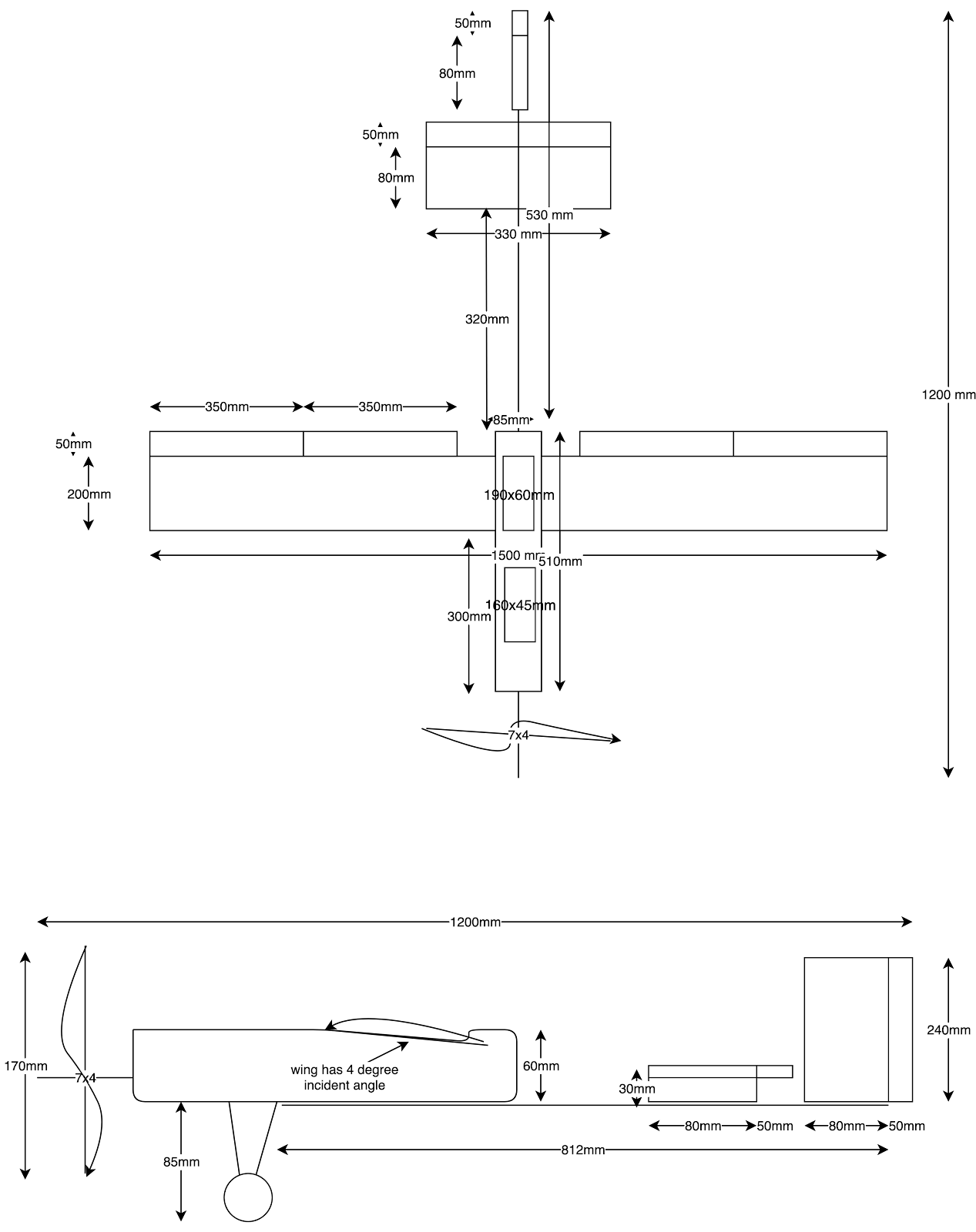 Given the power requirement, the following motor/ESC combination is chosen where the max power is 342w which should work:
abcGoodefg RC 2200KV Brushless Motor 2212-6+ with 30A ESC Set

Servos:
There are a total of 6 servos were used:

Transmitter and Receiver:
The transmitter and receiver used were from Radiolink. These tx/rx support 12 channels. 6 channels are used to control the servos, there are still 6 channels left for various mode setting and configuration.
Note: the prevalent Transmitter/Receiver used in RC plane are from Spektrum. There is also a huge price difference. For example the Radiolink 12 channels costs only $158.99 whereas the Spektrum 8 channel DX8 is already $379.99. So far I have not seen any performance difference yet.

Wing build:
The wing is built from Dollar Tree Readi foam boards. The wing design is the well known ARMIN wing. A youtube video can be seen here.
Flight control system and AI:
TODO: the plan is to use the Matek F765 to implement the flight control system for the automated glider. The Flight Control system will be connected to a Rasberry Pi 4 where additional computing power for AI and target recognition can take place.


Some Build and Design Remarks:
I began to build Solar Seeker on May 10, 2020. The built was done on a part time basis and there was time idle waiting for the parts to arrive. So it took me about 14 days to complete it on May 24, 2020. In reality if all the parts are available then it may only take about 3 days to complete.

Solar Seeker had it maiden flight on May 31, 2020. It was a very windy day with wind blowing at about 15mph. Although it wasn’t recommended to do a maiden flight in such a condition, I went ahead and did it anyway to see if it works. The plane did fly but it was clearly under power. The motor power was chosen to be 340W, I think a 1000W motor would fit it better. Also the motor KV was chosen to be 2200KV which was supposedly for a faster plane of speed around 140km/h. Perhaps a motor with 1000KV that has a speed of 70km/h would had been more appropriate for a glider.
Last edited: Jun 9, 2020

#2
Ingenious idea using the downspout. You could drill some holes in it and cover them with packaging tape to make it lighter. If you haven't already take a look at Experimental Airlines for some basic fuselages. Basically he uses a foam downspout. I've found if you reinforce the foam square/rectangular fuselage with full length bamboo skewers and use a solid plywood firewall it is virtually indestructible. If your interested let me know and I'll send some pics. oops, it looks like you're well aware of Ed's great work.

#3
Hi and thank you for your suggestion. Yes I have seen Ed's work. I have not tried the foam tube fuselage before but I think its wall might be much thicker than that of the down spout. The advantage of the down spout is that it is very light and rugged, and it only take a few cuts to build. It has a strong rib line where you can attach the tail boom securely to the plane. I also like to watch real airplane landing so I have attached a landing gear to it and the strong structure allow it to take some bad landing. The heaviest part of the plane is the wing. I built it with a heavier wooden spar instead of a lighter carbon fiber tube. May be if there is a way to build a much lighter wing then it could make a good glider.

#4
Change the incidence from +4 to maybe 1 or 2 or even 0 using an upswept leading edge and appropriate horizontal stab shimming or up trim. Weight isn't all that much for a 4ft span slope soarer, a bit heavy for thermal but I bet it flies like my simple stick. I don't see a problem with a wood spar, a bit over kill and even more so with carbon tube.

How does if fly on a calm day?

#5
Piotrsko said:
Change the incidence from +4 to maybe 1 or 2 or even 0 using an upswept leading edge and appropriate horizontal stab shimming or up trim. Weight isn't all that much for a 4ft span slope soarer, a bit heavy for thermal but I bet it flies like my simple stick. I don't see a problem with a wood spar, a bit over kill and even more so with carbon tube.

How does if fly on a calm day?
Click to expand...
Thank you for your suggestion. I was reading some where and it was suggested to me that it is good for a high wing have a small incident angle. So that was why I have built it that way. I can test it again without the incident angle to see what'll happen. Since its maiden flight I have not flown it again. The reason is I don't know how to fly RC yet and I had to go to a fairly distance air field (about 1.5 hours from home) to have a friend fly it for me. I am trying to learn RC flying with computer simulation and joining a local club. I found that flying RC plane is not easy at all. There are many times where I just lost my orientation on left and right turn. Or lost sight of the plane altogether. It is funny but I found that flying a real plane is easier. At least I don't lose my sense of left and right and I always have a bird eye view of where I am flying to.
You must log in or register to reply here.
Share: Facebook Twitter Google+ Reddit Pinterest Tumblr WhatsApp Email Link
Menu
Log in
Register