#1
The Aero L-39 Albatros is a Czechoslovakian high performance jet trainer developed in the 1960's. The L-39 has served with over 30 air forces around the world, and is the one of the most widely used trainers. Today the L-39 is used in the Reno air races jet class, flown by demonstration teams such as the Breitling Jet Team of France, and are privately owned by jet enthusiasts.

With this in mind I wanted to create a relatively easy to fly jet the was versatile and had a wide flight envelope. So after four months of work I give you the Grifflyer Aero L-39, a sport jet built out of two sheets of foam board that can be built as an electric ducted fan jet or as a pusher prop jet using standard components found in the Flite Test F pack.

Speed-
Top speed is great when built as an EDF and slows down very well for landing, if built as a pusher prop jet the top end speed drops but your static thrust is much higher giving the plane a more "trainer" like feel.

Handling-
When built as an EDF it tracks like an arrow and the controls are very smooth giving you the ability to fly like a pattern ship, but can become "snappy" and abrupt when you really start banging the sticks around. If you chose to build it with a pusher prop you'll find that it handles similar to a park flyer, but faster and less forgiving.

Stalls-
If your plane stalls it will likely drop a wing but it is nowhere near entering a spin, all you have to do is level the wings and then power out. Due to the fact that a prop jet has more static thrust your recovery will eat up less altitude compared to the EDF setup.

Take offs-
The method of launching the jet differs depending on how you choose to power it. If you built it with a ducted fan I suggest holding it right behind the trailing edge of the wing and tossing it from there. Let me rephrase that, don't give this a light gentle toss you need to get up to flying speed, because the ducted fan doesn't have enough static thrust to get it up to adequate airspeed before it hits the ground (ask me how I know) On the contrary never launch it like this if you built it with a prop setup as you run the risk of the prop striking your hand, what I do is hold it right in front of the intakes and give it a nice underhand toss and let the motor do the rest.

Landing-
Landing this model is quite simple all you need to do is bleed almost all your airspeed and get it close enough to good 'ol terra firma to put ground effect to work, then right before to hid land flare the plane and you'll "ride" a cushion of air to the ground.

Skill level-
This depends on which variant you'll be building if you want to go prop powered then I'd suggest being able to fly all four channels very comfortably, if you want to build it as an EDF then you'll want to learn how to fly faster planes. 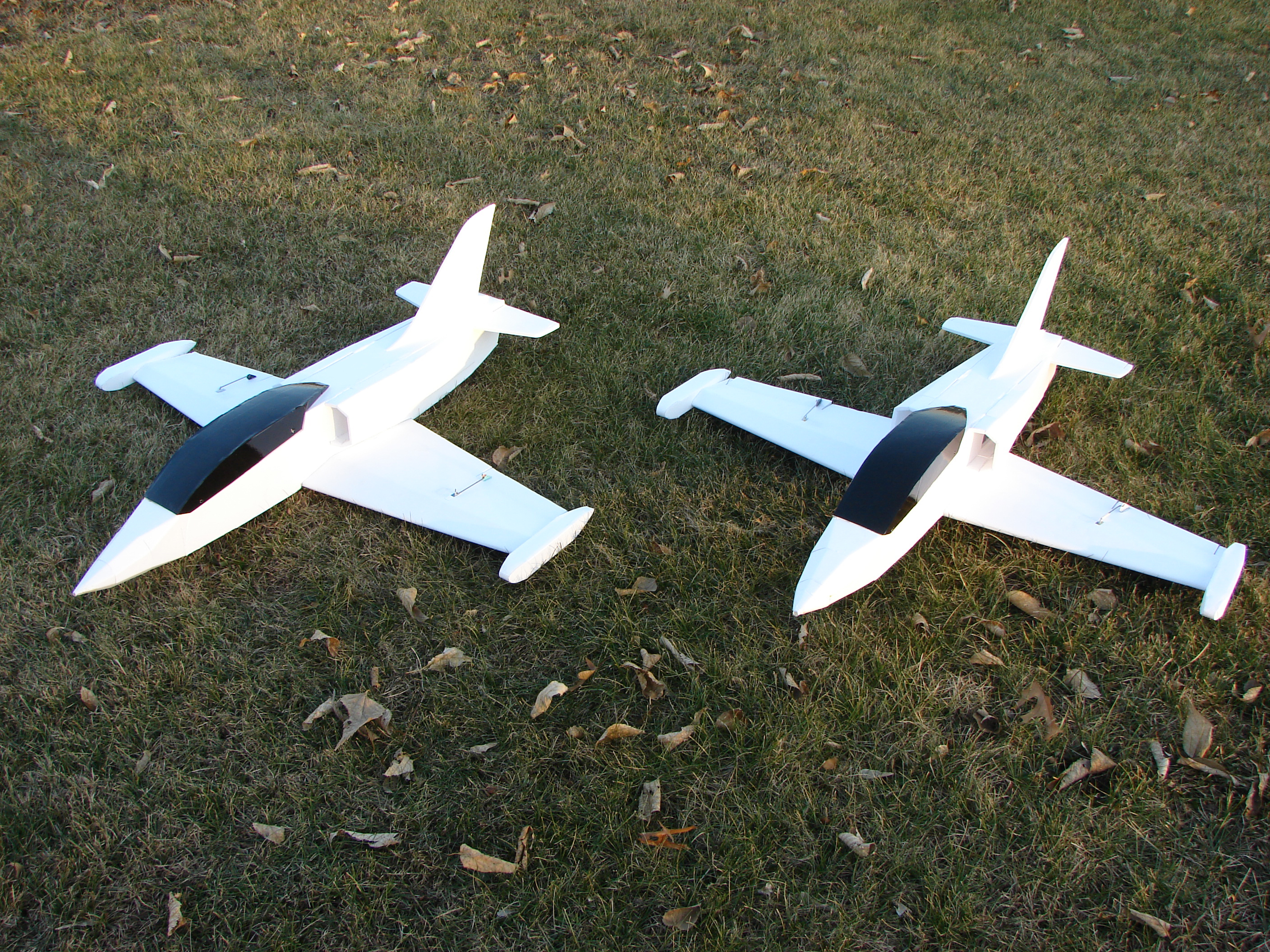 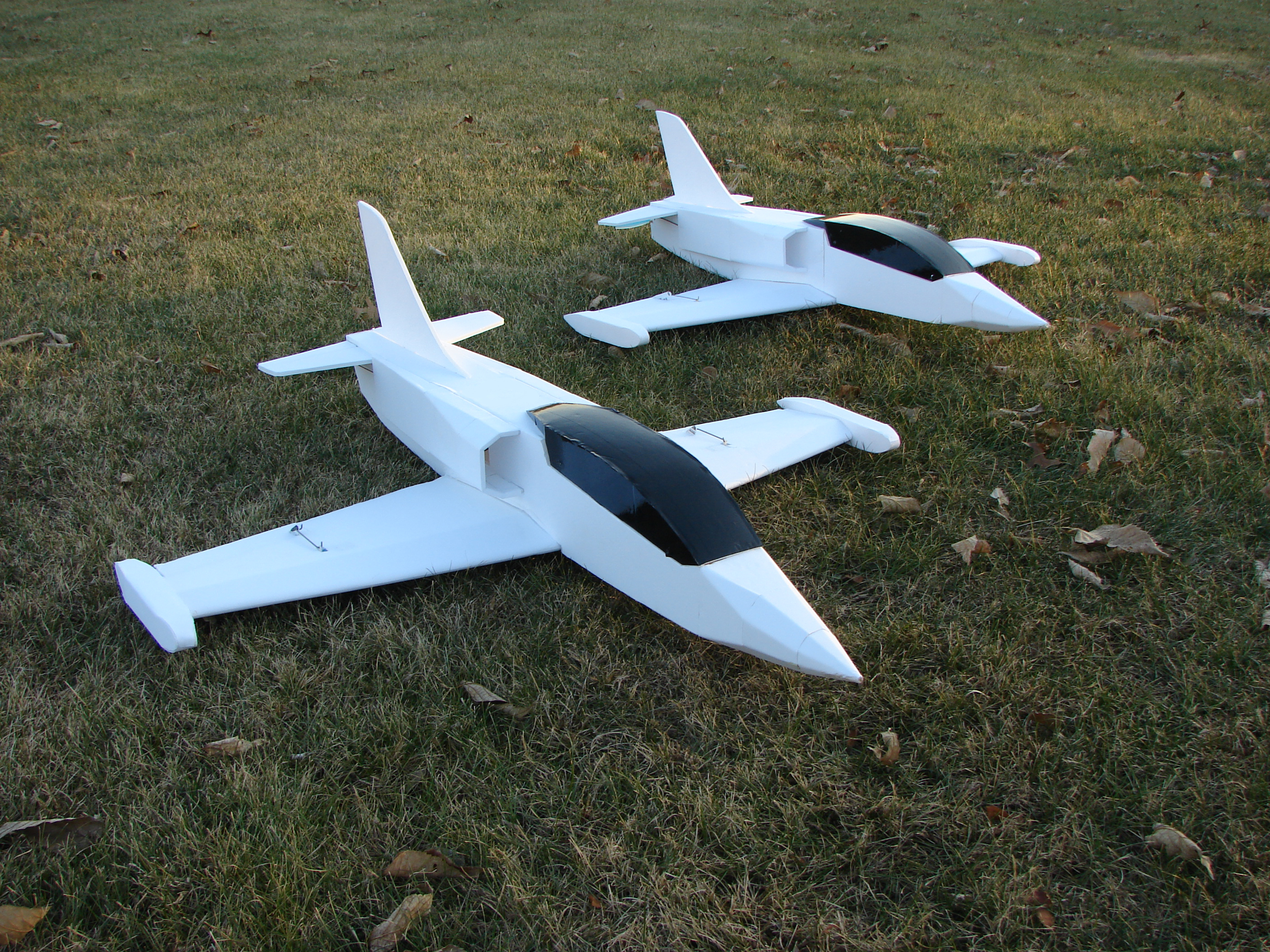 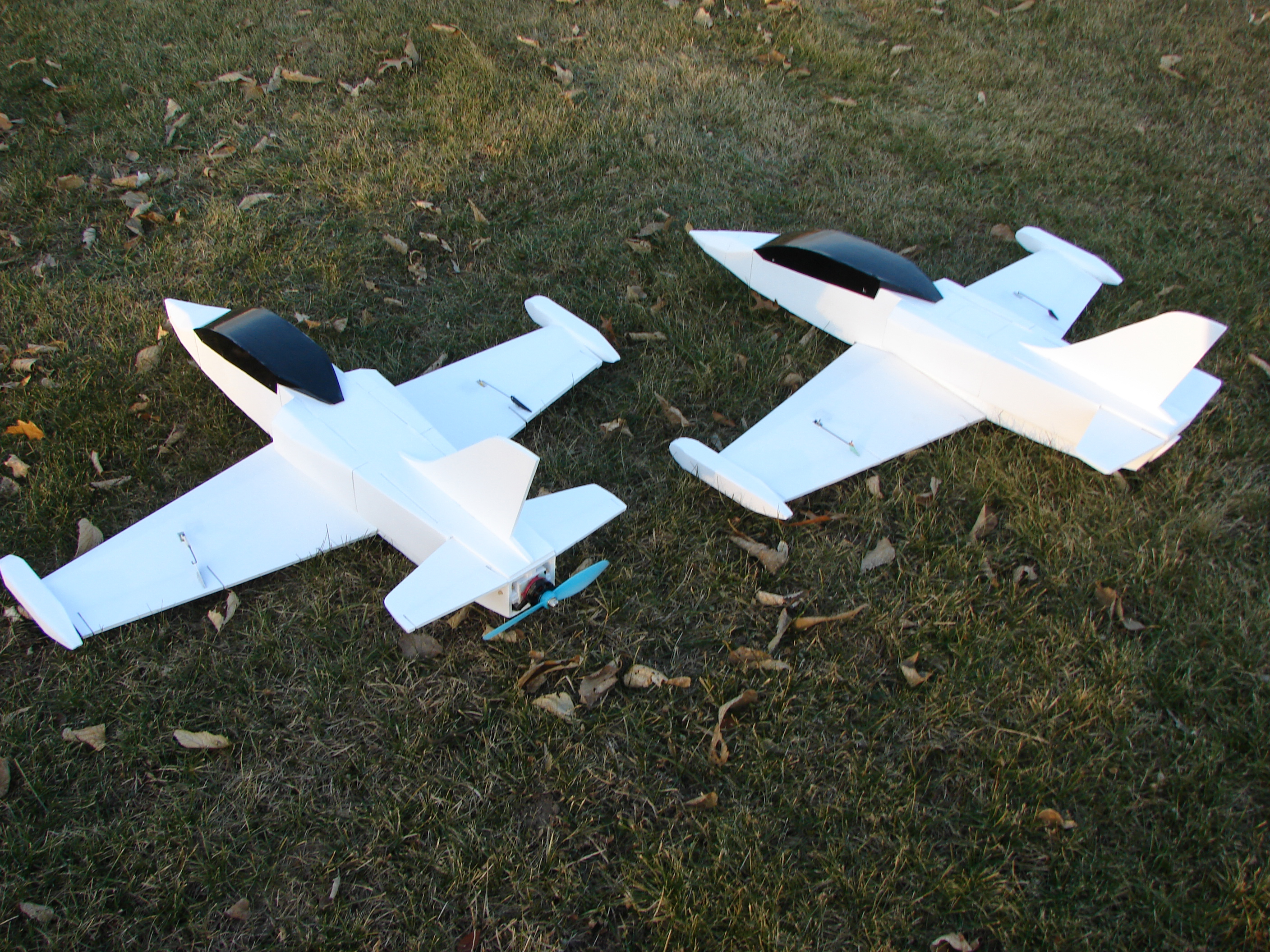 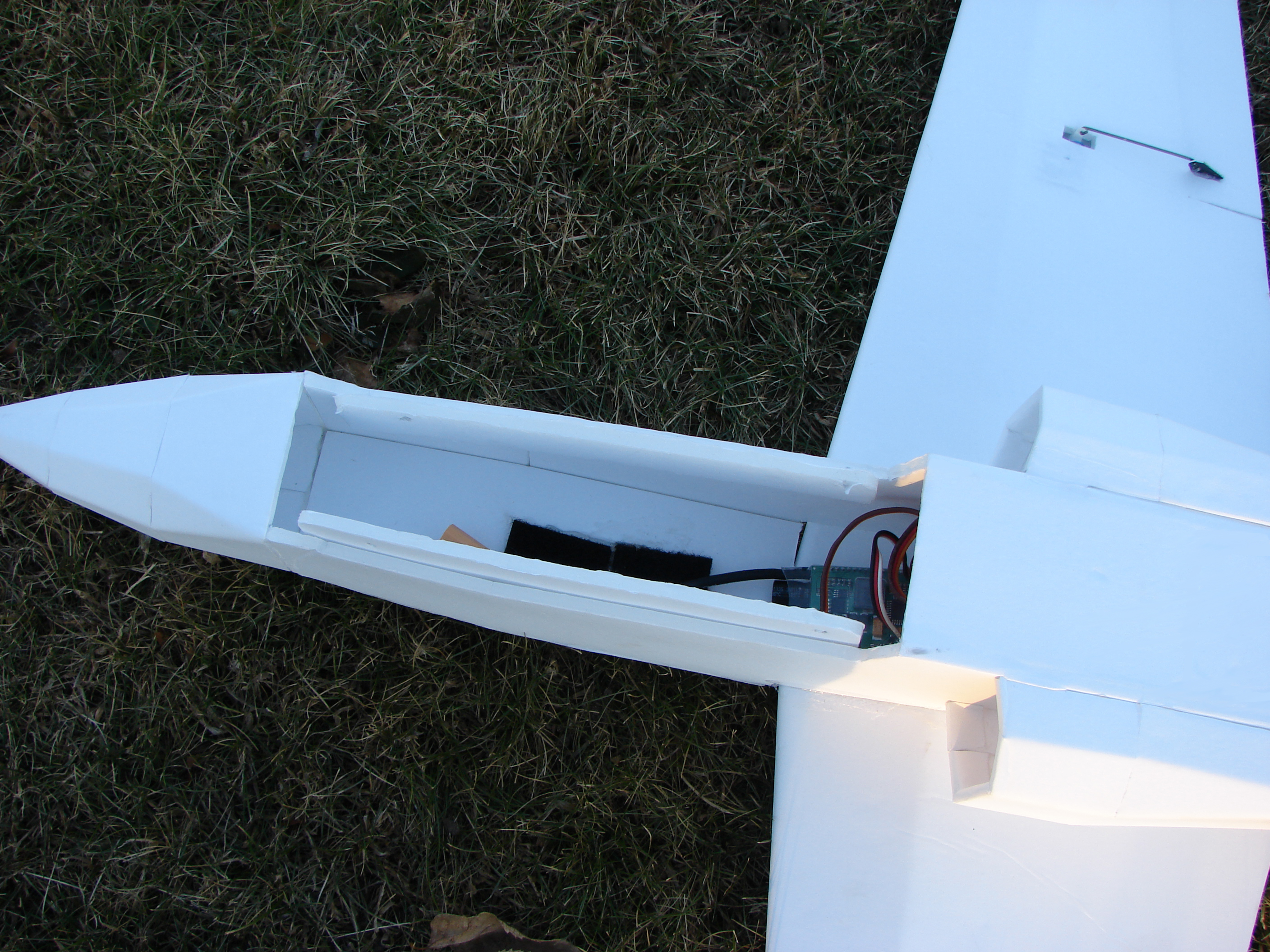 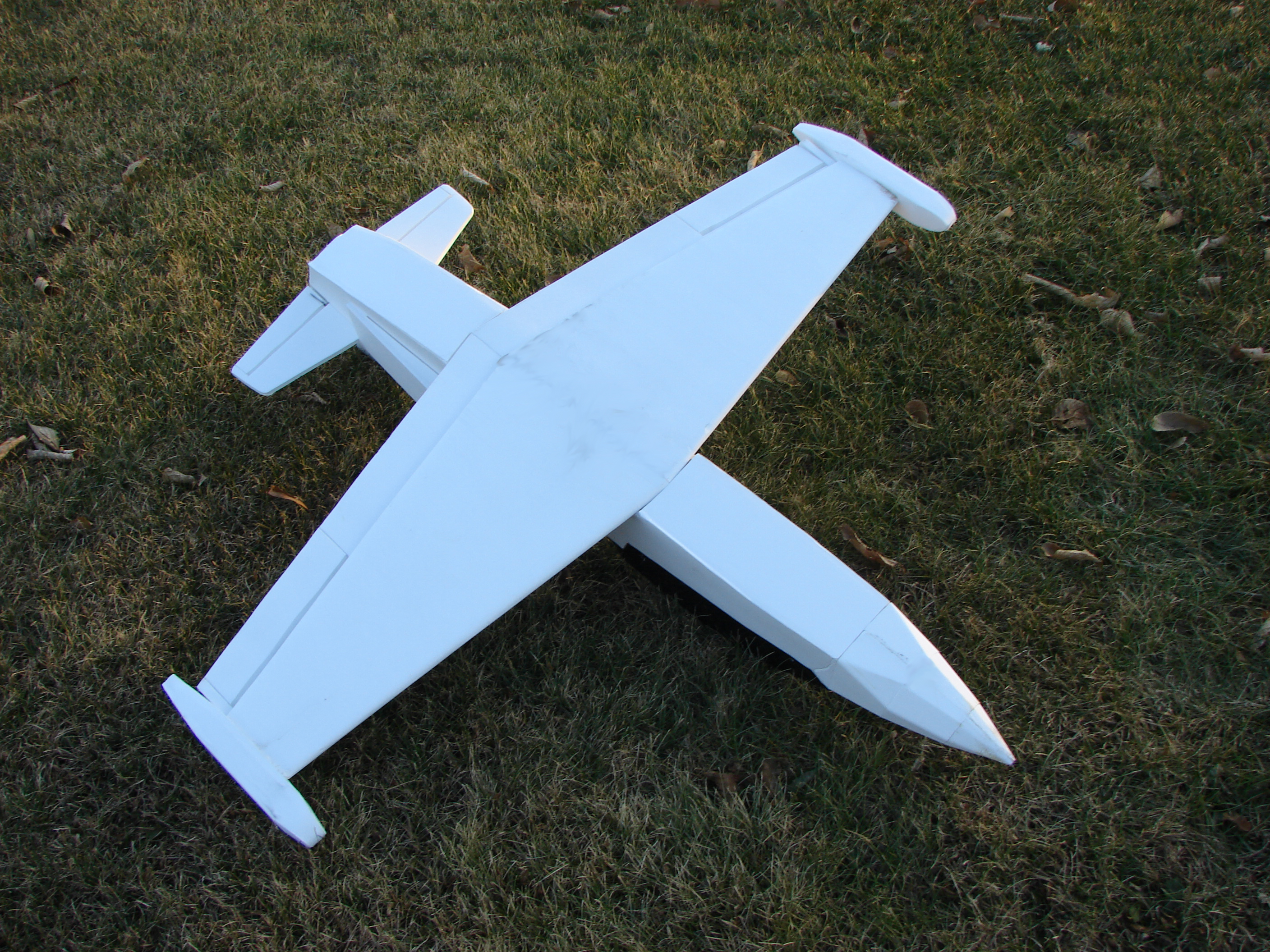 My goal is to make an EDF jet that will keep the characteristics of the full size plane, seeing how the L-39 was primarily developed to be a high performance jet trainer to get pilots ready for fighter jets. So I want to design this to be a step up from propeller powered aircraft to get people ready for faster jets with all the bells and whistles i.e. flaps, retracts, lights etc. I also want to make it in such a way that you can fly as an EDF jet or have the ability to build it to be powered by a pusher prop for those who want to build a L-39 but can't afford an EDF, or already have the parts required to build it as a pusher.

So far I've got the airframe done but I'm currently waiting on arrival of an EDF so that I can make sure it can be flown before as an EDF before I give it the ability to be built as a prop powered jet. So far I've got a few things to change 1. the wing cutouts are just a tad too big 2. the canopy fit needs a bit of work 3. the portion of the nose closest to the canopy is a little wonky. 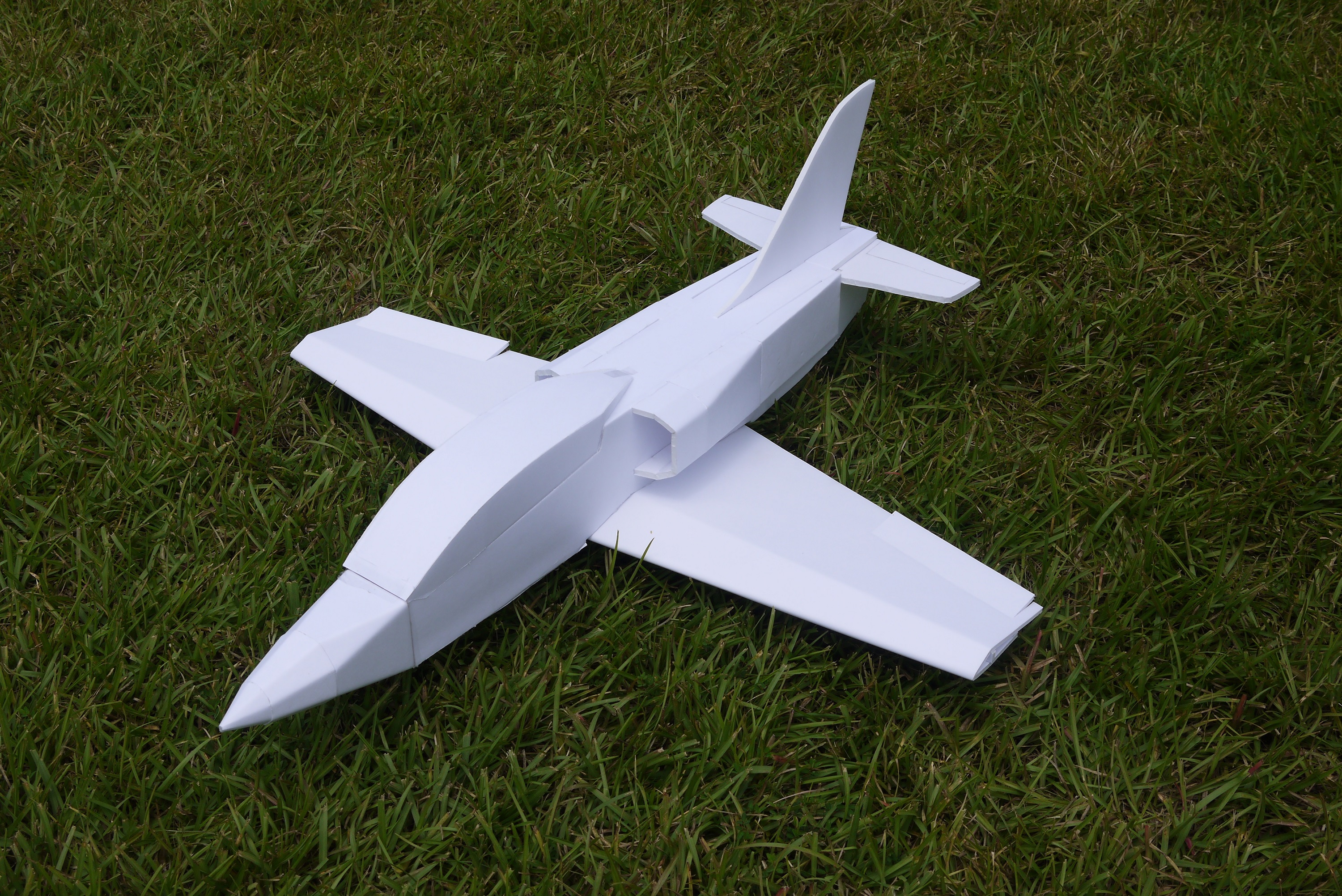 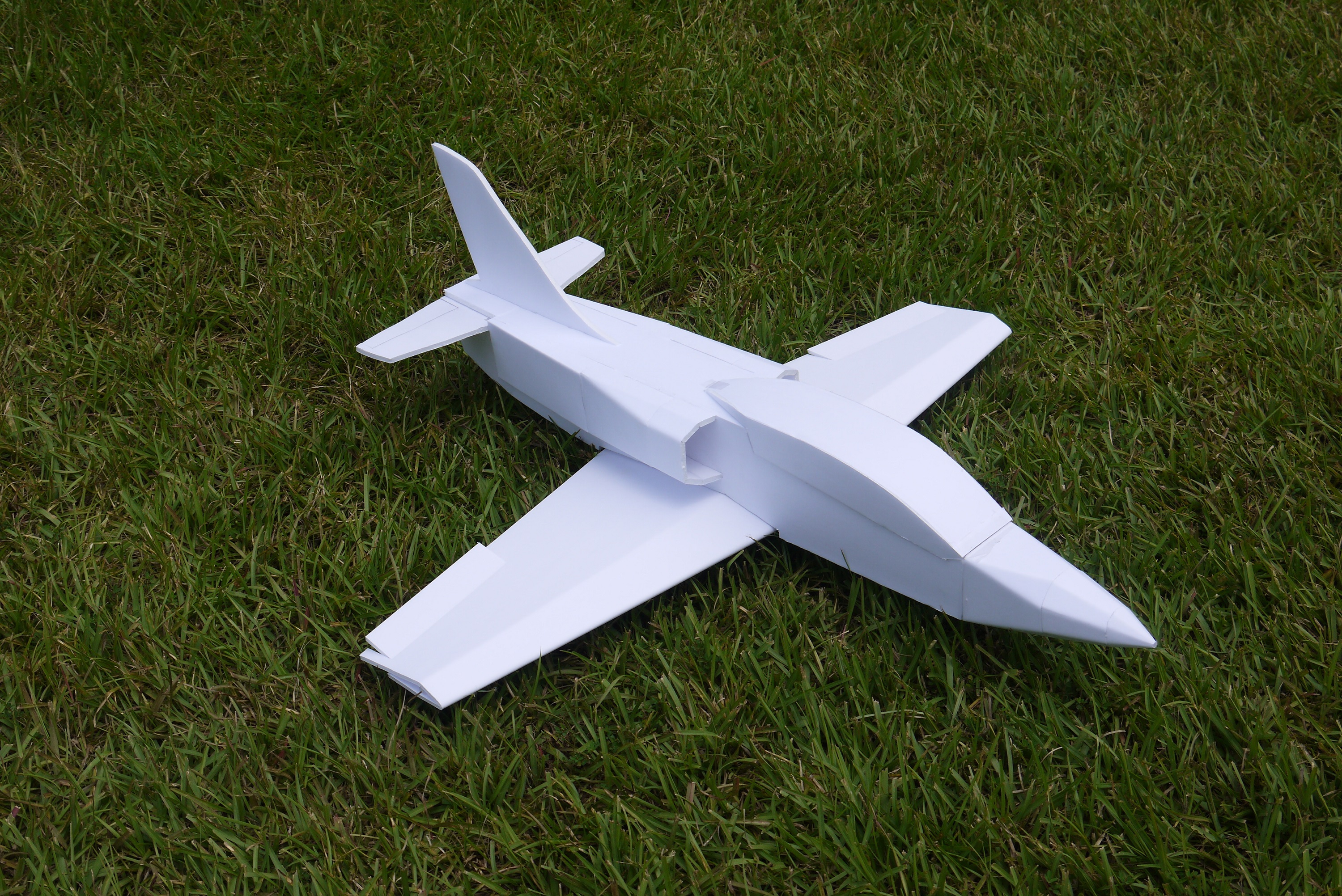 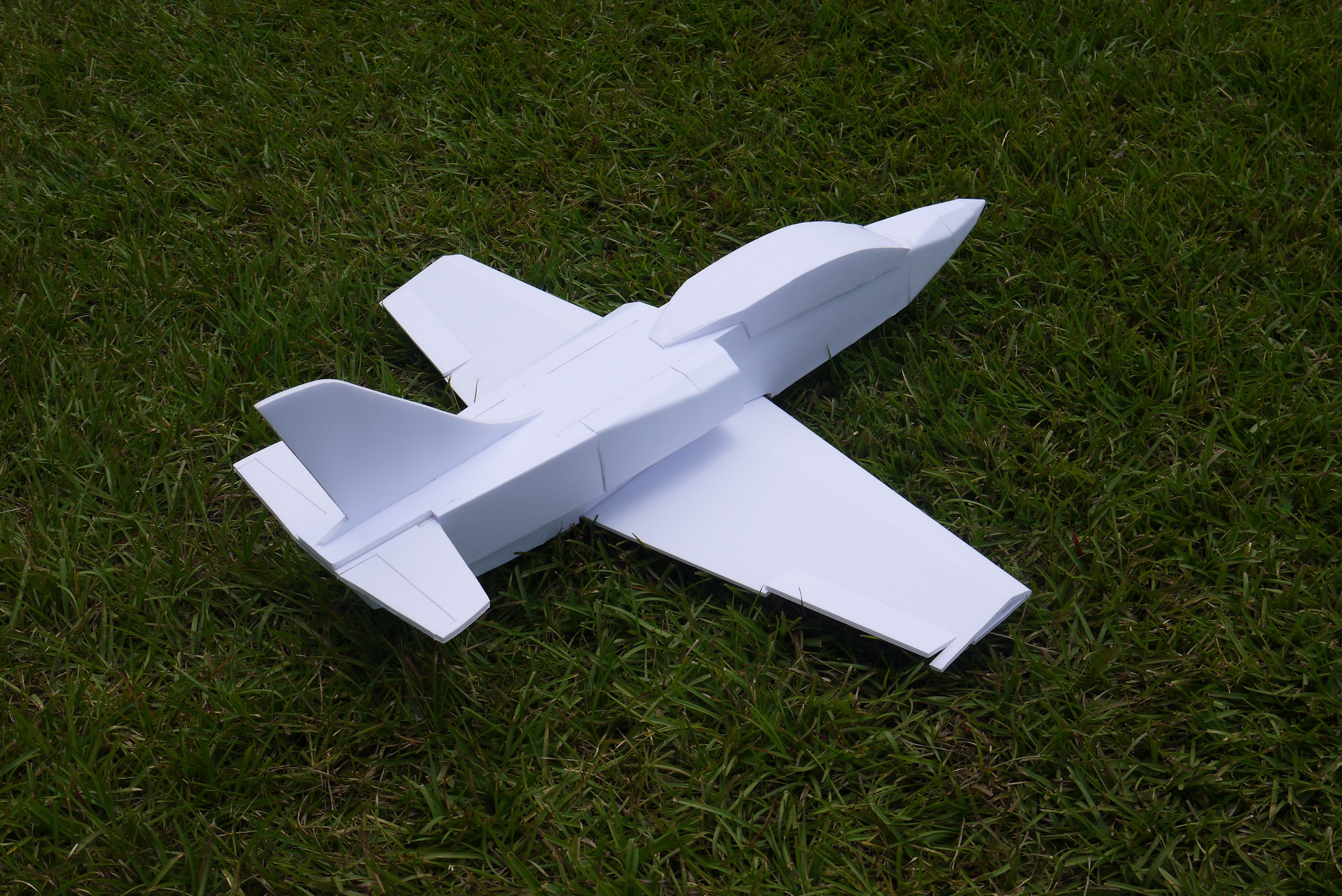 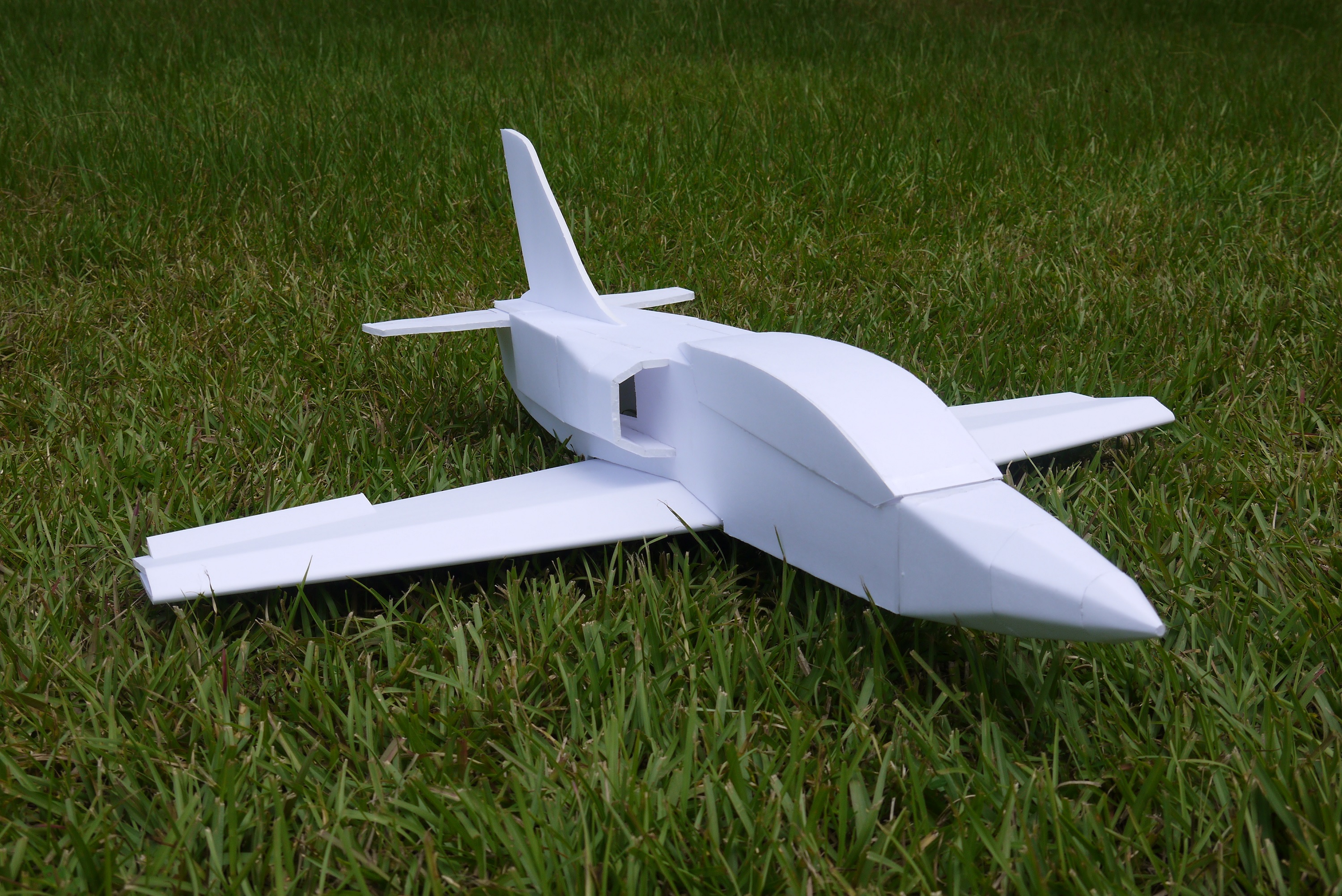 #3
Looks like another great design. What size edf or motor are you thinking?

#4
Looking good griff! Can I suggest a bigger elevator?

#5
jpot1 said:
Looks like another great design. What size edf or motor are you thinking?
Click to expand...
A 50mm EDF and an F-pack sized motor.

#6
.
WOW. The lines are so good. Im speechless, stellar work. I cant wait to see the finished product.
Im absolutely kicking myself, If I had access to it I would start cutting foam RIGHT NOW.
best of luck with the project

#7
Nice job! If it flies anything like your grunjet it will be a winner. I can't seem to kill that grunjet! I've already built the APmirage for the 50mm fan once the grunjet is no more. Apparently I'll just need to get a couple more of those 50mm fans, cause this looks awesome!

#8
jaredstrees said:
Nice job! If it flies anything like your grunjet it will be a winner. I can't seem to kill that grunjet! I've already built the APmirage for the 50mm fan once the grunjet is no more. Apparently I'll just need to get a couple more of those 50mm fans, cause this looks awesome!
Click to expand...
@jaredstrees What 50mm fan do you recommend? The biggest fan I have is the one out of my destroyed UMX habu... and seeing as the 50mm mini jets are coming in full force I'm going to need one.

#9
DMC RC said:
@jaredstrees What 50mm fan do you recommend? The biggest fan I have is the one out of my destroyed UMX habu... and seeing as the 50mm mini jets are coming in full force I'm going to need one.
Click to expand...
I'm going to use a FMS 50mm 11 blade EDF, the 4s version.

#11
@Grifflyer thanks! Checking it out now.

#13
I got an update for 'yall the project has been postponed due to moving across the country but I got back to doing some work on it and have fixed all the issues stated in the second post and made the prop version. The only problem that occured is there is a small gap between the front of the canopy and the nose and I think for looks I'm going to make it so the servo only needs one pushrod going from it to the elevator. 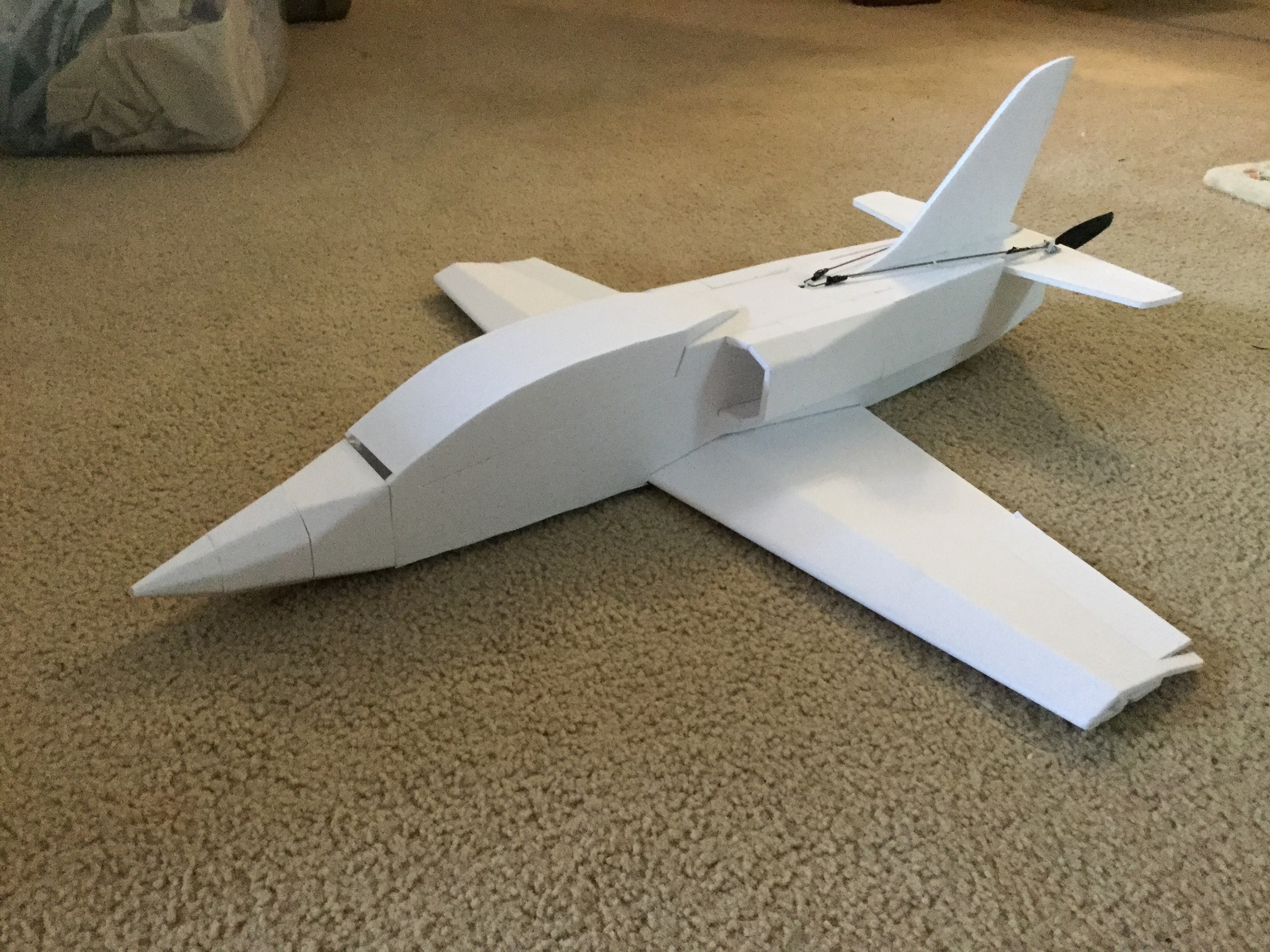 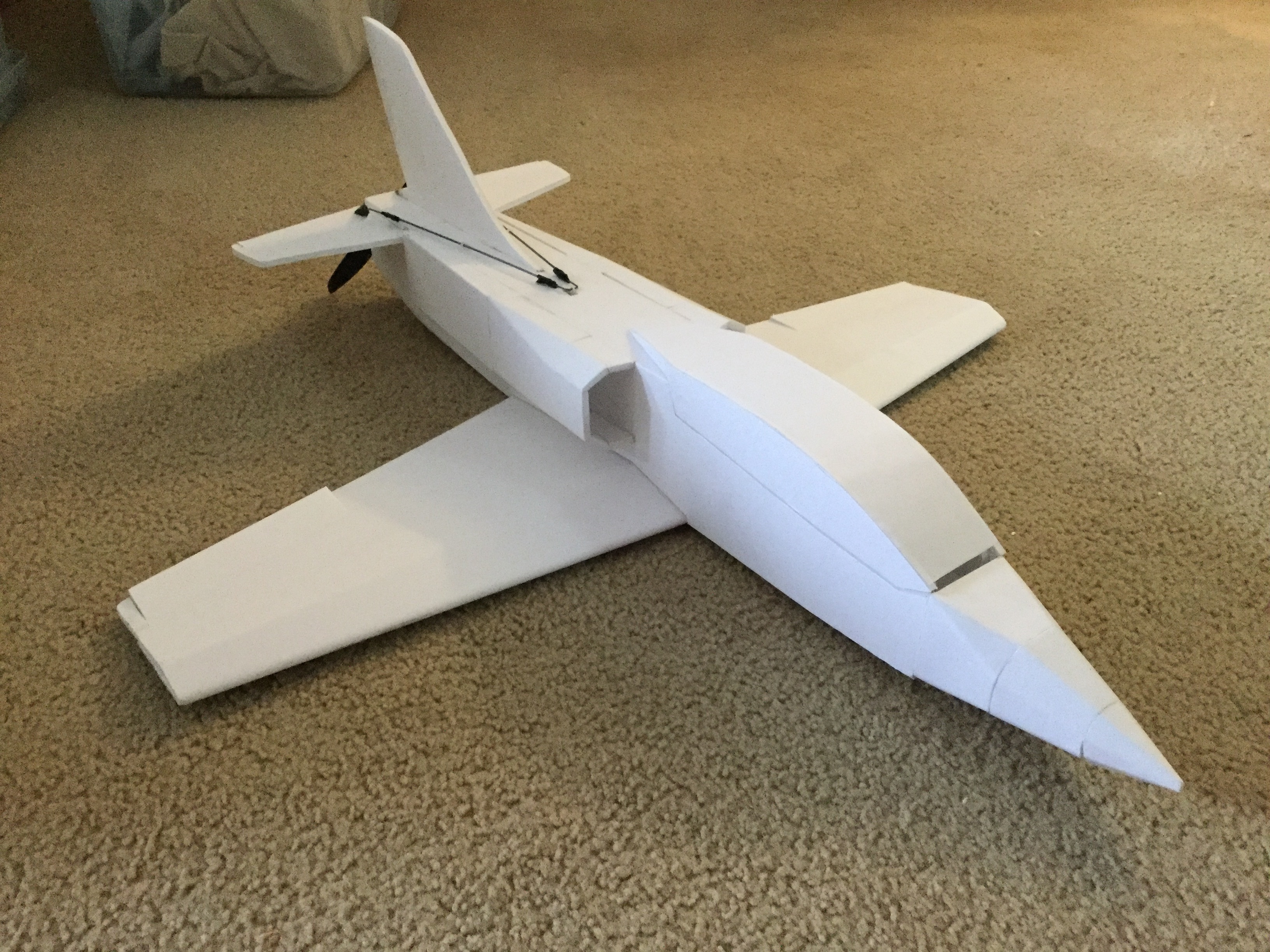 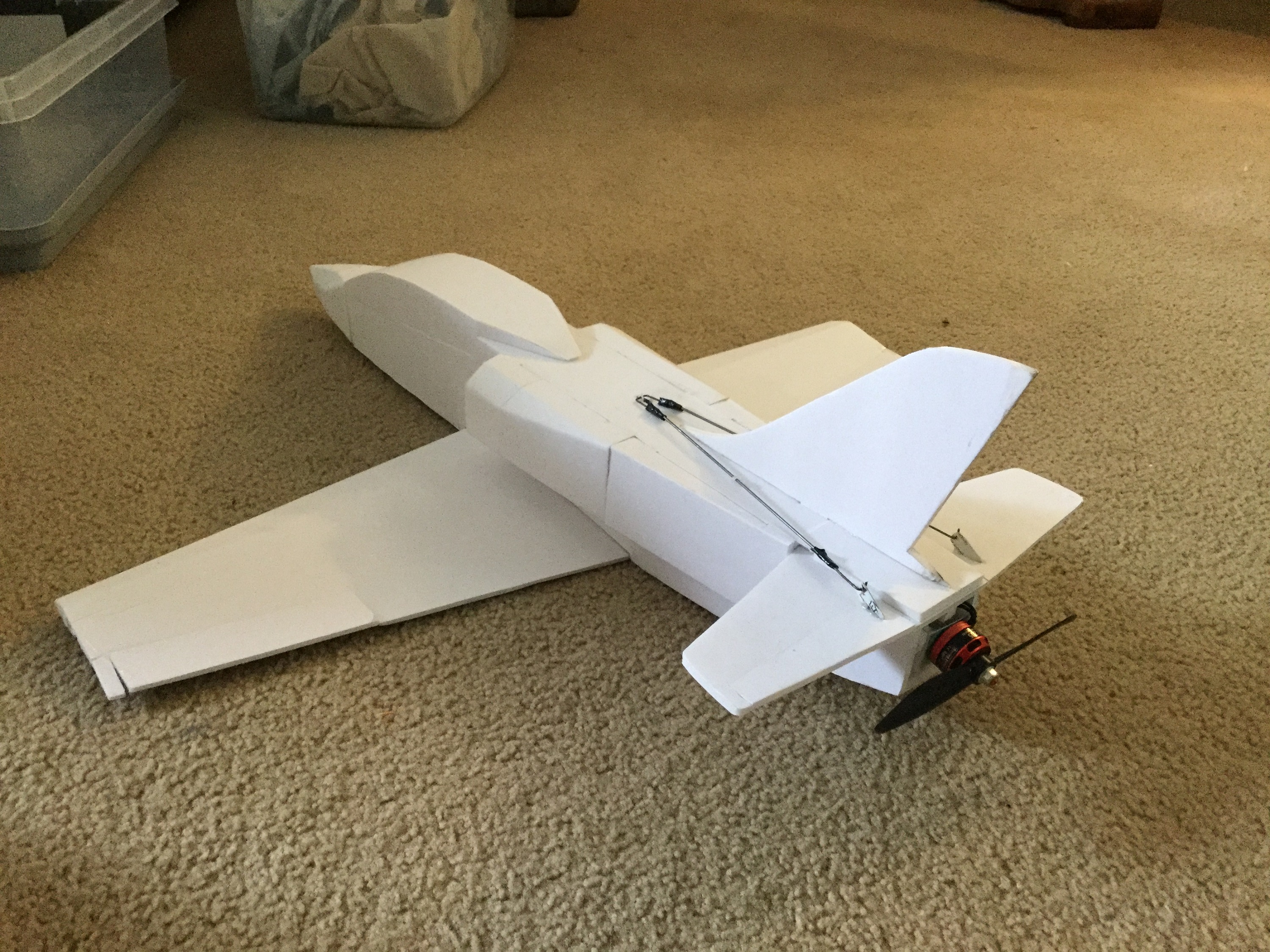 Now i just got to hook up the ailerons and make the tip tanks.
T

#15
Here's the maiden.
It flies great and slows down really well I just goofed up the landing a bit.

#16
Grifflyer said:
Here's the maiden.
It flies great and slows down really well I just goofed up the landing a bit.
Click to expand...
Great job! Looks like another great design. Will you be putting out plans? Would love to see some more pics of top/bottom/canopy/electronics area.

#17
jpot1 said:
Great job! Looks like another great design. Will you be putting out plans? Would love to see some more pics of top/bottom/canopy/electronics area.
Click to expand...
Thanks I am definitely going to be putting out plans, and I might be able to get some pics later today.

#18
Awesome job! Flies great. Plenty of power with that setup.

#19
Thanks everyone for support and for waiting I just wanted to let you know that I just finished the plans, so now I just have to get together a video and make the instructions. View attachment Plans image.png

#20
Hopefully if it doesn't rain tomorrow I might be able to start getting footage for the video... 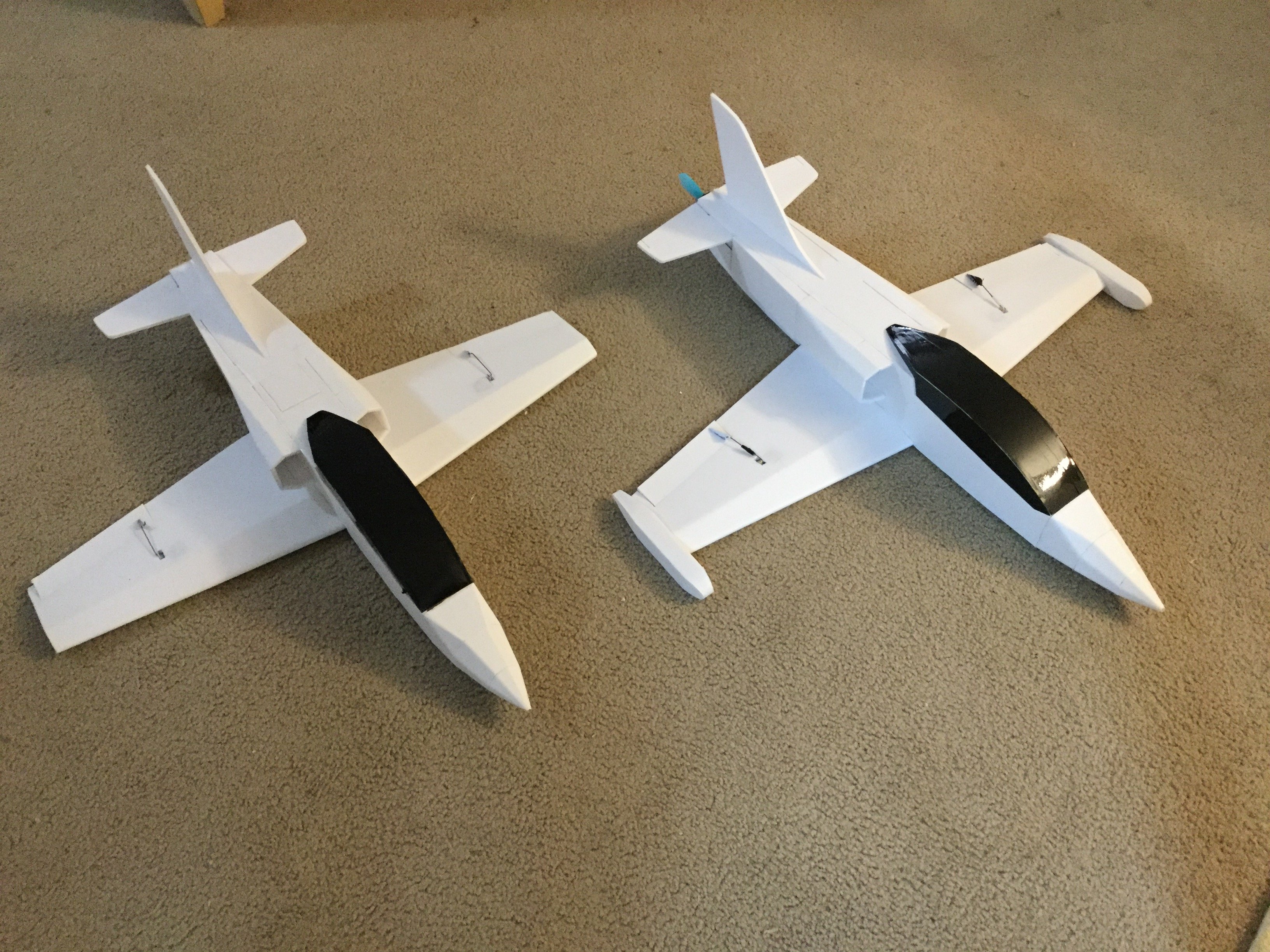 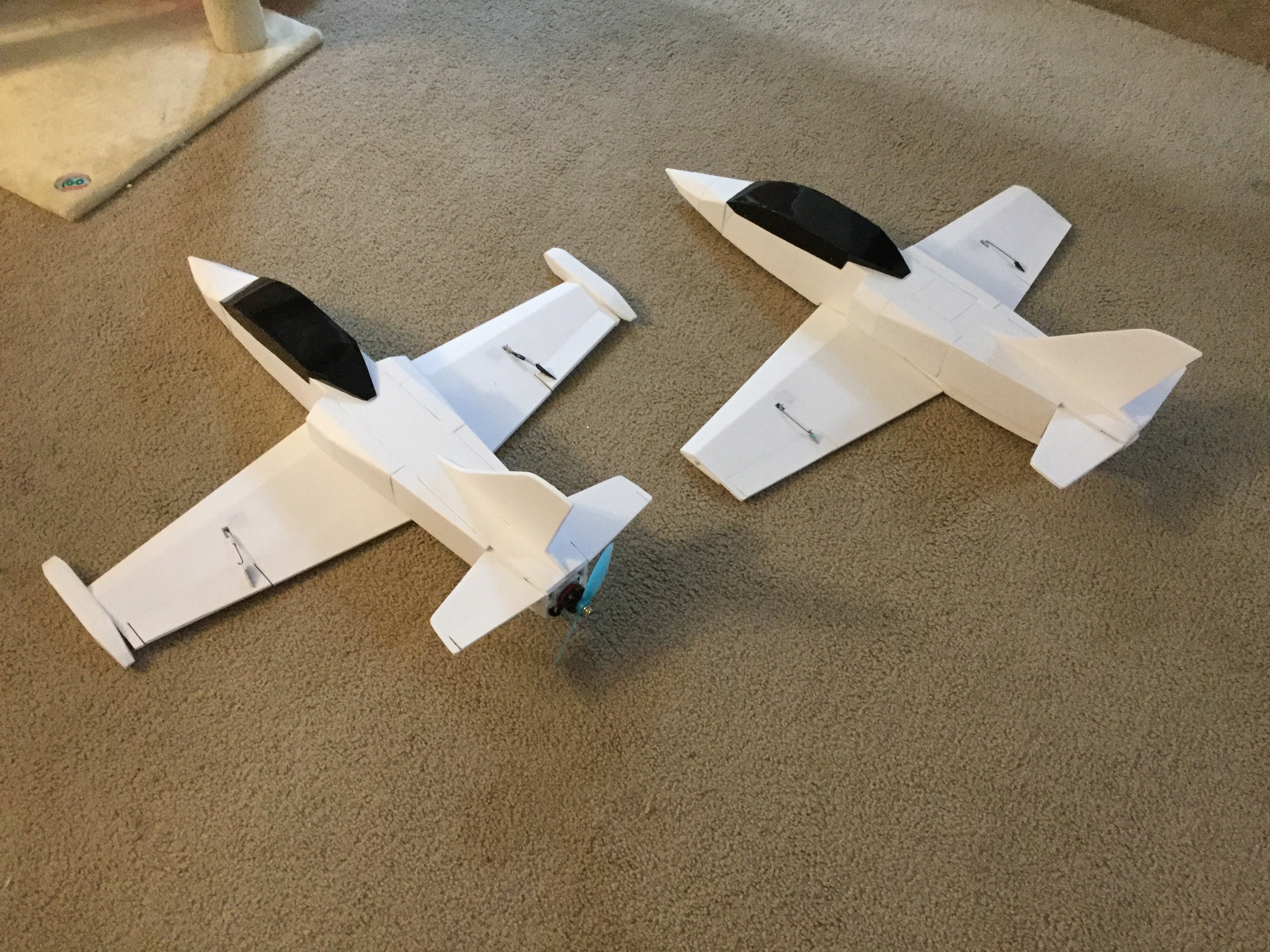