LOVE your work, and just ordered my first kit from you (the Cub),

Can we just talk about some basic physics/aerodynamics?

I'm a life-long model and full size pilot (I fly 737sfor a living, NOT that that makes me an authority), and there have been a couple of comments on the video that have made me cringe a little.

One was a comparison test of two drones which you noted flew at the same top speed in nil-wind, yet were suprised that they STILL did the same speed in a head-wind, as if one would "Catch the wind" more than the other,

That's not how it works!!

An aircrafts top speed is an AIRspeed- the speed the air passes over the craft, and is when the drag equals the thrust. Whether or not that air is moving over the earth in the form of wind makes no difference to the AIRSPEED the craft can obtain, so if two can achieve the same speed as each other in nil-wind, they will achieve the same speed as each other in a head, tail or crosswind. An aircaft doesn't "know" the air around it is moving relative to the earth.

Similarly, Josh made a comment in a video that an aircraft will pitch up as you turn into wind, and down as you turn down wind.

Think of a fish turning around and around in a fish bowl. Now understand the bowl is on a train doing 100MPH. The fish doesn't find it harder to turn in the direction the train is going or easier to turn in the opposite direction, because the water it is swimming in is already doing the 100MPH. Similarly, and aircraft turns in the "bowl" of air around it- and it makes no difference to the aircraft if that air is moving relative to the earth.

These concepts can be hard for modelers to accept, because WE stand on the ground flying a model that is in the AIR- but as someone who regularly does tight circles in high winds in my (fullsize) glider, I can assure you it doesn't pitch up and down as I turn into and out of the wind!!
Last edited: Dec 21, 2019

I think it's the perspective that creates that illusion.

It was easier, at least for me, learning to fly with my butt in the seat and hands on controls than it was flying planes from the ground. Heck, I think it's easier flying fixed wing models FPV than from the ground!

Flying upwind vs downwind distorts the sensation of speed for RC and "full scale" pilots alike. Both are more likely to get too slow and get into trouble turning downwind than upwind but that is the pilot, not the plane. Aside from turbulence, once aloft the plane doesn't know its windy...

#4
Hey Ross,
I still don’t think they get it. They still talk about how wind affects the performance of their planes. I’m considering sending them a formal proposal for a flight experiment involving a plane carrying a GPS and equipped to measure and record airspeed. That way they could see how the wind affects ground speed but not airspeed.

#5
PianoGuy said:
Hey Ross,
I still don’t think they get it. They still talk about how wind affects the performance of their planes. I’m considering sending them a formal proposal for a flight experiment involving a plane carrying a GPS and equipped to measure and record airspeed. That way they could see how the wind affects ground speed but not airspeed.
Click to expand...
You can't measure airspeed with a GPS, you need a pitot tube. Luckily you can get one for rc uses.

#6
My smart duck has both, it's fun to watch airspeed vs ground speed...

Sorry for not making myself clearer. I should have said, “...and equipped with a pitot/static system to measure airspeed.”

#8
Hondo76251 said:
My smart duck has both, it's fun to watch airspeed vs ground speed...
Click to expand...
Do you have any data (charts, graphs, etc) you could share?
M

#9
RossFW said:
Similarly, Josh made a comment in a video that an aircraft will pitch up as you turn into wind, and down as you turn down wind. No it doesn't.
Click to expand...
Have you considered momentem.

The problem Josh is talking about usually occurs when a new pilot is flying an underpowered plane slowly, near the speed of the wind. Let's say a plane is flying 5 mph ground speed into a 10 mph wind, airspeed is 15 mph, stall speed is 9 mph. Now we make a 90 degree turn, for a moment, the airspeed will drop below the stall speed. The plane doesn't immediately go from 5 mph ground speed to 15 mph, it takes time to overcome the momentum and build speed. The same thing happens when flying down wind ground speed is now 25 mph, air speed is 15 mph in a 10 mph wind. When you turn, air speed jumps from 15 to 25 mph, it takes a bit of time for the plane to slow down.

I could be wrong, my guess is as a full scale pilot, you don't fly in winds that approach your air speed. I can literally fly my plane backwards, my ground speed is negative. When I make a turn, it's going to drop like a rock for a moment, until it regains airspeed.
Last edited: Jun 6, 2020

#10
Merv
Momentum?
Momentum only exists as a relative velocity and as others have pointed out the plane does not see a change in air speed in a turn in a wind so there is no change in momentum. The momentum is only different when you hit the ground flying down wind compared to into the wind.

I have to agree with RossFW that Josh is wrong but as he is talking about something that beginners in particular will tend to see it is easier to describe it as an 'effect' rather than explain the limitations of the human eye/brain/hand reflex.
M

#11
quorneng said:
Momentum only exists as a relative velocity and as others have pointed out the plane does not see a change in air speed in a turn in a wind so there is no change in momentum.
Click to expand...
I must respectfully disagree, a plane that is seeing 15 mph airspeed and 0 ground speed, will see a change in airspeed when it turns. The direction of the airspeed that is critical, air went from going over the wing cord, which produces lift, to going over the wing span, which produces no lift. The plane is not going to instantly jump from 0 to 15 mph, it will take a time to overcome the momentum or inertia of standing still to accelerate to 15 mph. During this time the plane will drop.

#13
Now this is a topic for discussion lol
Air speed ground speed wind blah blah
While I do agree and understand in principle that the plane doesn’t know it’s windy But the pilot does
I an on mervs side 👍 on a calm day at 5mph or equivalent knots air speed at 1/4 throttle my plane gently flys around.
On a windy day 15mph or equivalent knots my plane will hover or fly backwards although I’m flying forward into the wind
I’m happy to say I know and understand the differences but dam she flys faster down wind on a windy day lol
M

#14
PianoGuy said:
Please read this: https://foxbatpilot.com/2014/06/17/the-myth-of-the-down-wind-turn/
Click to expand...
i read the article & the other 2 it pointed to. In all 3 articles it said this is an area where people disagree.

#15
hmm... they all say 'people disagree, but here is the facts of physics that say that it doesn't actually matter' what matters is that your ground speed can change, and in doing so, your understanding of your craft's movement gets distorted (because it cares about air speed, while your using ground speed). 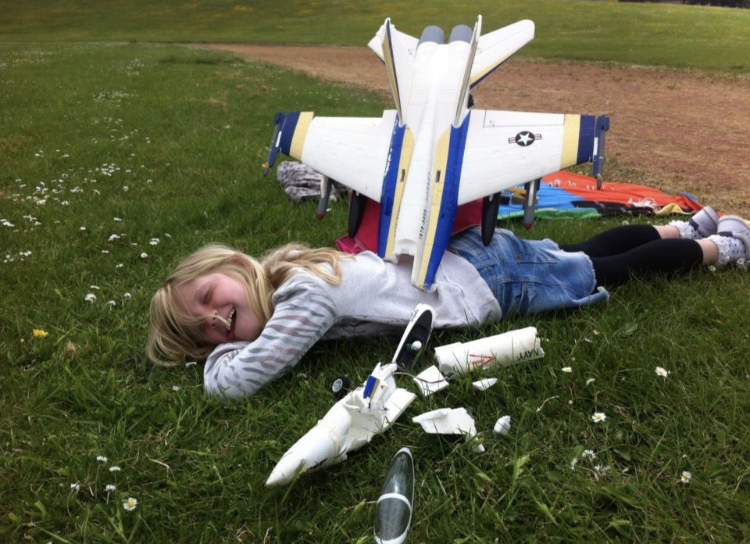 #17
Look at it like this: @ a wind speed of zero, you're flying 10 kph in one direction, then quickly turn and are now flying 10 kph in the other direction. There's this "momentum" factor you're talking about (it takes a second for the aircraft to pick up speed in the other direction, blah blah... it doesn't really work that way) all happening within a "static mass" of air. Now perform the whole thing in a 10 kph breeze. Either direction, upwind or down. Now the whole thing is happening within a 10 kph mass of air. It's exactly the same, regardless of the difference between the air velocity and that of the ground. You're not connected to the ground.

#18
The real effect is that your brain is trying to fly the plane relative to the ground. Flying 20 kph against a 10 kph breeze looks very different than 20 kph with a 10 kph breeze. Your brain doesn't really judge it correctly, so when you turn to go with the wind you wind up at a slower airspeed than you should - perhaps you saw it going so much faster and you let off the throttle. You thought going into the wind "hey my plane has to work real hard" and in turning around you thought you were on easy street.

The plane doesn't care about the ground any more than it cares about the moon. The ground has absolutely no effect on flight characteristics except when you're really close to it, or when it jumps up out of nowhere and smacks your plane.

#19
Sounds like this would be an excellent experiment for Josh and Company to perform!

#20
I think you're both correct, just getting tangled up in the terminology.

If I fly 15kts into a headwind of 15kts my plane is stationary. The plane could care less about the ground speed as far as the aerodynamic forces, but it does care about F = M × V. When it turns to come downwind the mass of the plane has to go from stationary to 30kts. The plane in the air reacting to the wind is not attached to the ground but it is still subject to mass and acceleration forces.

Of course, it's not exactly that simple, but it is one of the factors that makes the, "Impossible turn" so dangerous. Many pilots, even ones who are experienced and should know better, have tried to make it back to the runway after a problem on climb out.

With model planes, unless you are flying something pretty heavy and scale, you wont really notice this effect. If you are cruising at normal power for your model (say 50 - 60%) you can turn from upwind to downwind in a good breeze and not notice much change other than visually seeing your plane go from fast to slow. I think that causes more problems for new RC pilots in wind than anything. They see the plane turn and rocket downwind and they start cutting power instinctively. In this sense, Josh is more or less correct as it relates to model planes. Most of the time to you can fly your plane as though it doesn't care about the wind but you may notice a little pitch up turning into the wind and down when turning downwind.