#1
Earlier this year I came across this picture 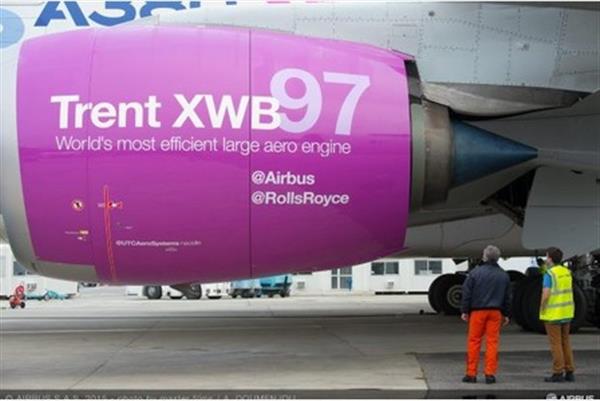 It makes you realise just how big these modern turbofans really are.
This posed a question.
If you could build the air frame light enough could it use a ducted prop with a smaller motor rather than a same size multi blade fan with a bigger heavier motor along with its inevitable heavier batteries.
A quick scaling exercise showed an Airbus A350 with a scale nacelle gave a 5" internal duct diameter and would have a span of 60" (1540 mm).
Racing drone motors are small light and powerful (4s) and suitable 5x3.5 4 blade (CW and CCW) props are readily available.
So one of these 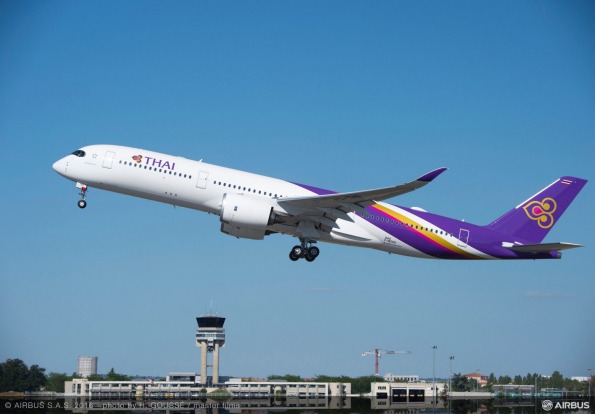 with a pair of these

Clearly it would not be blessed with an excess of thrust so it would have to be a 'simple' air frame (no undercarriage or flaps) and built super light but still strong enough to be flown outdoors - in calm conditions!
Clearly it would be sensible to build and test a nacelle before even considering building the rest of the plane.
Next question. Could the nacelle be 3D printed and would there be any advantage in doing so?
After much trial and error I ended up with this. 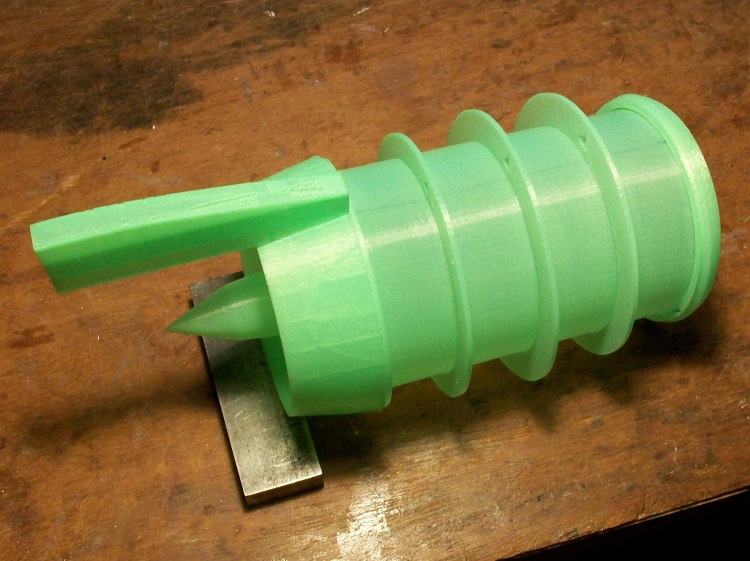 It s made up of 7 individual parts glued together. It weighs 27.2 g. The wing pylon is hollow to carry the motor wires into the wing.

And the outside of the nacelle is 'planked' in 2 mm Depron. 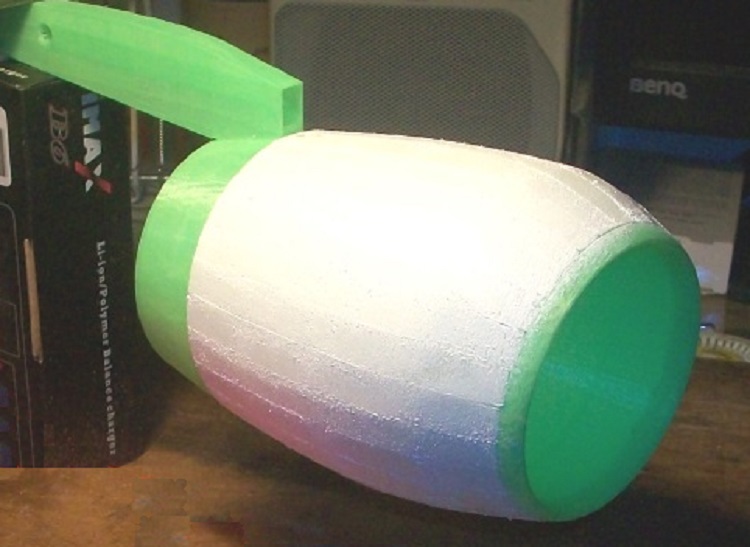 With the motor installed it gave just over 150g thrust but then it was only drawing 9A on a 4s.

I judged such a plane would fly well enough with a thrust of 50% of its weight so my target was a 600 g (21 oz) all up. With some 2 sqft of wing area it would have a wing loading of 10.5 oz/sqft, not exactly a 'floater' but still pretty light for a 'jet' and should be capable of a hand launch.
This could all so easily end up in tears!

#2
There is of course another big advantage of 3D printing something like the engine nacelle for a twin jet. Once you have got the first one right you can make another that will be exactly the same just at the touch of a button, well almost!

In a modern airline by far the biggest component is the fuselage and in a model, unlike the full size, its only function is to hold the wing and tail in place so it needs some thought as to how to make the lightest possible structure.
My view on 3D printing is to use it only where its strength to weight can be used to advantage which on a light weight design means only for highly stressed components where the accuracy or complexity of its shape is important.
As I have already successfully used 2mm Depron as a fully stressed skin I wondered if the fuselage formers could be printed as thin 'rings' particularly as quite a few identical are required for the parallel mid section.
To compete with a Depron former the printed version would have to use the material efficiently. As PLA is so much stronger than Depron this would allow the 'ring' former to be relatively skinny yet still achieve a similar stiffness.

Making full use of the 3D printers capability the former has a "U" channel section with 0.3 mm thick inner and outer rims and a thin 0.15 mm web between them. Each 130 mm diameter former weighs just 1 g.
Next is to construct a 'test' fuselage section to see how strong and stiff it actually is and with its weight gain an idea of how heavy the complete fuselage might be.
I decided to build the 'over wing' section with its significant cutout as this would show up any design weakness compared to the basically circular section of the rest of fuselage. 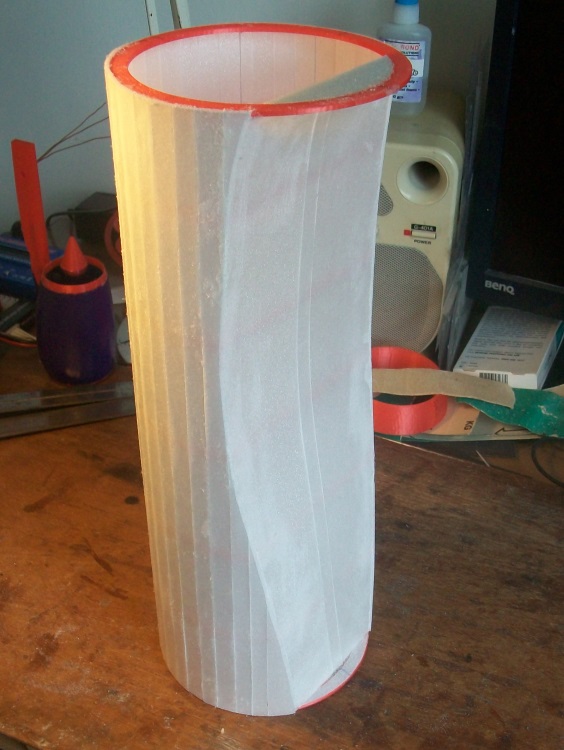 Built vertically, at least initially until it was strong enough to be handled, with simple parallel 2 mm Depron planks.
It proved to be remarkably strong and rigid. It weighed 26 g. Extrapolating this up to the full 1.6 m long fuselage suggests it would weigh about 100g.
It all looks possible but so far its just been 'playing about' with ideas. The complete fuselage is going to be quite a bit more complex. 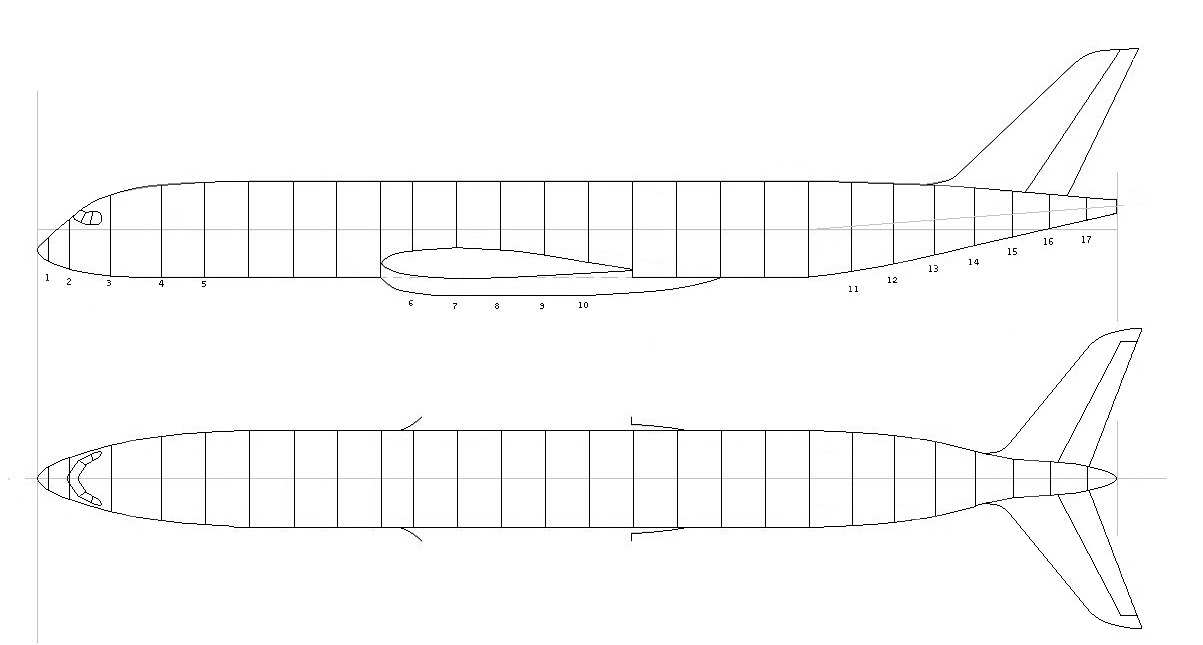 And I have not even thought about the wings!

#4
I decide the test section of the fuselage was quite acceptable so short extra front and back sections would be required to create the full length of the constant diameter part of the fuselage.
The front short section added. 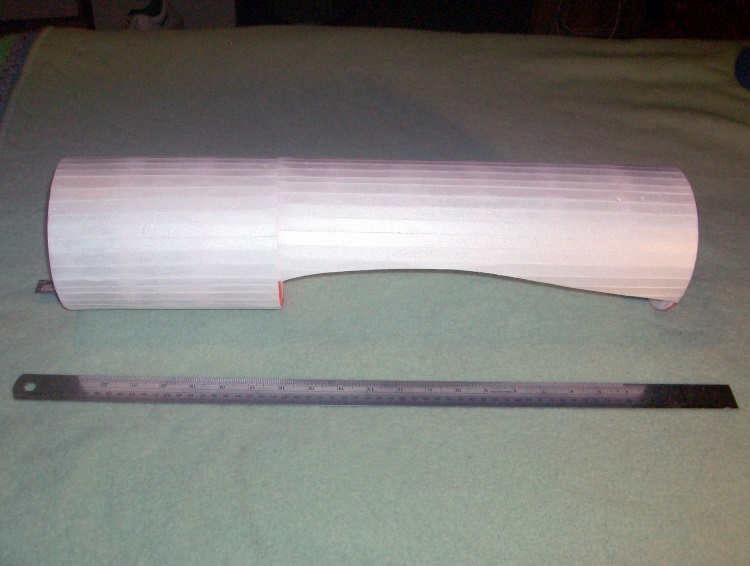 At least with 3D printed formers all the extra fuselage parts are exactly the same diameter.
The nose and tail sections will be a bit harder as every former will be a different diameter and some are not even circular!

#5
The fuselage nose and tail sections are built vertically.

It may seem an odd way of doing it but is not that difficult as long as you add each plank in opposite pairs and use plenty of eyeball to make sure it remains true.
Once the majority of the planks are in place they are then rigid enough to be handled so the final planks can be fitted "free hand".
Once the last plank goes in the increase in rigidity is amazing.
The complete nose

As a super lightweight there are no cockpit windows, they will be simply stuck on later!
The complete fuselage with all three sections 'tack' glued together. 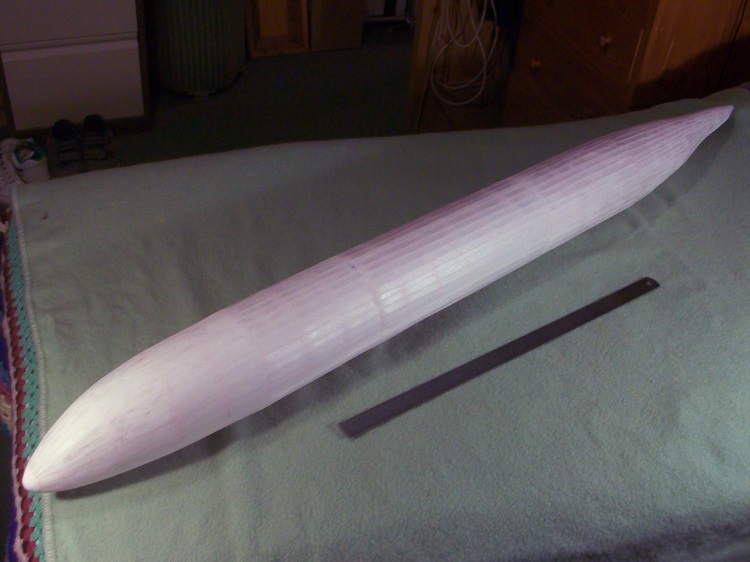 Note the 'waist' in the fuselage profile around where the tail plane will be mounted. Not a building error it really is like that!
It weighs 96 g so just within my target of 100!
Last edited: Sep 14, 2018

#6
I'm surprised this thread hasn't seem more attention, this is awesome! I bet you could definitely flt this around a large gym with how slow this will fly. Also for extra lift without adding extra weight you could have fixed flaps, just a thought...

#7
This is an amazing design!

#8
Thanks for the interest and kind words but to be fair this is not the first plane I have built using this type of thin Depron 'stressed skin' construction but it is the first where I have used 3D printed formers rather than Depron ones.
The result however is the same - a completely hollow fuselage! 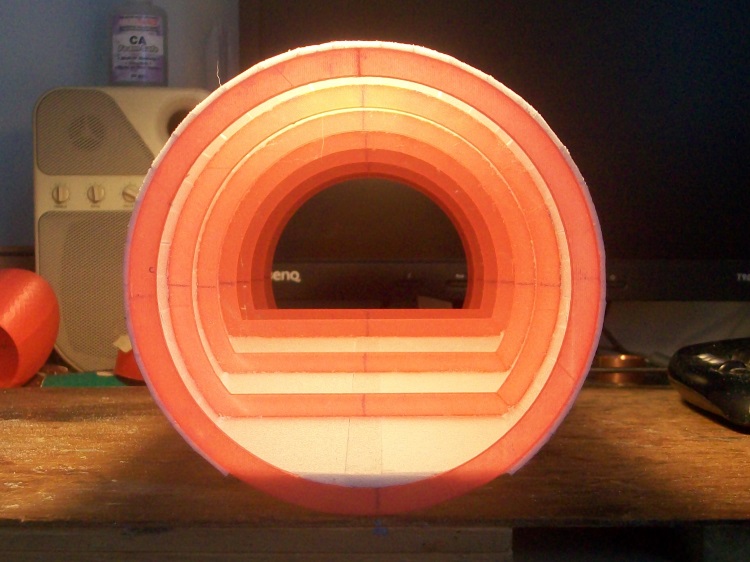 What is not there doesn't weigh anything!

#9
The quality of this build is spectacular. Great job!

Following. Very interested to see the final product and the first flight

#10
The next 'unknown' bit is the inner wing that carries the nacelle. Compared to the rest of the air frame the nacelle is relatively heavy and quite a way out in front of the wing so the inner panel has to resist twisting as well as bending yet still be very light.
The printed fuselage formers worked well so I decided to use printed ribs too at least as far out as the engine nacelle.
By good luck the big root rib just fitted on the bed of my Anet A8 printer. 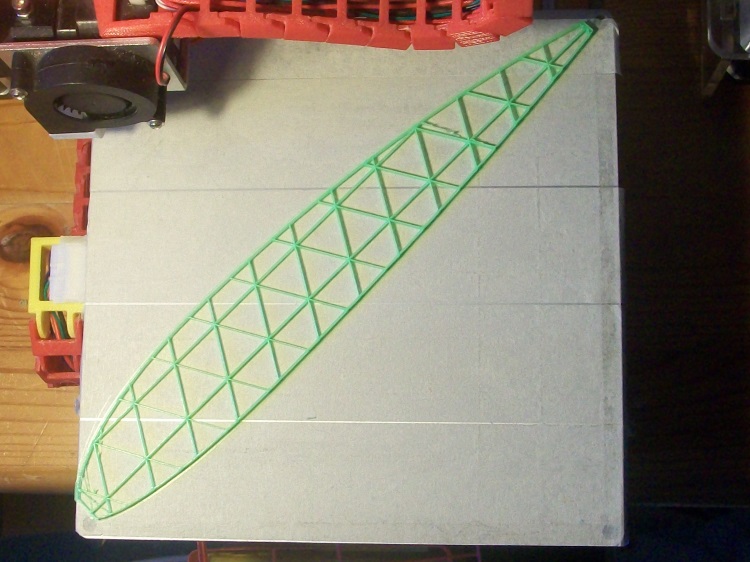 In common with most swept wing jet airliners the A350 wing has an extreme taper root to tip.

With such a small chord I fear the outer portion of the wing will not contribute much lift - just drag!
The inner wing panel under construction showing the position of the engine nacelle. 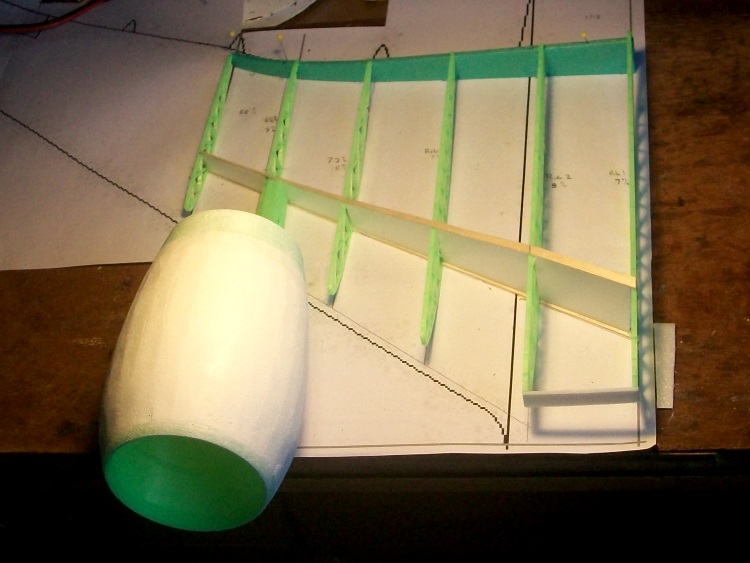 Note the rib trailing edges are supported to give their correct position and the composite balsa/Depron/balsa 'full depth' spar. The 2 mm thick spar flanges will be incorporated into the 2 mm Depron skin.
In this design all the torsional rigidity will be provided by the Depron skin leaving the spar to handle just the bending loads.
Last edited: Sep 18, 2018

#12
The skin added to the LH inner wing panel. 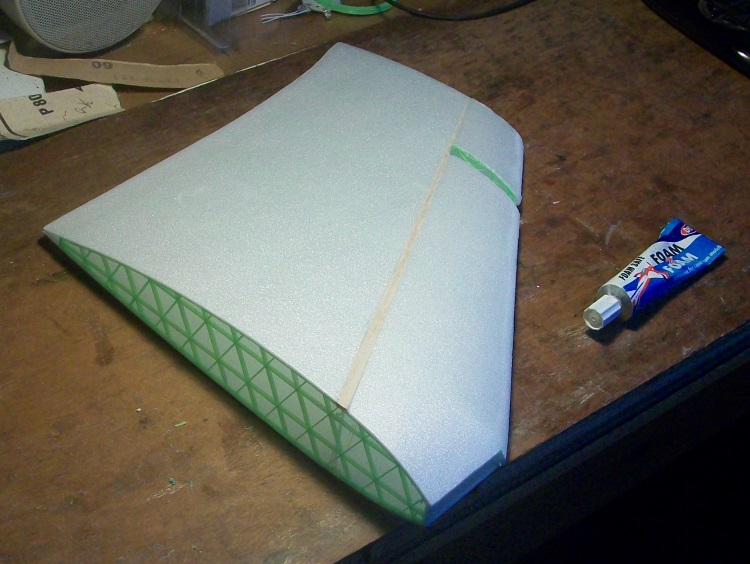 The substantial scale thickness of the wing at the root means the panel is remarkable strong and stiff.
The 'open' braced wing ribs means it should not be to difficult to feed the motor and aileron servo wires through the wing.
The actual wing leading edge is a strip of 6 mm Depron carefully sanded to profile once glued in place.

After some consideration I decided that the outer wing panel could be of a much simpler & lighter construction and required no reinforcing what so ever, after all a bit of 'flexing' would be entirely to scale!
The outer wing panel is simply two sheets of 2mm Depron glued over 3 Depron shear webs sized to give the correct wing section. 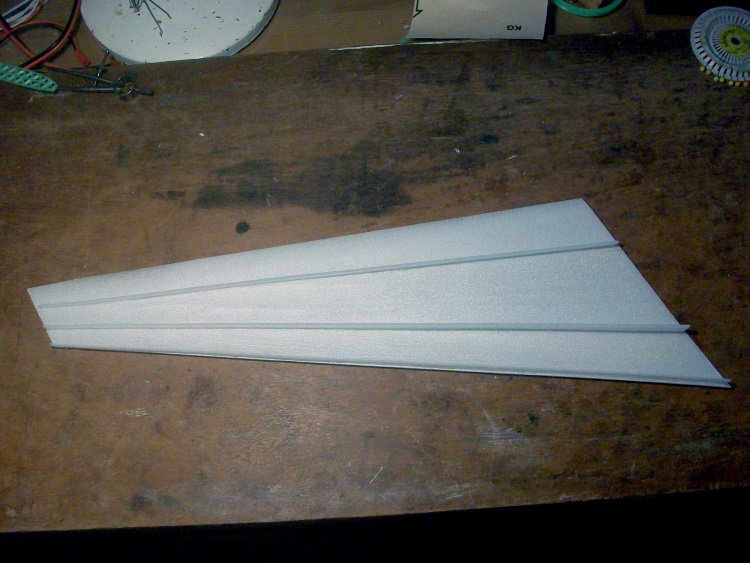 There are no ribs.
The "sharklet" wing tip is simply built up from 4 layers of 2 mm Depron 'formed' around a suitably sized tin! 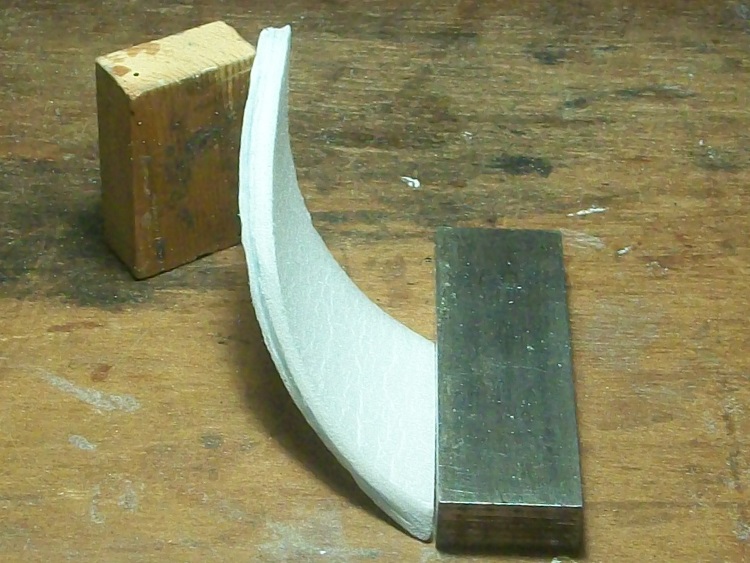 And sanded to shape when dry.
The aileron is just cut out of the wing. The wing is so thin that even a micro servo cannot be fully enclosed so it is 'inlet' through the lower skin and lies flush with it. With no ribs feeding the servo wire through is easy(ish).
The completed LH wing. 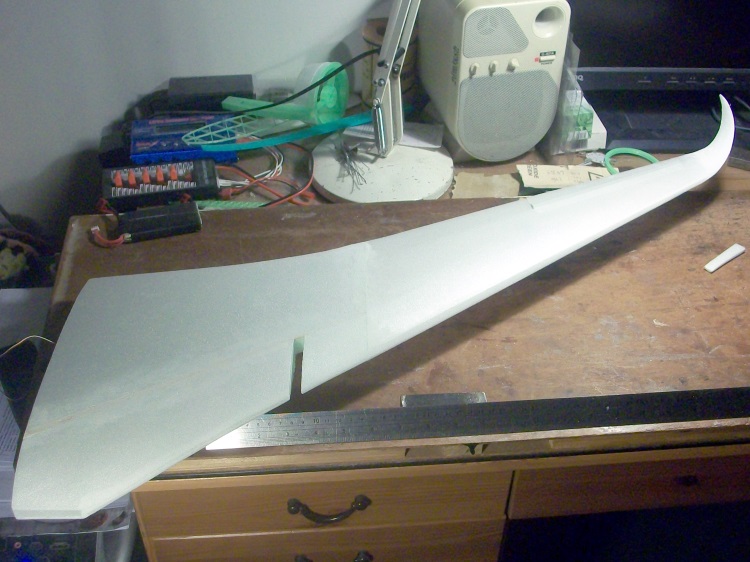 Now all I have to do is build the other one.

Mentor
#13
That is looking awesome! I love that you are blending techniques to make something.

A note on wing design. I know you mentioned that the outer wing sections won't be making much lift, only drag, but that shouldn't be the case. At this scale Newton is doing more work than Bernoulli so any bottom surface of the aircraft will be making lift. Also, drag is proportional to lift, so the end of your wings will probably be making a lot less drag compared to the root, which has a lot more interference from the nacelle and the fuselage. Your build looks great so far, can't wait to see where it goes. MD-88 next? ;p

#14
I might have to see how light I can build an FT plane using extreme lightening techniques because of seeing this thread. Are you going to just add decals to the finished version instead of adding paint?

#17
foamtest
By using white Depron and the Thai Airlines being mostly white it should need only a 'dusting' of paint over the majority of its surface.
Being a super lightweight and in Depron the overall finish will be 'stand off' quality as its more about getting it to fly than achieving the ultimate detail.

#18
The wing complete with the nacelles in place and the motor and servo wires brought through the wing underside at the centre. 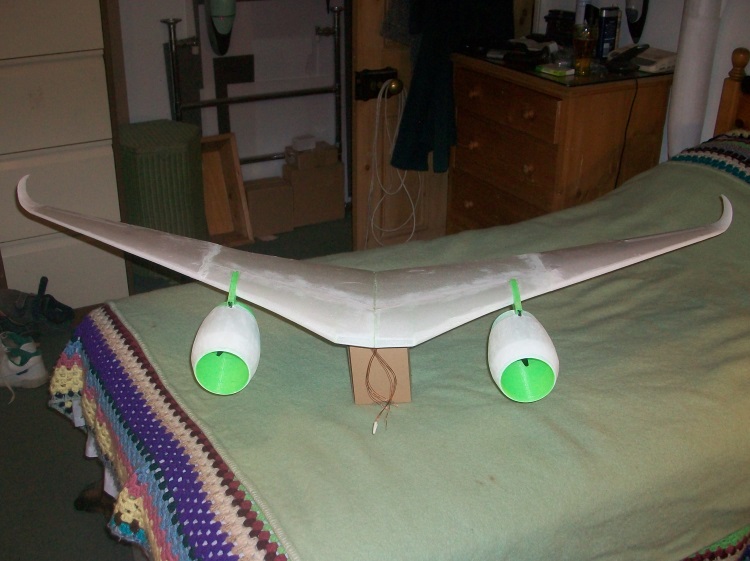 The A350 has a substantial under wing fairing (it houses the main undercarriage) but as there is no U/C I intend to mount the ESC and rx in there. This would mean most of the electrics will permanent and will not need to be disconnected when the wing is removed.
PS
If you look carefully in the bottom left hand corner you can see the nose of a our dog fast asleep! 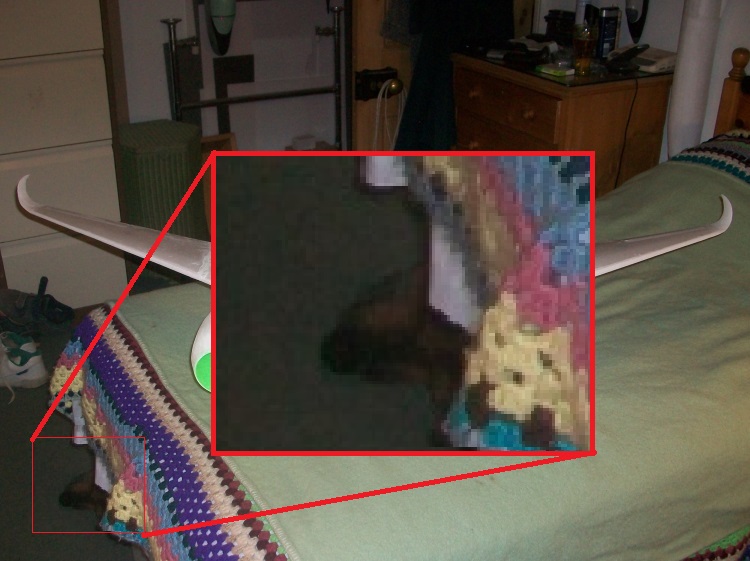 The next problem is the wing "cut out" in the fuselage does not accurately match the profile of the wing. Not that surprising really as I had not even designed the wing before I built the fuselage.
It will need some fairly delicate surgery to correct it.

#19
Wooooaaaooooohhhh! That looks AWSOME! I have some new trick to try out with my 3d printer it seems.

#20
With the fuselage cut out correctly ,and then structurally made good, to match the wing a special part former was printed to pick up the wing retaining bolts. 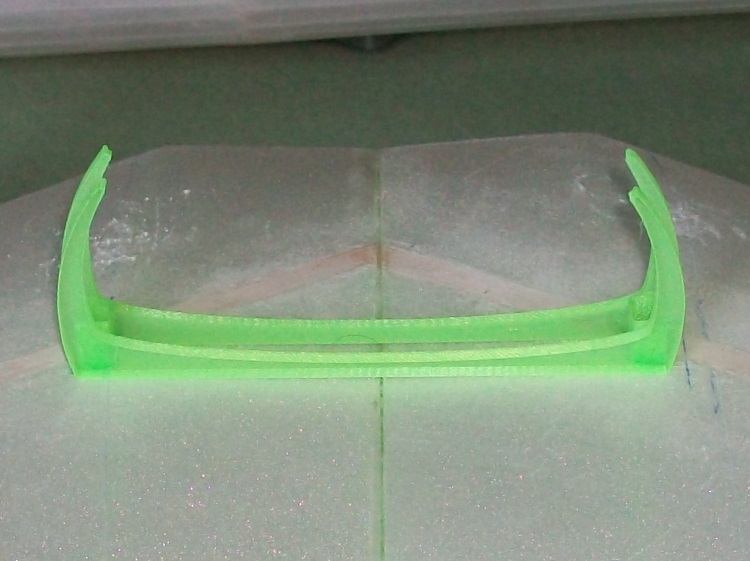 Once fitted and the bolts in place construction and 'population' of the under wing fair could commence. 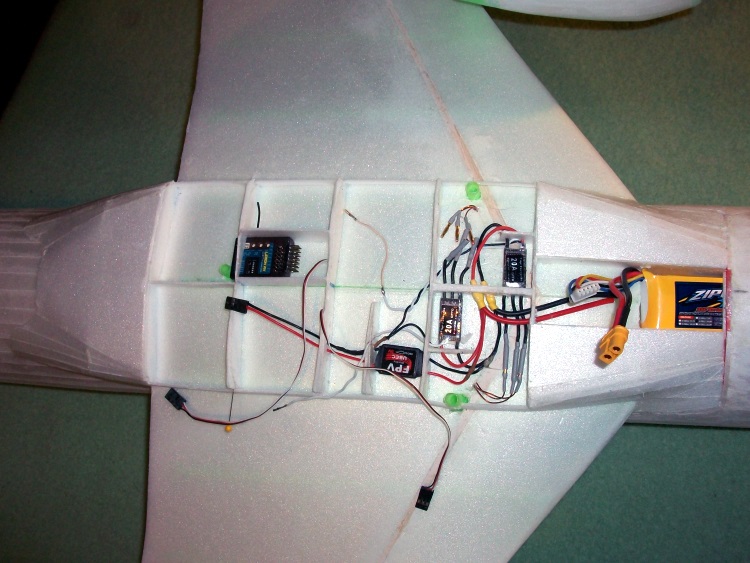