#1
When JGPLanes designed the White Diamond, he asked for someone to do an EDF version. So I upscaled it to adapt to a prop and EDF version, added my udder rudder and it is a "goto" airplane in windy weather. Then jfalleo1 added his version using retracts.

So I decided to experiment with landing gear, but felt limited by the thrust of my cheap 64EDF, so it had to be very light. 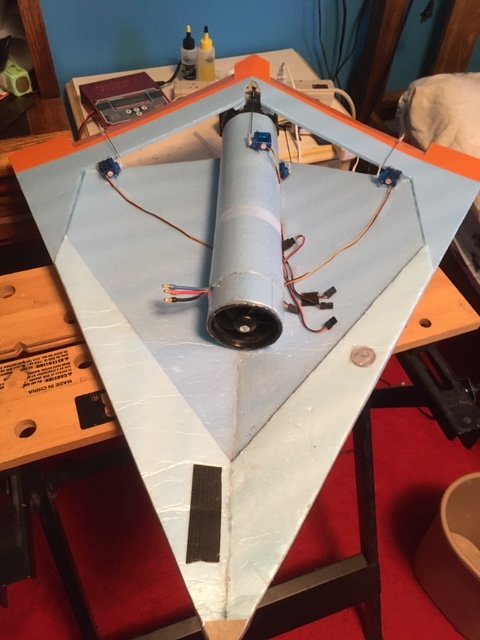 The take-off weight is 478 grams. In the past , I designed these and it work with EDF's and raised motor/prop so it clears the ground. Total weight of 2 mains and nose gear is 30.8 grams!!!!!! 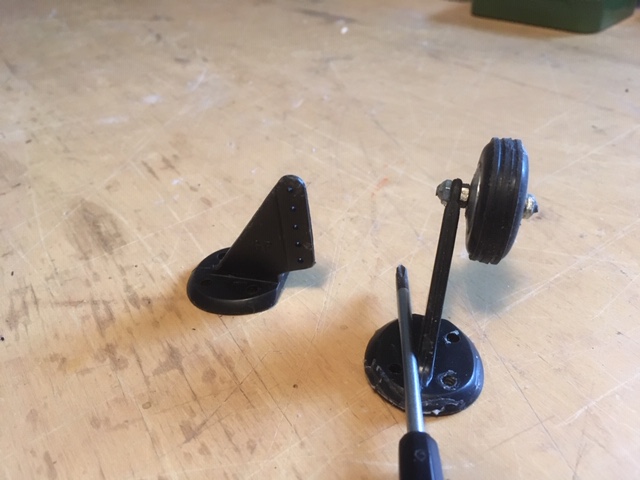 Made two of these consisting of an aileron horn from a 80' wing (dimensions 1" by 7/8' and 1 1/4' high) I had in my boneyard. Used a 1" wheel and retained it to the outer hole of the horn. Used nuts and hot glue to make sure nuts don't loosen so wheel doesn't fall off. 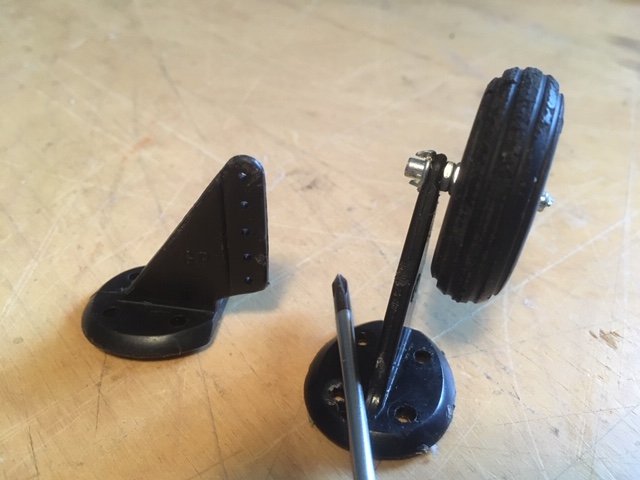 For the nosewheel , only difference is the diameter was increased to 1 1/2 inches so nose is pointed up.
Why,-- in most cases, the battery sits in the nose area somewhere close to the gear. By having it tilted up, the extra lift shortens the takeoff compared to straight nose.

So, now the total weight is 509 grams. Can't do much lower that that. 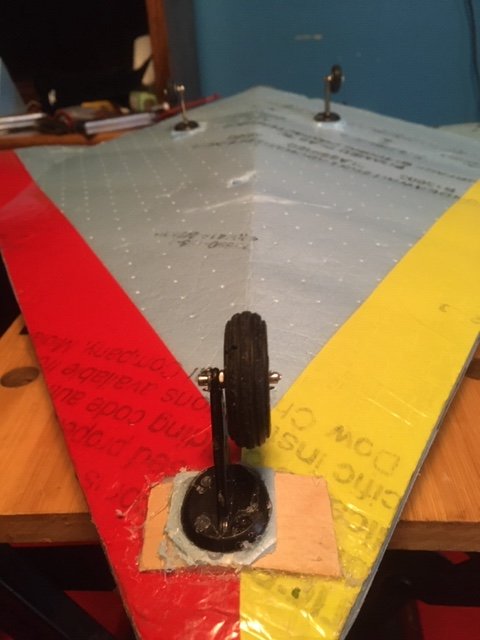 Testing the gear.
1) Main landing gear is set upright using slanted piece of foam. It is just hot glued and aligned up.
2) Used thin piece of wood and foam to get aligned using hot glue for nose wheel. Since I have active rudder and TV mechanism, will adjust if needed as to keep it going down the runway. Checked mine out in road to see if I can control it. Works good.

Experiment.
Close to home is a soccer field and parking area. My hope is to takeoff and land in parking area since this plane is very manuverable.

So, it is stupid the first time(ask me why) to do a rolling take off and perhaps hit the guardrail and destroy your plane if it doesn't get airborn.
Why not, chuck it and trim plane out etc., and then come in for a landing.

Gear is glued, so it will rip off and not destroy your plane, just have skid marks if lucky. If successful, then will mount other side with wood strip on fuse with self taping wood screws and then go for the takeoff.

That's my plan. Will do hat video.

#3
Great design. I thought for a moment you were doing retracts. For those of us that don't have spare 80" wing control horns, do you think the Dubro big ones are good enough? They are about that tall, but it would only affect maximum tire diameter. I also second the idea of tossing for first flight, only my nemesis was concrete parking stops instead of guard rails

#4
What a great way to re-purpose parts, well done!

I am happy with the setup!!!! Made 3 t/o and landings into a blinding sun.

1) The takeoffs were very straight using 3/4 throttle and 3rd, I punched it. Shortest take off on last was about 20 ft. Glad I put a noseup attitude on front gear.
2) Made 3 different approaches(noticed how this plane handles superb in tight spots.) Get it in, a nice approach, a high,hot, heavy landing to see what happens.
3) Used TV nozzle as rudder which really help prevent any stalls.

JGPLanes sure built a nice 10 degree dihederal plane that can handle winds and is excellant on landings. Going to explore more and see if we can get it to float in once I have a good feel on this ship.