#1
Balsa and tissue became an obvious solution for lightness, compared to foamcore. Easy to build and assemble, so easy in fact, that i was done before i ever learned about airplane dope. I would assume that the majority of amateur builders never pick any up, and instead just do a little waterproofing with a can of polyurethane.

I would suggest using SPAR URETHANE. Spar urethane is formulated to cure to a more flexible bond, traditionally for spars on ships, or doors, or outdoor furniture that is going to swell with weather. It also has the bonus of including uv blockers and antioxidants. The tissue will still break easily, but my theory is that it will be MORE resistant to moisture or cracking.

I suggest one light coat, followed WITHIN 15 MINUTES by one more. Dont let the finish cure before adding another layer. This will promote a single final bond instead of independent layers.

This stuff stinks for about 3 days, so leave it where the wife wont mind.

Here is the build utilizing this technique.

This (my first) build was an attempt at lightening the "tiny trainer" that i received in the flight test kit. 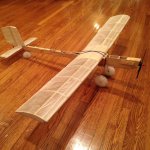 Fuselage is a step-tapered box construction, with a motor mount similar to the swappable power pod. Two strips of 1/16" pine are used to reinforce the holes. Id recommend this on foamies too if you intend on crashing nosefirst. 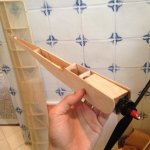 Main spar is three pieces of lap joined balsa to achieve dihedral. Ribs are cross lap jointed and are single pieces. Center panels of the wing are sheeted with balsa to accomodate rubber band pressure. Struts are arranged to be under tension during a collision. Their purpose may be obsolete if the tissue is tight enough. 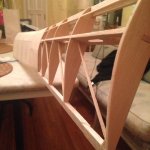 Tailplane is constructed in the same way, with controls attached with scotch tape. (Leave plenty of gap for the tape to adhere to itself, or your control will bind.) 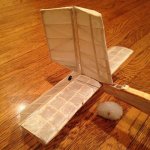 Some parts of the tissue may be partially sealed by glue or overlapping tissue. These will not turn transparent when sprayed with alcohol or sealer. Dont soak the material in an attempt to dope them. 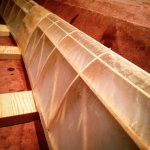 Thats the build. If this thread comes alive ill post a flight video.
So far all i can manage is high speed taxis and toss-to-landing, as im in my yard, and dont want to risk a tight turn stall.
J

Mentor
#2
Was the poly for waterproofing only?

I haven't ever doped anything that I have covered in tissue but so far I've only ever used tissue on rubber power stuff. After using Solite for the first time on my EVA build I would say it's an excellent alternative to tissue on anything over 24" wingspan.
J

Mentor
#3
Also I would love to see a flight video.

Mentor
#4
Love the project! But we need to see a flight video or it didn't happen

#5
After many "alternative landing maneuvers" in rough wind, the nose has finally failed. Several paper patches and an insufficiently laminated bulkhead were the primary failure sites.

Mk2 fuselage will come soon with the following changes.

#6
It was very cool.
Did you try to fly it in your living room?

Mentor
#7
ouch! hopefully the remaiden will have a little less wind to deal with too

Mark2 fuselage came together rather quickly. First detail is a pine frame composed of 2 L shaped pine longitudinal runners, with holes for adjusting the center of lift and main wheels assembly. The pine also acts as a robust skid to allow the wing to slide under impact loads.

Second detail shows Mk1 and Mk2 side by side. Mk2 is upside down to display the bulkheads (term correction anyone?). I am hoping the squarely fashioned nosepiece will be more robust than my curved nose, which you will notice, never had reinforcement accross its grain.

And finally a grainy image of the fuse with the Mk1 wing and the Mk1 Tailplane.
All up-256 grams

High speed taxi tests in a curved/ sloped/ stone having/ wet/ car filled driveway have provided me with a very strong little floater, and now that i have my FAA registration, its time for the runway.

#9
Oh, and as for the color, it was achieved by step sanding to 400 (which is almost too fine to matter on the raw balsa), then two coats of dark dewaxed shellac. Final coat is some more spar varnish from a can for water repellent.

The shellac base added approximately one gram.

#10
Years ago when all we had was tissue or balsa covered, at that time we used dope to adhere the tissue to the frame only applying dope to where it would stick to the balsa working all the wrinkles out. Once covered and dry we would wet the tissue with water and it would shrink the tissue causing it to tighten drum tight, then apply what ever coating usually dope. I do not see any reason Valspar would not work in the same manner if it gets tacky enough.

#11
Here is a short flight clip. Landscape slopes off and i make an immediate landing in this shot.

Also my first video upload ever on youtube, so there's something new.