Admin
#1
You can blame this one on the After Hours guys but I have a new go to plane in the fleet.
The Park Zone Sukhoi SU-29MM

I've been flying electric planes for a year now.
I've had a few new foamies but the SU-29 is the first big dollar serious purchase
but since it was a birthday gift it does not violate the "cheap" hobby rule.

I picked the plane on up Thursday after placing an order with my local store.

I'd be out driving with my sports car not really thinking. In fact I'd spent the afternoon flying with my Dad.

- That is a really big box.

- Yeah this is not going to fit.

- We ended up leaving the plane at the store and getting my Dad's car.

- Look at all that green.
- You know I had to practice saying "SU Khoi" for some reason I kept pronouncing it all wrong.

- Ah unboxing shh. Not supposed to be opening the box till later.

- Ah look at that space. Actually very clean and simple.

It did not take my Dad long to cut the stock connector off and put on a XT60.

- No need for adapters when my batteries all use XT60.

- In my Dad's shop I'm not allowed to use his soldering iron.

- I'd recently bought the Orange DSMX module to fly the UMX Radian with.

- Binding worked out but had me worried for a bit but the combo I run Tunigy 9x with an Orange DSMX module is good.

- The 3 way switch and safe trigger took some programming. I'll cover that shortly in an article/video.

- My parents delivered the plane later that afternoon.

- Once all the "birthday" stuff was out of the way I was finally able to open the box up. Shhh

- The normal respond from the family. Gee something else to store.

Build/Maiden in under an hour
I actually did the build and maiden Su the following evening.
The build took no time at all. A few screws, tape in the elevator, snap a few other pieces and presto you are ready.

-The plane was stuck in the AS3X 3D mode due to a switching issue so I had to keep the speed down.

- However it flew clean and straight out of the box.

After the first 2 flights I spent the evening sorting out the mode switch and safe trigger. More on that later.

Saturday was the true first flight
I wont bother talking about the modes since the FT AH podcast highlights everything. 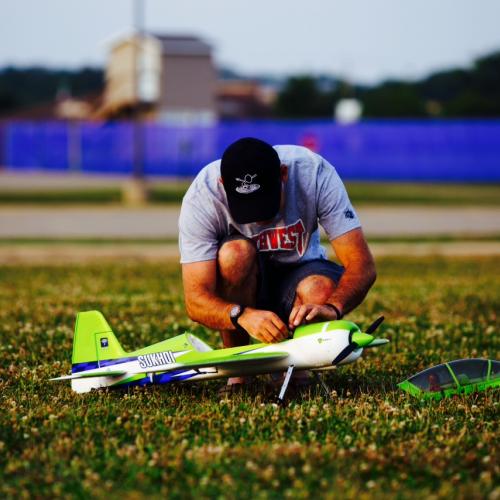 But at first I hated that Stagility™ Mode it felt to aggressive, till Sunday when the winds picked up and more comfortable with the corrections the mode would make. Then I started goofing around and having fun. I could tumble the plane and just give it a second and SNAP she'd be level again. Just give yourself some height and go for it.

- AS3X® 3D Mode is fun and I will keep pushing myself to get comfortable but early on I was doing a good number of stunts.
I need to teach myself to slow down and enjoy the experience.

- AS3X Precision Mode is was the mode I flew the most in initially.
The plane is very clean and crisp in this mode and I was enjoying the sport flying aspect tossing her around.

Landing
One thing if you are looking at this plane is focus in on the landings.
I thought my T-28 was going to prepare me for landing this thing plane.
There a few things you'll want to know.

1. Speed it will trick you into thinking it will glide in nice and slow but will stall all of a sudden I kept bouncing off the deck initially till I started coming in hot.

2. Springy landing gear. Good and bad. What happens is on a hard landing you will bounce and scrub the prop but that is about it.
I am still getting comfortable with the speed and flaring with the SU but will nail it soon enough.

I've been landing on the gravel running track at my park but find the stone get into the cone and cowl. Something to watch for. Going start landing it on grass I think.

I'll report back on my progress with the SU-29MM but I do feel I've found a plane that is fun and exciting to fly with.
Of course we all know this is just fuelling the addiction.
Last edited: Sep 29, 2014

#2
Very nice! I saw these at EWeek and I'm tempted to get one once I start to fly more. Thanks for sharing!

Admin
#3
Yes great plane but not a beginning bird for sure.

If you are looking for something to throw around and do some basic 3D try the FT Racer.
I love mine. It will roll and loop all day long. Plus it will take a beating

#4
I've actually got a custom Extra 300 that I've put together but if it turns out to be a fail then I'll try the FT Racer. Thanks!

Now I need to learn to hover

Admin
#6
Well it has been a few days since I've updated my experience.

Friday I managed to get out just after 6pm and flew until the light was too low to see. (6:45/7pm)

Was having a blast in all modes and then turned my attention to landing the Sukhoi.

With no one at the field I could really get comfortable and repeat the landings over and over.

Su like to come in fast. Just under 1/2 throttle with a low pass and slight flare.
Not to much either. Directly down and park it other wise she bounces and scrubs the prop.

So I'm improving and getting more and more comfortable with that.
Very different compared to the T28. Really it is the gear being springy.
I never nosed over but got sloppy on a few attempts.

Also the drop off/tip stall is very sudden and you will dip a wing. I find it is often the left one.
So don't slow down to much on final.

I was having a lot of fun doing a 180 degree turn on final and bringing her in quickly.

#7
FYI Andre, I flew mine this weekend with some 3S 3000's and my flight time was at about 6 minutes. The CG works out pushing the 3000 up until it stops. I've been having a blast with this plane so far! We've been posting some vids here

Admin
#8
Yeah as I fly I'm finding I'm getting better on the throttle and have been able to push the times up but I've added an alarm to the balance port just to be safe. 3S 2200's.

Admin
#9
Love the video. I want to pick up a 2nd canopy I can mod for the camera but I do love throwing this plane around.

It will roll forever

#10
Andre said:
Love the video. I want to pick up a 2nd canopy I can mod for the camera but I do love throwing this plane around.

It will roll forever
Click to expand...
Haha, thanks! That's the first thing Steve said when we were at the field.

Finally was able to produce a simple setup video.


The ParkZone Sukhoi is a great plane but unless you own a Spectrum Radio you have to be a little creative.

This video covers setting up the Sukhoi to work with the Turnigy 9x 9X and Orange RX module with DSM2.

Configuring the 3 way switch for safe flight mode selection and the panic switch can be interesting but this does work.

Admin
#13
Yeah I do like having it in the hanger but it is funny I really need to be in the mood to fly it.

Still no regrets. Other then I doubt I will get to fly it much over the winter.

#14
Andre said:
Yeah I do like having it in the hanger but it is funny I really need to be in the mood to fly it.

Still no regrets. Other then I doubt I will get to fly it much over the winter.
Click to expand...
Ya i feel i have to be in the mood for my 3d plane i mostly fly it on crazy days or if i dont feel like driving to the field sence i can keep it in a small area doing hard core fast acrobats. Not much for the slow 3d flying. I can see winter being hard for you. It may not snow in florida but the winds get killer down her during winter time. Guess ill be doing alot of building.

Admin
#17
Plus the SkyMule.
Really if I can fly and keep my hands in the tx Mitt I'll be A OK.

I wonder if I could put skis on the the SU... I bet the AS3X would freak out

#18
Andre said:
Plus the SkyMule.
Really if I can fly and keep my hands in the tx Mitt I'll be A OK.

I wonder if I could put skis on the the SU... I bet the AS3X would freak out
Click to expand...
Just put some foot skies on the wheels and keep the cg right then it shouldent hurt the AS3X

Admin
#19
Yes that is a possibility

But I won't know for a few more weeks. I hope at least.

Anyone up for some low level passes