#22
@ flubutur, thanks for the suggestion, I did plan on making an aerodynamic exterior but did not know the name of those ducts. I put it on the list and will definately use it!

#23
And I definately made some progression the last couple of days! During the process there where definately some challenges, mainly with the 3D printer. I noticed yesterday that the quality (and surfacefinish) of the prints dropped rapidly and was forced to find out what caused it.

Without going in too much detail; A couple of settings seemed to be reset in the slicer software mainly concerning the Ooze control. After I changed it back to how I wanted it it seemed like the issues where resolved. Unfortunately not that long afterwards a new issue surfaced and this time with the extruder that had trouble feeding the filament (even at moderate to low printing speeds). After checking a few things I decidedThat the best step would be to replace the stock extruder/hotend combo with an E3D V6 / Titan combo.

Today I got back to printing after some minor updates in the printers firmware and slicing strategy and managed to make 7 parts today. I have to say, seeing the parts in front of me and seeing the idea slowly becoming tangible is really motivating and excites me!

SO on to some pictures.

This is the new extruder in its place. I mounted it with a piece of aluminium sheet. 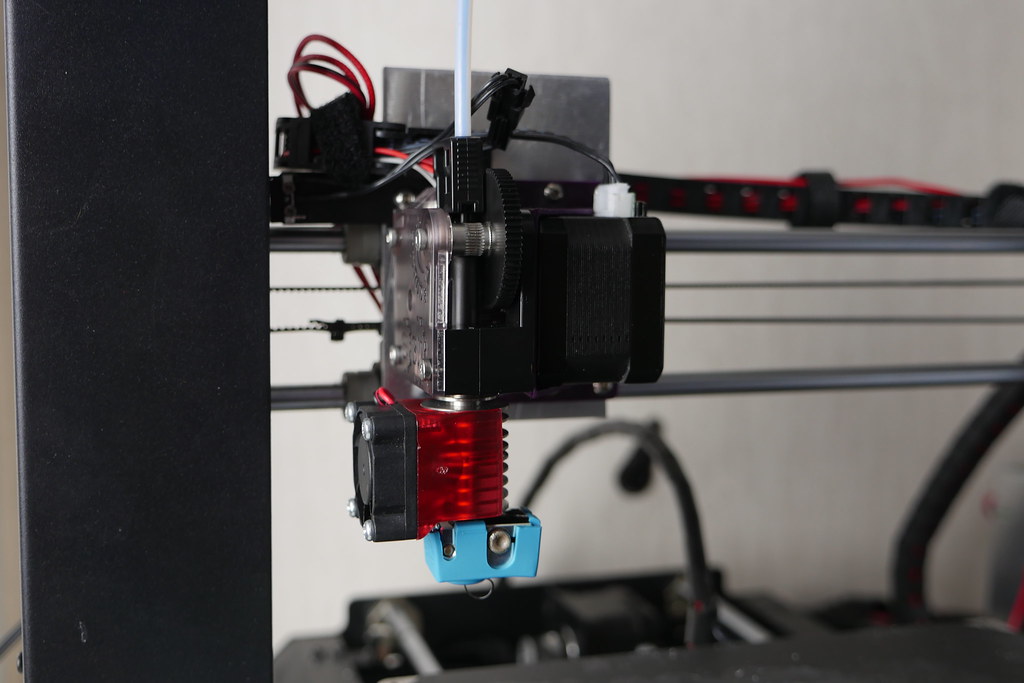 Cage sections (6 in total) that I made yesterday: 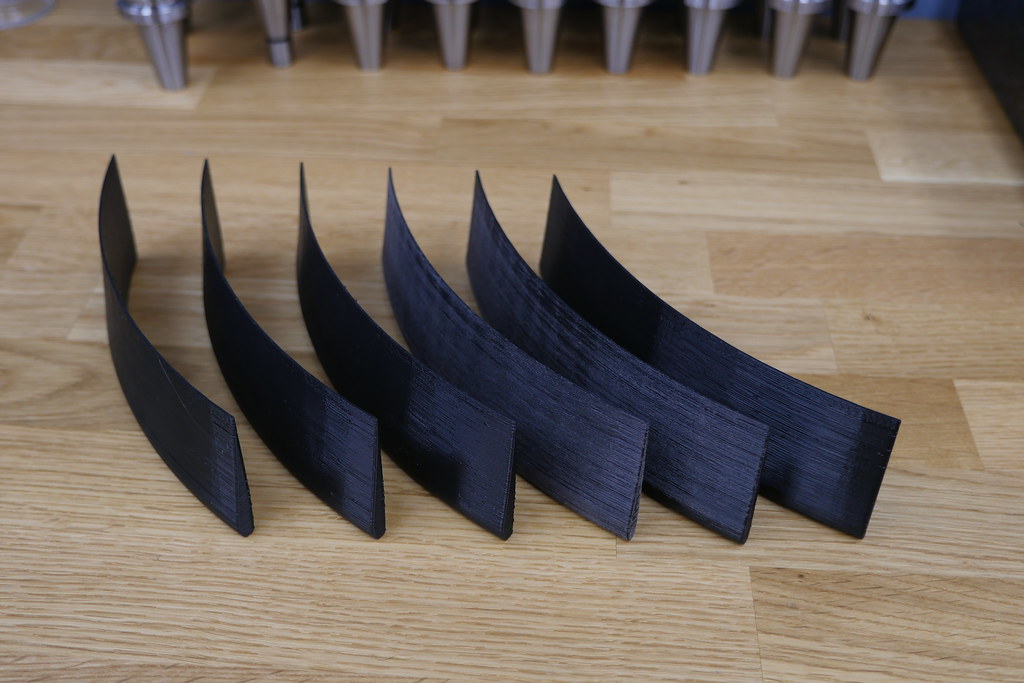 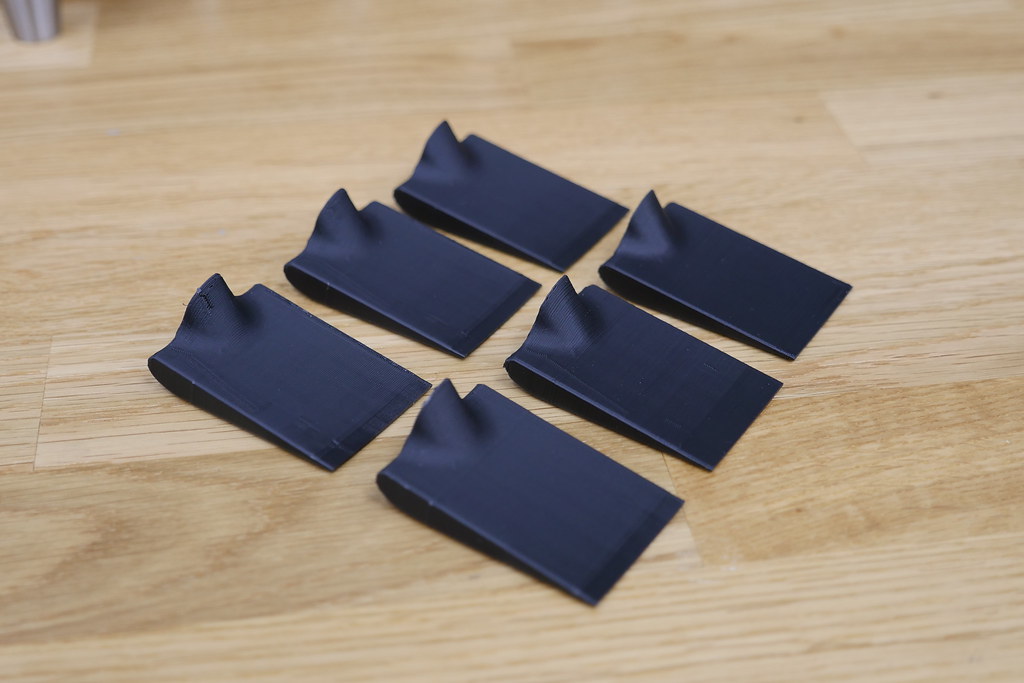 Today I made the bottom part of the cage arms (also six pieces) and the large center section that it all mounts to and also houses the motor. 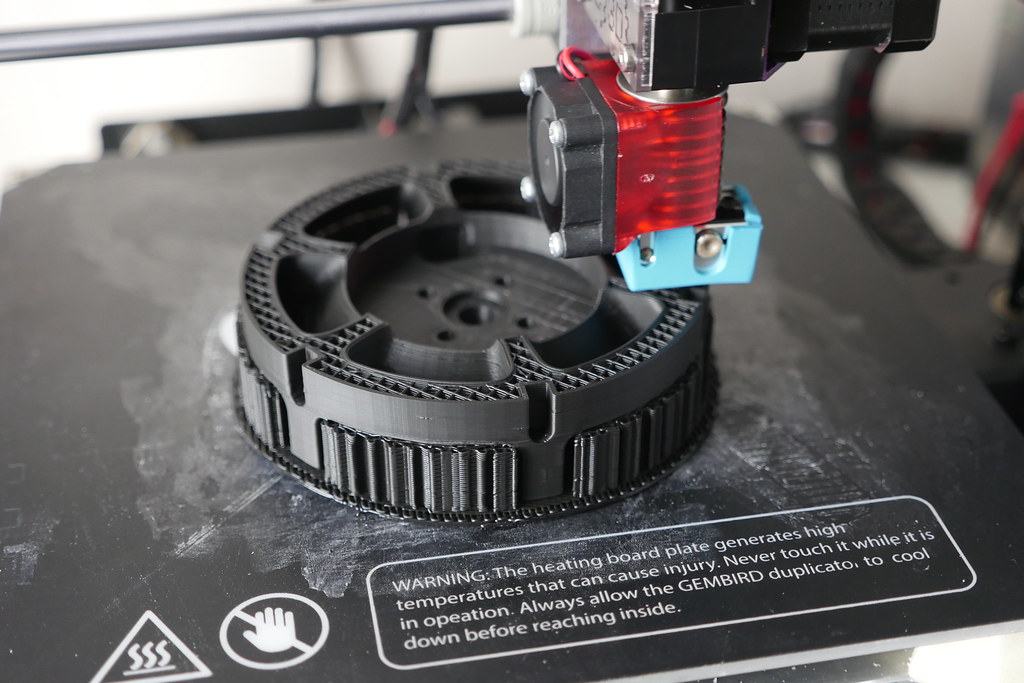 9.5 hours printing later this is the result I got today! 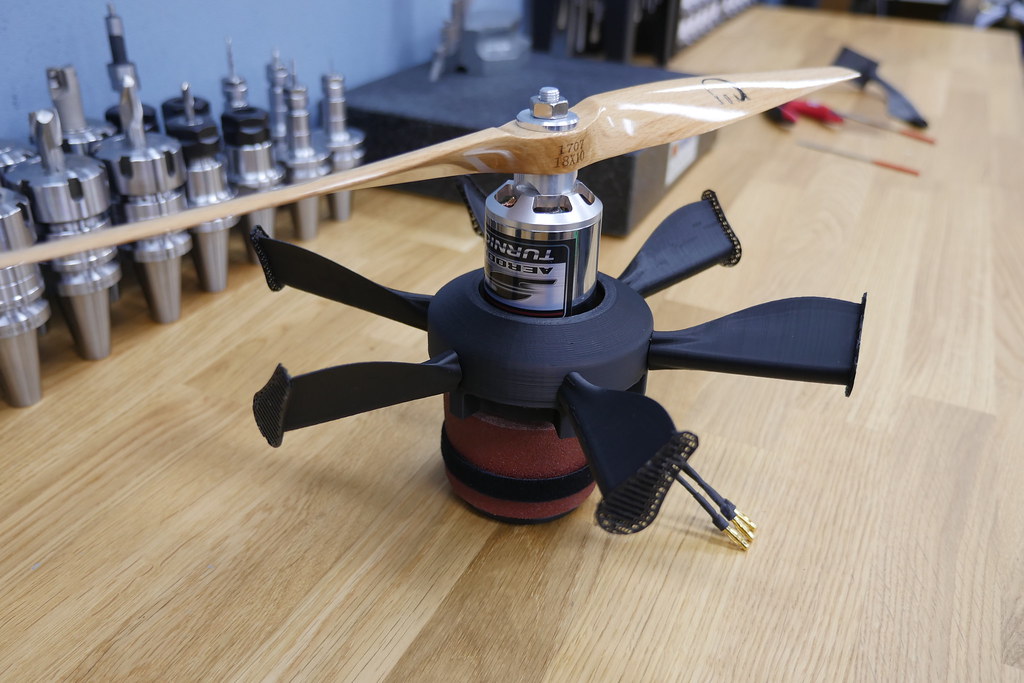 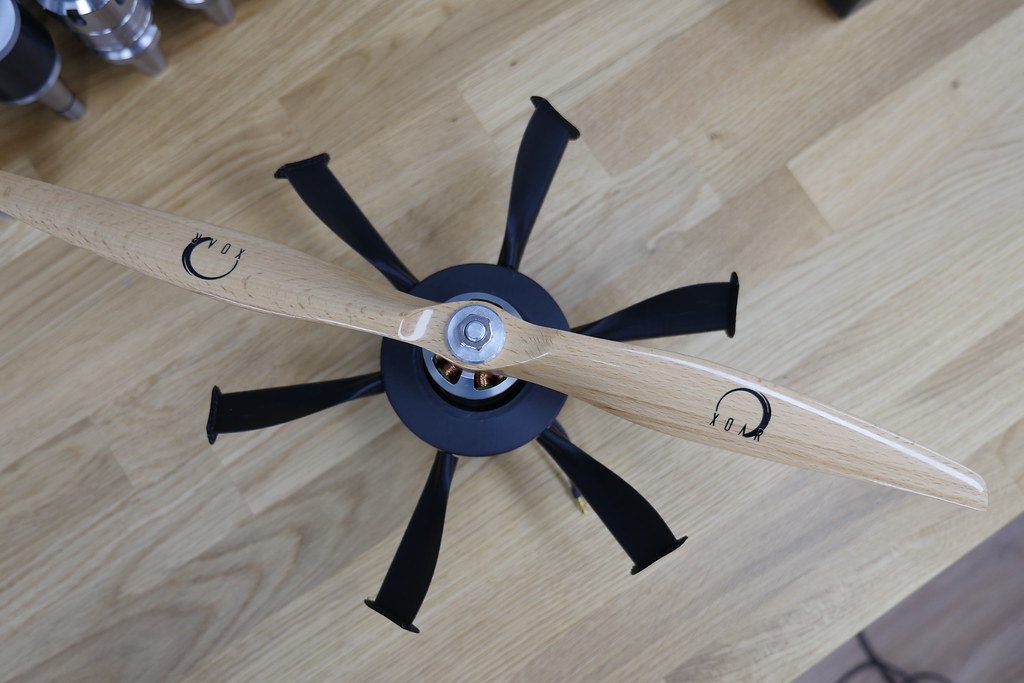 A couple of days ago I made a test print of the cage arm assembly (as a proof of concept). placed in this center hub I can report: my calculations and designs are correct because the prop clearance to the cage is exactly as I want it to be 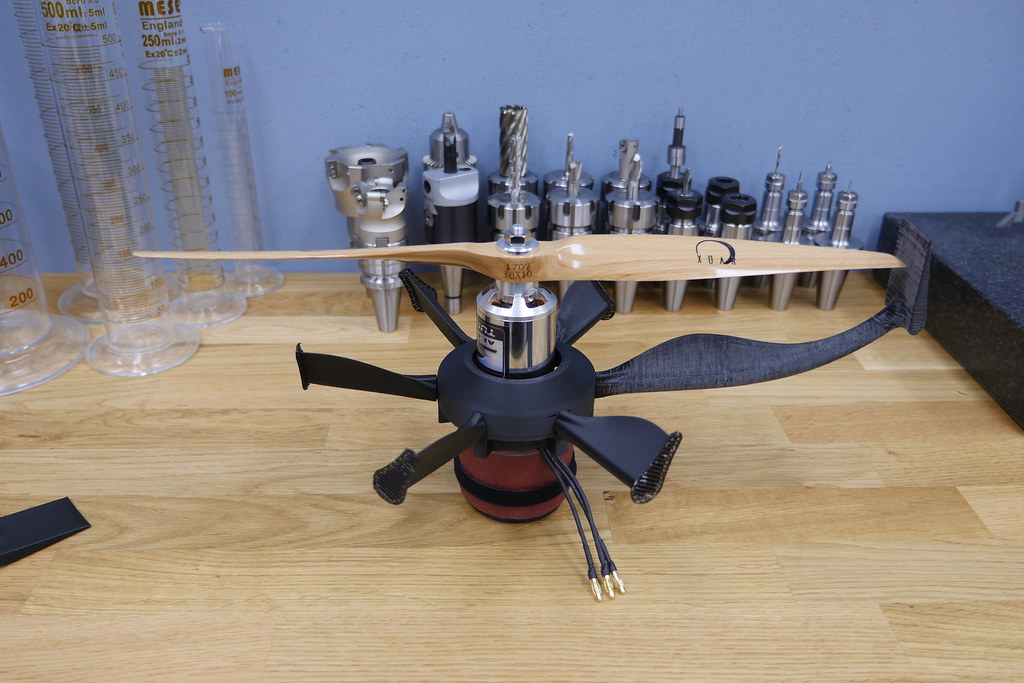 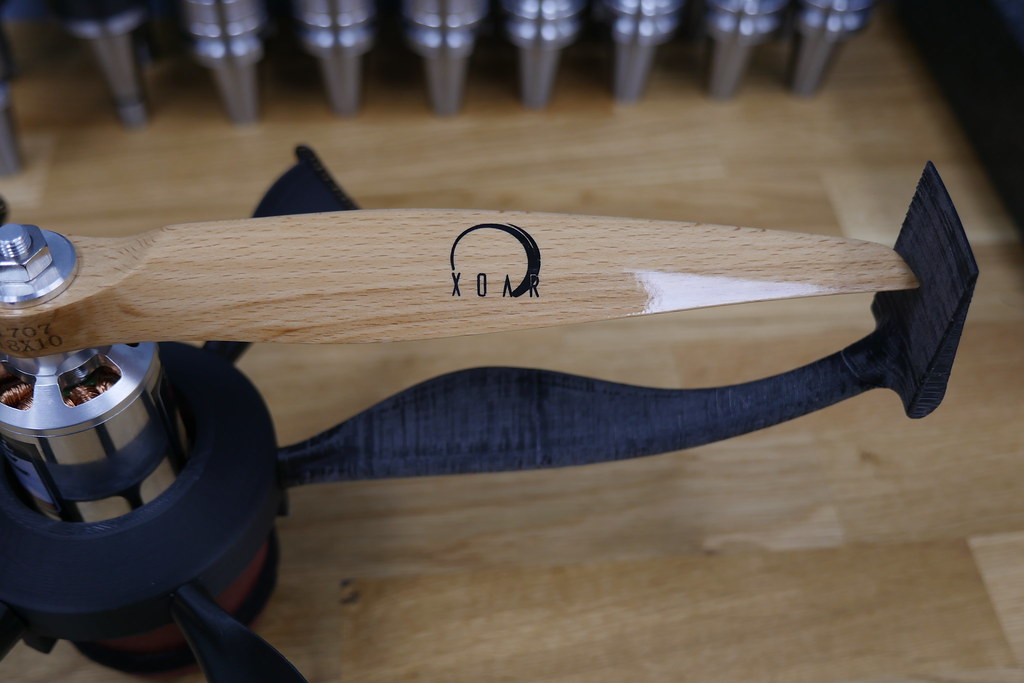 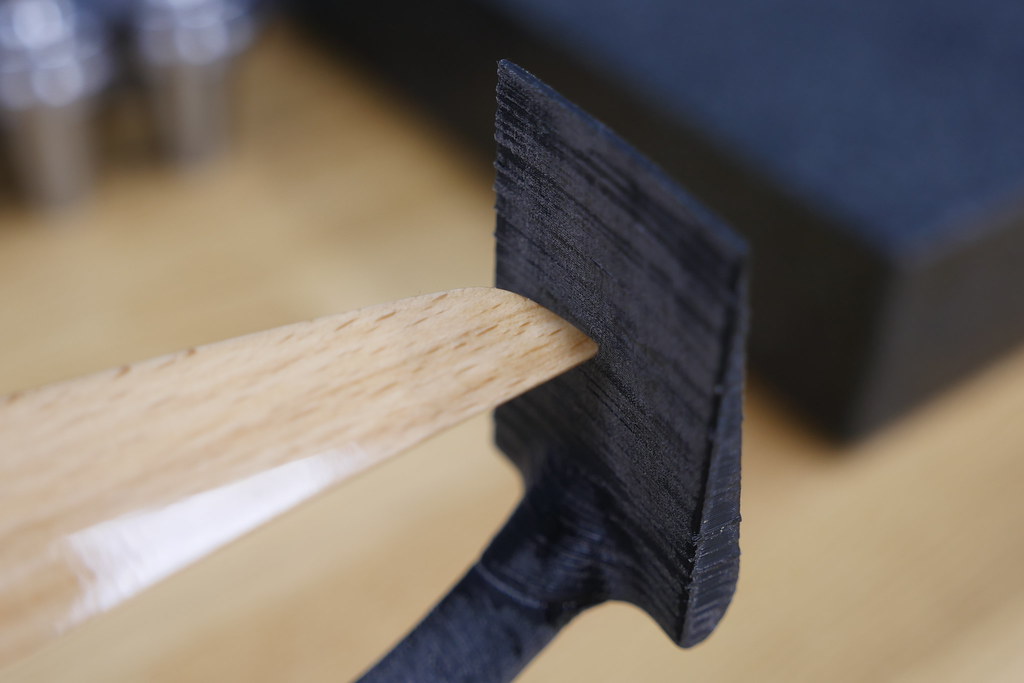 Tomorrow I will print the last parts of the cage and prepare it all for laminating.

#24
it's looking gorgeous. and so many servos! that'll be super manuverable I think.

#25
All those servo's, it should help having the same options as real paramotors (control options)

I changed a couple of things since I started this buildlog First the changes to the electronics:

Now on to some progression, After I printed the remaining parts for the cage I couldn't resist and grabbed a roll of ductape and did a testfit just to check the alignment and fit before I am actually going to glue it.

It looks a bit rough but, it is for a rough idea I promise it will become pretty when I am done with it (maybe even close to the renders) 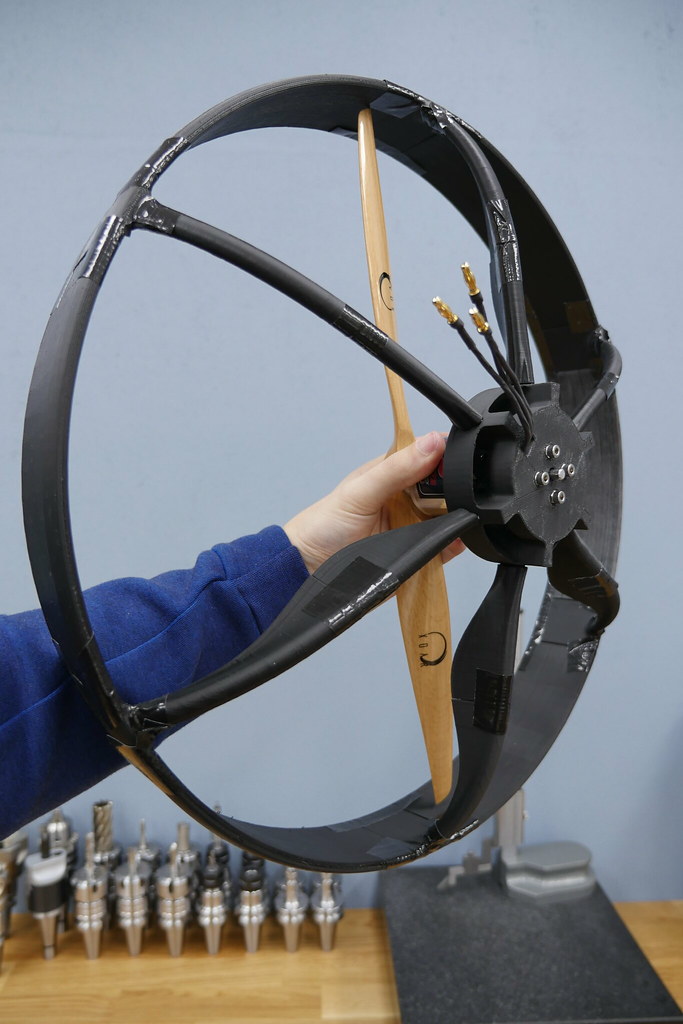 Besides that, I also decided I would to a test run of the system before I got too carried away designing the main frame with all its electronic goodies. So the first flight will be with a simple aluminium plate that will be mounted to the propcage.

This is the basic idea, I will ofcourse add some extra bracing and mounting points for the servo's, reciever, ESC, BEC and batteries. 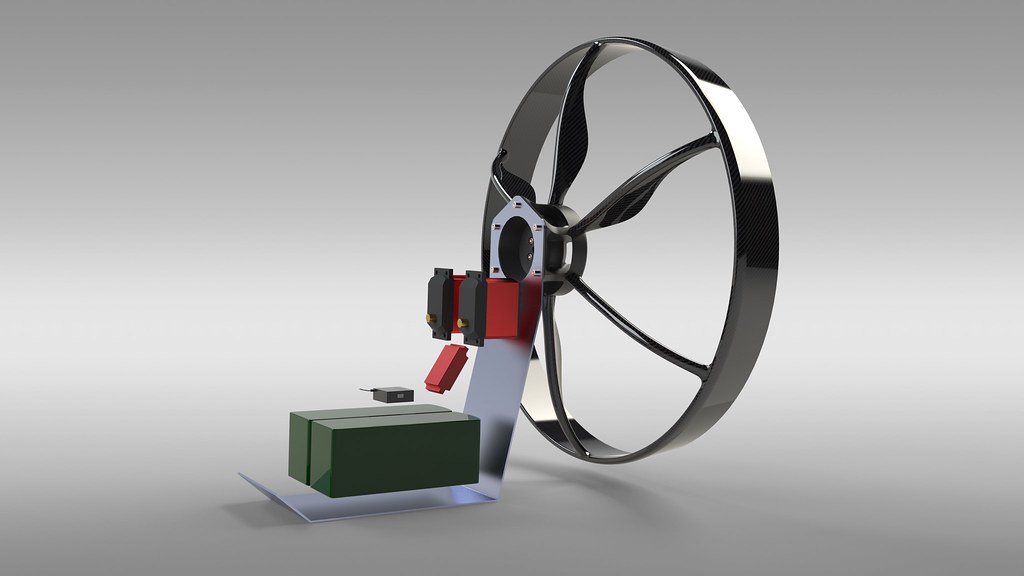 Next item on the list: prepare for glue and laminating!

#26
That looks very nice, good work on designing that (I guess I should expect at least that from someone with "engineering" in the name)

#28
Man this thing is GIANT!
Will you add retracts to it?
In a post on page 2 you showed a few weels with the frame so i think that you´ll NOT belly-land this .
If you make a fixed landinggear it would probably be i your picture and you don´t want to have a big weel in your aerial videos .

I do plan to make a retractable landinggear for it, it has to be custom considering its unconventional shape. I also want to let the back wheels fold to just behind the propguard. My idea here is that this should make it easier for a runway takeoff because the wheels will be well behind the COG, reducing the chance of it flipping over.

#30
Very cool. I couldn&#8217;t believe how big it is! Nice work so far. Look forward to seeing this project take to the skies!

#31
I agree. Seeing the renders was pretty neat for the concept. seeing the actual size of it brings a whole new perspective for what you are working towards. Amazing work so far in both the designing and the work needed to get it printed. If your finishing skills are anything like what you have shown so far I can easily see this looking exactly like the renders. Simply AMAZING. :applause:

#32
Thanks PsyBorg, I really appreciate it! The feedback that I'm recieving is definately motivating.

#33
Besides designing and building I also enjoy making build reports (like this
one for example) and video's about it. I just finished the first video of a
couple I plan to make about this build. I hope you guys like it!

If there are things you would like me to show in more detail let me know!

#34
I had a lot of issues during printing, and I'm also making a video about that to give more insight in the problems and solutions that I made up for it. But there is also a lot I can discuss in a written post:

First, I misjudged the time required to print all the parts quite severely. I did expect that it would take some time but just as you guys I was also a bit suprised when I got to hold the actual parts in full size in my hands (its a larger build than I imagined). The final print time for all the cage parts is:
6x ring section (Total 18 hours)
6x Arm 3 parts (Total 24 hours)
1x Motor mount (Total 9 hours)
1x Adapter block (total 4 hours)

All added up to: 55 hours (excluding prep and finishing time)

The high print time (and slow printing) is partially my own fault. Because of the printer I choose to use I needed to dail back the print speed significantly because of the flimsy frame. At higher speeds the forces on the frame will have a serious effect on the print quality. I used this printer: The first prints came off the machine in decent shape (nothing special but also nothing to be worried about and re-do) but that changed quickly in the prints that followed up to the point that I just needed to stop and figure out what is wrong.

The last print before the I changed things up: 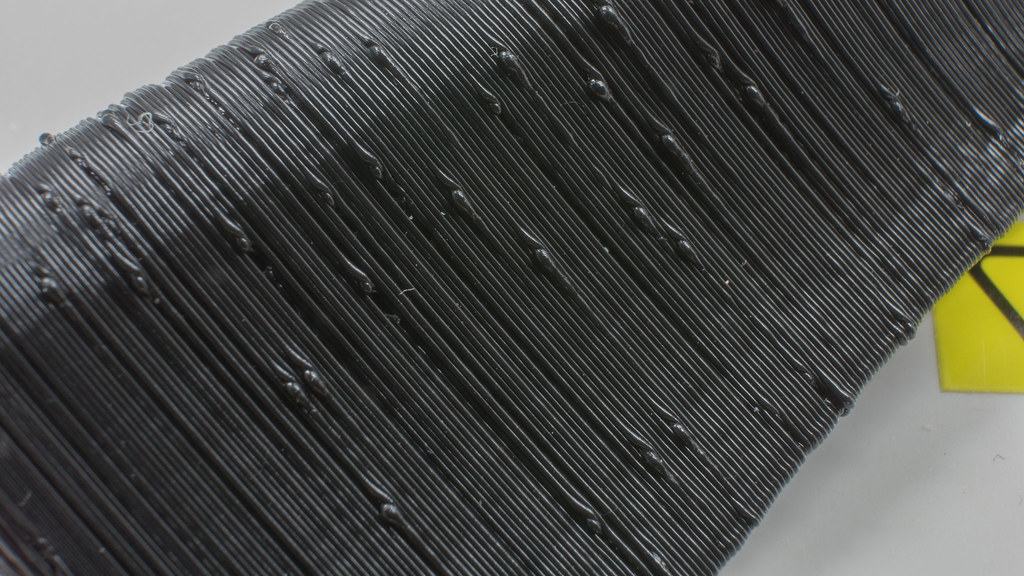 Please note that this picture can give an exaggerated idea of how bad it was. Please remember that the layers are only 0.3mm

Most important things to see:
1 - At the start of about half of the outer perimeter extrusions the actual extrusions starts about 10 to 20mm after its intendedstart. And the other half of the layer starts where it did extrude from the start there is a severe overlap and over extrusion that oozes out of the side.
2 - Layers are not aligned in a nice manner.

2 - Mostly caused by too high of a printing temperature. I did set it above average to compensate for the lack of extrusion strength of the printers extruder but lowered it as a test (from 215C to 205C) and besides that I changed the layer height from 0.3 to 0.25mm to compensate for the more viscous material as the change in layer height would directly affect the force required from the extruder.

After these changes the prints got way better but there was still the issue with inconsistent extrusion due to slipping of the extruder. its drive gear outer surface is not concentric with the axle when fastend correctly giving uneven pressure on the filament. I got annoyed by this and decided to "just pull it all out" and I replaced the extruder and hotend with an E3D Titan extruder and E3D V6 hotend that I had laying in my drawer. After this (and some tweaking to get the new extruder dialed in) the printquality got a lot better: Please note that this picture is also a macro and, remember that the layers are only 0.25mm
Last edited: Jan 22, 2018

#35
I recently visited the friend of my dad that does the tricycle paramotors and told him about how most rc paramotors looks like they just drag the sail behind and don't look like the produce that much thrust.

He told me that it is normal to lead the sail just a bit (like maybe half a sail width in front of it, no more) and that to solve that problem you need to decrease the angle of attack of the sail so it actually flies rather than slowing down the fall while the motor is producing all the lift.

#36
Back from my skitrip, Lets continue this build! #37
@flubutur, thanks for the comment! I did notice that as well. There is ofcourse a significant difference in behavior between RC and full scale (mainly caused by the difference in weight and inertia) but I definately want the wing to fly and create lift instead of working similar to the foamboard planes (that in most cases fly because of the drag)

#38
Just because: A test video I made this week with my new GoPro Hero 6 with the Karma grip. Awesome video quality!

#39
Great quality!
Keep on building this thing!
I would really like to see the images in the air.

#40
Stefs Engineering said:
Back from my skitrip, Lets continue this build!