#1
I just finished my first Bloody Baron (except for the Vert Fin decal) and I can't wait to test fly it.

I used my 3D printer to make a plastic nose and cowling which looks something like a Fokker DVIII, more or less. I can't guarantee you could retrofit the nose to an existing BB, but you could try. I did my best to stay faithful to the original plans, so in theory the aft edge of the 3D p;printed nose should match up with an existing fuselage. I'll post the STL files to Thingiverse in the next few days with a Bloody Baron tag.

Basically I just cut off the standard nose just ahead of the wing leading edge and attached my plastic nose with hot glue. My nose has some rails extending back along the inside of the fuselage to enable me to add a foam board "shelf". My ESC is above the shelf and the battery is below the shelf held in with Velcro and a strap. The RX is fastened to the top of the fuselage with 3M trim tape just aft of the shelf with the Elv and Rud servos aft of that.

I stripped the paper off the wing and used 3M 77 spray adhesive to glue on some home made German WWI lozenge camouflage and then I covered that with clear packing tape. The inside of the wing is bare foam. The wing skins were printed on tabloid sized bond paper in four parts. I attached the skins and clear tape before folding the wing.

The wing has a carbon fiber arrow shaft spar with a 1" wide DTFB spacer pad (no paper) above and below the spar.

I also 3D printed some light weight protective skids for the exposed bottom edges of the fuselage.

With an 1800mah 3S battery positioned so that battery midpoint is at the leading edge of the wing, my plane balances on the standard CG marks. 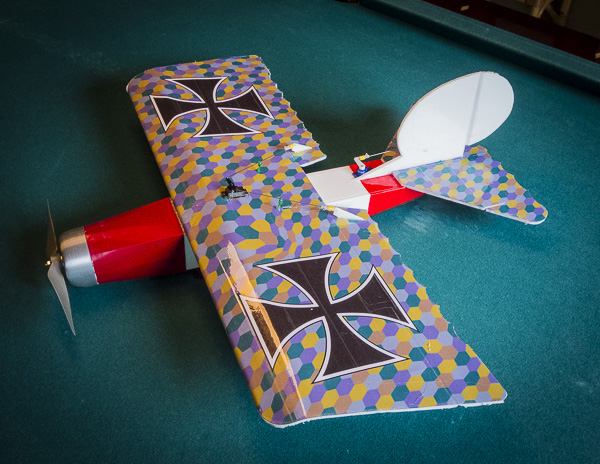 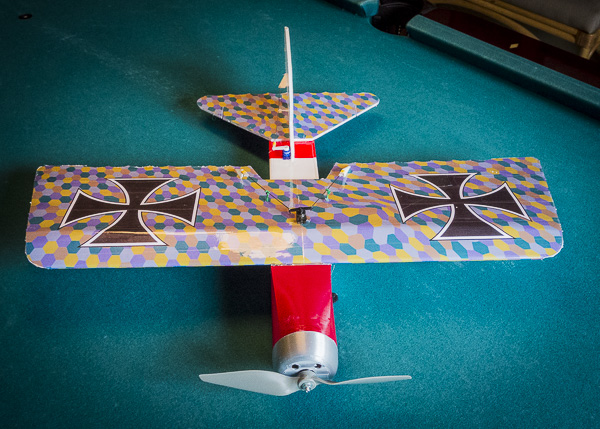 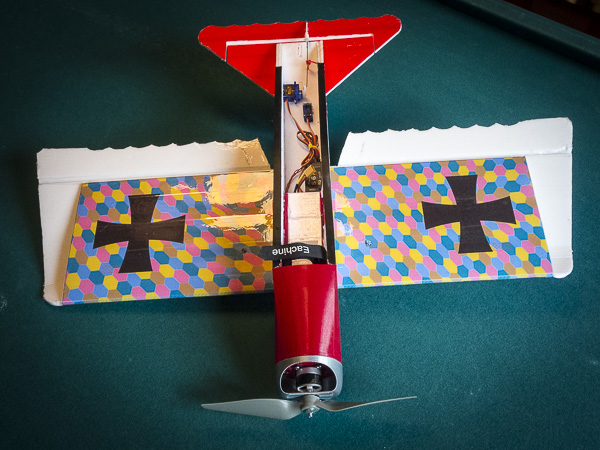 #2
It looks fantastic to me! good job!

I am planning to build it too... I suppose you are hanging the battery on the belly of the plane; if socould you please post some pics showing how battery is mounted to the pod? thx.

#3
Tammeo said:
It looks fantastic to me! good job!

I am planning to build it too... I suppose you are hanging the battery on the belly of the plane; if socould you please post some pics showing how battery is mounted to the pod? thx.
Click to expand...
I have built a number of Flite Test planes, but I have never used a power pod. I keep the gear in the plane until it's too worn out to fly, then I strip out the gear and build a new plane, usually a different model. So I can't give specific help on how to hang a battery on a power pod.

In the case of this plane, the motor mount, nose, and rails are all one 3D printed piece. The rails extend from the firewall to 5 inches aft of the wing leading edge. They stiffen the fuselage sides, provide a mounting point for the "shelf", and provide a gluing surface to help securely mount the 3D printed nose. Using those rails for an attachment point, I cut a foam "shelf" to fit inside the fuselage. It splits the fuselage roughly midway between the top and bottom. Look at the last photo. You can see the red rails on each side of the fuselage and the white foam "shelf". The ESC rests on top of this shelf and the battery is attached to the bottom surface of the shelf using a bit of velcro and the black battery strap you can see in the photo. The front half of the battery is tucked up inside the red plastic nose and the strap goes through and around the "shelf". When cinched down, it locks the battery in place and holds the battery high enough so that it doesn't touch the ground when you land. Those black strips are thin 3D printed skids which protect the bottom edge of the fuselage which would otherwise quickly delaminate after skidding on the grass and/or pavement a few times. 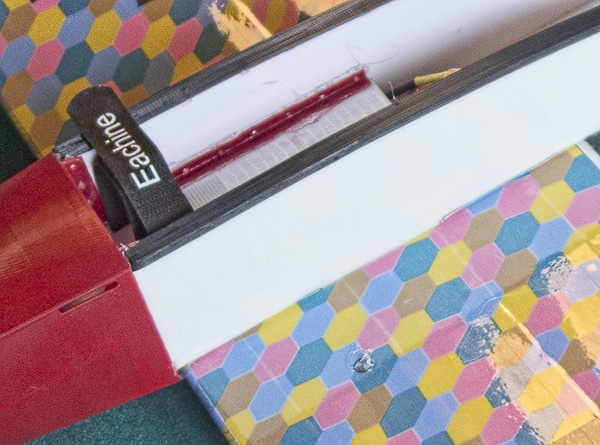 If you look at the above photo, you can see the red rails and the foam shelf which is covered with some fiber reinforced packing tape. Just behind the battery strap you can see a small piece of Velcro. And if you look carefully at the far side of the battery strap you can see how it goes around the "shelf". You can also see the mount tab built into the aft edge of the nose which provides a gluing surface next to the inside of the fuselage. It has small holes to help grip the hot glue. The shelf rails have those holes too.

If you are set on using a power pod, I think you could simply mount the battery according to the Flite Test plans. Depending on the battery size, it looks like you might be using the battery as a landing skid. That doesn't seem like a good idea to me. If I were to use a pod I would build it or modify it so that it held the battery clear of the ground when landing. I'm sure you'll figure it out.
You must log in or register to reply here.
Share: Facebook Twitter Google+ Reddit Pinterest Tumblr WhatsApp Email Link
Menu
Log in
Register