#1
This thread is to document my attempt to build an Alula clone in 3mm FB. Plans will be included eventually for those that wish to attempt to build one. This is a lightweight bird with a leaning to slope soaring.

Included Pic for those who do not read almost every forum post. Here are a couple of examples of the Kulula that this thread will be building. 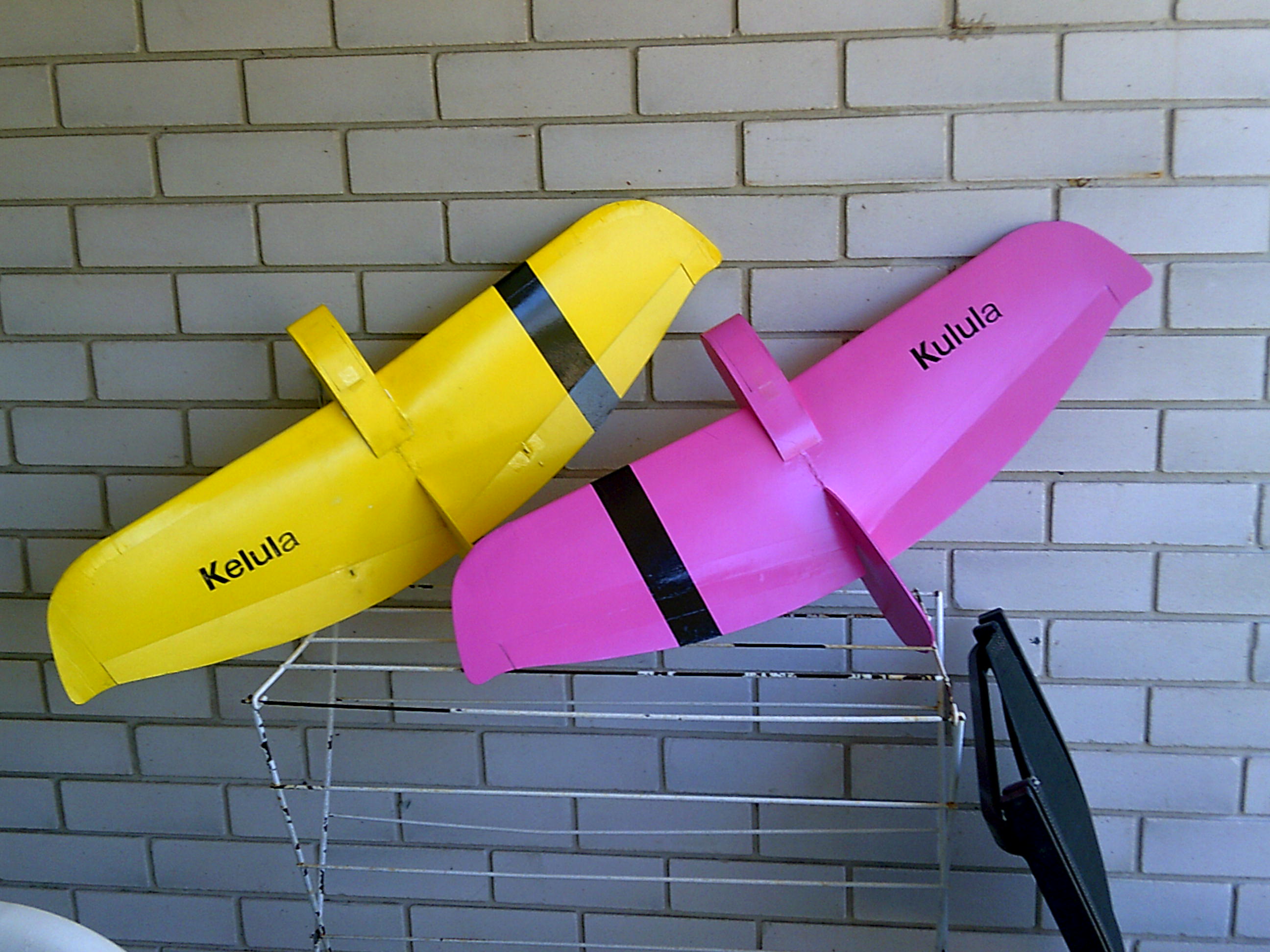 The name Kelula has been transferred to the 1200 mm wingspan version.

#2
Slope soaring sound fun on this plane I've never tried it before.

#3
Every time I read that name I get thirsty. My eyes see kulua but my mind reads it Kahlua. Good luck with the build mate will keep an eye on progress as you always seem to teach me something in your threads.

#4
PsyBorg said:
Every time I read that name I get thirsty. My eyes see kulua but my mind reads it Kahlua. Good luck with the build mate will keep an eye on progress as you always seem to teach me something in your threads.
Click to expand...
The build will be the third as the earlier prototypes have already flown, crashed, and been repaired.

This one is relatively easy but the Kelula at 1200 mm has massive wing area and whilst I have larger birds I do not have any with greater wing area!

Good to have you back!

#5
Updated the first post to include a pic of a couple of the thread subjects.

#6
Today the plans in Beta form. There is another PDF which has other relevant information to assist in the completion of the build along with any special jigs or formers.

#7
Added the build and sanding info sheet to the above post.

#8
Hai-Lee said:
Today the plans in Beta form. There is another PDF which has other relevant information to assist in the completion of the build along with any special jigs or formers.

#9
Looking good! I had a go at making one of these a few years ago, but I didn't know back then that plank planes needed extreme nose heaviness to fly properly. Where does yours balance?

#10
Jackson T said:
Looking good! I had a go at making one of these a few years ago, but I didn't know back then that plank planes needed extreme nose heaviness to fly properly. Where does yours balance?
Click to expand...
I have flown them with the balance point 25mm back from where the nose glues to the wing LE. I feel it still needs to be a little further back and so the next flights will be attempted at 26 mm.

I need to get a high start so that I have the time to get the exact balance and reflex numbers but, sadly, that may have to wait until the build is finished!

#11
The build is simple! Firstly cut out all of the parts. Next remove all of the paper that the plans specify. Finally do the bevels and shaping of the wing panels and the nose cover piece as required.

One of the wing upper skin panels with the paper removed and the bevels completed, Do the other wing exactly the same, (though a mirror image of course).

Do the wing tip curves prior to proceeding.

A matching pair of upper and lower wing panels ready for joining.

Internal view of a pair of joined wing panels ready to accept the wing spar.

The nose or electrics section is also simple. Here is a pair of side panels that have been sanded to be exactly the same size and shape.

Nose cover piece cut out as per the plans and shaped to match the side pieces contours. Also with the channels cleared.

A view of the nose cover piece showing the battery hatch open.

That is all for now! Sorry to leave you hanging, (Especially on the wing), BUT I need more spar material. There is always something!

The nose is currently gluing so I will add the final series of pics of the nose in the next post!

#12
Well, I have been quite busy of late but I finally got back to this design.

Took the original prototype and fitted a park 250 with a folding prop and a 500mA 2S battery.with a HK 10A ESC.

We needed some airtime to be able to verify the wing CG and without much wind and NO close mountains or cliffs a motor was the only way to go. It flew very well from the very first launch though it is a little nose heavy still. Even though the tail had a curve giving effectively right rudder I was able to trim it for level flight with the aileron trim and it was happy to putt around on 30% throttle without losing any height all.

The owner is V Happy with the performance and one of the other, (Very experienced), members of the club was handed the Transmitter and after he landed it he said straight that he wanted one and was willing to pay for it NOW! Generally a great rave for the bird.

I few changes needed though. The nose of the fuselage needs to be brought in on the sides to better match the spinner, (less drag), and a BBQ skewer is going to be embedded in the fin to keep it straight over time.

May even try fitting a cheap stabilizer in the next one to see how it performs with stabilization.

Flight performance was really effortless BUT it was quite agile in pitch and a little slow in roll at low speeds. I normally set the deflections quite high in pitch anyway as that is my preferred setup. It would glide with a gentle glide slope and with power applied it was a fully aerobatic bird. With a moderate usage of full throttle we managed to get 10 minutes of flight time. One thing though is with the fuselage drag and the light weight it did not like penetrating the wind too much but a little power overcame that issue.

Will soon apply the lessons to the second prototype with the alternate wing profile and see how it performs.

Will have video when the person who recorded it, (the plane's owner), gives me a copy.

#13
Hai-Lee said:
The owner is V Happy with the performance and one of the other, (Very experienced), members of the club was handed the Transmitter and after he landed it he said straight that he wanted one and was willing to pay for it NOW! Generally a great rave for the bird.
Click to expand...
That is awesome!

#14
Reworked the second prototype, (narrow wing profile), to have a motor and folding prop spinner.

Also adjusted the fuselage length slightly and modified the build procedure to make it far far easier to build.

Second prototype has flown albeit rather nose heavy, (the design battery was not available on the day. It was extremely sensitive in pitch and had a good rate of roll. Flew quite well otherwise. Once the prototypes are sorted I will update the plans and the build pics!

I must remember to ask for the earlier flight video

Have a Merry Christmas and lots of fun!
D

#16
daxian said:
@Hai-Lee any more info on this project....
Click to expand...
Sorry about the slow response but the internet has just been fixed here, (yet again!).

Anyway yes there has been progress and further developments. The first 2 prototypes have both flown and the thicker wing profile has given best flight characteristics.
Both prototypes have had a motor fitted to enable some real altitude to be achieved, (we have no slope soaring places anywhere near).

As gliders the original design was very light and had issues penetrating into the wind and even with motor etc fitted they still tend to float and need motor power to fly into the wind.

A simple 3mm Balsa spar has been proved to be far superior in strength and rigidity than the original FB spars.

Both prototypes have kissed the ground and so far only the battery compartment/fuselage has required repairs. The wings are very light and surprisingly strong for their weight.

Both prototypes have a minor level of dihedral and the next development prototypes may be without dihedral for performance comparisons.

In flight the birds are extremely pitch sensitive, (still working through the elevon settings at this time). We had 2 weeks of torrential downpours here and the ground is still waterlogged and the grass at the fields is like a forest!

A moderate wing tip curl can be obtained relatively simply though tighter curl is proving extremely difficult without cutting the FB and gluing.

Original battery compartment/fuselage?, is simple but poor in appearance and so it is subject to redesign or even the consideration of alternate build materials.

The program is on hold at this time as the owners of the prototypes are on holidays overseas but the project is still active and the flight testing and the development is to continue until something of retail value is obtained!