#2
Geno, that's an awesome idea! What fun that would be to watch. Only I'd step it up a notch. It is FliteTest afterall.

One vehicle that does all of it. The land course sufficiently difficult so you can't just taxi a plane through it. Transitioning to water with wheels might be asking a bit much (or not, those guys can be ingenious). So they get to swap out parts. But it is timed and part of the race. Of course, it has to be foamboard. Nothing else will do. And, yep. It's gotta fly a course, not complicated, maybe an oval or figure-eight around markers.
G

#4
There are quite a number of seaplane type models that can take off and land easily from grass. It would all depend on the nature of the terrestrial course.

#5
quorneng said:
There are quite a number of seaplane type models that can take off and land easily from grass. It would all depend on the nature of the terrestrial course.
Click to expand...
Motocross dirt track!

#6
you guys should build a mario cart that can drive and fly. i threw this challenge out for my club months ago after seeing the FT video. come race day, each racer had to complete a ground slalom course, then take off, complete an air circuit, then land, and do it all over again. race was 3 laps, first to complete wins! it was stupid fun, no one thought we would be able to actually fly, and all of us proved them all wrong. granted we had a mixed result, but each was great on the ground, and each was able to "fly." we had hoped for 6 racers but 3 died prematurely during testing and were unable to compete. 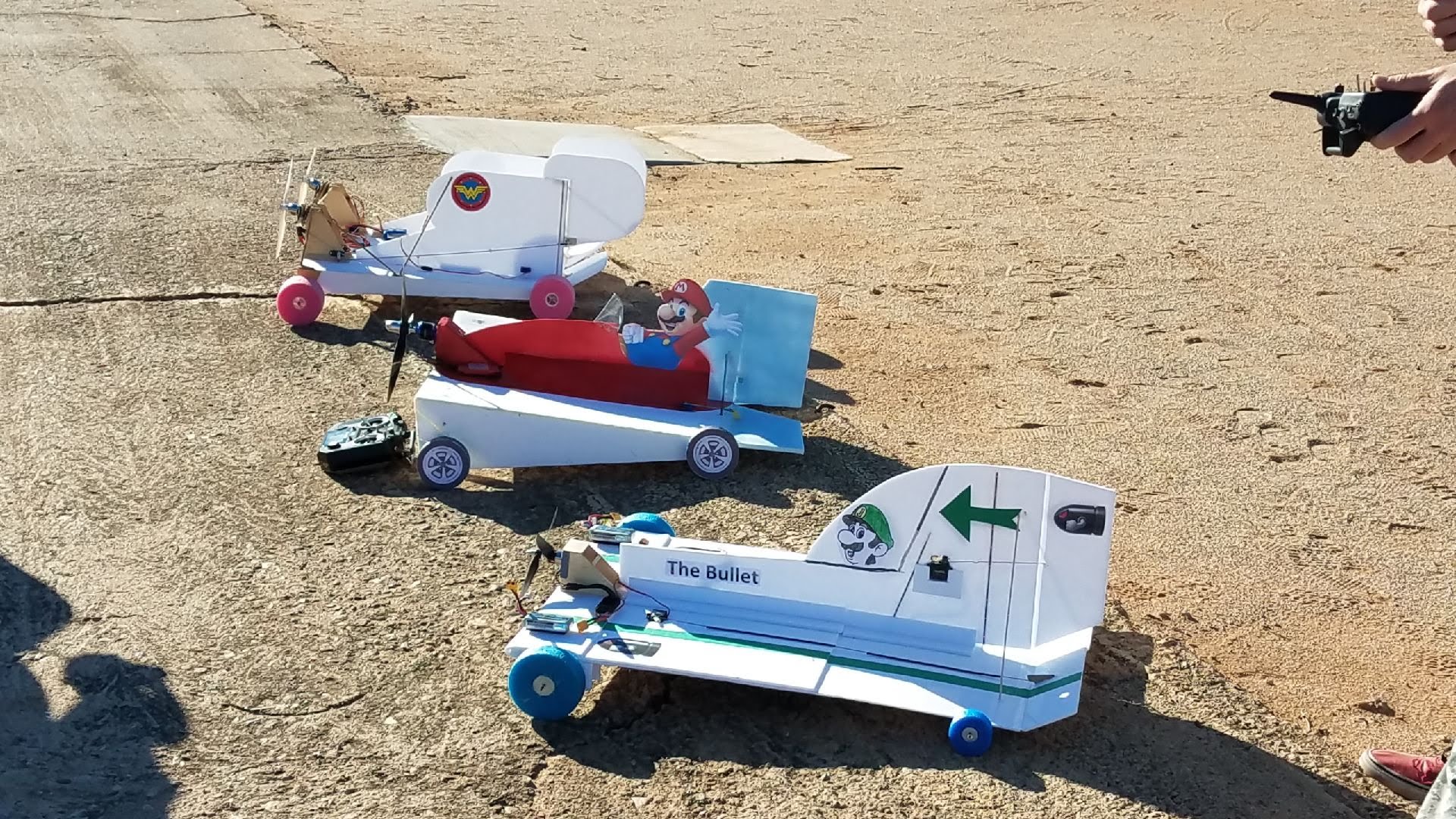 i had built 4 diff prototypes and each had mixed results. after completing the build of the "Bullet" i did not even try to test fly it (ref the 3 other guys), and instead just showed up and went for it. thankfully my previous work paid off and i was able to jump into the lead right of the bat, then complete almost 3 laps before my prop broke and i was unable to take off again.


it would be cool to add a water challenge, but most fields just don't have the availability.

#7
mrjdstewart said:
it would be cool to add a water challenge, but most fields just don't have the availability.
Click to expand...
IIRC............wasn't the "new" place's former life a golf course? Should be plenty of water!!!

Pretty cool race idea you had too, I believe I'd have been laughing too hard to compete!!

#8
Geno said:
... I believe I'd have been laughing too hard to compete!!
Click to expand...
that was the whole purpose! make people question what they think is possible, and giggle the whole time.

or maybe challenge them with a frankenplane?

made from 2 of my own crashed delta wing design, the tail of a crashed radian glider, wing supports from a dynam waco biplane, bottom motor from same waco, top motor was from one of the wings (f-pack), had twin upper and lower ailerons controlled by 4 servos (all salvaged), and flown by 2 pilots.


just as many giggles.