Mentor
#41
That wing looks awesome. I love that pattern.

My speedbuild kits just shipped out, so I should have 3 Mighty Mini Warbirds in short order.

My Zero is wearing the always stylish sharpie paint job. 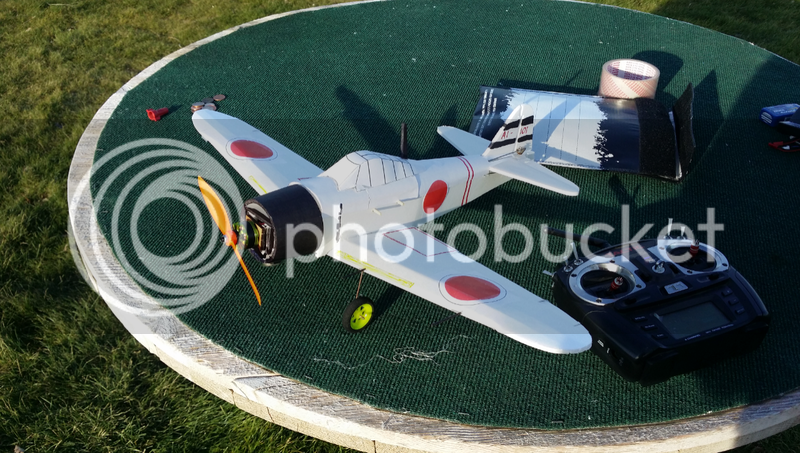 #42
Not using the heat shrink shouldn't save enough weight to make removing it worth it.

I don't recommend the Multistar Elite, but the Lumenier motors are pretty nice: http://www.getfpv.com/lumenier-rx2204-14-2300kv.html.

Good luck and have fun

#43
The-One-Who-Never-Crashes said:
I don't recommend the Multistar Elite
Click to expand...
can you explain why?

#44
Not a really big deal, just that the QC on them is sometimes really inconsistent.

david_isr said:
can you explain why?
Click to expand...

#45
Just finished the wing for my mini Corsair. I used 5-gram servos as recommended, but instead of the Emax ES9051s shown in the build video, I used HXT500s because I had them on-hand. Turns out, an HXT500 is about 3mm fatter than a ES9051...so they stick out above the wing and you have to dremel down into the bottom wing board to get them flush on top. Fair warning for HXT servo users. I never really like the HXT500s as much as the HXT900s anyway...they tend to be noisy and jittery. I'll have to pick up some of the Emax ones with my next HeadsUpRC order so I can give them a try next time.
D

#46
what kind of 18-20A ESC do you recommend for me that is lightweight and not too expensive ?
i saw the Afro Race Spec Mini 20Amp but i dont understand if i can use a ESC that is designed for a Multi-Rotor....

#47
That one will certainly work.

david_isr said:
what kind of 18-20A ESC do you recommend for me that is lightweight and not too expensive ?
i saw the Afro Race Spec Mini 20Amp but i dont understand if i can use a ESC that is designed for a Multi-Rotor....
Click to expand...
D

#48
without any modifications? (flashing the software)

#49
Without any modifications. You might have to solder on some bullets, but that's all.
In general, there are three categories of FT planes: minis, smaller swappables, and larger swappables.
These use the A, B, and C packs, respectively.

What you have right now is the equivalent of a B or C pack. To make a mini, you'll have to get smaller components, so I wouldn't say that you're wasting your money.

Let me know if you have any more questions.

david_isr said:
without any modifications? (flashing the software)

#50
Im planing on using my sk3 motor, so i dont need the whole pack, also i must say that the pack is very expensive (in compare to buying similar parts at hobbyking)...
so im going on the sk3 motor,1000mAh lipo and the Afro Race ESC on a 130% plane (160g with the receiver and servos )
also what prop do you recommend for this setup? i have some new 8x3.8 props i dont use -are they too big?

#51
david_isr said:
without any modifications? (flashing the software)

also i dont know if im wasting money on parts that i dont need.. this is my 4th FT build but my first mini , so i dont know if my electronics are light enough. i know i need to buy new lipos cuz i have only 2200mAh, also i need some 5g servo ( i have only 9g)
but i dont know about the ESC - I have a 25A one and i'm afraid its a bit too heavy (28-30g) in compare to the 11g Afro Race
( i am building the 130% scale Corsair and i want to use a 72g 1000mAh lipo)
Click to expand...
If you're doing a 130% build, then you should use 9g servos not 5g. I was even debating using 9g servos on my regular mini-size build, since I will be equipping it for more speed than stock. The regular mini-size FT Corsair is nearly the same size as the Skyangel Corsair funfighter, which has 9g servos.
D

#54
and what about prop size?
what will be best with the SK3 motor?

#55
I don't have that motor, but I would guess that the 8x3.8 will probably work, based on positive reports for that motor with an 8x4. Then if you find the top speed a little slow, you can go down in diameter and up in pitch.
J

#56
They say in the video this can be built from one board, is that A1 size (roughly 20" * 30" which is supposedly dollar tree size)? Looking at the plans it looks like it will take 2 boards at that size.

EDIT: Also Where do people recommend getting foam board in the UK, currently getting it from the range at £4 (~$6) which seems expensive when you can get it for a $ in america
Last edited: Dec 18, 2015
D

#57
david_isr said:
and what about prop size?
what will be best with the SK3 motor?
Click to expand...
My favorite if 8X6 APC style good balance of power and speed for most 800m sized. I am just a park flyer so I'm not a crazy speed person like Nerdnic and company. 9X6 is good but you do have to deal with a little more torgue issue.

If you need to order props anyways usually just a buck so I'd get a couple 7X6, 8X4, 8X6, and 9X6 APC style and see what you like as a personal preference.

This is the only 800m sized plane though where it just felt more comfortable with 8X4. I will tell no lie, I'm the least comfortable with this plane than others. If you get in trouble this one ( for my skill level ) is harder to correct. My confidence in flying has been humbled wit this plane. In the end though, it will make me better. I haven't come home yet without having to make a repair of some kind.
Last edited: Dec 18, 2015

#58
jmta94 said:
They say in the video this can be built from one board, is that A1 size (roughly 20" * 30" which is supposedly dollar tree size)? Looking at the plans it looks like it will take 2 boards at that size.
Click to expand...
Yes the amount of foam board you need can easily be done from one 20"x30" board of dollar tree board. I even had about an 8"x10" chunk left over from that one board. Then there are additional pieces you have to cut from cardboard posterboard, not foam board...maybe you were including those pieces in your estimate of total foamboard area?
J

#59
herk1 said:
Yes the amount of foam board you need can easily be done from one 20"x30" board of dollar tree board. I even had about an 8"x10" chunk left over from that one board. Then there are additional pieces you have to cut from cardboard posterboard, not foam board...maybe you were including those pieces in your estimate of total foamboard area?
Click to expand...
Ah that would be it didn't take too much of a look at the plan just looked at the sizes. Silly me! I see now in the small print it says foam board and poster board on the build. Looks the same with the corsair, maybe a bit tighter. Plan on building both of these on monday with a friend.
Last edited: Dec 18, 2015

#60
I finished and maidened my FT mini Corsair this morning. Photos attached...including a couple of photos side-by-side with my Skyangel Corsair funfighter, which is about the same size. I put exactly the same power system in the FT mini Corsair as I use in the Skyangel -- i.e. a Turnigy Aerodrive D2826-6 2200kv, with a 30A ESC, a 3s/850 mAh LiPo, and a 6x4 prop.

I originally planned to put a motor only a little bigger than the motor recommended by Flitetest in my FT mini Corsair, but when I was about finished with the build and did a preliminary CG check with a 29-gram motor and an 18A ESC, it was way tail-heavy. So I figured, instead of putting dead weight in the nose, I would rather put a bigger motor. I expected it to come out a little nose-heavy with the 50-gram Turnigy motor and 30A ESC, but to my surprise it came out spot-on the recommended CG! Which is fortunate, because the design of this plane provides no room at all to move the battery around for CG. To secure the battery, I installed a velcro tiedown strap, securing the strap into slits I cut into the "O" shape in the top of the wing . The recommended skewer-stick battery-securing method would not work because the 850 mAh LiPos that I am using are too fat. The 30A ESC fit nicely on the panel above the power pod (photo).


The FT mini Corsair flew just fine, but with this power system, it seems that it could use a tad of downthrust (it has none built in), so after I got home I shimmed in a little "down," and I'll see how that goes next time. OTOH, the considerable amount of right-thrust built into the power pod on the plans was apparently just right (and identical to the Skyangel's right thrust angle, as can be seen in the last photo), since I experienced no torque issues during the two batteries that I flew. Peter was right about how careful you need to be with the elevator. Pull too much elevator, and the plane will do a snap. The ailerons on the other hand I found to be much too mild on the recommended throw (on the throw gauge included in the plans). Looking forward to more test flights on this cute little Corsair.