#1
Alright everybody, thought this one up the other day, concept is simple:
Build Fly Crash Share

2.Ask for Help and Ideas

3.Share your mods, repair techniques, how you fixed or made replacement parts. Pros/cons. Maybe you purchased a replacement from a different manufacturer or for a different aircraft and it works.

Let us know, Share your experiences...or should I say expertise.

I'm looking to have this as a quick exchange and reference guide for everyone, if you have a full build log or something of that nature be sure to post a thread and add the link!
Last edited: Mar 17, 2014

To start us out, I've been working on an FPV platform built from the FT-Simple Soarer. Building v2 prompted by a crash the destroyed the Fuse. This one should be much stronger.

Windy Maiden on the FT Delta, I ended up out of control hitting a street sign. But colored packing tape does wonders. BTW the black dollar tree foam-board is junk!

I think this is beyond glue and tape patching!
C

#5
Nice build, I may have to copy ya and give that a try. I built the FT Simple Soarer and love it, it defiantly needs more down thrust though. I had an issue with the elevator getting weak. View attachment 20187 View attachment 20188 Here is the before and after. I was getting more movement on one side than the other, so I used a bbq skewer and hot glue to strengthen it.
C

#6
If I have any advice to give it would be on my FT-22, one of my favorite planes... Make sure your RX is firmly attached, the double sided foam tape I used lost its effectiveness in the cold while I was flying last week. It came loose went into the prop, one of the servo leads wrapped itself around the motor and finally pulled the RX free. Plane spun in from about 50ft
View attachment 20189 that plane is resilient actually appears to be fine, once I pushed the foam nose back out from the inside, but it was an expensive crash because the RX went flying and is still laying in the field somewhere.
C

Looking for some pointers on this one, I don't know what I'm doing when it comes to balsa yet. I hit a tree pretty hard so I need to fix the leading edge as well as the profile of the fuselage, it seems to have a weak point, the tail wiggles...it does still fly
C

Looking for some help on this one as well, bought it crashed. It was mostly repaired, but seemed as though the cg was aft. I tried everything I could to more it forward. But after a hand full of flights it ended up coming down pretty hard.
O

#9
I had to knock my FT22 out of a tree approx. 40feet. Took a 20 extension pole and 2 10' pvc pipes to reach it all while standing on a 6 foot ladder. After I broke ti loose it glided down right next to me. as you can see it was dark took me about 20 minutes of fussing with those poles to get it out.

I was flying in too much wind with too much motor (for my experience) in too small of a park. I have since built a second one. reinforced the forward facing edges with Skewers, found a bigger park to fly in and a motor that is stronger than the blue wonder but not as strong as the beef. (Turnigy d2822/14 1450kv) I hope to madien in the next couple of days weather dependant

Proximity 3d...Hit myself with the wing.
4

#11
Hotrod parkzone Gunfighter 120mph P-51, Elevator shredded, lost control, and managed to hit myself with it. A few bruises but no real injury. 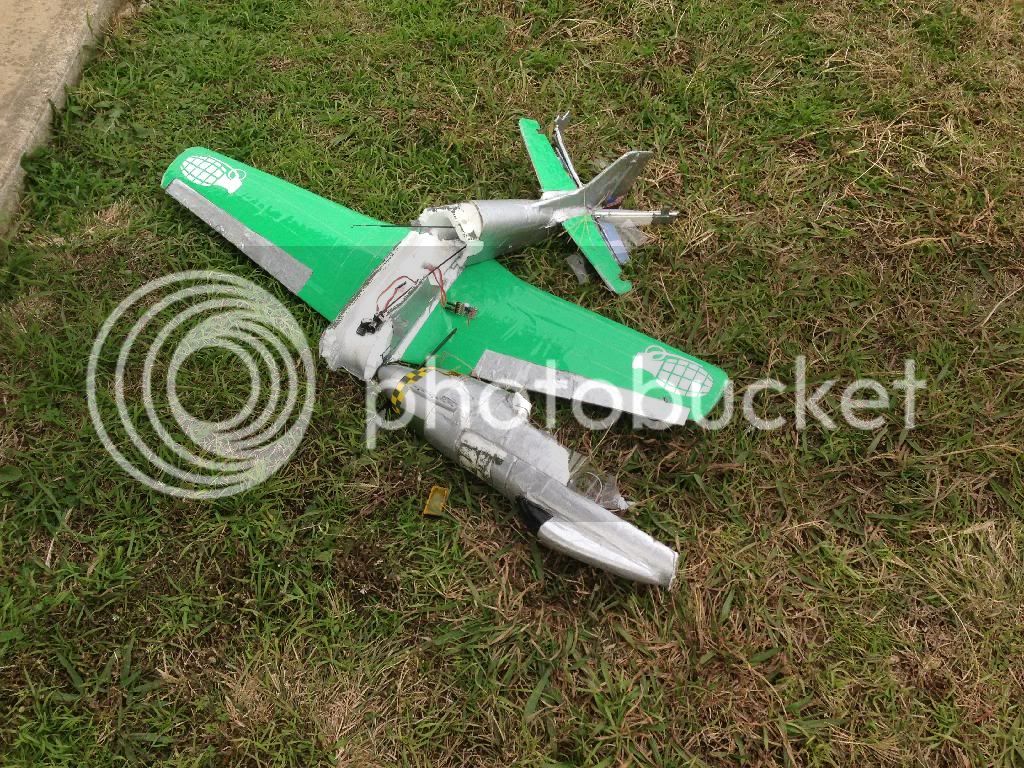 Scratch built A-10 out of fan fold foam in four days, It was so much fun to fly, I forgot to land rand out of battery and stalled out. 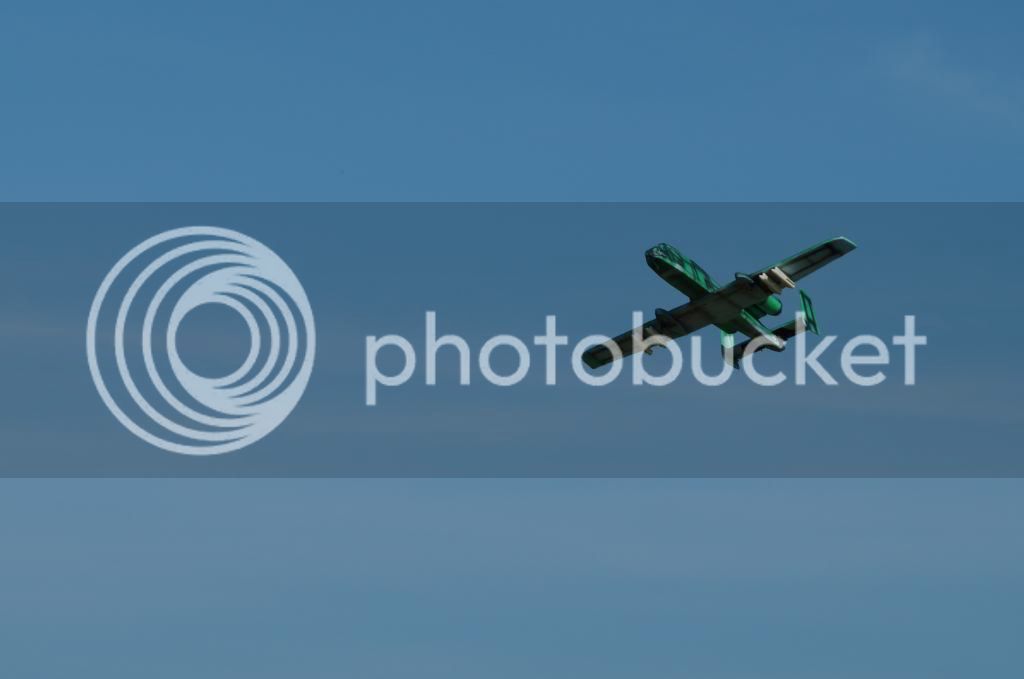 I rebuilt it at the field and 15 minutes lator was back in the air. I’ve been flying her for almost a year now. 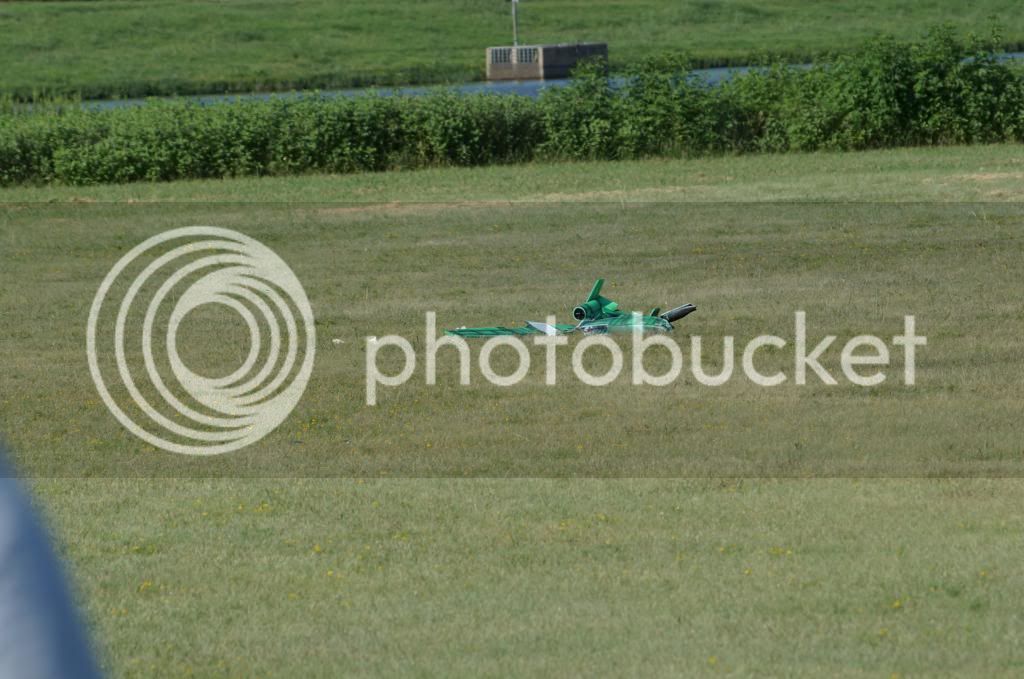 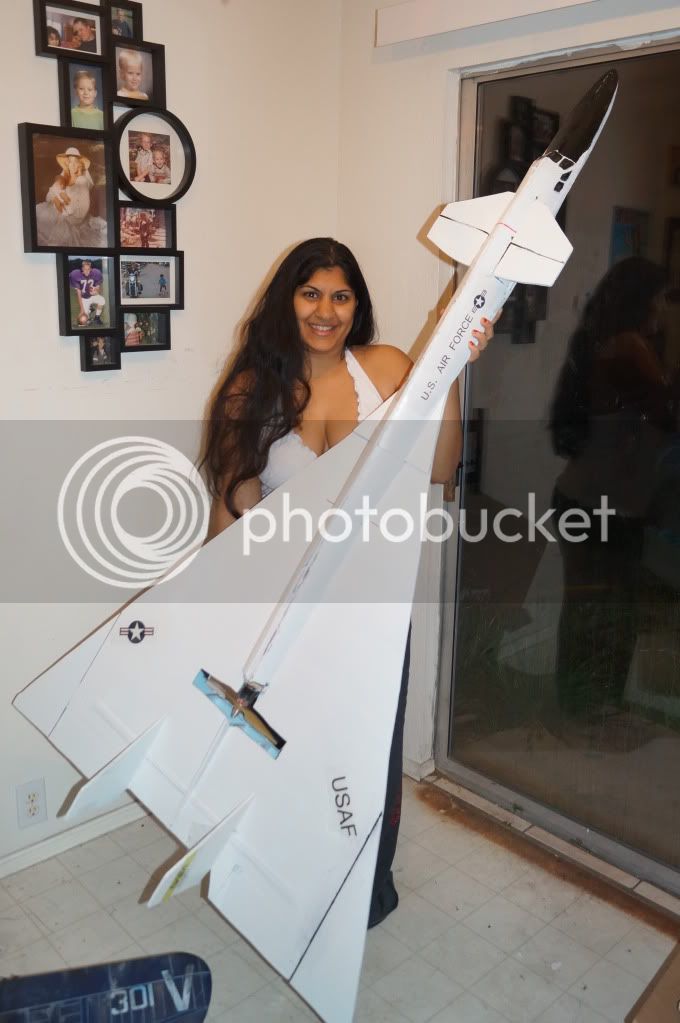 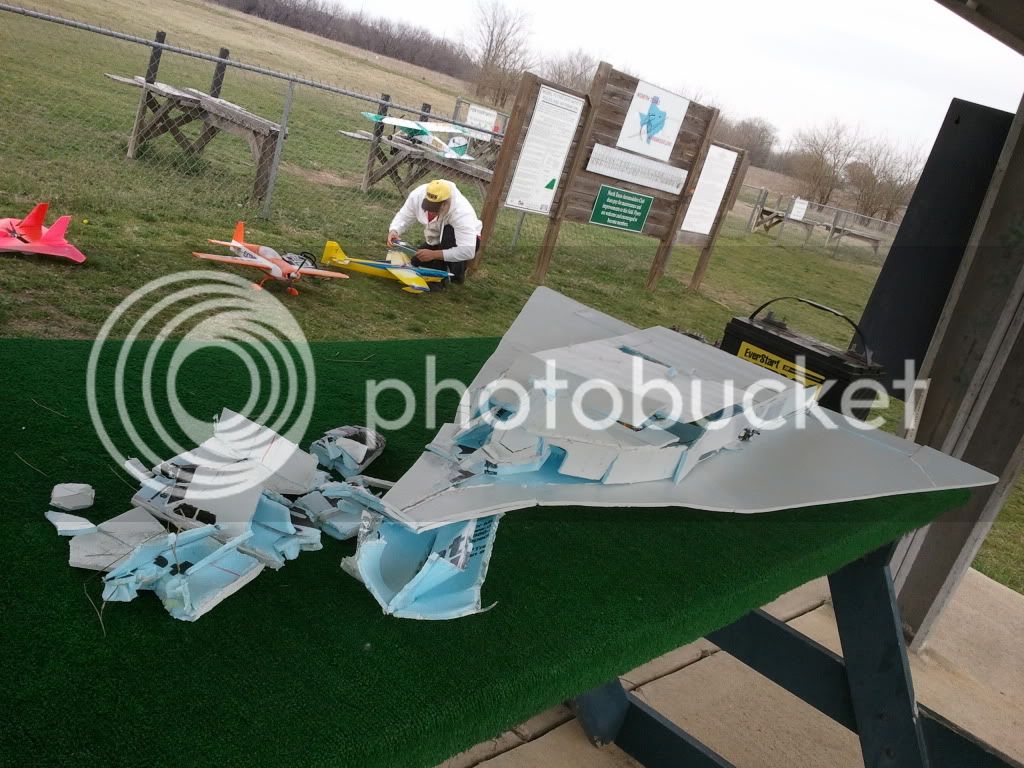 F14 profile that my whole club dogfights with. 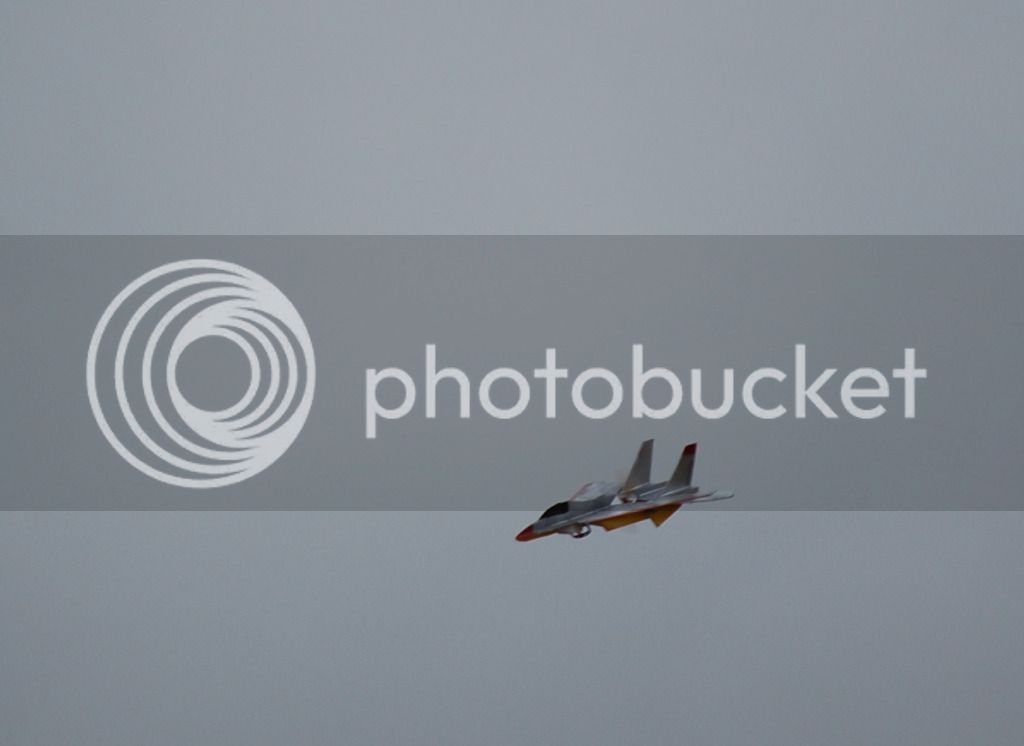 Lost a dogfight with a barb wire fence at 80mph. 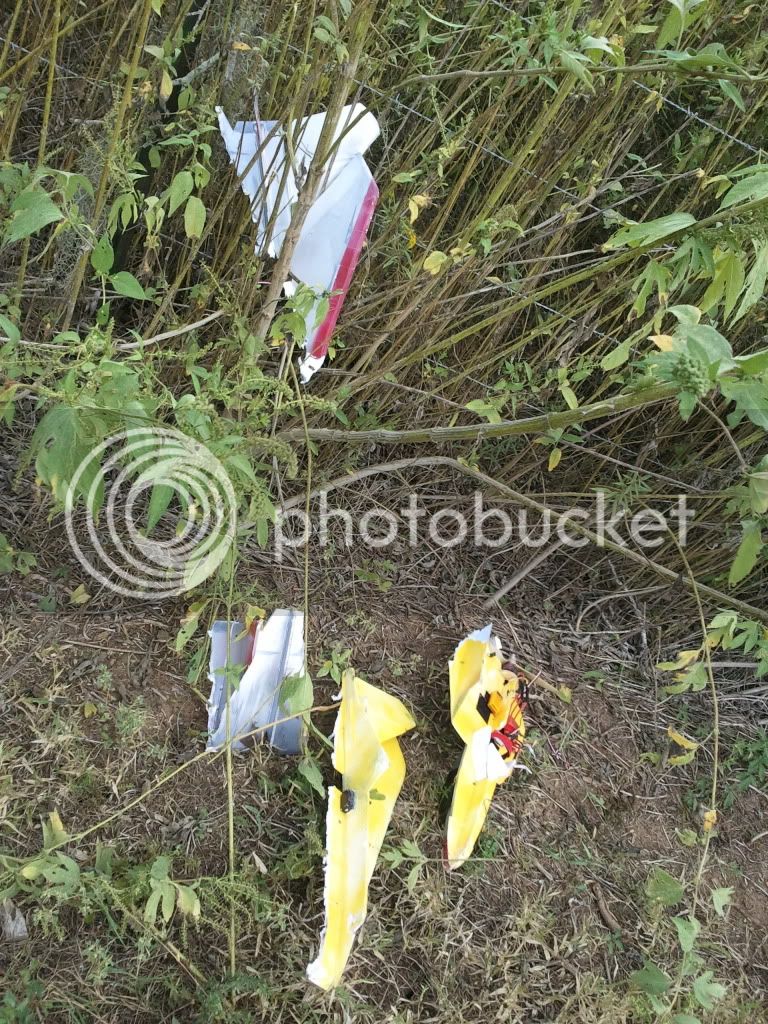 This 120+mph Parkzone gunfighter hit a blackbird at about 100mph while trying to make a Doppler checked speed pass. Put a new wing on it the next day, and renamed it “The Crow Killer” She lived to crash many more times. 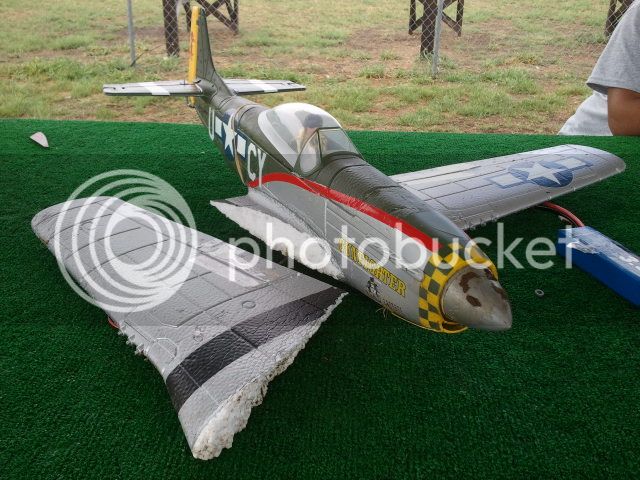 In fact she is waiting to be rebuilt after her last run in with the ground caused by the battery ejecting in a spinning dive. By the way she runs off a 3300ma 45c 4 cell.
That’s all for now

Last streamer combat session of 2013 (November) with my son, nephew, and brother. This was our best guess at recreating the mid-air impact that took out my brother and I. Bottom plane is a slightly modified FT Bloody Wonder (30" wing span). Top plane is the first prototype of my Foamie Wonder (37.5" wing span). I'm working on making a foam version of the Sig Wonder (part of the inspiration behind the Bloody Wonder) as close to the original as possible (without the actual plans). This one was a little under powered on the NTM 28-26 1200, but it flew well. It was a joy to see something I modeled actually fly!

This is the second prototype of my FB Wonder. First flight was extremely pitch sensative and I thought I was going to loose the plane because it was so unstable. I managed to bring it back in without damage. I built a new power pod with about 10° down thrust and took it back out. I'm really happy with it now. It flies really well on the NTM 28-26 1200 now. It could definately handle a bigger motor as well.

I'm making some minor tweaks for prototype number 3 which might become version 1. If anyone is interested in plans for it, let me know.
O

#13
Crashed my 2nd F22 - forgot about this thread and started one here: http://forum.flitetest.com/showthread.php?8223-FT22-2-Crash-and-burn-again

Admin
#14
Why do you put spars into the wing?

Repaired and flew till winter.

I retired the airframe because it was just worn out and putting rubber bands on during the winter is annoying.

#15
crash tested
on the leading edge just pull off the covering to get to bare wood. cut good wood to about a 45 degree angle. cut new piece to match and glue in and sand then recover.
on the fuselage you probably have cracked it and need to find out where then just peel back covering and reglue.
C

#16
Thanks Ron B! I'll give it a shot. Anybody know what the plane is? I picked it up CHEAP at an estate sale, put in a motor, esc in it and went flying.

#17
Trying to fly between and under some trees with the FT spitfire. There was one sneaky branch hiding in the sun
Srry for the really bad video quality

#18
And here's another one the ultra short life of my first FPV FT-spitfire.
Crashed it whilst putting on the fatshark goggles

#19
This thread's title is exactly in proportion to how my stuff usually goes...
My first couple flights were on the FT Flyer, but it was really pitchy (realize now it was tail-heavy), crashed about 4x, breaking a prop each time. I only had so many props, so I figure I'd keep crashing, but if I was pushing, at least I wouldn't be breaking props. Thus...

This thing!
I don't have any completed build/flight/crash photos, but it did fly better than my tail-heavy Flyer. That front section is the battery tray, which had a nose/cover that attached over it. That whole thing tore off after an especially hard cartwheel.

I also had trouble moving the CG far enough forward, with the somewhat limited distance for the battery/ECS leads, and the motor was really far to the rear, so started with a more conventional wing-shape.

It came out a little smaller than I intended. Wingspan will be 31.5 inch, 9" root and tip chord, and about 17 degree sweep (5"). The 4" on either end are undercambered in the FT Spitfire style.

I really like twin boom design, but there's some issues with rigidity of DTFB. In my previous design, I used an L-shaped section to increase the moment of inertia (bending resistance), but the one-piece twin-boom/twin-rudder/elevator was annoying to cut and fit. I was playing around with the idea of making a DTFB square-tube, and then figured I could get about the same strength with a Triangular-tube. I made a 1.25"x1.25"right angle, leaving 45 deg angle. Instead of connecting the booms, I figure I could run a V-Tail, one half on each triangular section as part of the tube.

I added a 3" slot and tab for alignment of the booms. The tab is part of the triangular-tube section, by leaving a section out of the groove cut for the 90 deg turn.

Still needs another tail section, main spar, and some sort of body... Still not sure how many control surfaces to run... or which ones. But it's been fun so far! Any thoughts/suggestions?
Then on to crashing!
C