Mentor
#61
She flies! Very well in fact! Impressed several folks at the flying field today - very well behaved little airframe, flies straight and true with hands off sticks with only a touch of trim. Had a ball doing hammer head turns and immelmans on later flights. Ran 5 batteries through it today and just love it! The only thing I'm going to try and tweak is moving the aileron control rod out a notch on the servo horn to try and give it just a little more roll rate for next time.

Thanks for a great translation of a classic design!

#62
Thinking of building this. Due to the size wing which is similar to the bloody Baron I was wondering if you would consider this very twitchy and responsive from the ailerons? I had to reduce the throws quite a bit on the Baron.

#64
It isn't twitchy at all. An excellent flyer that does very well in the wind despite its size and weight.

#65
Thanks rockyboy and Allenhat, printed and added to the build pile.

#66
I was looking for a plane for "Squadron" usage and so I built 5 of this model. Each a different colour combination and this morning I maidened my plane.

The aircraft flies very well and can taken off, (from ground with a bent wire undercarriage), is its own length and climbs positively with little control input required. A GREAT little flier.

Hopefully I will post a pic in the future of the Squadron fly by!

#67
I flew mine with a wire undercarriage as well.

It is so much fun to fly. I regret not building a second one to replace my original that the wing warped on over winter.

This post and airplane is what got me back into rc after a 15 year break.

#68
We had 2 of my squadron test fly this morning as well as a derivative of the original post here.

Sadly no flight pics yet but below are a few pics taken after this mornings flight of my version and the derivative.

All have been test flown though the Bipe is in development and does require a little more Aileron authority!
D

#69
I still have mine that I built last year, it's my go to for night flying at the local park. Plenty sporty with 2204 motor.

#71
4 of the 5 have successfully maidened to date. 5th pilot has been a little slack in outfitting his plane perhaps next weekend we can get around to planning squadron activities.

#72
Saw the fifth one maiden today. with 4 members of the squadron present we had our first squadron take off. There was almost a midair within the first 2 seconds but we all got off safely in the end. Only one incident where I was trying to avoid one plane and flew into another, our squadrons first midair! His prop hit my landing gear and knocked his prop off. He was using a propsaver. No other damage.

It was fun seeing 4 children, (aged 40 to 70), giggling and laughing like they haven't done in years. Plans have been made to fit tail streamers for future actions. Result of the squadron outing:- Requests for 3 more from visiting members of an other club.

Please note: None of the aircraft was purchased and those requested are also not to be paid for as I make them out of foam off-cuts from the local Art shop. I supply only the Bare fuselage and wing and they fit their own electronics and undercarriage.

A fantastic design and thank you to the designer!

#73
Is there an easy way to cut the scallops in the wing and Horizontal stab?
D

#74
#11 Hobby Blade seems to be plenty nimble to make the scallop cuts.

My versions all had no scallops on the TEs and they really fly well, fast and maneuverable.

#77
Thanks for your input. I think i will just cut it straight this time. Maybe get fancy with a second wing.

#78
Made a cowl to cover the squarish nose, actually made 2 of them, (one red and one blue, to match a couple of the planes I built for squadron fun.

I used an aluminium can and cut a hole in the base, cut slits from the hole to the base ring at 4mm intervals and folded the material inwards as far as they would go so that the base of the can, the base ring, was the edge of the hole.
Then the can was trimmed down using a pair of scissors for the length required 3 to 5 cm. When trimmed I painted the cowl in the required colour. When the paint was dry the cowl was just gently eased over the front of the fuselage and slide down the fuselage until I had the correct clearance for the prop or spinner. So far the cowls do not require screws or similar and they weigh very little.

So far the squadron count has increased to 7 with 2 more on order and another being built independently. Will post pics when available.

#79
Reworked the nose to except a modified power pod and provide an adjustable battery storage location, similar to The Tiny Trainer. Its only in Sketchup now but looks like it will fit. 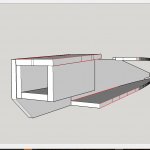 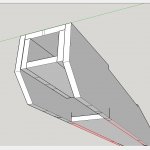 #80
What changes did you make in tail size or fuselage length? Without some variation you are adding weight to the nose and that could adversely effect the planes almost perfect balance straight from the work bench.
You must log in or register to reply here.
Share: Facebook Twitter Google+ Reddit Pinterest Tumblr WhatsApp Email Link
Menu
Log in
Register