I'm doing a project where we need to design an rc airplane. Now we have some trouble figuring out how much control surface we will need. At first we also needed to build the plane and our plan was to make a estimated guess and then test it out before the competition day and make changes where needed. (it is a competition of which group can built the plane that can lift the most weight) But because of Covid19 our university decided to replace the building by us delivering set parameters to our coach who will moddel it into a flight sim. So now we can't test beforehand if our control surface will be enough. Do you guys have anny tips?

#2
Bigger surfaces are always better. A big surface with less deflection will work better than a smaller one with more movement.

#3
FDS said:
Bigger surfaces are always better. A big surface with less deflection will work better than a smaller one with more movement.
Click to expand...
agreed and it will also improve the wing loading which is your ultimate goal
N

#4
FDS said:
Bigger surfaces are always better. A big surface with less deflection will work better than a smaller one with more movement.
Click to expand...
true, and if the aircraft becomes to sensetive you can still lower the sensitivity on your controls

Large control surfaces, moved aggressively at slow speed, can cause a stall of the control surface or the wing, (in the case of ailerons), this can also cause a control reversal effect as well as unwanted yaw effects. On a heavily loaded plane, large control deflections should be used with caution at very low speeds.

For large control surfaces in FB I use a balanced control surface approach where the hinge line in at around 50% of the Stabiliser cord with a balanced tip design. I try to avoid large cord ailerons but I definitely use the balanced tip approach. With ailerons a full span aileron or a combination of Ailerons and flaperons for the full wing span is more effective than "Barn door" ailerons.

Finally do not forget that control surfaces that are "Blown" by motor thrust / propwash are far more effective at take off when the actual airspeed can be too low to give fully effective flight controls.

Just what works for me!

#6
Here are some guidelines and a FT article that may help.
https://www.flitetest.com/articles/easy-aircraft-design 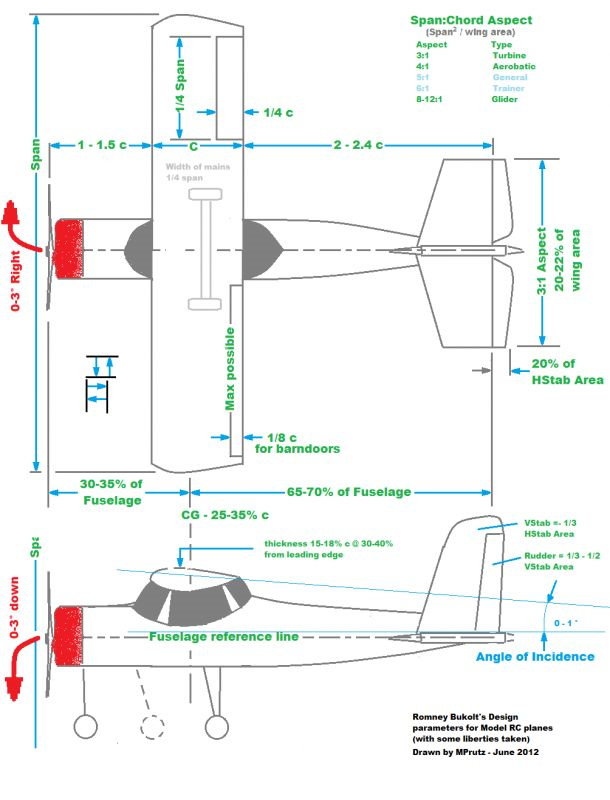 #7
Figured I'd throw this in for comparison. This is taken from Basics of R/C Model Aircraft Design by Andy Lennon.
The book is a very by the numbers math-based approach to airplane design.
If you have questions about what anything means I'd be happy to clarify.