#41
buzzbomb said:
Been busy. Got this done.

d8veh - Granted I'm still a newb who hasn't flown. I like having the cut edge of the cardstock to lean on. This part was cut out just by taping on the cut cardstock plan, and it worked great. I was overthinking. Thanks, man. Seriously. Just taping it works if you think the placement through. Thank you.
Click to expand...
Scotch Magic Tape works best because you can un-peal it, which means that you can also stick it to bits of the foam that will become your components, then peal it off afterwards. Here's how I do it. I print on A4, then cut around all the components leaving around 1 cm outside them. I take the bits that make up one component, lay them on the foam-board and line up the long edges with a straight-edge (rule). Next, I tape them in place using the magic tape using longish lengths overlapping the edges. I cut out any holes first and then cut a series of shallow slots at the end of the lines where there's a hinge or line that's not to be cut right through. Next, cut around the outside to free the component, leaving the longest line until last if there is one, which helps hold everything in place until the component is free. Finally, using a rule along the slots I marked, I cut the lines that aren't cut right through. I guess you could cut those lines completely before cutting around the outside, but I worry that I won't get so much precision on the depth when cutting through the A4 paper at the same time. I might try it next time to see if it's a problem or not.

When long components stretch over several sheets of A4, I normally do a check on the overall length to make sure it matches components that need to match.

#42
I lost some momentum when I realized how long it might be before I can fly. I have not given up. 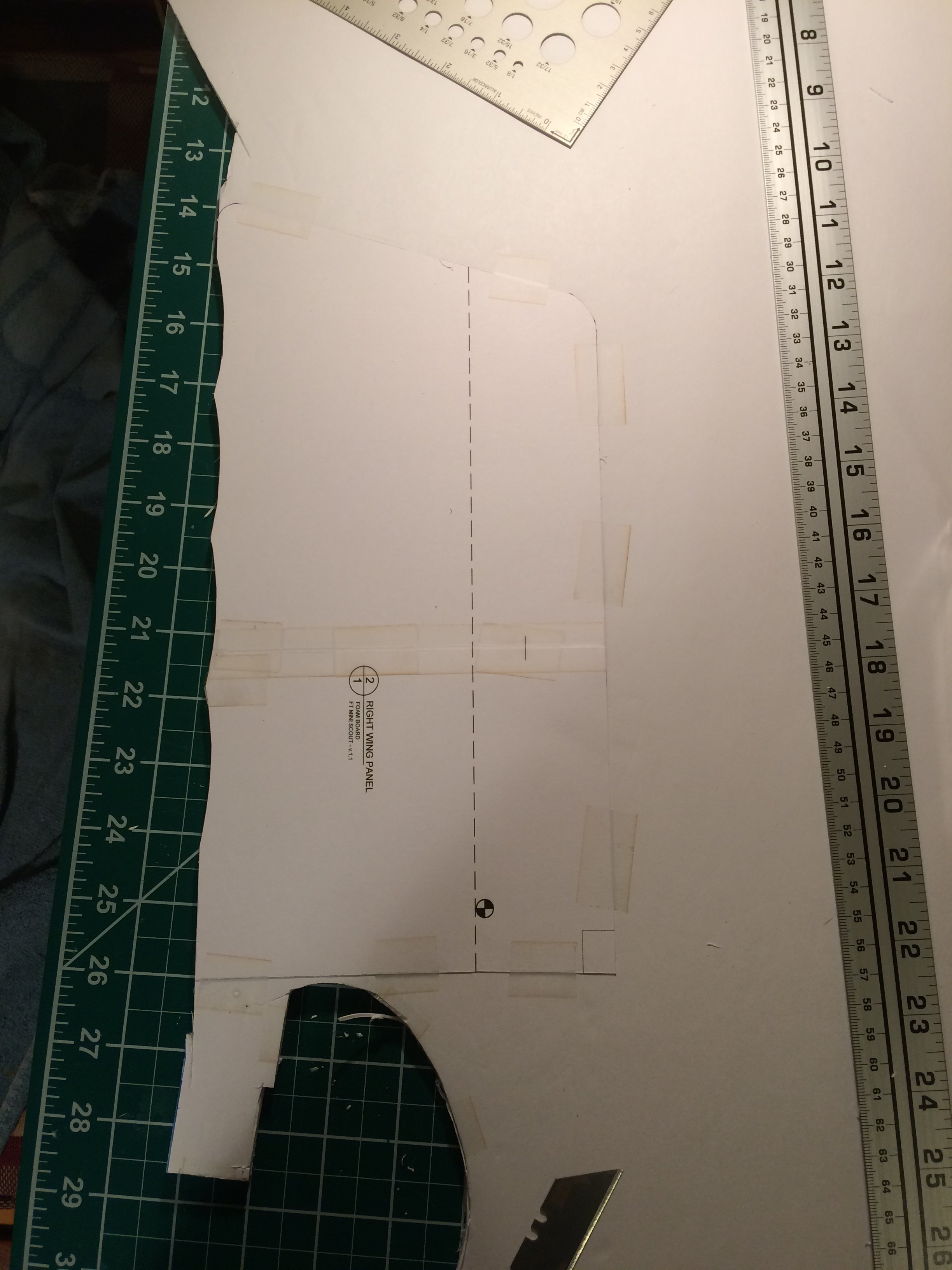 :
Completed wing section with CG mark and the weird little cutout that will come into play later in the build. It's not pictured but I did the other side of the wing as well: 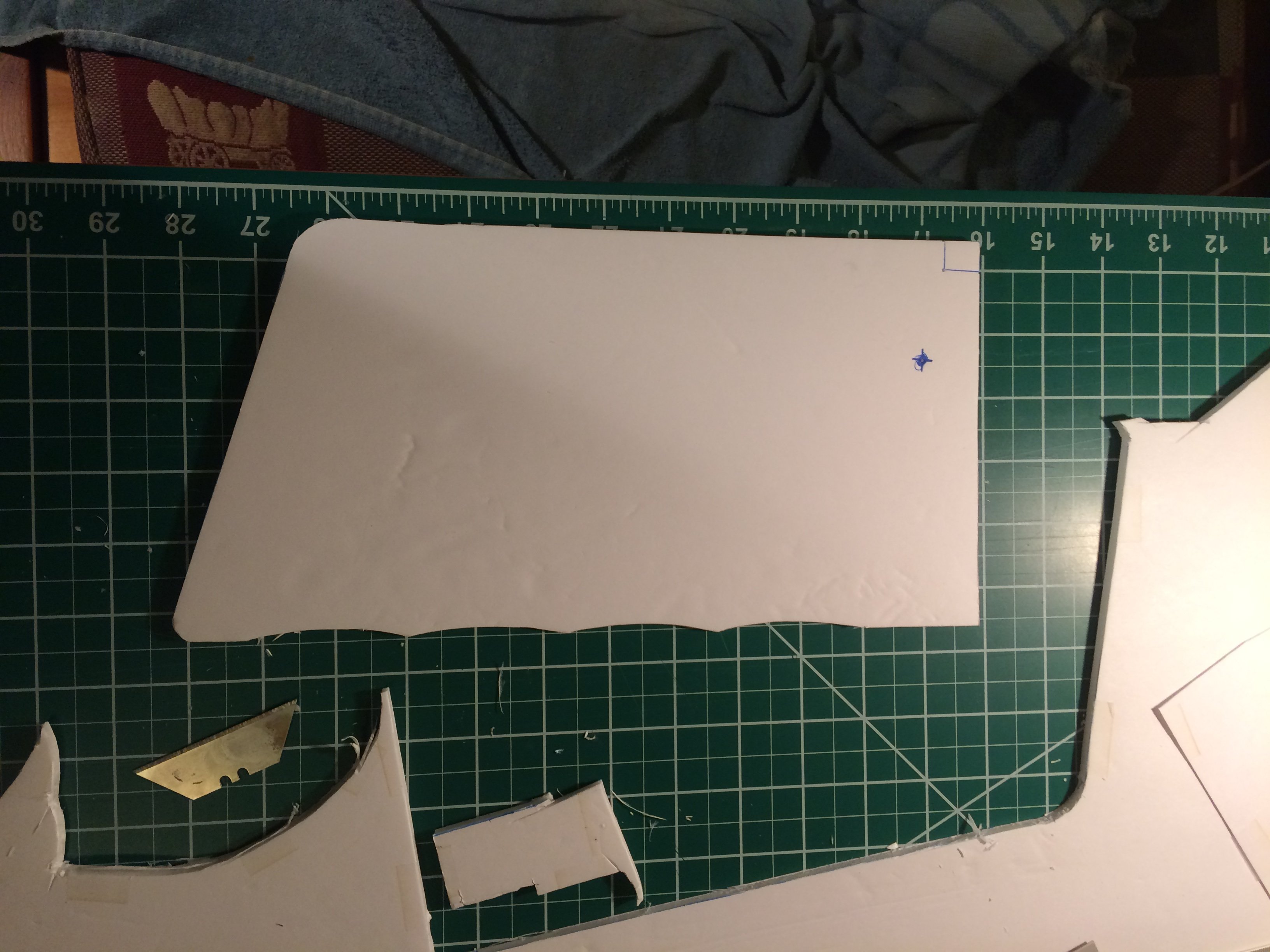 Laying out the camber gauge try one: 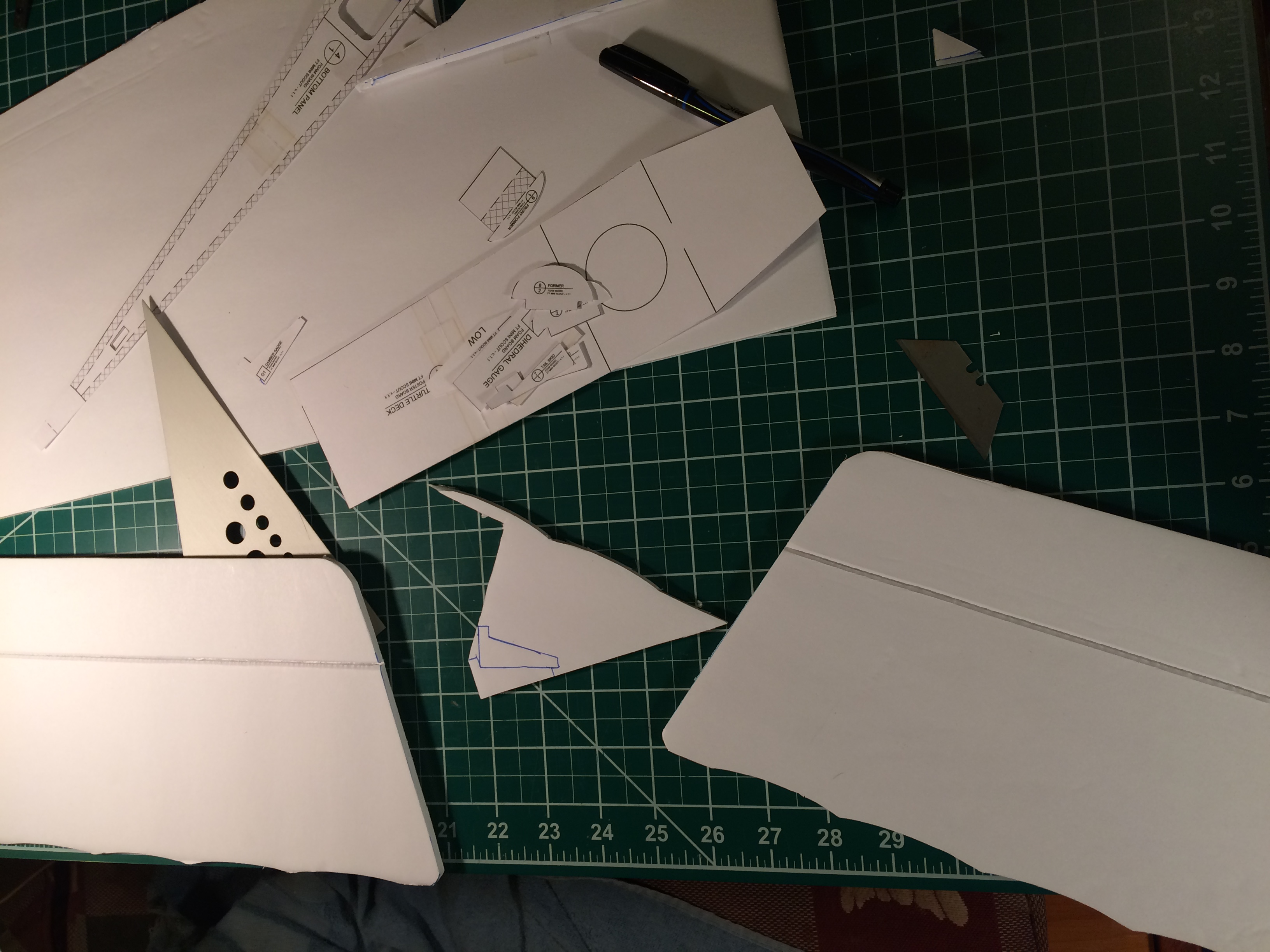 Then I saw the light. This is try two. You can see there's a bit of adjusting to be done. So long as everything is squared, the only angle that matters is the camber. Sweet! 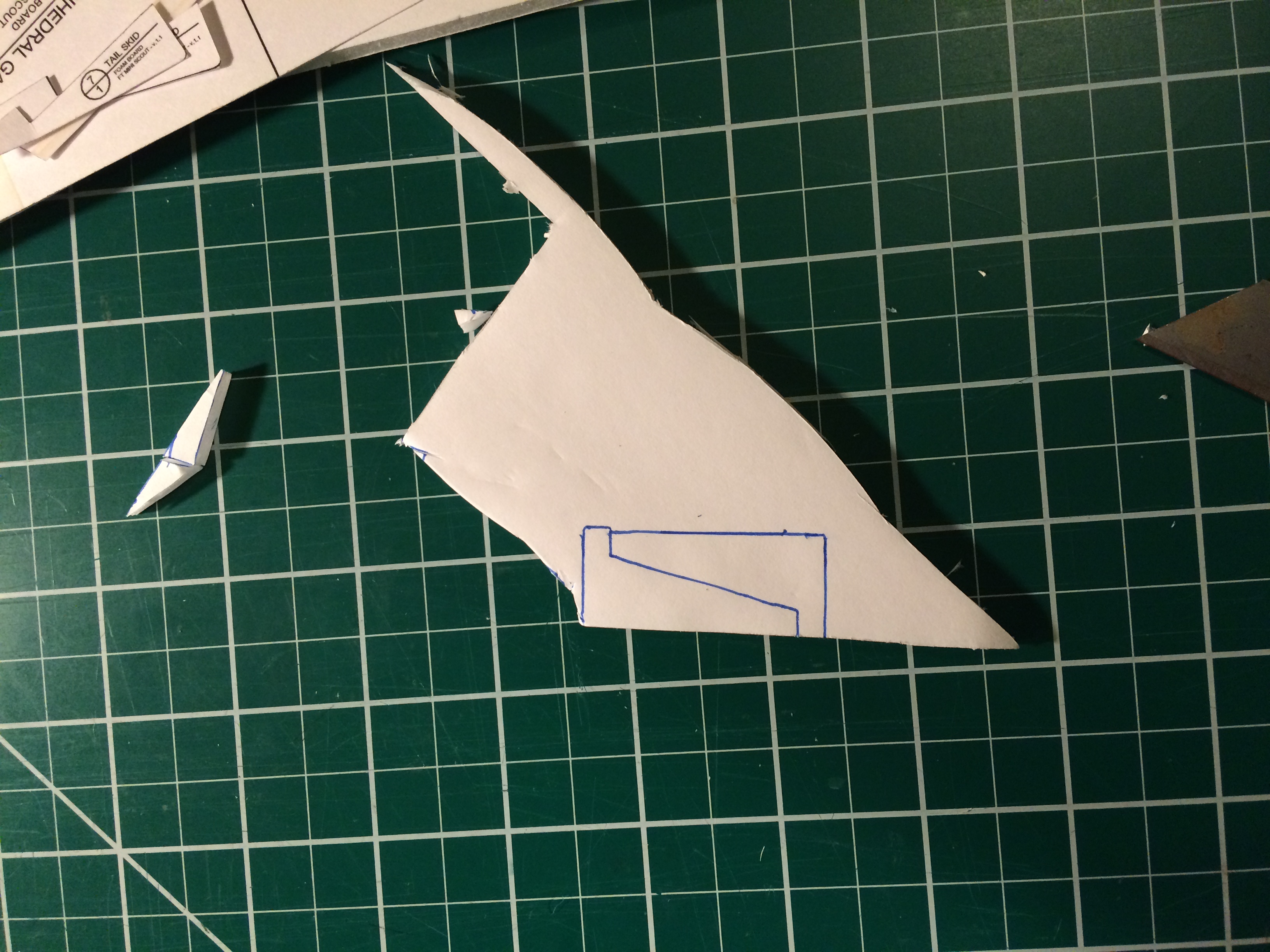 #43
Aand here it is. Two seperate pieces of camber gauge all up in the middle of my new fuselage build. 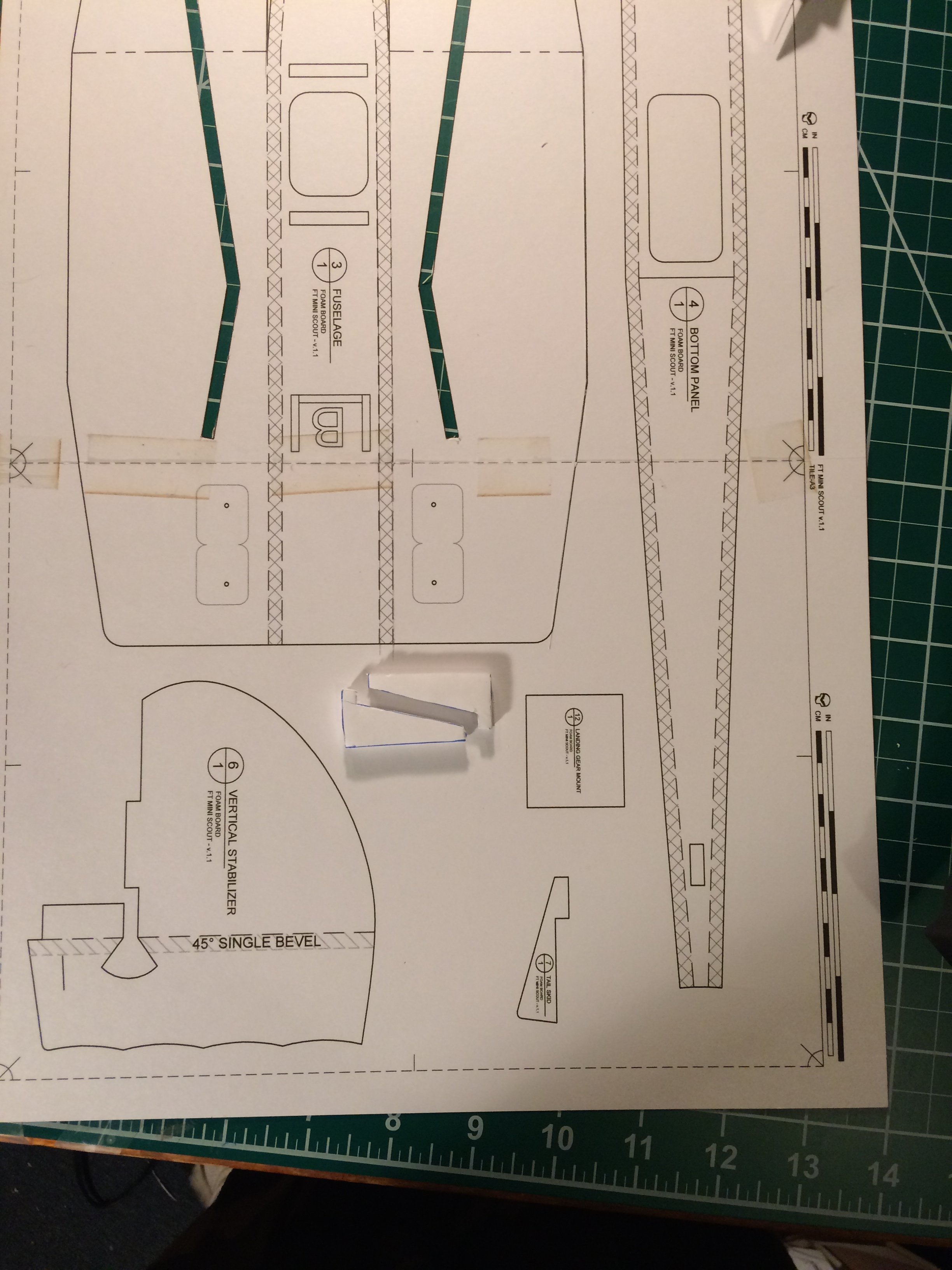 #44
Thanks for continuing I’m following right behind you. I have the fusalage and rudder done.

#45
I was going back to the fuse, when I realized I hadn't finished the wings yet. Here is laying out the dihedral gauge on the previous, screwed fuse. I tried to just hold down the first one and I wasn't happy with it. So I pinned it down. Seems like a combination of pinning and taping works for me. Once again can't put text below picture. I don't know what's up. Next pic, next post I guess. 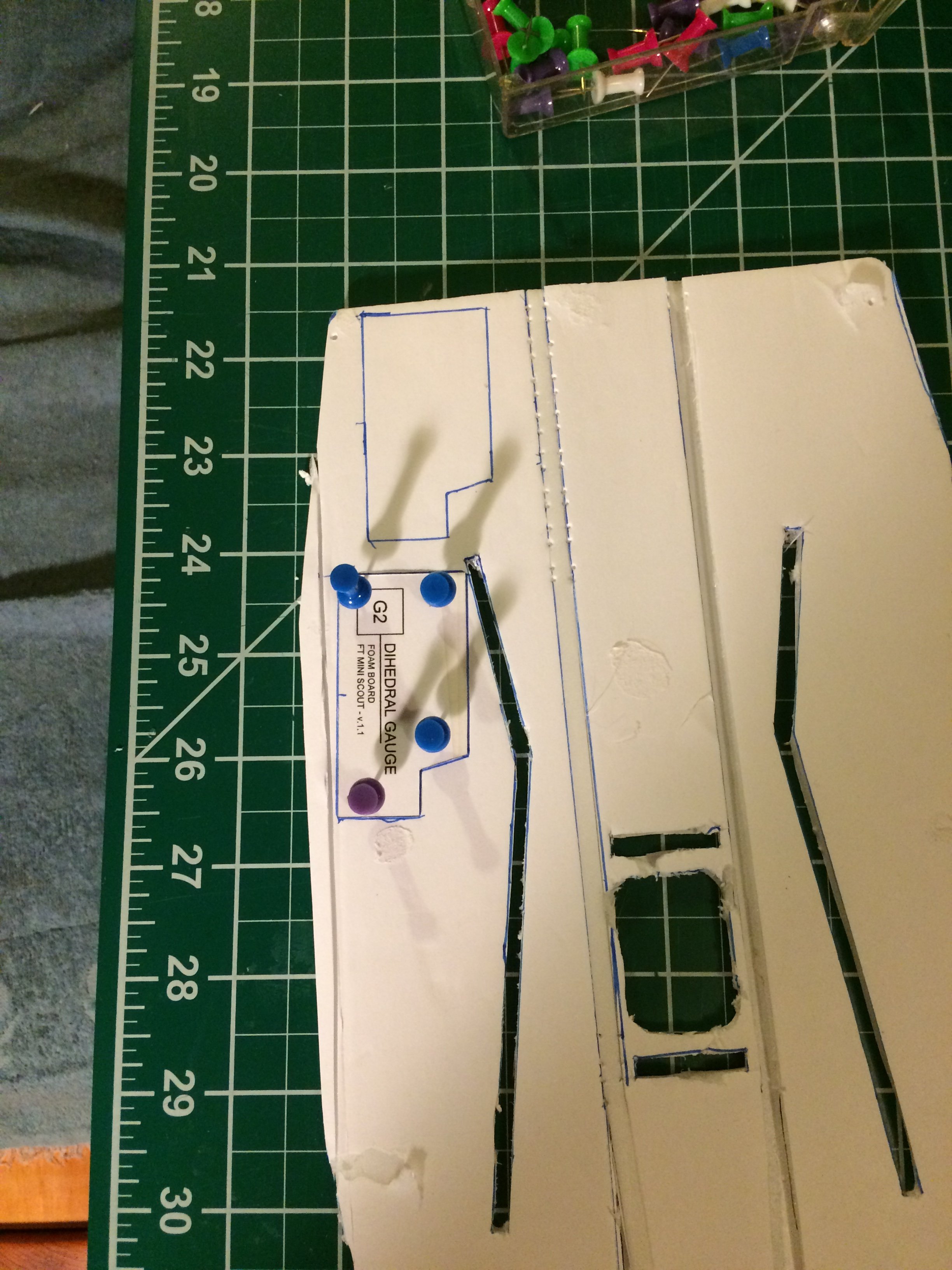 #46
Here is the wing with camber and dihydral. It bothers me on a personal level that it doesn't balance perfectly. I recognize that it doesn't really matter, since I'll be strapping it to the fuse with rubber bands connected to barbecue skewers. I am learning. 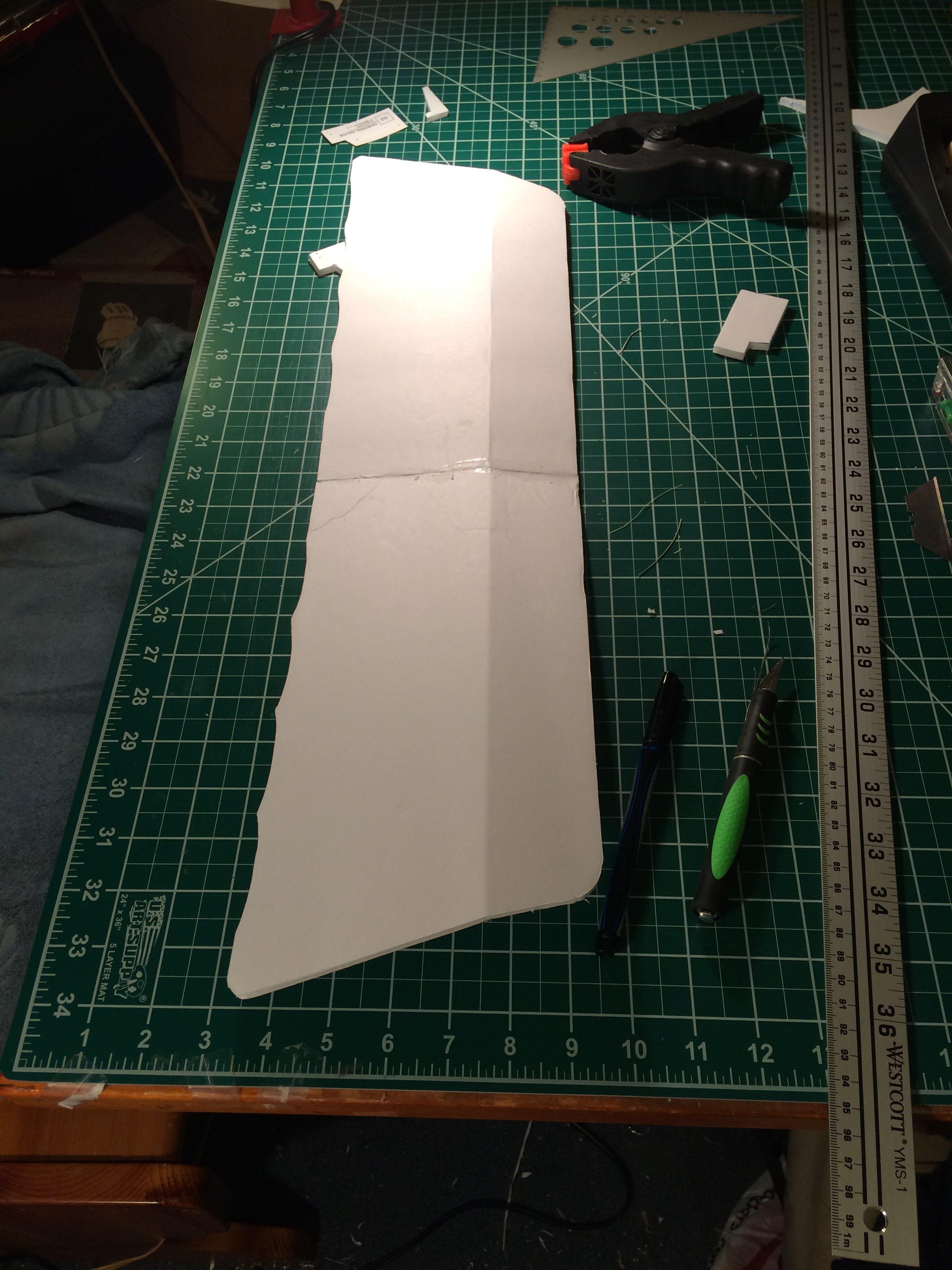 #47
OK! I put some tape on the seam and guess what? It balanced! I'm so stoked about that I don't even have words to describe. Tap it here, tap it there, it comes back to center. Come to think of it, I do have words for it: Frackin' Frickin' Awesome!! 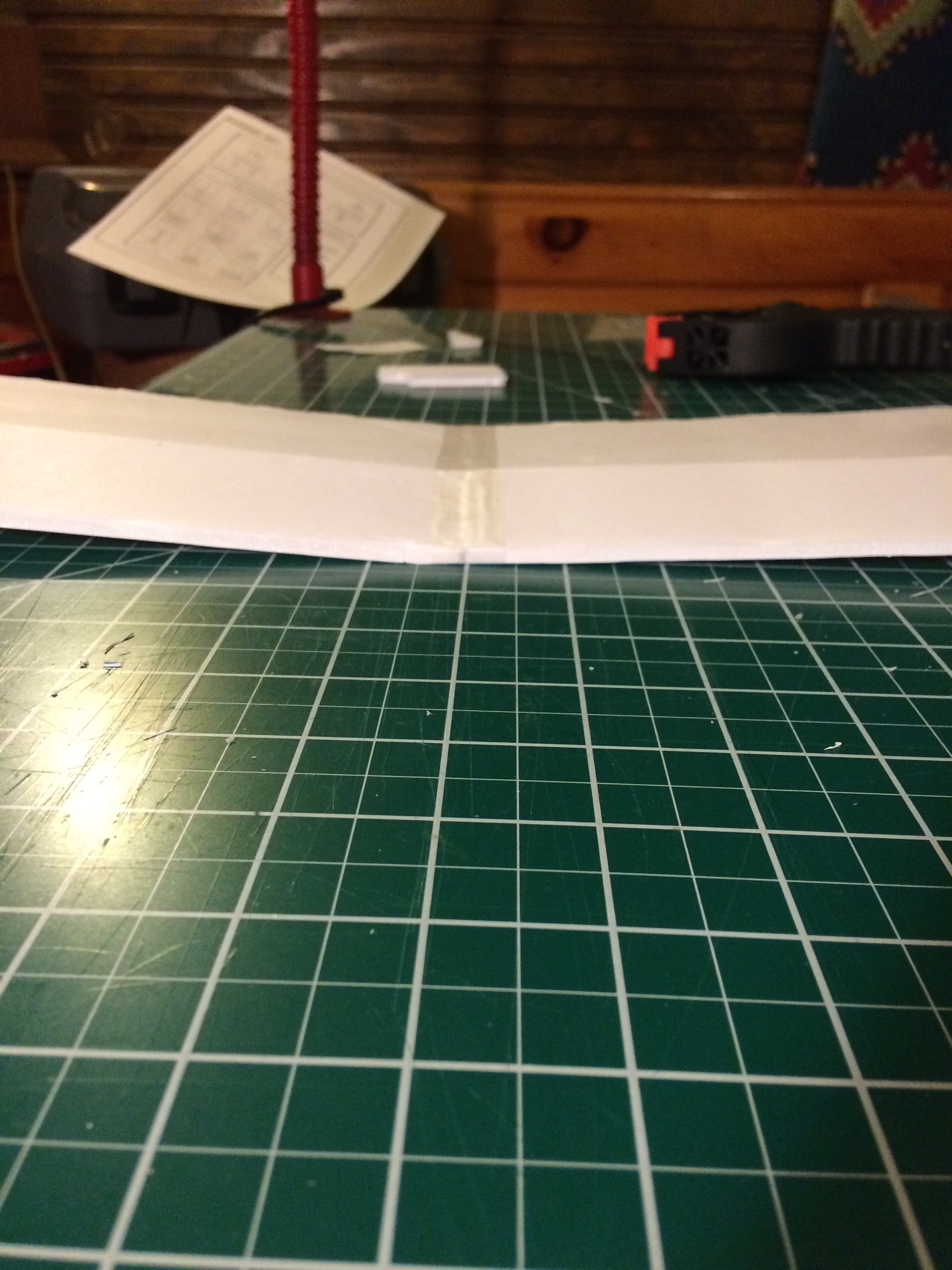 #48
I decided some time ago that I needed to get my skills up to build that fuse. After two failed tries it was apparent. So I built other parts......

Here is the fuselage. 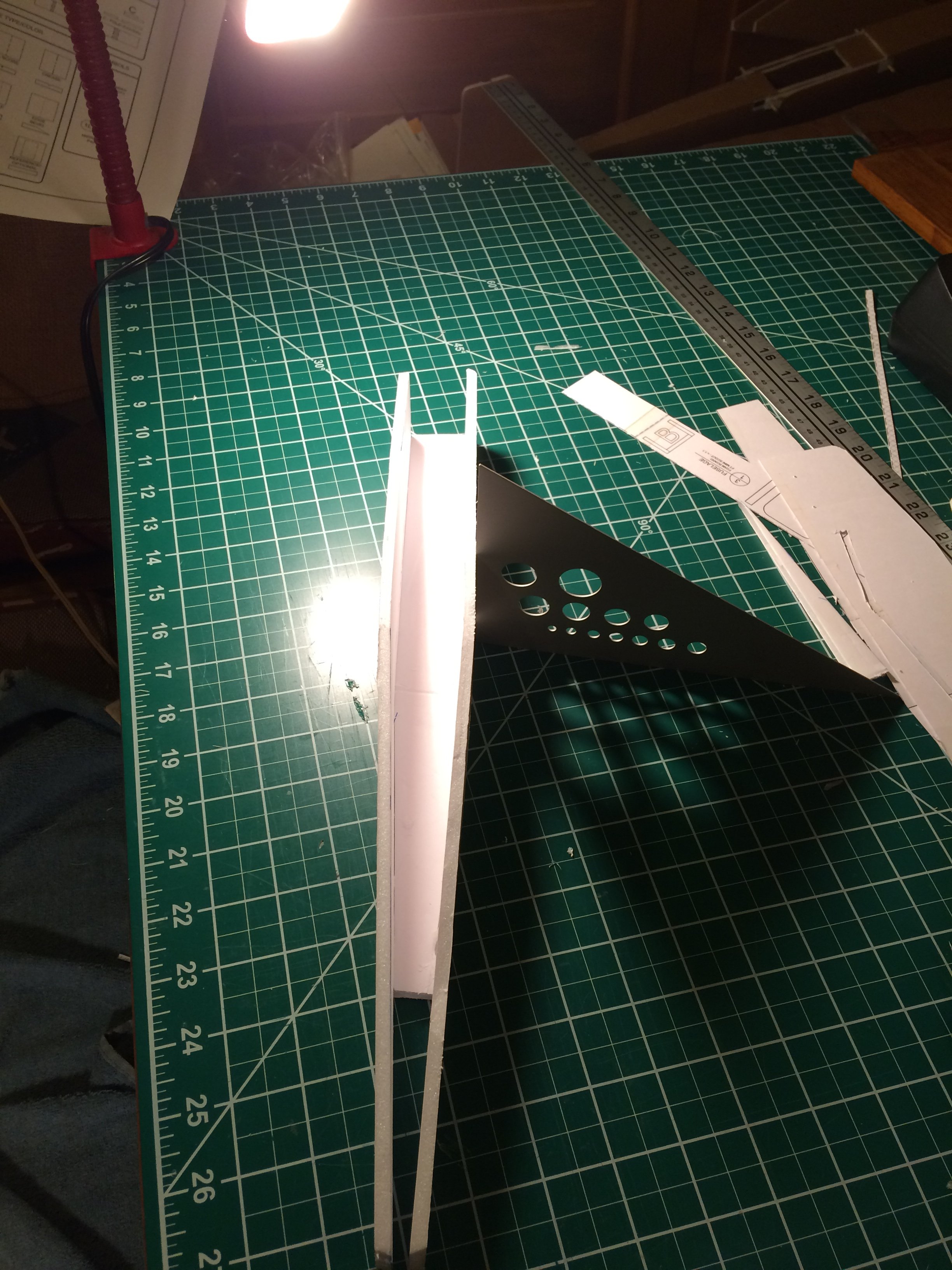 #49
Been working. Six days straight. 2p to 11p. I can't really do much other than sleep and work when it's like that. I've got nothing left when I get home. I'm a worker bee machine. All on all the time, better than 100% capacity all day long. When the shift is done, I am done.

HOWEVER I was off today. I slept a lot. Then I did this: 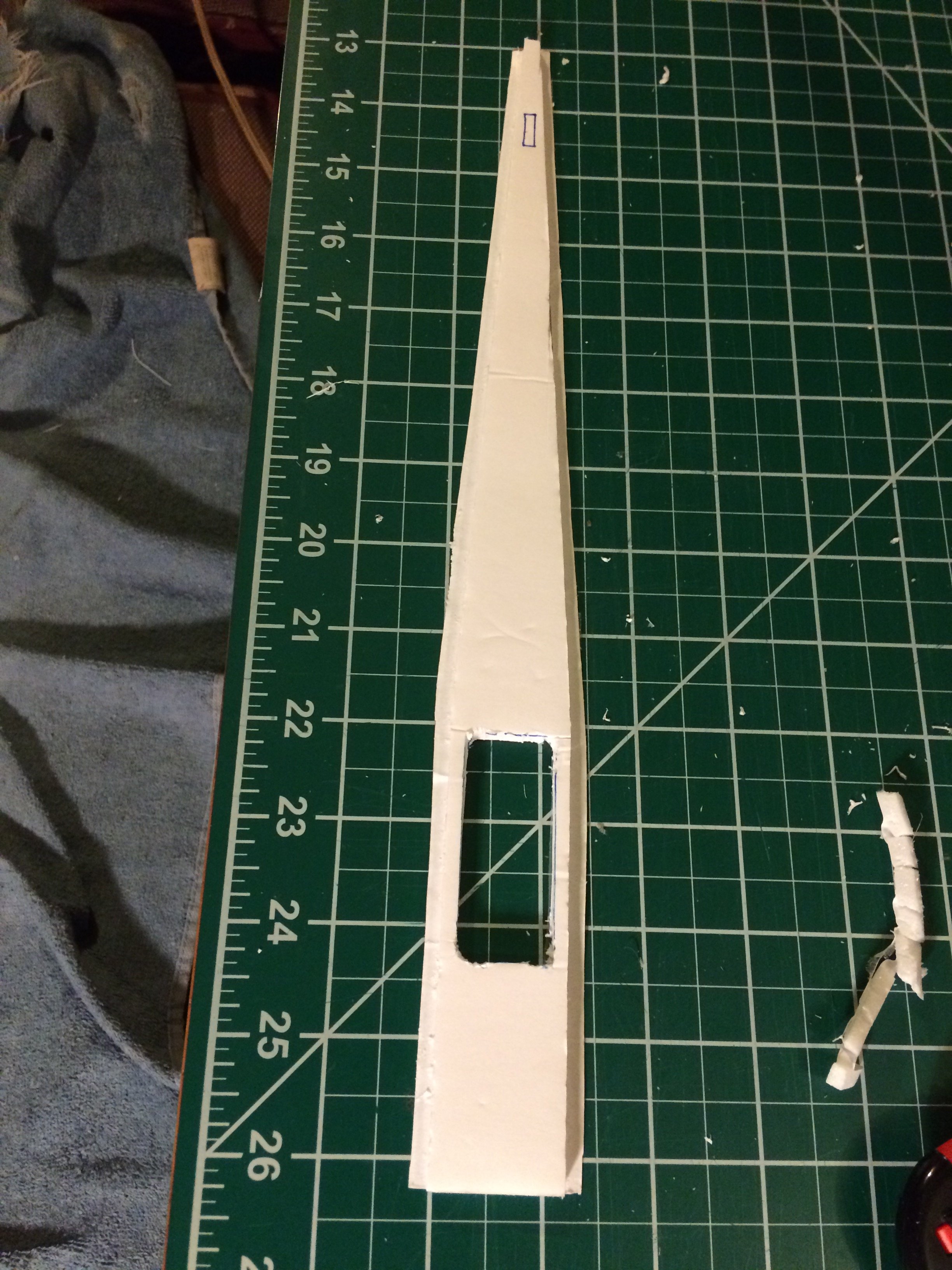 #50
It's such a simple piece, really. It was a major pain in my backside, but it is done. On to the next. 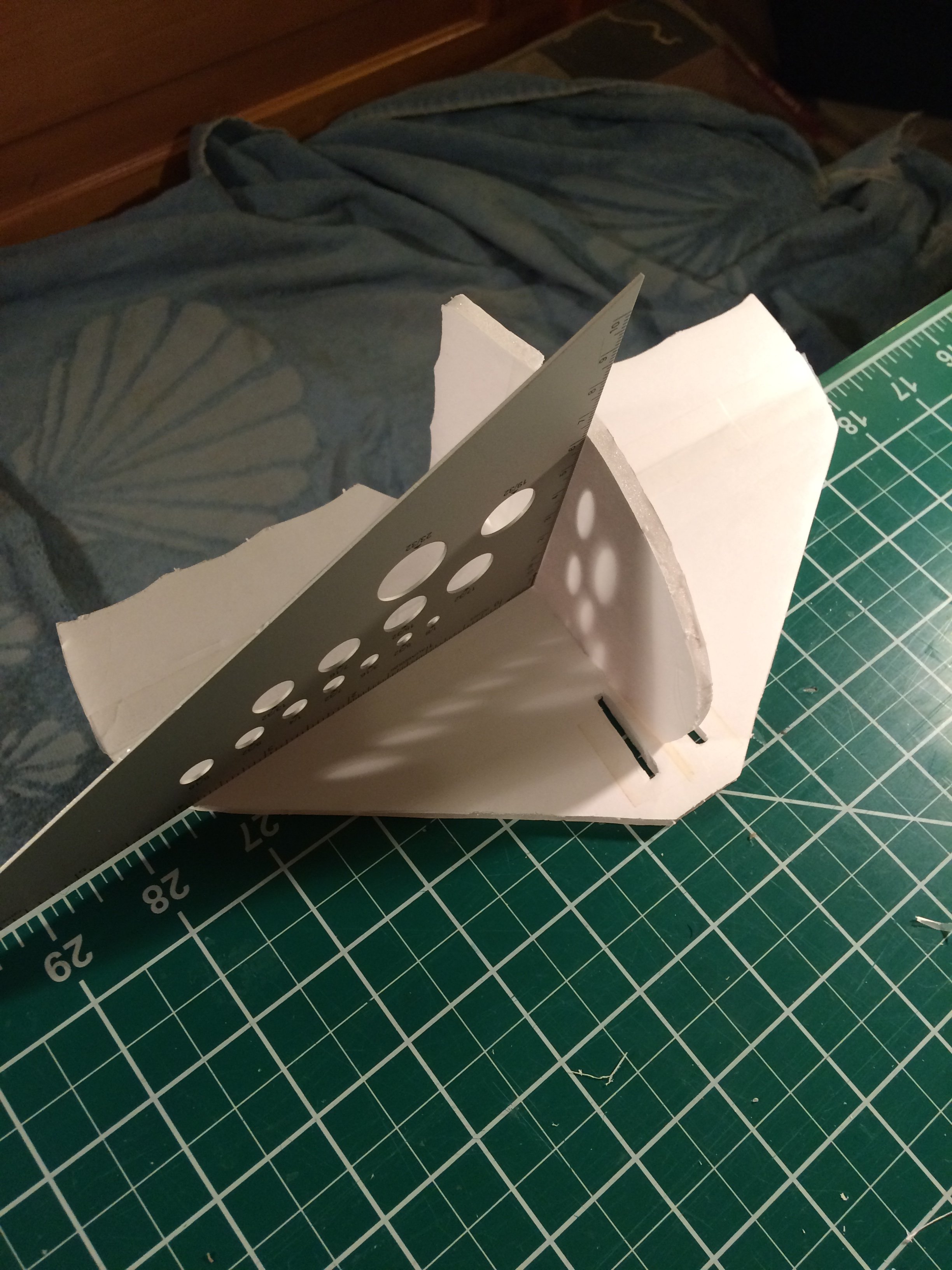 #51
Ran the glue at the seams of both the rudder and elevator and scraped it off as per the video. Ran some tape along the otherside because I cut through the paper a lot. Later, I ran some glue along the seams, as per video and here it is. All squared and glued together. Next.

#52
I put some parts together. Everything moves well. It may not look it, but the tail is squared. 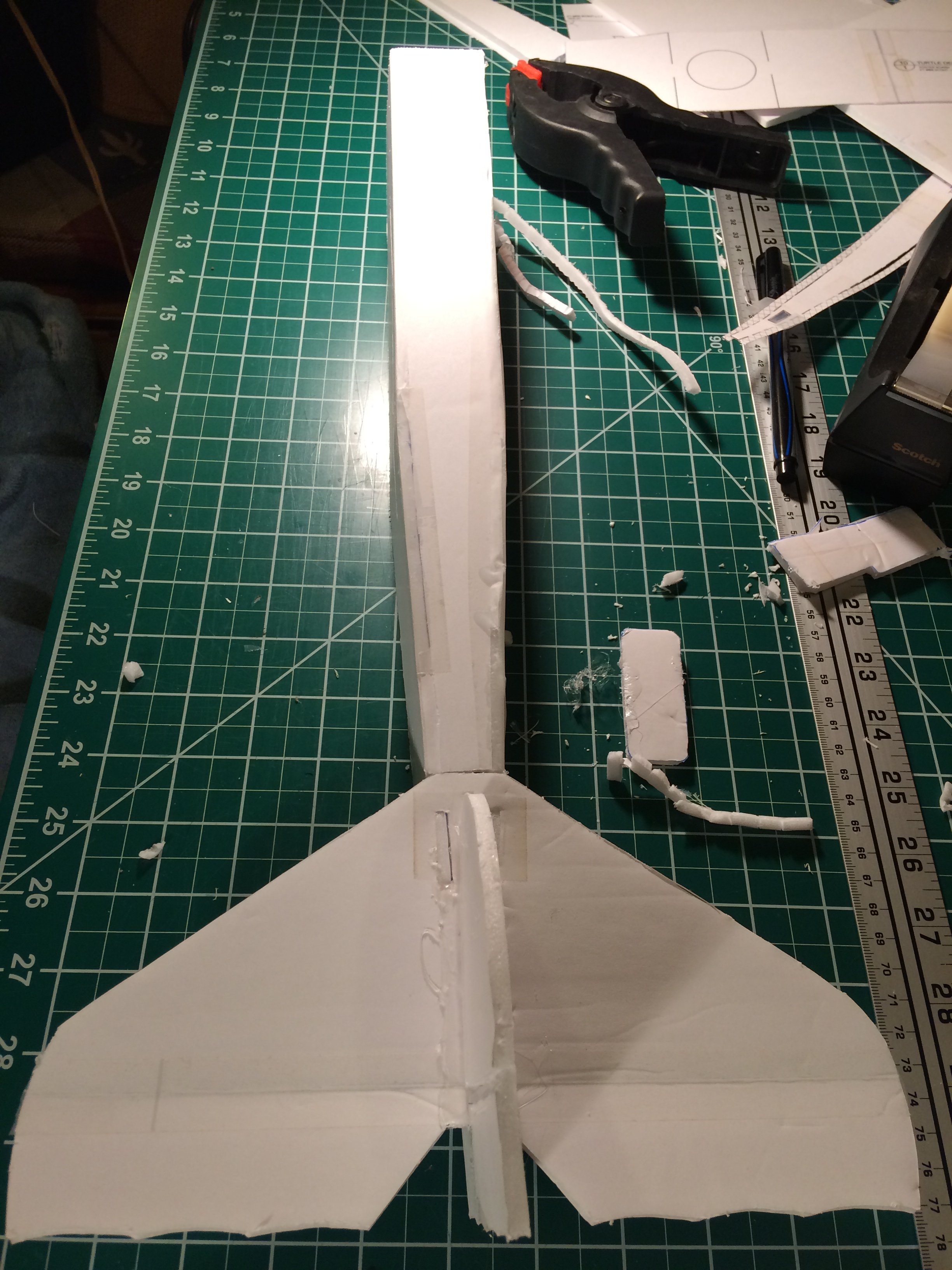 #53
The underside. Everything is ready, I think. I'm not sure what's left before I can get the electronics. Christmas. Presents to myself. Cheap-ass transmitter and receiver and the recommended power pack. Soon. Soon it will fly, as will my TT. 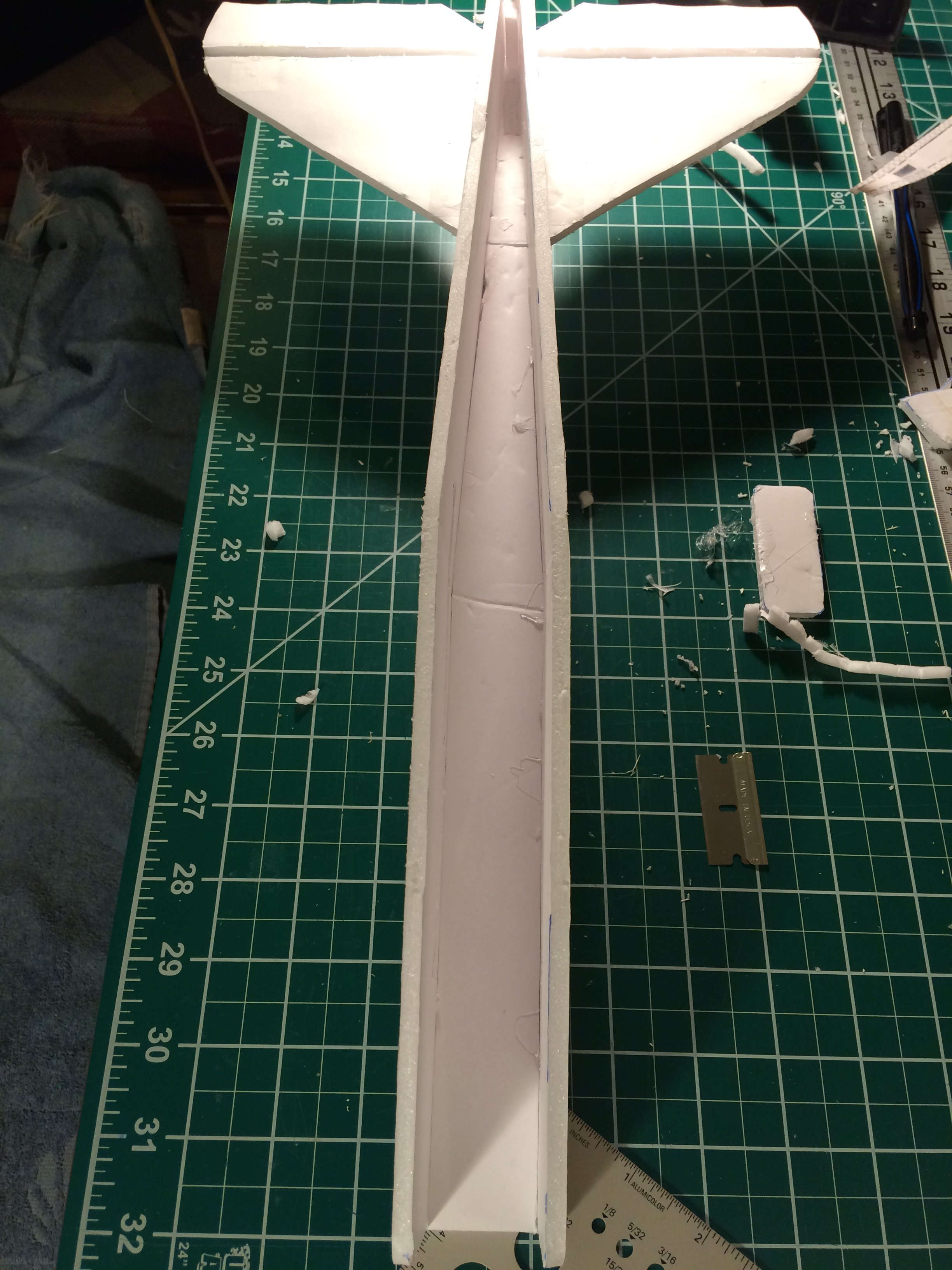 #55
Is this your first plane then? I thought I read that you had already built and flown one, or was that somebody else?

#56
In post #49 I reckon your fuselage is folded inside out... can't really tell in the following pictures.

#57
Userofmuchtape&glue said:
In post #49 I reckon your fuselage is folded inside out... can't really tell in the following pictures.
Click to expand...
#49 is just the bottom, I guess you'd call it a joiner? It fits, and I'll cut out the little rectangle beforehand. Good catch, though. It's not being glued in yet. I've got to get further into the video. I don't have any servos, so I've got to stop when they go in.

#59
Ah no worries then. I've never built a scout so I wouldn't know.

#60
buzzbomb said:
Nope, second build. No flights. This one is nearly complete without servos and such. I've got foamboard and glue, I'm looking to see what the next build is.
Click to expand...
Just a suggestion to save you distress when trying to balance at the end of the build.

Do a fit up, (no glue), of everything and check the balance. This is just in case you need to alter the design to get it to balance. The easiest method is to mount the servos further aft if the plane is nose heavy or further forward if the plane is tail heavy.

as for the mounting of the servos they do not need to be buried inside the fuselage as they can be difficult to access or replace if needed. once the balance is determined they can be cut through the fuselage sides and the pushrods run externally. This is what I recommend for those starting out as the salvaging of parts for the replacement build is much simpler. Also once you learn to fly properly then you can do a Aesthetic build and bury those ugly servos!