#1
What I knew from the Start
​
I have realized with my journey through this Hobby over the last few years, That If I was going to truly engage my 2 sons in this Hobby with me, I would need to find a way to reduce the risk of accidents as they learned. My oldest has a tendency like most pre-teens to assume he is amazing at whatever he touches. But is crestfallen when it is apparent that assumption in-accurate.

Up until now they have been drug to the Flying Club, or the local Middle School yard where I attempt to fly, maiden, and often crash my planes. They have been there with me through most of it. The witnessed the Delight and High of Design and Maiden Successes! and the utter defeat and occasional unhinging of their dad as he wonders What he keeps tackling this hobby for.

The lead up to this project is no Different than any other mission. Great idea, High hopes, reality slaps my in the face, and regroup after nearly throwing in the towel. Success worked it's way through in the end.


The Plane of Choice - FT Spitfire​
I had built flow and maiden the FT Spitfire from a speed build Kit., and was impressed at the flight envelope. it's control, and yet it's gentle forgiving tendencies, but still enabling a pilot to get into trouble. I did all this using my trusty Radiolink TX and Rx. Knowing the Buddy box was tested with my Girlfriend over the summer on the Jumper T16 & Jumper T8sg Combo (They have the same Trainer port setup). Now all I had to do was put the Spitfire Setup in the T16 transmitter. not being intimate meant a lot of learning to do. After chatting briefly about what I was trying to do, I got some quick advice (@BATTLEAXE ) which saved me some aggravation and much appreciated time. To him I say, thank you sir.

The next day I painted up some orientation colors. (blue is on the bottom). I was time to test it on the new transmitter. 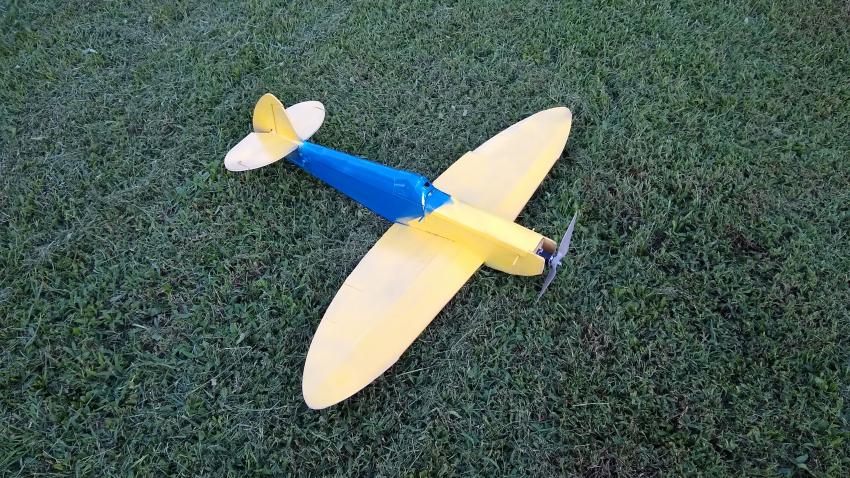 Buddy Box system​
As the maiden was flown on different TXs than my buddy box systems, it was important, that before I try and get buddy boxing so i can get it trimmed and then make a basic setup on the T8SG. In my mind it shouldn't be a big deal. Sadly it was. First bad launch cracked the firewall (while avoiding an animal). The second had a ground strike on a low recovery, which pulled the motor off! That evening, it was three Flight attempts... 2.5 failures at flight. (note the hungry propeller marks) 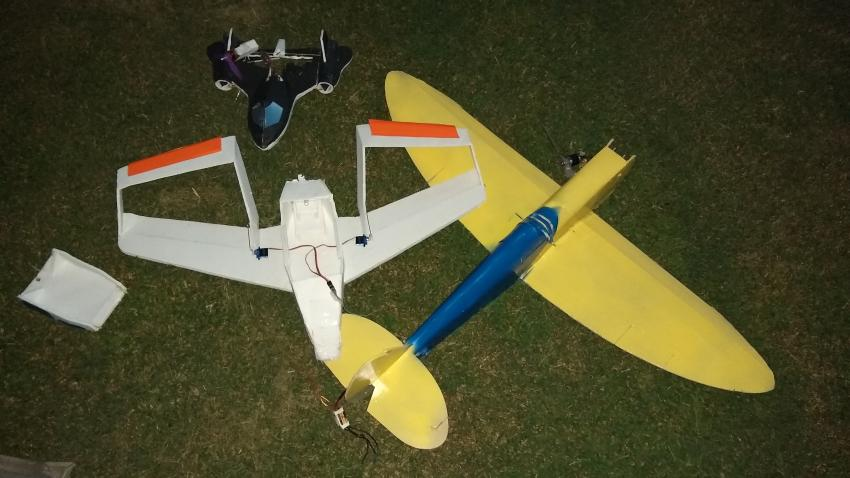 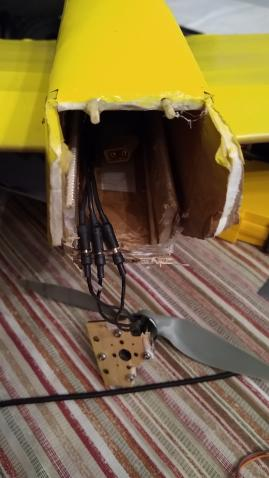 After letting my disappointment (near rage-quitting) in this turn of events subside, I realized the fix was simple. I found another fire wall, and attached it and moved the motor over. Now we are ready to try again. (hopefully the last "attempt", with only fun to follow). 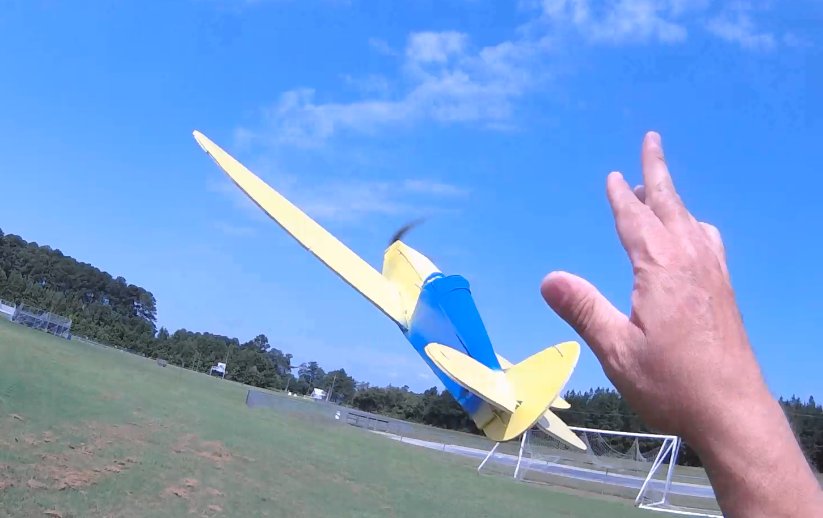 ​
The Next morning I pulled the equipment together and head to the field. it was time to test and trim. the launch was Low and iffy, but managed to gain altitude I realized after hitting the trim wall, it was time to land the plane and adjust the pushrod length. a pair of pliers I brought did the trick. a confirmation, and a few ticks on the trim tab...it was time for the main event! 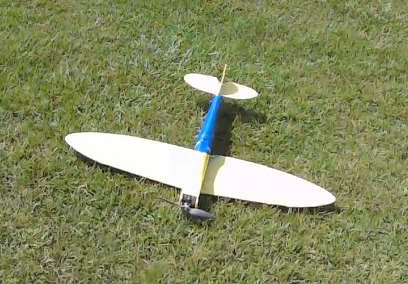 Flight Time​
My Oldest Quinn, Got all nervous. It was so Cute. I reassured him that I had him, and that I watched what he was doing in the sim. He had it.
We got airborne and I brought the plane to 3 accidents high, started her in a pattern and passed control to my buddy. The moment was upon us both.
He took it with confidence! While he flew a bit hurky-jerky he was rolling it around the sky like it had happened before. 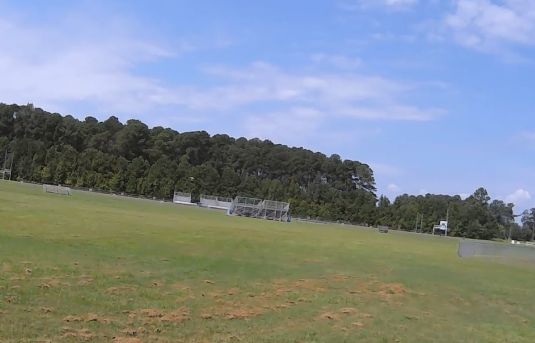 The yellow dot right above the bleachers is the plane... that's where he started to recover it, but he was scared it would crash.
​
I tried to give him an opportunity to catch it on his own. 50% successes. I was impressed. a few recoveries weren't smooth. We nearly destroyed it from me cutting the engine, instead of just going to trainer controls. The controls were setup for top of the 3-way trainer switch is motor kill, mid is Trainer, bottom is Student) But in the end... it came back in one well flown piece. the other was him losing control at the bleacher across the field, he was asking me to take it worried he would "land" it. I just barely caught it. Both of us were relieved.

I was such a proud Dad! Quinn made a few mistakes, and correct some of them on his own. He got a big hug from me, and a hive five all around. While we did this my Youngest filmed it on my phone, and my hat cam was working out too.

​
most importantly we had fun. I was proud as could be. Quinn was scared an excited. He told me he wanted to do it again, but not right away! 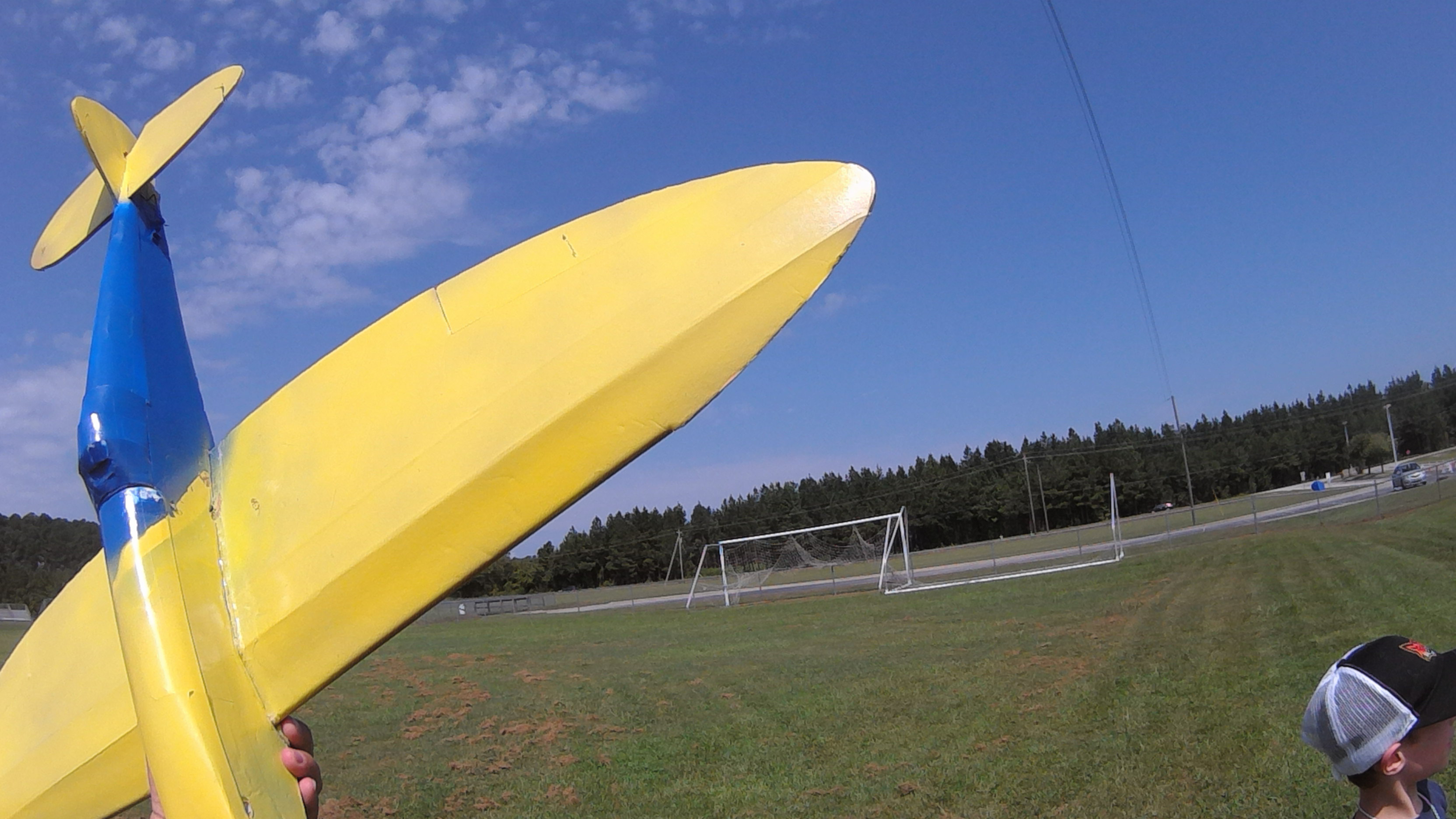 I will be editing videos and trying to release them soon on my YT channel. I will link it here when I do.

(please understand this is as much a process video as a documenting Quinn's flying!)

I plan to add some detailed information about how I setup my T16 and Jumper t8sG for the buddy system. It's easy, but there are challenging parts.
Last edited: Sep 2, 2020

#2
Way ta go Quinn!!!! show the old man how its done bud. Next time make him take you out for ice cream after to celebrate!!

Way ta go Dad for stickin with the project and pushing thru the problems. That should also teach the boys a great lessen to not just quit at the first road block.

#3
PsyBorg said:
Way ta go Quinn!!!! show the old man how its done bud. Next time make him take you out for ice cream after to celebrate!!
Click to expand...
I'll be sure he knows. We were heading to a pool party at a friends. (a better treat than ice cream)

PsyBorg said:
Way ta go Dad for stickin with the project and pushing thru the problems. That should also teach the boys a great lessen to not just quit at the first road block.
Click to expand...
Thank you. I think the lesson would be more pointed if I hadn't nearly RAGE-Quit after the second attempt with the T16 controls. I knew the spit wasn't at fault. and the fix was easy. It helped.

it seemed to work out as it should have. Daylight perfect temp, and wind, great sky, and we weren't tired from a long day (contributing factor for the loss of dignity the prior night.)

I really like the Camera I took the photos from. If I didn't need to get three to find the working one, I would by another. (so it shall remain nameless. $~20 amazon, 2-day shipping)

#4
The video is uploading now. See it posted at the end of the first post!

#5
Today I took the boys to fly the spitfire and FT-Simple Soarer. The Soarer was too Wiggly, and I couldn't get it to level flight.. so Logan Tried his for Full size on his own - buddy box experience today! He flew the Spitfire almost as well as his brother, Quinn, and they both had a Blast kicking that acrobatic bugger around the sky!