FT What Did You Do RC Today : Caution Offtopic At All Times

#4,561
Bricks said:
I know I have a problem there's roughly 80 planes sitting around here not including quads, and 99 percent are field ready, charge batteries and go.
Click to expand...
I've got somewhere around 30 airframes and maybe 40% could be flown. I have 7 that I can fuel and fly right this instant and a half-dozen more that only need minor things done to them before I'd fly them. Slowly but surely getting more of them ready to go though.

#4,565
ScratchBuildMast said:
Omg, guys, I'm moving soon and there is a huge field 1/2 a mile away, so I fly some more planes, and guess what?

#4,566
SquirrelTail said:
no
Click to expand...
but is that not the quickest way to get rid of foamies

#4,567
Matthewdupreez said:
but is that not the quickest way to get rid of foamies
Click to expand...
Burning them is... but I'm not that cruel

#4,568
SquirrelTail said:
Burning them is... but I'm not that cruel
Click to expand...
I've found that the swift smack of my dog's tail does foamys in fairy well too

#4,569
BlockerAviation said:
I've found that the swift smack of my dog's tail does foamys in fairy well too
Click to expand...
Your dog must be the size of a horse lol

#4,570
SquirrelTail said:
Your dog must be the size of a horse lol
Click to expand...
She is lol

#4,571
BlockerAviation said:
She is lol
Click to expand...
Absolutely adorable!! The nice thing about my dog walter is that he has a docked tail so his little knub of a tail could never take out a foamy hehe

#4,572
SquirrelTail said:
Absolutely adorable!! The nice thing about my dog walter is that he has a docked tail so his little knub of a tail could never take out a foamy hehe
Click to expand...
We normally don't let her in the workshop but once in awhile, I'll leave an airplane out and if her tail hits it, more than likely I'll either be warming up the hot glue gun or getting the CA out, her tail is brutal!

#4,573
our dog ruby, would think ooh toy, pick it up and drag it around the farm while thoughtfully chewing it
J

#4,574
Matthewdupreez said:
hey guys go crash some planes
Click to expand...
Uhh no. I'm just gonna get a shed, climate control it, and store planes there too.

#4,575
I'm flying FPV tomorrow! Be the fourth time this engine's run and the first time it's flown; brand new FA-40a.

#4,577
Did some taxi testing on water with my little Sea Rey. It has a tendency to hop as it starts to plane. The last run saw it catch the nose and fill with water. Minimal damage, probably won't try flying it from water again. I bet if it was bigger it would behave a little better.

Also found out that the intermittent aileron issue on my Cafe Racer Mk2 was not a receiver problem. The Y-harness had partially unplugged from the servos in a previous crash. Apparently I forgot to tape those connectors together like I usually do when something is buried in the wing with no way to see it. May rebuild eventually; for now the electronics are going into an FT Sportster.

#4,578
Getting this bird ready for its maiden. Have upped the ESC to 60A, bought some retracts and with some hacking and some 3D printed mounts I designed I swapped out the fixed undercarriage. Flying this on a 3500mAh 4S.
Things to do, get the pull-pull nosewheel steering working, glue in the exhausts and that's it!

Still waiting on the weather to fly this...

#4,579
I was gogs down before it got placed on the runway and they didn't get lifted until after the engine was off. So much fun! And that Saito sounded so damn nice whether I was listening third person or first person...

#4,580
I spent most of today fooling around with the various things I got at the tri-county swap meet the other day. Among these things were a healthy amount of engines!

The real jewel was this pretty much NIB Tower 46. It's got a bit of oil residue on it here and there, but I think this is oil that was applied for long-term storage; I took a big whiff of the exhaust port and smelled nothing. I'm pretty sure it's never been run, and I'm not going to bother running it until I have it installed in something. I paid $60 for it along with a big box of propellers. I'd consider that a pretty good deal. 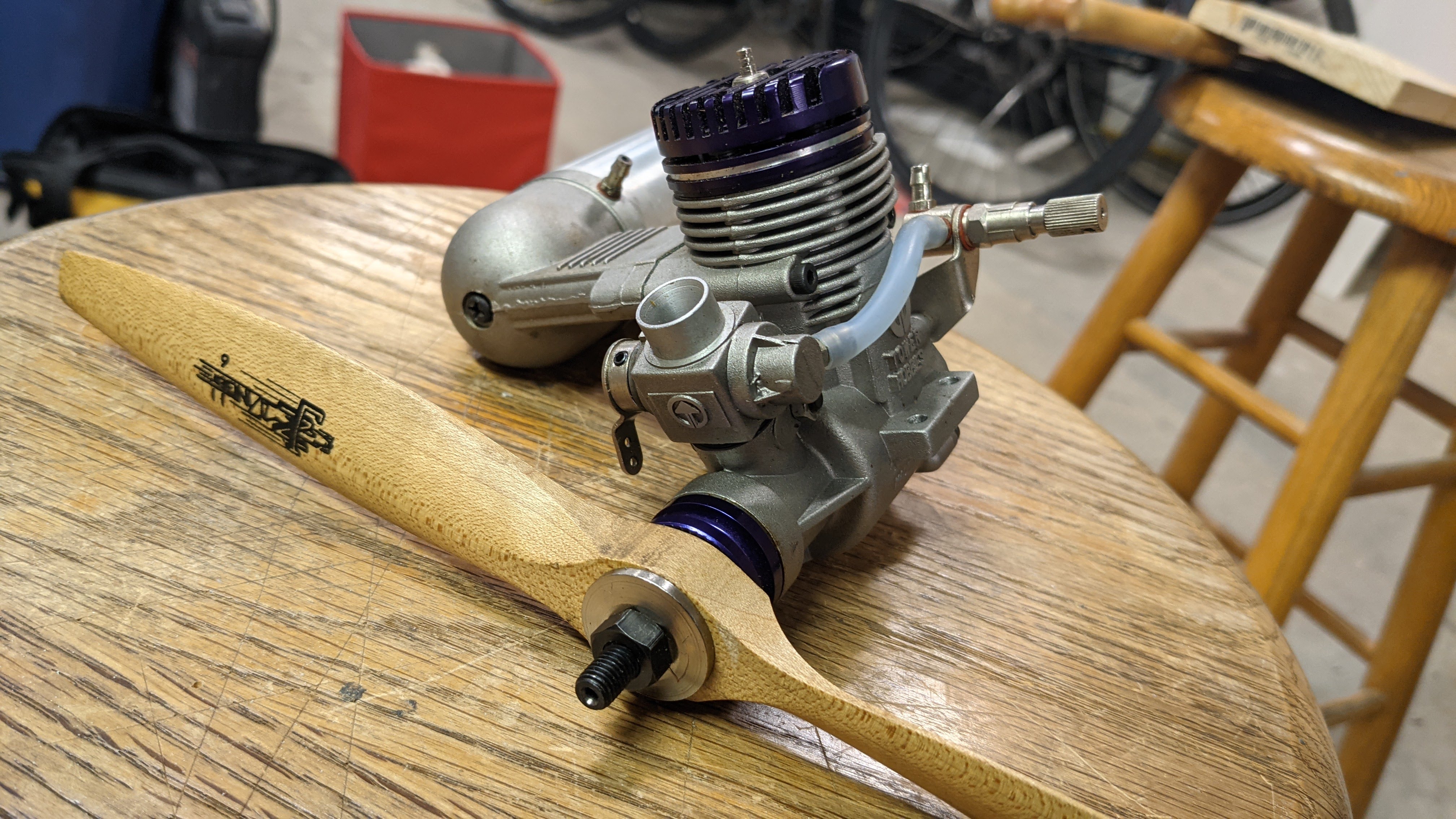 Also got a pretty thoroughly gummed and siezed OS 20FP for 20 bucks. Until I got it home I thought it was a 25FP so I could use it on a twin with the other 25FP I've already got, but I guess that's not the case Either way a bit of heat and Marvel mystery oil was all it took to get it going again. It's a bit overpropped on a 9x6 MAS but it was the best thing I had that didn't involve chopping up a prop. I think it'll be much happier with a 9x4, and it would love that on a slower airplane. Other than that it ran perfectly. Not like that's any real surprise, just OS being OS.

No application lined up for it at the moment, so it goes in the unemployed engine bin. It'd be happy on an old-timer, and that's what I think I'll do with it.


I also got a Norvel 049! It was on an old beat up glider that nobody seemed to want. When the meet was almost over and people started packing up, I offered to get it out of his sight for him for $10 and it came home with me. I'm slightly bummed that this isn't the version with the RC carb, but that's no big deal because swapping it out for the Cox RC carb that EX makes shouldn't be too hard. I would use the Norvel carburetor, but they're difficult to find not already attached to an engine.

Originally I wanted to put this on an S-tee but I think it might have a little too much power for one. It was designed to fly on Cox reedies after all. I didn't even get it fully peaked out in this video as it started trying to escape its mount and was duly shut off. Also whoever designed the muffler on this shouldn't be designing parts for engines. I tried pointing it in a direction to get the least oil everywhere but it decided to start spinning around like a drunken ballerina instead. I think if I mount this on anything I'll use threadlock or something to hold the back part of the muffler from spinning around. Speaking of that I wonder if anyone has drawn up a 1/2A sized Kaos? This would be perfect for it.