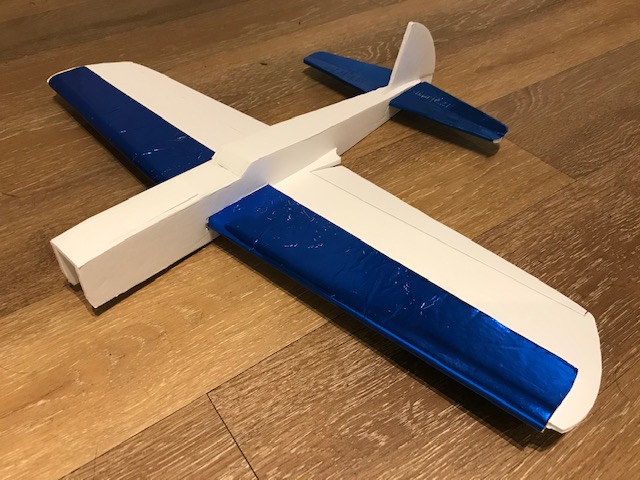 If you can build a MM Scout this plane is only slightly more difficult. Fuselage is a basic box, tail is straight forward. The rudder and elevator servos are external. And there is adequate room inside for electronics. The wing is a symmetric KF airfoil. I stripped the paper off of the inside of the outside foam piece (I hope that makes sense). Then instead of one cut on the fold line that is beveled, I cut on the fold line, and made 3 cuts 3mm apart on each side of the fold line. Then I ran the point of a bamboo skewer down each cut several times. This gave a very smooth curve to the front of the wing (I read about this method on the forum for the Wea$el glider). 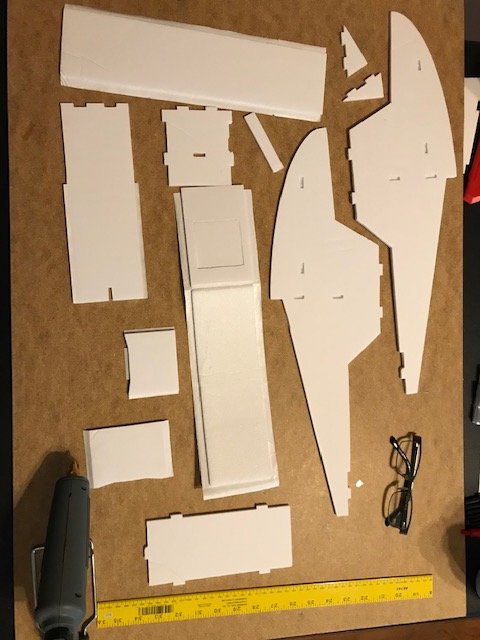 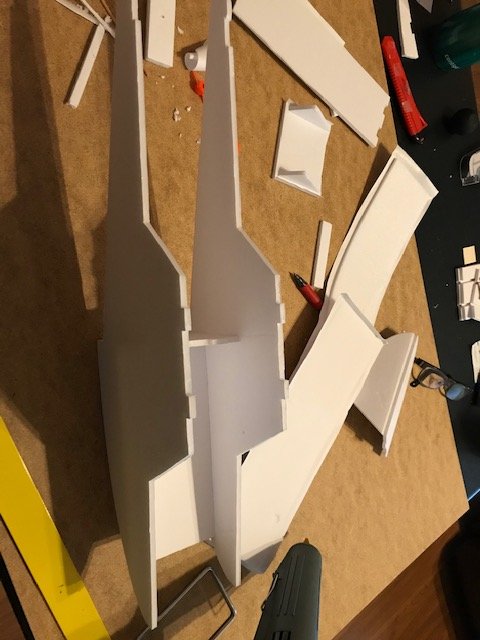 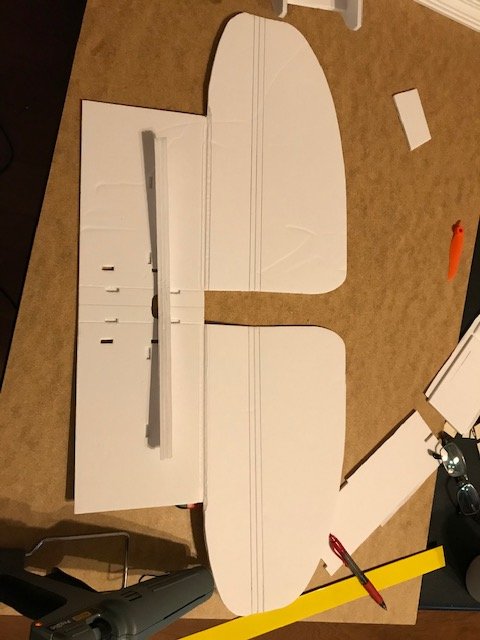 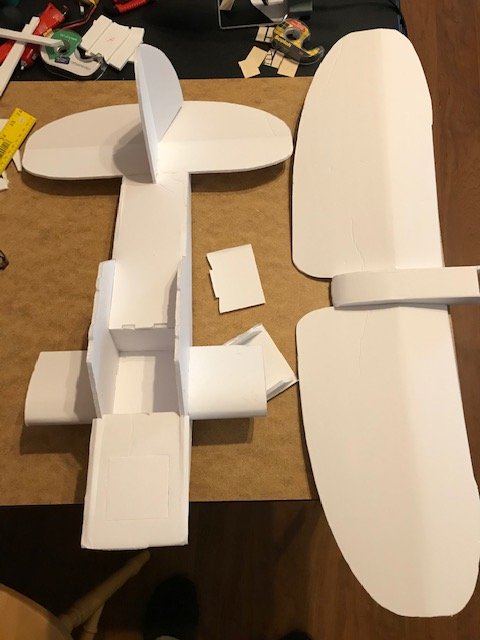 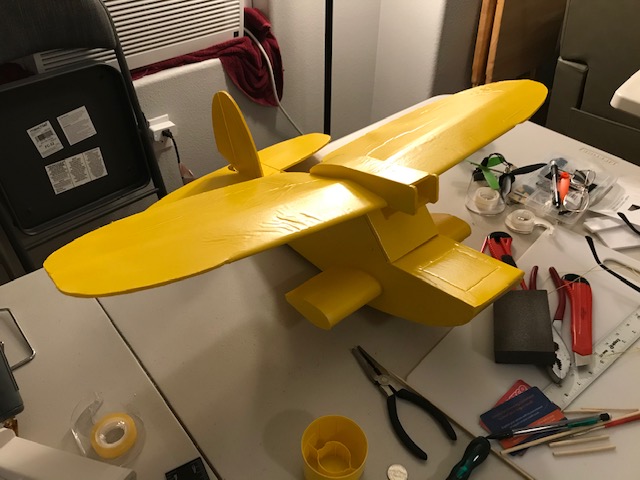 Mods include sponsons instead of tip floats. Wingspan increased by 2 inches each side. Wing removable held by dowels and rubber bands. And wing spar made from 3 layers of laminated FB.
Plane built from 2 sheets of Ross FB. Ready for paint and electronics (FlySky receiver and 2 9 gram servos), might add ailerons later.
Motor 1808 2400kv with 5x4.5x3, might use 2204 2300kv with 6x4.5x3 if it needs more thrust.
30a ESC

There is nothing especially difficult about building this model, there are just a lot of pieces. The good part is that all of the pieces lock together securily. One of the best things about the design is the immense amount of room inside for electronics. If I want to try fpv or a flight controller setup later, this would be my first choice. My sponsons added about 1 hour to the build time, but I think they will be well worth it. They should be a lot stronger than tip floats.
Flying

I have two brief flights today, and hope to fly more on Tuesday (it was to windy today for my limited ability). Based on these two flights, I think that without the wind, this plane should be as easy to fly as the MM Scout.
Last edited: Mar 15, 2020 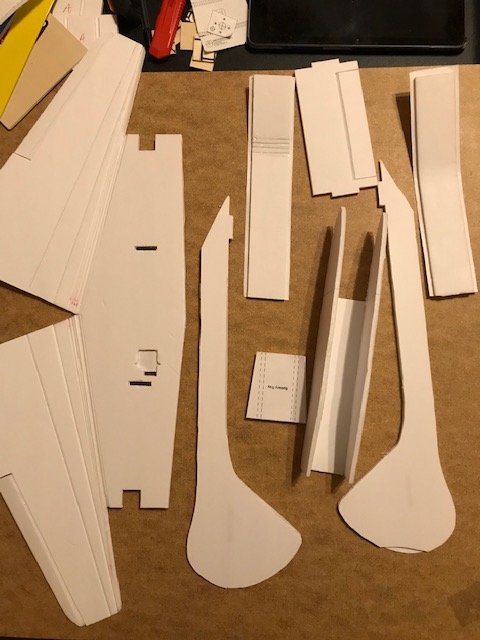 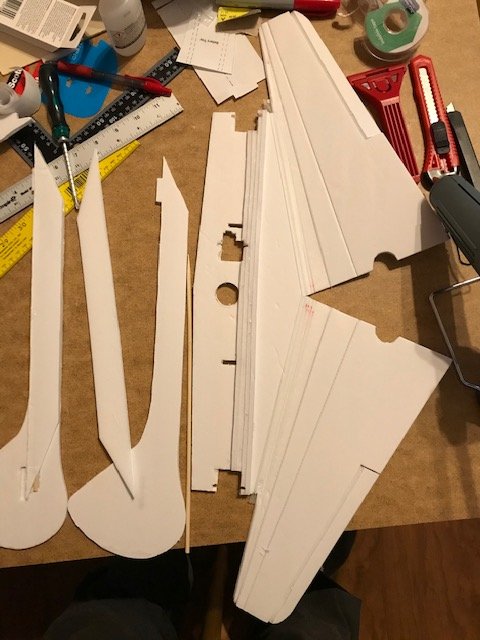 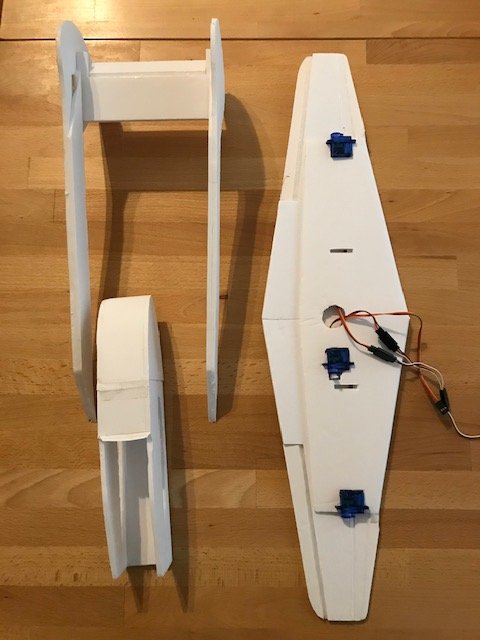 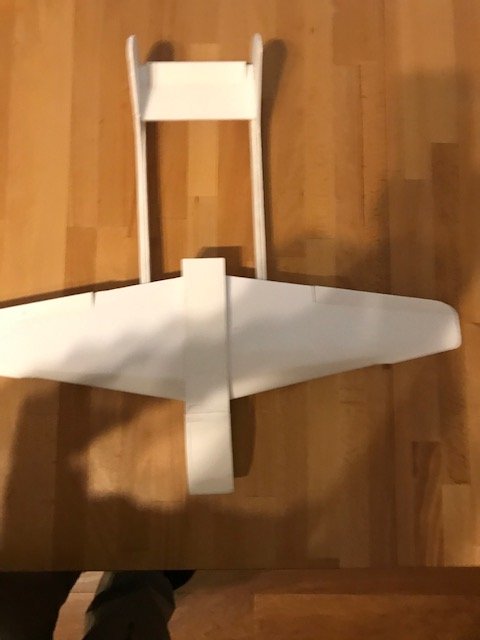 Most of the plane was cut from 1 sheet of DTFB, wing was cut from Ross FB. (I messed up gluing the first wing)
Two mods.
First I used a 10 inch skewer in the tail booms with a FB doubler (didn't have balsa).
Second I created a short fat stubby power pod to make access easy, so the front and back of the fuselage come off.
I used 9g servos all around.
Motor currently is an 1808 kv2400 from HobbyKing.
ESC 20a
Receiver Turnigy (Flysky) TGY-i6x. 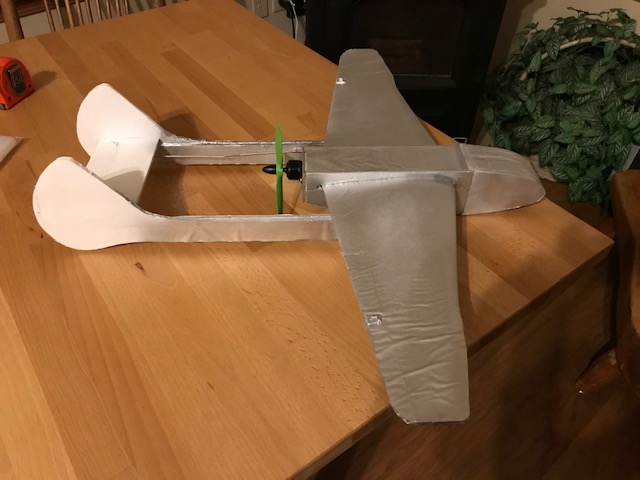 Tail and wing tips will be painted red, as soon as it warms up again.
Ready to fly, everything in it except the battery.

Really a fairly easy aircraft to build, the only complexity is folding the wing over symmetrically, and the curved nose. It does need a cockpit canopy, for looks, which is not in the plans.

Flying ?????
It is a great looking little model, some people report being able to exceed 100mph with a 4s setup. I haven't flown it yet, primarily because I'm chicken to. But, I'm looking forward to trying it out when I have some more experience.
Last edited: Mar 15, 2020 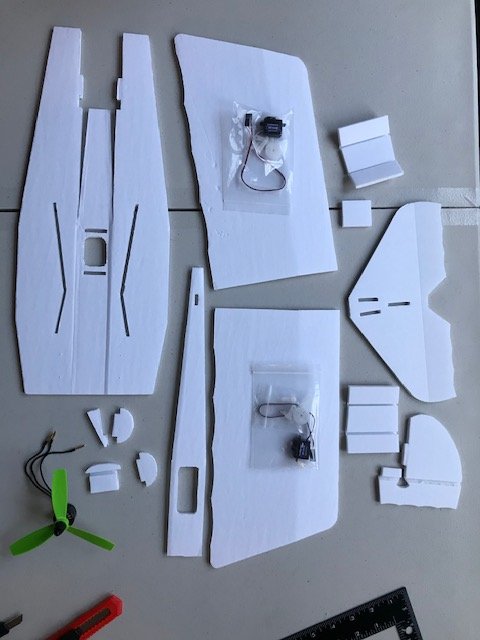 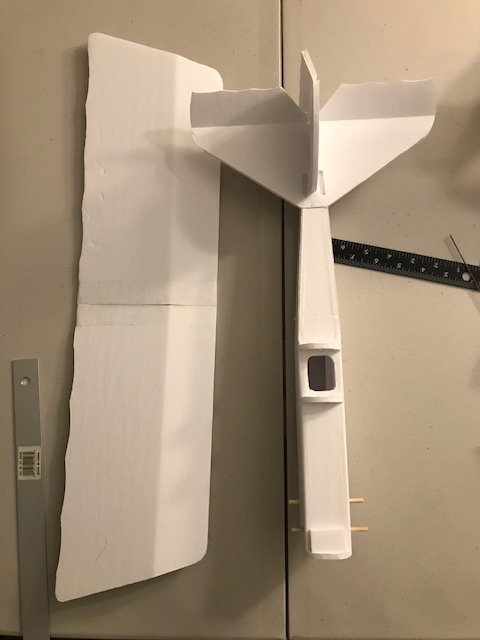 Entire plane was cut from 1 sheet of Ross FB. 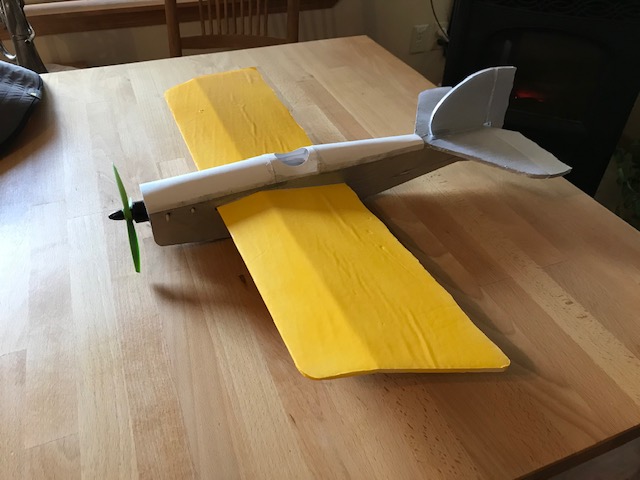 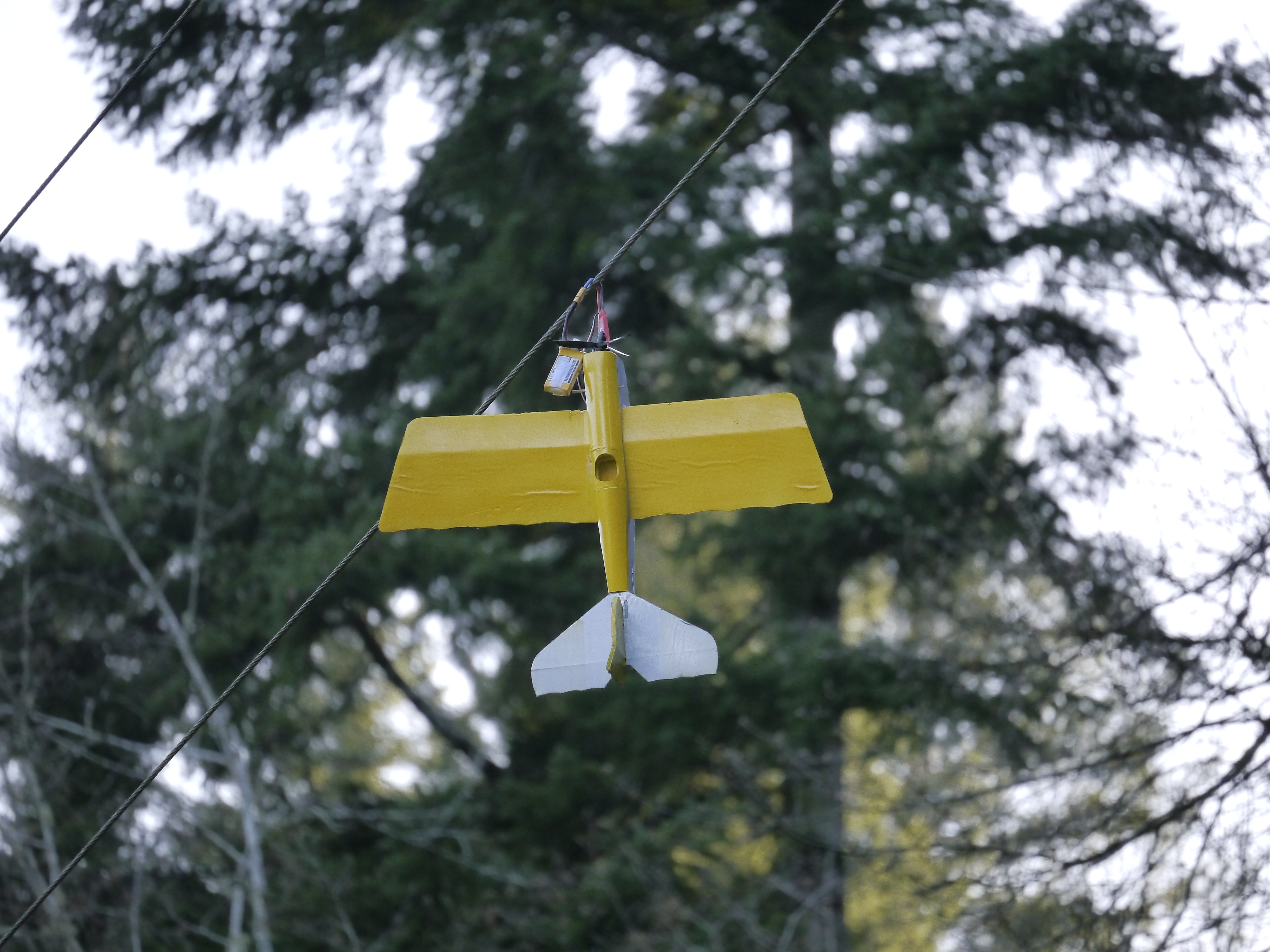 The MM Scout is even easier to build than the Tiny Trainer. The only trick is that space is a little limited inside.

This is the easiest plane to fly that I have tried so far. The wire happened on my fourth flight, I had already made three short flights without damaging the plane enough to make it unflyable. Just a minor dent in the wing from clipping a tree.
I don't have a video of the maiden flight, but I think the picture tells the story pretty well. This was actually the fourth flight, the first was a low powered glide to check trim. The second and third were a couple of right turns followed by left turns, followed by a semi-controlled landing. The fourth flight I was doing more turns when I hit the wire I was standing under. The battery flew out over the top of the wire, and there it hangs. Three days later the wind blew it down, after hitting the wire, and spending 3 days in the rain and snow, the main damage is that the battery is completely dead. This is a tough little plane.
Last edited: Mar 18, 2020 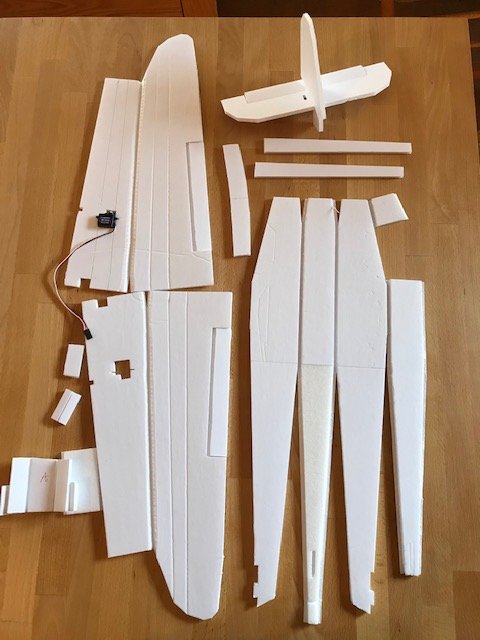 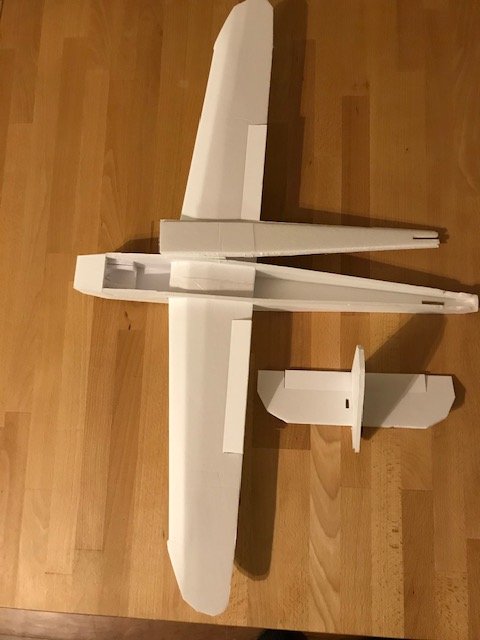 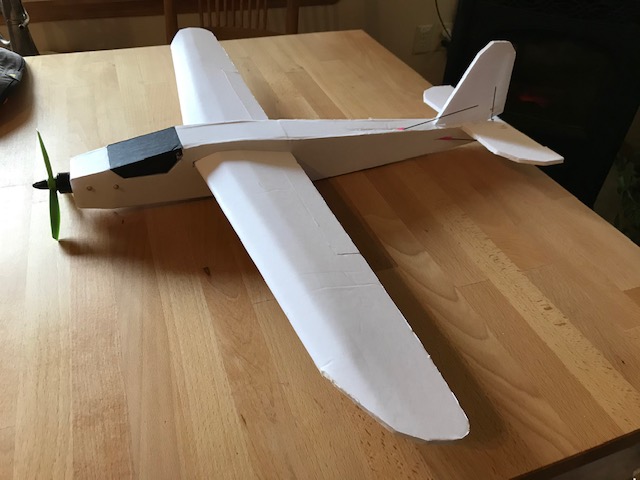 Entire plane was cut from 1 sheet of Ross FB.
I glued the main sections of the Sperber together this evening. Servos (Turnigy TGY-1551A) are installed in the wing.
I am trying to keep this build pretty light.
Motor 1808 kv2400 from HobbyKing.
ESC 10amp. 10 gram.
Receiver FS2A, Flysky compatible 1.7 grams.
Last edited: Mar 1, 2020 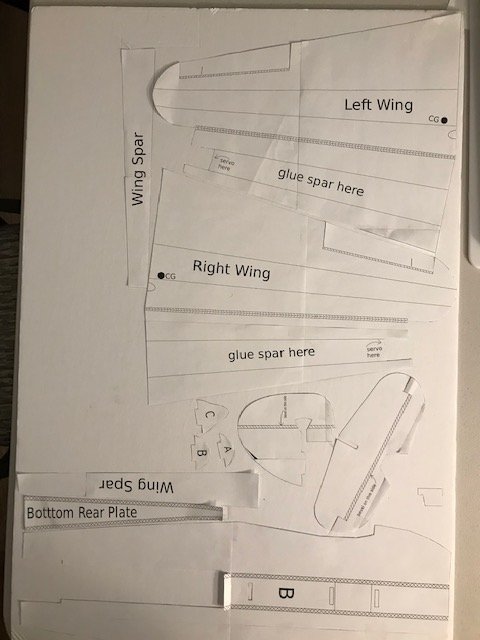 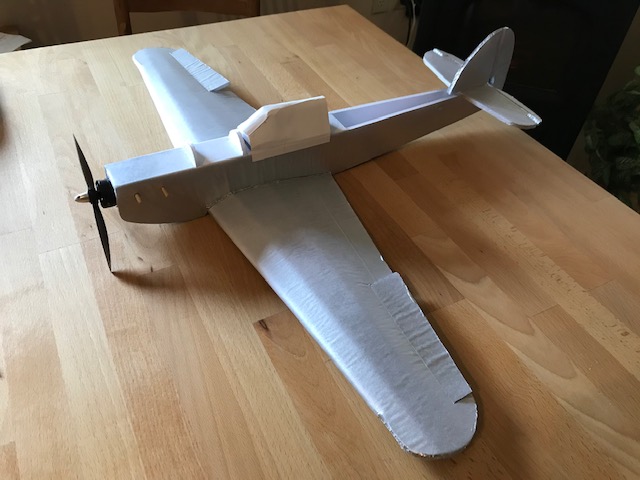 The build process is fairly straight forward, the only real difficulty I had was keeping the tail of the fuselage aligned during gluing. The patterns for the poster board parts needed a little fine tuning also. On the other hand you got to love the way it looks.

Mentor
#12
Your builds are looking good!

#13
The Hangar said:
Your builds are looking good!
Click to expand...
Thanks, my only previous foam board build was the Tiny Trainer, but I built a lot of balsa models back in the day.

Mods include sponsons instead of tip floats. Wingspan increased by 2 inches each side. Wing removable held by dowels (not installed yet) and rubber bands. And wing spar made from 3 layers of laminated FB.
Plane built from 2 sheets of Ross FB. Ready for paint and electronics (FlySky receiver and 2 9 gram servos), might add ailerons later.
Click to expand...
I gotta build me a quack!

#15
FoamyDM said:
I gotta build me a quack!
Click to expand...
I will hopefully paint the Kwak tomorrow or Monday cann't wait to see how she flies. The mods I did were primarily to make it stronger, slower and easier to fly.

#16
Oh, good luck at the plane and the painting I'm looking forward to seeing how it turns out all around.

#17
Feb 29 is coming to an end, FTFC20: Build-ruary is done, except for maiden flights and reviews.
I managed to fully complete just one plane. The AP Kwak is painted, has full electronics, and is ready to fly.
And, I have 5 planes that are nearly complete, mostly they need some paint and finish work (it's been to cold & damp to paint).
I hope to be able to paint this week and do maiden flights next week.

#18
Nice work so far. I can't wait to see them all fly!
I realized this weekend, that I squirreled away most of my 2 cells and micro 3 Cells somewhere which means no maiden. I did maiden teh BD8 and found it lacking in authority. so I will need to add the upper wing flaps.

#19
FoamyDM said:
Nice work so far. I can't wait to see them all fly!
I realized this weekend, that I squirreled away most of my 2 cells and micro 3 Cells somewhere which means no maiden. I did maiden teh BD8 and found it lacking in authority. so I will need to add the upper wing flaps.
Click to expand...
It has been 40-45° F and 90-100% humidity for the past week, so no painting. Tomorrow is supposed to be 53° F and 40%, so I hope to be able to finish painting, and do maiden flights next week.
Good luck with the BD8.

#20
Well Build-ruary has come and gone. I built 6 new planes, 3 of them well beyond my piloting capabilities. One the Sperber that I hope to be able to maiden soon. And 2 that I have maidened. I had a great time building, learned a lot, got into some interesting discussions, and am looking forward to next years Build-ruary. In the mean time there is the FTFC20 - April Showers Challenge https://forum.flitetest.com/index.php?threads/ftfc20-april-showers-challenge.62316/ and the Planedemic https://forum.flitetest.com/index.php?threads/the-great-2020-quarantine-build-off.62361/page-6.
You must log in or register to reply here.
Share: Facebook Twitter Google+ Reddit Pinterest Tumblr WhatsApp Email Link
Menu
Log in
Register