#1
This is my entry for the FTFC20 Classic to Modern Forum Challenge!
(in the hopes that opening a thread will help me get my butt in gear...)

The Subject is the Carl Goldberg "Electra", an electric powered glider from the late 80s/early 90s

The Electra was my first powered rc plane and, at the time, a bit of a disappointment.
Running a Mabuchi 550 brushed motor with an 8x4 prop on a 1300 mAH 7 cell Nicad this thing was not only underpowered and struggled to climb but the added weight made it kind of a pig in the air once you gained enough altitude and tried any kind of soaring.
I was told the plane made an excellent glider once you removed the battery and prop but my high start attempts proved less than successful
After I crash I ended up shelving the plane, along with RC flight for the best part of the 90s and 00 years until Flite Test and some gentle coaxing from a few friends brought me back.
I still have the fuselage that I cobbled back together from the splinters I picked up at the field and the wing which is mostly undamaged at home.
In a bout of nostalgia I also bought an unbuilt kit off of my local hobby shop a year or two back, So I got the original plans to work off of.

Design brief is as follows:
My plan is to first build a roughly 60" Version as proof of concept and then maybe scale up to the original 80". This will hopefully let me get half a wing onto a single sheet of foam.

Caveat: I've been known to start projects that I never finished, mainly by overcomplicating things and then getting distracted by the next shiny thing.
Here's to hoping that doesn't happen this time...
Last edited: Sep 9, 2019
C

#2
Progress 09/01/2019:
Instead of dragging my 20+ year-old build plans through my scanner I managed to download a build plan off of outer zone: 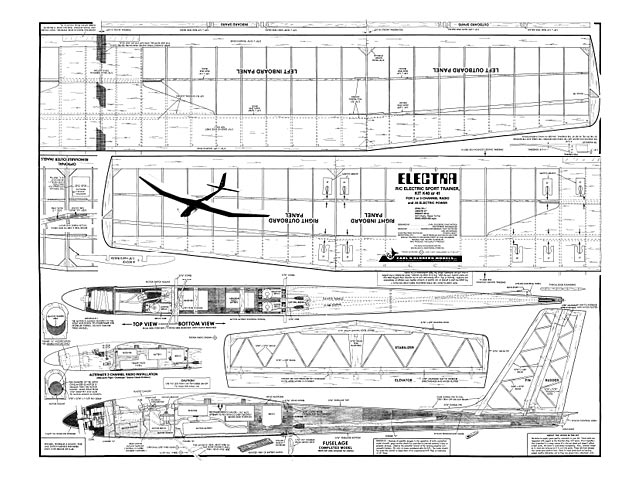 After converting it to a bitmap I slapped it onto my Fusion360 workspace and started drawing the wing. Let's see what tomorrow brings...
Update 09/08/2019:
Sadly nothing tangible happened this weekend, but I should have a wing by the end of the week.
Last edited: Sep 9, 2019
C

#3
In the face of my abject failure to produce anything presentable over the weekend (I went flying instead, not too bad of a trade, really) I want to at least share some of my plans for the build.
I will probably have to play around with the length of the nose and tail a bit, since my plan is to be able to fly with a variety of batteries.
(A light loadout for improving soaring capabilities or a heavier one to increase powered flight times)
Last edited: Sep 9, 2019

Mentor
#4
That sounds like a good plan to me! Might consider using something like a fiberglass arrow shaft as a wing spar to make sure she doesn't do the "taco" pulling out of a loop.
C

#5
rockyboy said:
That sounds like a good plan to me! Might consider using something like a fiberglass arrow shaft as a wing spar to make sure she doesn't do the "taco" pulling out of a loop.
Click to expand...
Wouldn't that be considered keeping true to the spirit of the original?
Not to worry, I have a contingency plan should the wing be prone to failing. Now, first I need to build one of them things.