I am planning a high powered, high speed flying wing build for LOS flying. Its going to be based loosely on the Versa wing, with a larger wingspan (roughly 1.5m) and a cutout in the rear to move the motor forward for CG purposes. Power system is as follows:

As the plan is to build a flying wing, it will obviously use elevons for control. I am brainstorming using 2 servos per control surface to make sure that the servos can handle the forces at high speed. If anyone has used a similar setup, I would like to hear about it. I'm wondering if it would make more sense to have 2 elevons on each side with their own servo, or two servos driving each large elevon. Or maybe the best solution would be to get something larger than the tower pro 9g servos that I've used on all my other builds. Input and feedback is welcome.

The other question I have revolves around the battery. V1 of this wing used two 1500 mAh LiPos in parallel for two reasons: First of all, 2x35C gave me enough sustainable current to feed this motor, and secondly, the smaller 1500s could be moved far enough forward to balance out the wing. I would like to avoid paralleling the batteries if possible and switch to a larger 5000 pack. It should help with balance and provide some more flight time. If for some reason I can't get the 5000 to fit, is it possible to use 2 parallel harnesses to hook 3 batteries together? Two would be on one harness, and then that harness would connect to another harness with a third battery on it. Would that work or would it cause problems with the third battery? Again, anyone with more experience is welcome to chime in.

@Hai-Lee I'm tagging you because I feel like you know the most about some of this stuff and you have a lot of building experience.
Last edited: Apr 28, 2019

#2
Some pics of V1 which is the basis for this build: 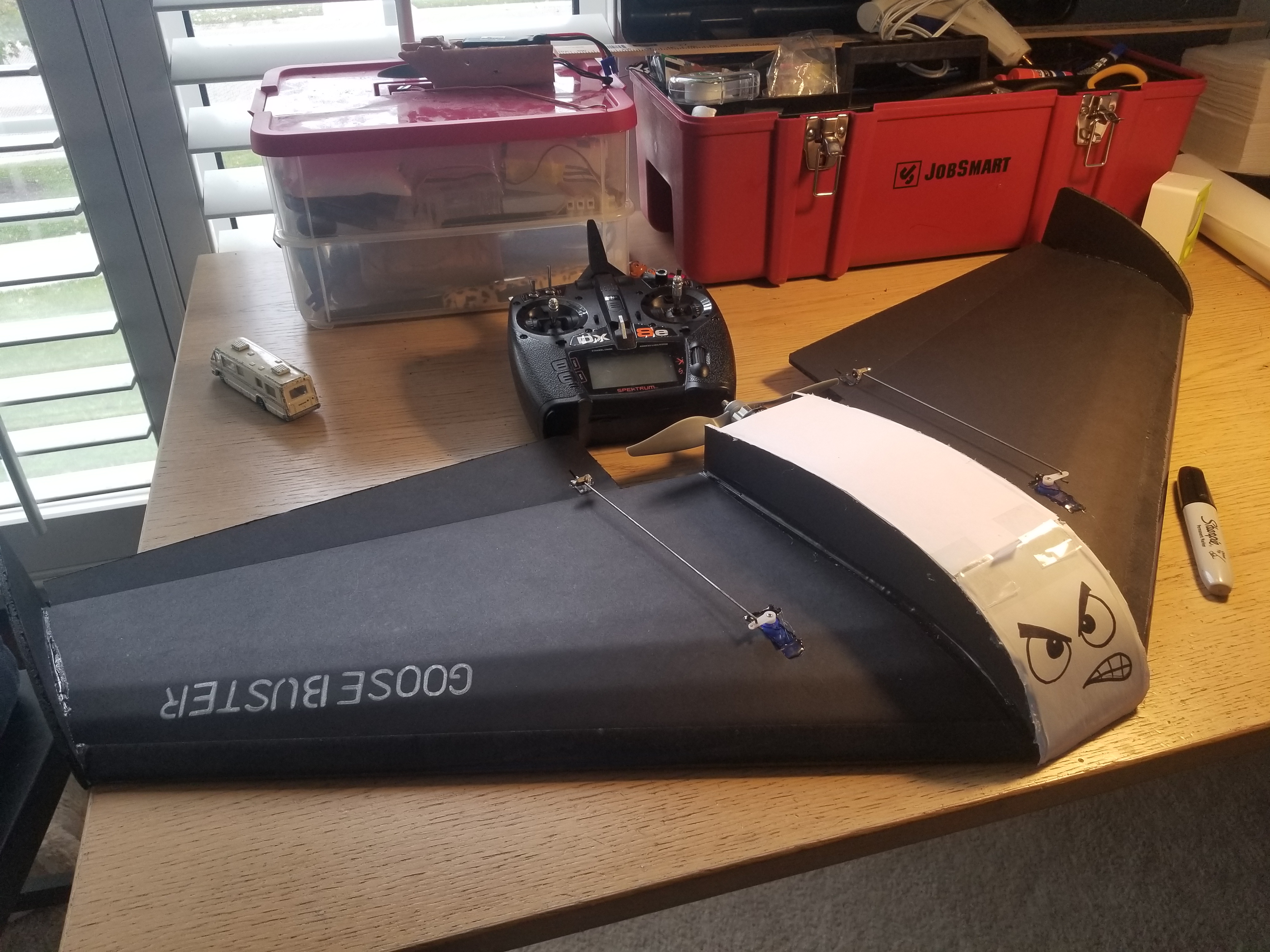 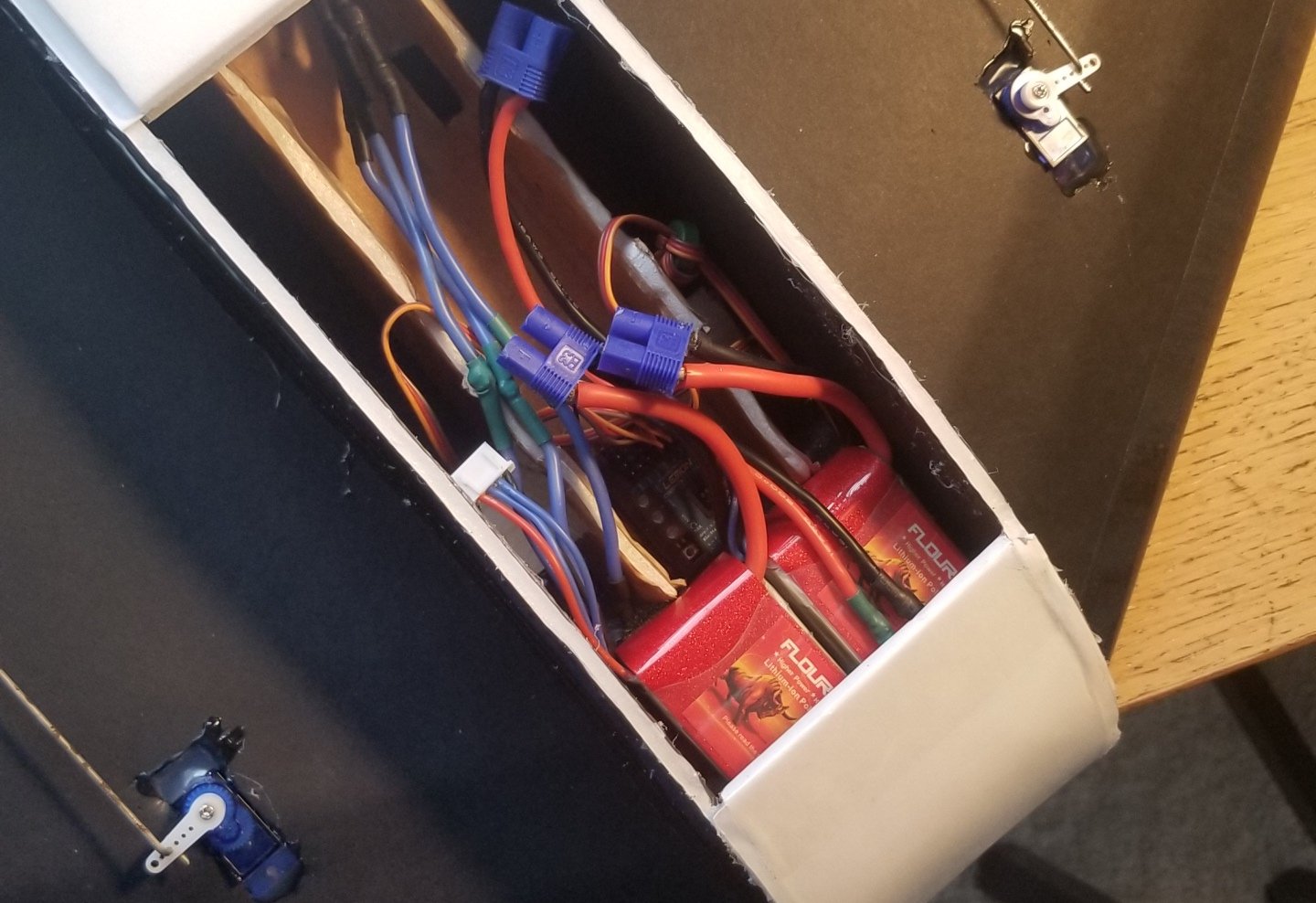 #3
Arcfyre said:
Some pics of V1 which is the basis for this build:

Click to expand...
I cannot answer the battery question as I have not yet tried to hook up 3 batteries in parallel. Like you I am unsure if this is a wise move, it will definitely work but the effects on the batteries in the short and long term are something I cannot quantify.

As for the use of 2 servos, 1 servo, or what ever for the elevons is not the real issue you will face but rather the rigidity of the control surfaces and the wing itself. As your elevons are controlled from one end the ability of the elevons to oscillate in high speed flight is enhanced. The ideal location would be aerodynamically central which would be about 40% of the span from the wing central axis. The lift is approx max at the wing centre line and falls off in a curve close to an "X Squared" curve as you get close to the wing tips, (even with the tip fences. In addition another concern with oscillation is that the pushrods must be quite rigid as must the servo mount. Any play in the pushrod connections can also cause unwanted elevon oscillation/flutter so ensure every connection is firm but not binding.Set and use dual rate if your speed gets to the almost uncontrollable stage. Full elevator at low speed is good but at high speed it can weaken the FB hinge or even peel off the elevon!

Make the hinges as free as possible, and sealed with glue, any binding or resistance can cause the control surface to actually twist and give strange trim effects slow Vs High speed. If you do not have a very rigid wing spar make sure your next version does! On my small speed birds I use dual spar wings with short cord ailerons and a semi-symmetrical or symmetrical airfoil to the tips for low drag and a very strong and rigid structure. I folded one a few years ago and it was near catastrophic with the battery travelling a few hundred metres without the plane.

You can run multiple servos distributed across the wing but you could cause some flexing and long term weakening of the elevon itself if the servos do not move the control surface the same angular amount at each control horn at the same time. Use the same type and brand of servos, (do not mix manufacturers)!

In the old days you could find and use "Bellcranks" which you would bury in the wing and these could control multiple control horns in a very equal manner from a centrally located servo, (fuselage mounted?).

One advantage of using 2 or more servos per elevon is that you can actually split the elevons on each side and not only reduce the aerodynamic forces on each control surface but you could also have a mix setup for the inboard split elevons such that the aileron component of the mix can be switched out so that it operates as elevator only. This can really calm down high speed maneuvers.

As for the drag burying the servos would be well advised with just the pushrod coming through the wing surface. I believe you can byy some streamlined covers for the pushrod if you really want to smooth it out,

Finally ensure that everything you fit in the bird cannot move or fall out. High speed can mean very high aerodynamic forces and huge "G" forces. Something that i learned the hard way!.

I look forward to your results! Nothing beats speed except for the occasional sudden stop.

#5
Merv said:
Rudder and spoilers are 2 possible mixes with 4 servos. Spoilers, 1 up & 1 down on both sides. Rudder 1 up & 1 down on one side.
Click to expand...
I'm leaning towards dual elevons right now for that reason. It would add a lot of flexibility if I could get it programmed correctly.

#6
@Arcfyre - your flying is a pleasure to watch - Mr smooth!

#7
bracesport said:
@Arcfyre - your flying is a please to watch - Mr smooth!
Click to expand...
Thank you

#8
@Arcfyre - maybe split elevens could pay a dividend - you could add Crowe brakes! 😆

#9
Looking forward to V2 your V1 defentaly flew amazing, and like @bracesport said the you are Mr. Smooth!

#10
If you really want speed then step up to 4S and forget 3S I would look at 3300 or so 4S battery before going thru all the mumbo jumbo of 3S.

#11
Bricks said:
If you really want speed then step up to 4S and forget 3S I would look at 3300 or so 4S battery before going thru all the mumbo jumbo of 3S.
Click to expand...
Yes. It's definitely on my mind. I think my plan is to fly the prototype on 3S and if everything works out, step up to 4S.

#13
Captain Video said:
Why "GooseBuster"
Click to expand...
Mostly it's a dumb dad joke, lol. I like to remind the Canada geese in my neighborhood that the airspace above the pond belongs to me, so I have a fast loud wing to scare them off. Obviously this is only for laughs, I would never harm a goose. Goosebuster sounded good, so I'll probably name this next one Goosebuster II.

#14
With amount of disdain I have for those flying rats, I would never deliberately harm one unless one should attack me or one of my Golden Retrievers while out on a walk. We have a retention pond nearby and they come in droves and leave their droppings everywhere.

#15
Took the Goosebuster Jr. up for a spin this evening. Its the small baby version of the wing in the second post on this thread.

It moves pretty well, especially in the wind we have. What worries me a little is the buffeting it seems to experience in the wind. Hopefully the big brother that I'm working on will be a little more stable.

#16
Working on Goosebuster V2. Here are some terrible work in progress pictures.

#17
Airframe assembled, ready for electronics. Wingspan is about 60"

This is a rough prototype to see if the airframe is even airworthty, as it's an untested design. I still have plans to use dual servos for the elevons, and I will probably increase the overall size of the control surfaces.

I have intentionally left off the winglets as I want to see if she is stable enough in yaw without them. If she's too unstable I will add some winglets for yaw stability.

Here she is next to Goosebuster I ready to fly.