Help! Help on scratch build. What should I adjust or change?

#1
Hi all, I need some advice on my scratch build. It isn't flying well at all and needs full elevator just to stay in the air. I just built this by what I thought looked good. I think I need to increase the wing angle as it flys with the tail hanging down. I also think I have to much dihedral. Is that Dutch roll in the video?

Not sure how to attach or embed the video as this is the first video I've put on YouTube. But here is the link

Mentor
#2
First off - what a great design for a plane! The stocking wings are cool!

Hard to tell from the vid but you could be tail heavy. How far back are you balancing her on the wing?

From the pics it's hard to see but I assume you have some right and down on the motor? The motor should be pretty obviously pointing down and right for this model.

Lastly, I think you are right, wedge a strip of foam under the leading edge of the wing to give you a little more wing incidence. But make sure you have taken care of the CG and motor thrust angle first.

#3
From what I can ascertain from the photos it appears that the wing camber fold is approximately in the centre of the wing at the fuselage and at around 30% of cord at the wing tip. This unusual wing planform has resulted in a wing that will generate the majority of its lift at the wing extremities and very little over the central portion, (50%).

The reason for the tail down attitude is the need to increase the wing incidence on the outer, (Lifting), portion of the wings so that sufficient lift is able to be generated to allow the plane to fly. This also allows the central half of the wing to contribute to the total lift but only a very small amount.

A revision of CG position is unlikely to correct this condition!

A simple test of my estimate would be to remove the wing tip extended TE and see it the plane will fly at all. If not then my argument is valid and a newer wing profile design is indicated.

#4
I can adjust the thrust angle. It actually has a power pod in it so it's kinda adjustable up and down. I had it pointing up. I raised the rear of the pod so that the thrust is in line with the cowl with the packages on it.

Here is where its balancing. And I'll do the raising of the wing. Thinking one or 2 sheet thickness? 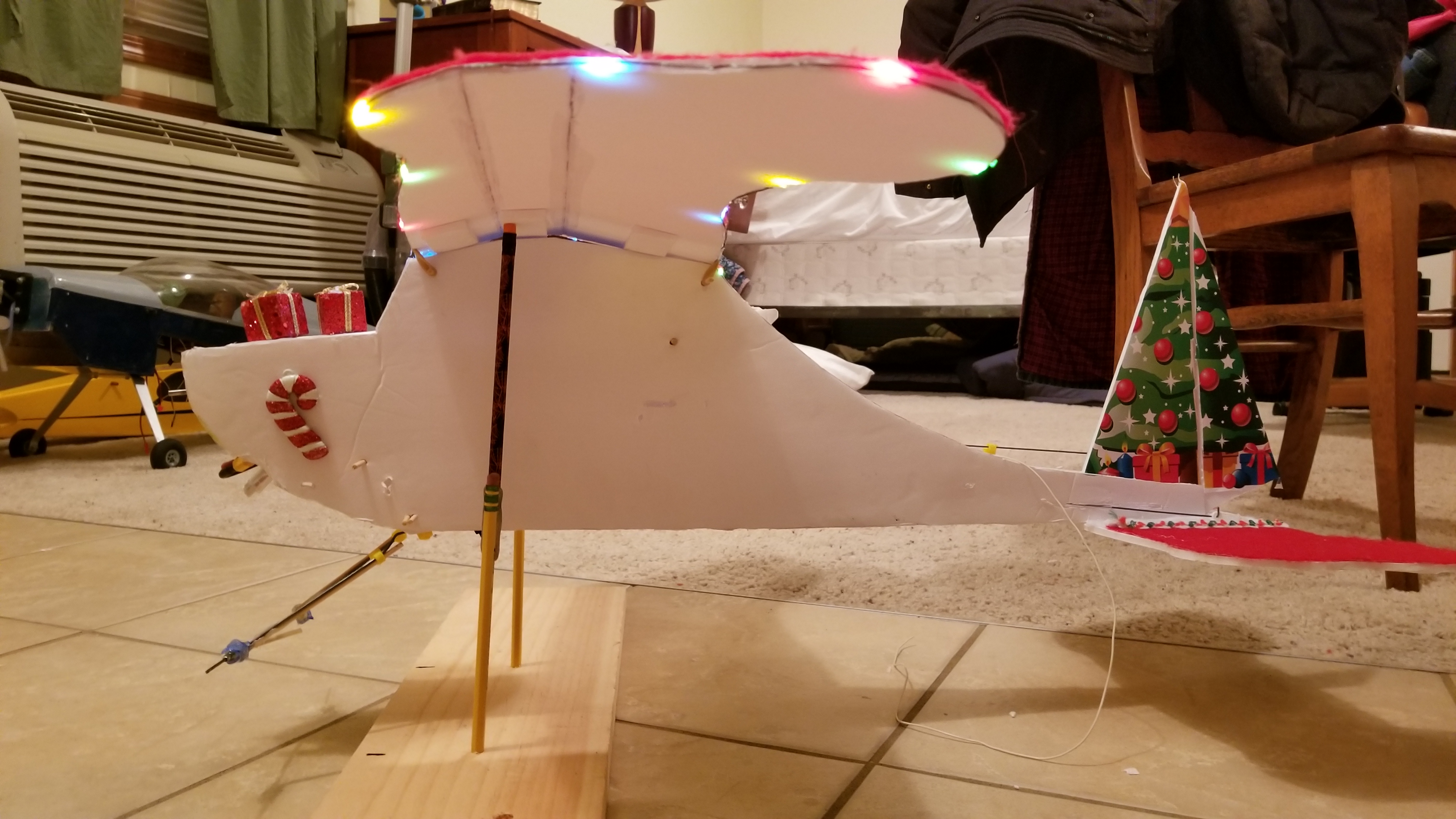 #5
Hai, you may be right. But I'll be honest. I'm not going to make another wing for this. We had stocking decorating contest at work which I wasnt going to do until I thought "hey could I make one fly" this is what I came up with. The curve isnt in the middle, well I guess the second band is close... dang 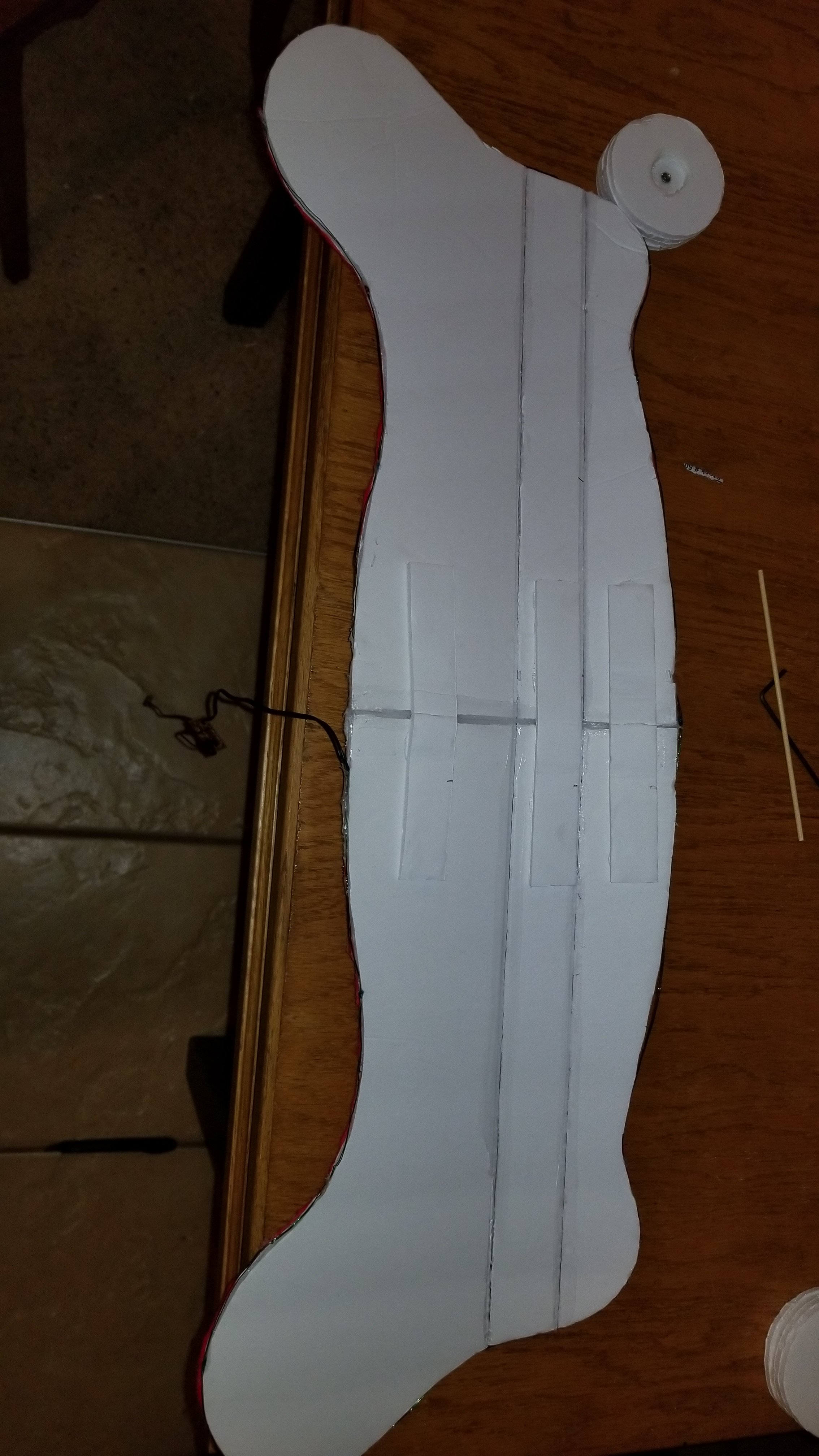 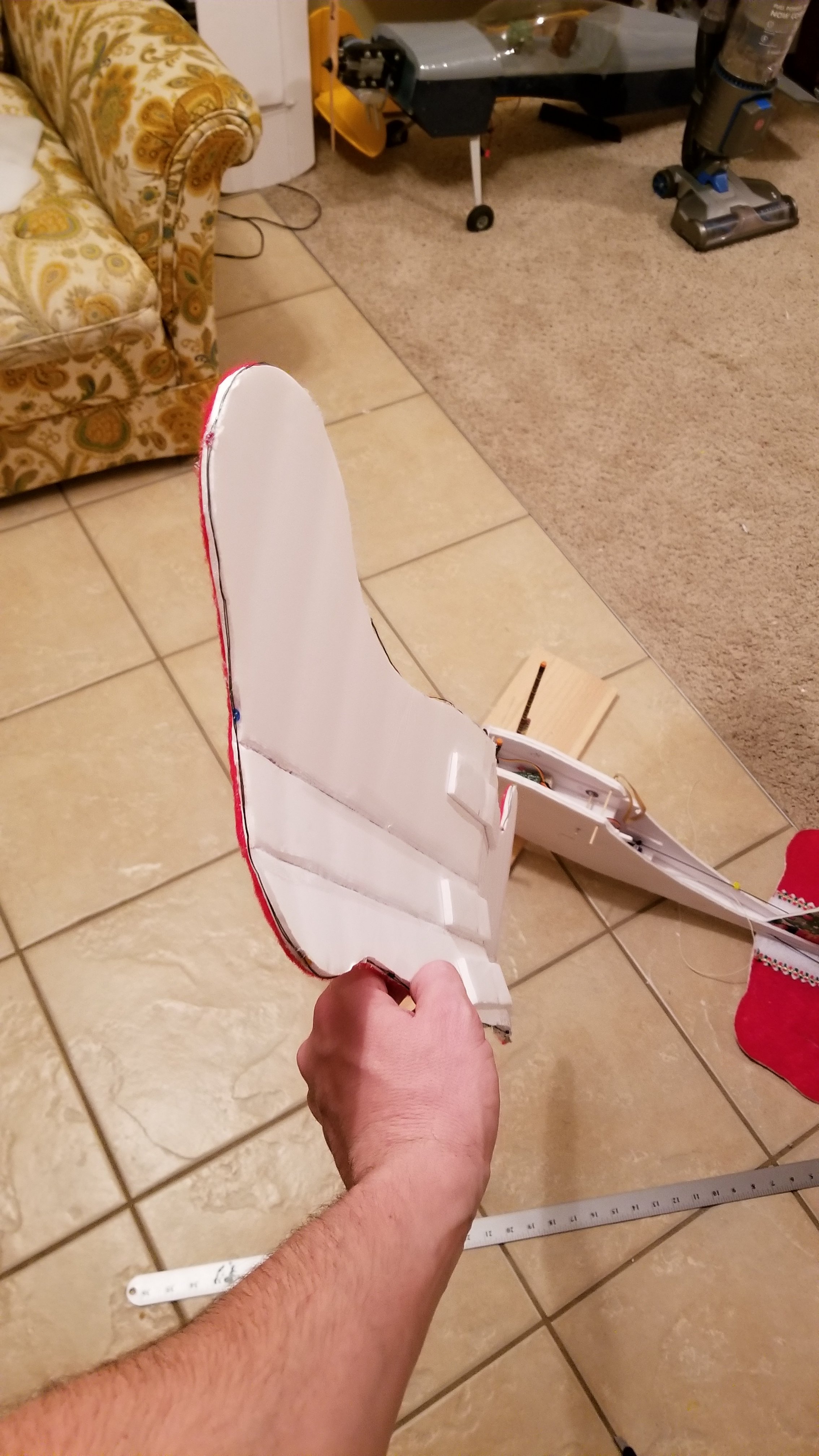 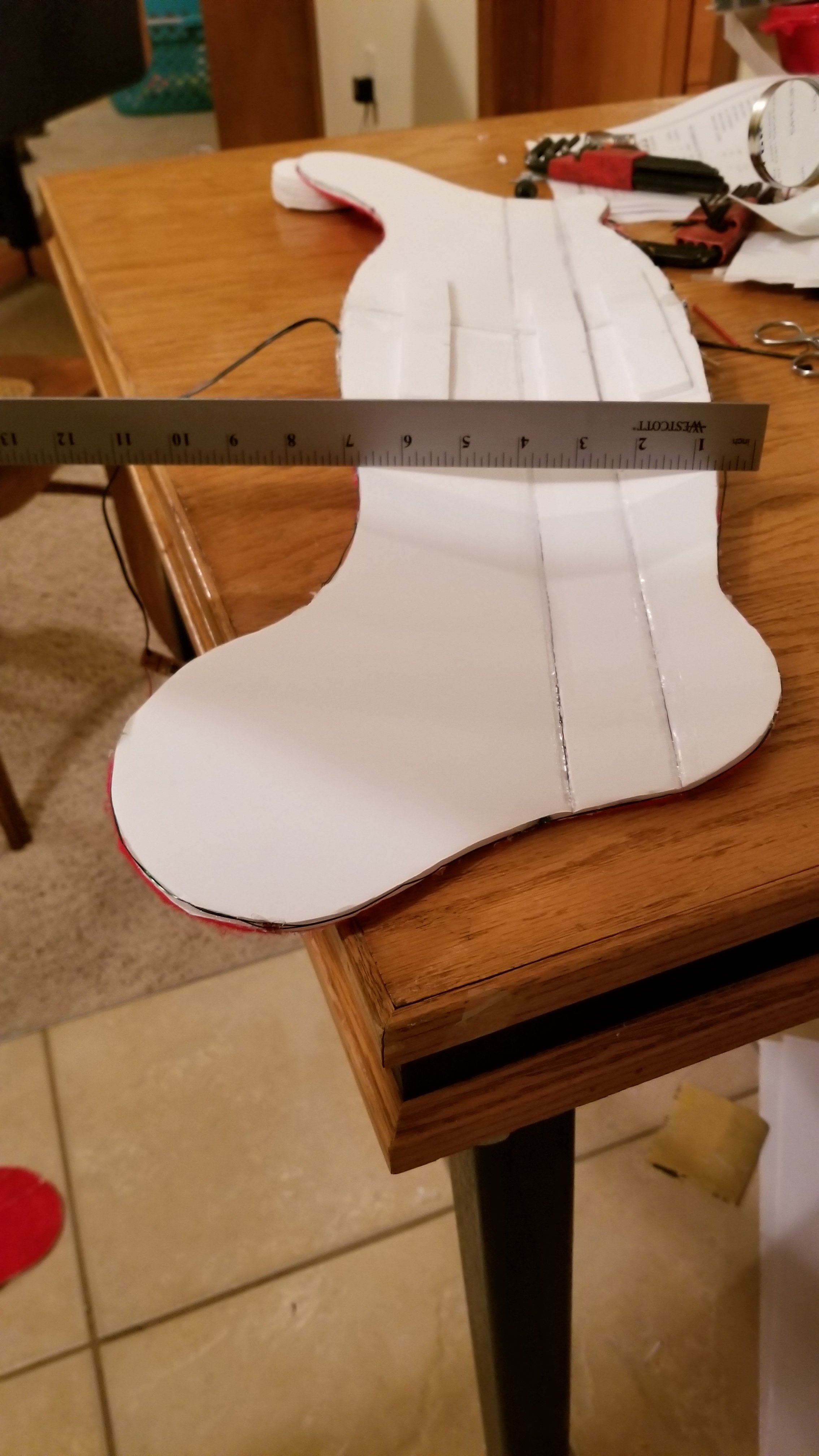 #6
If you are able to make the first contour bend far deeper and flatten out a little the rear fold. Fit it to the fuselage so that the forward contour bend is more pronounced and then try to do a gentle curve on the tips slightly upwards and see if it will take off from the ground.

If you get the wings as described above and equal from side to side it should fly a little better for you!

#7
Was thinking the same thing and was working in it when you posted. I dont understand curling the tips up though. Trying create equal lift across the wing? 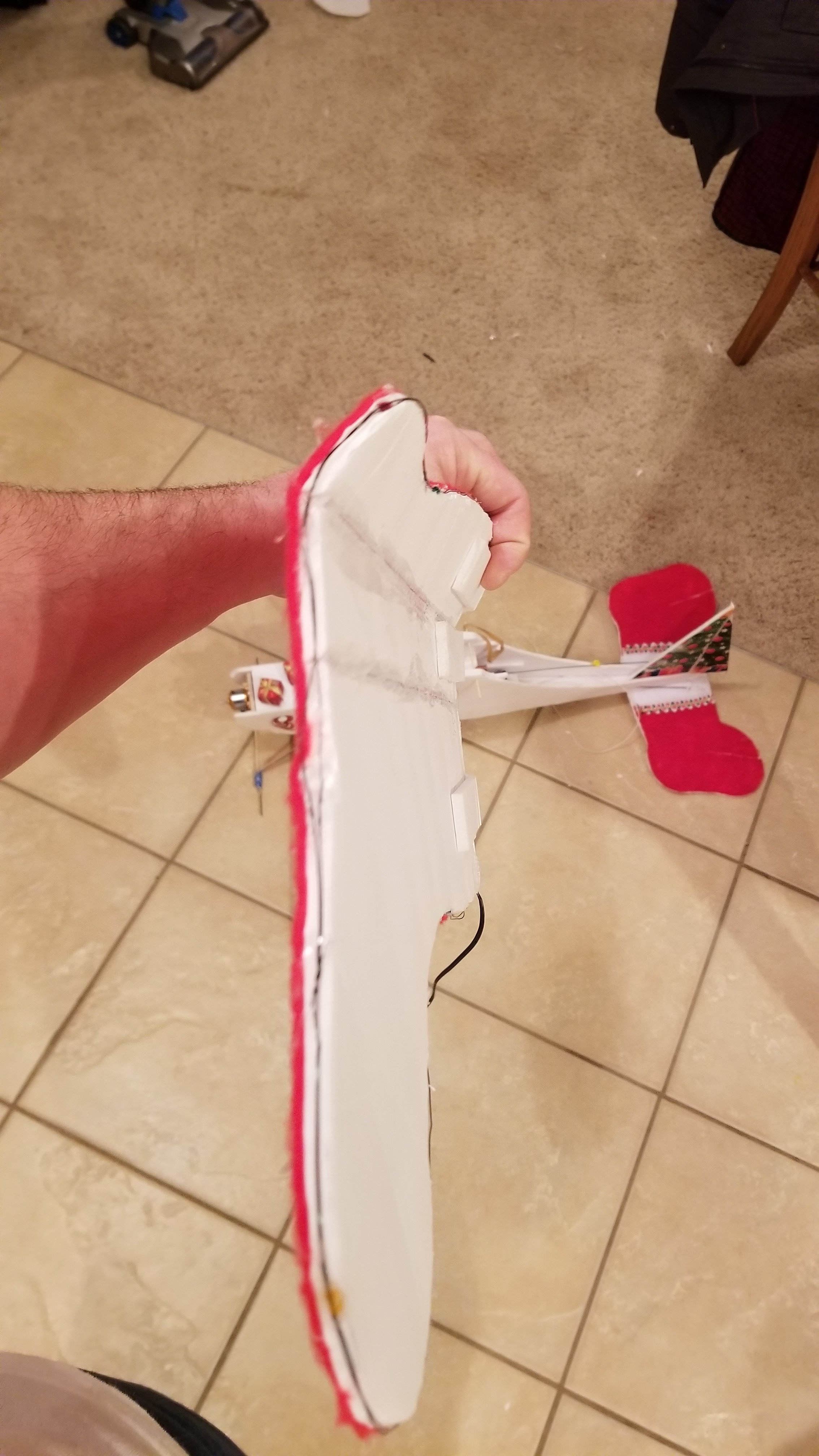 #8
This is what I came up with

#9
A little more sever than I originally thought but worthy of a test flight!

#10
Well this is what I came up with. I shortened the tail 2-3 inches as I am wanting to try and fly this on a 2 cell and I couldnt get it to balance. Going to go fly with my daughter tomorrow and see what it will do. It will be her first time flying and she is excited!

#11
I will look forward to the report on its performance!

#12
If it were me I would not shorten the tail but lengthen it!
The tail 'volume' is already small for that shape of wing. Make the nose a bit longer to compensate if you really can't maintain the CofG by moving the heavy bits forward.
With what is basically a rather flexible wing design the big increase in area towards the tip is almost bound to create odd yaw effects and likely tricky behaviour as the wing approaches the stall.
And make the fin bigger by at least 50% area to help damp out those unwanted yaw effects!
Just my opinion!
D

#13
From the first video, I would have left everything the same, but added more down-thrust to the motor. How much do you have? For a high wing like that, I'd say that you need at least 3 deg.
J

#15
Well we took it out to fly. And it flew much much better. Probably shouldn't have shortened the tail. I think the way the wing angle is, it just likes to fly with the tail down. I ended up moving my battery towards the rear and it flew better. Here is a video. I glued a spring phone holder to a brim of an old hat so I at least track with the plane even if it's far away or just in frame.