#101
I agree with most of the people on here that your plane looks and acts tail heavy, especially in a stall situation.
A few things I'd propose:

Test glide your plane.
If you can't get a calm day to do this maybe find a school gymnasium or similar. A basketball court should be big enough for just testíng gliding. You might even want to take the prop off for this or use the glider nose and some clay or coins taped to the nose to achieve cg so nobody complains about you scratching up their floors.
The ESC and battery can remain in place to power your receiver just cover the motor leads in tape so they won't short out and ruin your electronics.
For your test glide you want to give the plane a firm, level toss, don't overdo it.
The plane should glide straight for a bit and then assume a slightly nose down attitude as it bleeeds off speed without any input on the sticks. You shoudn't try any fancy maneuvering indoors anyway, just a nudge on the stick to correct the attitude before touchdown.

If instead the plane noses up and stalls even with the elevator surface in neutral you're dealing with a tail heavy plane. Add clay, or coins or whatever to your nose until you get a nice glide.
once you achieve that check and mark the cg your plane actually flies on in your wing. You'll want to keep it at the same exact spot when you install your powered nose again.

If your plane glides fine but pitches up under power you're dealing with a thrust angle issue, maybe your power pod got crushed and building a new one is in order.

Actually that was just one thing I proposed, if pretty detailed and a little long-winded.

Later on, outside if you're flying in windy conditions you might want to move the cg even further forward as that will help you penetrate the wind.

Hope I didn't bore you too much and best wishes on achieving flight. There's few things as exhilarating as your first successful flight.
(edited again: sooo many typos..)
Last edited: Sep 11, 2018

#102
Thanks for all your inputs. I have rebuild most of the fuselage of the TT again, only missing to add the electronics. 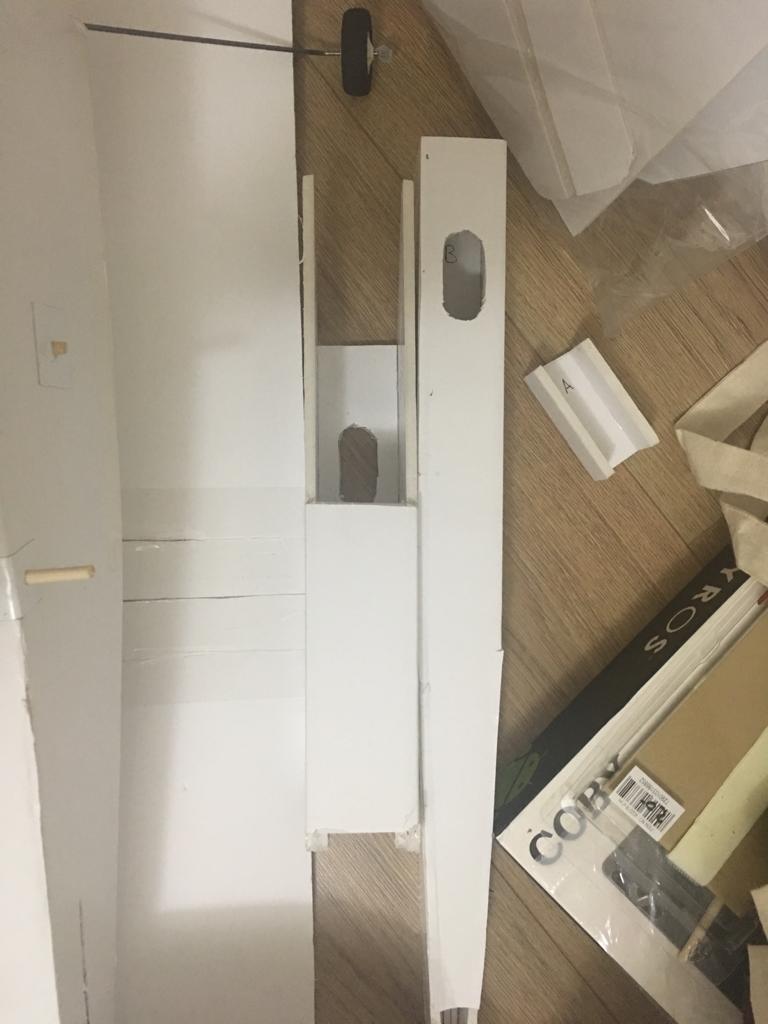 Hopefully will be able to get this done tonight.
After I finish rebuilding the TT I'll be taking Arcfyre's & Cranialrectosis's advice and make a high def video showing the balance point & CG of the plane as well as the elevator and rudder control surfaces so that you can give me your feed backs. I also cut out all the parts for the FT Mini Arrow since I had the plans glued to a foam board, which I couldn't remove. Regardless I will still be building the Versa Wing, since I have a few motors that can fit that build as apposed to the Mini builds.

#103
Errr, I am tired. Was up till 3 am last night to finish building the TT, so that I can go practice today while the kids are in school. Charging up the batteries and will so post a video of the control surfaces as well as the CG and balance.

#105
Looks OK to me. Best of luck during today's practice session.

Mentor
#106
Looks pretty good to me too.

Be sure the lipo can't slide around and GOOD LUCK TODAY!
C

#107
cranialrectosis said:
Looks pretty good to me too.

Be sure the lipo can't slide around and GOOD LUCK TODAY!
Click to expand...
I concur.
Best of luck.

#108
Yaba-daba-do!!!!!
I did it. I got to fly not lift and crash I was litteraly holding altitude. Managed to keep it high regardless of the wind that was quite strong like the last time I went practicing. Managed to get it to fly for about 5-7 mins. Only once though because when I tried to bring it back down to me I crashed it, and one of the servos must have disconnected. This led to the elevator being stuck up instead of being leveled which led to a plane stall, like in one of my previous practice sessions. Unfortunately I don’t have a video to show off because my wife wasn’t feeling good to tag along. I plan on fixing the issue tonight after my shift and hope to go practice again tomorrow, hoping that I’ll have someone to film it all. Wish me luck

#109
Lol! Figures the first time you get a good flight, we can't see it on video. Mayan, brother, I've been waiting WEEKS to see a video of you flying successfully. You're killing me!

All kidding aside, I'm glad you got a good flight in. It was a long time coming, well earned and well deserved.

One thing to think about, after a 5-7 minute flight your lipo voltage may have been low. This will reduce motor power and can potentially cause your receiver to brown out or lose signal. If you don't have one already, a lipo voltage tester is a great thing to bring with you for a little peace of mind. They are dirt cheap (under $3) and will prevent a low voltage crash. Avoid taking off if your per cell voltage is 3.7 or lower (7.4 total for a 2 cell).

I guess I'll have to wait a little longer to watch a video of you flying...

Mentor
#110
Checking in at work at lunch just to see how this went.

Way to stick with it Mayan.

I use something like this to alert me when the lipo gets low.

#111
cranialrectosis said:
I use something like this to alert me when the lipo gets low.
Click to expand...
I have the same one. Very durable units. They will still work even if you forget it in your pants pocket and run it through the laundry. Ask me how I know... 🤣
C

#112
mayan said:
Yaba-daba-do!!!!!
I did it. I got to fly not lift and crash I was litteraly holding altitude. Managed to keep it high regardless of the wind that was quite strong like the last time I went practicing. Managed to get it to fly for about 5-7 mins.
Click to expand...
Congratulations! There's nothing better than when things finally click into place, right?
Now go give your wife a double dose of care and attention, so she'll get well soon (... and *cough, cough* be able to get some video for the rest of us...)
(edit: So I'm not easily excitable, but I think your success justifies the use of an exclamation mark.)

#114
Wow thanks for all the great support. I dieing myself to show off on video (hoping that I’ll be able to mimick yesterday’s success). I fixed the servo yesterday so I am ready to go practice today after a few chores that I have to get done with. Hoping to find someone to tag a long to film me.

#115
Congrats and keep it up. Once you've gotten that first successful flight there's no turning back!

#116
Hey All,
This is my moment to say thanks for the support and showing off the last practice session.
First of all for a lesson that has been learned once again the hard way. And I must shout it out loud a millions times in order to remember:

Here is a link to a playlist of today's practice session: 14-09-2018 Practice Session. If you are asking what's that on my forehead well that's a GoPro camera taped to my head with some sticky elastic band that I got in a Jackpot purchase of goodies a few weeks ago. So stayed tuned for more videos from that after I find time to look at them and edit them if need be.

#117
There we go! I've been waiting to see that for a while now. Great job buddy. Nice to see you really flying.

So now that you've gotten a taste of success, whats next?

#118
Arcfyre said:
There we go! I've been waiting to see that for a while now. Great job buddy. Nice to see you really flying.

So now that you've gotten a taste of success, whats next?
Click to expand...
Good question. Honestly I don’t really know. I know that I need more practice and I’ll keep practicing every chance I get. Right now I am building the FT Mini Arrow as its supposed to be able to with stand wind better that the TT. I also want to try flying 4 channels and practice it throug the TT. My end goal is to be able to fly aerobatics with the FT Edge.

Any suggestions, recommendations as to what should be my move?

#119
Got a chance to look at the footage from the GoPro camera that I had strapped to my forehead. I decided not to edit this after all because I think that flying with a friend is funner than flying alone. Most of you will probably not understand what we are talking about but I think you too will enjoy to watch the event of me talking a friend while he is at work to tag along to film and feedback my practice session .


A few things learned about the GoPro camera I had strapped to my head. The camera should have been placed upside down so that the camera lens would be closer to the view of my eyes. This would help with two things:
1) The video would be right side up, and would have avoided me 2 hours of waiting for the video to save after I flipped it vertically.
2) The plane would have been closer to the center of the frame as opposed to the bottom of the frame.

#120
I think 4 channel would be a good place for you to grow into next. Having ailerons increases the responsiveness of your airplane. It allows you to level the wings much more rapidly, as you don't need to wait for the rudder to act on the wing dihedral. When flying in windy conditions this is especially helpful. Now that you have developed an eye for which control inputs to make when, and an understanding of keeping the nose into the wind, I would say that you are ready. Once you fly 4 channel you will wonder how you ever got airborne flying with only 3. Best of luck, as always.
You must log in or register to reply here.
Share: Facebook Twitter Google+ Reddit Pinterest Tumblr WhatsApp Email Link
Menu
Log in
Register