How would you design a cyclocopter?

#61
Scotto said:
How do you set up assymetric pitching?
Click to expand...
The pitching axis should be pitching crankshaft (calotte storage) with four pins bearing, turned off 90 deg. to the base. It should work like the crankshaft in the piston motor, but moving the pitching arms accordingly. In fact the 2jujube7’s present solution has a fixed pitching axis - however we have to make a geared axis later on to drive the SUAV.
Last edited: Aug 18, 2021

#62
I was having some trouble with the strength and durability of the 3D printed airfoils, so I came up with a process to make them out of XPS (pink) foam. Although the airfoil is many times weaker than a 3D printed one, its also 9ish times lighter. After doing some math, I calculated that it should be able to take the centrifugal forces. I'm not sure what the impact of the aerodynamic forces will be, but I've read that they are minor so I'm just ignoring them for now. I'm pretty sure that they'll bend a little, but it shouldn't be enough to significantly effect the thrust. If it does, I'll just throw in a pultruded carbon fiber tube as a spar. For those of you wondering, the airfoil shape is just cut out of the foam, then one side is covered in packing tape (the side on the outside of the rotation), and finally I'm gluing an end cap to the airfoil so that the bearings can screw in.

(Ignore the wrinkles on the airfoil from the tape being poorly applied, that airfoil was a test to see if the glue used to put on the end cap would melt the foam)

Here's what I'm thinking about for the basic setup. I'm just going to do a 2 rotor tethered hover at first, and after I get it flying sufficiently I'll start working on a 4 rotor untethered flight. 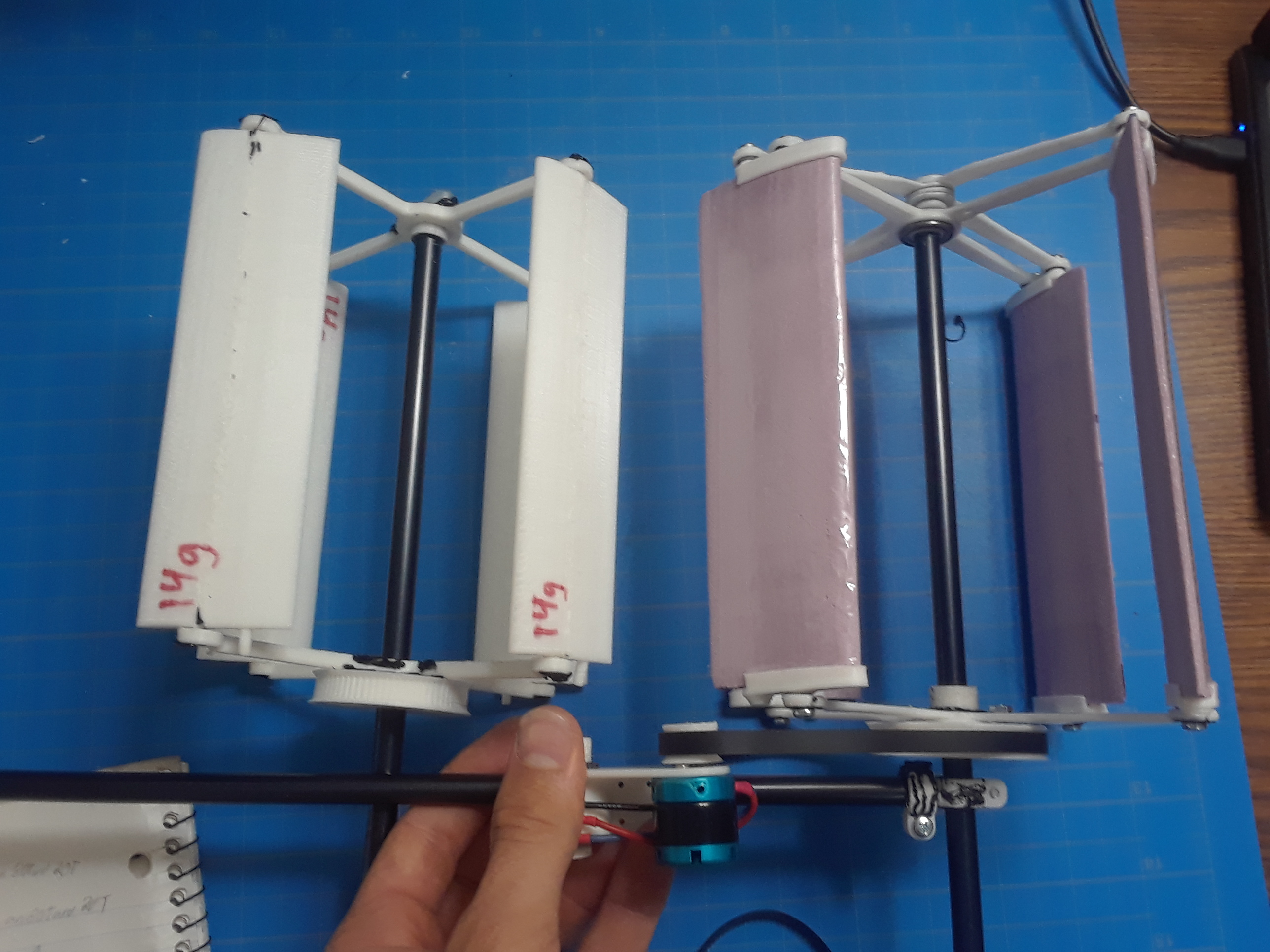 #64
Instead of tape, why not do a paper covering, your choice of adhesive? Would be stronger and less wrinkles, probably just a bit heavier.

#65
Piotrsko said:
Instead of tape, why not do a paper covering, your choice of adhesive? Would be stronger and less wrinkles, probably just a bit heavier.
Click to expand...
When spinning around, weight really matters because of the centrifugal forces. The tape works well at the current speeds/forces, is smooth, is easy to apply, and has a good strength to weight ratio. If I need more strength, I'd probably find a really light carbon fiber spar and stick it in somehow.

#66
This week I successfully reached 170g thrust with the cyclorotor after messing around with the transmission a little. For context, the whole setup weighs 131g so it has a sufficient T/W for me to start working on a cyclocopter. Plus, the 170g thrust test was not to failure, so there is probably still more thrust if I need it. I'm going to change around a few parts such as some vector attachments, but in general it's ready to hover. 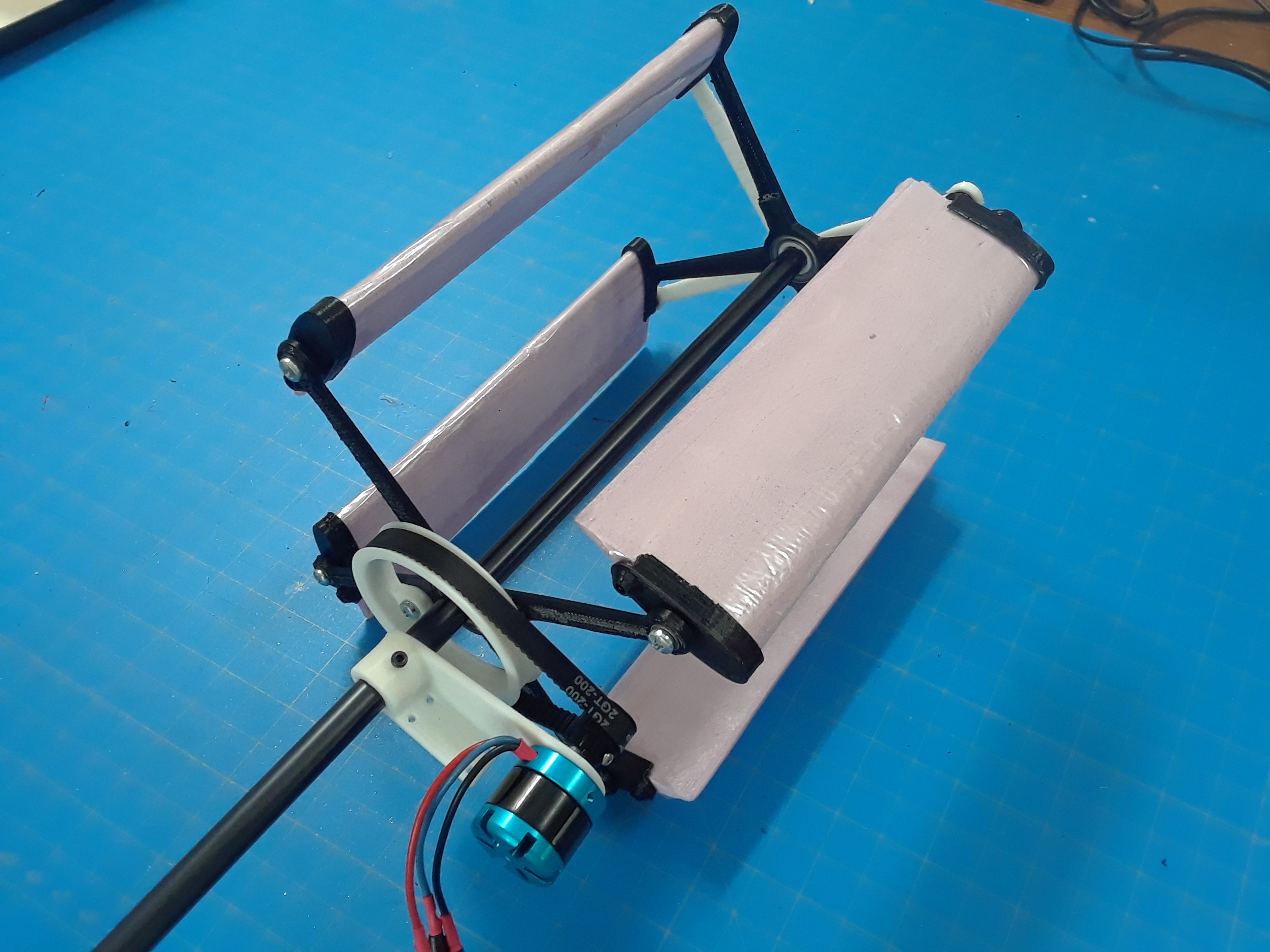 (This picture of the overall copter is a week or so old, it doesn't have the new idler and motor plate)

#67
Really curious how it sounds with the belt drive? Build is looking absolutely amazing

#68
Rcjetflyer2 said:
Really curious how it sounds with the belt drive? Build is looking absolutely amazing
Click to expand...
This is the video where I reached 170g thrust: The belt drive is a lot quieter than the gears I've used in the past; the gears didn't have any lubrication on them so they clattered a lot. The pulleys are fully 3d printed though, so they aren't the smoothest running.
Here's the Instagram where I've been posting videos: @cyclocopter.engineering

Working on a new idea. It should reduce airfoil bowing and let me run it at higher speeds, along with an increase in strength by making the vector links straighter

#70
If the airfoil is bowing, lack of rigidity is that issue. Other than unloading the center via the ends the added complexity probably won't gain you much. You were running carbon spars, right?

#71
Piotrsko said:
If the airfoil is bowing, lack of rigidity is that issue. Other than unloading the center via the ends the added complexity probably won't gain you much. You were running carbon spars, right?
Click to expand...
I'm using solid (XPS aka pink) foam airfoils right now. Although it's not strong at all, it only weighs 1g so the centrifugal forces don't bend it that much. I've been thinking about incorporating carbon spars, but it would make manufacturing more complex and I don't actually think I need it. The airfoil doesn't bow that much right now, I was just trying to develop a way to increase the strength for future bigger versions. I'll just cross that bridge when I come to it and probably put spars in.