#41
I am also a big fan of CK, great job so far!! i look forward to the final version. It really would be something to see several of those planes in the air for combat... very cool!
D

#42
localfiend said:
Make sure you have the latest 1.2 patch (some of the later game discs were already patched).

Then go here and download the csfix file. It's in the lower left hand side.

The above fix is pretty cool, makes a bunch of changes that eliminate crashes in newer operating systems. It also gives you an editable .ini file, so you can force the game to run at a higher resolution. I'm playing at 1920x1080. When you use the fix and change the resolution, the menus and mission briefing stay small, but the game itself is full screen and looks quite good for what it is.

Even dug my old joystick out of the attic, and it works great.
Click to expand...
Ha! I found this and it works great. My Saitek controller doesn't want to play yet, but I should be able to make the game think it is something old soon. I have found that I am terrible with the keyboard.

Plane looks sharp! I am looking forward to seeing how your canards work.

Mentor
#43
It sounds like somebody should set up a server so we can all play together.

Mentor
#44
AkimboGlueGuns said:
It sounds like somebody should set up a server so we can all play together.

Hint hint.
Click to expand...
Hah. Maybe this weekend. No time during the week.

#45
Any update on the rebuilt nose with the canards

Mentor
#46
Mac82 said:
Any update on the rebuilt nose with the canards
Click to expand...
New nose is built and ready to go, I've just got to get out and fly it. I think I'll get a chance later in the week. Gonna be busy the next couple of days.

Mentor
#47
Weather hasn't been cooperating, so I've been drawing up the rest of the decals. 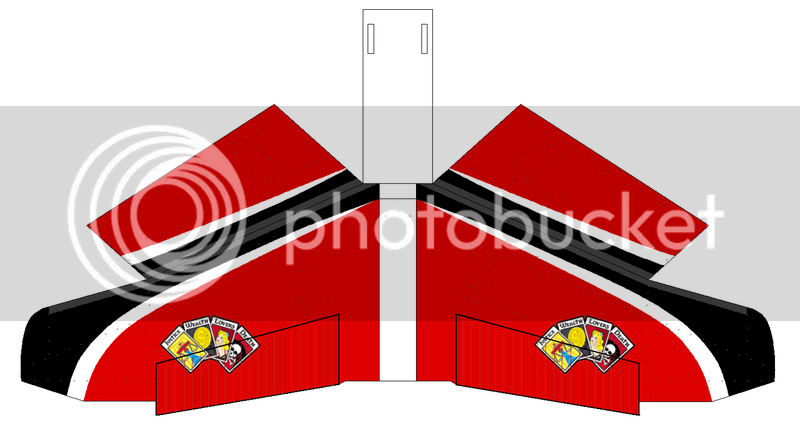 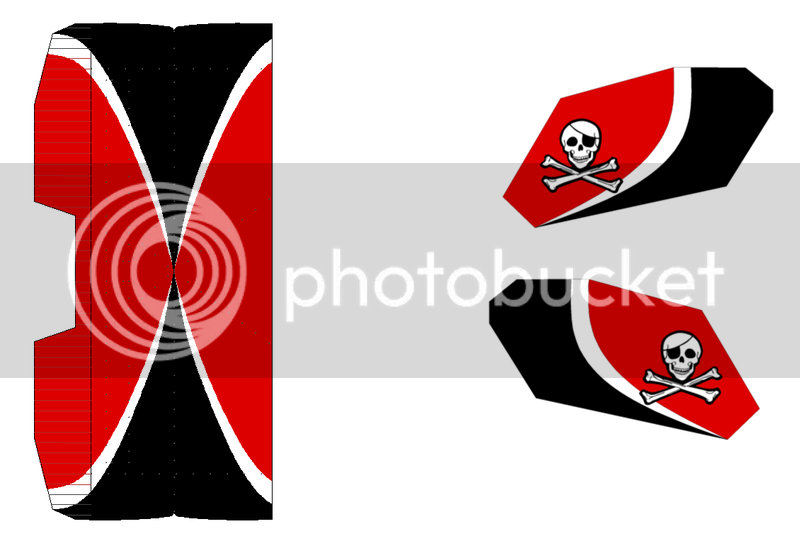 Thinking about a decal set for the slightly different MkII design from High Road to Revenge as well. 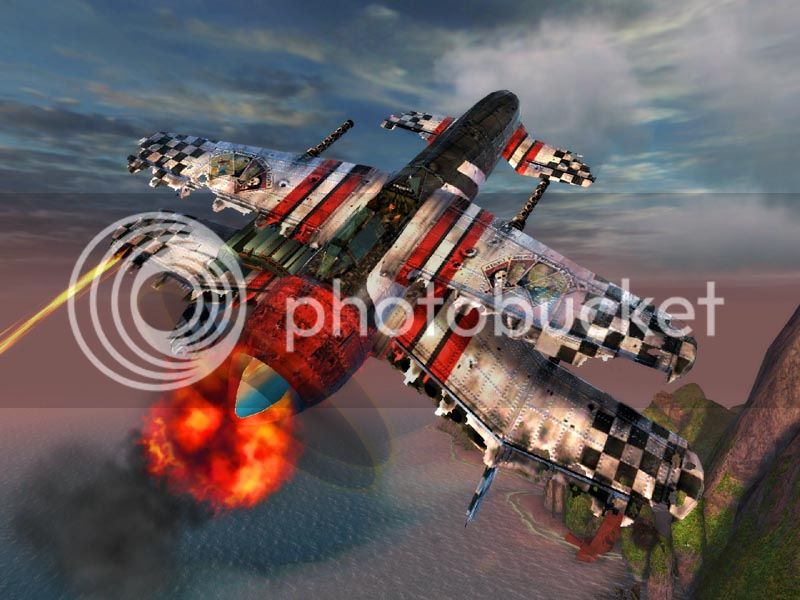 Mentor
#49
SP0NZ said:
That is looking AMAZING!
Click to expand...
Thanks, It seems it's easy to make an older computer 3D model look good. With the low poly counts the designers had to work with it's like it was made for foamboard.

It was a bit windy at the local RC field this morning, but I was tired of waiting. First couple tries resulted in nothing but really fast drives down the runway. It just wouldn't take off. Figured elevator was weak, and solved the takeoff issue by bending the rear landing gear forward so that the nose was raised up higher.

Before the flight I changed out my power pod. Figured it would be best to go lighter after the first couple failures so here's the new specs:

Moved CG back just a tad to the very leading edge of the top wing.

All in all, I'm very happy with how the plane handled. Elevator was weak, soo weak I couldn't do a loop, but that shouldn't be hard to fix. It was very stable, even at the low speeds I was flying. I think the undercamber wing tips and the airfoil on the canard really help out there.

Roll rate, even though I didn't do a bunch of rolls will be very high. Rates need to go down on the ailerons a bit.

I think I am going to cross post this on RCGroups. I need some more input on Canard functions and physics. I want to know if there is anything I can do to get a more responsive elevator without just making things bigger. I worry about having the rear wings stall before the canard, or other bad things could happen if I simply increase size.

Once I do some tweaking and get another couple flights in I'll be posting Beta plans for anyone interested.
D

#51
Watching this both here and in RCG.

Here's the RCGroups thread I started today if anyone wants to have a look. Getting some good info over there.

#53
Outstanding she flies ! I'll have to do one myself

Mentor
#54
Mac82 said:
Outstanding she flies ! I'll have to do one myself
Click to expand...
If further testing tomorrow goes well I'll post up the beta plans.

Mentor
#55
Well. The further tests today were both good and bad. Moving the CG back gained me more pitch authority but I ran out of room to move the battery and I think CG sill needs to be further rear.

I can probably put the battery under the wings themselves, or go to something smaller like a 1000-1300mah and see what happens. The plane will probably fly better with a lighter battery, but flight times would only be like 5-6 minutes.

Makes me wonder if I should scale the plane up a bit so that fitting a bigger battery won't be an issue.

Anyway here's the testing results. The end was as expected.


Here's how I found it after the crash.

Nose is a bit smooshed, but otherwise it handled the crash quite well. 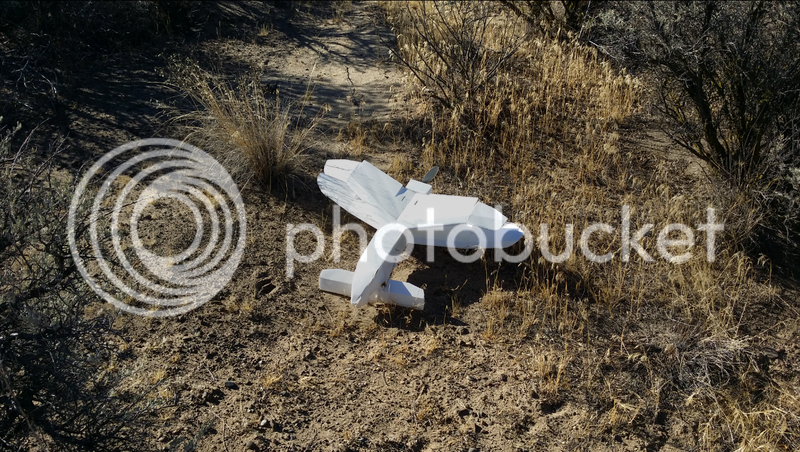 So, inverted at the moment is a no go, canard pushes it back over very quickly. This makes me thing the CG needs to move even more. These wings must provide more lift or something than I calculated.
Last edited: Sep 20, 2015

Mentor
#56
Getting stuff worked out over on RCGroups.

If you're interested in some of the physics and aerodynamics issues on canards check this thread out:

There's some good discussion going on about this Devastator starting halfway down the page.

Mentor
#57
Anyone have any input on size?

I think I'm going to make the next prototype with a 39.75" wingspan. That will let me keep the fuselage length in check and still able to fit on one sheet. Also, the plane will fit much better with the beef package and be able to carry a bigger battery with better flight times.

Should be very floaty at that size and will be easier to do zeppelin landings with.

I also plan to make the canard with a symmetrical airfoil and larger control surfaces. I think that will do a lot to fix the inverted issue.

Got to make this thing behave like it does in the game.

Mentor
#58
lol. Why don't you try making the canard a flying surface (the whole thing moves)? It would make it pretty effective.

#59
AkimboGlueGuns said:
lol. Why don't you try making the canard a flying surface (the whole thing moves)? It would make it pretty effective.
Click to expand...
Exactly what I was thinking
If you make the canard a full flying surface then your going to maintain a lot of controls.

And going to the 39.75 in span would be a good idea it wound make it a good size plane at that

Mentor
#60
AkimboGlueGuns said:
lol. Why don't you try making the canard a flying surface (the whole thing moves)? It would make it pretty effective.
Click to expand...
Thought about it. Dunno that it can be done simply and reliably with foam board. I'm gonna give the larger surfaces a shot. After a bunch of canard researching I discovered that my control surfaces were below average in relative size. I think once they're a bit bigger it'll just work without the full flying canard.

Made me remember another added benefit of the 40" wingspan. Should let me setup the dual rudders without a bunch of effort, and I'll be able to fit all the servos inside the wings. It'l make the build a lot cleaner.