After a failed bellyflop yesterday (I'm not posting the video, it's short and embarrassing), I patched it up and replaced the prop and had two full flights this morning!
Click to expand...
How do you fail a belly flop?
K

#282
Having read through this entire thread, several times. One area I know people have had trouble with is forming the canopy. I think I have something that will hopefully help simplify this task.

The following pictures show a jig I made laminating three pieces of 6" x 10" foamboard. The top layers are made by cutting out the profile of the canopy (found as a reference line on the canopy base), one should have a reduced profile about 1/4" smaller than the final profile; this will be your top layer. These are glued together then a bevel is applied to taper from the bottom of the bottom layer, to the top of the top layer. Once this is complete they are glued bottom side down onto the top of the last 6" x 10" piece of foam.
A hole is then made in the bottom plate that is about 1/4" smaller than the profile cut into the top plate.
Now you can access both the top of the canopy as well as the bottom.

To form the canopy, start by cutting a bevel in each side cut from the backside of the canopy, being careful not to cut the outside surface. Once that's complete, begin forming the shape of the canopy, bending the curves with your fingers. Take your time, this step will really determine how smooth your canopy will look once complete.
Now that your canopy is starting to take shape, it can be inserted into the jig. Play around with the fit until you are satisfied all the edges line up, then take a razor and cut little wedges in the bottom of the jig where the beveled joints of the canopy meet. You can also trim the hole in the bottom closer to the actual canopy edge. This is to help prevent gluing the canopy to the jig.
Apply a generous bead of hot-glue to each seam from the inside, one seam at a time, manipulating the edges as you go to make sure they are tight and aligned. Allow each joint to cool before proceeding to the next. Once you've glued all the seams, and are satisfied with your work, let the glue cool completely, then remove the canopy from the jig, finish the bottom edge with a razor and sand flat.

If all went well you should have a canopy that not only fits well but looks great!

#284
kvcaner said:
Lot's of progress yesterday. I managed to get the whole kit cut out!
I used the v8 plans for the templates and then numbered and labeled the parts per the Sponzified v7 plans. This helped immensely with understanding the build order and part function.

I have two questions however.

In the picture with the Horizontal Stabilizer, is this the correct location for what I believe are "doublers"? Do they go on the bottom of the stabilizer, or the top?

In the last picture, I can't figure out what these parts are for, and where they go.

Best Regards,
Kvcaner
Click to expand...
Anybody recognize these mystery pieces in post #280? I don't want to get to far into the build without knowing what the parts in the last picture are for. They were an addition in plan revision v8 as there isn't a corresponding part in plan version v7.

Thanks in advance for your help!

Mentor
#285
kvcaner said:
Anybody recognize these mystery pieces in post #280? I don't want to get to far into the build without knowing what the parts in the last picture are for. They were an addition in plan revision v8 as there isn't a corresponding part in plan version v7.

Thanks in advance for your help!

Regards,
Kvcaner
Click to expand...
Those mystery pieces are the forward ends of the nacelles. The nacelles used to be one piece for each side, but they were very difficult to shape and glue on that way, so I split them into three pieces.
K

#286
Ah okay I see, makes sense now. Was I right about the other parts being doublers for the horizontal stabilizer?

Mentor
#287
kvcaner said:
Ah okay I see, makes sense now. Was I right about the other parts being doublers for the horizontal stabilizer?
Click to expand...
They are doublers, and they are related to the horizontal stab, but they actually go UNDER the H-stab and double (or triple) up the root of the VERTICAL stab, reinforcing the base where the vertical joins to the aft-fuselage. Pointy-end forward.
K

#288
Ah, Okay, perfect! The fan should arrive today or tomorrow, then I can start assembly in earnest!
Thanks again,

#289
Well I got it nearly complete over the weekend. Just a few details to button things up, then she's ready for some paint!

All that's left is completing the tail and attaching it to the fuselage, come to a final arrangement of components in the cockpit, and figure out how to provide cooling for the ESC.

I'm waiting for the actual battery to arrive tomorrow that will be used in flight, but I had a 4S 6000 Turnigy battery (30c rated, actual is about 19c based on current resistance), so I decided to do a full power on test to measure the max thrust.
I set my scale on the floor and measured the AUW of the aircraft with the battery and without. Without it weighs 740 g, with the battery it weighs 1305 g. Being only the second airframe built using these techniques, I think I could use quite a bit less hot glue I think I could probably shave off 100-150 g.

With the aircraft nose down on the scale I tared the scale and punched full throttle. I repeated this again then retrieved the data from the Phoenix Edge ESC.

Hold the press, NEWS FLASH, the battery was just delivered a day early to my front door! Putting it on the charger right now! Good news is the battery saves about 35 g off the AUW, bad news is it's 1000 MAh smaller Looks like 3.5 to 4 minute flight times on average. Perhaps the motor will break in and draw a bit less current in flight?

Anyway I have two questions, then I think I'm done:

1) I know the ESC is intended to go in the cockpit area, but I am wondering how or if you provided any cooling for it?

2) I see that the battery slides under the shelf in the cockpit and rests between the wings, but I'm wondering how you secured the battery? Straps? I was thinking of BBQ skewers in front and behind the battery?

Here's a picture as she appears now.

The battery slides down pretty much as far back as it'll go usually, and I usually have a little bit of velcro just to keep it from sliding forward. It wedges in there pretty tightly.

The ESC is actually intended to go in one of the inlet sidewalls just inside the inlet. There should be some pictures of this earlier in the thread. I used to just leave it in the nose-section, but it overheated REALLY easily.
K

#291
Mid7night said:
Alright, that was easy! I had the latest version done, it's just not been "SP0NZ formatted" yet. I'll update the first post again when he has time to work the plans over.

In the meantime, you can download the latest plans from the first post. Look for the files labeled "XF_A-4_EDF_v8_..."

1. Increased exhaust area (more thrust)
2. Two-Piece Tabbed-and-Slotted Nacelles for easier assembly
Click to expand...
They're actually Three-Piece Nacelles! That's what had me confused when I couldn't figure out what the extra pieces were🙂
K

#292
Finished the cockpit layout, installed the battery and ESC as per your suggestion. 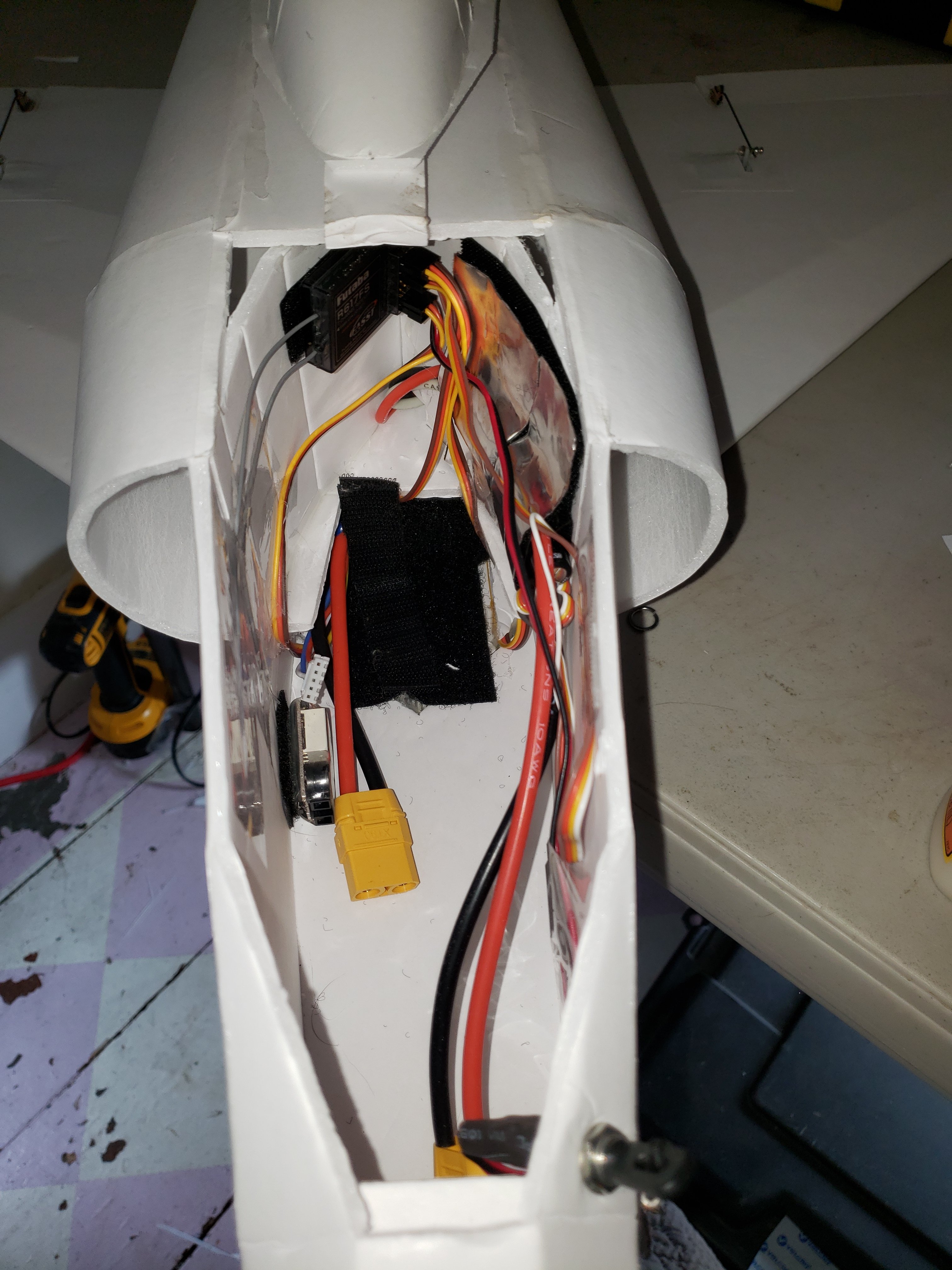 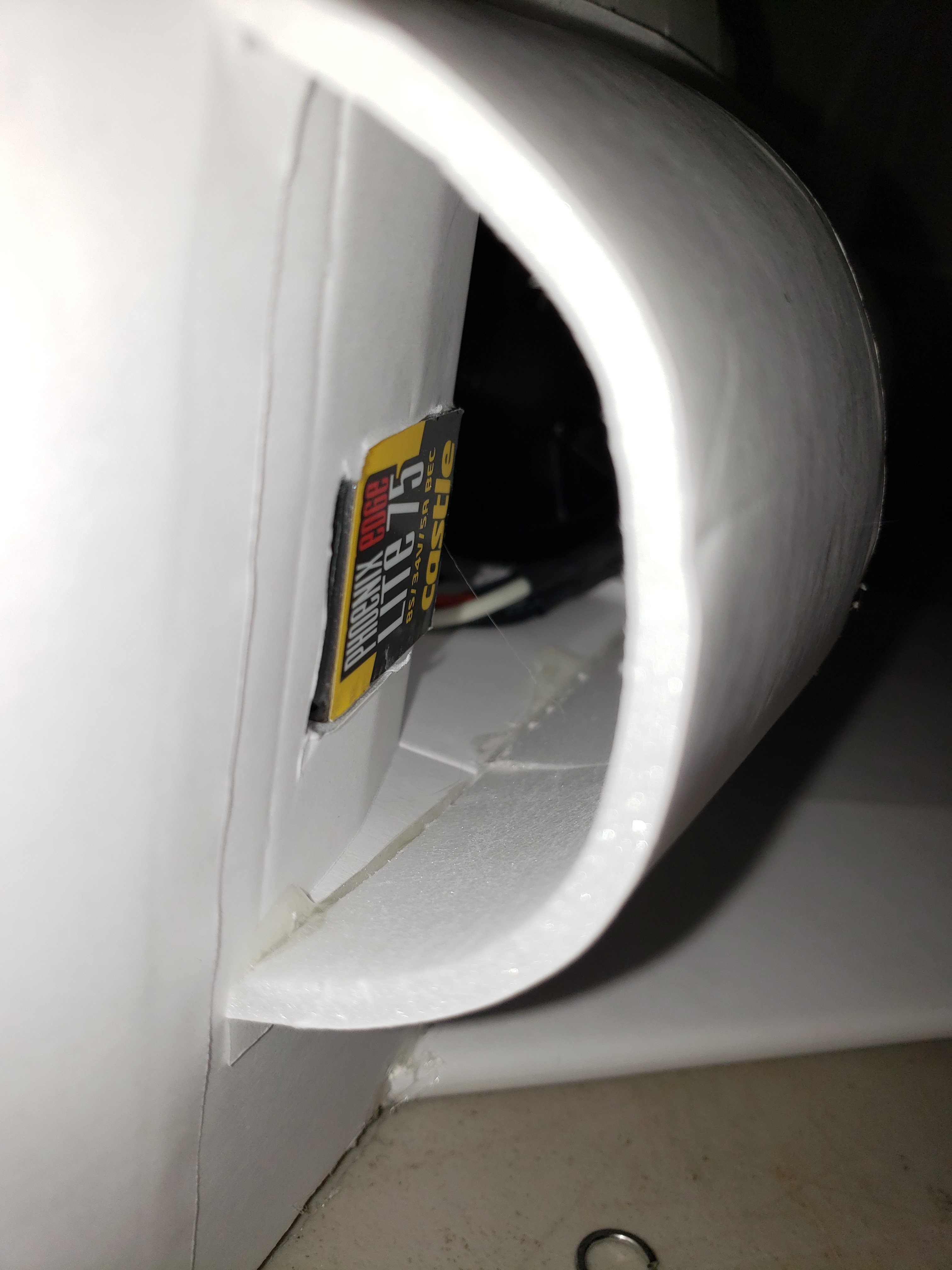 #293
Any recommendations on grip placement and throw style for launch?

Also I'm having trouble confirming control throws. For some reason I have 12 degrees stuck in my head. Is that correct for high rates? What about low rates and exponential (30%?)?

Mentor
#294
kvcaner said:
Any recommendations on grip placement and throw style for launch?

Also I'm having trouble confirming control throws. For some reason I have 12 degrees stuck in my head. Is that correct for high rates? What about low rates and exponential (30%?)?
Click to expand...
I prefer the "pancake baseball", as seen here:


12 degrees sounds ok for standard throws, but I like to give myself more and then set up a dual-rate switch so I can cut it back if necessary. Better to have more control available than you need, than to need it and not have it.

Expo is a bit of a "season to taste" situation. 30% expo is pretty 'normal', but I personally like 50-70% even depending on the application. YMMV.
K

#295
Paint and decals are officially done! 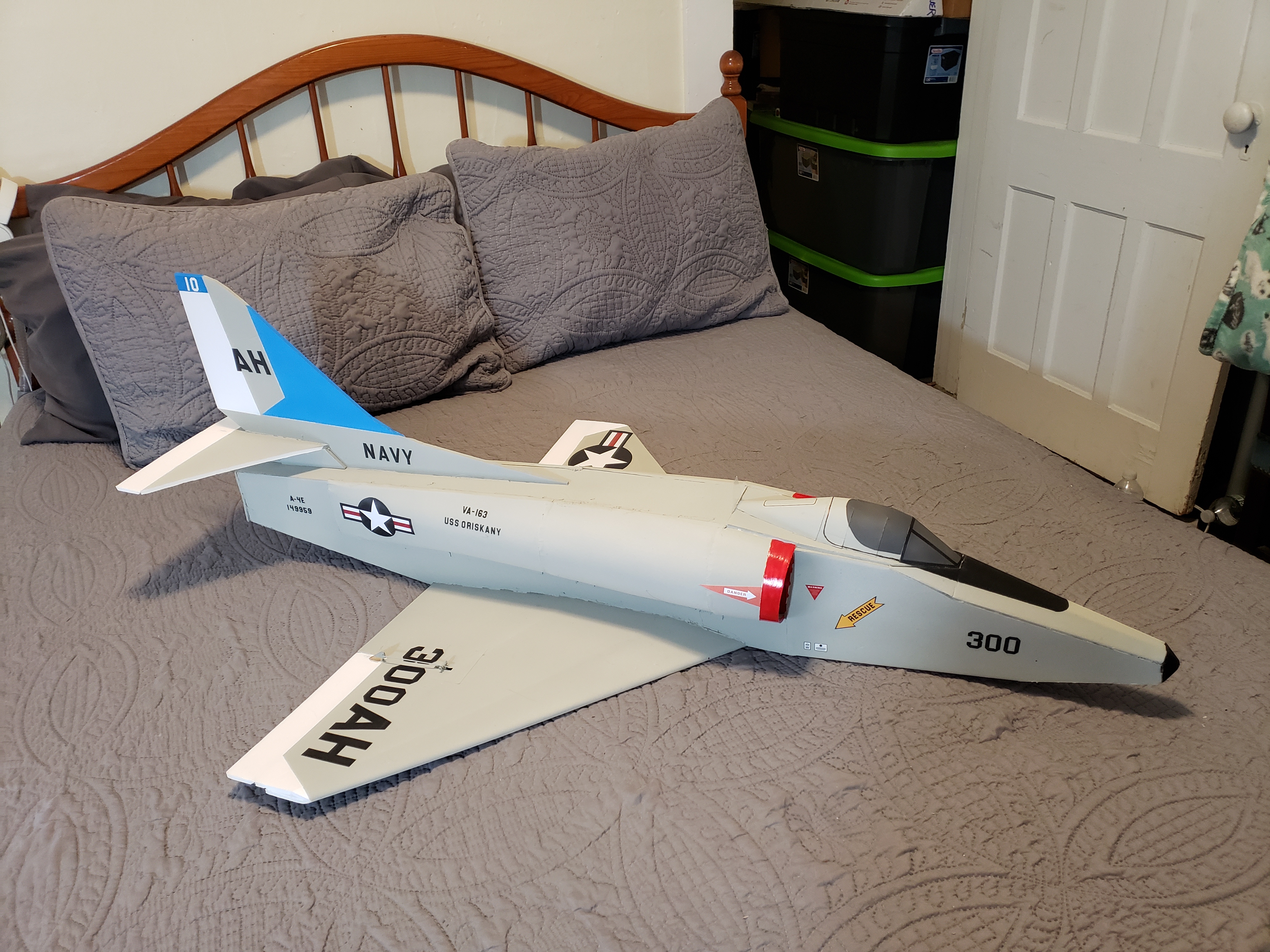 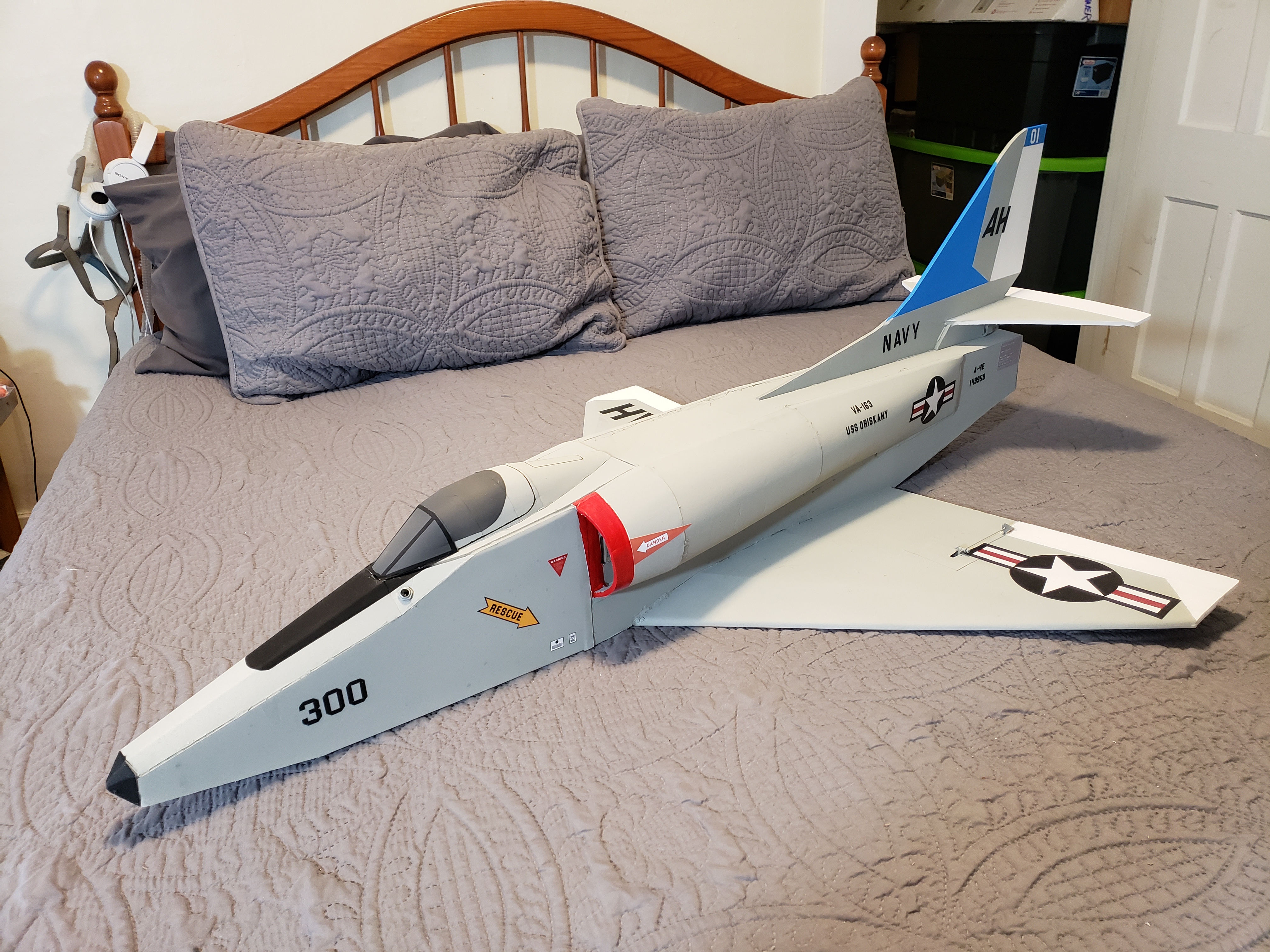 Paint was airbrushed with craft paint. Keeps the paint lite. Markings are mostly color laser print hand cut and applied with 3M77. The smaller numbers and letters were CNC cut on my wife's Cricut scrapbooking cutter. 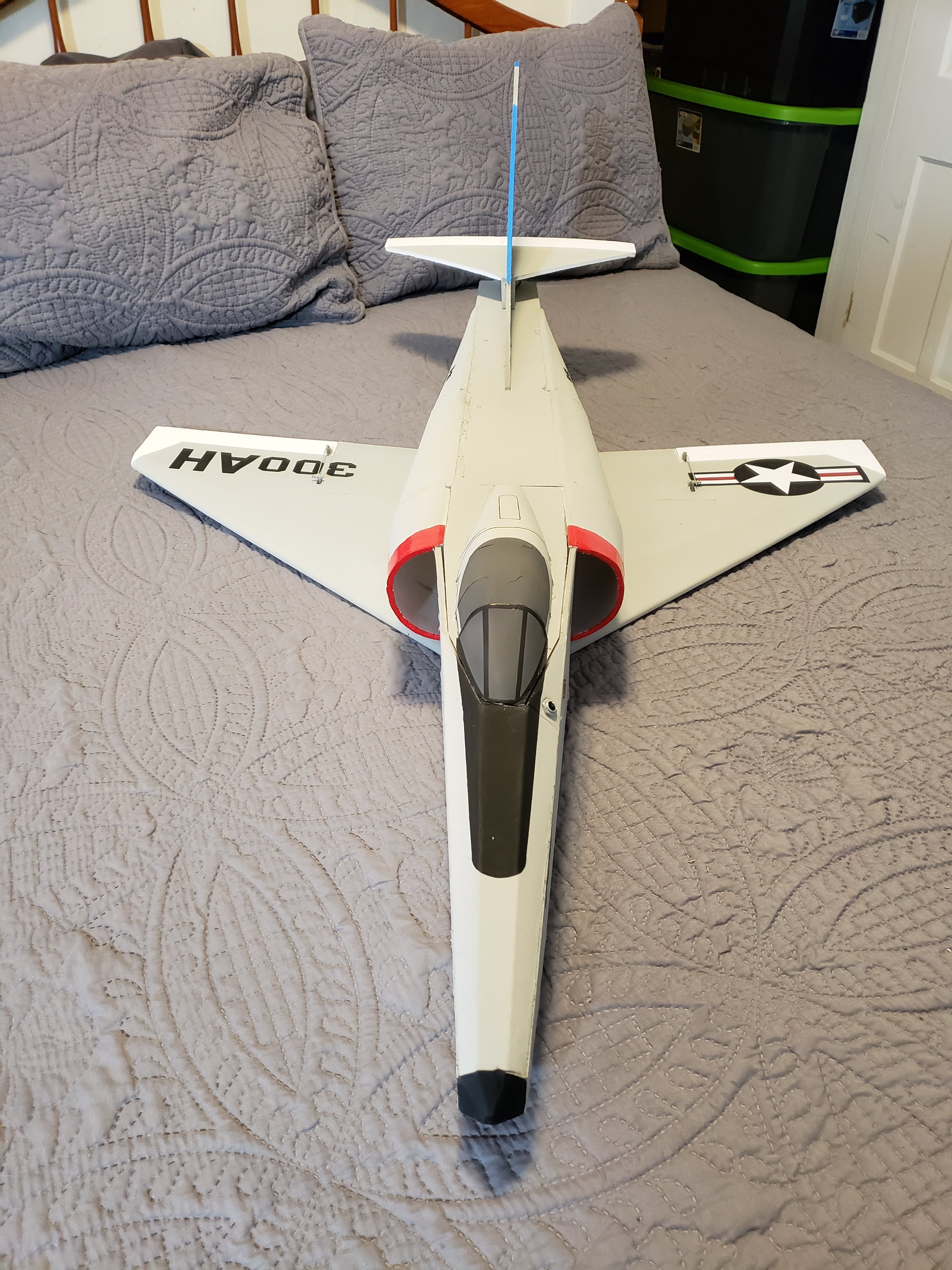 There's a bit of a warp (anhedral) in the horizontal stabilizer I'm going to try to work out by misting the top surface with some alcohol using my airbrush.

Paint/Markings added 42g for an all up final weight of 782g w/o battery, 1,347g with the battery ready to fly. A bit heavier than I would like, but she should fly!

Unfortunately my TX is out having all the digital trim switches replaced, so I'm not sure when I'll get to maiden her.

Thanks Ben for a great design!
K

#297
Hey Ben, does FT plan to release you Cessna Commuter in the scale you built it as "Big Al's Cessna", or just as the mini? Even better, do you plan to release plans?

Mentor
#298
OMG that's FRIGGIN' AMAZBALLZ!! That looks absolutely stunning! I would feel vain telling someone I designed that plane, you did a really great job on the build and finish. Can't wait to see the maiden!

There are rumblings of a larger incarnation, maybe not quite as large as my 72" version, but I can't say much more than that.
K

#299
Guess I'll just have to wait for the sponzified plans then!
K