#61
Wow what a thread. Wish I had more time tonight to digest this read.

#64
jpot1 said:
@james90755 - yes this is a keeper for my hangar. Going to add some more color to it and hopefully try 4s if I ever get a break in the weather. Let me know if you want the 150% plans. I resized and adjusted the A/B folds.
Click to expand...
You would share 150% plans. How cool is that! Please. All I have to trade is 186% Simple Cub without adjusted folds. Still don’t know how to do that yet. I prefer sketchup, and am learning Inkscape (MAC guy). What do you use?

#65
@james90755 - not a problem - its what FT is all about. I use inkscape to scale and resize. Lately if I am designing something new, I will use sketchup first and then unfold it and download to inkscape to finalize score cuts / A/B folds etc.

Keep in mind the fuse is longer than one sheet of foam so you will need to splice.

#66
jpot1 said:
@james90755 - not a problem - its what FT is all about. I use inkscape to scale and resize. Lately if I am designing something new, I will use sketchup first and then unfold it and download to inkscape to finalize score cuts / A/B folds etc.

Keep in mind the fuse is longer than one sheet of foam so you will need to splice.
Click to expand...
Appears one wing half isn't there. since they're symmetrical I can just cut and score from the other side. Thx.
J

#67
Huh, just read up on the unfold tool in sketchup. Now that's something worth knowing... never thunk something like that even existed.

#68
I just do one wing half on the plans to save printing / taping sheets of paper. Just use the one side as a template for the second and make sure to flip it over!

My immediate thought is how to maximize speed with 4s1800 and 2218 Radial C pack style motor or the slightly larger Emax GT2815 1000kv. 100% build, or 1xx%?
Click to expand...
Throw an 8x8 prop on that and you should be able to get some pretty good speed. I'm sure there's more to be had with a couple ecalc runs, but that's probably good enough to be fun.
J

#70
Maidened my 150% plane Saturday. Friday night I was finished less the soldering work of 4mm bullets to get a 2815 on it, so I threw on a radial C pack motor and took it to the field.

Boy does this thing track upward at speed. And I had a hard time getting in to keep from tracking in the roll axis. I shimmed the motor with a moderate amount of down and right, and things improved. I think more shim is likely necessary. I am curious what anyones experience has been to get motor shim correct?

Sure looked smooth in the air, and comparing this plane to my P40 is a good bit faster. Thinner wing, generally less drag. Expected. It was a good exercise in observing how changes in plane design effect things when power plant is the constant.

Now I have a week to get my Emax GT2815 in there before the next trip to the field, and come up with my gameplan to true the plane. I really want to figure out a way to load the battery without removing the wing. That's a PITA.

Enjoying the design.... thanks for sharing.
J

#71
Last week I was out with an Emax GT2815 1100kv and a 12x6 prop. Two popsicle stick thickness of down and right motor shim and it calmed way down and flew like it was on rails. And fast. Yanked and banked at high throttle no problem. Pretty cool plane.

Maybe I take a little of the wing tips, rudder, and elevator and see if she gets faster?
Last edited: Jan 27, 2020
J

#72
Last weekend took this one to the field, after taking 2.5" off each wing, and 1" off each side of the elevator. Mike at the field produced a SKYRC 015 GPS speed recorder... which registered 93 MPH.

#73
i built a mini-deamon a few weeks ago and it is quickly becoming my new favorite. so much so that i also ordered a micro-deamon to keep it company.

this was my first real balsa build and i made a few mistakes but nothing that could not be fixed. i messed up the front and put the air vent on the bottom not the top. duh....

at the end i can up almost 100g lighter than the 250g target. plane flies like it is on rails and is almost silent as it races by. according to ecalc it will do 82+ mph and by the looks of it they are pretty close. it is not my fastest plane but due to the size it sure is one of the funnest. 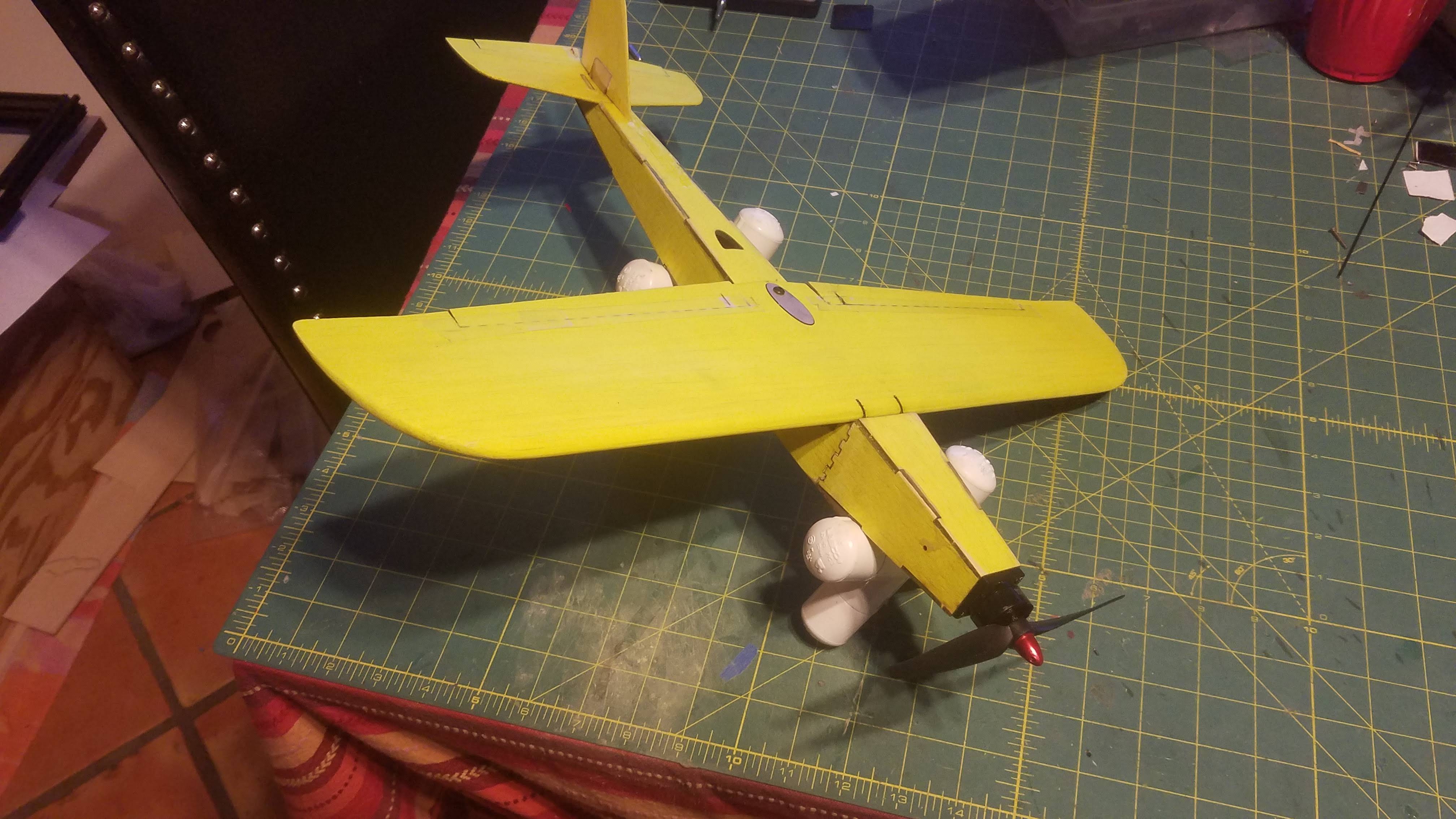 still waiting on the motor and servos for the micro but as soon as i get them, it is next on the list.

#75
Tronglodon said:
Well I don't know anything about flying that fast, but that's a good looking airplane. I wonder if it would slope soar.
Click to expand...
Of course it will slope, just not as fast.

Nice looking plane. Any possibility of creasing in front of the spar, pushing the top skin back 1/4 inch and making it semi symmetrical?

Mentor
#77
mrjdstewart said:
micro is gonna be 4S.
Click to expand...
Oh yeah! You should try the mini on 4s though...

#79
Start with 3s on your micro. Trust me, It'll be plenty for the beginning! My 3s setup does about 110. Getting 4s into the current fuselage is doable, but you will have to be careful and plan your electronic setup to get room. You'll probably have to use two 2 cells in series so you can space them out. A 6s version is in the works, which should be good for about 150 (On a 14 inch airplane!!!), assuming we can find a motor that won't burn up.
The micro deamon is my favorite airplane to fly right now, the speed is addicting!
Ross.
J