#1
So I have delved into the wonderful world of 3d printing and besides making my ft planes looking more scale I was excited to be printing full planes too.
My first one had to be something a little different. And I figured a rotating wing slope soarer fit the bill quite nicely.
It tool a while to get settings right and get the lw pla to play nice. And I got them to an acceptable level, still comes with lots of sanding but I'm ok with that

V1 had some bugs, like me making a mistake and adding extra infil to the right wing by accident.
And the hole for the spar only went halfway through the second section.
But it was good enough to maiden.
And it went quite well at first. I rushed out yesterday to take advantage of a west wind. Warmed up with another cheapo foamy for 5 min and the wind was doing its up thing. So I sent up the nexus. It just lifted out of my fingers and before I knew it she was 40 ft up next to a few hawks floating effortlessly. After a few decent long grass landings I bumped it off the walkway pretty hard and dented the nose, not much damage thankfully. Went to go for another flight and gave it a toss. It picked up, hung in the air for about 20 seconds and started to roll right(one wing was heavier than the other haha). I realized I had zero control over it at this point as it swung around and smashed Into the bike path. finishing off the nose cone and snapping the tail at the thin spot. Oops


SO, what did I learn 1. Make sure your transmitter is on....
2. The throws were not enough
3. The wings were super floppy and heavier than needed(I knew this was going to happen) any time it would pick up speed they would flail about like one of those wacky inflatable dudes.
4. the tail needs to be beefed up


So what's changed since then?


1.First attempt at the wings were unbalanced on the infil and the spar didnt go all the way to the tip. I'd already foreseen this so I had already printed new wings with 3% nfill grid on the tips and zero in the other 2 parts. But extended the tube for the spar right to the tip. And got a solid 3mm carbon rod to put in. So they're lighter and much much stiffer. There is zero wobble left. 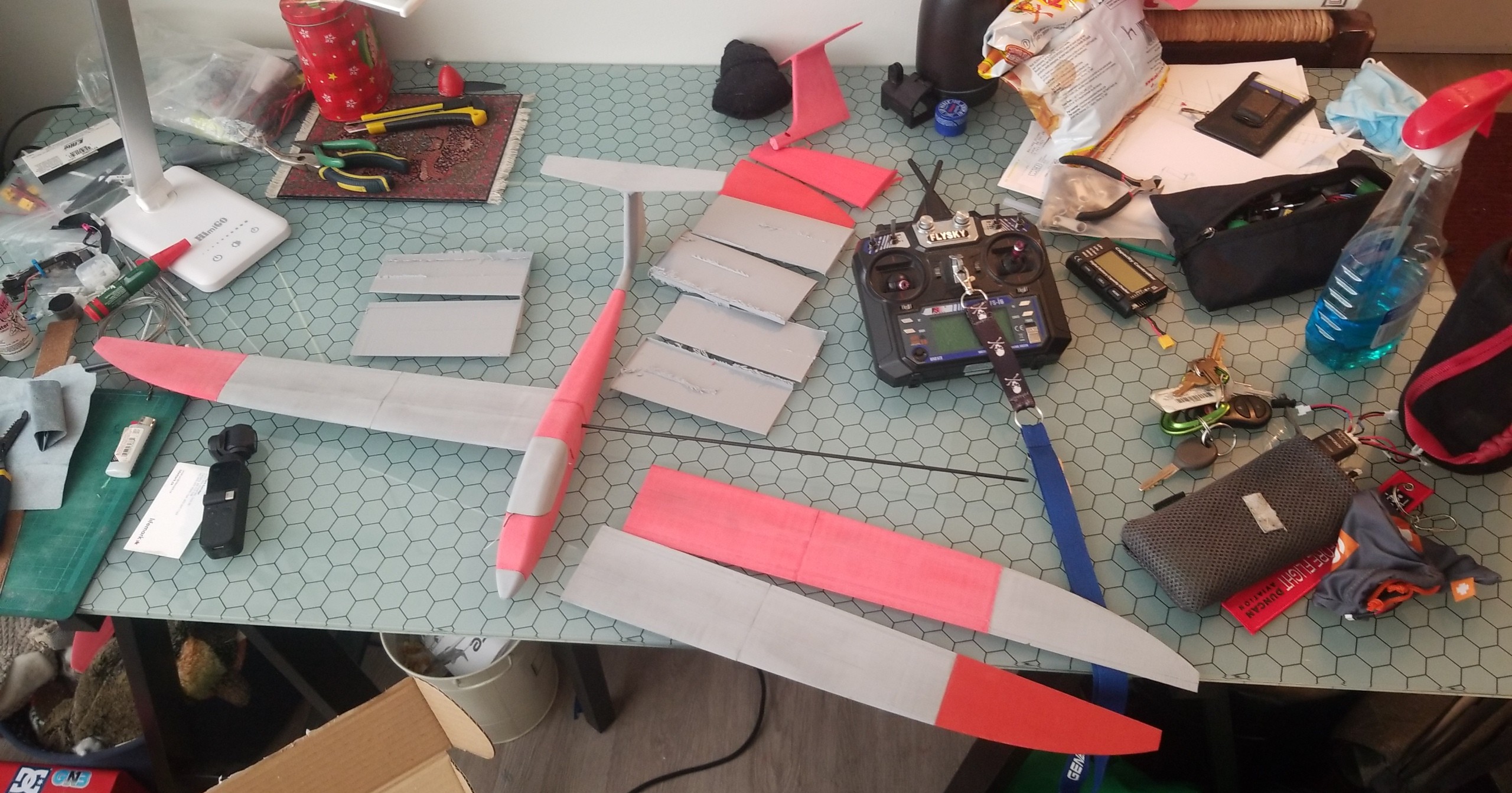 2. I put the servos to 120% travel and I added another hole to the control horn. So now it uses 90% of the available travel room before it was maybe getting 60%


3. I reprinted the tail section horozomtal to take advantage of the layer direction and added extra top and bottom layers and upped the infil 2 %. I'll do this to the mid body next time. As I see that being the next weak spot.

overall I think I stayed about neutral on weight since the wings lost a bunch and the tail and nose gained some infil. Much stiffer wing and more throw on the roto wing should make this thing perfect. And as for paint I went with red paint over the pink plastic, dark silver over grey and a black canopy. Should really pop in the sun. Sparkle sparkle.