#1
Hi all
I'm on my lunch break ATM punching away at my iPhone and thought that I would start my tricopter thread.

Dave has been a major inspiration to me as I have followed his builds closely and I have also learnt a lot from Matt Hall from simplecopter.
Unfortunately I didn't pay close attention to the electronics that blokes are using and I went ahead and randomly picked components based on total lifting capability not efficiency.
Also I was inspired by HK's beer lift competition...

For the props I wanted to start small for the motor's and get it dialed in before I go wild and upsize so I started off running 13x6.5 GWS.
The yaw mech I used is Dave's design made out of the steerable nose wheel assembly which worked unreal I love it.
I also went a little over board with my fpv setup as I pulled my eagletree out of my radian pro and installed it on the tri, I also run a Chinese 500mW 5.8Ghz TX and small 480p cam.
Total weight without the lipo was 1.6kg so it is a real fatty, for my sets flight I used the stock pids on V1.6 KK2 firmware and I did notice that the servo would not return to centre after yaw. I tested the servo and it test ok so the problem is in the kk2 board.
Nothing I did would get the servo to re centre correctly after yaw input :-(
Also the vibration from the motors was effecting the servo causing jitter which I could not eliminate.
On my test flight I flew for a total of 10:50 and watching the playback from my keychain cam it shows a lot of vibration at certain rpm( I did balance props but not the motors)

Lesson learnt
Cut out some weight and keep electronics simple....

I was not entirely happy with the flight time running such a large battery, I also measured current draw with a turnigy 130a watt meter and WOT drew 110A,hover on about 55A with 50% stick.
I will post my pics when I get to a PC this week end

#2
Now I have mostly taken this tri apart and pinched the yaw mech and kk2 for my MK2 build but all is not lost for the motors and esc's as I plan to build a floating box tri inspired by jake wells. I love fishing and figure why not be a total nerd and fish with a floating trycopter. "Build number 3"
Last edited: Aug 16, 2013
V

#3
I did not take many pics of the mk1 build

this is the basic frame 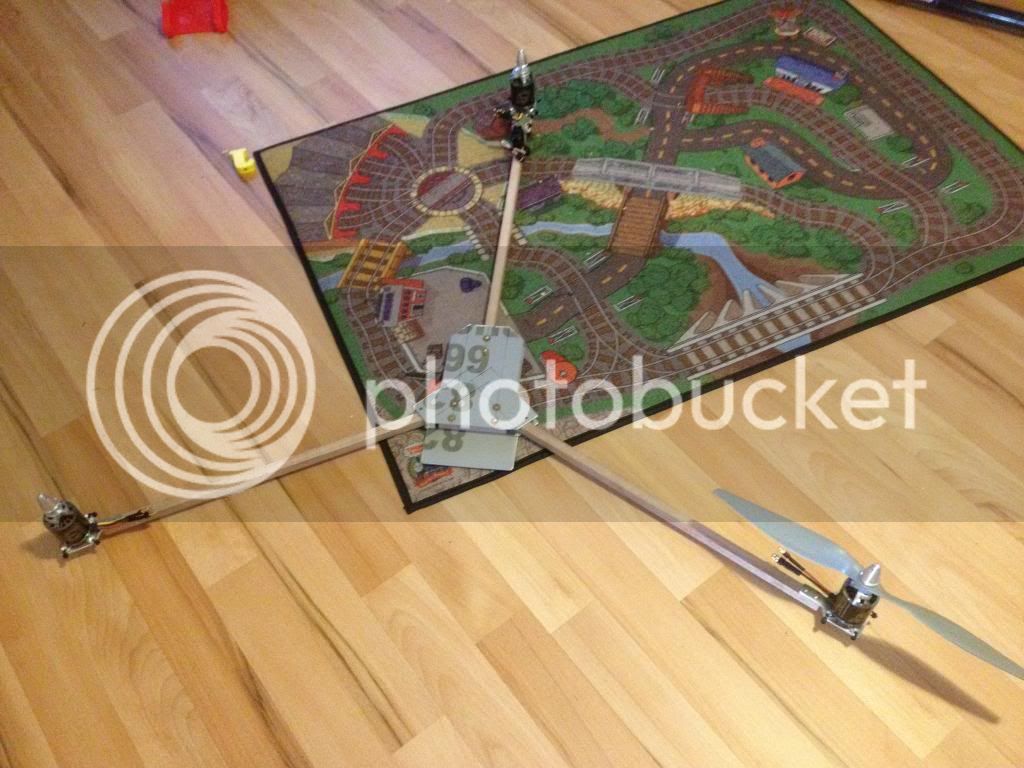 this is the Body with KK2 mounted, the body was made from 2mm alloy plate taken from an old sign 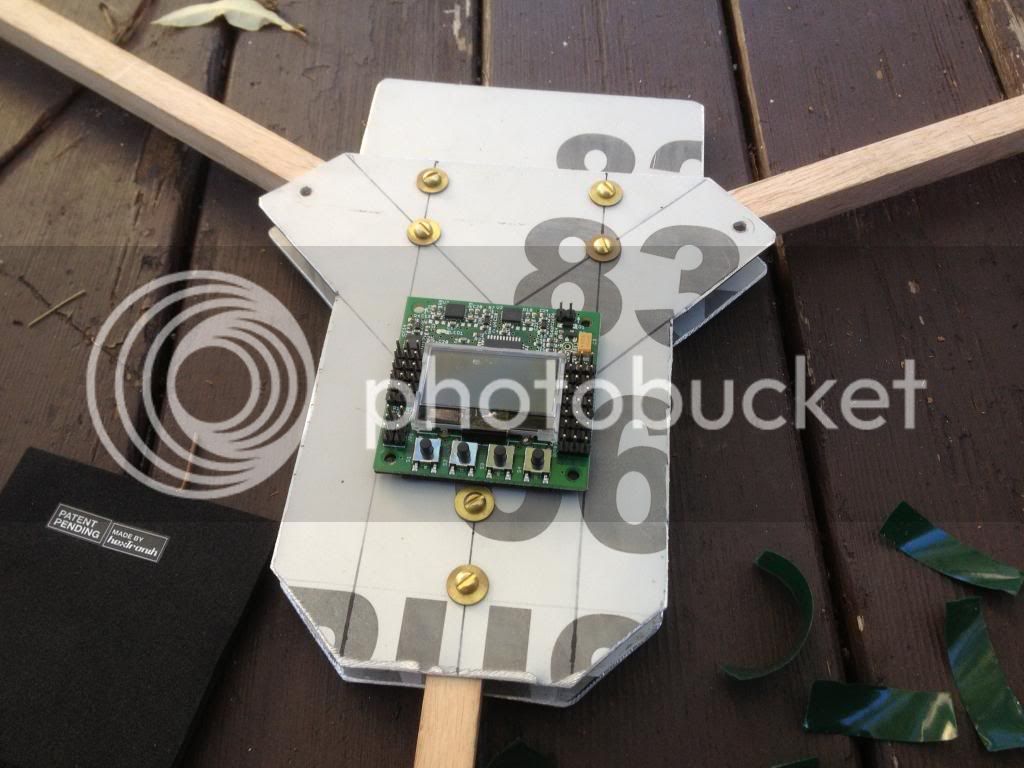 this was taken when I was mounting the eagletree OSD 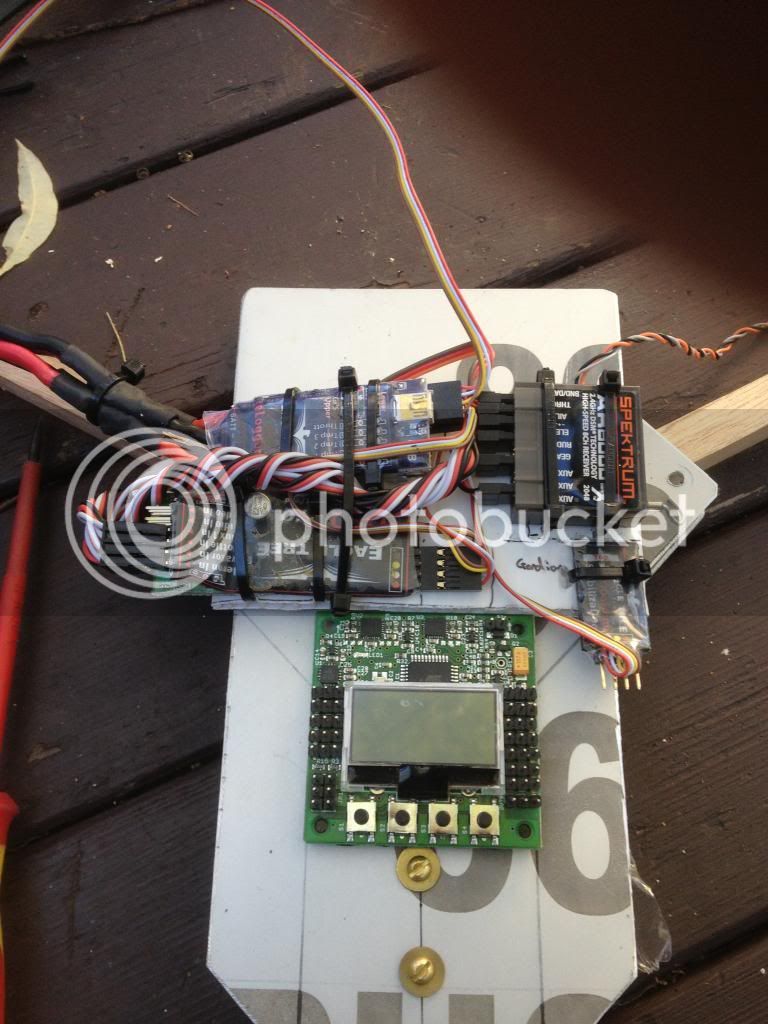 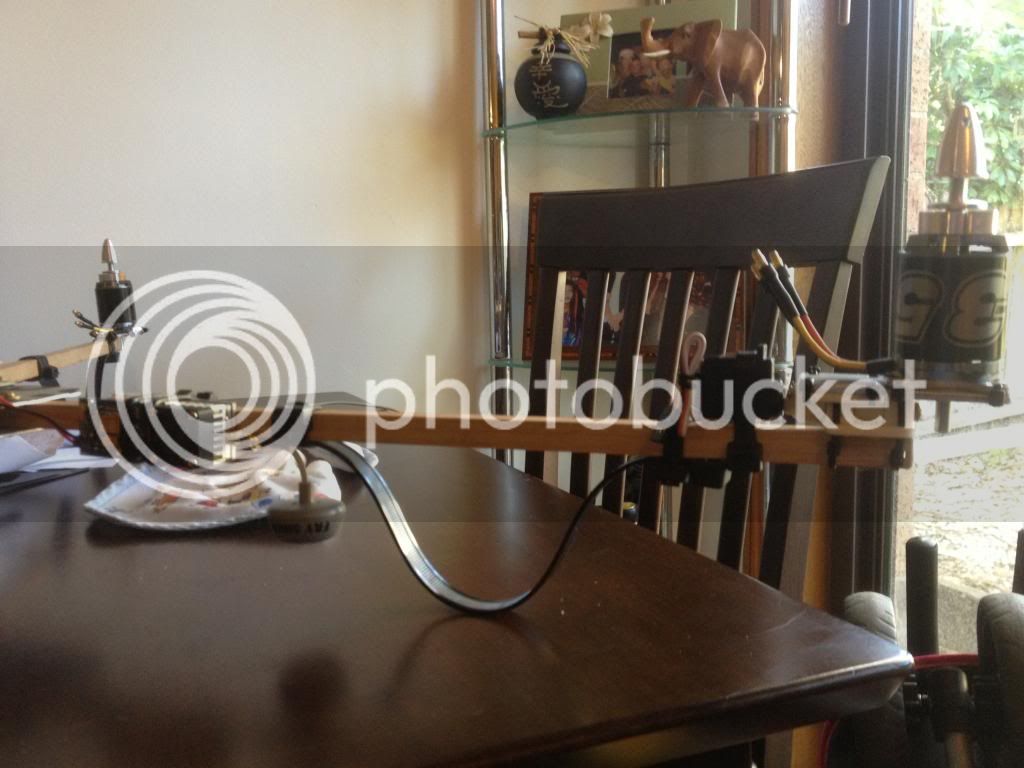 this is taken when most of the gear was mounted 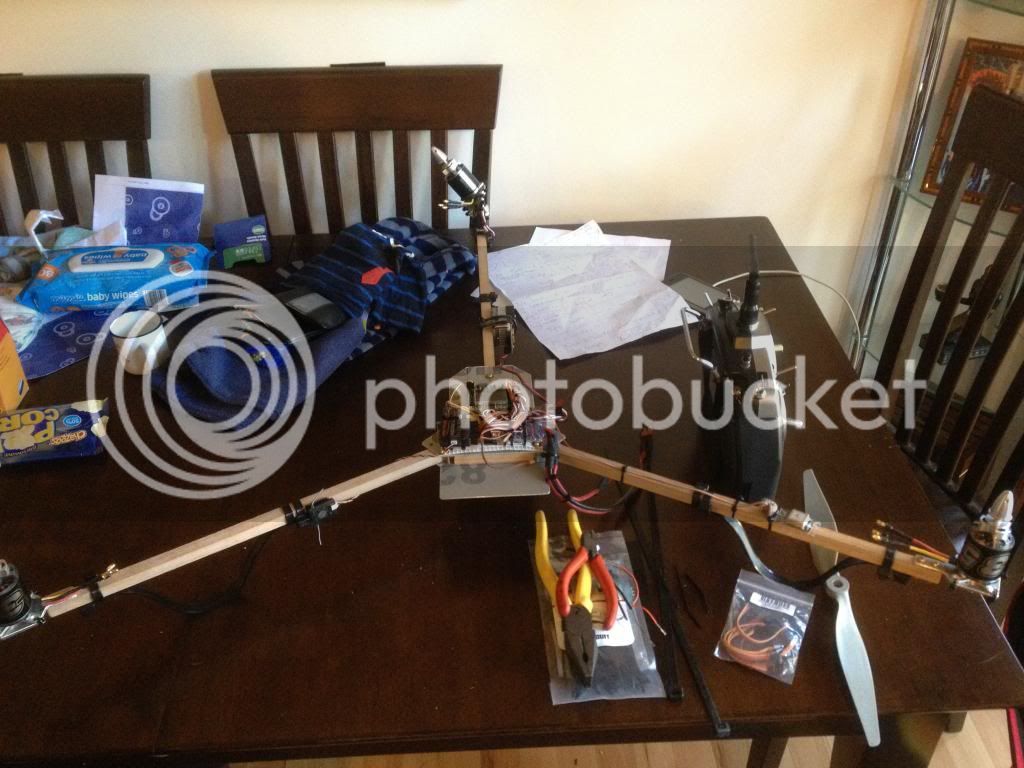 #4
as you can see it was a rather big heavy built, unhappy with the result I have now stripped it down and have a new plan for the mk1, i am looking forward to morphing this into "fishing copter"
Last edited: Aug 19, 2013
V

the following pics where taken at different stages of the build 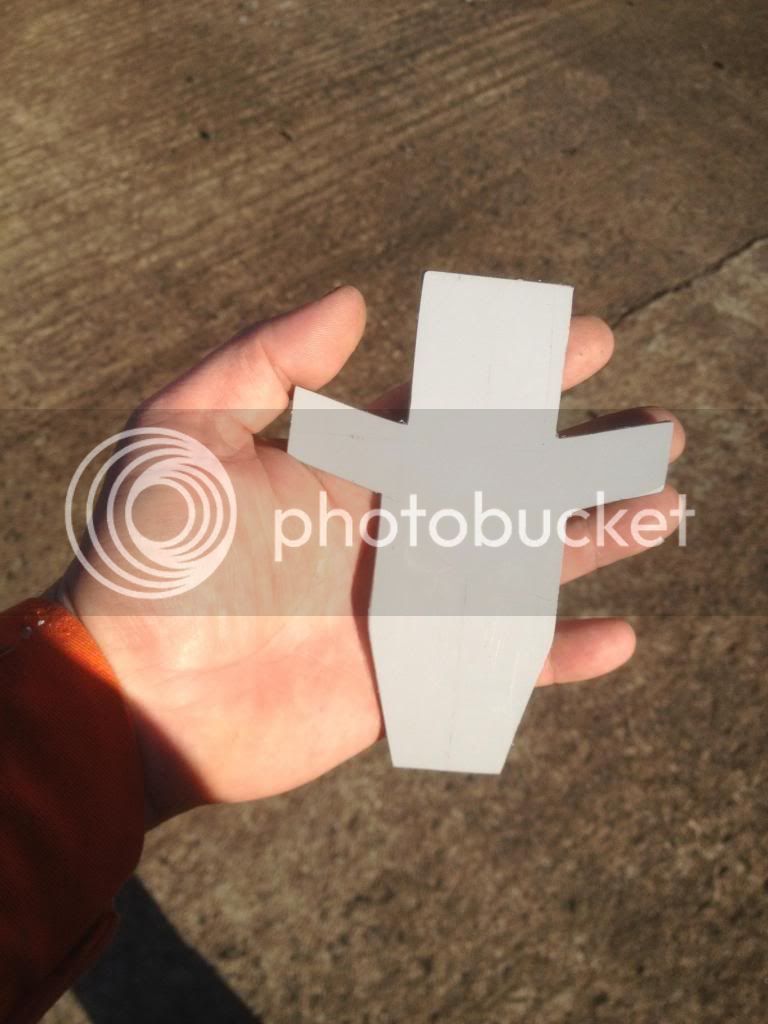 I pinched the yaw mech from the MK1 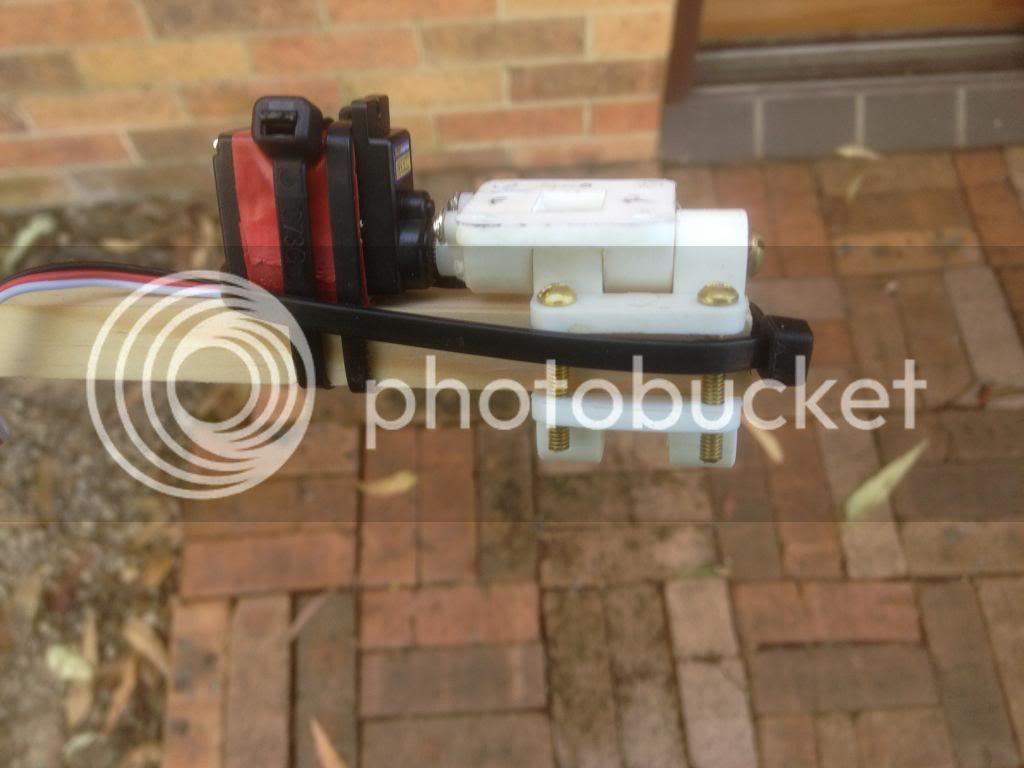 this is the size difference from mk1 and mk2 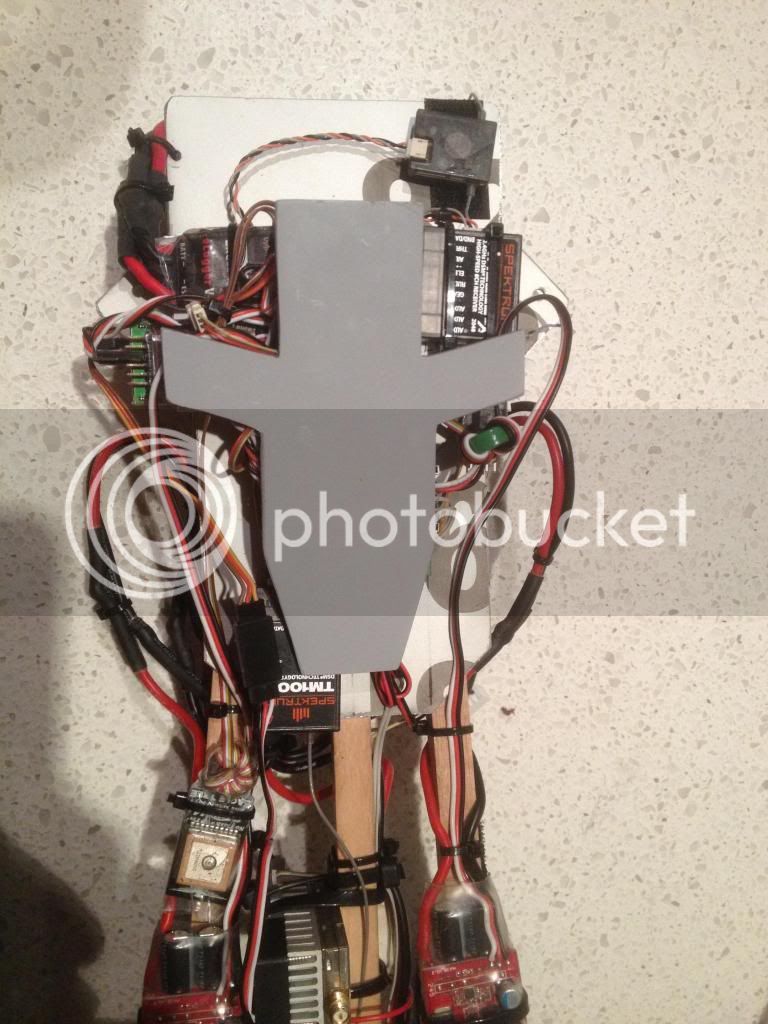 I copied Daves battery tray, I used electrical ring terminals for the attachment to the tri and the wire is some fence tie wire that I had laying around 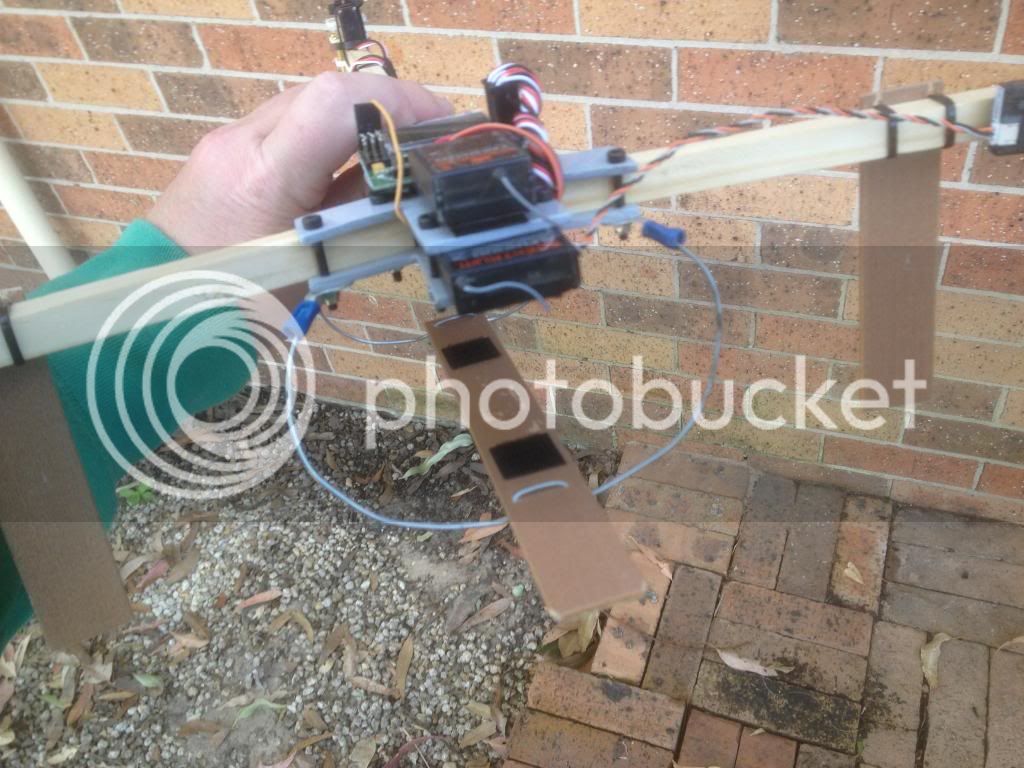 pic taken from below 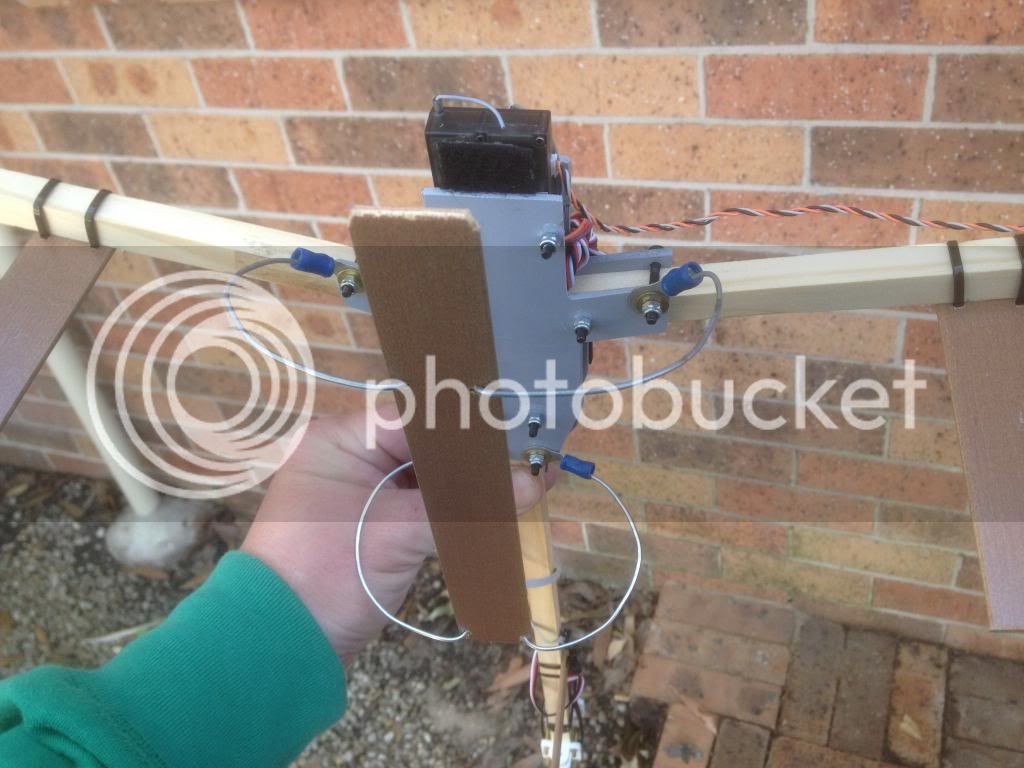 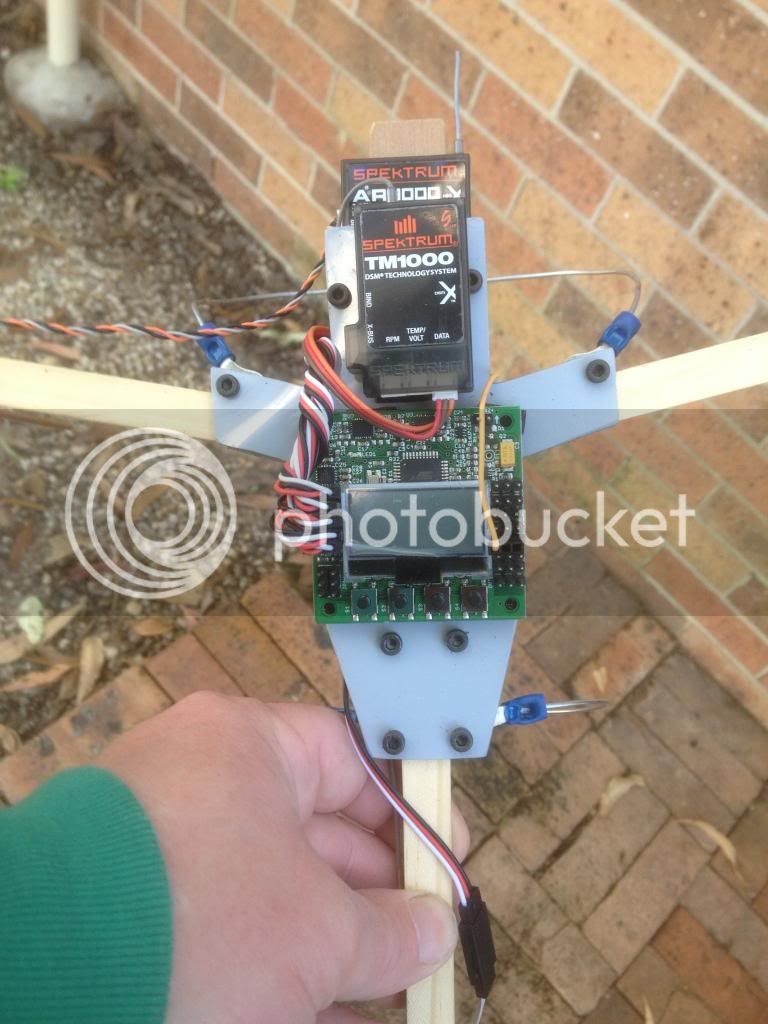 last pic until the motors and esc's are fitted 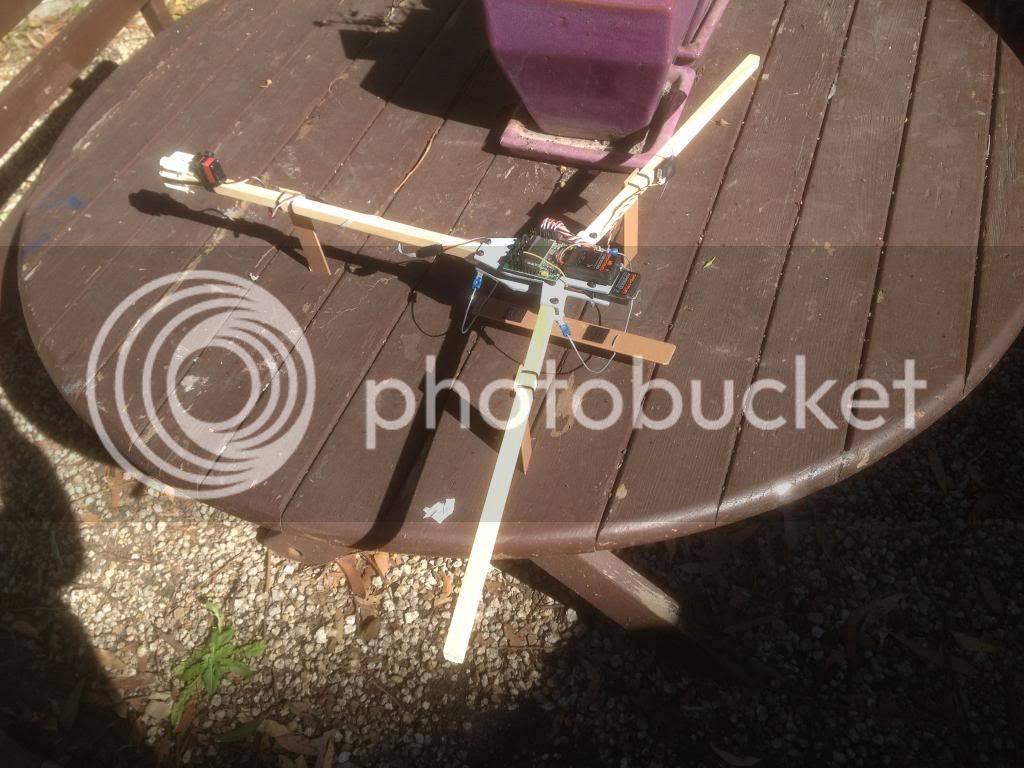 it just arrived on the door step 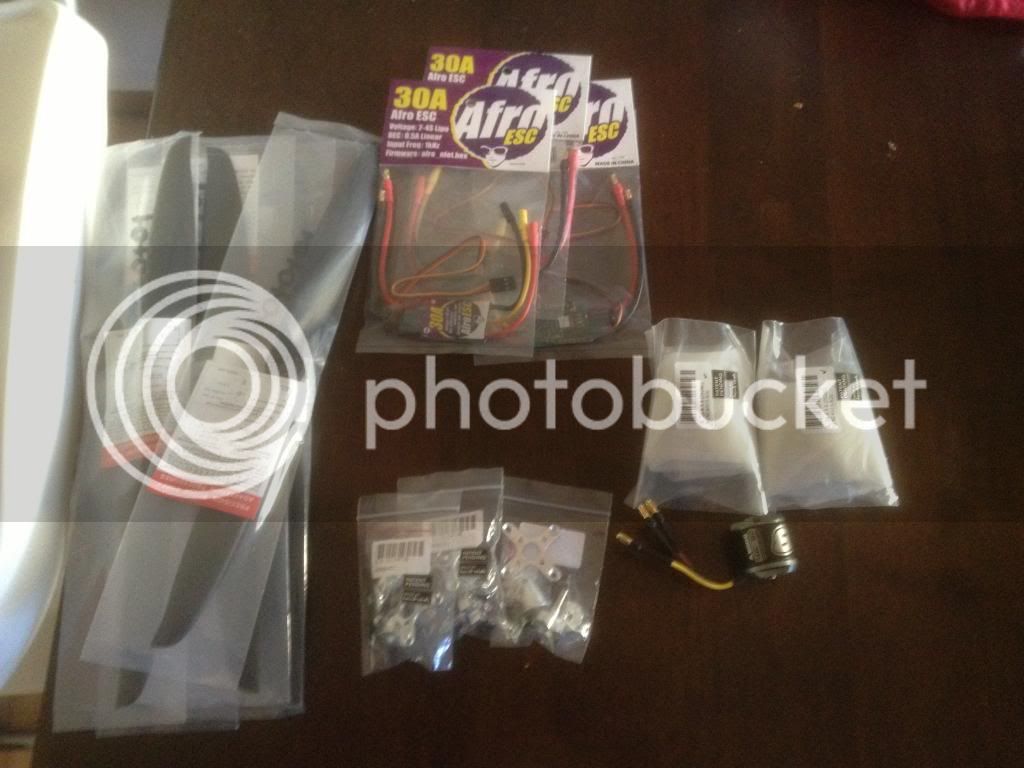 Require a lot of meat taken out before they balance.
V

#8
this is the meat taken from 3 props 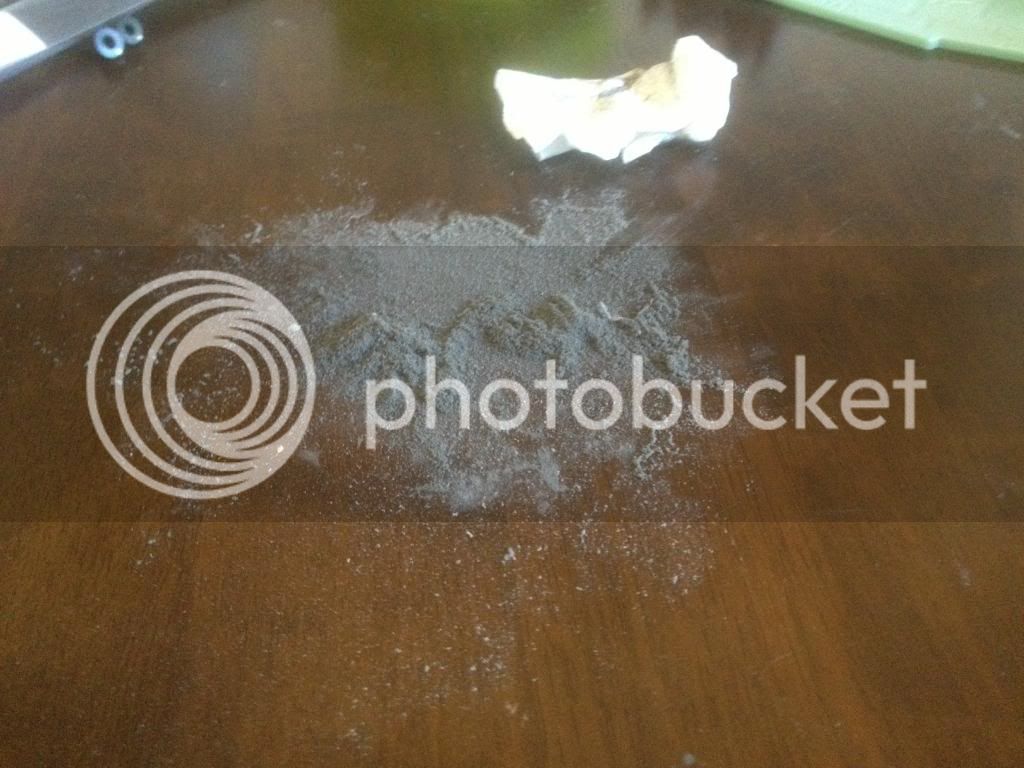 #9
Ok well I have it all together, checked balance of all motors and props and went to dial it all in tonight.
Started off by setting throttle end points for kk2 then had a quick browse at all settings.
Unplugged 2 motors at a time to check vibration from each motor/prop assembly and all check out great.
Sit her on the deck and arm the board.... Throttle up and the strangest thing happened its almost like it hit resonance or something as it shook the tail violently. I rechecked all motor/prop assembly for balance and vibration individually and all check out ok. Tried it one more time and it did it again. This has me beat...
Maybe the arm length is causing resonance at a given rpm? I don't know

And advice is welcome guys what do you think could be causing this?
5

#10
i have a handful of those type props but in apc. 11x5 12x6 and 13x4. NONE of them work on any of my 3 tricopters. try some slowfly apc or some gemfans- that may correct the problem, i think it may be weight related. those props are designed for planes and they weigh almost twice the equivalent than the slowfly of relatively the same size/pitch.
flex in arms due to long length would be a close 2nd, and may also be a contributor to your problem.
V

@5oc Charlie
Why don't those props work on your tri's and what it your tri boom length's?

#12
One thing I notice is those are extremely deep pitched props for a multirotor.
V

#13
Cyberdactyl said:
One thing I notice is those are extremely deep pitched props for a multirotor.
Click to expand...
Yes you are right they are steep.
When I ordered the bits for the mk1 I did not do any research on what blokes where running on their try's but when I put it all together I was really surprised by how well it flew so I went with the same approach for the mk2 build
5

@5oc Charlie
Why don't those props work on your tri's and what it your tri boom length's?
Click to expand...
the 12s and 13s i tried to run on my larger tri with 18 inch bass arms 2814 700 kv sunnyskys- the 11x5 i put on the smaller bat bone with 2216-800s.
swapped them out for slowfly props and it was immediately night and day difference. im not sur why but i have all 3 sets sitting in the bucket- theyll go on one of my planes when i eventually break a prop. ive checked balance etc and its not that. i came up with the weight thing because its the only physical difference (outside of obvious prop shape) i can come up with.

#15
Those deep pitch props will be inherently clunky during a hover compared to a 4.5 or something similar, but once you spin them up they will go.
V

#16
Been having a bit of a think about this and I think I will try longer arms first before I change props, I had no dramas with 13's with 450&470mm booms so I'm going to try that first.

I didn't crunch the numbers until now but 18inch booms are the same as I was running on my mk1 (450mm).
What exactly did the larger props do on your tri?. I'm surprised that the 13's didn't work on your setup.
I will soon upload a vid I took of the mk1 maiden loaded with av tx (not running) and eagletree osd+spektrum ar8000 & tm1000. I didn't have the camera mounted as yet but as the vid will show I didn't have exact balance of prop/motor which shows on the keychain cam when mounted, think you blokes call it jello
V

#19
It's farther's day today and as such I was given a golden leave pass to put a few hours into my mk2. Well I have some good news,,,, I went back to running the longer arms like the mk1 and I got rid of the tail oscillation "yay" however I found out that the yaw mech was flogged out and the motor mount had snapped.
I re made the yaw mech and made a new motor mount from some 2mm alloy plate I have in the shed.
I had a quick fly and yay it flys, it needs tweaking of the pi's but at least it flew.
After I tweak it I will post up a short vid
V

#20
Thought I would post a bit of an update:
Dialed it in today and had a lot of fun.
Hover is at 50-55% throt and a lot more stable then the mk1, I have not taken any current measurements yet but I will soon and post the results.
With the mk2 I am running all ccw props and I was amazed by how much offset is needed in the yaw to oppose the natural yaw of the ccw props. Yeah it flys well but I think I will get some CW props as well.
I got past the 12min mark when a bit of a gust hit and I rolled left and all of a sudden the right arm folded in and the right prop ate a huge chunk out of the rear prop and also the motor mount broke on front right. Goes to show the awesome quality of the HK NTM motor mounts the zip ties where untouched.
12min on the clock and I still have 14.5ish volts still in the pack so educated guess is that I have finally nailed it for flight time.
Over the next few days I will put the spare prop on and take readings and total flight time.
Last edited: Sep 7, 2013
You must log in or register to reply here.
Share: Facebook Twitter Google+ Reddit Pinterest Tumblr WhatsApp Email Link
Menu
Log in
Register