#1
OK so I am just getting started in electric flying and have never charged a a LI-PO battery before.
I bought a cheesy 25W charger just to see if I like electric flying, I did not want to big of a investment if its not something I want to get in too deep. I will buy some thing better later on if this some thing I want to get into.
The charger I bought just has two balance connectors for 2S and 3S batteries which is all I should need, it has 4 LED's that tell when the battery is charged, I was thinking about making a lead to plug into the XT30 power connector into my Fluke meter to monitor the overall voltage of the pack, does this sound like a good idea?
I have bought a couple of 3S and a 2S battery to use in my Tiny Trainer I built, they have what I believe are JST-XH balance connectors with leads that are too short as far as I am concerned so I am going to order some extensions off of Ebay [unless there some where cheaper] so I can put the battery in a bag while charging, I also need a LI-PO bag, where would be the best place too get one? can I just put the battery in a old ammo can to charge it? maybe drill some vent holes in case of explosion/fire.
Two of the batteries I bought had a plastic fitting that fit over the balance connector to act as a strain relief when unplugging it, where can I find more of them?
Thanks for any help

#2
Really all you need is,a cinder block and a bag of play sand.

Hang your battery in the block holes and place the plastic bag of play sand over the hole.

If there is ever a problem fire / heat meltbthe bag, sand fills hole, fire goes out.

#3
I also with @PsyBorg, a cinder block will work. I use an ammo can, I’ve lined it with drywall and have made individual compartments for the battery’s. The hope is if one catches fire, it will not destroy all of them. No need to drill holes, just remove the rubber gasket.

Instead of your Fluke meter, I would recommend a cheap cell checker.

Mentor
#4
Also, here's a link to some of those clip on balance connector things - I love 'em

they can also be left in the battery while flying to let you know when to land. Can set alarm to voltage of your choosing. I use them all the time, works great!

Mentor
#6
Cinder block is a great idea, but sometimes it's not the most practical for the area you're charging at. For me, for example, I charge at my desk at work on Mondays, before I head to the field to fly after work. I have a smaller lipo "safe", which is a box style bag that looks like the below image: 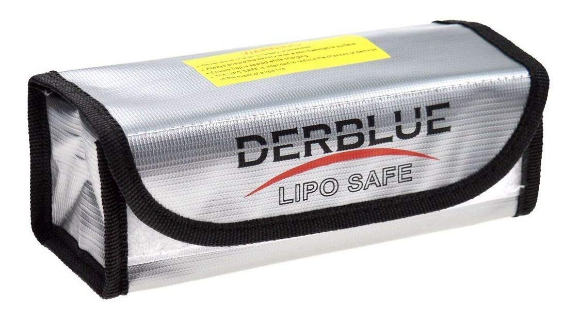 I usually charge one battery at a time in these things, and I always use the bag, just in case something happens. it's not going to contain a MASSIVE fire (i.e., a 6S battery decides to suddenly go up), and they'll definitely smoke like crazy, but it'll help at least slow it down a bit, enough for you to get a bucket of sand or a fire extinguisher on it, because you should be monitoring your charging.

I've seen guys charge with Ammo boxes, which contain the fires, for the most part, and I've seen the results of a Bat Safe, which is actually pretty spectacular when a battery burns in one of those - some smoke, no heat, and it contains the fire really well.

#7
The above advice is all very sensible.
I don’t treat lipo like an explosive. I just charge sensibly at 1c (capacity in Mah divided by 1000) and never leave unattended. Put it in a non flammable container if you are concerned, I use a lasagna dish with a plate on top.
Never run them below 3.5v per cell and always put them into storage charge after flying unless you are going on the next day or two again. Just don’t leave them flat, that’s not good for them.
I have done this for 4 years, I have never had a battery puff, catch fire or get in any way near a dangerous condition.
You must log in or register to reply here.
Share: Facebook Twitter Google+ Reddit Pinterest Tumblr WhatsApp Email Link
Menu
Log in
Register