#1
I am proud to present you my first self-designed foamboard model: The Nord 2501 Noratlas. 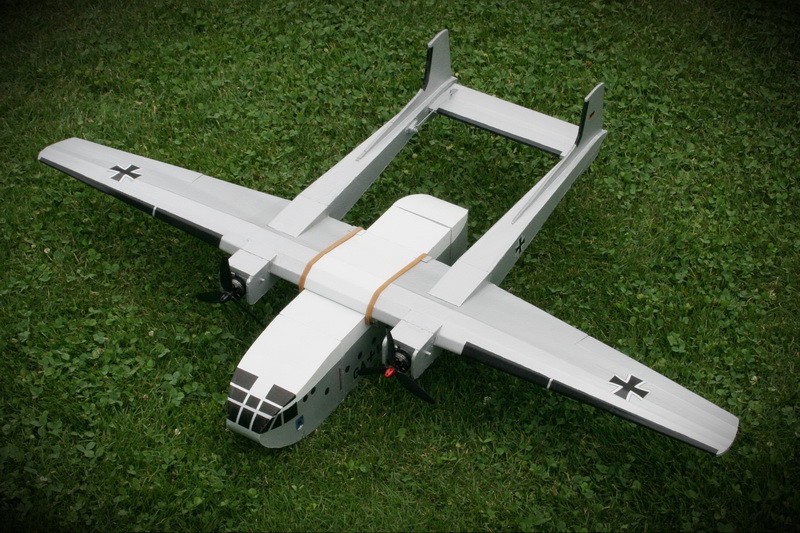 The Nord Noratlas was a military transport aircraft, developed and manufactured by French aircraft manufacturer Nord Aviation. In September 1949 the first prototype took off for its maiden flight. The Noratlas was capable of transporting up to 7.5 tons of freight or a maximum of 40 passengers.
A total of 425 planes were produced until 1961. Starting in 1956 the German Air Force received deliveries of 178 Noratlas which were called N-2501D. The Noratlas was succeeded and eventually replaced by the multinational Transall C-160.

Today only one Noratlas is still in flying condition. It is maintained by the association “Le Noratlas de Provence” located at Marseille Provence Airport. [Noratlas de Provence] You can still see the Noratlas flying around airshows in Europe. These pictures were taken at the Hahnweide Oldtimer Meeting 2011 in Germany.

But why did I choose the Noratlas for my first own design? There were three reasons. First I wanted to design a plane that has not been done as a foamboard model before. And indeed I haven’t seen any Noratlas made out of foamboard on the internet. The second one was that I wanted a twin engine design. Finally, the third reason was less technical but more emotional. For the explanation I have to take you back in time to the late 1950’s. At the time my father was an 18 year old boy who was, like his brothers very fond of model building. Back in these days you could either build free flight models or go for control-line design, where the plane was connected to the operator by a pair of lines, attached to a handle, that worked the elevator of the model. So my father decided to design a control-line version of the Noratlas, which at the time had just entered service in the German Air Force. The only thing he could base his design on, was a paper model of the Noratlas. The build itself was entirely made from Balsa wood with some pine wood elements. To the delight of his mother he was building the plane on the kitchen desk. Once ready it took to the skies with no flaws. It even had a cargo door that could be opened in flight to drop some parachutes or sweets for the spectators. In my childhood days I was always told stories about this control line Noratlas, and the model has in fact survived until today in the attic. So when looking for an idea for my first own design, it was clear that the Noratlas was well on top of the list.

For the design I started with a 3 view drawing I found on the internet and quickly sketched the outlines in a CAD program. For the detailed design I used standard Flight Test style solutions. The design of the fuselage and tailboom is very much inspired by the FT Bronco. For the wing I chose a typical foldover wing as it is used on many foamboard scratch builds. After building a prototype and gathering some flight experience I designed the final version, combining many little improvements, but also a complete re-designing of the tailboom in order to be more scale.
Some impressions of the build:

Link to my release video:


If you’re interested in building my little Noratlas, stay tuned as I will upload a step by step build video and free plans soon.

#3
Excellent airplane. Very well thought out and executed design. Not many prototype foam board airplanes fly that well. I think you have a winner! Congratulations.

#4
Thanks! Seems I got a good portion of beginners luck 😁 Now I need to finalize the plans! Hope to have them ready soon

#5
It was a lot more effort than I would have ever thought, but finally the build video and the plans including the free STL files for the 3D printed parts are finished. Check the 2nd post for the link and the attachments.
I hope you'll like it and maybe even decide building a Bavarian RC Noratlas. I would be more than happy to see pictures or videos of your Noratlas in this thread.
Also any comments, questions or improvement proposals concerning the design are very welcome.
P

#6
Bavarian, I like what you've done with the Noratlas, particularly with the clean way you've got the booms mated to the wing. I also like the design of your wing. Any chance I can borrow it for my Caribou? I think it might be a good alternative, tho I will have to work on the double dihedral.

#7
pajaar said:
Bavarian, I like what you've done with the Noratlas, particularly with the clean way you've got the booms mated to the wing. I also like the design of your wing. Any chance I can borrow it for my Caribou? I think it might be a good alternative, tho I will have to work on the double dihedral.
Click to expand...
Hi pajaar, I think the design of the tail booms around the wings could be a simple solution for your Caribou. The most important thing is to find the proper sizing of the nacelles. If you make them square like my Noratlas booms with the original width and height of the Caribou, you will end up with huge blocks. Play around with some card board pieces to find a good looking size first.
For sure you can borrow all of my ideas for your design. That‘s what Flite Test is all about! Be sure to check the plans in the 2nd post and the build video to get enough info. Let me know how it works out.
You must log in or register to reply here.
Share: Facebook Twitter Google+ Reddit Pinterest Tumblr WhatsApp Email Link
Menu
Log in
Register