Origin 300i- Build Thread and Plans

#1
I'm gonna put this design out here, it was a fun and challenging build, but very rewarding to see it fly. It's not some foamboard looking thing with square corners- it gets really fancy, and with that comes difficulty, especially in beveling the correct angles. it's a whole under-bevel-and-squish trick, and you don't have to glue all the seams- but if you're good at not using too much glue and keeping it light, it couldn't hurt to glue every seam.

It's based on the Origin 300 series ships from the game Star Citizen. As for the 300i's role in the game, it's basically a space BMW. Same appeal, same market sector. https://starcitizen.tools/300i is the wiki page for the 300i. For paint scheme ideas, it's easiest to stick with the 300i, but you can also take inspiration from the variants of the series (the 350r is pretty cool if you ask me).

Flight characteristics depend on how you build the powerplant, which is deliberately not specified or designed in. There's an obvious spot for a rear firewall, and I *recommend* a yaw-vectored rear pusher prop (C pack radial 4S, 3000mAh+ to balance), but that comes with some drawbacks, such as it totally needing a tail skid to prevent prop strikes that trash the vectoring servo. You can also build it as a twin B pack if you put a pusher prop behind each main wing.
Landing gear is also not specified, I went with tricycle gear not unlike the ship in the game, but it can be done as individual struts or steerable nose and heavy wire mains. It's up to the builder, but be aware of bumpy runways, and bumpy things that are not runways but you wish they were.

CG sits 1-2 inches behind the root leading edge. It seems really far forward, but it's what works.

#2
Nice! Although, I am curious how you are planning on setting up your control surfaces? Is it A-tail+aileron or elevon+dual rudder? Do those ctrl surfaces on the lower winglets deflect symmetrically, asymmetrically, or one at a time (only the inside flap deflects in a turn like on a Lippisch GEV)?
Last edited: Mar 31, 2020

#3
Walden said:
Nice! Although, I am curious how you are planning on setting up your control surfaces? Is it A-tail + aileron or elevon + dual rudder? Do those ctrl surfaces on the lower winglets deflect symmetrically, asymmetrically, or individually (only the inside flap deflects like on a Lippisch GEV)?
Click to expand...
The rudders deflect asymmetrically, with a symmetrical offset. The big upper control surfaces are elevons. I opted out of rudders, and left the rudder surfaces fixed about 20 degrees outward, and used thrust vectoring for yaw.

#4
Thank you, that is also the way I was thinking on programming the FT Aura on my new plane. It's good to I have a second opinion. 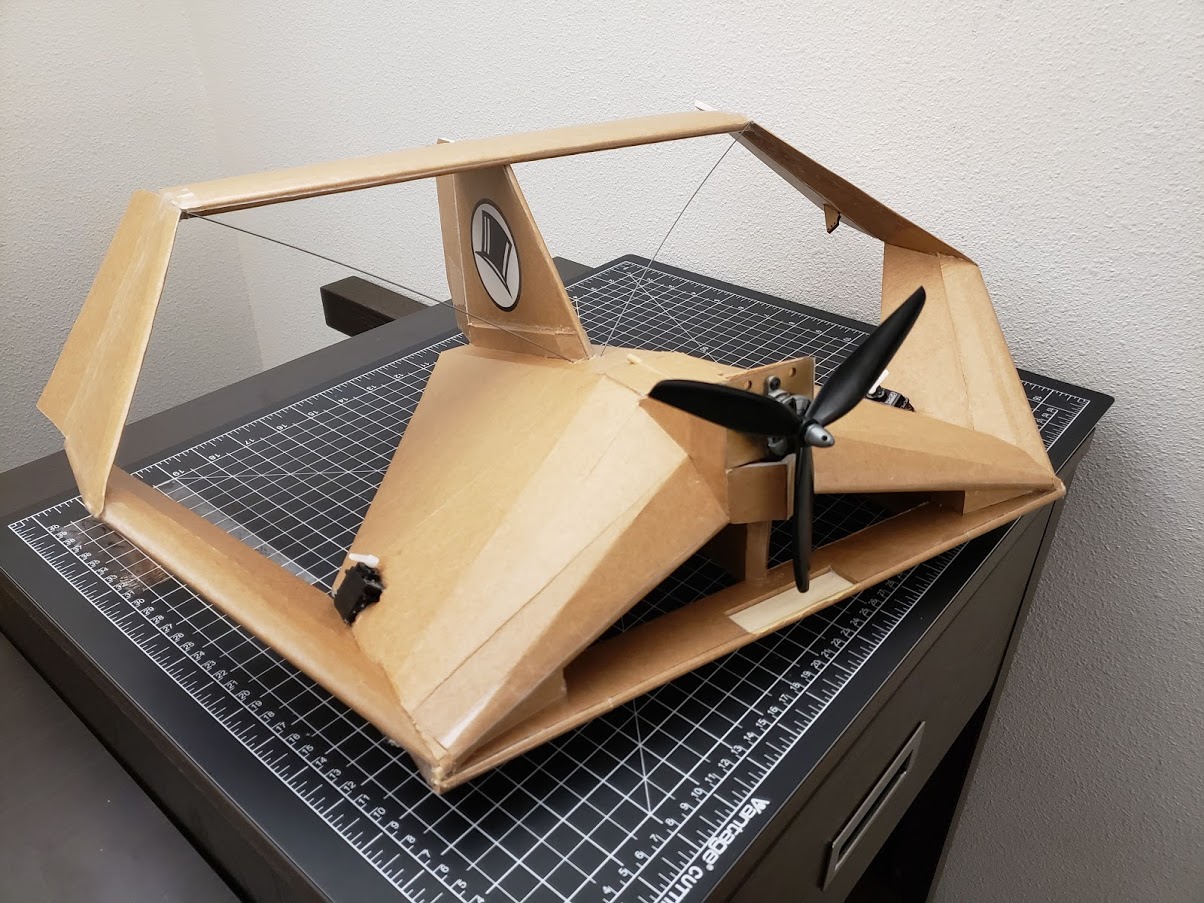 #5
Wait, what's the anhedral on those elevons? That'll make you yaw more than roll.
I recommend not using an Aura board, especially not right off the bat, on an exotic design.

#6
flemdogmillionaire said:
Wait, what's the anhedral on those elevons? That'll make you yaw more than roll.
I recommend not using an Aura board, especially not right off the bat, on an exotic design.
Click to expand...
45 degrees. It is primarily a ground effect craft, therefore "yaw more than roll" is exactly what I designed it to do. You might have a point about the FT Aura. I will test fly without it first while waiting on my new receiver cord to arrive. More testing needed.
Last edited: Mar 31, 2020
You must log in or register to reply here.
Share: Facebook Twitter Google+ Reddit Pinterest Tumblr WhatsApp Email Link
Menu
Log in
Register