#1
Hi there, My local Club is having a Cub only Fun Fly next. Fortune would have it, I had the plans (for B and A sized) and components to go into both.
I will say I am not doing much different than Josh did. So I won't bore you. but based on the way the simple Scout (C sized) handled landings at my field, I will be reinforcing the landing gear.. A lot!

other than general build pics, I will highlight how I upped the landing gear game. Right now I am at the dreaded electronics, controller program phase.

'Nuff of this. "roll that juicy build footage" (pictures.)

my plan is to use either craft sticks... or a credit card to line the slot I also have a credit card on the front and back which I added hot glue between all layers of the tab. The card-paper, paper-foam, foam-paper, paper-paper paper-foam... (you get it), of the landing gear tab.

the field can be a be rough. Also If I can in time, I want to add custom rear wheel for taxiing. like I did with my flying sub. It was Attached to a inner hole on the rudder servo. and a control horn glued to the top of the makeshift wheel.
based on my schedule, it will be Landing Gear and electronics on Sunday! which will finish it.

It's basic but now I can fly at the fun fly!

Please add your experience or 2 cents as needed, and thank you.

#2
BTW, I LOVE the way this looks. really Love it. thank you @Rasterized. I wish the print quality printed right when I printed it.

Maker of skins and decals for foam board RC planes

Moderator
Mentor
#3
FoamyDM said:
BTW, I LOVE the way this looks. really Love it. thank you @Rasterized. I wish the print quality printed right when I printed it.
Click to expand...
Don't thank me. The sun burst livery is a pretty common Cub scheme. That's all you brother! Great job!

Maker of skins and decals for foam board RC planes 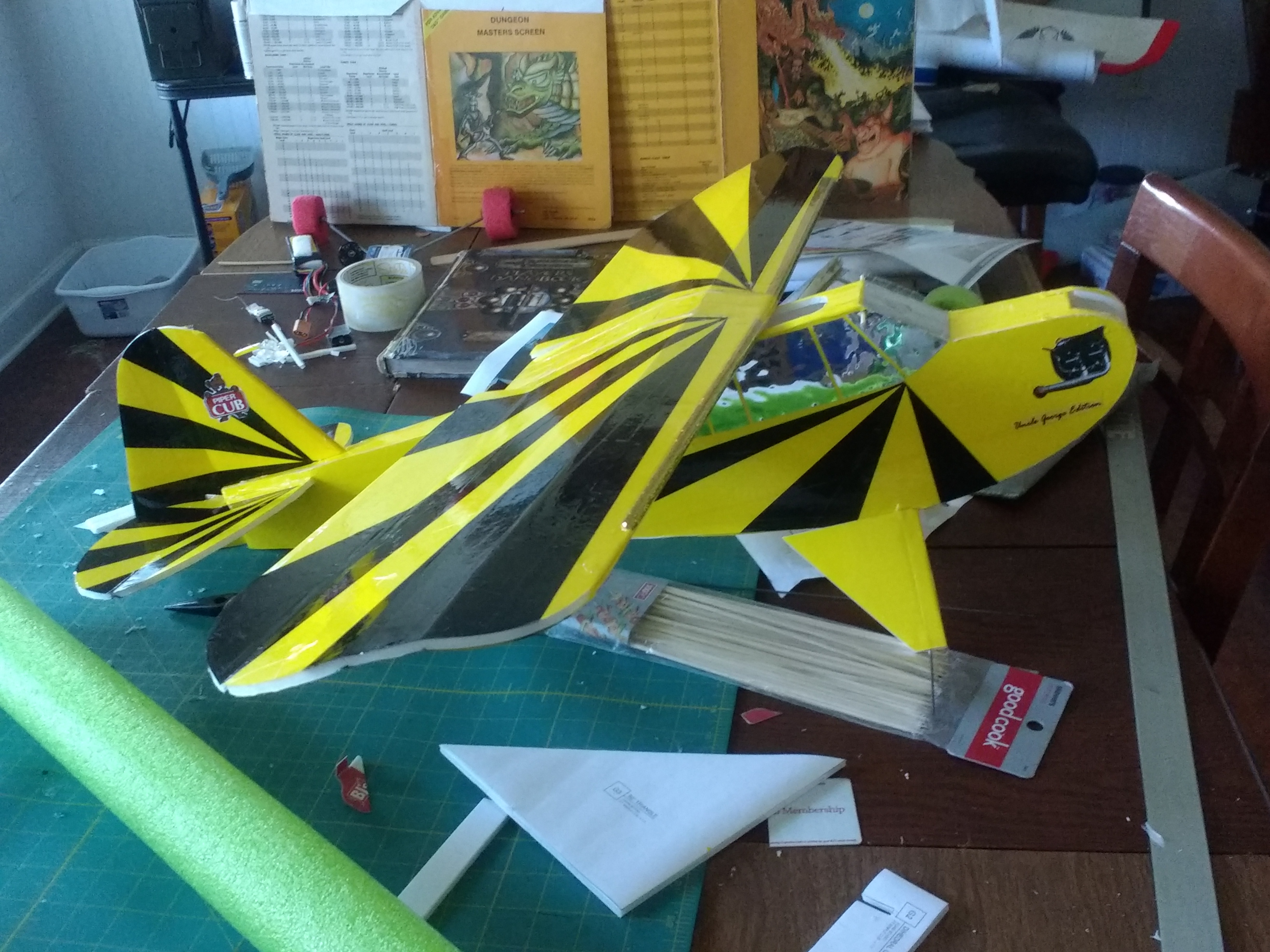 Love the old school DM screen in the background!

#8
Thank you All.
And yes @Rasterized it is 1st Editions DND DM Screens and 3.5 editions book in front, behind the plane. I run a weekly campaign that currently shares the table. (reconvening tonight). Glad to see some who know/remember.

I finished this up - with mixed success. Advice welcome, see below.

The image here shows that I had to add a second Landscaping flag wire along the rear gear panels for them not to bow under the weight. I covered them with a 1" wide strip of peeled paper from other parts and taped over it. I put in a 1500 mAh 3S in the nose, about a finger width in from the firewall, resulting in perfect balance! 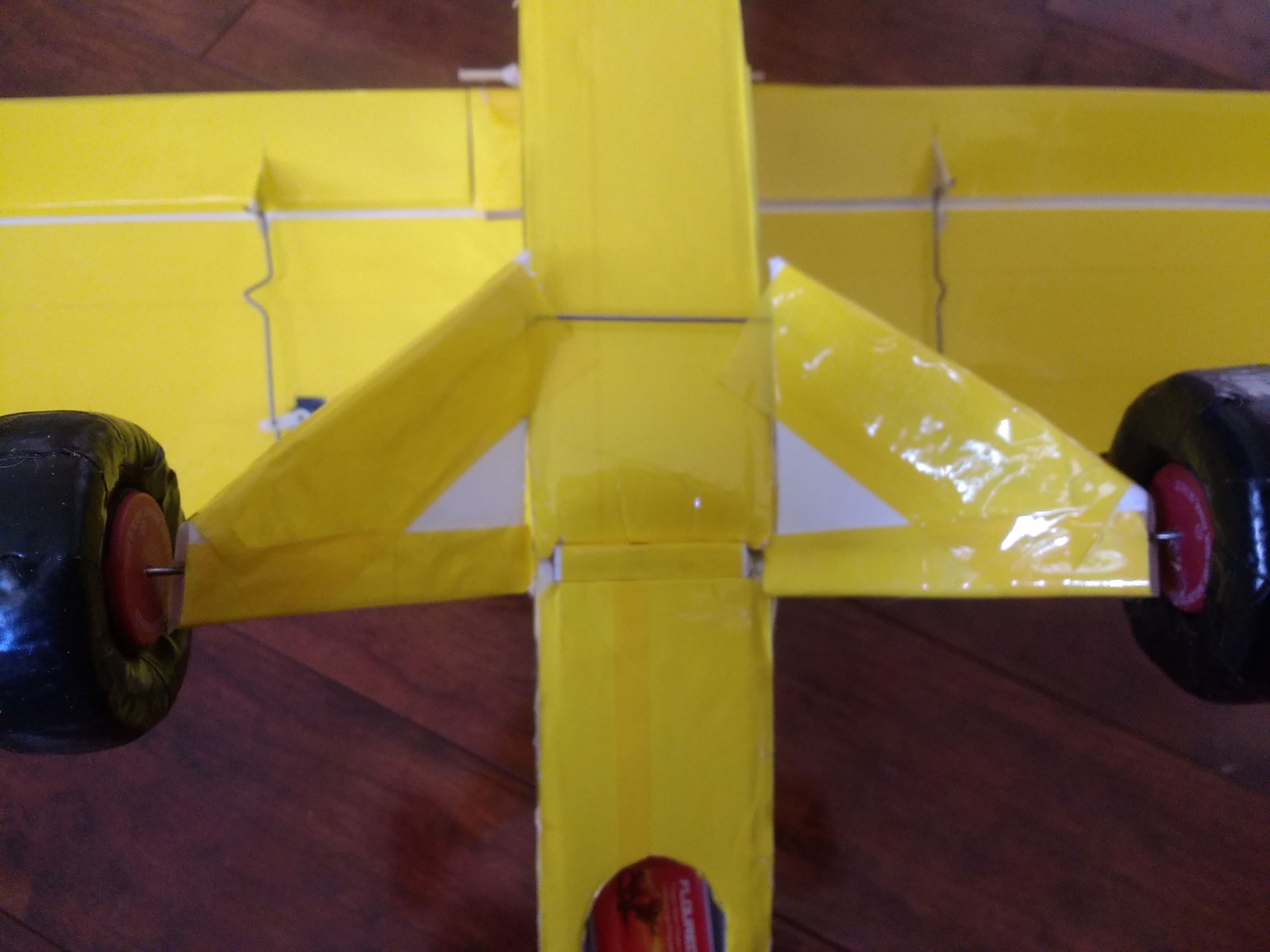 The wheels are something I love! Saw a club mate with them. and I slapped my head. DUH! They are pool noodle foam wrapped in electrical tape. it's a bit tricky to do so it doesn't stick to itself as you pull the long loop through, and the hubs are bottle caps from soda/water bottles glued to each other, and taped with electrical tape tight, twice around. This makes a very durable and tight fit. The foam wheel no long pulls off the hub.
My Gear problem: the wheels pull in, and slide up the wire and lock. While they are built-in brakes, they are not controllable. I forgot to scuff up the wire for the hot glue hub retainers to grab to, Which Is why the wheels come off. I suppose I will need retainers on the in and outside of the wheel.

When putting together the controls, I put in flaperons. I played with were I wanted it. (3-way, pot nob in the middle, or index finger lever). I finally decided the finger lever.

Below is the Maiden Video:

Problems during flight -
Flaperons on The Finger Lever: This may contributed largely to the squirrel-like behavior. I wanted them to be slow and adjustable but I couldn't find/remember a way on my Radiolink A10 to limit the travel to positive travel only. My problem came as you may guess from moving the finger level/slider to the negative on accident causing a both-ailerons-full-up situation. It was a handful to fly and I couldn't get it to simmer-down.
Gear: They locked up too much (discussed above) and eventually the retainer came off, relieving the wheel of it's obligation to support the plane during takeoffs and landings.
Low Rudder travel: may not have been a direct issue, but it made recoveries harder.
The rear wing center section: It folded under the rubber band compression, Changing the angle of attack. this doesn't happen with the Simple Soarer, so I wonder why this model. Popsicle stick reinforcing will fix that!

When I got it to fly right, it was a joy to tool around the sky in. I can't wait to add bombs!
That being said, I will try it without flaperons and improved gear and see, right after a damp rag rubdown.
Last edited: Oct 8, 2018

#9
Thanks @Bricks. I love how it turned out too.
I would love it to fly the way it looks. It fits nicely in the trunk or front seat, It breaks down easy. It is a great take-along plane.

#11
FoamyDM said:
Below is the Maiden Video:
Click to expand...
Love your kid's commentary on the video! "Hey, it actually landed!"

I've had my fair share of "squirrely" Cubs so I can relate, thanks for sharing!

Love the Gygax approved screen too.

#13
Thanks all,
@Michael763 good hear from you. While the Maiden was successful, at no point did it become fun to fly for more than 3s.

I just finished upgrades/rebuilds so here are the details of the landing gear and wing center curling issue.

I used the yellow bread tabs I had saved. I bend the ends about 30 deg. Which allowed them to spring a bit and keep the wheel away from the wire bend, then glued them to the strut ends. After sanding I put the wheels on and glued the axlevends and let them cool completely. All the while ensuring about a plastic tab width clear, for free rotation.

(I found another bread tab use as chord IDers.)
To handle the center wing section curling issue, I simply added craft sticks.

I made sure they didn't protrude past the bottom surface that rests on the fuselage top.

Lastly some of you may wondering why this Cub is named the Uncle George Edition. My godfather Uncle George lived in Marengo IL. When I visited my grandmother (his sister in law) we would always take a trip. He was a mechanic for American Airlines. (I'm fairly certain). He was man with an eye in the sky, a calm demeaner and an easy laugh. He would bring out videos of model air shows. I remember (in the late 80s) him proclaim, the 22' F-15 Tomcat we saw "used real jet engines!"

That picture, above, is near my 12th birthday. I'm in blue, my grandma is behind me, and he is in red with his ever-present pipe. the picture is in his backyard. That tree is an apple tree. Which my grandmother turned into the BEST applesuace her side of the mississippi.

He owned his own Cessna 170a, and took us up whenever we visited if the weather allowed. It was built around 1945? And while a Piper cub is not a Cessna 170a. It reminds me of it. And the memory of flying the plane so young. The number on the side of my cub is the registration number of his plane. Now owned by a guy on an air ranch property two or three towns away in Illinois.
The last picture is the last I have of him and his wife, my godparents. And those photos are how I remember him. If I get a picture of his plane, it will be added here. The plane I built here is a small omage to his memory. Hence, the "Uncle George Edition" livery. I imagine if he were still alive today, we'd fly it around together at his property in Marengo, Illinois. I think her name is now Margaret.

Let's disable flaperons, and see how she flies!

#14
This past Saturday was the 1st annual Cub-only fun fly event at the club. I went out friday to make sure the modifications held up. They did splendid. I flew a couple of circuits with success. Brought it in and recharge the battery for the next day. Caught this amazing sunset before we all left. 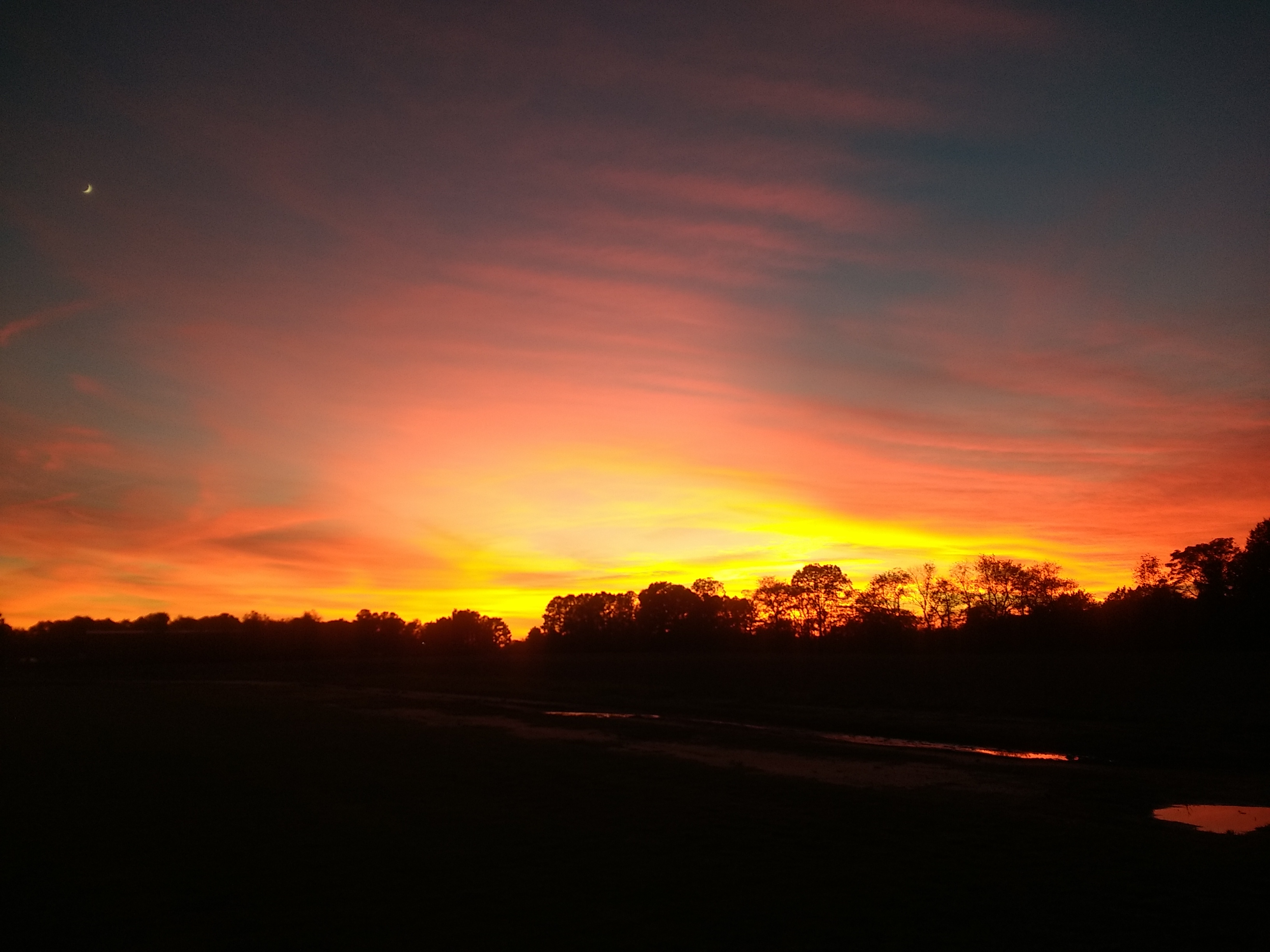 the next day we head out. I had one of three FT Simple Cubs. The other two were masterfully built with FT liveries in black or red. Mine was all home built. Tape coloring, homeade wheels, and gear.
I was definitely proud. And glad to be part. 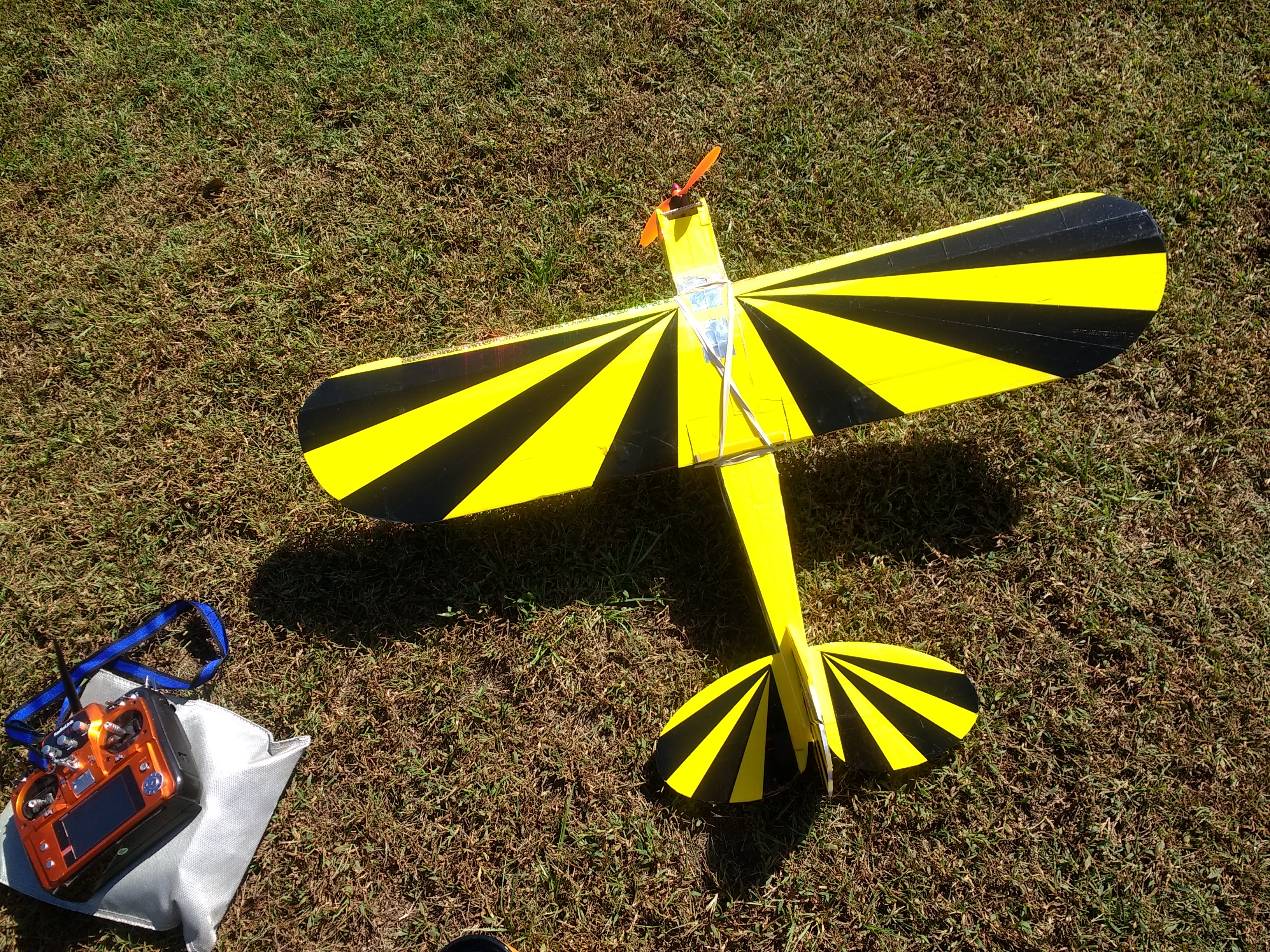 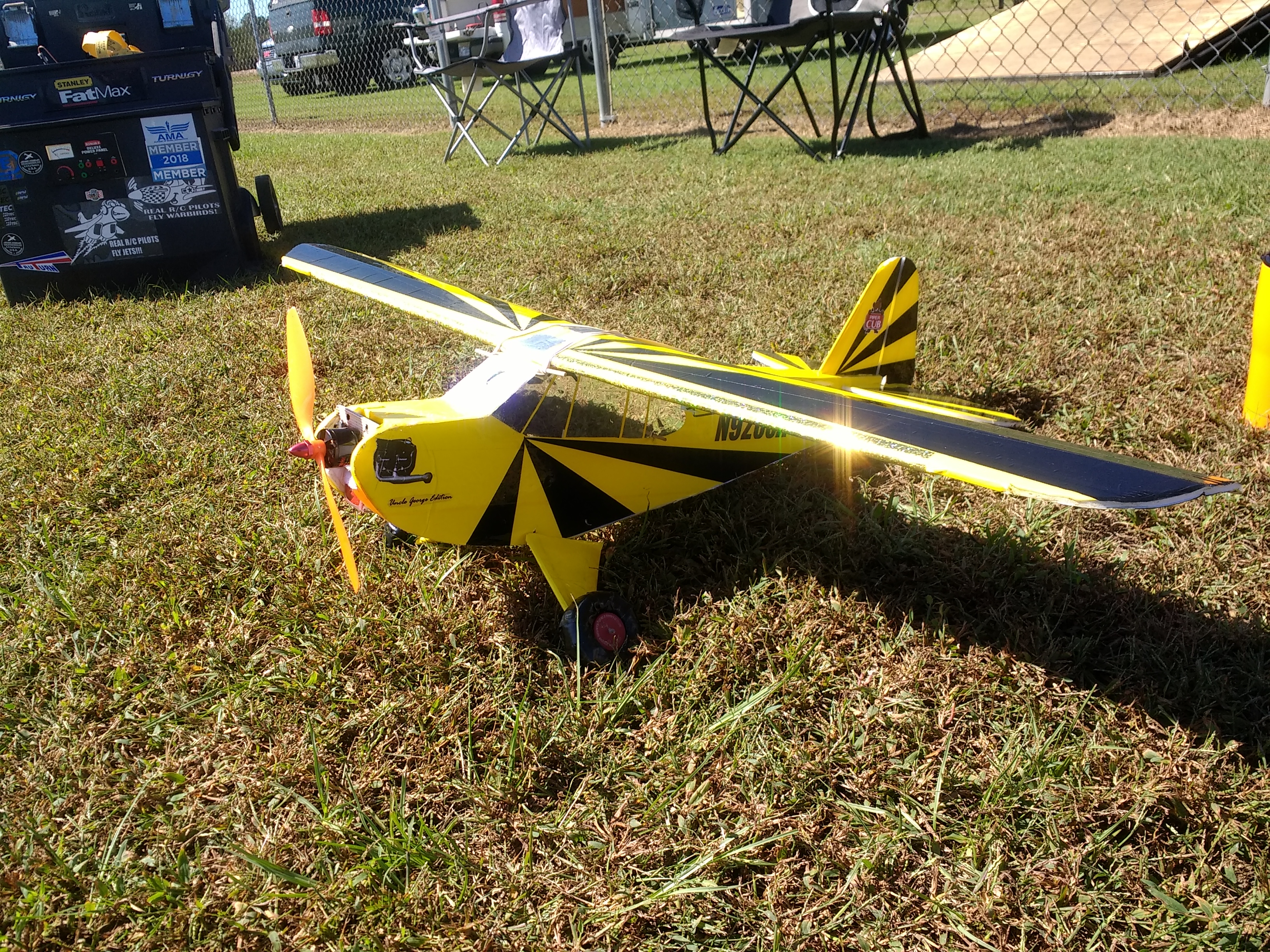 My first two flights brought the plane WAY out and I lost orientation as a tried to save it. Once I dumped it as I watched it fly behind the houses on the other side of the street. In the pic below. 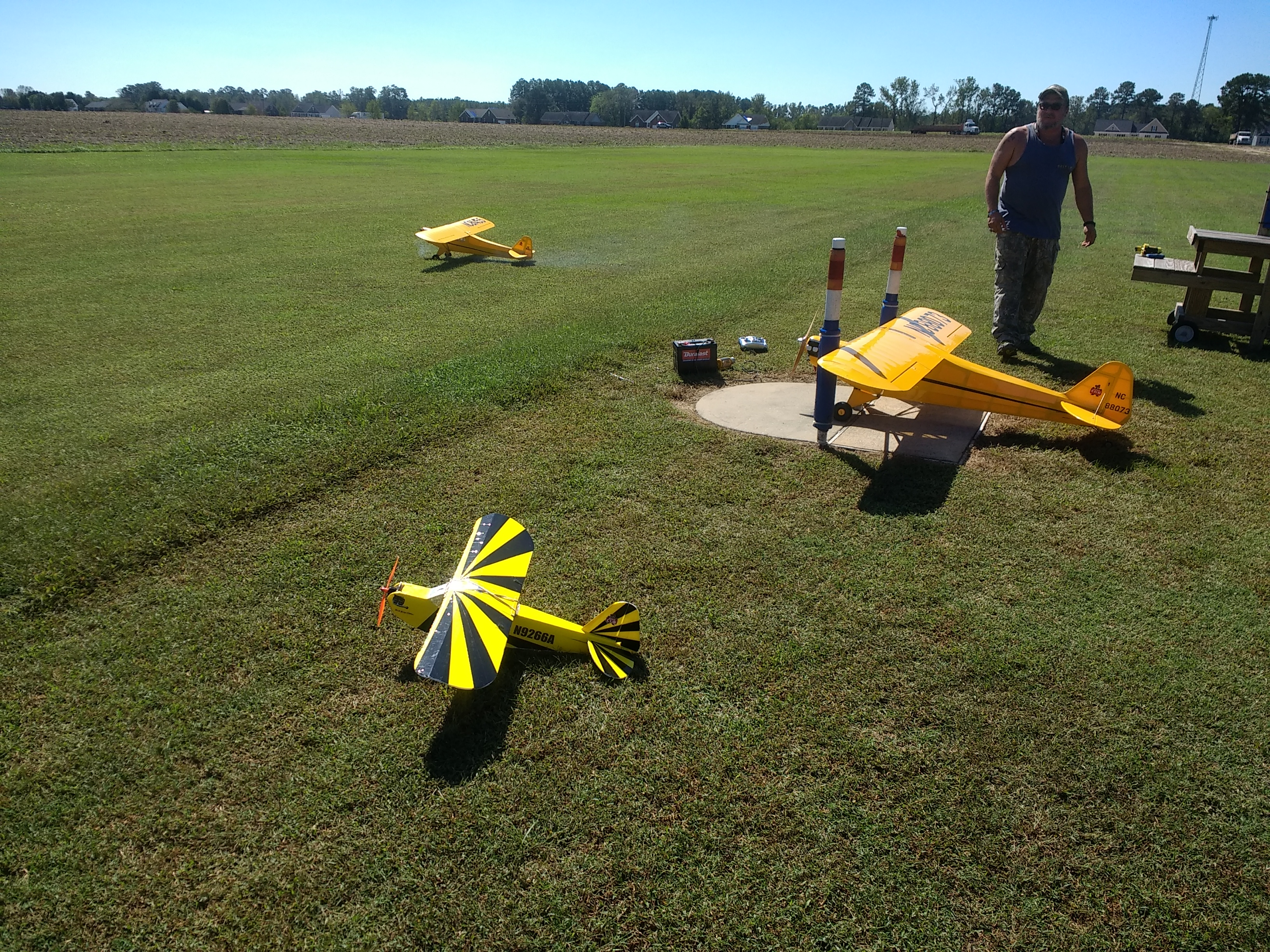 I finally asked for some pro help. What was I missing? Our club president Kent Porter took my plane and I aside and worked with me to get it right. reducing throws and adding even more expo and dual rates. Then he trimmed it out with me. At the last minute I remembered I could video a bit as I wasn't flying.
I spent the rest of my batteries and time tooling it around in circuits and landing. The guys kept ribbing me that money was riding on if I (the newbie) could spot a landing. Third try, I dropped it right down with a two wheel stick, nose forward, and tail back down. Like the olypic gymnast who nearly faltered but stuck the landing. Cheers all around! I spent time relaxing with the clubmates. Weather, comraderie, flying, It really was a perfect day.

Thanks all for the encouragement here. And I hope this inspires someone to go the extra mile.