Sloped for the first time!

Mentor
#1
I live in San Diego, near the coast, and we have a little RC spot that many guys will go fly at, known as Dave's Beach.

This little gem is an IDEAL spot to slope soar from: 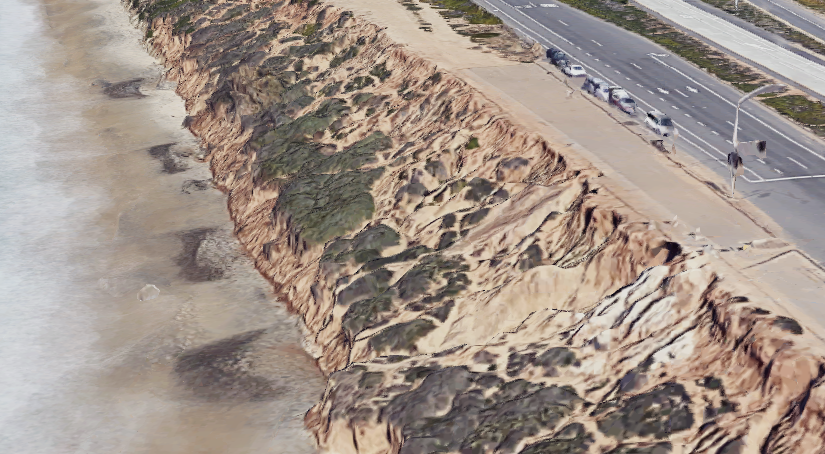 Straight from Google Maps, you can see that we've got a nice hillside there that generates good amounts of wind when we have a nice W, WSW, or SW wind blowing. Most of the guys stand along the cliff edge and throw out over the beach, and if there's 8-10 mph winds, you can get plenty of lift.

My first attempt, I took the FT Simple Soarer out and was nervous as heck throwing it. All I could think was, "Please don't end up on the cliff, and please don't end up on the BEACH!" We've had incidents along the cliffs just a couple miles south of collapsing, and earlier this year, some people died when some boulders fell off the cliff and rolled into them while sitting on the beach below, so I REALLY didn't want to have to go down the cliffs to retrieve a downed plane.

It was a decent, stiff breeze blowing, so I pulled out the plane, strapped the wings on, and said, "It's only foamboard!" and tried to toss it into the wind. I say "tried", because as soon as I let go, the plane lifted up out of my hand and immediately started climbing. I had to nose it down into the wind almost immediately, and it picked up some speed, but there was PLENTY of lift along the bluffs there that day. I was able to fly about 50-60 feet out, actually over the sand, and still had plenty of lift to come back up at almost any time I needed it - simply point my nose into the wind, and bring the stick back to center, and it would climb up almost effortlessly.

My only problems were landing. As you can see, there's some asphalt right near where the cars are parked; this is where most people land. However, it's also where a lot of spectators stand, and people bicycle or walk along on the path. Trying to land, you have to keep an eye on people walking along the cliffs, and yell out, "LANDING!!!" to get people to look up as you bring something in, all while trying to avoid flying over the road that's RIGHT next to the cliff.

My first landing actually ended up going over the road as I was trying to bring it in, and "crashed" on the median. I'm SOOO glad there weren't any cars right there to cause an accident, or for the plane to get run over...It's happened before that planes have gotten run over, but I don't want to be THAT guy, you know?

At any rate, I looped back and forth along the bluffs for about an hour and a half, off and on, that day - and now I have a balsa Gentle Lady to head out and throw off the cliff. I haven't been back out to toss yet, mostly because we've had Santa Ana winds that have been coming from the east, so you can't really do any soaring at that point. But hopefully I'll be able to get back out this weekend and try tossing something, and this time take my wife so she can walk along the beach while I fly.

#2
Flew there. Liked it, but too far away. Favors southy winds and you can fly along the beach until the plane is just a speck. Try nose catching instead of landing, you can do that with slower light planes like simple soarer. There's a vortex behind the cliff face that likes to munch gliders or throw them into parked cars. If you cross the street, you avoid the vortex but probably get ran over. Bring extra ballast for the gentle lady, she is a light lift flyer..

Mentor
#3
Piotrsko said:
Flew there. Liked it, but to far away. Favors southy winds and you can fly along the beach until the plane is just a speck. Try nose catching instead of landing, you can do that with slower light planes like simple soarer. There's a vortex behind the cliff face that likes to munch gliders or throw them into parked cars. If you cross the street, you avoid the vortex but probably get ran over.
Click to expand...
I MIGHT be able to try a catch, but I tend to get nervous about the cliff edge. When I turn to look at people coming along the path, I keep thinking that I'm gonna end up stepping off the edge of the cliff or slip and fall down it, even if I'm 10 feet from the edge, so I tend to look at my feet quite a bit to make sure I'm not gonna step on something and go over.

At any rate, I know I have to give it another shot; it was a LOT of fun, and relaxing, as I didn't have to stress too much on running out of battery after 5 minutes.

#4
very glad you enjoyed it, sounds like the slope monster has addicted another victim. You'll also find it affects your power flying for the good particularly the power off portions.

Mentor
#5
Piotrsko said:
very glad you enjoyed it, sounds like the slope monster has addicted another victim. You'll also find it affects your power flying for the good particularly the power off portions.
Click to expand...
Oh, I've definitely noticed that, with being able to pick up the winds and catch it. Then again, I've noticed it overall with some of my other planes, and I've learned to glide a bit more. I think that's why it felt so natural for me to throw off the cliff and just start sailing along without a problem.

The other HUGE thing I've discovered is when I have been sloping, I've smoothed out my stick controls. Smaller movements, better control, and I feel more relaxed, like I don't have to keep stressing about swinging stuff around hard left or hard right to get things to come around. It's more flowing, if that makes sense...