#1
Would there be any negative affects of spray painting an antenna like these black so it better matches the miniquad? I'm thinking about some of the spray paint designed for plastic. 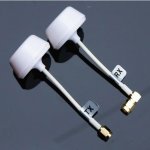 #2
I don't know but I'm going to jump in and say that regardless of what others say/think: Do a range test, paint it, then do another range test. It's the only way to know for sure.
V

#3
Any non metallic paint should be ok

#4
I guess if there is a drop in range, I could just break off the plastic housing. I'm betting it won't matter if the cable itself is painted.

I was kind of thinking the same thing about the metalic paint.

I'm placing an order for an antenna like those now.

Staff member
Moderator
Mentor
#5
you could . . .

complicated, but if the paint hurts the range, it's a matter of pealing off the tape, and you're back to stock.
R

#6
I think it might affect it. I would speak to the vendor before trying something like that.

Staff member
Moderator
Mentor
#7
It's hard to say how bad a diaelectric will affect an antenna's tune in the nearfield (~2 wavelengths, but far more critical within 1), and for 5.8G, wavelength is ~2" (52mm). The OEM won't really be able to help (unless they've got a favorite brand to recommend), since the electrical properties of paints can vary WILDLY.

Metalic or conductive paint has a high chance of reflecting the wave back into the antenna (the effect is much more convoluted than this, but gives the basic idea), but "shiny metal looking" doesn't mean it can hold/reflect an EM field.

Plastic paints that close might generate dielectric effects too, but that close to a molded housing, it's probably not going to change much.

It should still work without the housing, but if it was built right, it was tuned with the housing on, so try and preserve it, if you can. This is why I recommend tape-then-paint to see if your chosen paint is going to wreck the performance *before* it becomes perminant.

#8
Metallic paint could easily serve as a Faraday cage. However, I'm pretty sure any paint that acrylic-based would be ok. But as was said, do a range test before flying any distance.

#9
Cyberdactyl said:
Metallic paint could easily serve as a Faraday cage. However, I'm pretty sure any paint that acrylic-based would be ok. But as was said, do a range test before flying any distance.
Click to expand...
What about an enamel based paint like the PAINTER'S® TOUCH ULTRA COVER 2X? I've had real good luck with this spray paint in other applications.

I do plan on doing a range test before actually flying. I like the painter's tape idea too, Craftydan.

#10
What about Plasti Dip? It's a rubberized style coating you can spray. If there are any negative effects from the coating, it can simply be peeled off the antenna. There are a few colors it comes in too if you don't want black. I would think this would be a non metallic or conductive coating.
http://www.homedepot.com/p/Performix-Brand-11-oz-Plasti-Dip-Black-Rubber-Coating-Spray-11203-6/100131010
R

When I want to test a paint for an antenna, I spray it on an inert object like a paper plate and then pop it into the microwave oven. If the paint stays cool it is RF transparent. If it heats up, don't use it.
Click to expand...

Mentor
#12
Dan pretty much nailed what I was going to say.

But I would add one other possible alternative. Dye. A surprising number of plastics can be dyed with fabric dye which may have less of a dielectric effect. I'm not sure what type of plastic they used so I'm not sure if it would even work...but a pack of black RIT dye is pretty cheap. Just get it good and hot and dunk the plastic for a few minutes and see if it takes.

I do have a set of those antennas (they look like the "neweer" ones sold on ebay - I got mine from emilyandlily on ebay) and the plastic housing isn't that hard to remove. I removed mine fairly easily by doing a flip a bit close to the ground and bouncing it off a bush (flew it out but had to go back to retrieve the cap for my antenna!)

#13
jhitsema, I don't have any dye but I do have 4 kids and one of them would probably end up spilling it all over the place.

I'm going to start with the microwave test on the spray paint. If that fails, I'll move on to plastidip. Worst case, I may just suck it up and buy some black antennas and call it good.

#14
You could also make a simple tube out of paper, spray it with the paint you want to use, close the top and bottom of the tube over the antenna and test the reception.
C

#15
kah00na said:
Would there be any negative affects of spray painting an antenna like these black so it better matches the miniquad? I'm thinking about some of the spray paint designed for plastic.
Click to expand...
Black is not a good color to choose, most black pigments contain carbon, which is conductive and RF absorptive.

If you are really stuck on painting the radome black, pull up the MSDS of the product that you intend to use and see if it contains Carbon Black, if it does you don't want to use it.

Mentor
#16
I install wireless equipment professionally: in-building WiFi and microwave point-to-point links mostly. It's common to paint the radome of outdoor radios to match the buildings they're on. Granted, I have never put the antenna in an anechoic chamber, but there is no noticeable effect that I have ever seen, as long as the paint isn't metallic. I would be really interested to see any range test results. In order to keep the results from being permanent, I would suggest the following protocol:

2. Test range with antenna with masking tape on it.

That way the results can be undone if needed, and the effect of the tape itself is controlled for. If additional rigor is desired, the antenna could be swapped on the transmitter, and an observer who didn't know what antenna was being used or what the current distance was could watch to see when the signal broke up. As an additional control, a standard dipole could be used, to help validate the observer: if the observer shows the dipole to have similar or more range than the CP, the experiment is invalidated.

Another approach might be to use a bluescreen display on purpose, since that will provide a consistent, objective measure of when signal has dropped to a certain level. Or, if one had an OSD with RSSI display, a blind observer wouldn't even be needed. One could just measure RSSI at a fixed distance.

It is worth pointing out that, due to the inverse square law, small effects on antenna pattern are magnified over distance, so one should ideally be at a relatively weak RSSI when one performs the testing.