#1
Hello FT forum! I'm new.
1st build was the Mini Sporster. Just enough to confirm my belief that hot glue doesn't want to be my friend.
Here's #2. See pics. (I haven't glued the vert stabilizers on yet, they're just sitting on there loose.)
I love the aggressive look of the thing, but I'll be generally restricted to rather small areas to fly, and I'm new to RC flight, so I want to see how slow it'll handle for me.
Wanted to keep the wing @ 24" or less (because... reasons,) so I tried to maximize wing chord and super-minimize weight and see what happens. I wanted the slimmest fuselage I could get away with so I wound up w/ hatches on the top.
Between the vert stabs it'll only fit up to a 6" prop, but I'm not trying for 100 mph or a 15 min flight time, and if I want I could put a bullnose tri-blade on there and get a lot of push without burning anything. To save a 3-blade, the stabilizers extend a bit below the belly - It won't land pretty but it won't break the prop either.
The nose is as long as it is because Geometry. And because a light 3-cell. And because Calculations. I don't ever want to get caught having to say "It just needs a heavier battery and it'll be fine."
So just wanted to share. I've done lots of other stuff over the years with balsa and ply and CA and exacto blades, but now it's time to fly. Looking forward to a bit nicer weather.
Any thoughts? Thank you all for being here. What a resource & what a community. 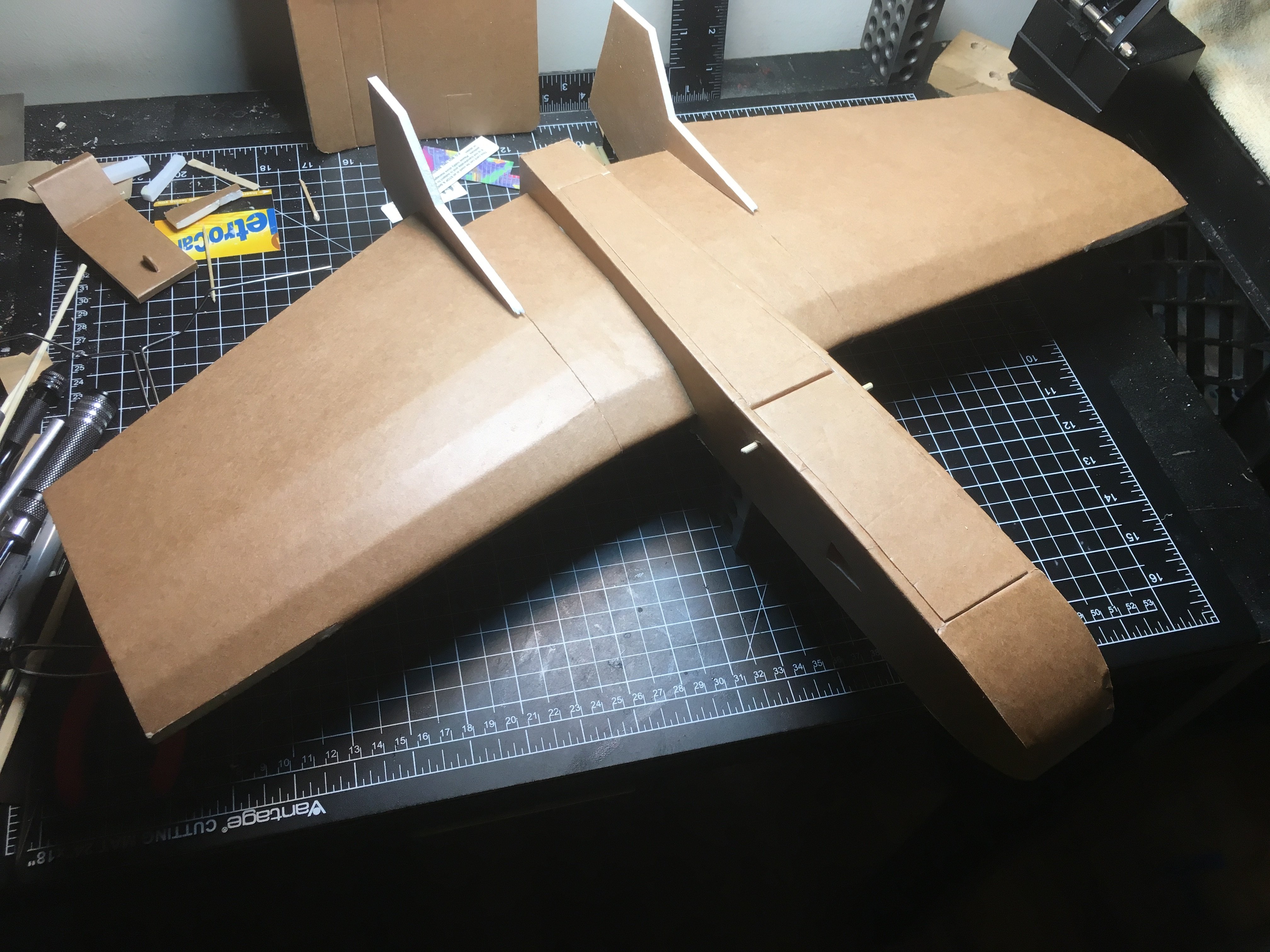 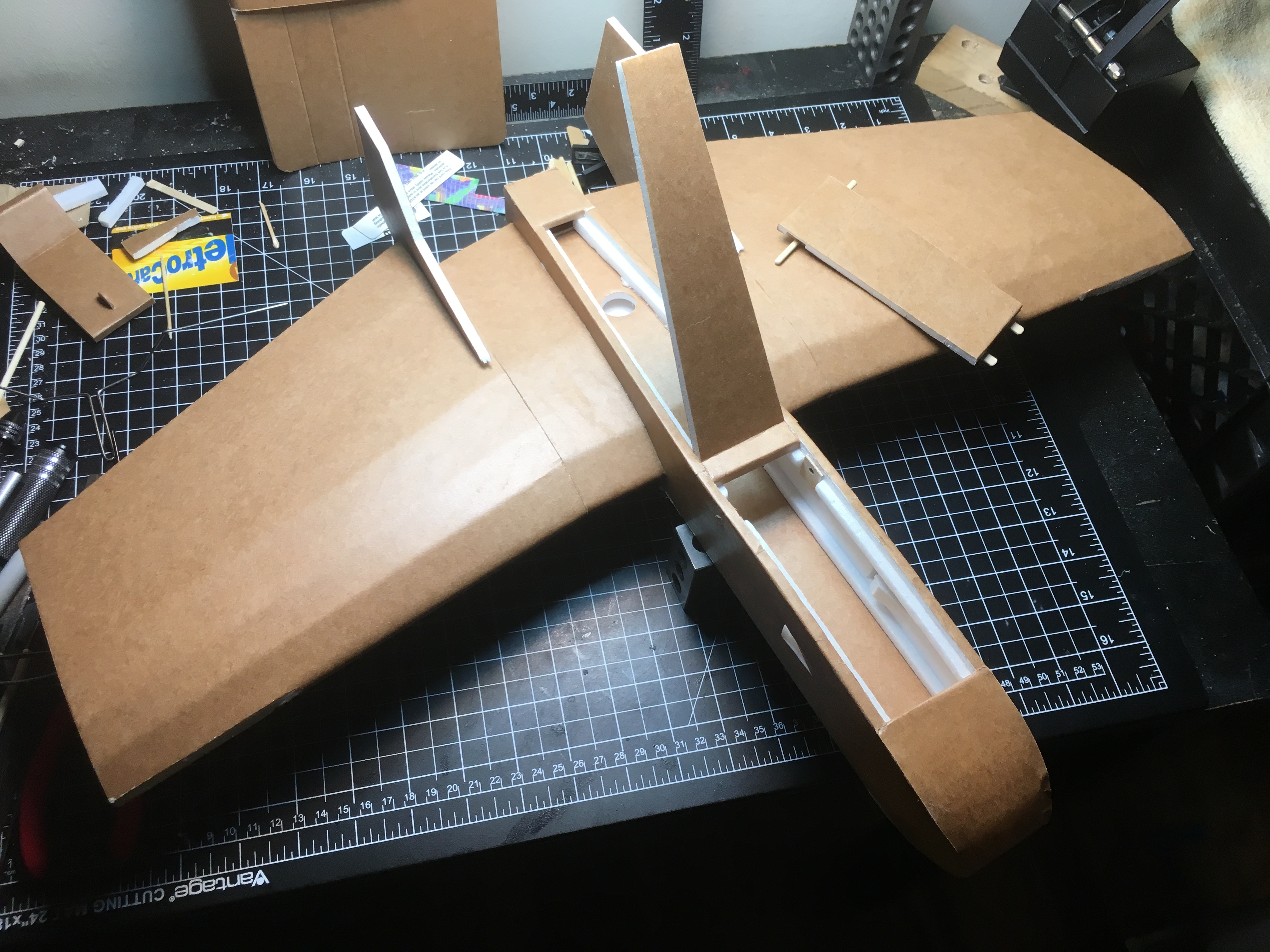 #2
Nice looking plane, if I had any comments I would say the vertical stabs look a little small but it looks super.

#3
That looks super sweet and I just noticed your hatch design with the sideways stick, which I've never seen before. Looking forward to seeing more about it! @CarolineTyler may be right about the size of the vstabs though, compared to other planks I've seen around here.

#5
CapnBry said:
That looks super sweet and I just noticed your hatch design with the sideways stick, which I've never seen before. Looking forward to seeing more about it! @CarolineTyler may be right about the size of the vstabs though, compared to other planks I've seen around here.
Click to expand...
CT and Cap'n thanks, you very well might be right, let's cross our fingers there's enough fin. (I invest so much into this sort of thing - I try to remind myself it's just a "cardboard" toy!) There's another third of the fin below the wing...

Cap'n, the skewer - you know, it's just like a power pod system. Then I recently saw Ben Harber do this for a wing tie down in his vid "Big Al's Cessna" and I was so excited because it resolved a design issue I had with my very-mini Bushwacker/Shrubsmacker. (Perhaps "Hedge Trimmer?) I very much don't want to do rubber bands so I was trying to access through a hatch and just glue down the wing. This is the perfect solution for me - I can remove the wing basically to make receiver connections (so I don't need servo wire extensions), but I can still change the battery through an easy front hatch. 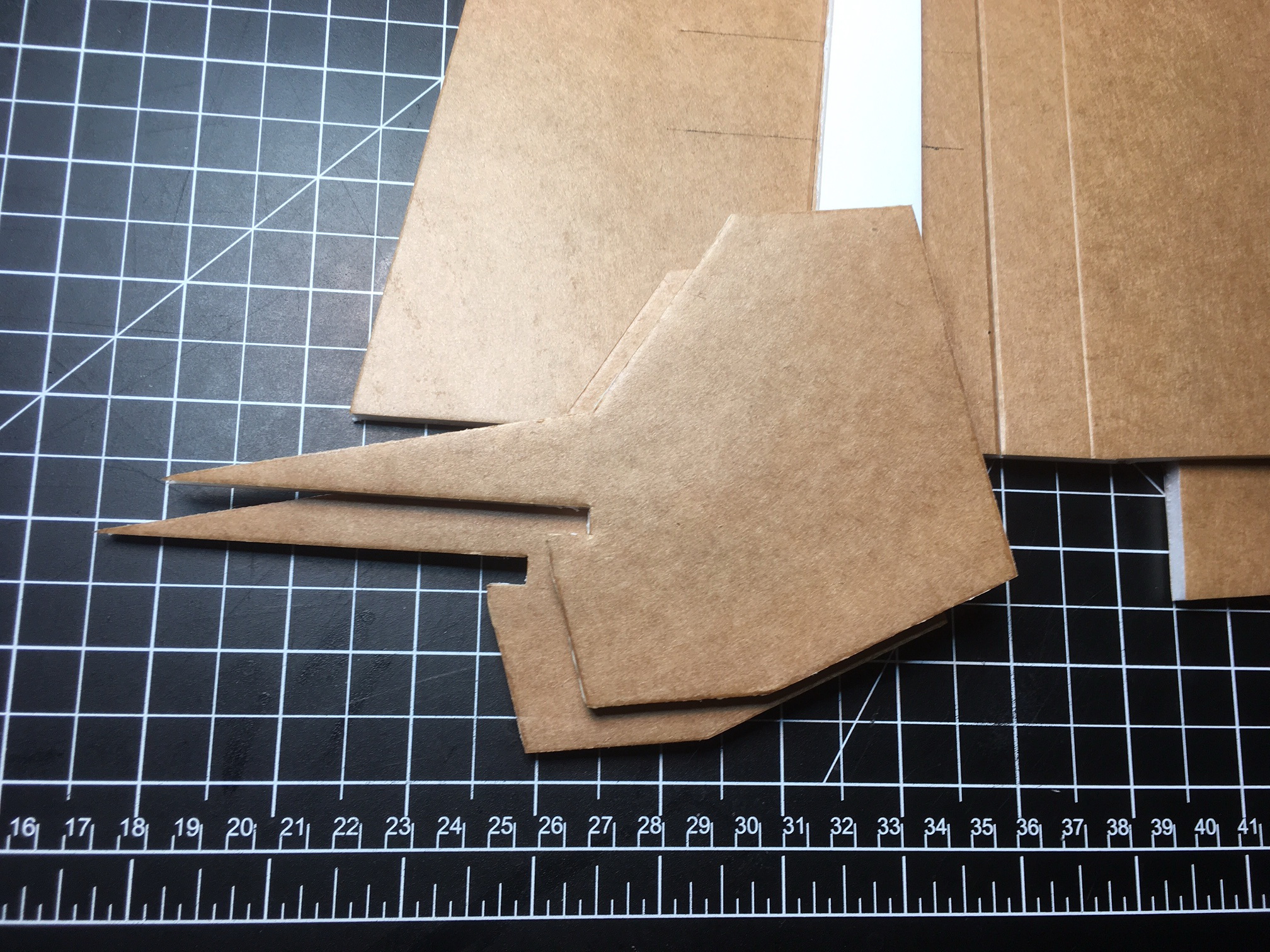 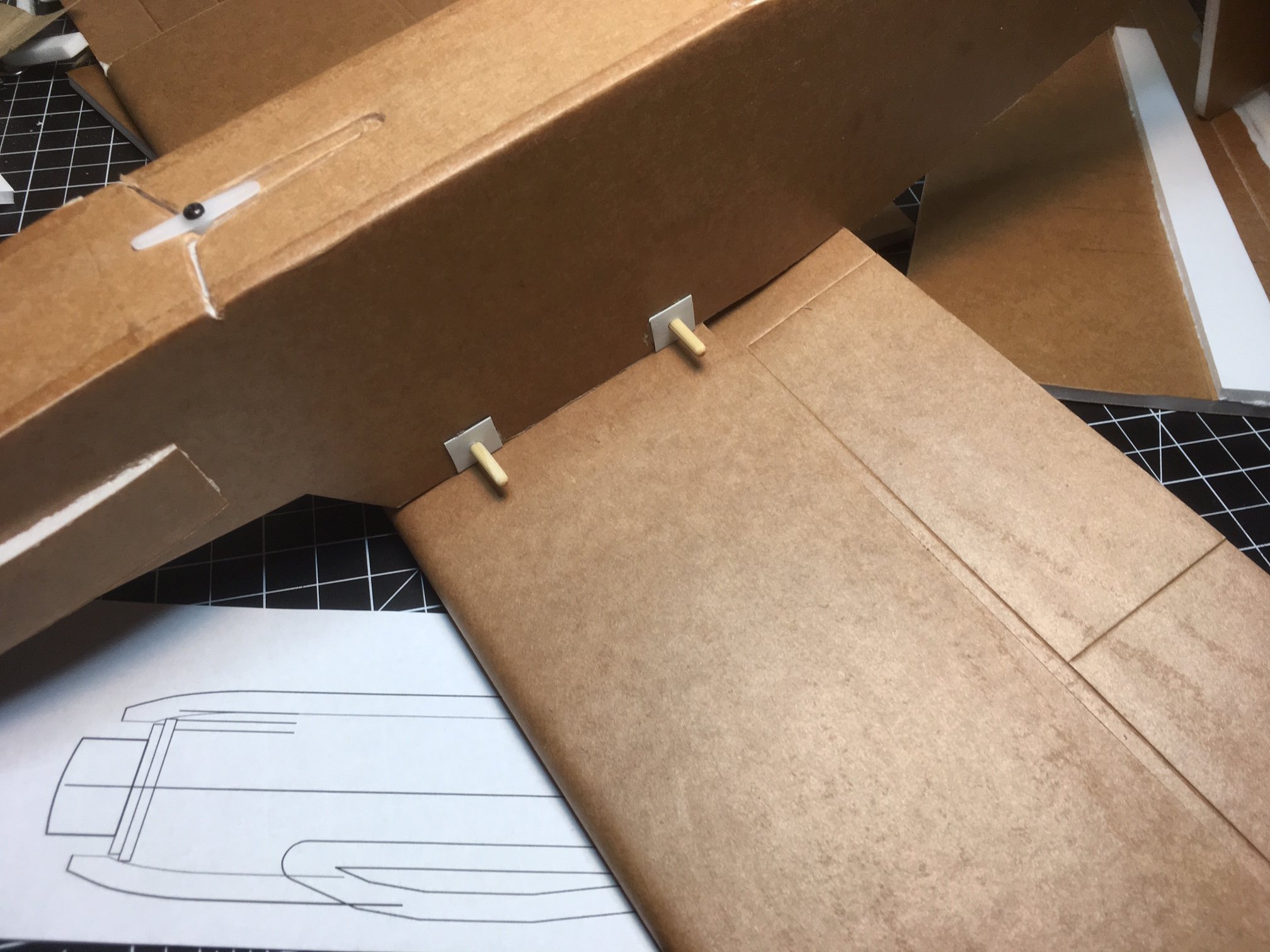 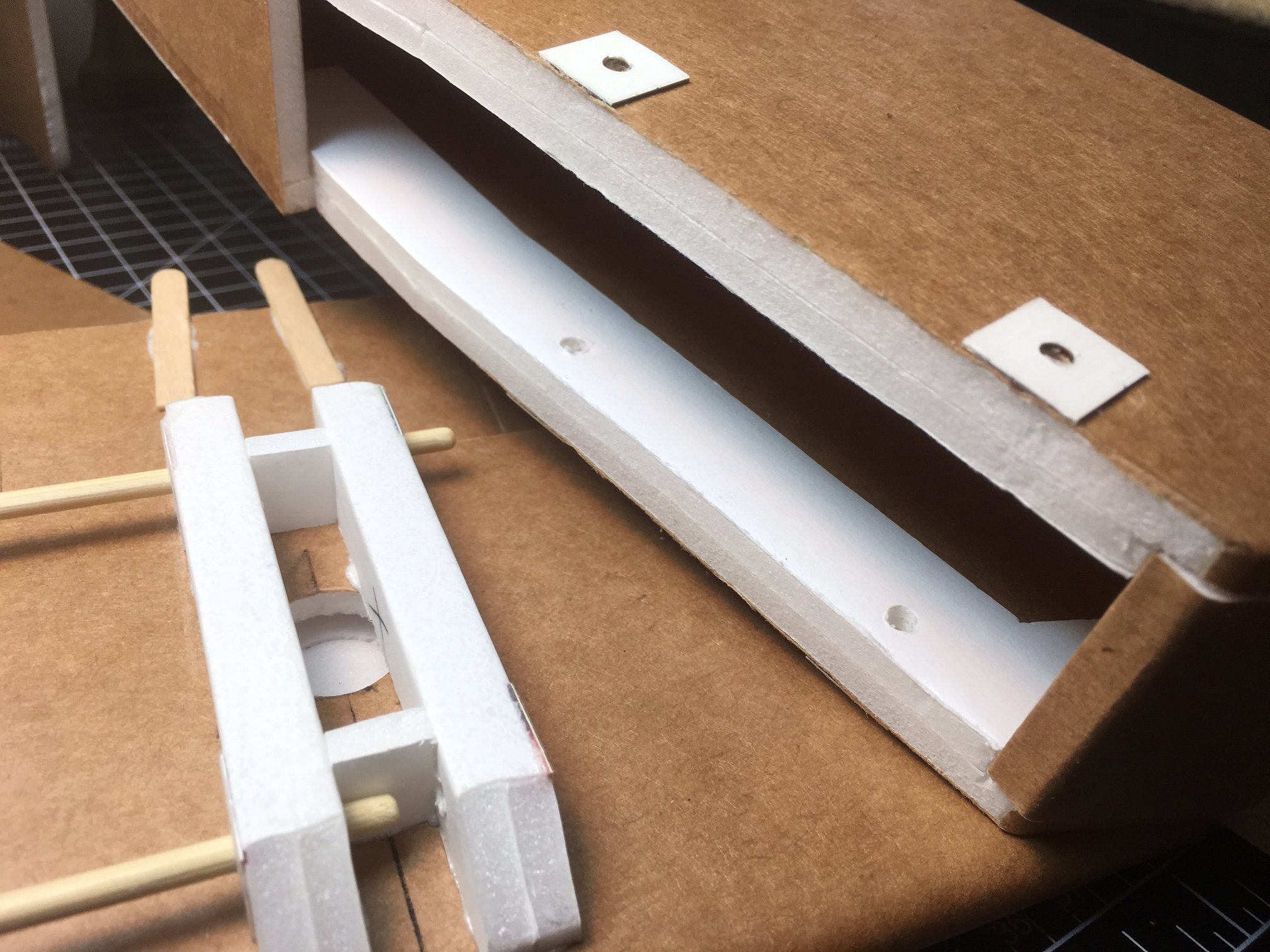