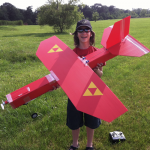 I've been meaning to post this article for quite some time. It's about my son and his first scratch build.

Since we started the show (Flite Test) it has taken over our basement, garage, attic, backyard, etc. So, needless to say, I got all kinds of crap laying around. My son, Christian, came to me one day and said "Dad, can I use this?" Hewas holding a very large piece of red coraplast. Cora plast is a corrugated plastic usually used in making temporary signs. It's a relatively light weight material for signs, but rather heavy for planes.

I said sure... What are you thinking about. He shrugged his shoulders and started cutting! I was already in the basement preparing for the next Flite Test episode, so I would glance over from time to time to see this mammoth marvel start to take shape. I could tell he wanted to do this mostly on his own, so I tried my best to guide gently from the sidelines. He just kept cutting away. He didn't ask me hardly any questions.

Once he started mounting the wing, I stepped in and explained the considerable importance of the center of gravity. I also glued a couple of fiberglass rods into the wing. You'll see why when you watch the maiden flight!

We pulled the radio equipment from one of my first R/C planes. It was a Tactic radio sustem out of the J3 Cub by Hobbico. We used a couple of hexTronik 9 gram servos for the rudder and elevator. We used a Turnigy 2217 860kv motor with a 12 x 3.8 slow fly prop. All this was powered by a 3S 2200 mAh LiPo pack.

He first called it the Improv 5000. I think it's because he made it up as he went along. But he has since re-dubbed it the Triforce due to his love of the Nintendo Zelda game series.

After getting all the electronics in we stepped back to look at it. I said "So, you think it'll fly?" Christian shrugged his shoulders and cocked his head sideways. "Let's go try it I said!"

David Windestaal was staying with us at the time and was happy to capture the maiden. Thank you David!

I am so proud of my son! He's now about 8 inches taller than he was in this video and he edits the majority of the Flite Test episodes. I hope you enjoyed this little slice of life from the Kapper family.

Mentor
#2
Cool! I'd like to meet him some day in the future To learn from him!

Moderator
#3
That is great! He obviously had watched you quite a bit if he was able to simply start cutting and putting it together. Congrats to Christian and you.
B

#4
You guys are a reality tv show now. we need more shows even if they are simple. keep up the good work
S

#5
WOW! Did you miss it big time. What a great episode this would have made. Great inspiration for the younger ones, and maybe us not so quite young. Great story line.

How many letters do we ge

#6
Awesome NERF armory in the background there.

We have a similar gun-rack in the boys' bedroom containing enough firepower to rain foam on any unsuspecting target at a rate exceeding 4 darts a second.

Awesome first scratch build also... I have to admit as a dad I can't help getting in there and 'helping' (read take over) with similar projects! Must step back and let them learn.

#7
Brilliant project, and I agree with glydr - learning from the mistakes and the character building aspect that comes along with overcoming failures is worth it's weight in gold further down the line in life.

Congrats on such a successful maiden!

How many letters do we ge

#8
Yup, my wife and I often say 'Its the process, not the product'.

#9
Is the maiden video posted somewhere? I would love to see it.

Mentor
#10
DejaD said:
Is the maiden video posted somewhere? I would love to see it.
Click to expand...
http://flitetest.com/articles/Triforce_Coraplast_Plane

#11
Good job Christian! Chad I think some sort of glare filter may be needed if you are going to show your legs on screen again. LOL
Con

#12
Thanks, Colorex. I found it, but forgot to update this thread. That's a pretty darned good attempt for a "off the top of his head build". Nice work Christian.
Last edited: Jun 1, 2012

Admin
Moderator
Mentor
#13
con244 said:
Good job Christian! Chad I think some sort of glare filter may be needed if you are going to show your legs on screen again. LOL
Con
Click to expand...
Wow! you're right. I hope it didn't hurt your eyes