#41
@flyboa - my original board was 6mm but recently I switched to Adams FB which I just checked and is probably a good 5mm as you say! I’ll try a few test bends to dip my toe in the water. Ordered some smaller servos and battery too! If it all works out I’ll build the 1.5 m DLG along the lines of your babies! Gives me some time to get parts like the C/F boom!

#42
Here is my demo idea for my wing. It’s kind of ‘flyboa’ but it is folded and taped. One side only is sanded to form the top surface curve when glued. The small 5mm bevel helps form the nose shape! I lost a bit of length over the top surface when folding so I would need to increase the 30mm section to 35mm to get back to my target size.

What do you guys think? 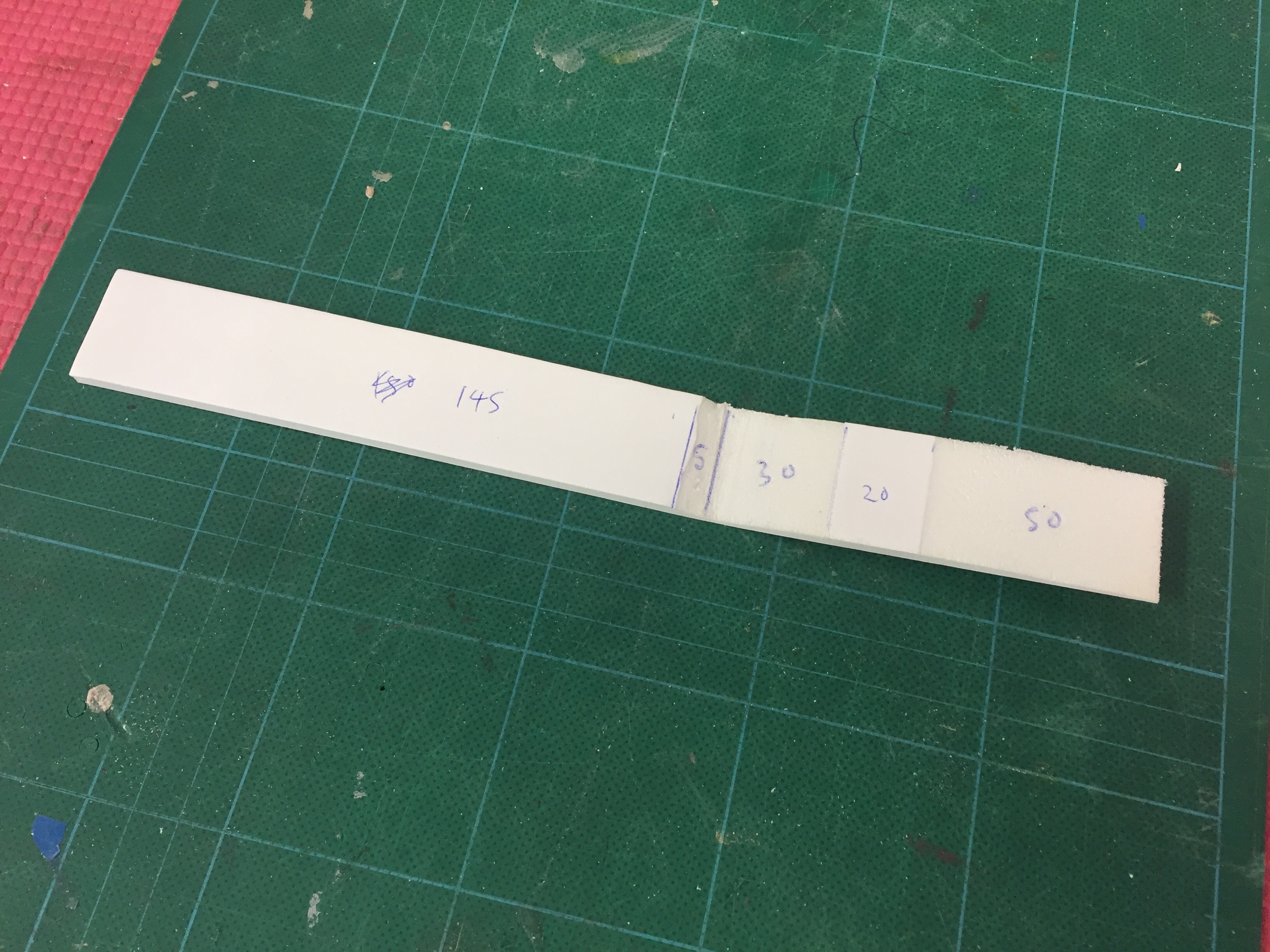 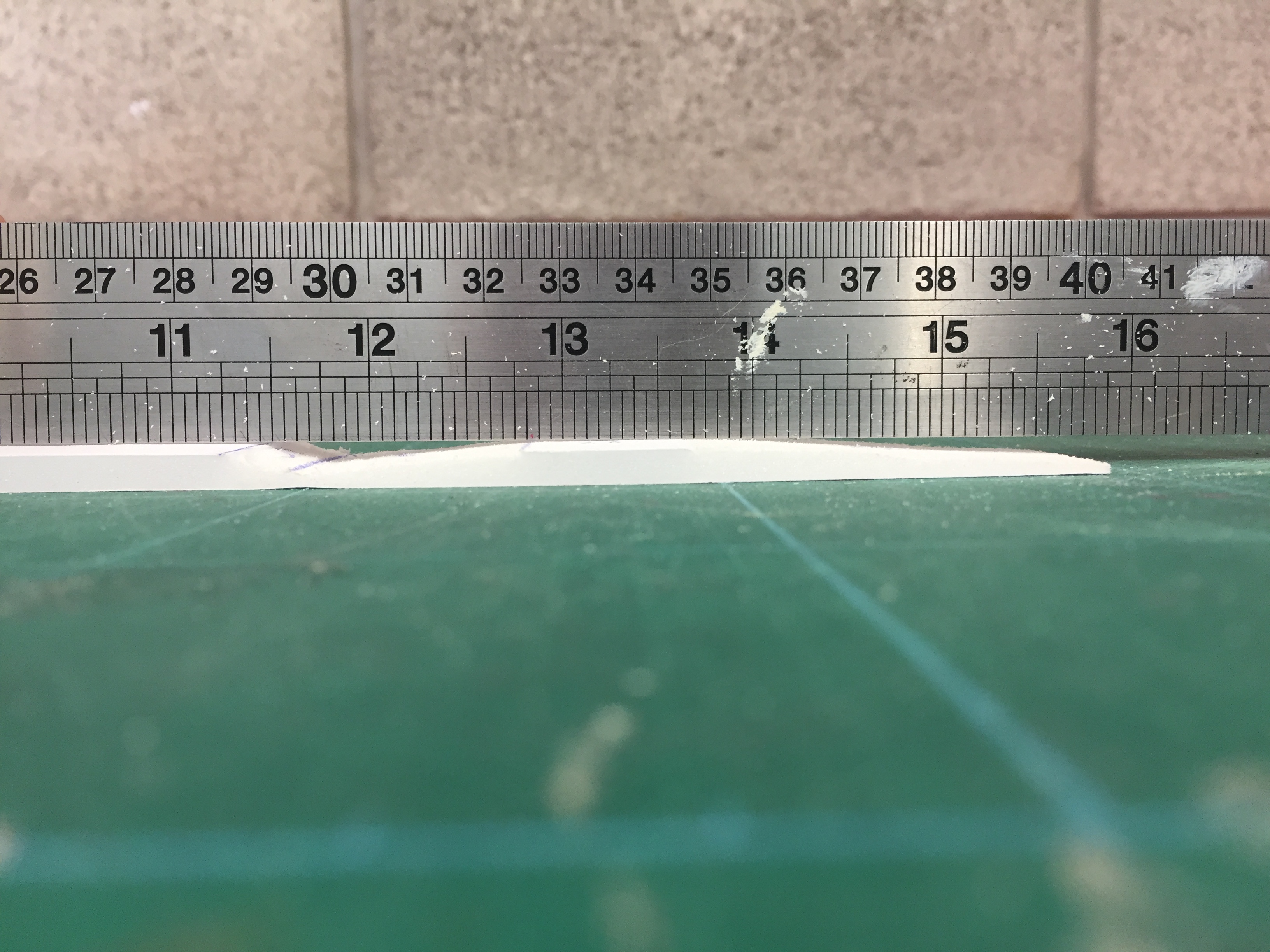 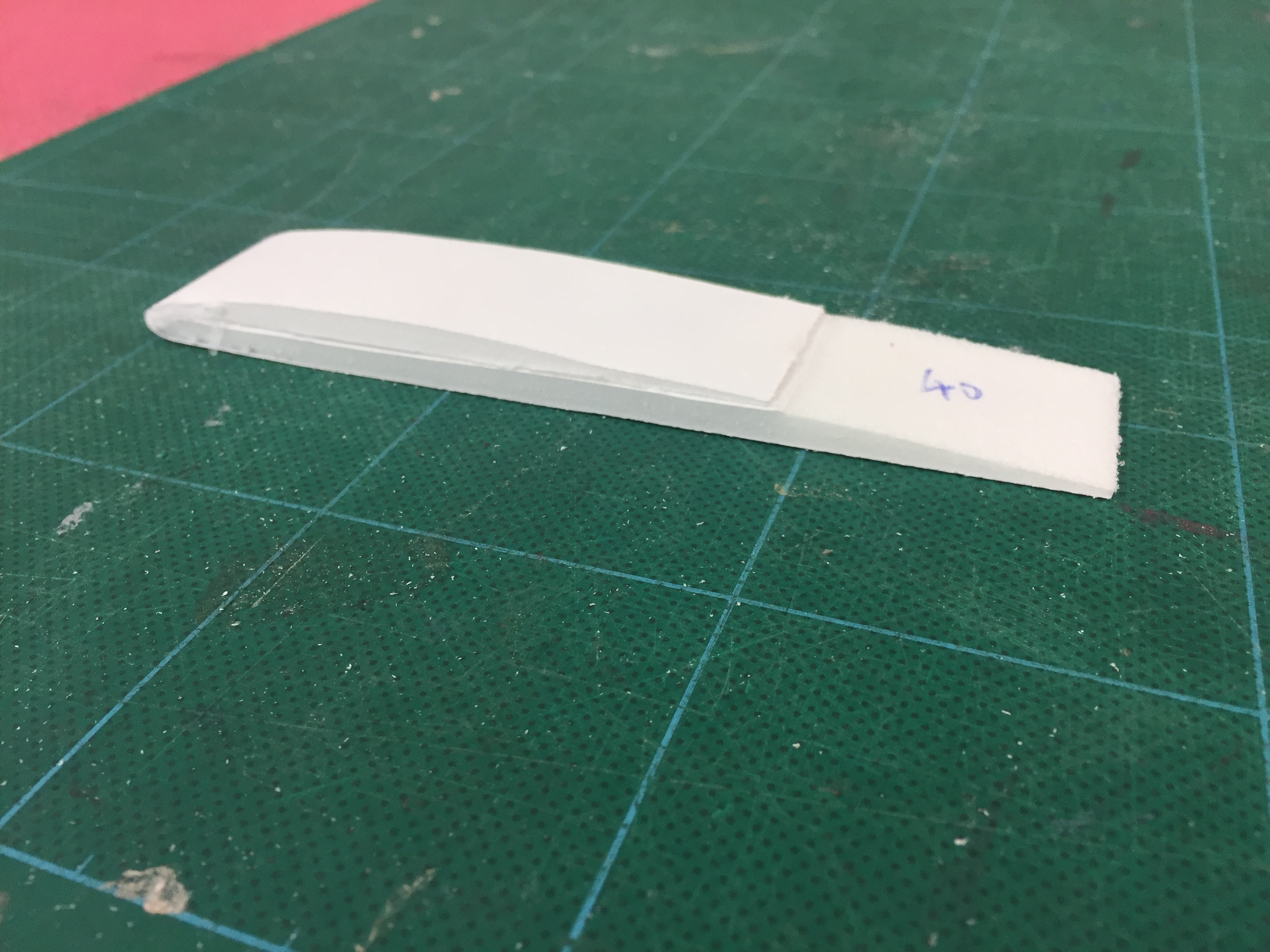 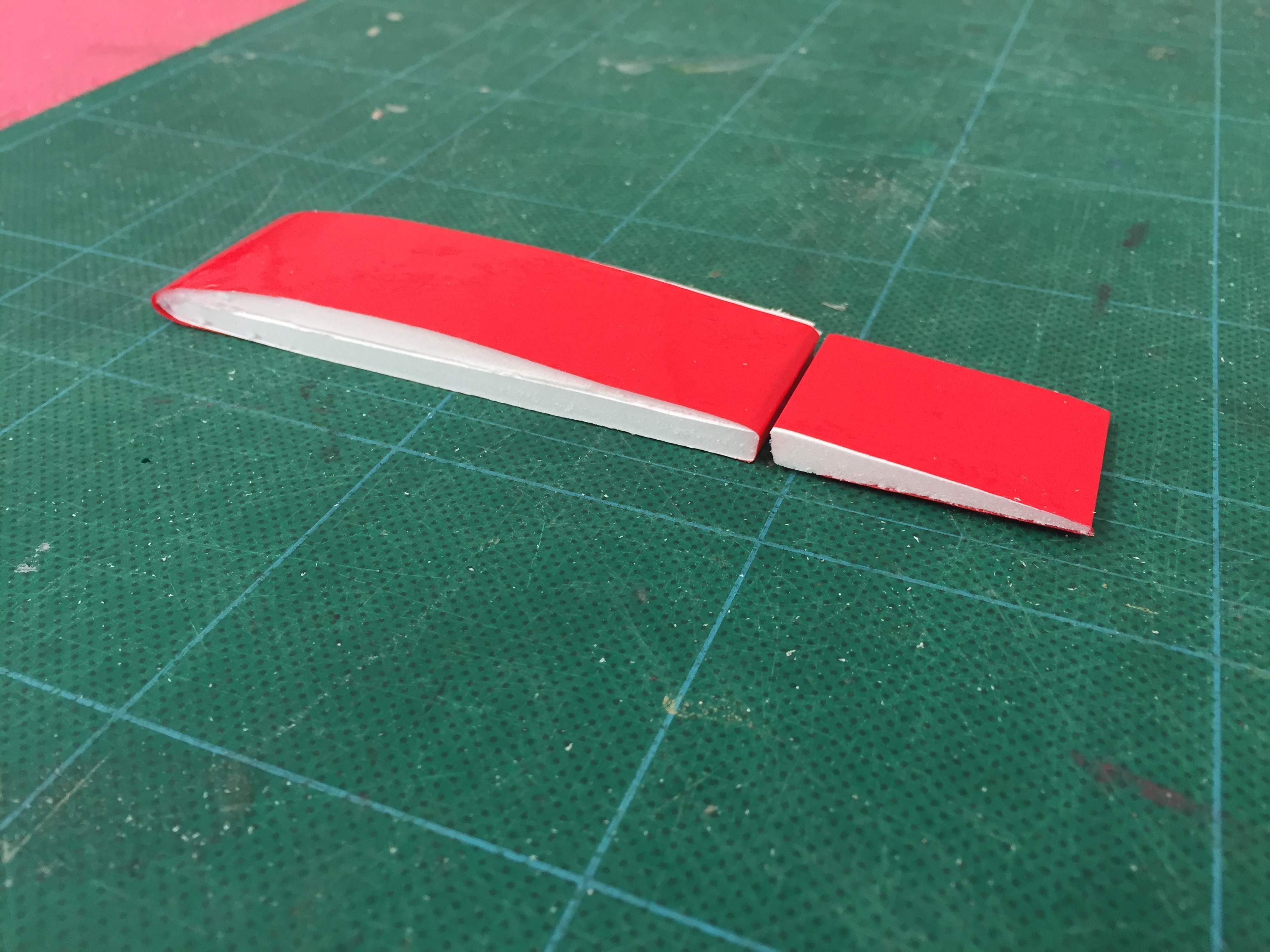 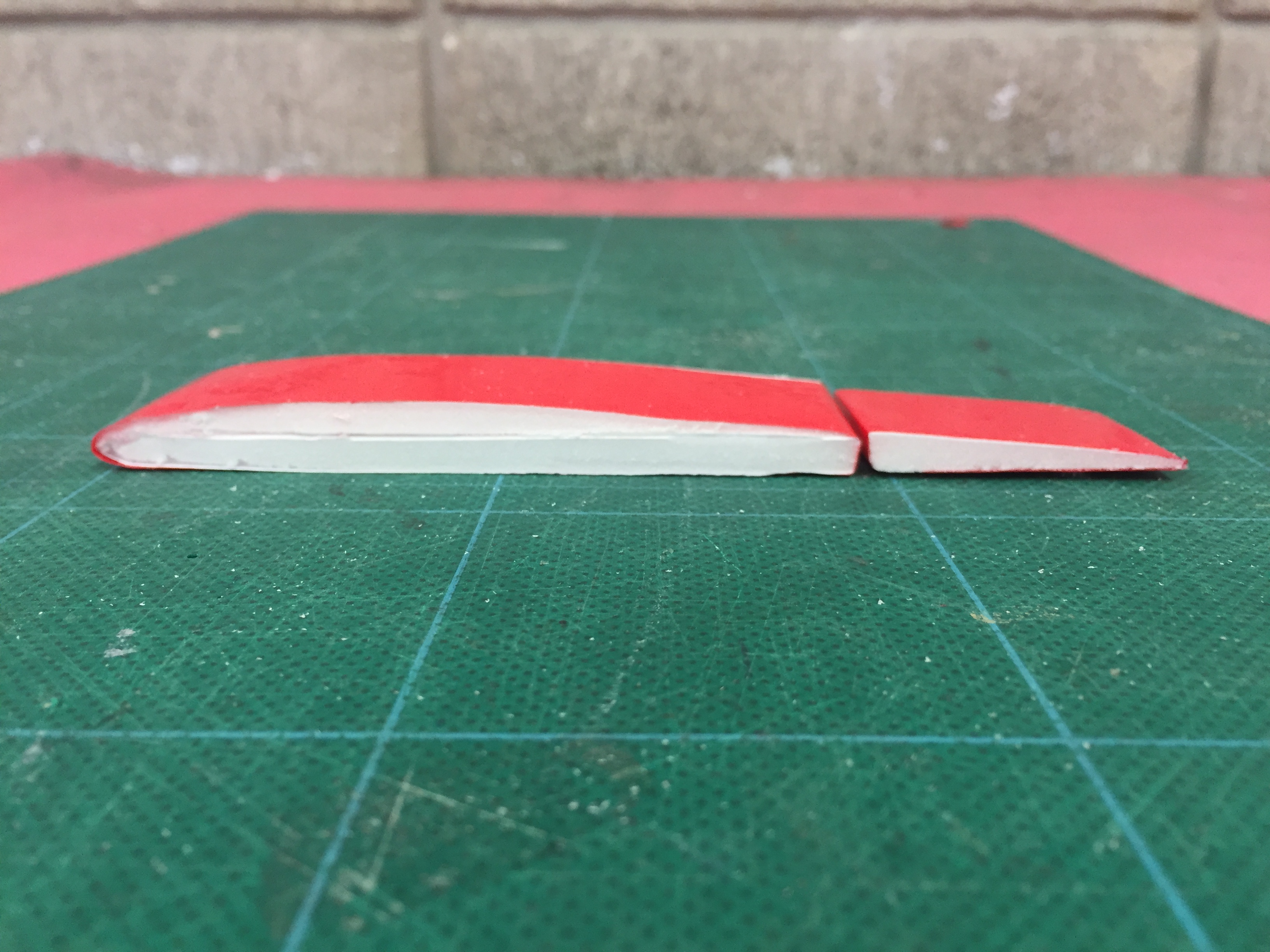 #43
I found it difficult to add taper from root to tip when folding the leading edge. A simple laminated two layer foam also alows an eliptical design which seems to fly better at slow speeds.

Paper on the inside does not add much strength an only adds weight.

#44
I forgot to take the inside paper off! How about glue - are you using a spray glue or still using hot melt? I was thinking today to make a hot wire to do the basic profile shaping before a light sanding.
F

#45
I like this original Gorilla glue lately. Takes longer to set than hot glue but it allows for adjustments before it sets and it is sandable.

I prefer just sanding. Hot wire cutting gets complicated and makes it harder to sand. 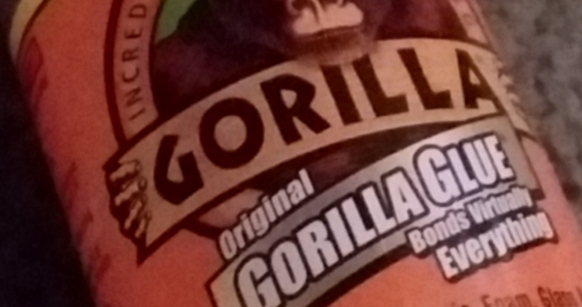 #47
Yes, just a quick hand sanding. I do have leading edge templates but I can usually just guess a good enough look.

#48
This is my updated CAD for my V tail TT with a 'flyboa' thin wing structure - aileron servos will need to be in the fuse for this wing!

@flyboa - I have started CAD work on my 1.2m DLG in your honour! 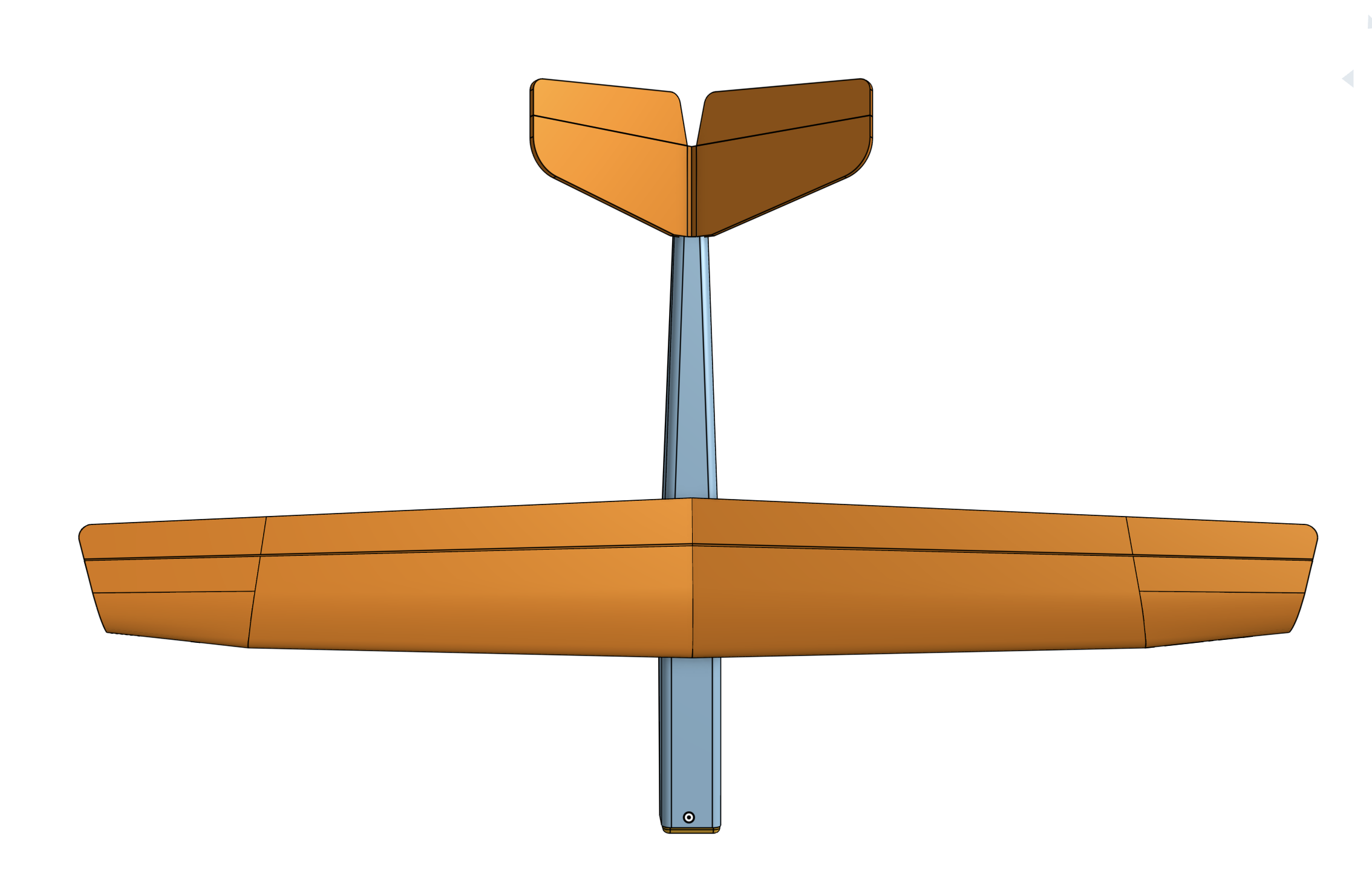 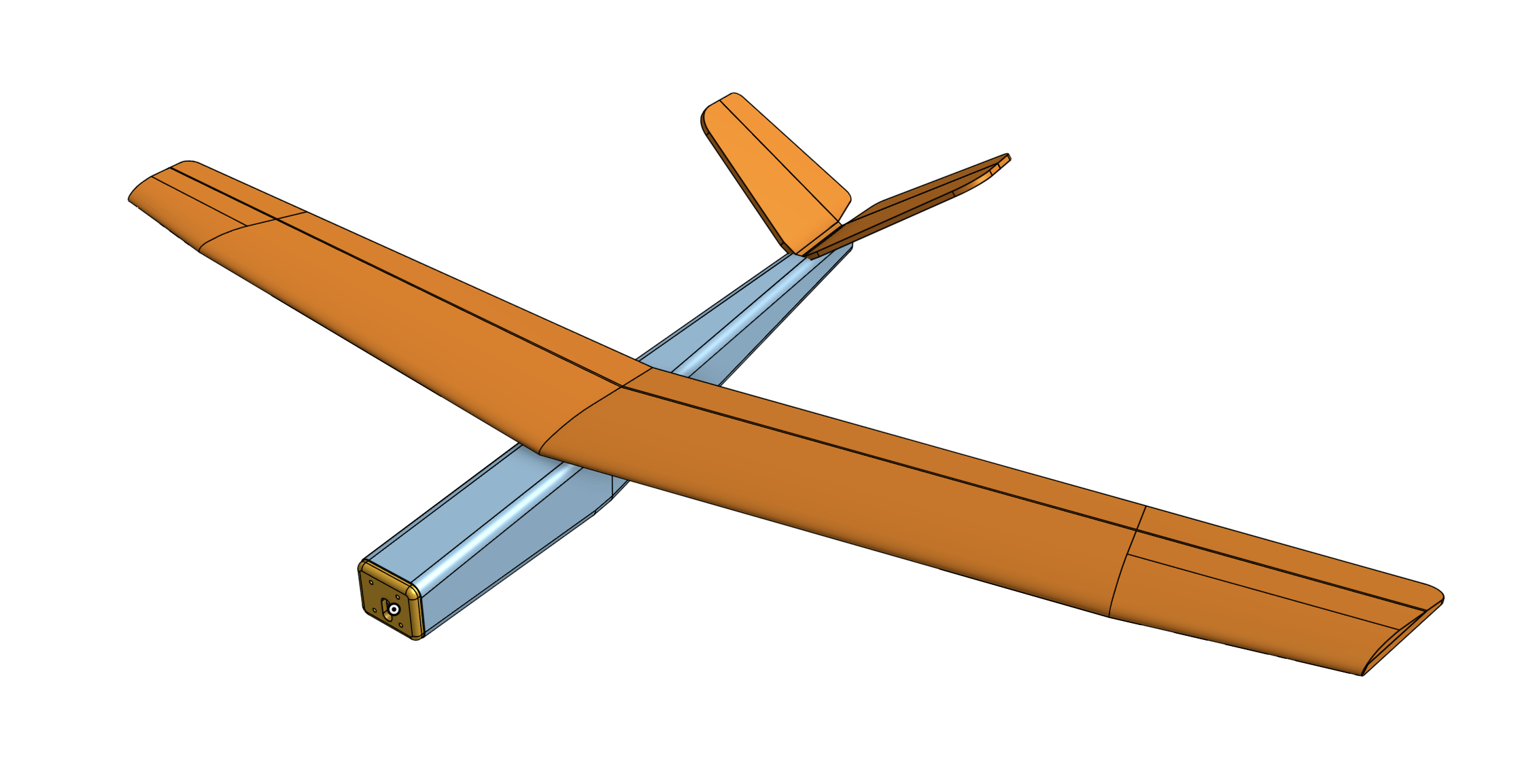 #50
bracesport said:
@FAI-F1D - I am happy to let that airframe go - bit out of my league! It’s in pretty good condition I bought it second hand when I saw one fly - what a noise it makes when firing overhead at speed! Do you realise I’m in New Zealand? 😆 How about we trade for something? Got any DLGs laying around?
Click to expand...
Dang. Didn't realize you were out of country. I'd be open to a DLG trade but I've been burned by too many damaged airplanes in international shipping. Your bird is beautiful and I'd rather see it risked by flying than by being squished by careless customs agents.

#52
bracesport said:
@FAI-F1D - a nice reinforced box should do the trick. It would be 1.5m long. You could return send it with your bird!! Let’s think on it no rush!
Click to expand...
I'd have to think very, very long and hard before doing something like that again. Canadian customs dropped an irreplaceable Stratair Xray in a puddle for two weeks, warping the wing and tail beyond repair as the packing material sank down around it. That was two years ago and I haven't shipped a DLG out of country since.

#53
Finally got the hardware to sort the brother-in-law laws TT. Once that’s in I’ll have two down and one to go.

Ran out of FB for the wing build of the V tail TT so I’ll need to plan a trip to top up! 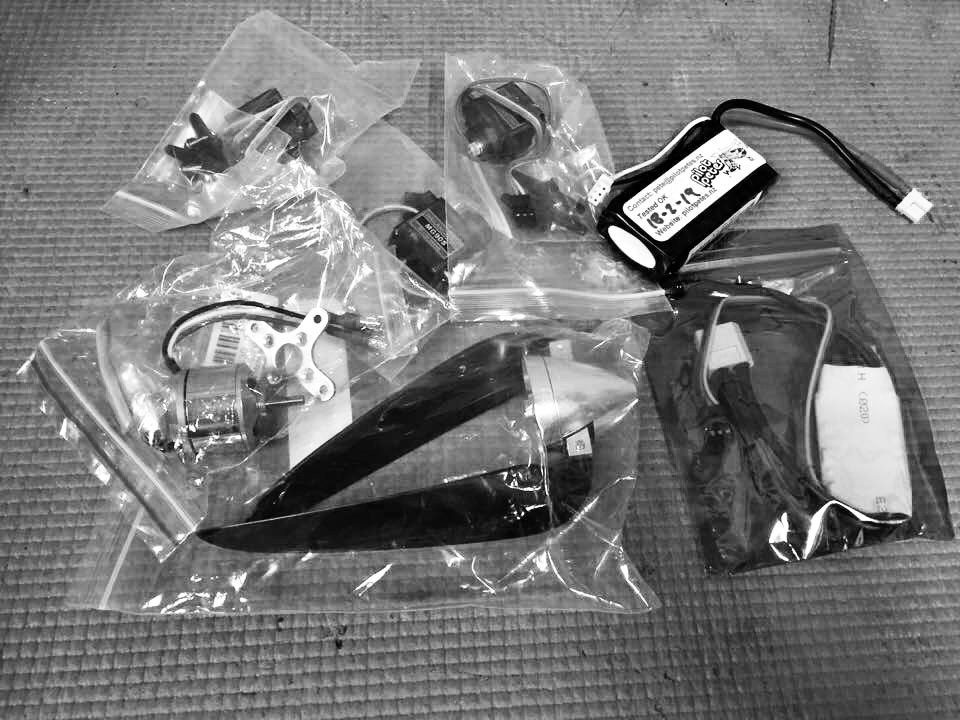 #54
Two ready to fly! One with rudder/elevator and one with ailerons/elevator. Third one still under construction, but hopefully I will get some more time in tomorrow! 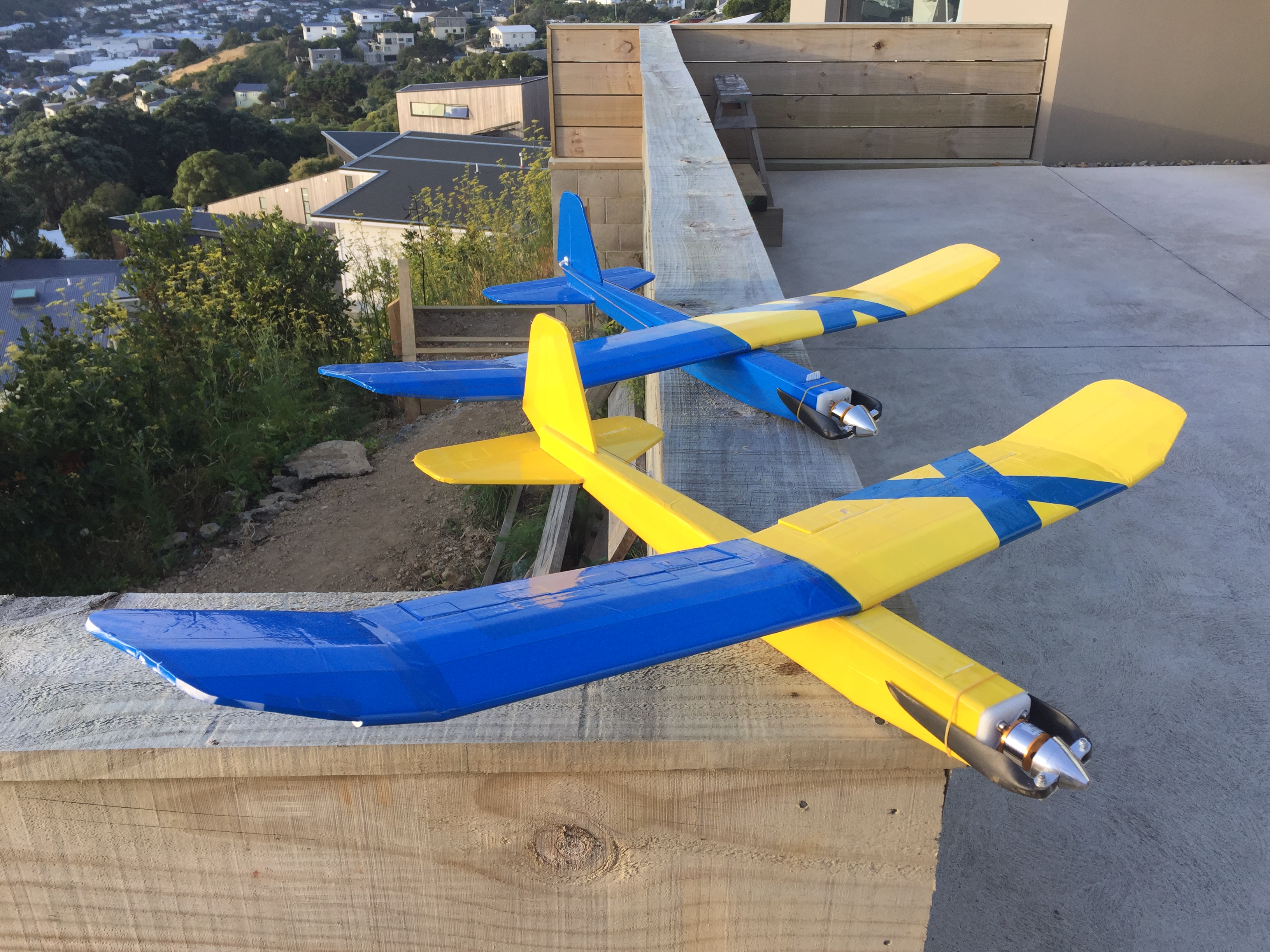 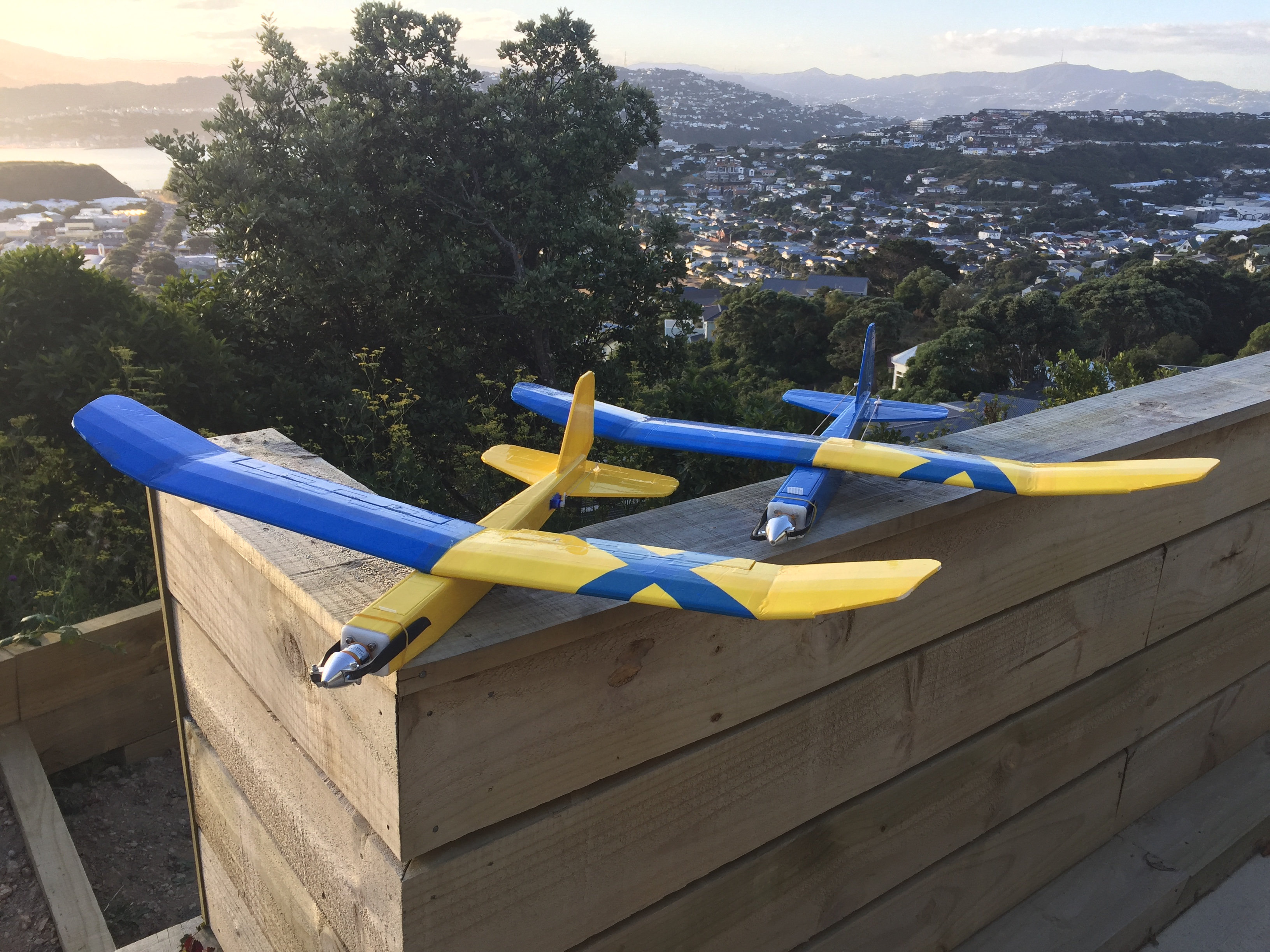 #55
I made a start with my thin wing for the V tail TT using my folding method combined with flyboa's gorilla glue. My idea with the fold allows me to tape the wing before construction. We have too much moisture here to have 'uncovered' wings - I'm using 3hr gorilla glue, but sadly I had to go to work! I only glued one fold as a test, so I am keen to see how it goes b4 moving on!

The template shown below is a WIP, and If it goes well I’ll try this method on a bigger wing for my DLG project! Otherwise, I will go with flyboa's DLG technique and then 'post' tape the surfaces. 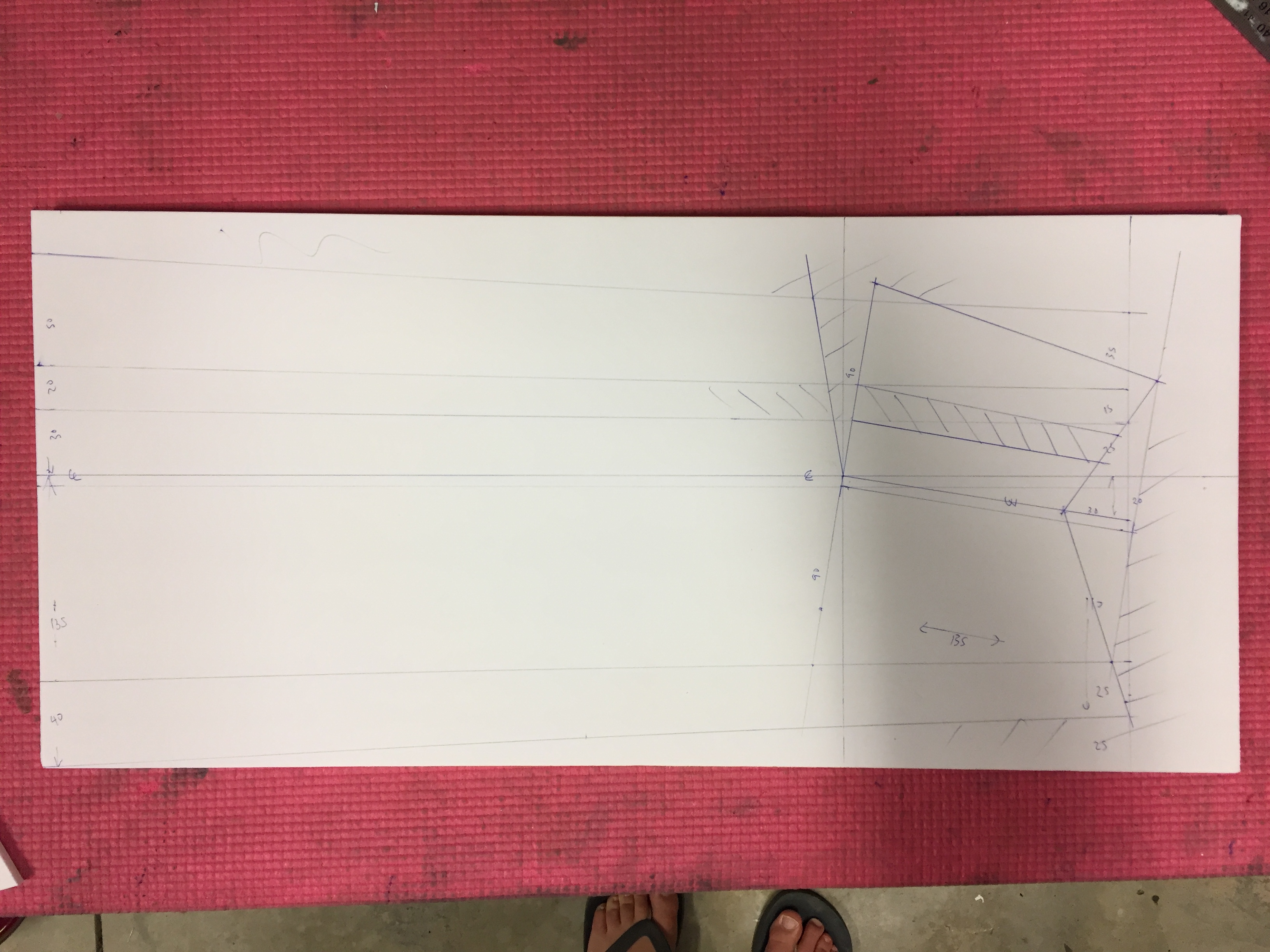 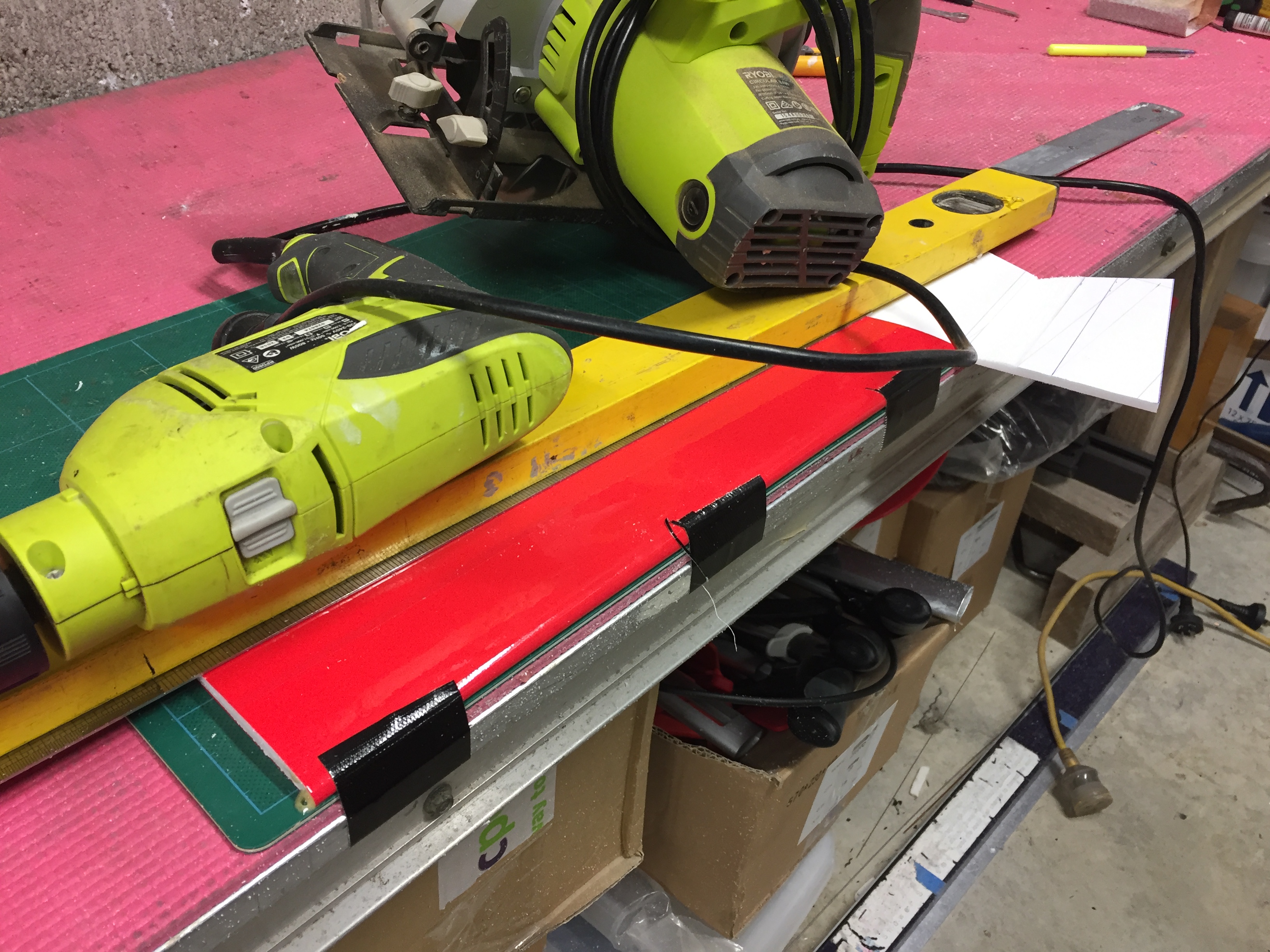 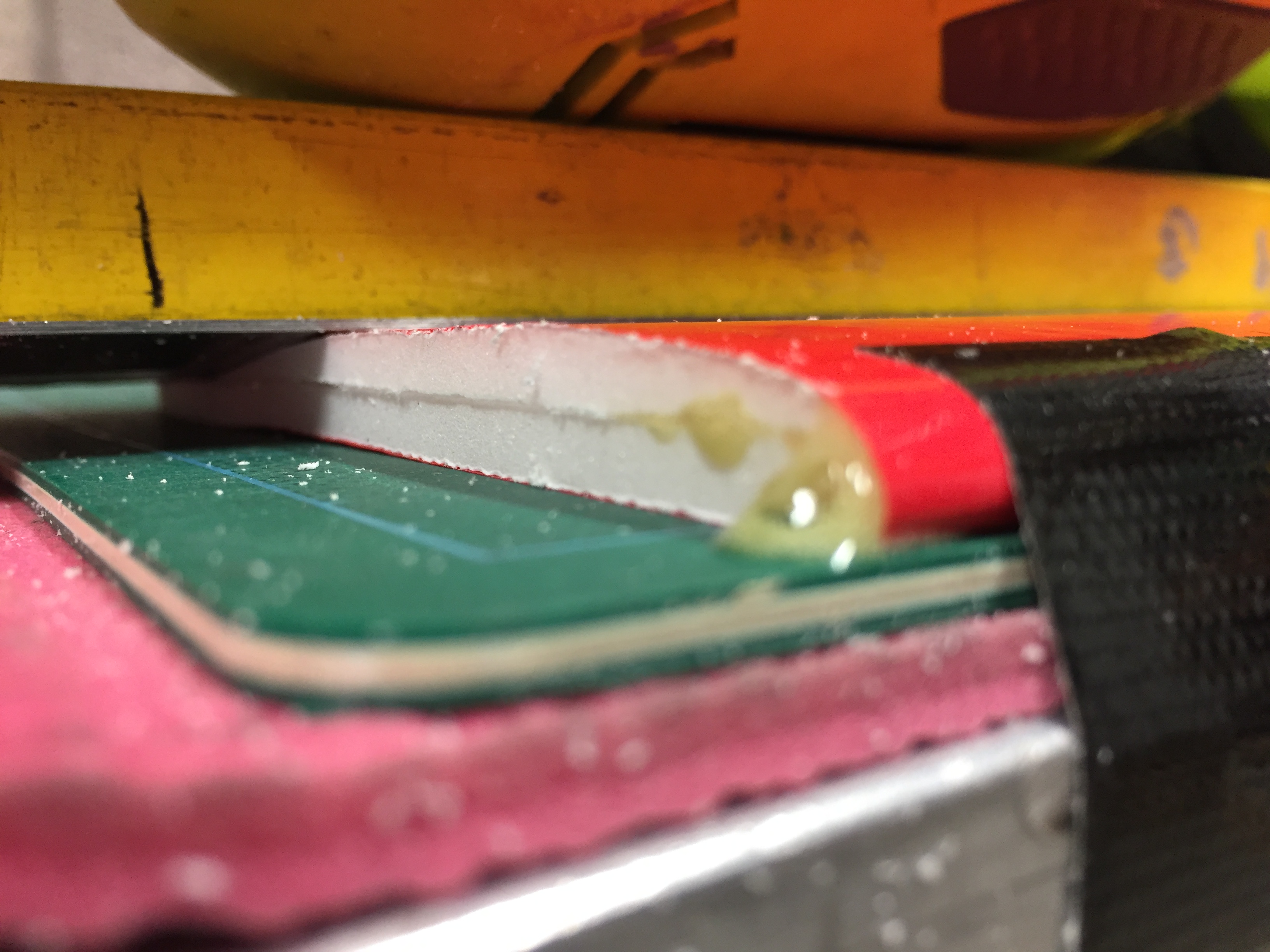 #56
The folded and glued wing turned out quite well for the first attempt - A couple of tweaks required to the template and then hopefully I will make a nice wing! 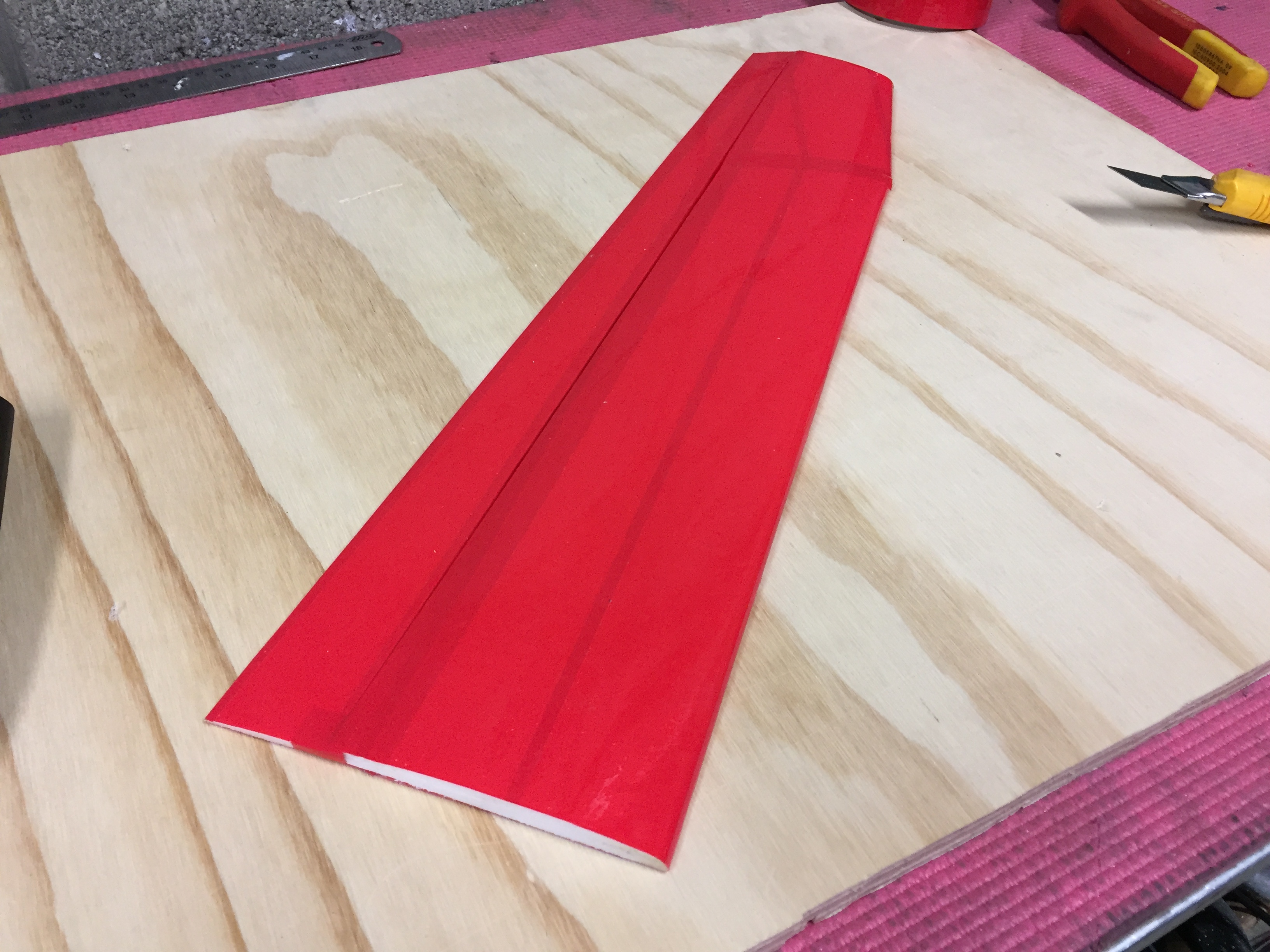 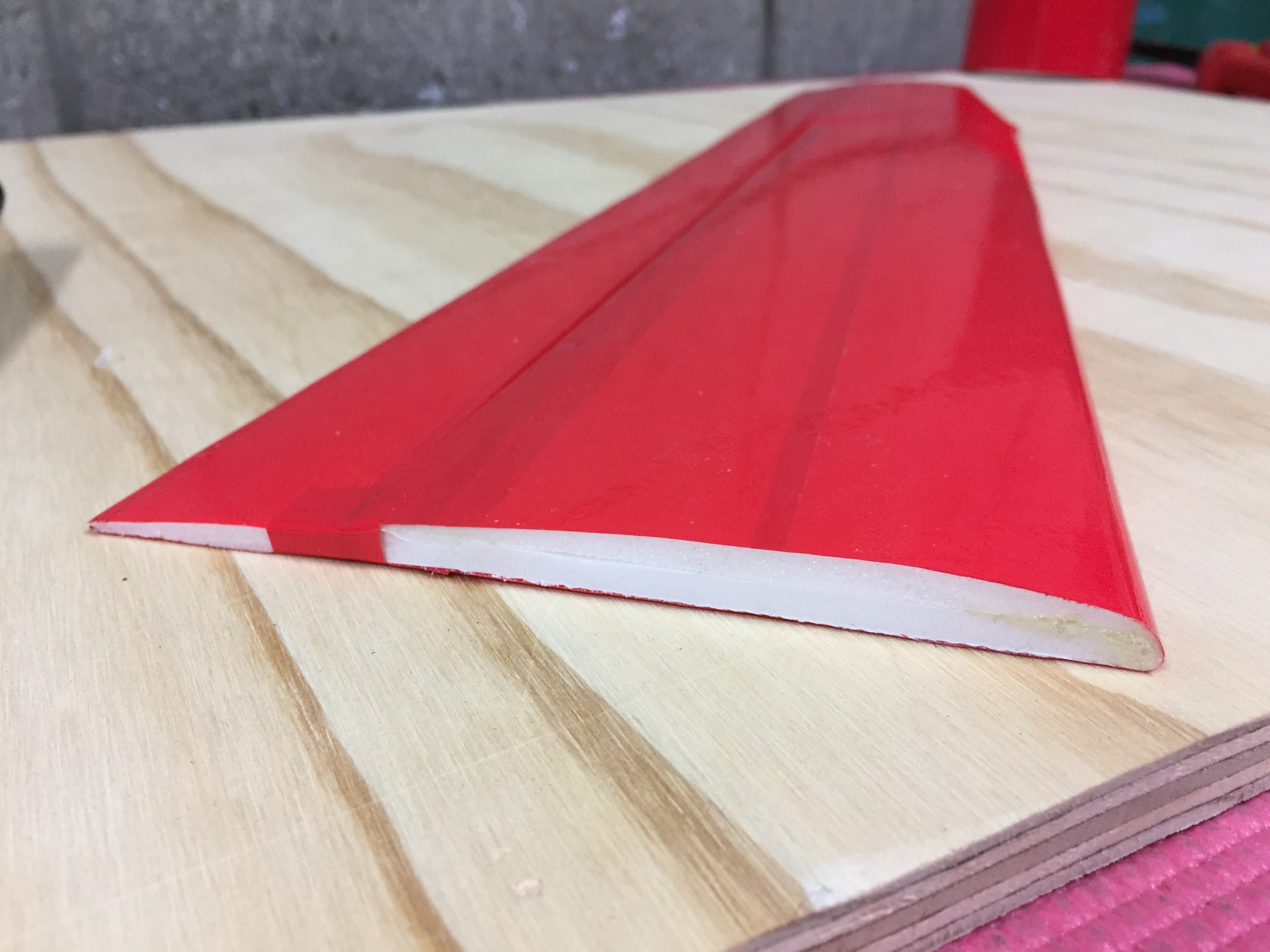 #57
@bracesport That looks good. Looking forward to the flight report.

#58
So today we attempted to fly four planes - it was a tad optimistic!

I wanted to get Uncle Kri's TT in the air as a priority. Kri has had 40 yrs off from RC but did really well flying his maidens. He was timid on the throttle which meant his flights were a tad short, but there was no damage to the TT! We had Xander on the camera (5yrs old) so we didn't get much useful footage, but the TT flew really well into a light breeze - 1000kv motor, 10x5 folding prop, and a 1300mAh 2 cell.

I had my Vista and the second TT in the car but we had some hiccups with binding the Rx so we had to pack it in with our tails between our legs. I expect I had the ESC lead to the Rx round the wrong way!