#1
One of my old flying buddies, Lee Woodworth, has a really cool old flying wing called the "Gull". He designed it with his son ages ago and it manages a truly unlimited flight envelope from a relatively simple and elegant design. Here are some old videos to see what I mean:

some great footage Brian got with his racing quad a few years ago. That's Lee, Brian, and myself standing at the flight line.

a noon demo flight from Wingbusters' 2012 open house. Really shows how wide the speed envelope is.


So I've got a few unfinished long-term projects waiting around and not much time or willpower to finish them this flying season. The real goal of this project is to get a plane from the drawing board into the air in under a week using old components I have laying around along with foam and 3D printed parts. I'll be making a small wing spanning about 25 3/4" and a length of about 28". Even at this size it will have over 700 square inches (~45 dm^2 ) of wing area so I'll have a lot of weight allowance to play with. This should come in handy for stage two, where I'll be adding either floats or a pontoon with hydrofoils.


Alright, here's a crude render of the design:

To save time I've only designed/rendered the foam and 3D printed parts, as well as the propeller arcs since I'll want to see those when it comes time to design the float setup. I'm also redesigning the trailing edge of the elevons a bit to add more induced drag for dynamic stability. Yaw stability won't be great, but crosswind performance (and spins) should be excellent.

Updates to come. This should be a quick build.

#2
I made some 3D printed stencils for the wing, stabilizer, rudder, and elevon formers, and then cut out the pieces from FT foamboard. 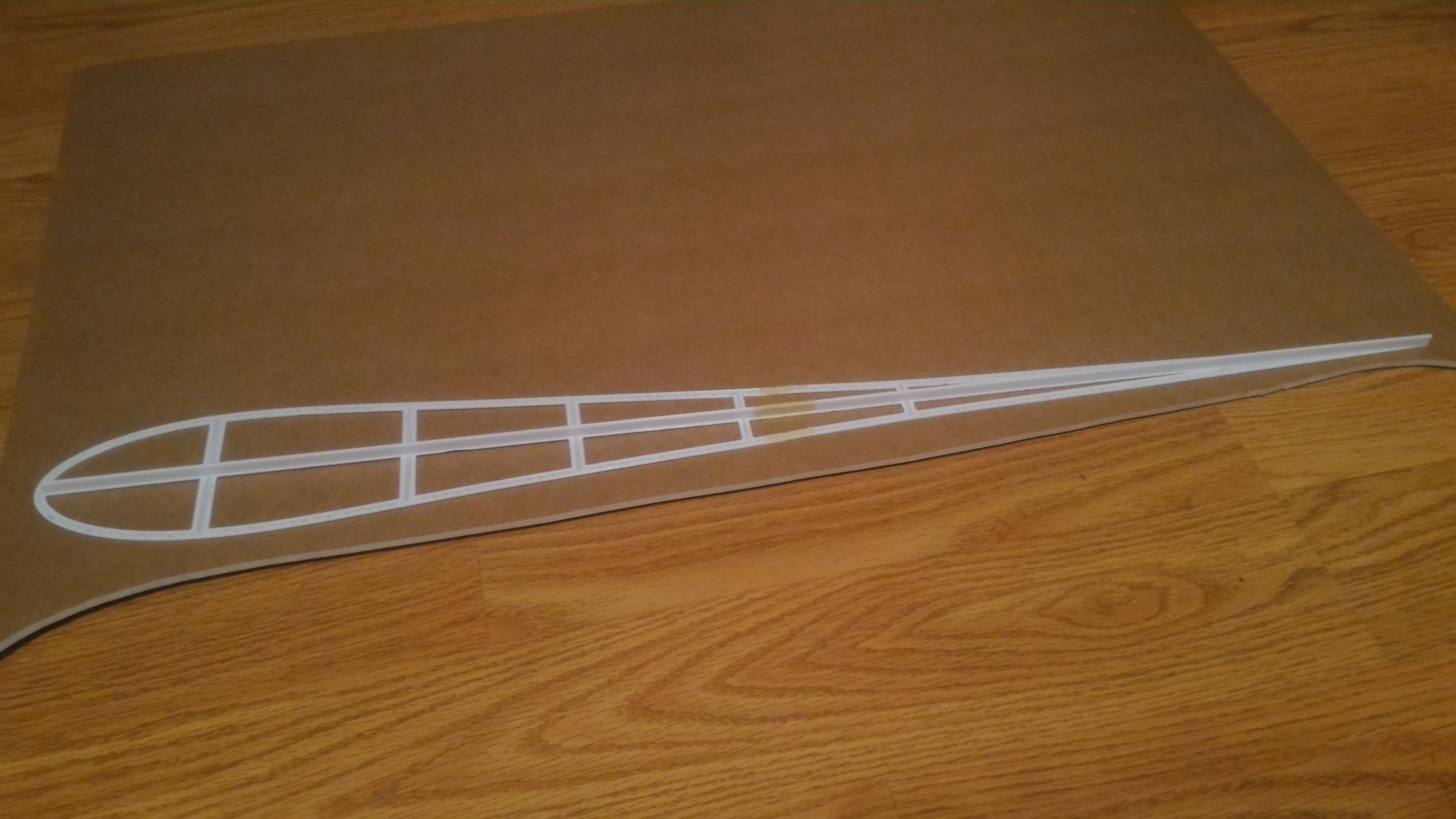 I really liked this method, actually. It's so much faster than exporting and converting the .dxf files into .pdf and rasterizing, printing, taping together, etc. the build plans. Once these were cut out I started gluing together the formers/ribs around the 3D printed battery tray. 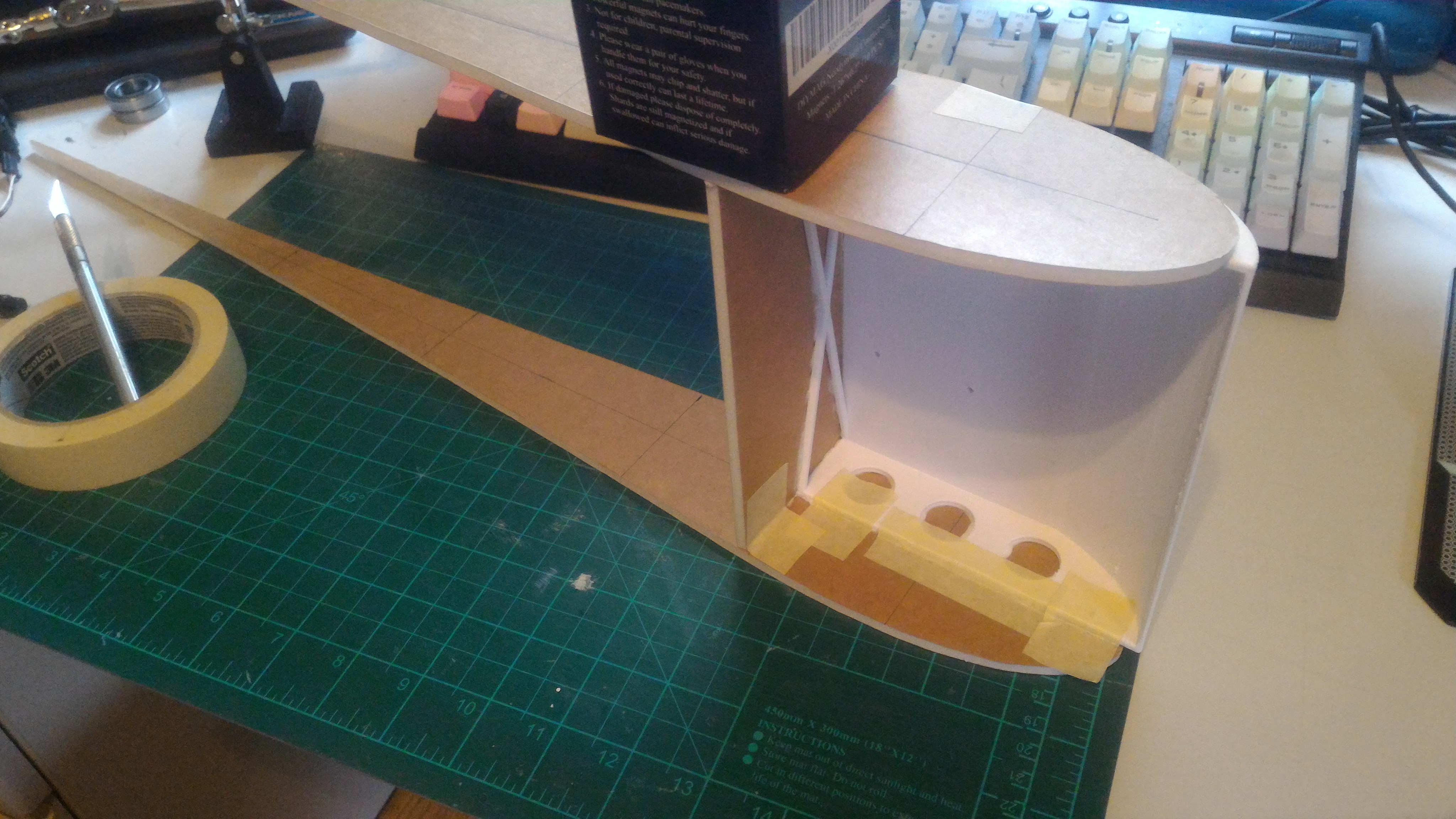 While the glue dried on the foam pieces I designed some light and simple servo trays to mount the positively ancient Futaba S28 and S3004 servos. 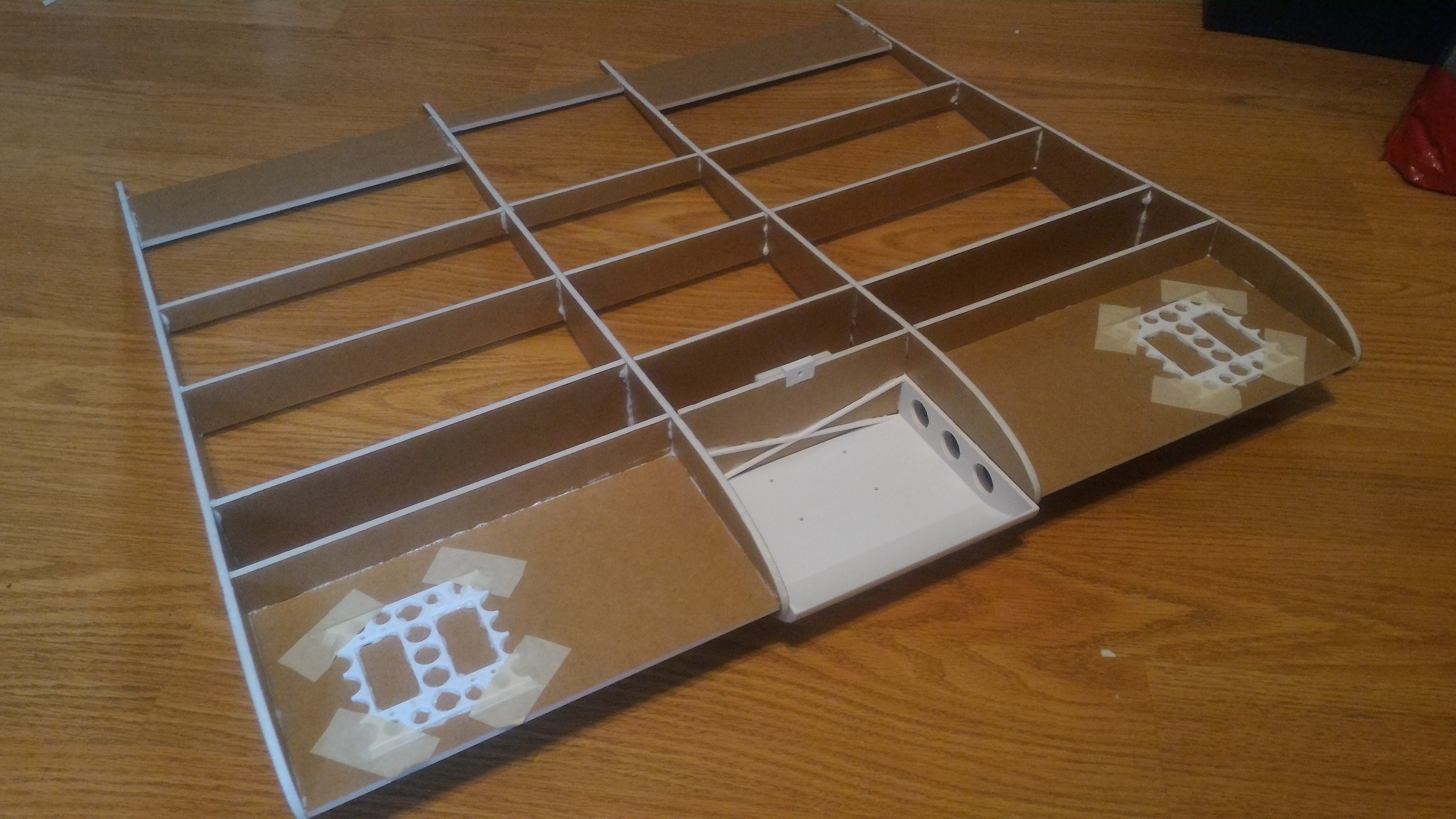 I then installed said servos and used T-pins to help skin the bottom of the wing. 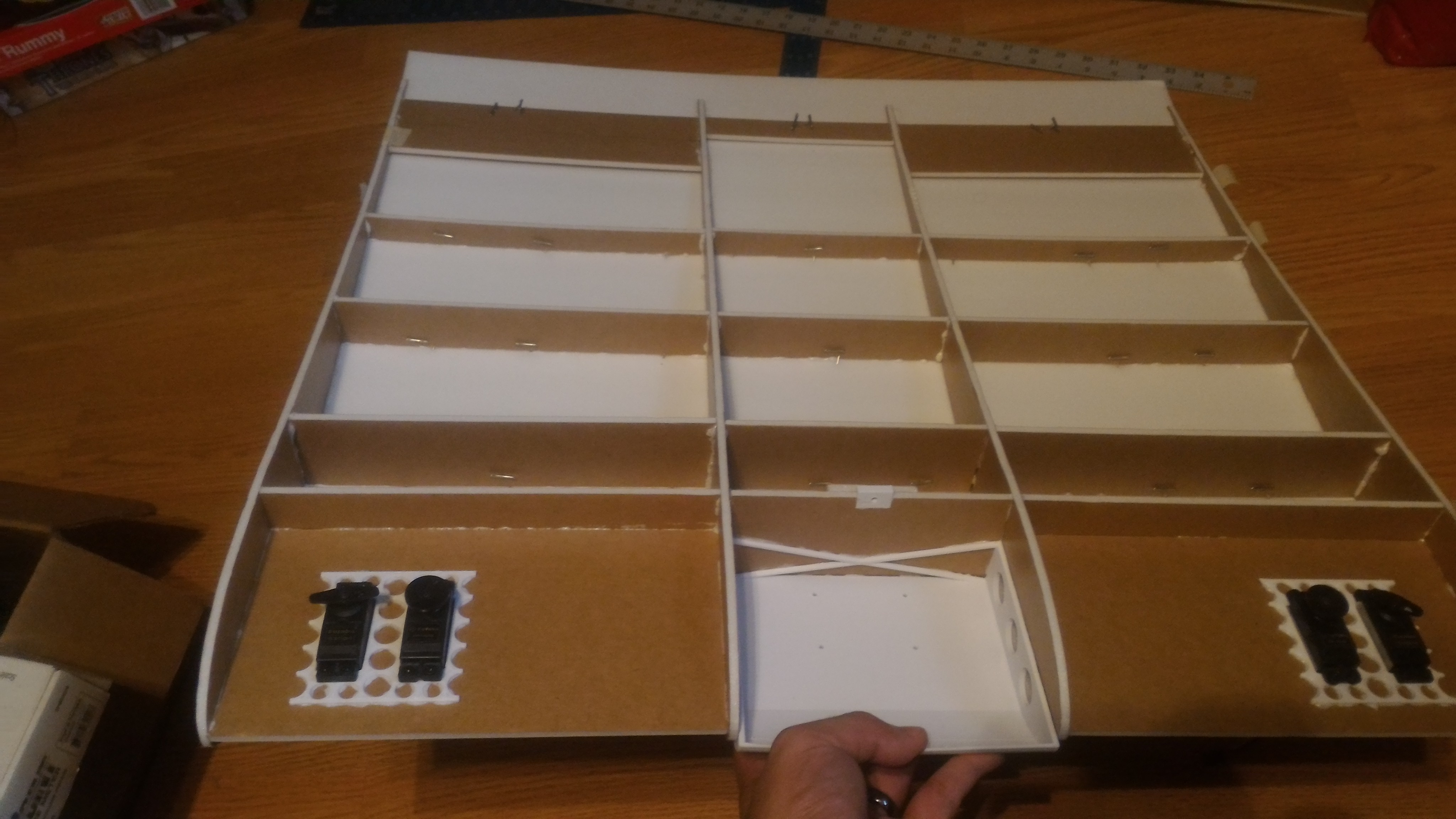 Not a huge fan of that curve at this point, but I'll press it out to when covering the top side.


Next up is the power and electronics.

#3
I started with cutting out squares from the heat sink over the heat spreader on the ESCs. 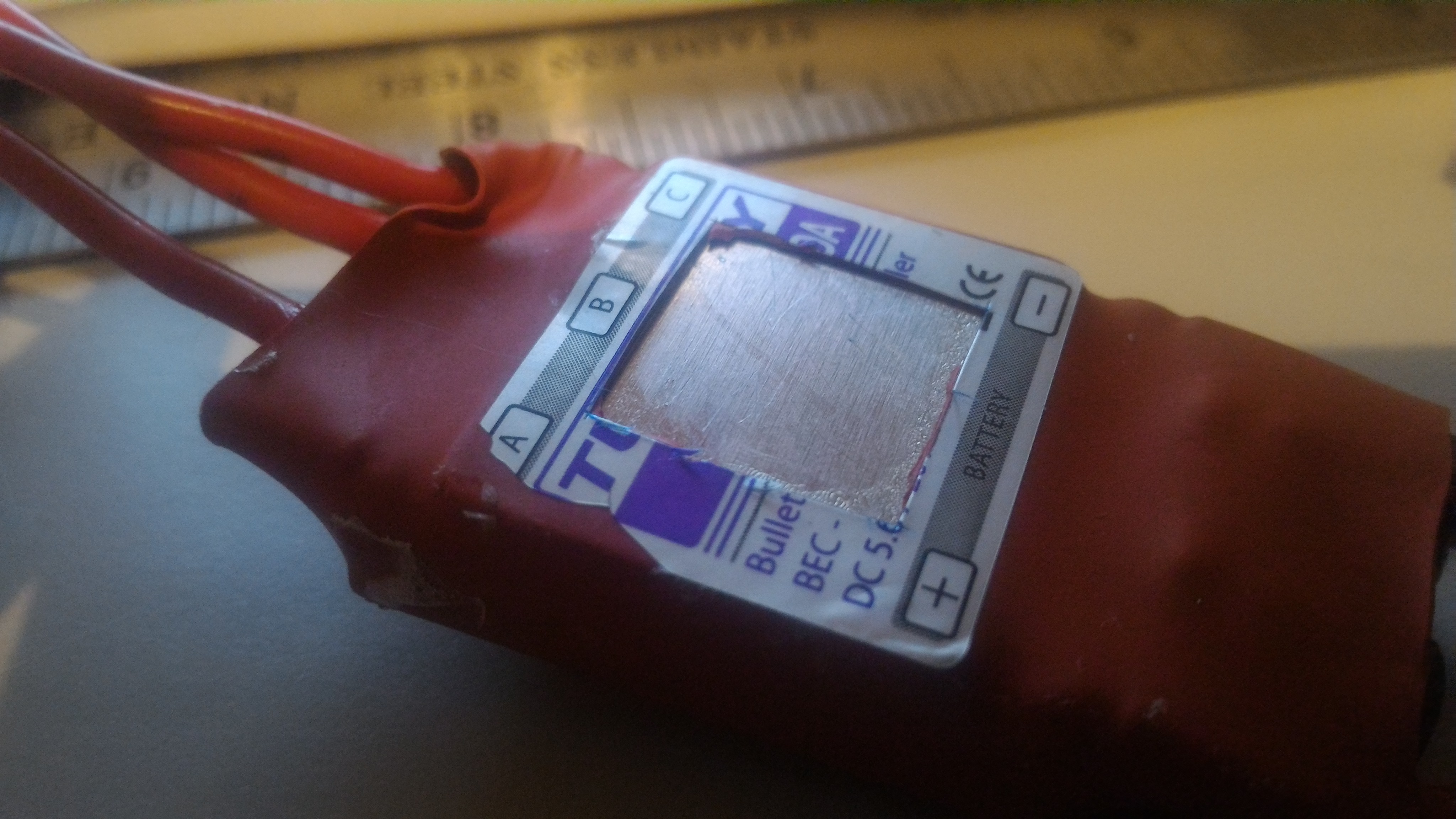 then stuck small heatsinks onto them. These will protrude from the nacelles to cool the ESCs, which will be sealed inside. 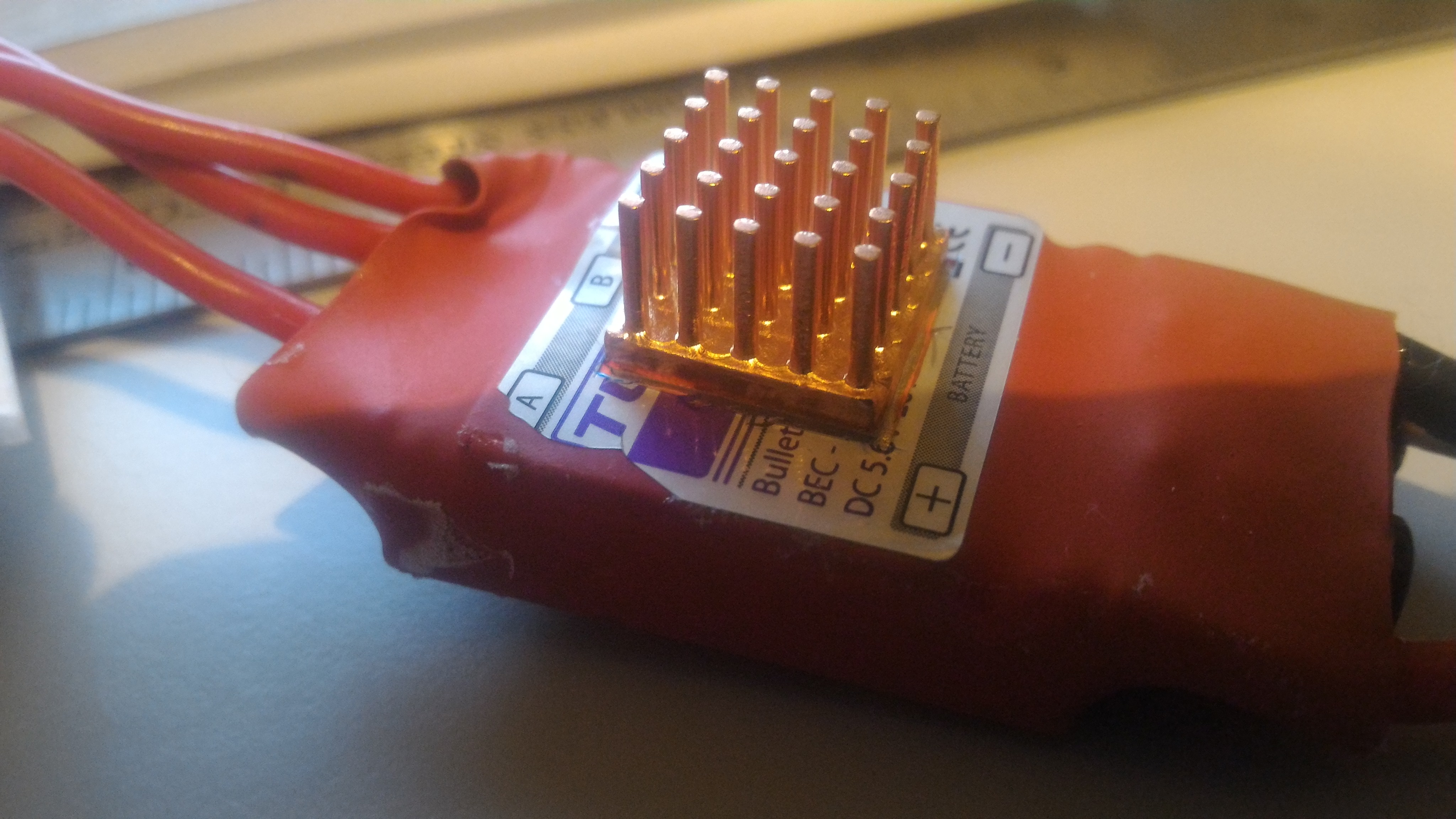 I could have done the cutout in CAD, but I figured cutting it out afterwards was going to be faster than properly dimensioning it in the design phase. 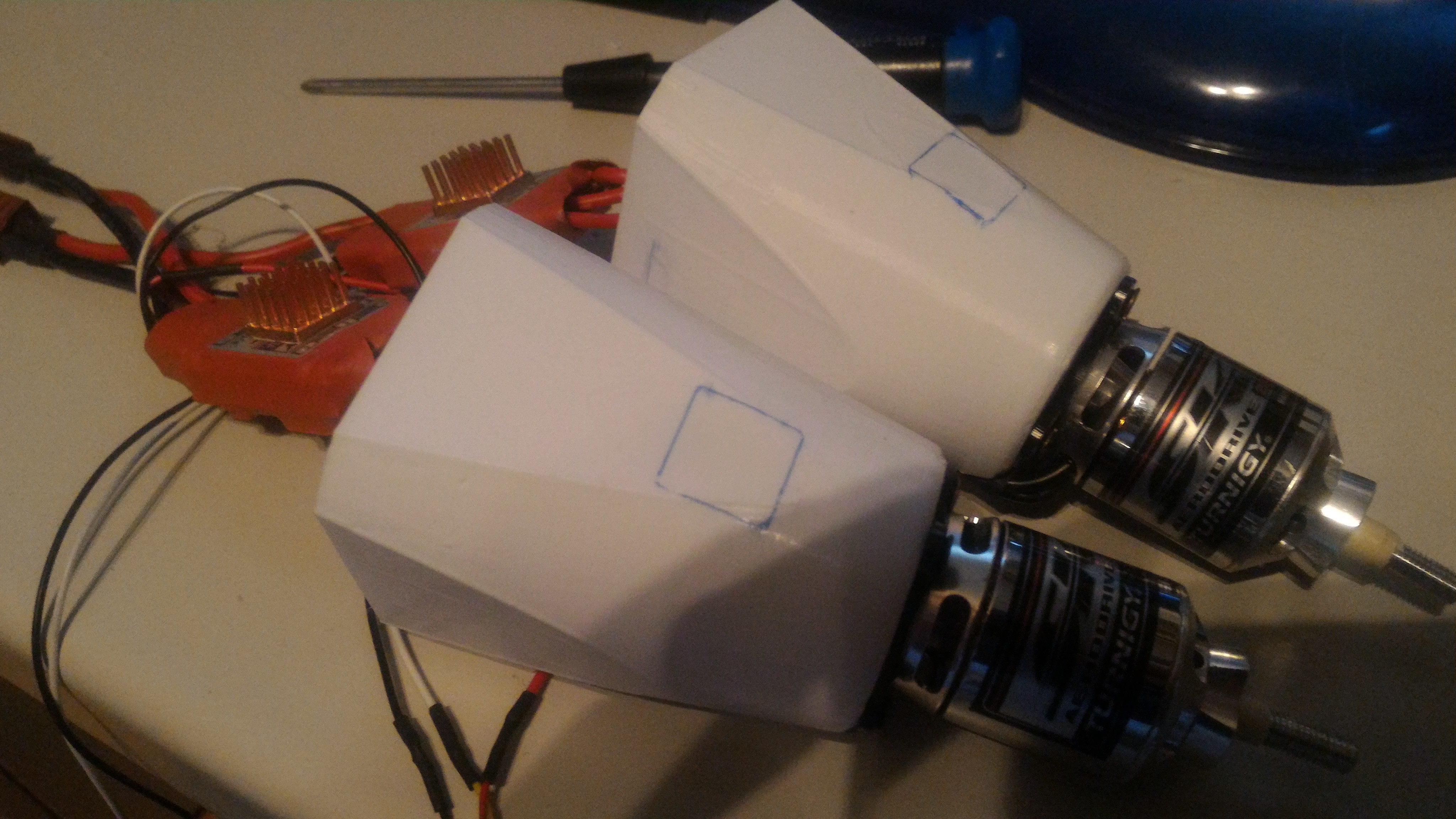 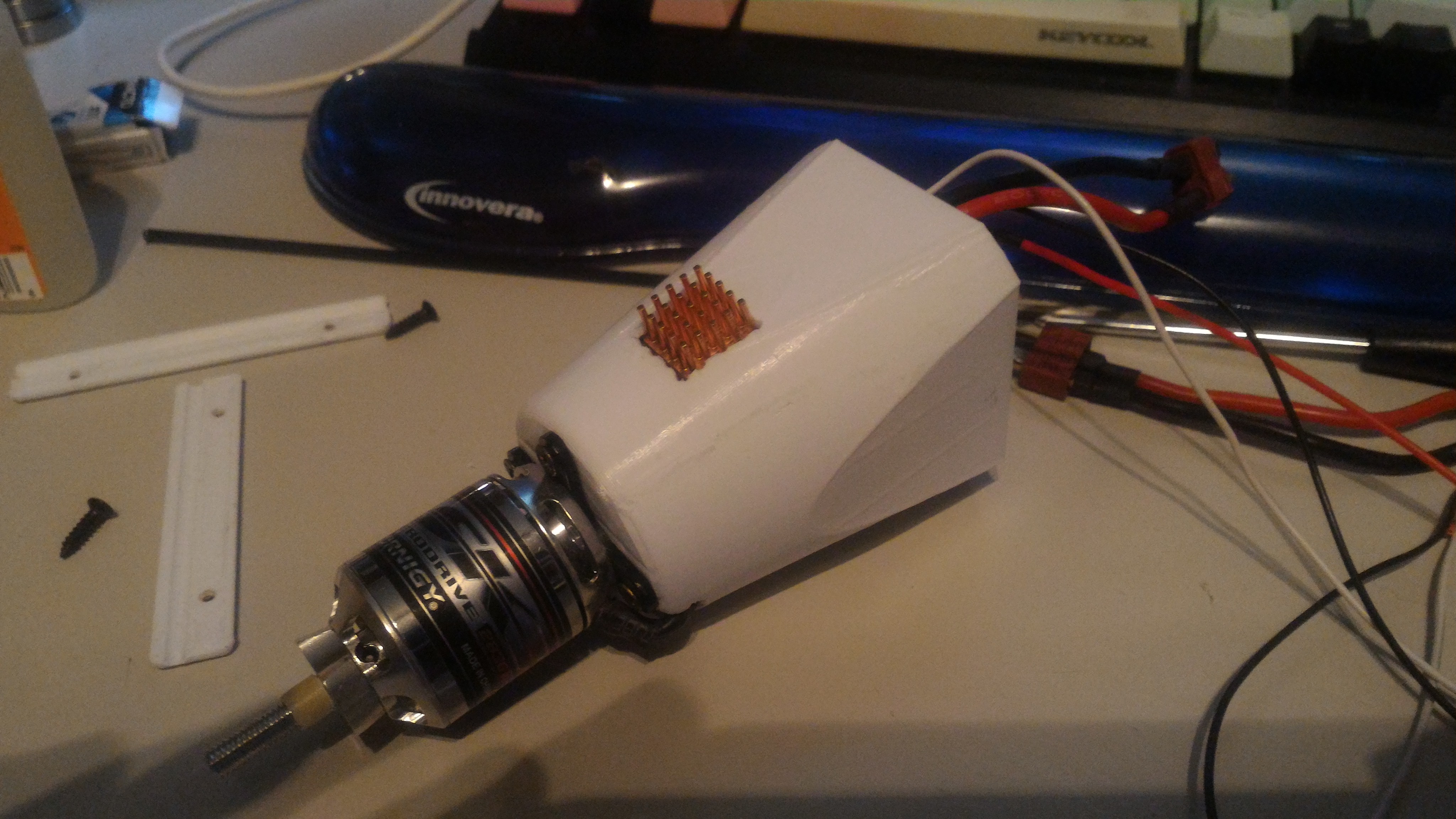 It came out OK. I sealed it with gorilla glue around the edge of the heatsink. Should cool the ESCs nicely without adding much drag to the front of the aircraft. 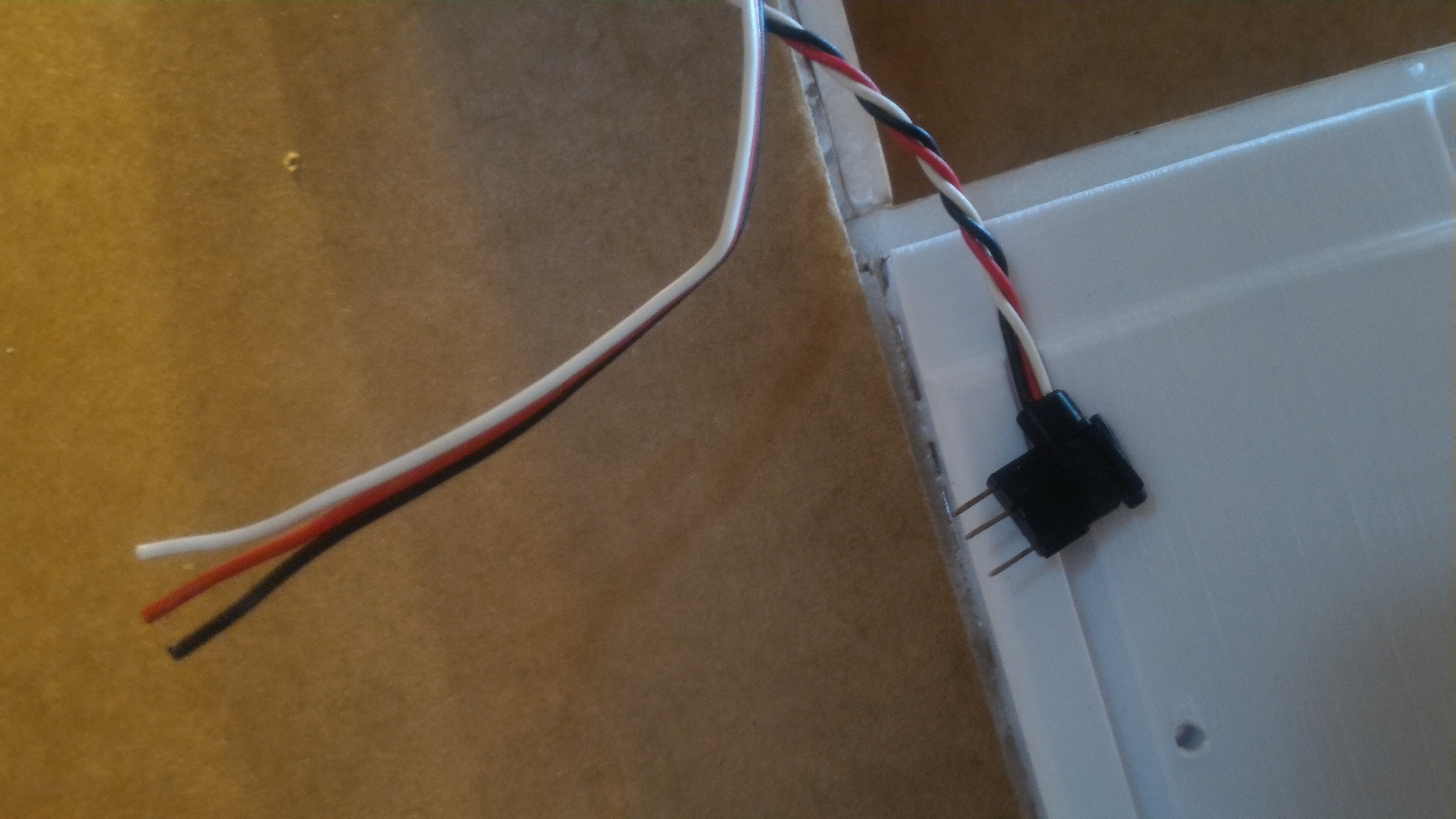 I had to solder on new connectors since these Futaba ones haven't been used since the Dark Ages. 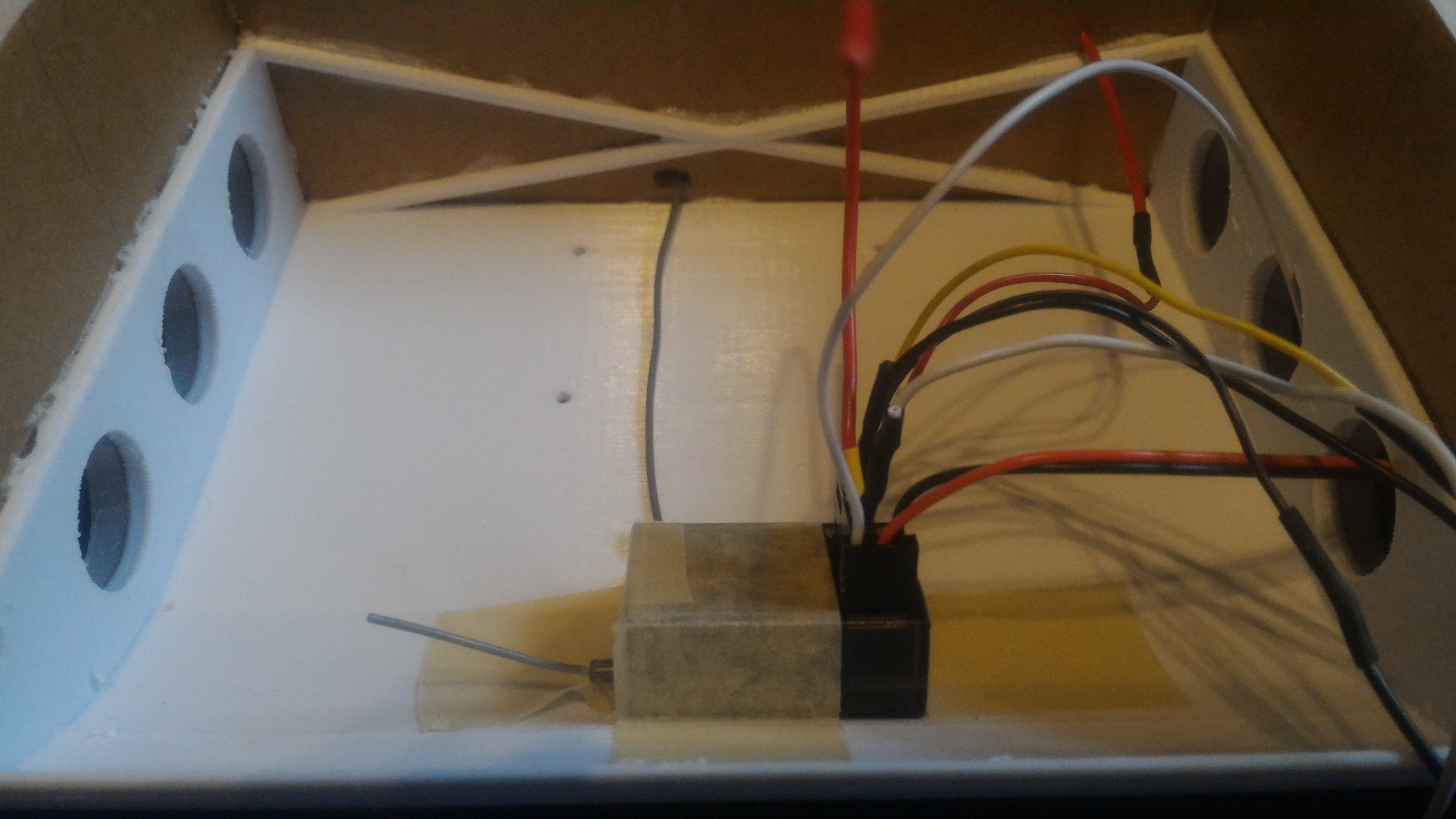 I grabbed some heavily used servo connectors and plugged them into the receiver, one normally on the bind/batt plug for power, and two others plugged in horizontally across the data ports of all 6 channels. This way I only have to use 3 connectors instead of 6.


Ol' Mr. Helpy here made soldering all of the power and data wires a breeze. Each ESC's BEC will power two of the four servos, with the left-side BEC also providing power to the receiver. 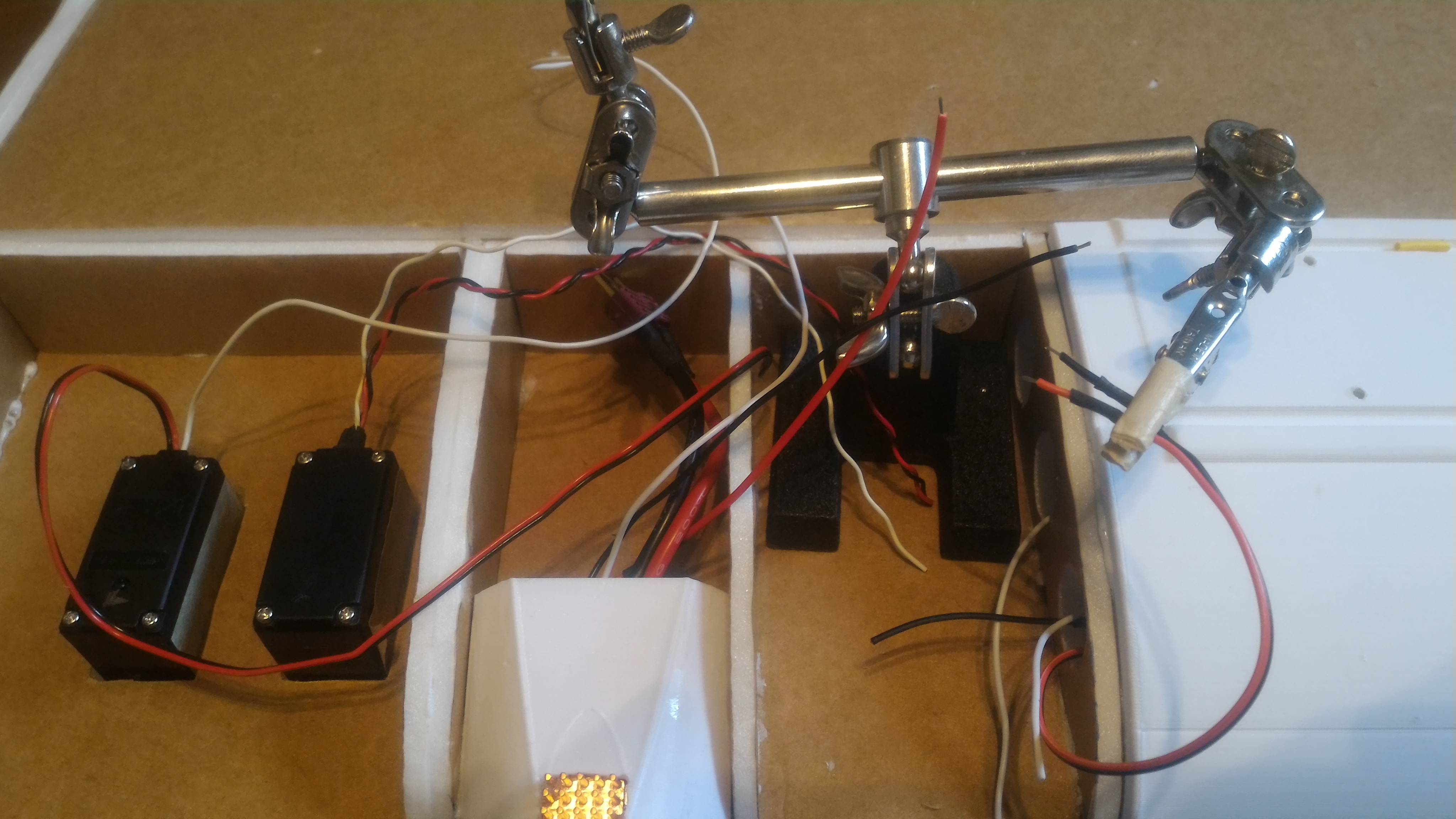 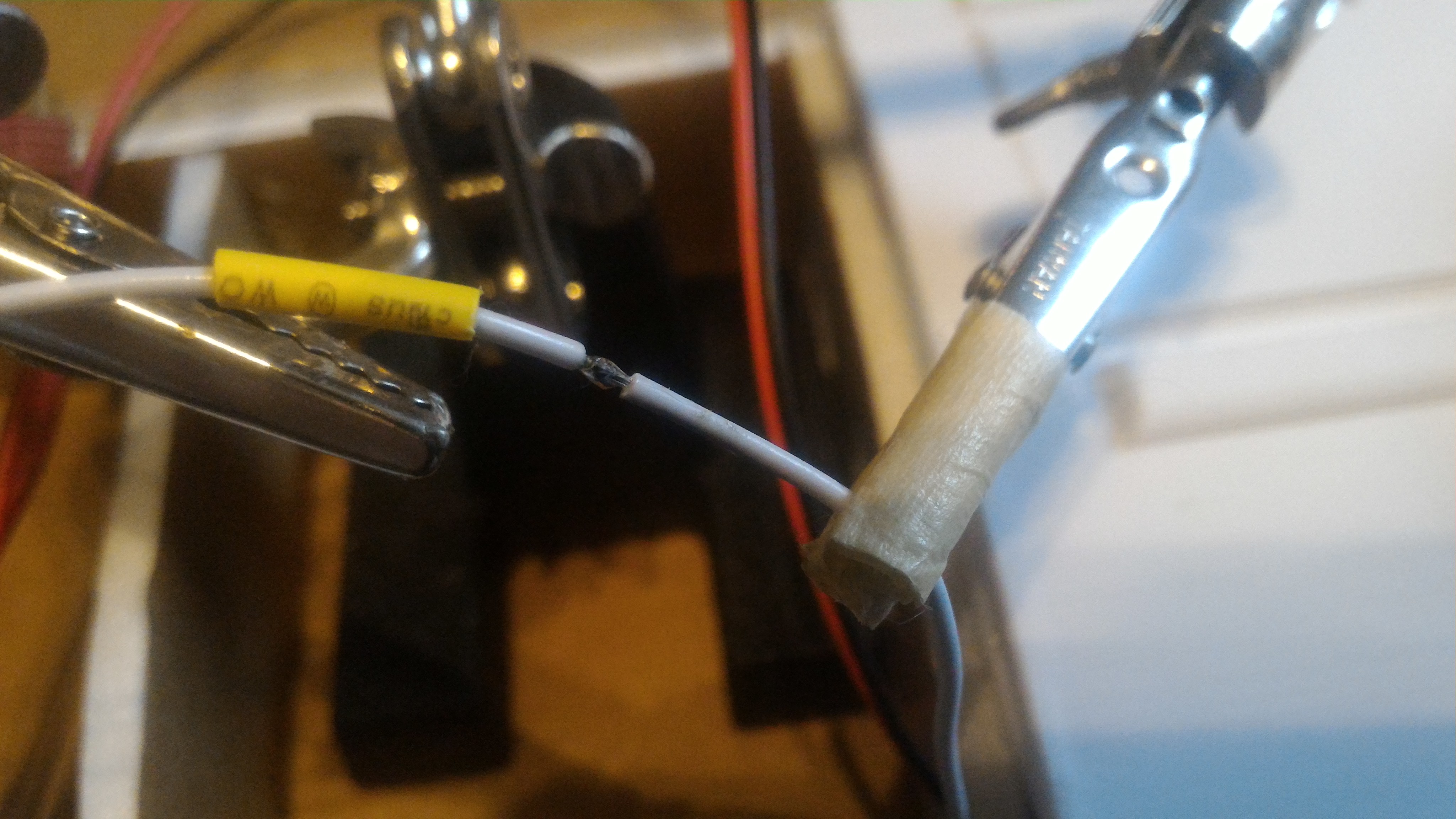 Ideally I would have measured and trimmed all of the wires to size, but I'm not too disappointed considering how quickly this went. 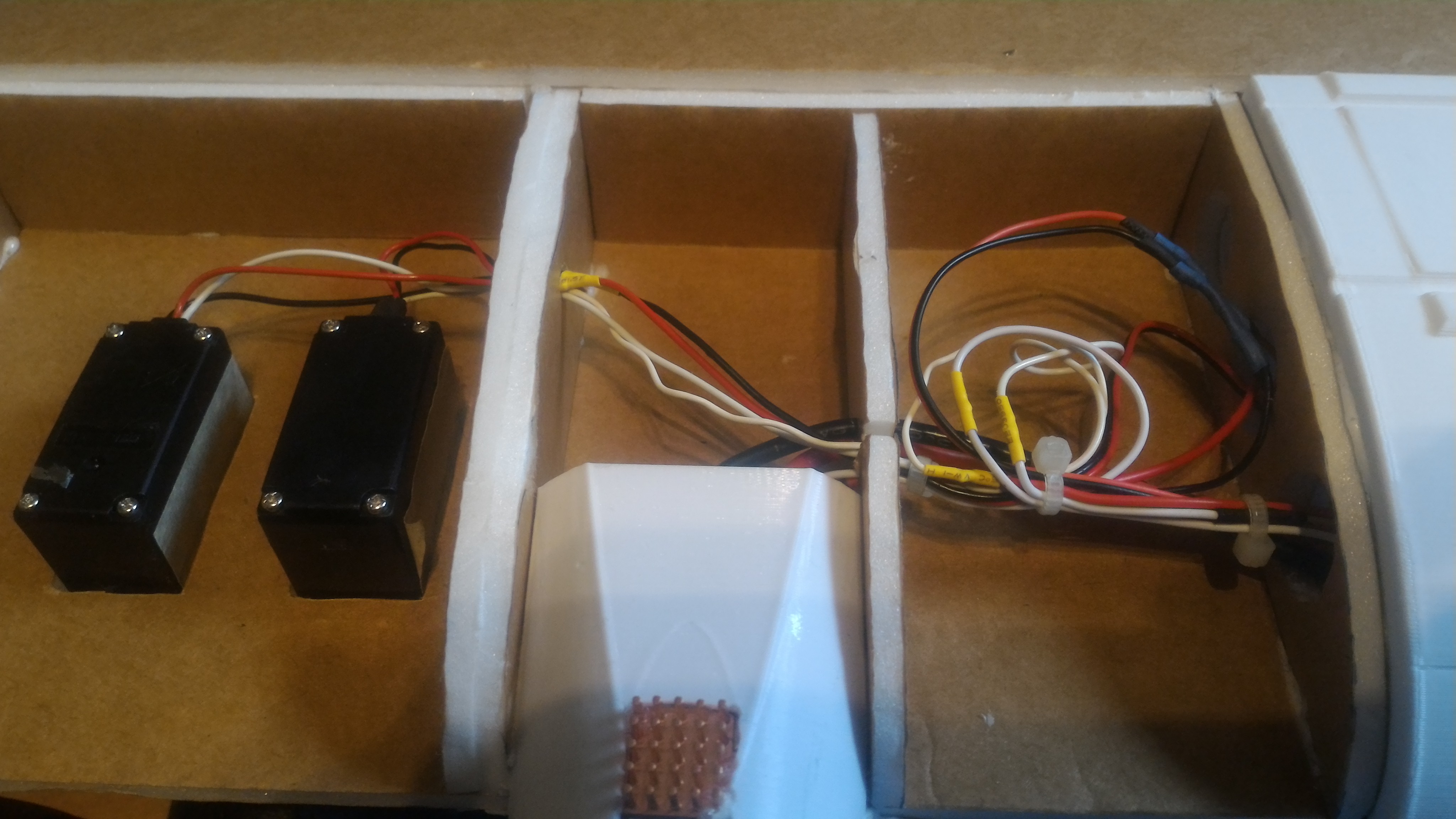 Soldering some of the shorter wires required amputating Mr. Helpy's right hand. The doctors say he will make a full recovery. 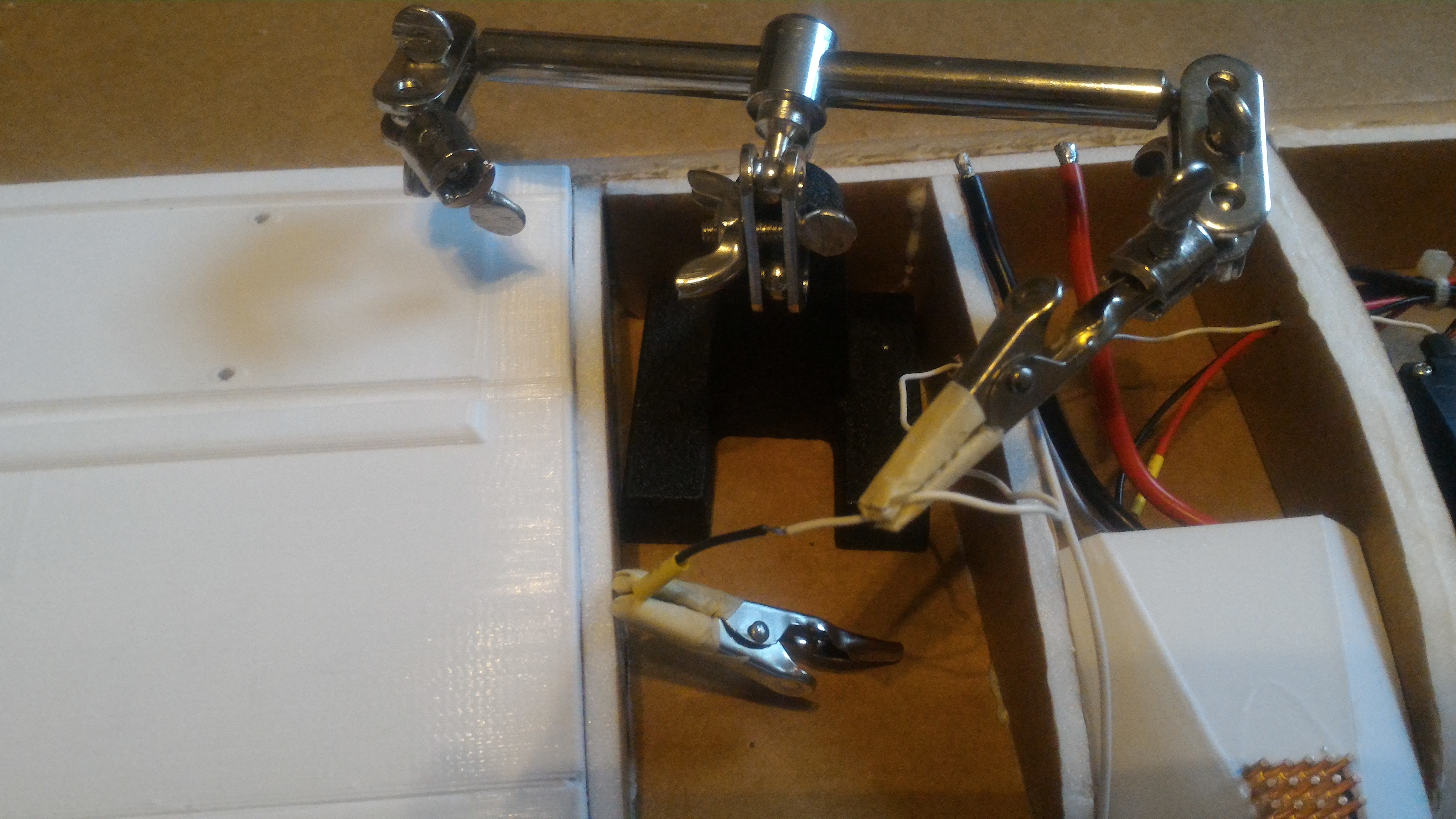 The right side came out marginally neater than the left. 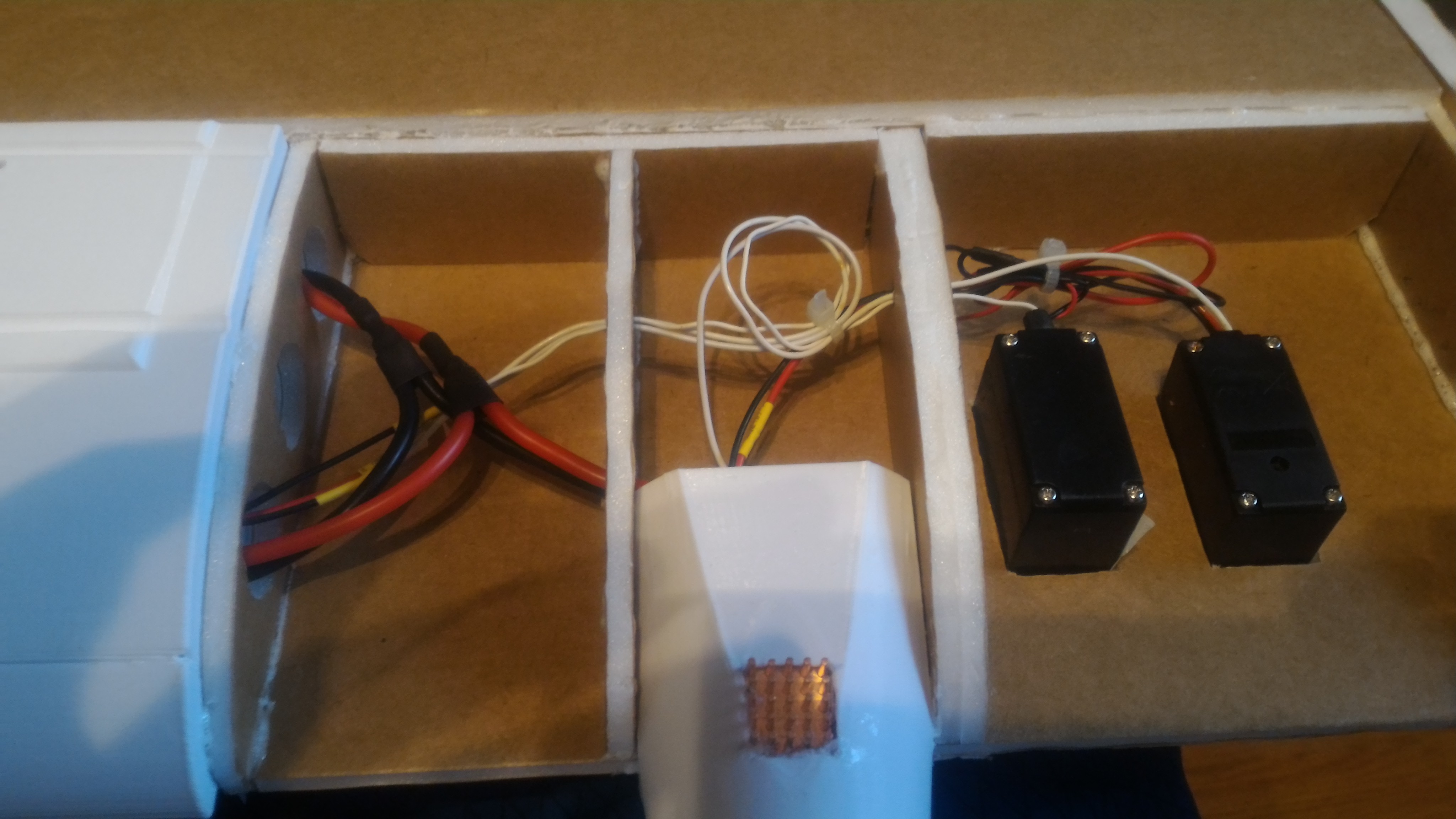 This plane will run on two 4S batteries in parallel. One would be adequate to run the motors for a decent flight time, but I suspect it will need the weight for balance. 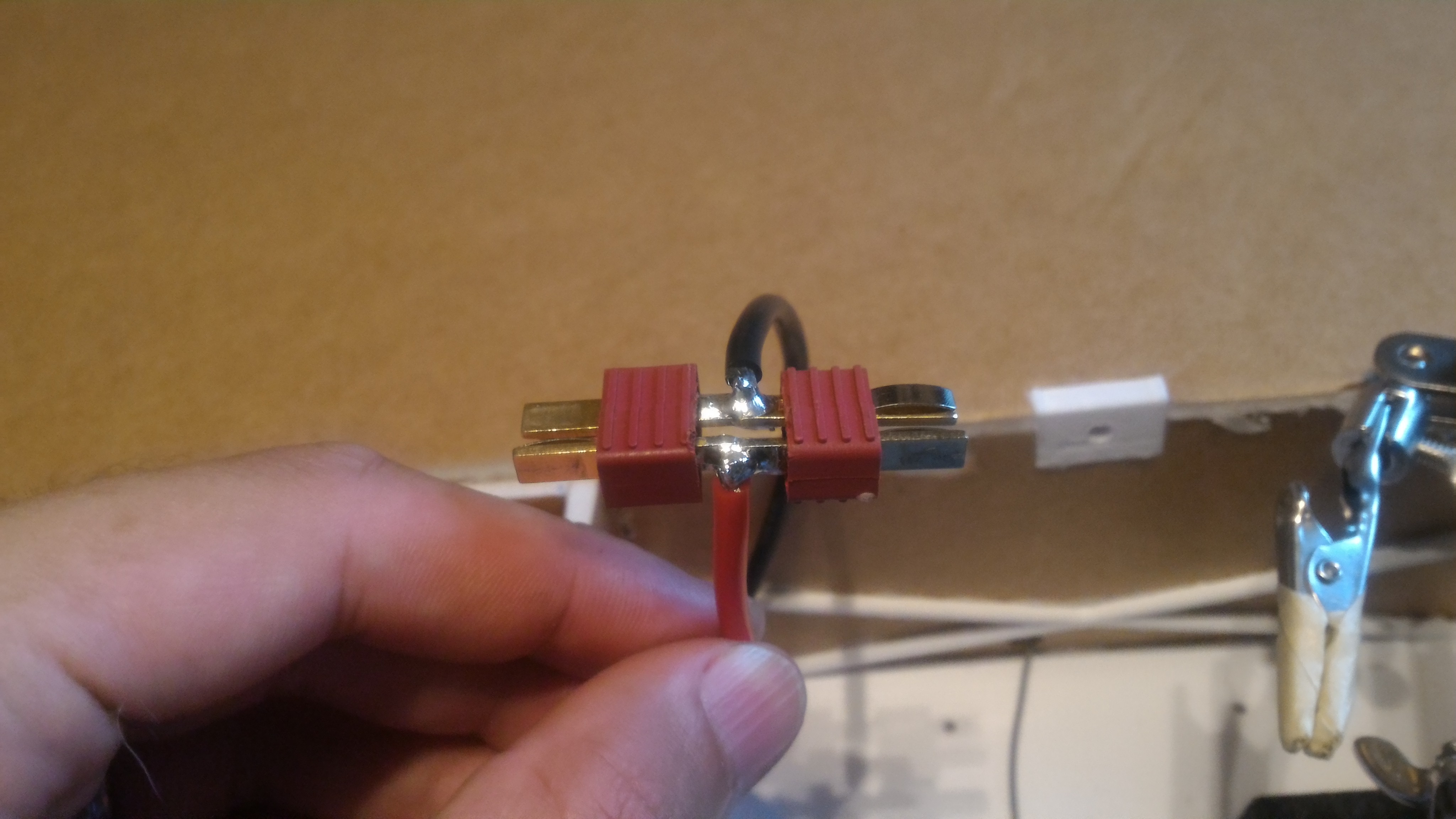 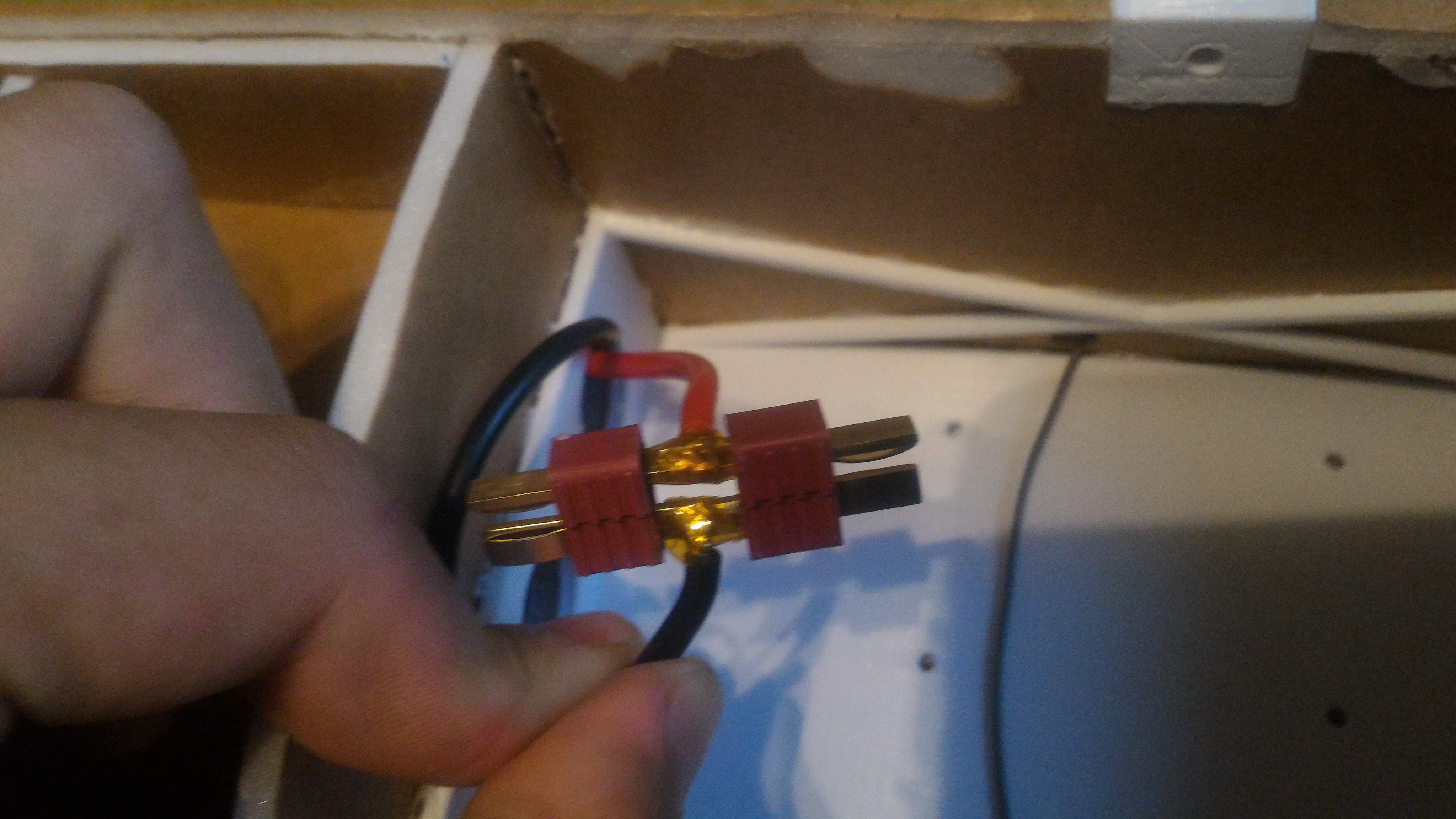 While this was going on I printed some custom control hardware and wheel fairings. 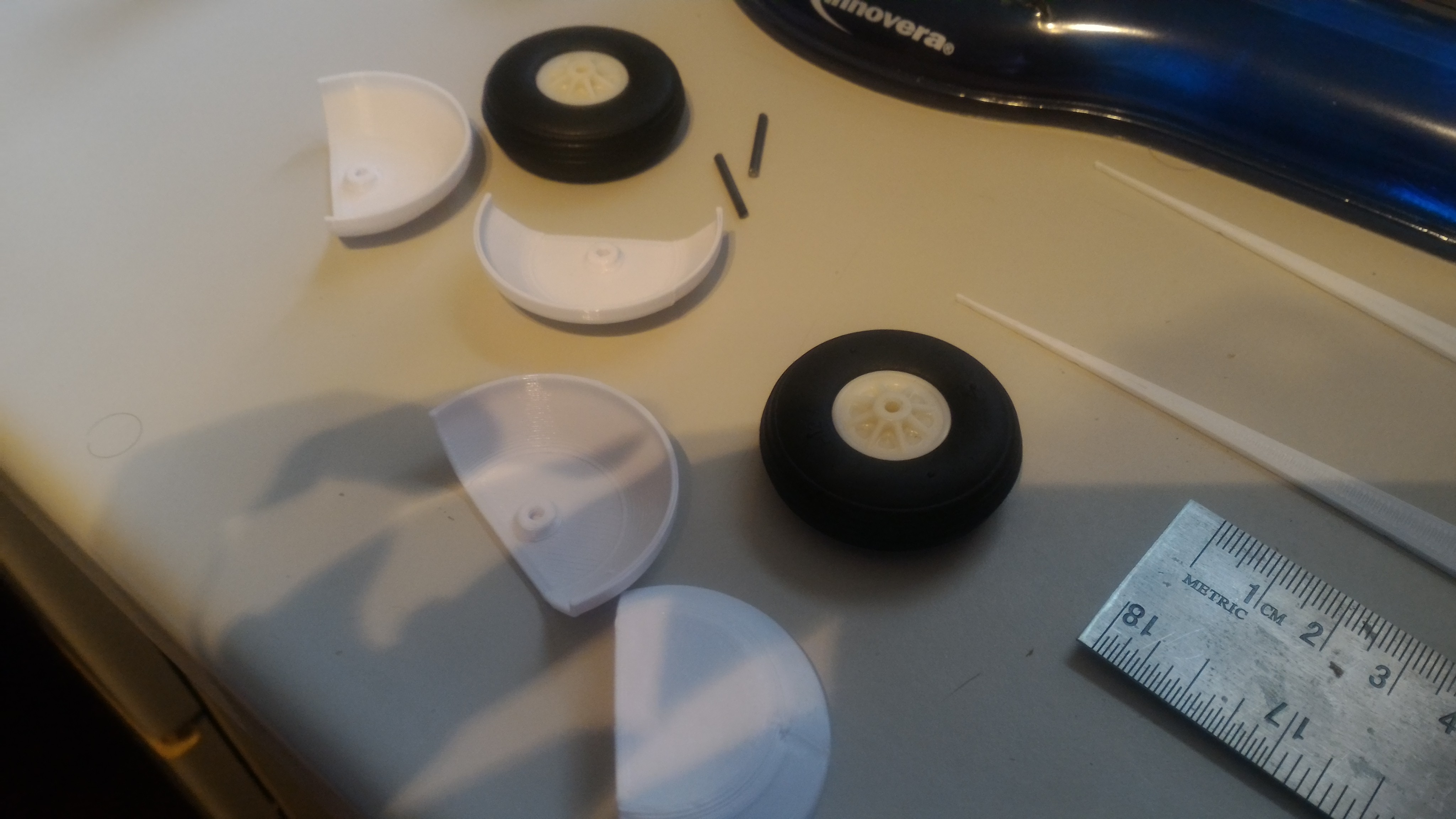 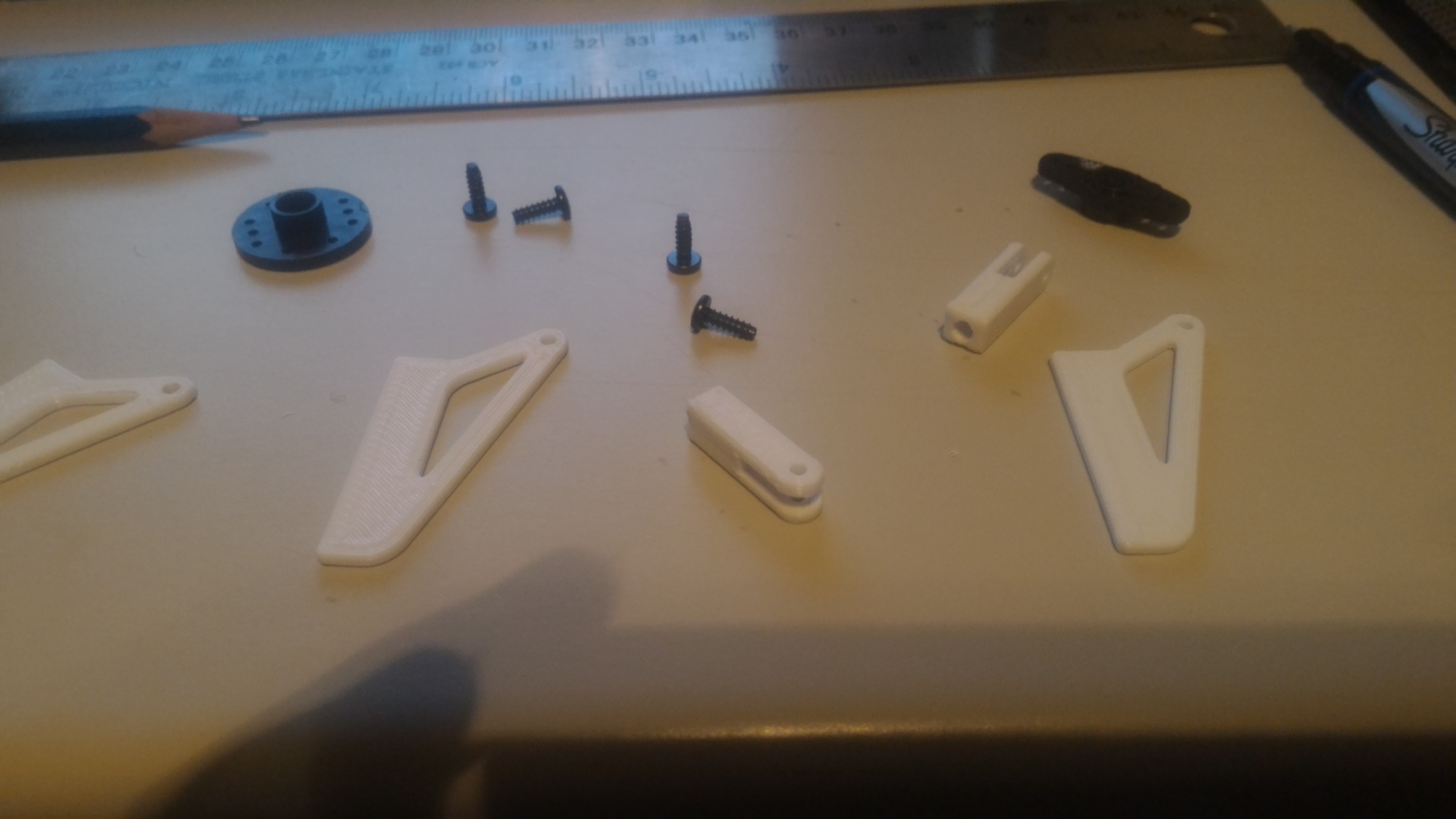 I have a lot of hardware laying around, but nothing that worked great for connecting 3mm carbon tube, which I really wanted to use here. Usually I'll use Dubro ball links threaded onto a steel rod that I'll epoxy into the ends of the tube, but those connectors are expensive and I wanted a cheaper, more simple solution. I gorilla glued the rods into some 3D printed clevises, wrapping tape around them to prevent the expanding glue from separating the plastic pieces. 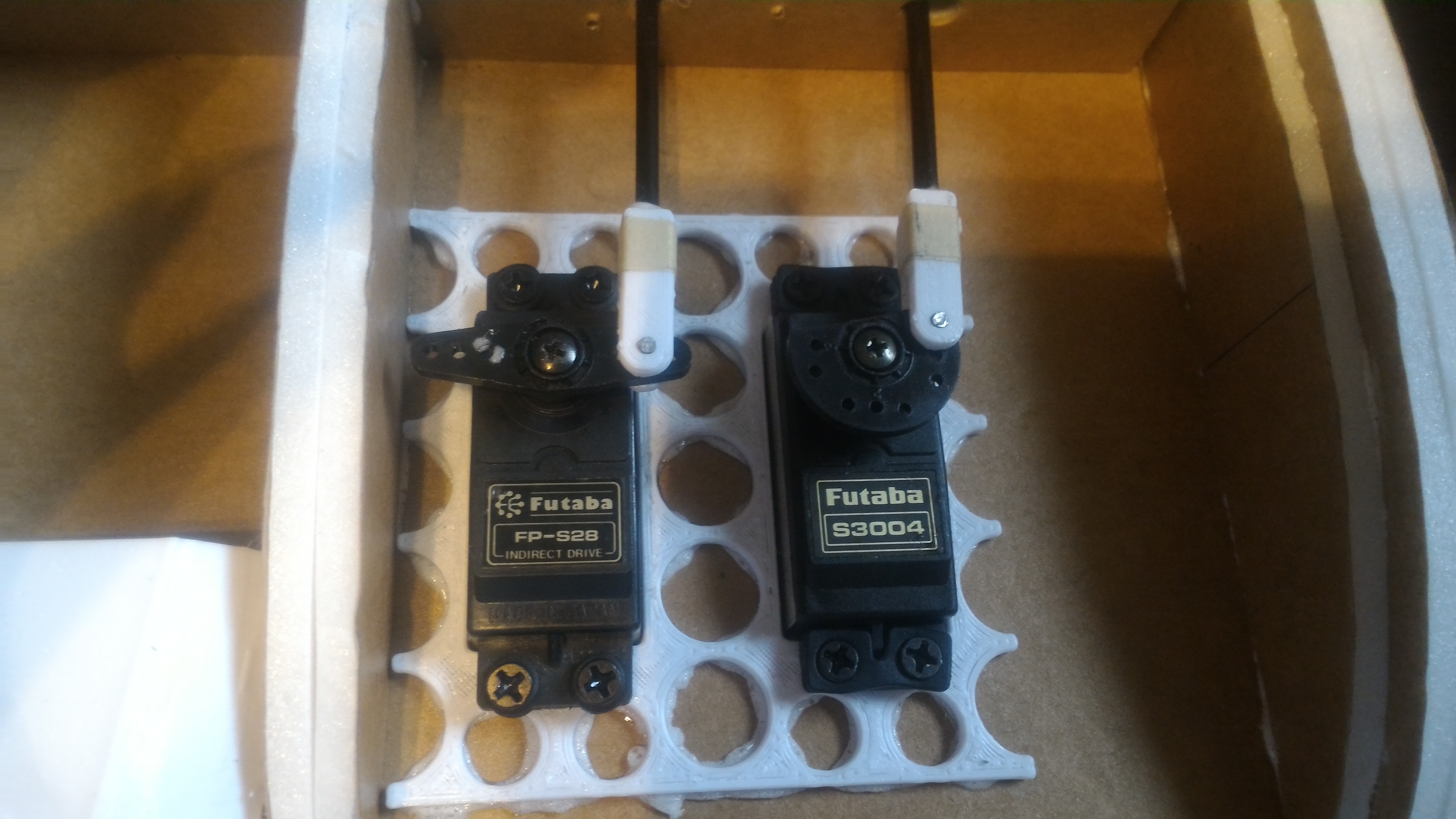 Mentor
#4
Love the build technique you're using here! 3d printing templates for the curvy bits is a great idea!

#5
Thanks, Rockyboy! I wish it was something I had thought of earlier, it really cut down on the amount of prep work I had to do for this project. I'll definitely be using 3D printed templates for future projects.

The maiden is done. It flies very nicely, though it's a touch nose-heavy. This is generally good news, since I can probably balance it with paint. Performance was excellent. Unlimited vertical, top speed looked somewhere in the 60-70mph range, and stall seemed nonexistent. I set my transmitter alarm for 10 minutes, but based on the remaining battery capacity I'd guess mixed flight time is probably around 15 minutes on two 4S 2,200 packs in parallel. I could get away with just one battery, but it's already so lightly loaded (WCL is currently 6.3) that I feel like it needs the weight.

Here it is pre-maiden. It looked like a pizza box in the air. 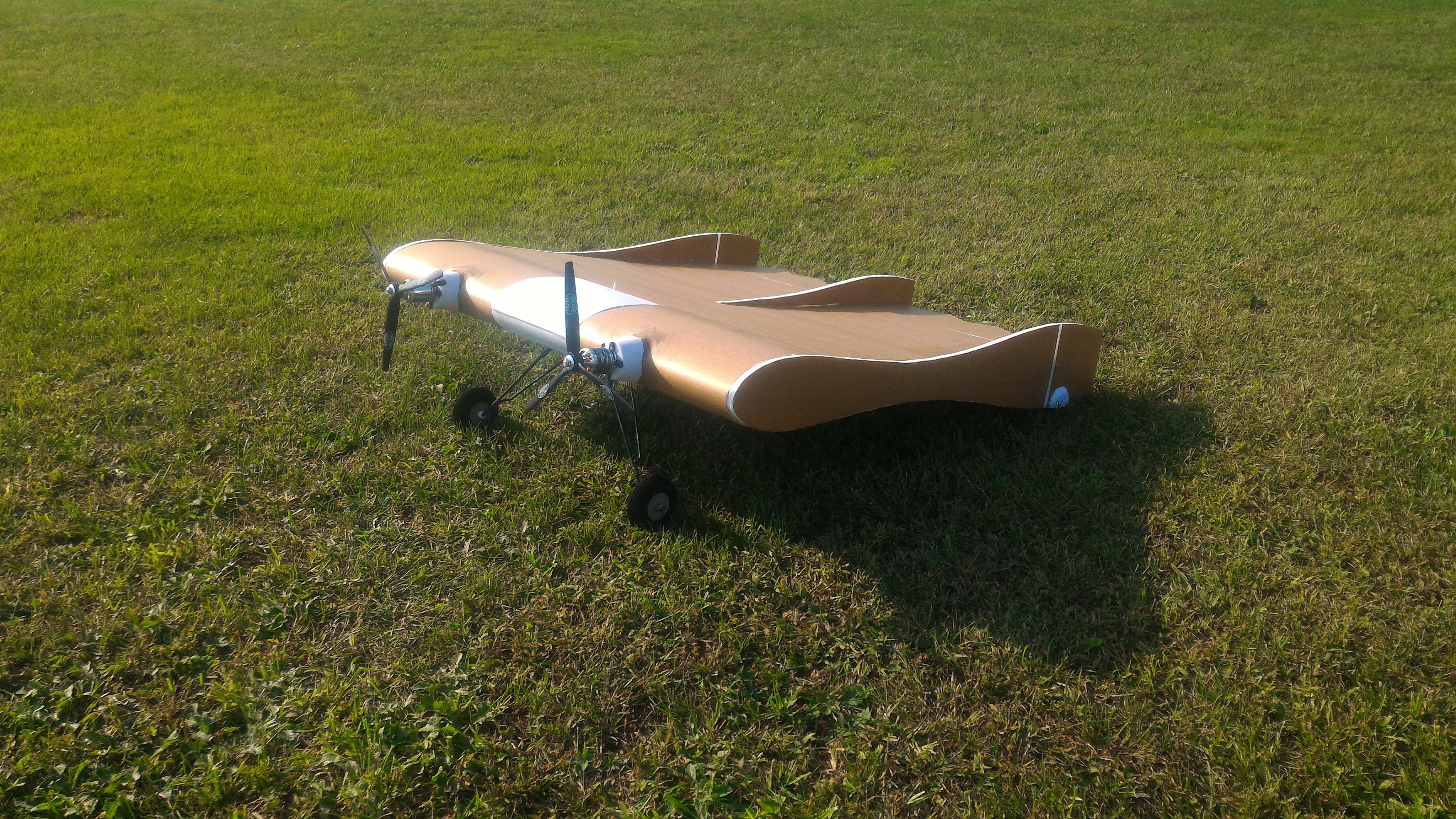 Gerry's landing gear worked great, and though they're a bit slow the servos performed A-OK. Really the biggest issue I had was orientation. With differential thrust turned on it spins like a frisbee, and coming out of a spin it really is like trying to find orientation on a pizza box from a hundred feet away. I decided on a relatively simple paint scheme that could draw my attention to the front-right corner very quickly from a distance. 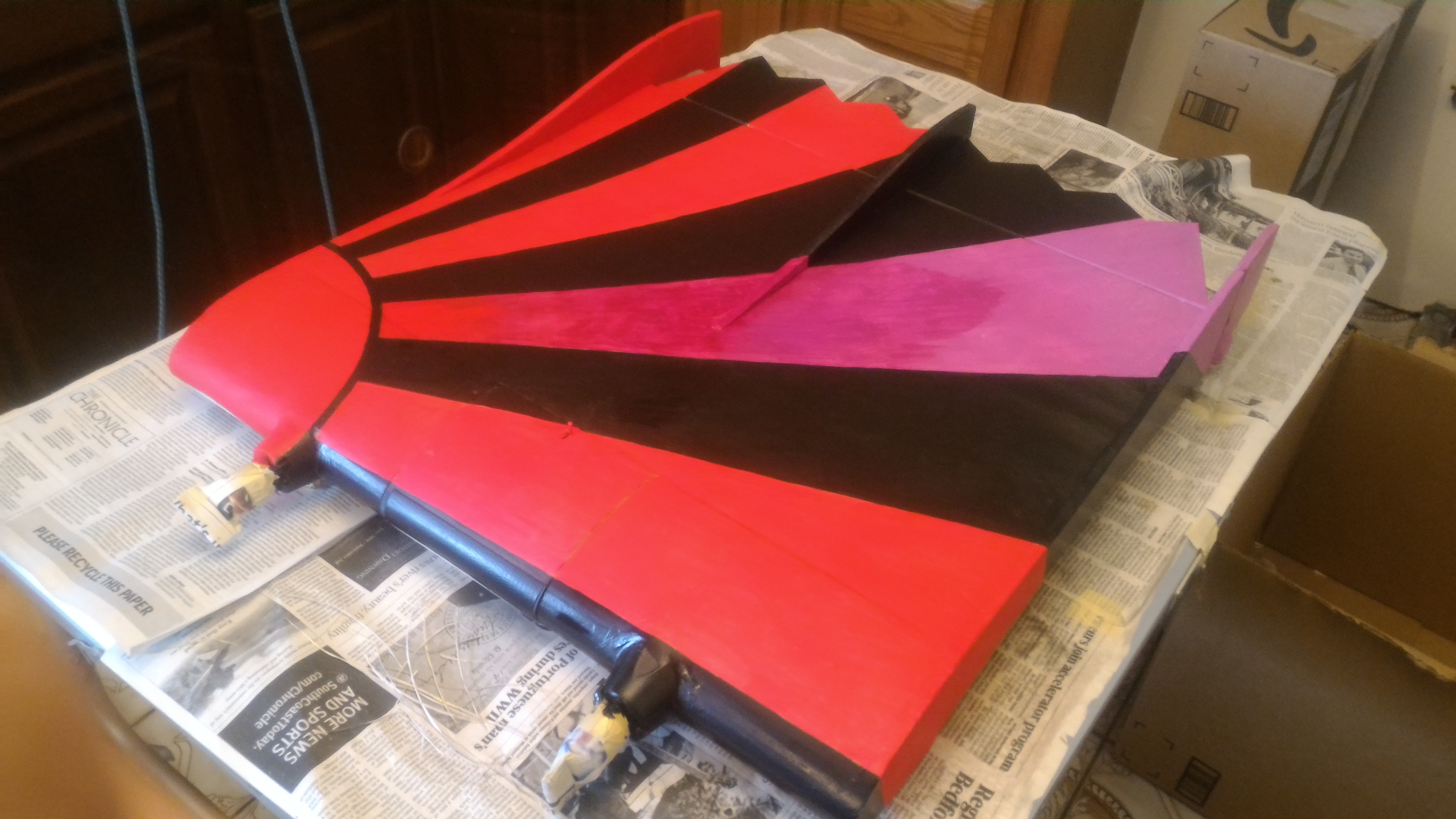 It's coming out OK. I'm not super happy with the gradient, but for a few hours' work it'll do. I'll use lighter colors to differentiate the underside, though I haven't yet decided on a scheme or design.

Next step is to do floats. I'm debating between simple pontoons or something more complicated with hydrofoils. I'll probably end up with something in-between. Hopefully the next update will have video of the thing in flight.

Mentor
#6
Awesome! Definitely need to load the files & plans for this up into the resource area when you're all set with them - this is a great design that deserves to be shared

#7
Of course! I've attached to this post all of the original .stl files I used to build this wing with the exception of the servo trays. I kind of doubt anyone else will be making this with 30-year-old Futabas. Also the landing gear mounts will probably need to be modified since I designed them to work with this one set of handmade gear I had laying around. Over the winter I'd like to do a more refined "Version 2" of this plane using modern electronics and 3D printed retracts, and that will have a more guided build process.