#1
I was gifted this by a family member who is big into the hobby. I have only flown foamies. He is really excited for me to do a balsa plane. 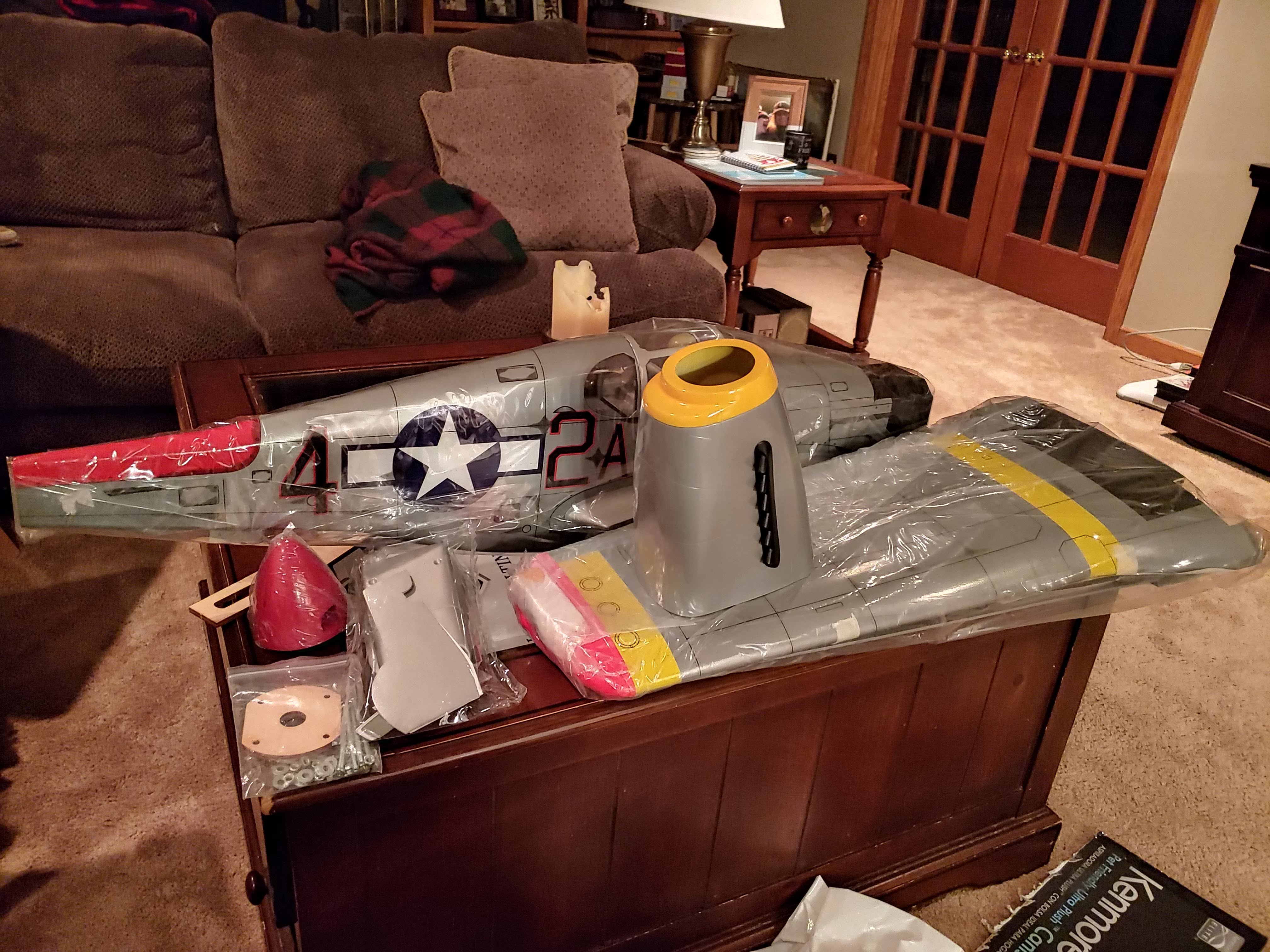 Cutting away for the retracts: 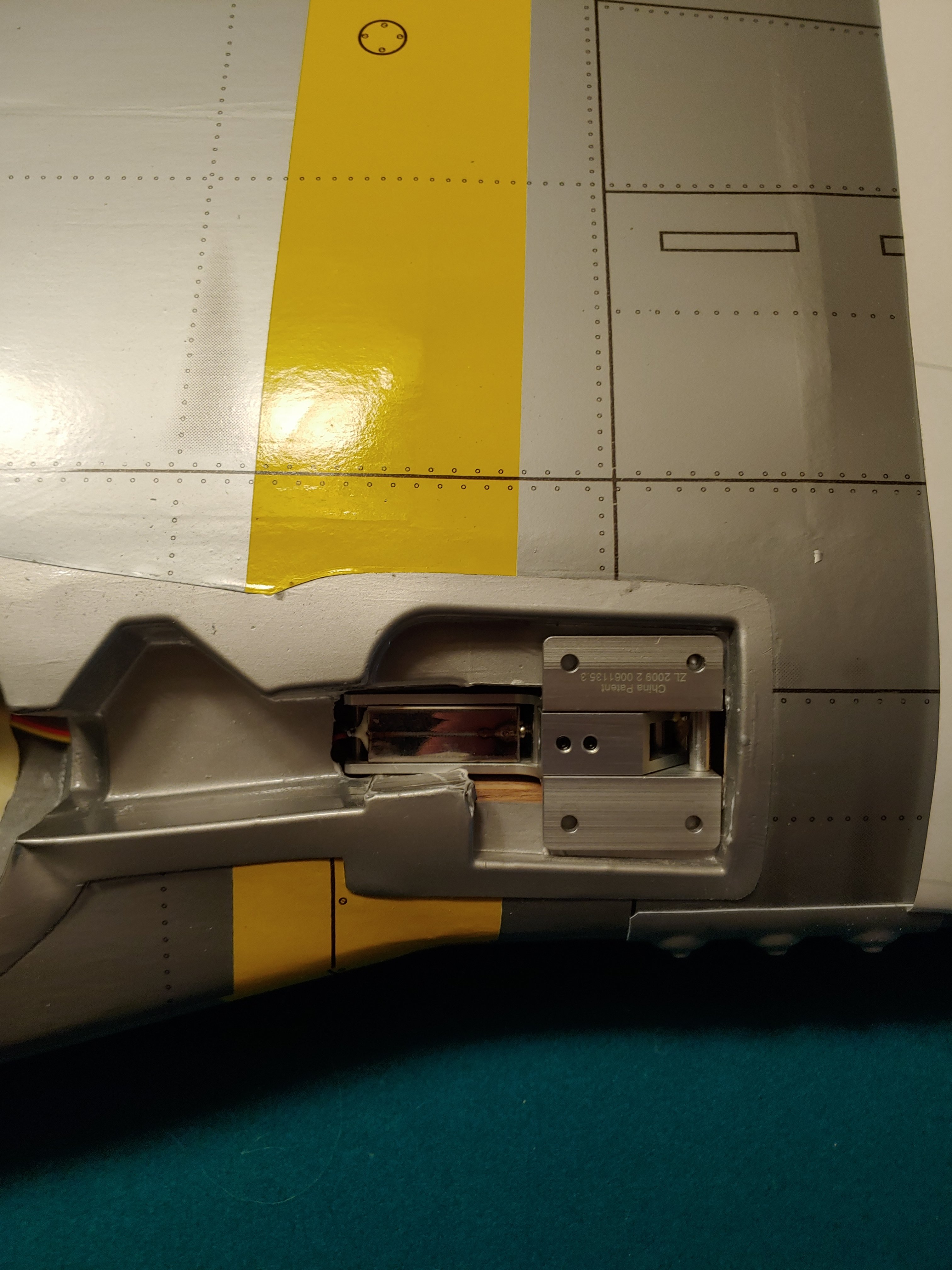 #3
Cut out the area for aileron servos. The instructions for the plane do not include this wing design so I had to ask where it was.

I also learned that rope and balsa piece are for guiding your wire through the wing.

Now I have to figure out where on the wing root to cut open for the wire. 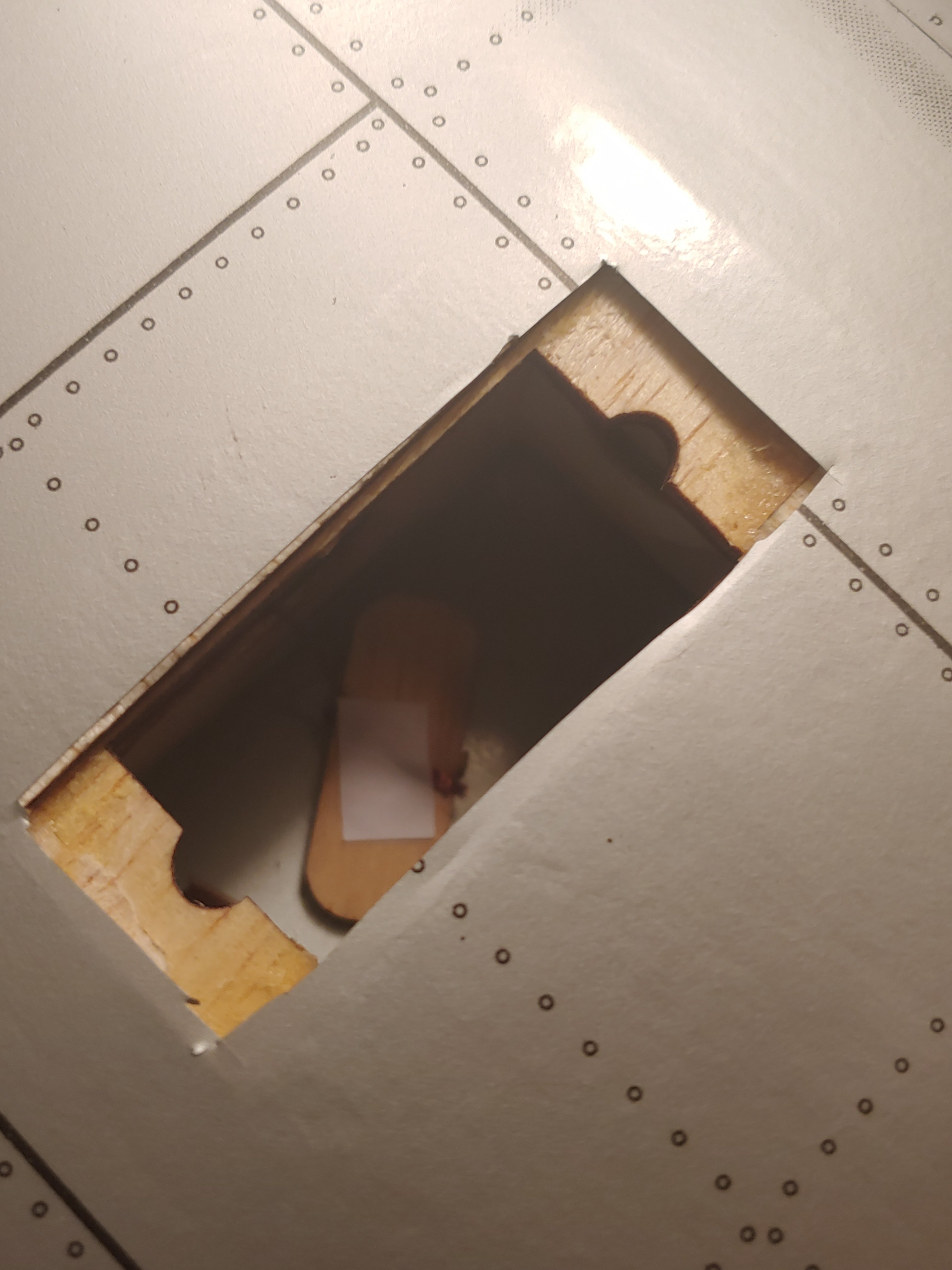 Mentor
#4
It's a nice touch that the string for pulling the aileron servo wires is included!

If you aren't able to find any other documentation for where on the wing root rib to cut through to get the wire, take a look at the inside of the fuselage and see if there is an opening in the balsa just behind the spar.

If so, that's probably the right location to go with.

If not, I'd suggest going in a straight line to the wing root from where the string goes into the balsa in your picture, perhaps learning a little bit towards the thickest part of the wing. Chances are it's designed with the fewest cuts to get that wire through the wing, and the holes are probably placed in the thickest part of the ribs, so it shouldn't wander around too much in there.
Last edited: May 8, 2019

#6
There is a small hole near the wing root... The manual did not show this exists. I goofed up the servo rope guides so if anyone has an idea on how to thread the extension wires without that I would appreciate it. 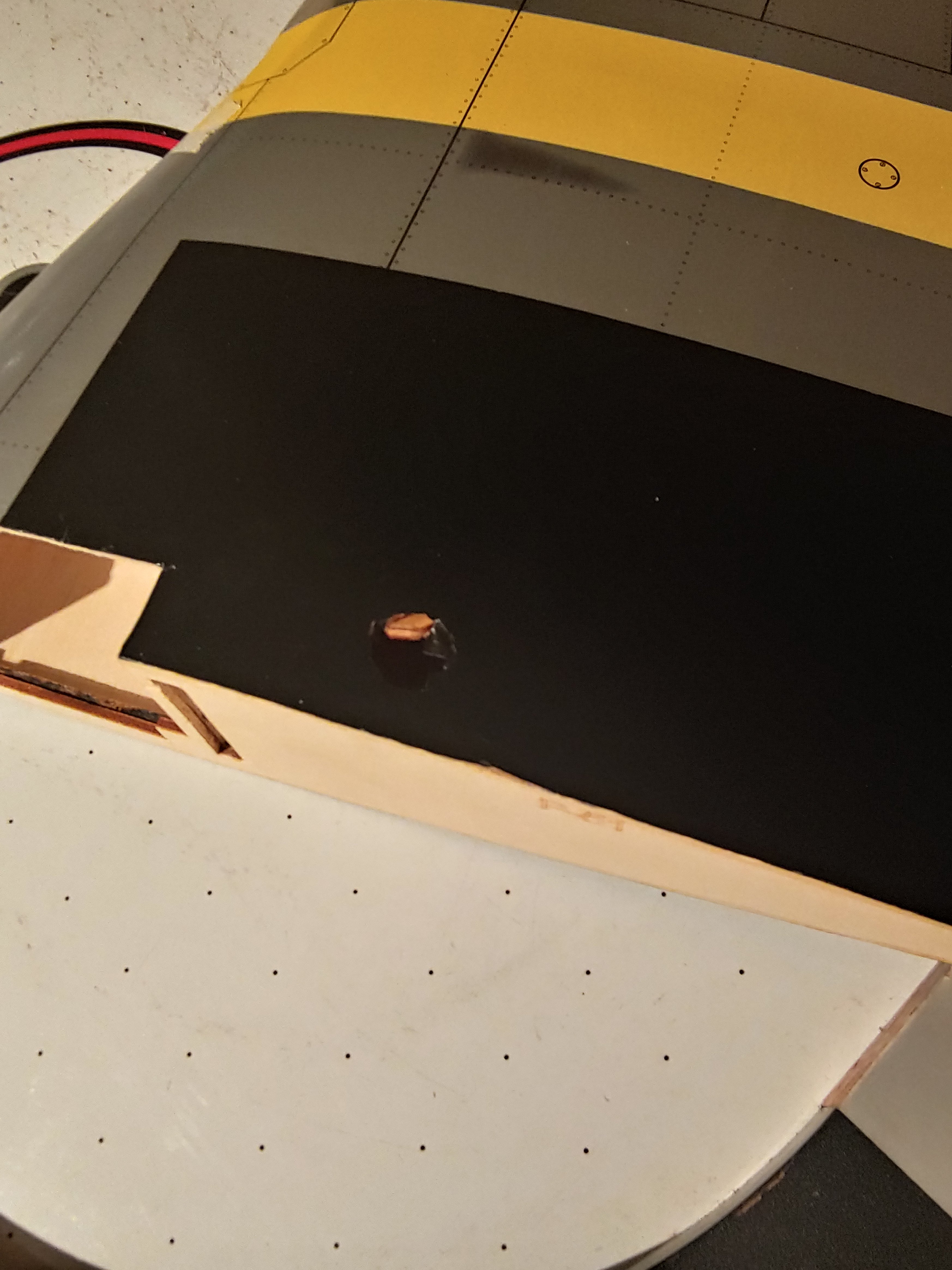 Extensions bought, and threaded through the wing. Using the supplied rope was easy thanks to having forceps. 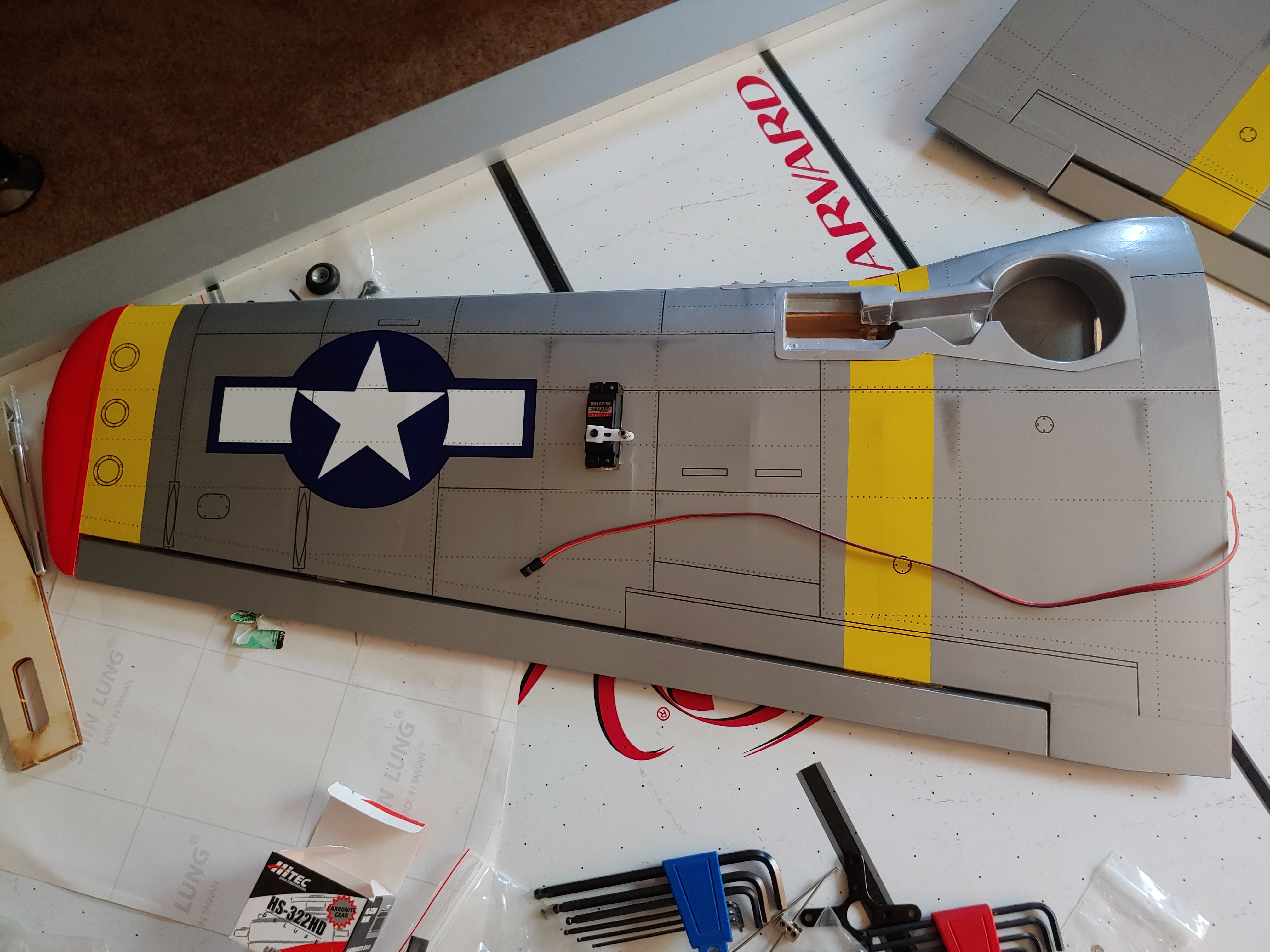 I think the wing assembler decided to max out their roll of rope here.... 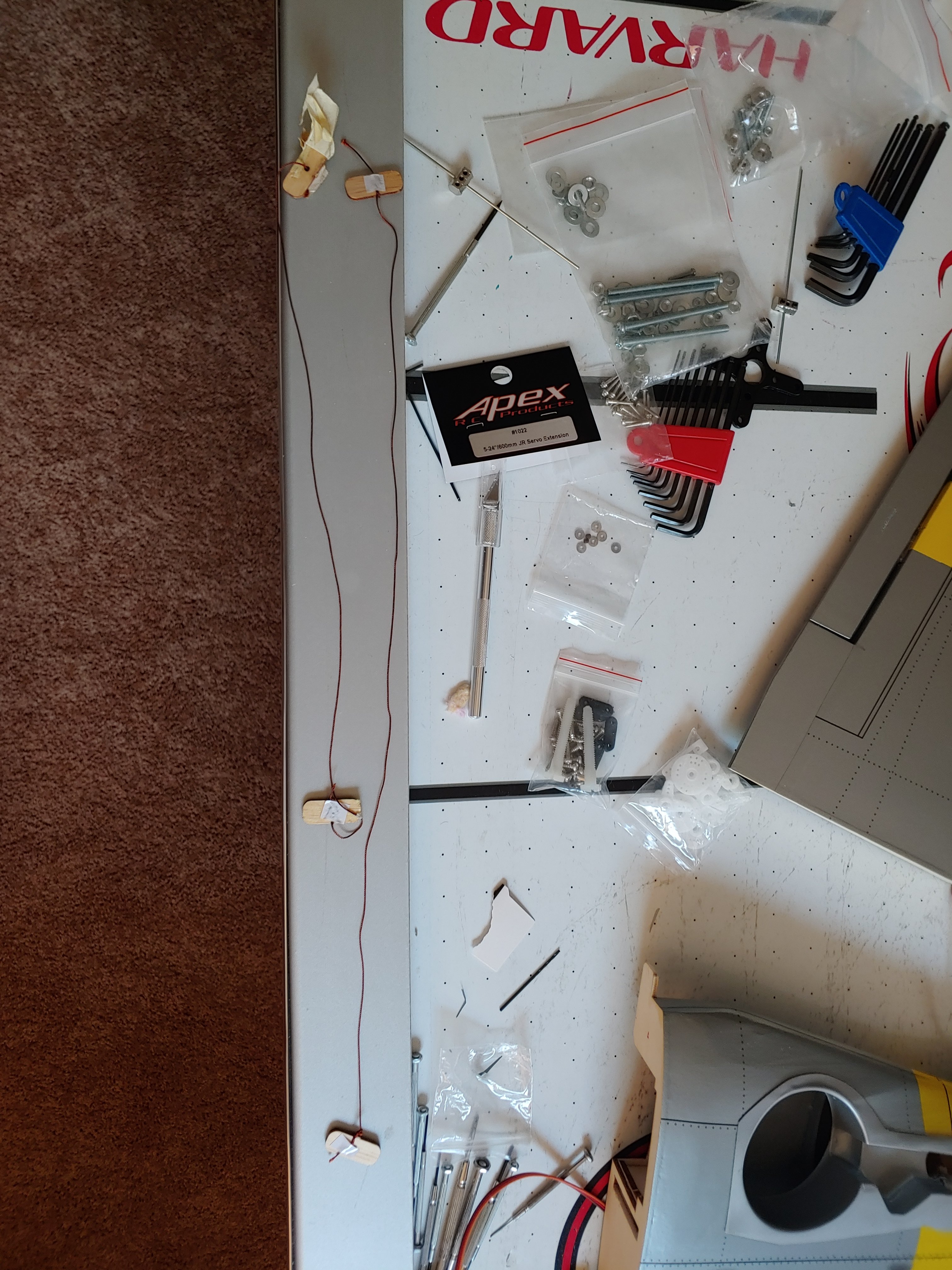 #7
Start work on the firewall. Going to use some washers to create the thrust angle. 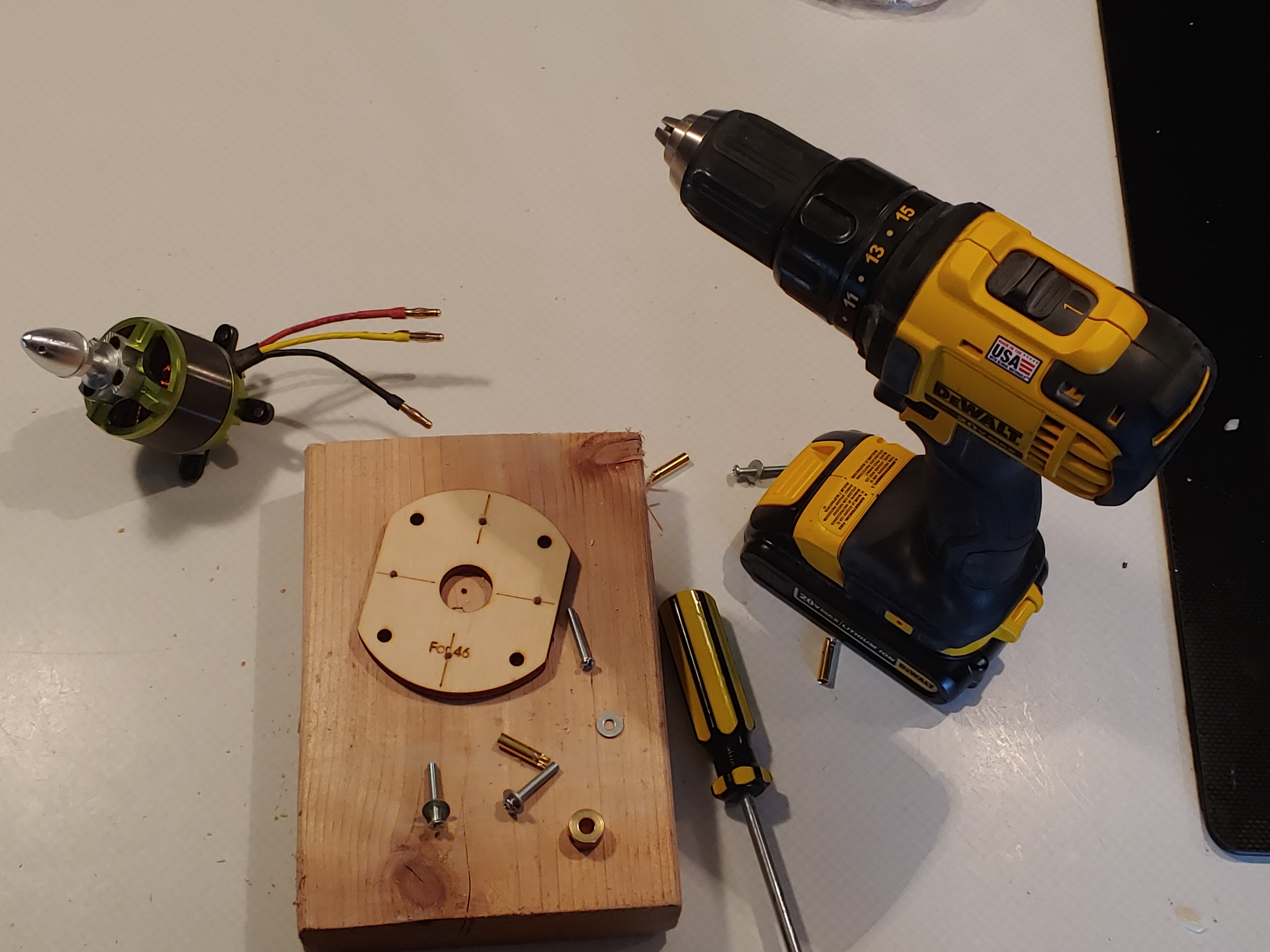 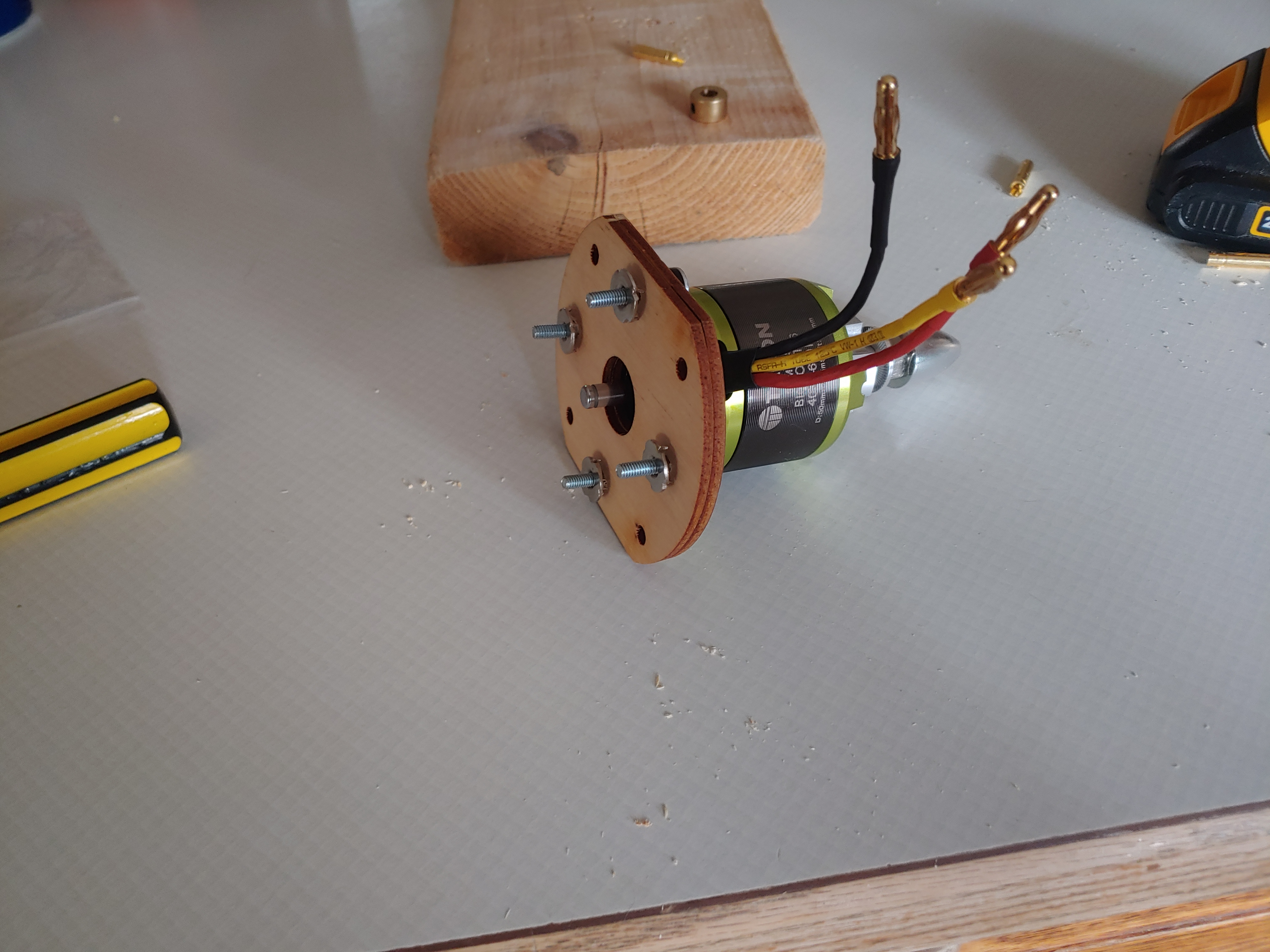 Fire wall done, glad I didn't need to thread that: 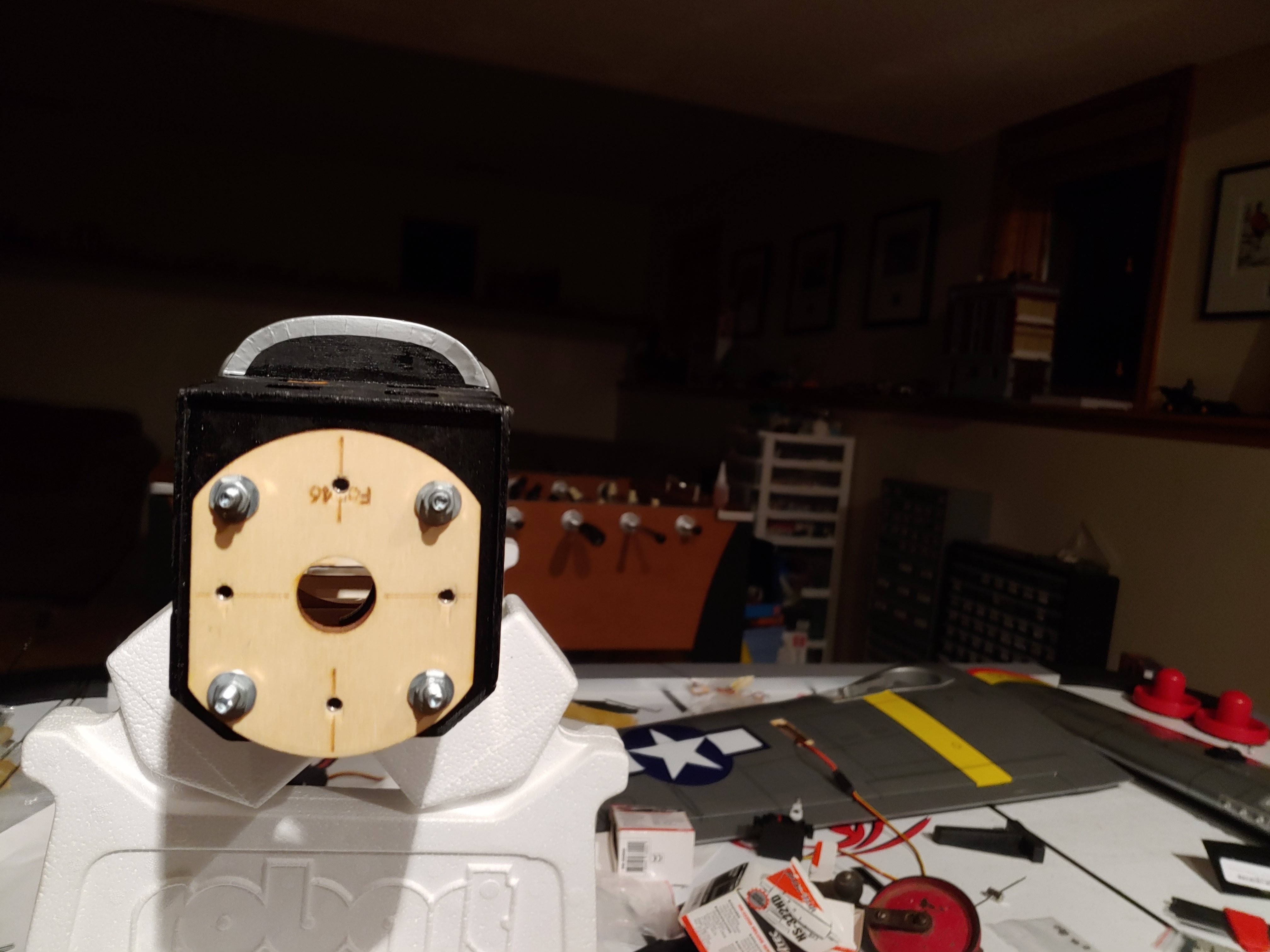 Mentor
#9
Did the servo extensions have a little locking tab that grabbed the servo connector housing to keep them firmly together? If not, its a good idea to tape them together, or tie them together with string, or something to make sure you don't have an unexpected separation in the future. I know they seem to plug together nicely now, but after taking the wings on and off a couple times the servo wires do get tugged, and worst case is they slip lose enough that they disconnect while in flight some day It's a horror story that I haven't personally experienced, but have heard many times.

#10
rockyboy said:
Did the servo extensions have a little locking tab that grabbed the servo connector housing to keep them firmly together?
Click to expand...
No, that is why I am using medical tape.

Mentor
#11
Dreamy_Bongo said:
No, that is why I am using medical tape.
Click to expand...
Perfect! Good 'ol 3M Blenderm Medical tape is a necessity in a well stocked RC tool box

#12
rockyboy said:
Perfect! Good 'ol 3M Blenderm Medical tape is a necessity in a well stocked RC tool box
Click to expand...
Might also take some of my nephew' s hockey stick tape and see if that works.

#13
Got the servos installed: 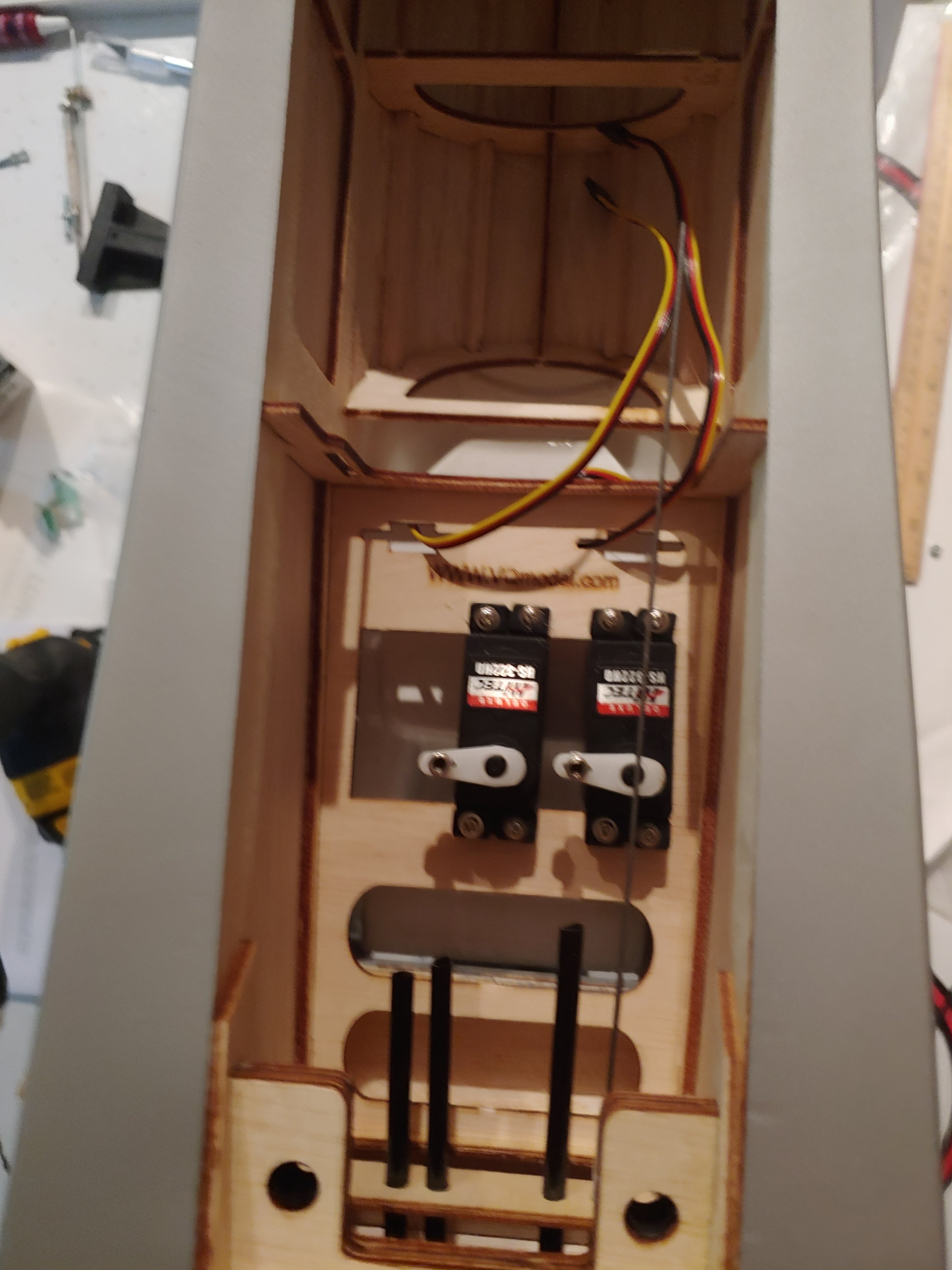 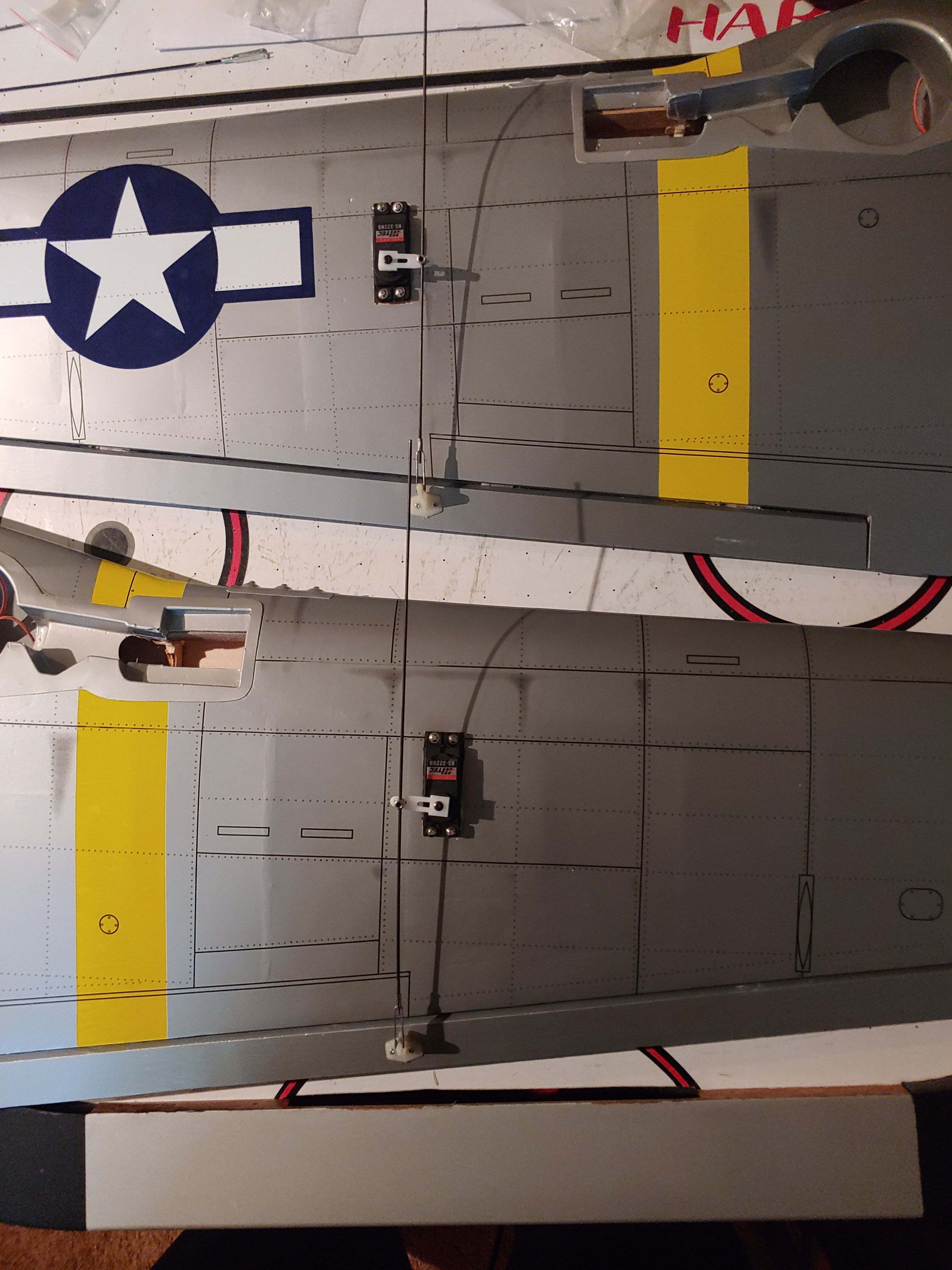 Motor is test fitted, and most of the holes are ready for stabs: 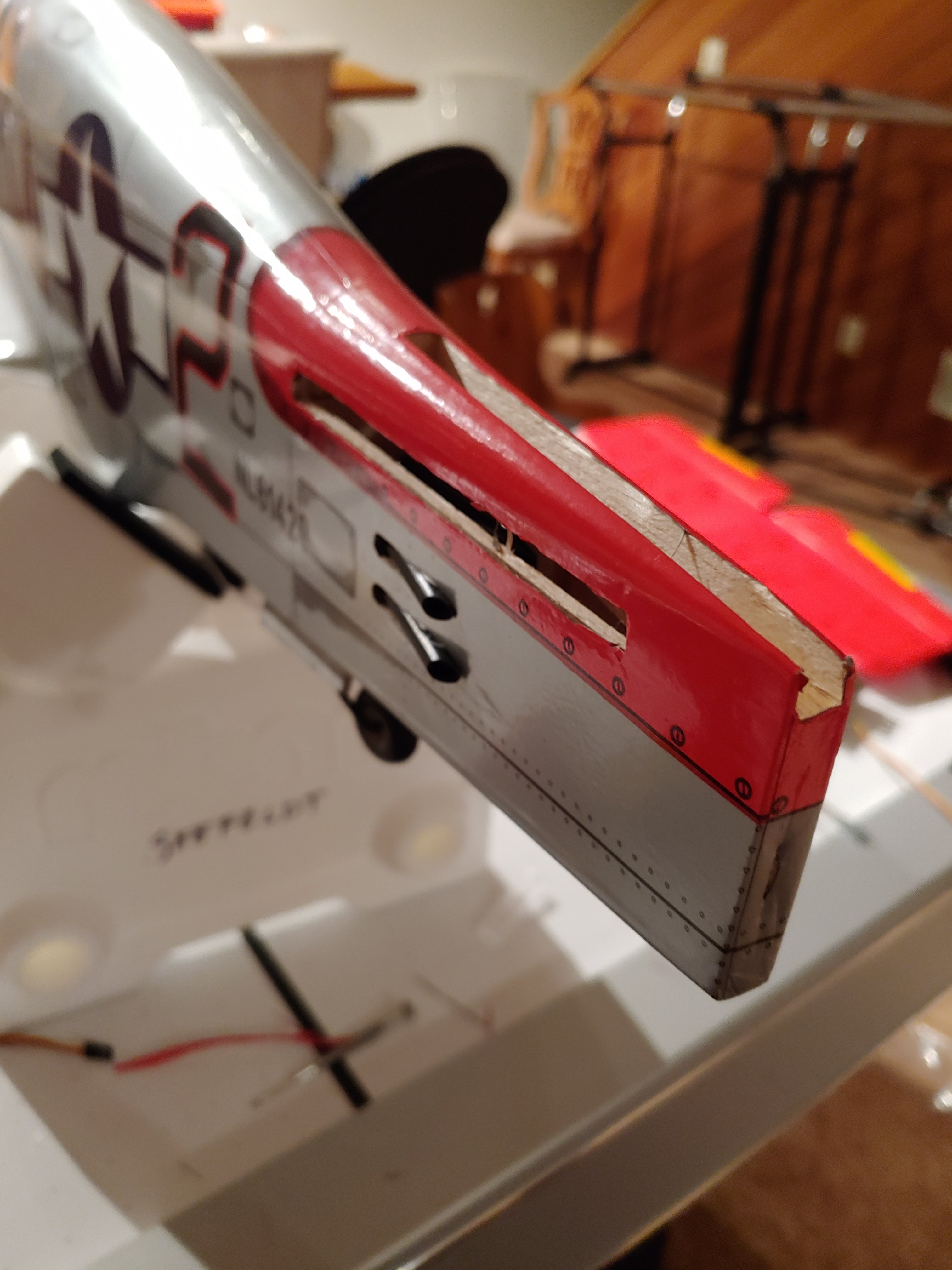 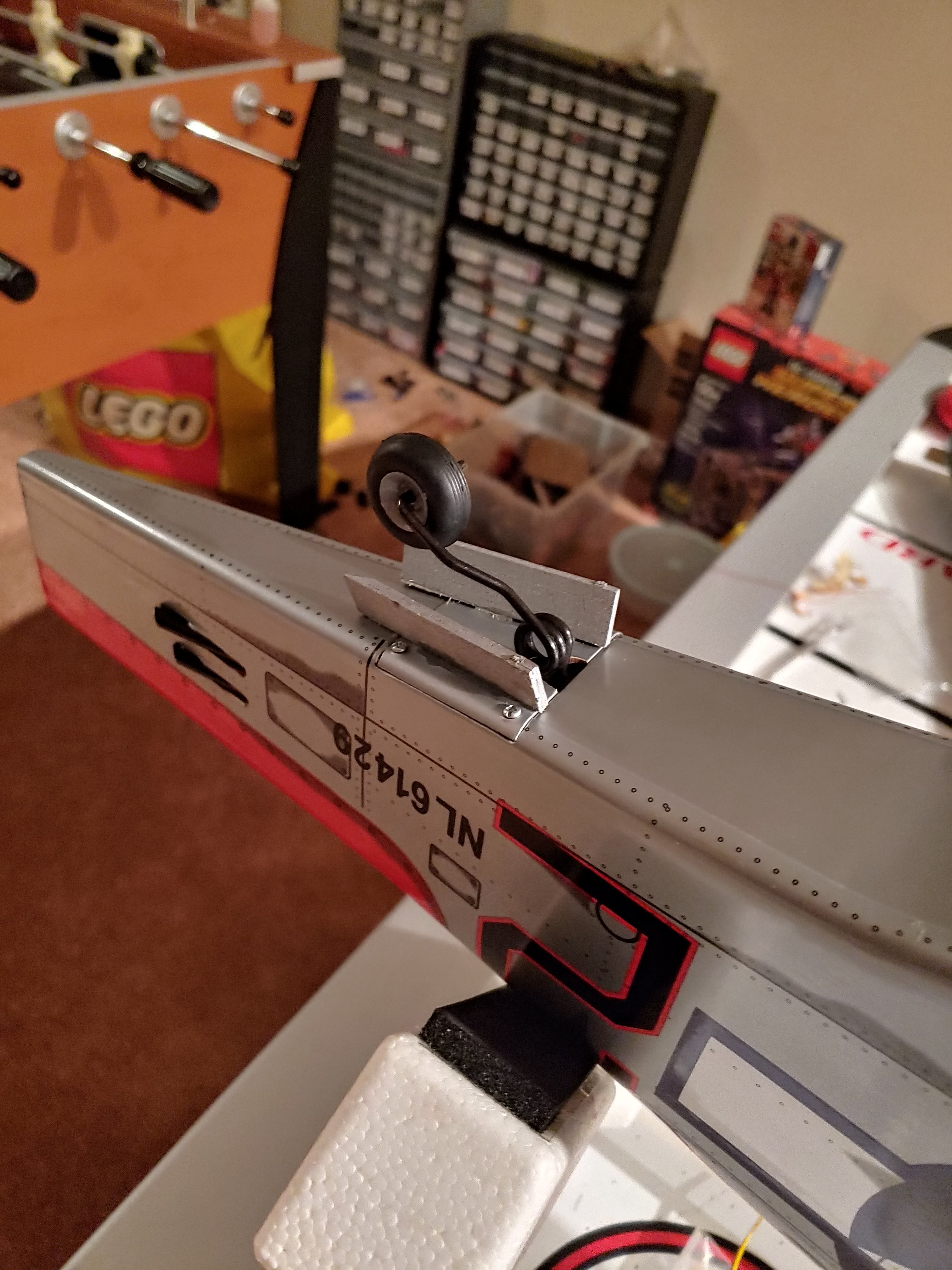 Now I hae to get the control surfaces off the horizontal stab so I can slide t through.
Last edited: May 23, 2019

#14
Aligning the horizontal stab. Should be fun. 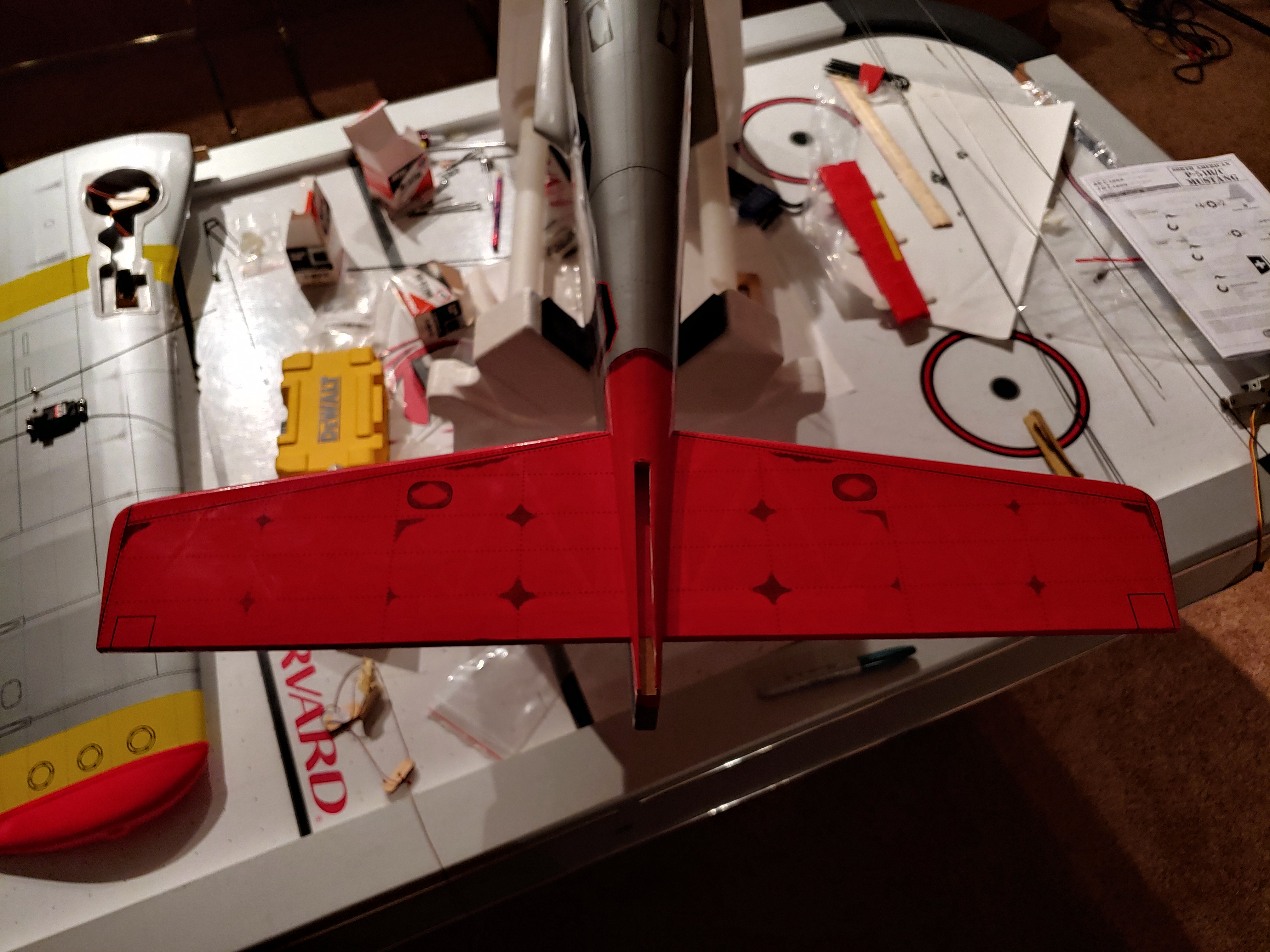