What is everyone's opinion of the new FT radial motor?

Mentor
#41
I gotta ask about the fins to draw cool air up through the motor.

Are they one way?

The description in the article says the 1806 is a CCW motor. This makes me think the fins to cool the motor may not work correctly if I reverse the motor for twin engine plane or for a copter.

Any guidance on reversing these?
Last edited: Dec 4, 2018

#42
buzzbomb said:
The consensus thus far seems to be "I don't know." I say, if you've got a spare couple bucks lying around, buy one and let us know how it is.
Click to expand...
Sure thing Buzzbomb thanks.

#43
Ok I must have missed the "if you break it they replace it" warranty somewhere in the listings, but, anyway.

Pricey motors for foam board. (unless they really are warrantied forever?)

I've been using a lot of the ValueHobby motors lately, and of course, the good old amazon cheap-o's like racerstar or Silver / gold clones.

Mentor
#44
I haven't seen anything from Flite Test or Amain about a warranty either.

Staff member
Moderator
Mentor
#45
The information I've recieved about the warrantee was directly from Josh Bixler himself. I have not seen anything in the current PR releases as of yet, but frankly there isn't much in those releases so far either.

From what I've seen from these motors at FFTX, Without the warrantee, they are pricey but worth it. With the warrantee, it's a killer deal and the kind of product FT strives to provide.
J

#46
I contacted FT support and this was their response:

Dec 4, 11:59am​
I spoke with Josh and he said it's a limited lifetime warranty. It will be warrantied for normal use wear and tear
You will just need to send it back and we will send you a replacement
J

#47
Grifflyer said:
Yeah I know, but in the picture of the article they have a 2218 1180kv motor which I'm guessing will replace the old C pack motor, but there aren't showing that motor in the store.
Click to expand...
If you go to the FT store and do a search for Radial motors it will list all 3 motors. It does not come up when you use the menus. I have contacted them and let them know so hopefully soon it will come up on the menus.

#48
Jimun said:
If you go to the FT store and do a search for Radial motors it will list all 3 motors. It does not come up when you use the menus. I have contacted them and let them know so hopefully soon it will come up on the menus.
Click to expand...
Thanks!!

#49
I am going to wait to see what they offer for quad motors as I am looking at replacing the lumenieers on my alien.

I was going to try hypetrains but not a fan of open bottom motors like they made them.

I will assume the bells are milled so the "fins" to move the air are bi directional since any motor may need to turn either direction dependant on use.

I have moved to exclusively flying emax motors and I believe these are made by emax so that is a plus for me. So if this is the case these may be what I will change over to on my alien.

By the sounds of it, the new FT Radial has design advantages over EMAX. Isn't that worth the $1 more?

I'm new to all this so plan on just going through the FT Store. From TX to RX to planes they seem to be right in line with pricing. Am I missing something? Can the EMAX MT1806 be found for that much less?

#51
The question is, who is going to buy one and do a comparison between the Radial and the old one. You know, measure thrust, amp draw etc.
S

#52
I found that an 1806 pulls a bit more than 12A with a 6x4 on 3S ahd had quite a lot of power, although I can't say how much. My question is, how much is too much current and/or heat for these motors? There are no specs listed for maximum current, nor a listed maximum temperature.

#53
Look what came in the mail today 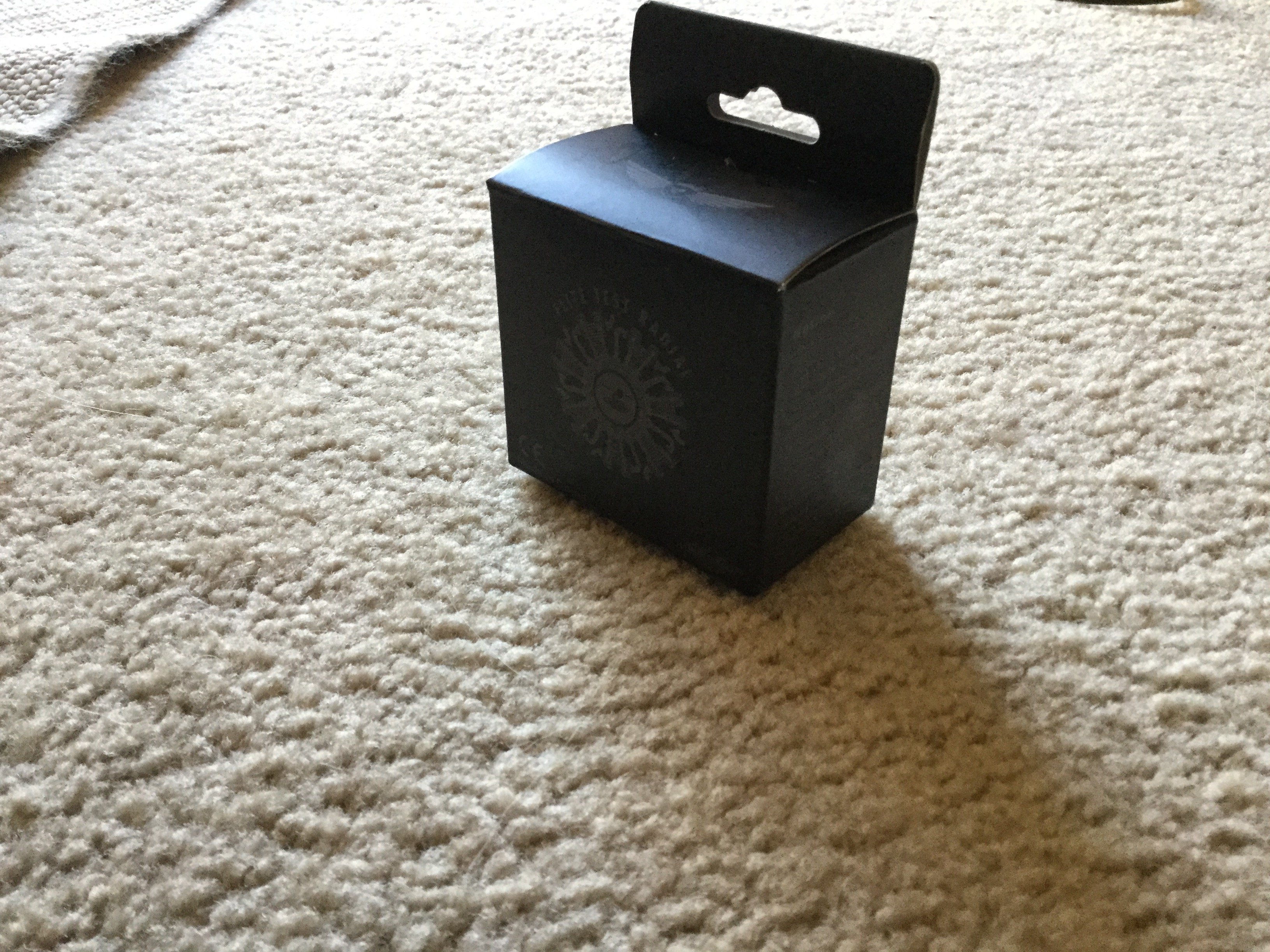 Here's the motor itself. 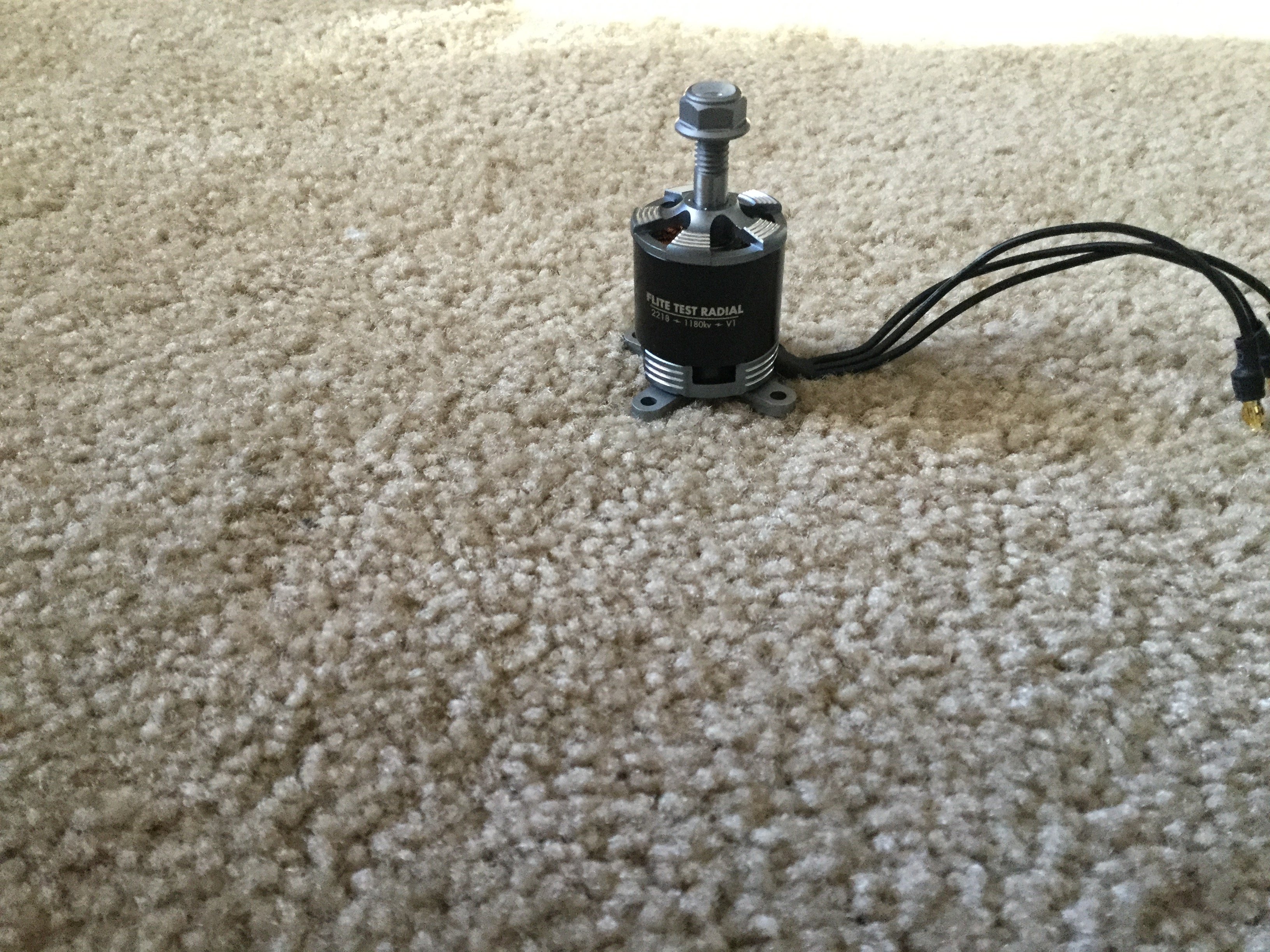 Opening it up everything was very well packaged and I was pleased to find that there are 5 of each screw. The motor itself spins nicely in your hands and everything feels very strong and solid. Even though the motor has a larger stator it's almost a bit smaller than the older Emax motor. 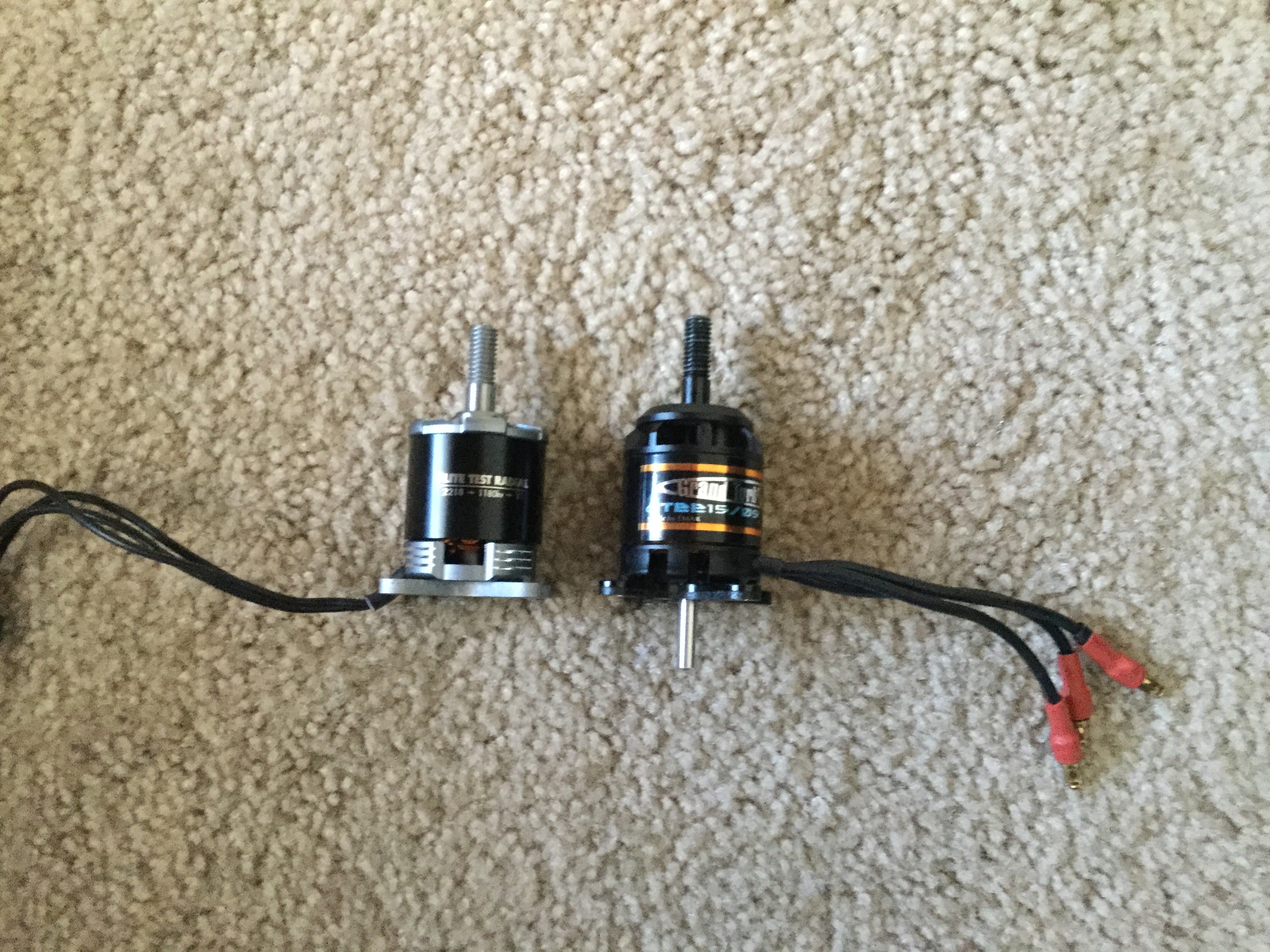 I mounted it onto my spacewalker to get a feel for it, and with a half dead 3s pack it felt a lot more "peppy" just taxing around compared to the older motor, I don't have a thrust stand to measure anything but I'll report back to the thread when I get to put her up in the air to see how it feels.
J

#54
Anyone have some thrust test info on these bad boys?

#55
Before you start trashing FT products like the radial motors - perhaps you should take a good look a the video Josh made where he explains how and why they developed these new motors. I, for one, have lots of those HK and other motors - but I always buy 1 spare per 2 motors - because the quality is just not there. I'd rather pay for quality, have it locally sourced (U.S.A. not China), and mostly, like others have said, to support Flite Test. I'll order the radials, next time I need motors - that's for sure. In fact, take a look at their new store - who needs HK ? Flite Test will stand behind their products, I'm quite sure. Just remember: you always get what you pay for and support Flite Test at the same time.

#56
I'm also a little confused about the lack of specs on the radial product line. They're being sold at a premium and as a more premium motor, but there's a lack of specs on them. The 2205, 2212, and the 2218 all have the same rated thrust, "Incredible Thrust Output", and "over 1kg on 4S". Without rated power, no load current @ voltage, and phase resistance, we can't even simulate what sort of output each will give. I was thinking about picking up a 2212 but I'm not sure if it would be a significant upgrade in efficiency and power over some cheapie turnigy I have. I'm somewhat sure it is, but is it twice the price better? Having specs would certainly aid in the decision making process.

EDIT: Well I ordered the 2212 after vacillating between that and the 2218 all morning. I have a thrust stand so we can compare it to the cheapie turnigy model 2826 which is I think slightly smaller.
Last edited: Jan 28, 2019

#57
NicholasJacobs1958 said:
Before you start trashing FT products like the radial motors - perhaps you should take a good look a the video Josh made where he explains how and why they developed these new motors. I, for one, have lots of those HK and other motors - but I always buy 1 spare per 2 motors - because the quality is just not there. I'd rather pay for quality, have it locally sourced (U.S.A. not China), and mostly, like others have said, to support Flite Test. I'll order the radials, next time I need motors - that's for sure. In fact, take a look at their new store - who needs HK ? Flite Test will stand behind their products, I'm quite sure. Just remember: you always get what you pay for and support Flite Test at the same time.

Cheers
Nicholas
Click to expand...
I don't think anyone is "trashing FT products" we are just discussing some pros and cons

#58
I agree, I'm not trashing their products either, I just want the full specs. But enough about that because my Radial 2212B 1050KV motor is already here!

Just quickly, the motor is really pretty and I love the product line name "Radial" so way to knock it out of the park on that. The packaging is fine, a cardboard wrapper around a cut foam insert and included one prop nylock nut, 5x M3x6 button cap hex, 5x M3x8 button cap hex, 5x phillips flathead, 5x phillips sheet metal (or wood screws with fender bit), and one of those metal mounting crosses. I thought it was a typo on the website, but the shaft diameter is 6mm, no inserts needs for any of my Gemfan props. The wires are 20AWG, 12cm long to the end of the 3.5mm bullet, a little longer than most I've seen. They've mentioned that they "sound cool" in a couple videos but really, they do sound cooler than my cheapie Turnigy. The motor makes so little noise at <50% power that all you hear is the prop munching through that air. Enough about what it looks and sounds like, what are the stats?

The props are both brand new Gemfan SlowFly, just balanced, and yes the numbers are accurate that the 8 and 9 inch props pull almost the same power but produce more thrust on the larger prop. 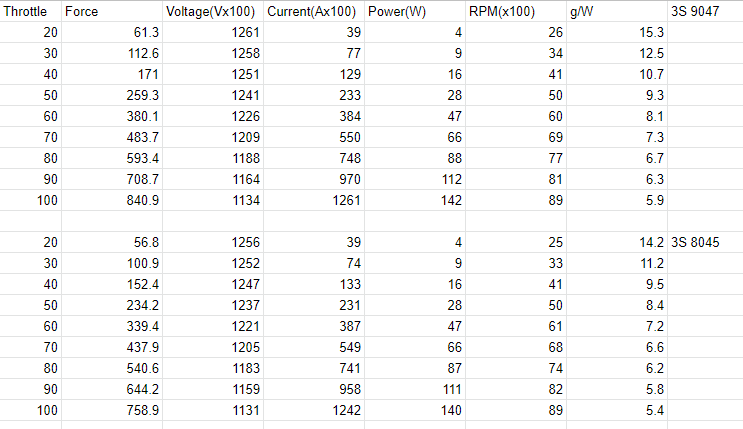 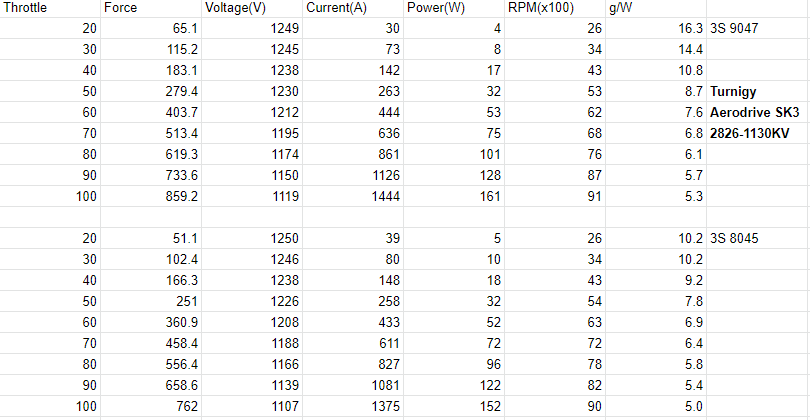 The FliteTest puts out roughly the same thrust, roughly the same RPM, it just does it with 10% less power. Given the 20AWG of the motor wires, I'd imagine they are rated for roughly the same power too <20A (the Turnigy is listed as 17A / 173W). The motors are also identical in size apart from the turnigy having the collet-based shaft and the FliteTest just having a threaded shaft.

** THE ONE MAJOR CAVEAT **
The prop sits 17mm closer to the motor than it does on my old motor. For my FT Simple Cub, the prop is not able to clear the nose. Maybe my Cub's power pack is pushed back a little more than stock due to hitting many things, but the Turnigy cleared the nose by a good 10mm or more. I assume this Radial motor is the same dimensions as the C Pack motor +/-1mm so I'm not sure how that fits normally.

Conclusion: The FliteTest Radial 2212 is a good motor. You'll pay a little bit of a premium but it seems to be more efficient, and you'll definitely get more thrust of of it than the EMAX 2213-935KV that used to come with the C Pack. I probably would have bought the 2218 instead of this one though because I have an 750g model that needs a motor and this is right on the edge of where I'd want it to be, and this is on a fully charged battery.

EDIT: Forgot to say that the weight numbers are also accurate. The Radial with the prop nut, wires, and bullets is 56g compared to 51g on the Turnigy with its prop mount included. So the 2212 size is probably not great for a mini

#59
When are they going to be available in Europe?

#60
I bought two of the FT Radial 1806 motors for use in a couple Tiny Trainers and Mini Scouts that we're building. I agree about the sound of the motors just seems extremely smooth compared to the motors that came with two HK planes that I've had. For just $1 more than the same size Emax the motors seem worth it, though they certainly come at a premium compared to the cheapie motors available elsewhere. And maybe I should go with the cheapie motors for planes that my son and I are learning on given that they will inevitably be crashed!
Last edited: Feb 1, 2019
You must log in or register to reply here.
Share: Facebook Twitter Google+ Reddit Pinterest Tumblr WhatsApp Email Link
Menu
Log in
Register