#1
It's almost ready for maiden. Will just fly it LoS for the time being, but I'll eventually get a boardcam on it! Power comes from a Cox RC Ranger 0.049 engine swinging a Top Flite 6x4x2 wood prop with a 2oz Du Bro fuel tank right on CG to keep things humming along nicely. Futaba R2106GF provides a control link and it's chock full of FT 5g servos! I also have a steerable tailwheel fitted to it and, instead of using the hot glue blobs, I'm holding the main wheels on with some Du Bro micro wheel stoppers. Look quite smart if I do say so! 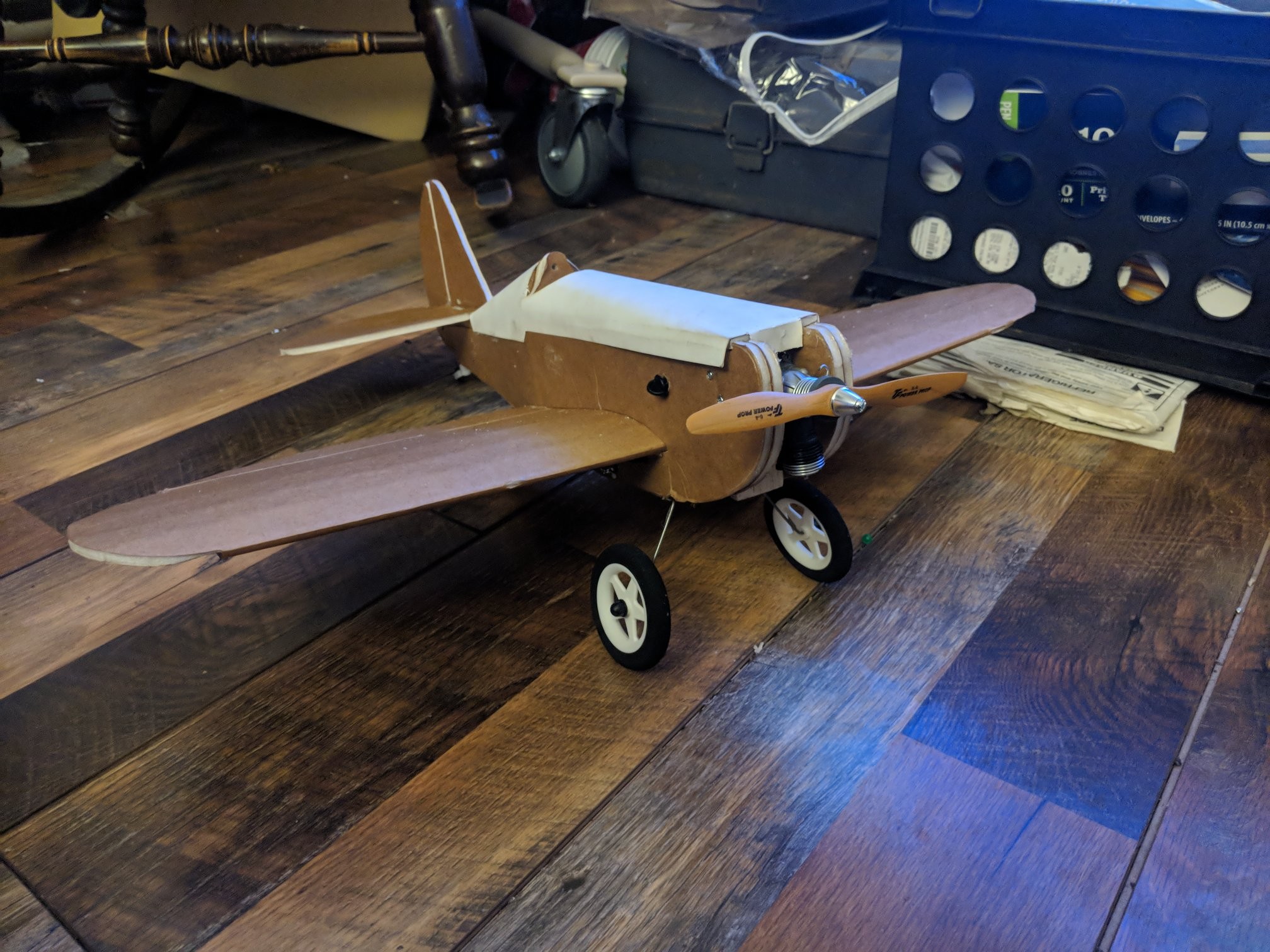 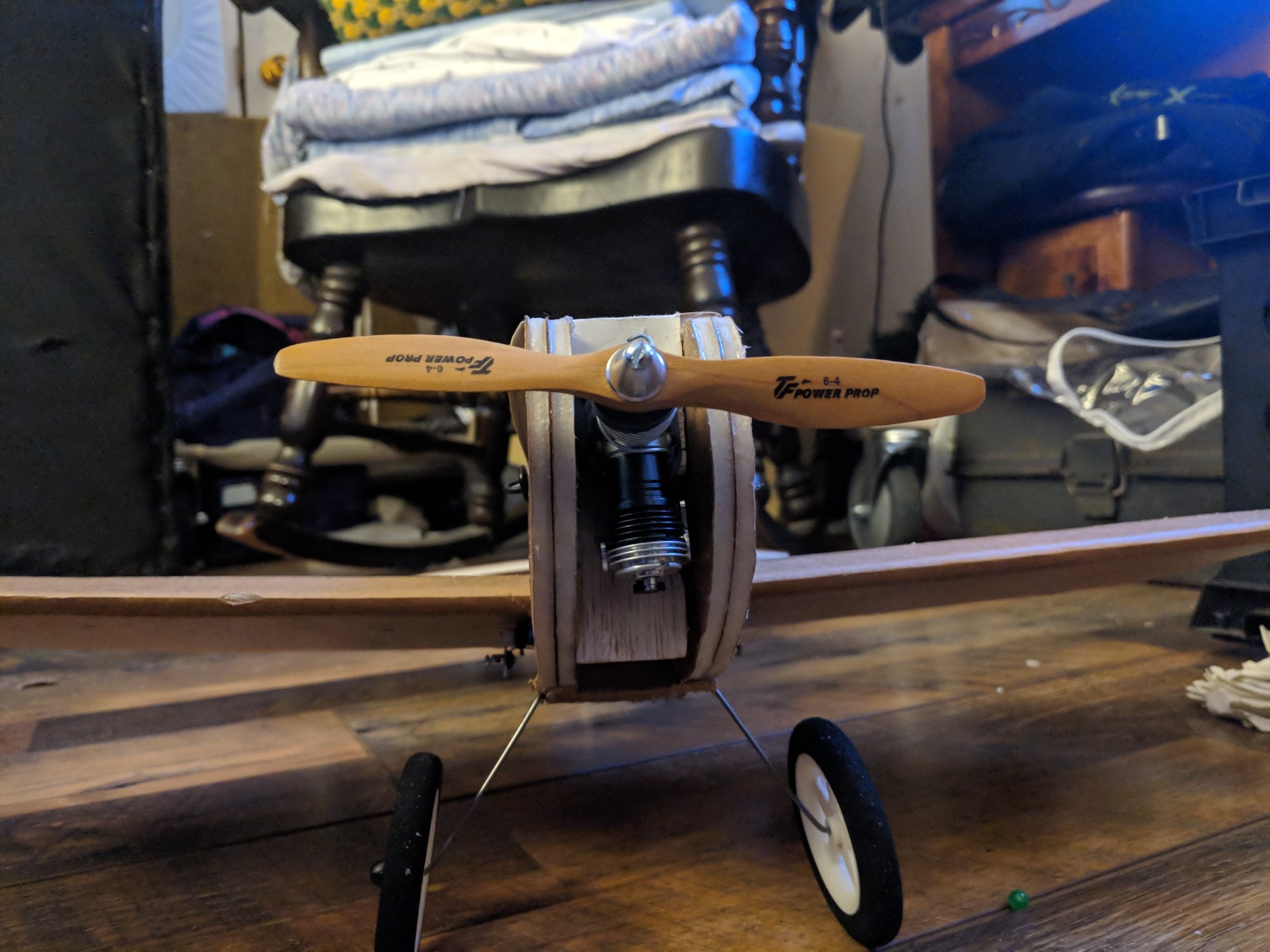 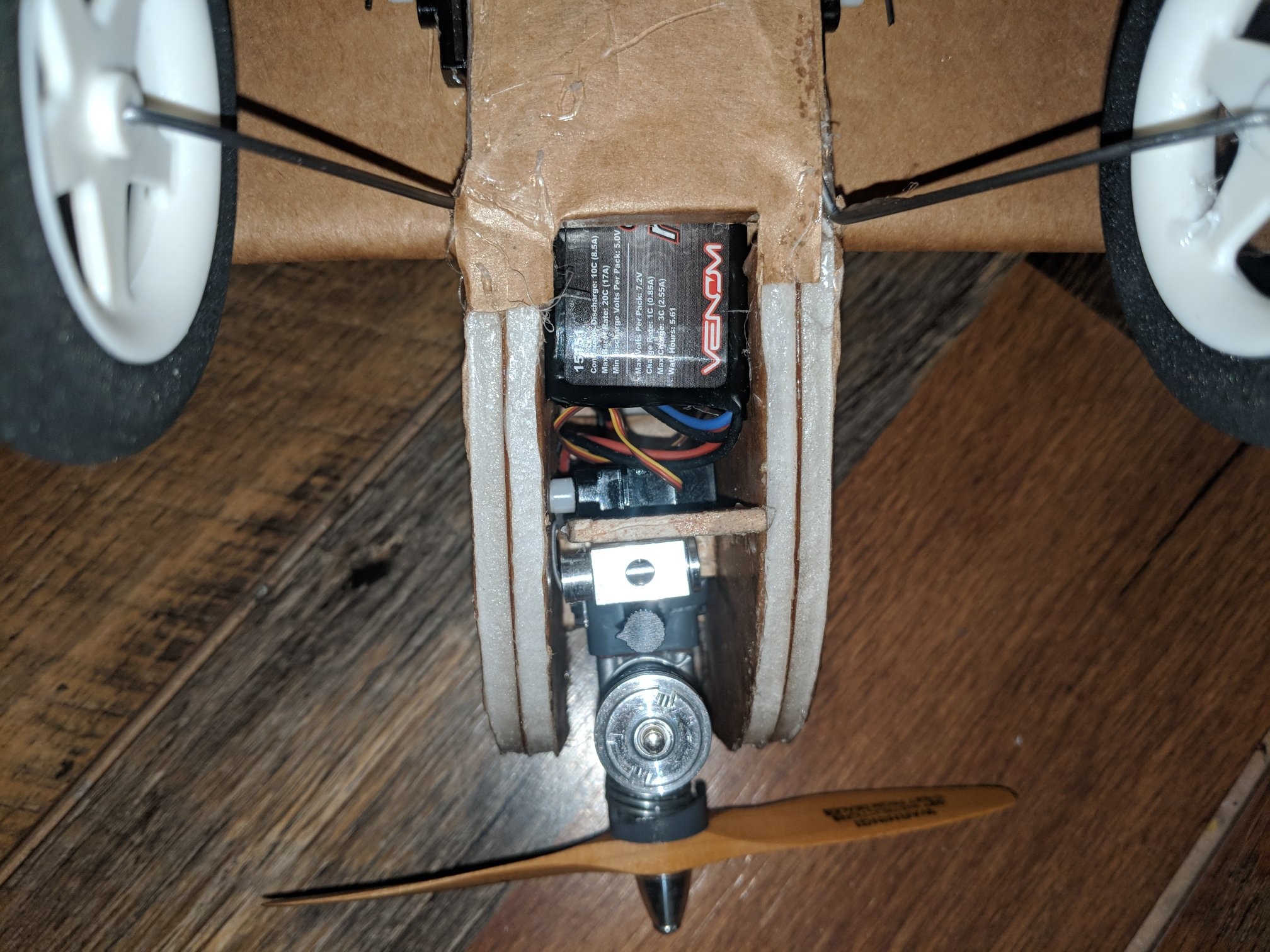 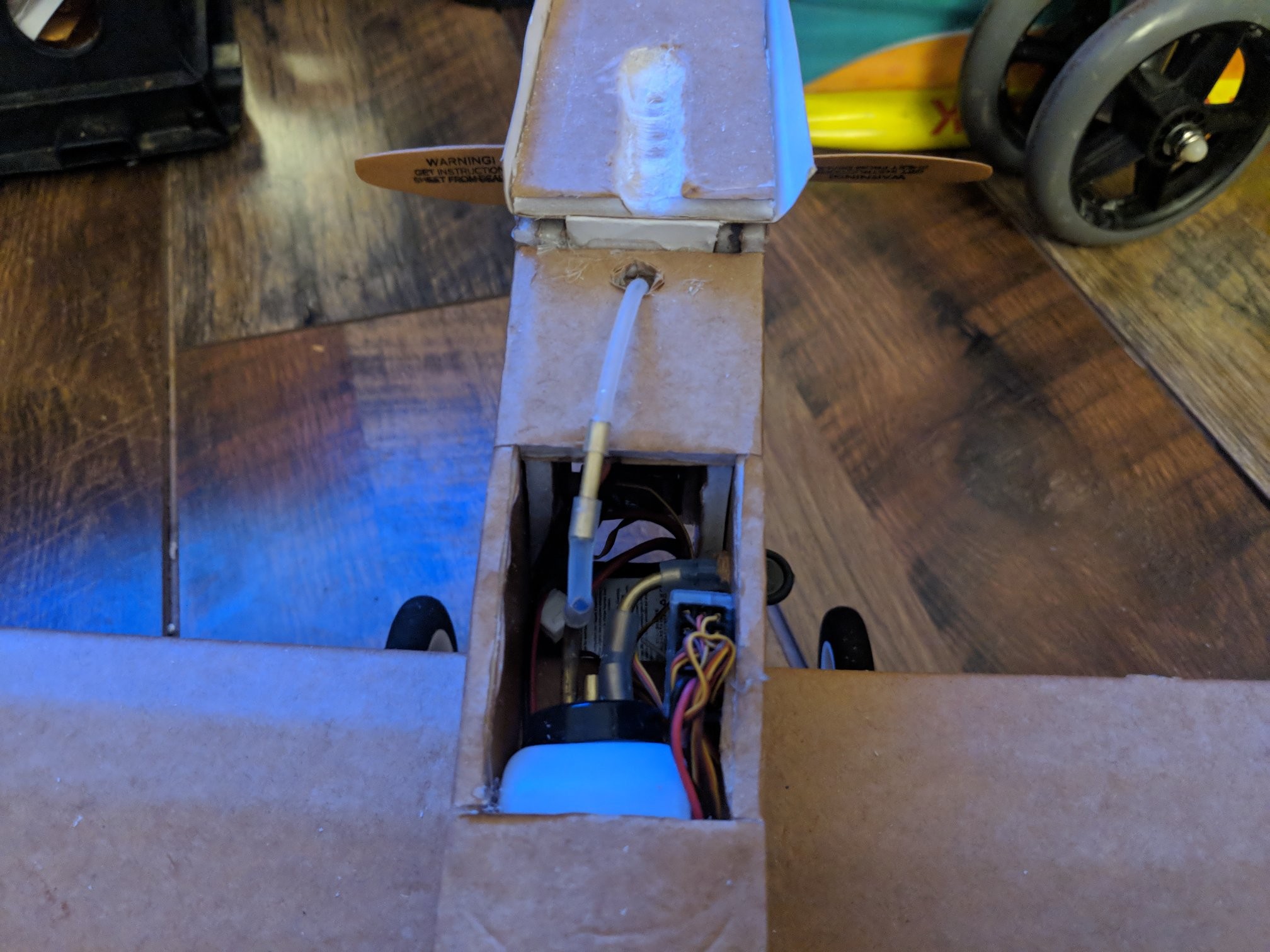 Can't wait to get the engine run in and try to fly it! This weekend's looking great, too, all these pesky early spring storms seem to have given me a window. Two days of 0-5mph wings with mid 60s temps.

Were do yo get those little Cox motors?
J

Were do yo get those little Cox motors?
Click to expand...
https://coxengines.ca/ for brand new, field gear, et-al. You can also get them off eBay used, they've been around for decades haha.

Good luck with your maiden!!!!
J

Good luck with your maiden!!!!
Click to expand...
It fits super well, too, almost like it was designed to be there.

I'm seriously jealous.
did you get a motor kit from Company or did you already have the parts?


is that a good entry level non-electric engine ?
J

#10
P-loco85 said:
that sounds amazing.
Click to expand...
That's only break-in. Just wait till I peak it out and let it scream~

did you get a motor kit from Company or did you already have the parts?
Click to expand...
You have two options for getting one of these engines.

Option 1: Pop over to Cox International and buy one brand new. This is the path I'm going down with mine and it's pretty much guaranteed you'll have a runnable engine, because if these things aren't brand new production they're a reman of existing engines of such quality that they might as well be brand new.

Option 2: Peruse eBay, thrif stores, flea markets, et-al, trying to find some original Cox 0.049s, then pop on over to Cox Intl and buy the throttleable backplate/choketube assembly to put on said engine. Bit of a pain in the rear and you're relying on the rest of the engine you buy sight-unseen being serviceable, but it can be a little bit chaeper if you get lucky.

Frankly, I advise going with Option 1.

is that a good entry level non-electric engine ?
Click to expand...
It is, and it isn't.

These engines are basically the Power Packs of yesteryear. Where today we might introduce someone to the hobby with a Mighty Mini and a Power Pack A, back in the day, you bought a 2ch or 3ch Balsa-and-ply kit(Or even control line rather than RC) and a Cox 0.049. They typically didn't have throttles back then, though you could get them with a restrictor ring around the exhaust ports that would kind of sort of half-arsedly throttle them. Some people even mounted them on free flight aircraft with very small(1-2cc) fuel loads, they'd start it, let it go, the engine pulled it skyward and ran out of fuel letting it glide back down! In a way, this Mini Sportster still holds true to the spirit of Flite Test

If you're willing to put in some time, do some research, and not rush through it, they're pretty easy to work with. They only have one mixture setting that you pretty much set by ear(These things do not mince words, as it were, you'll hear it when they're happy V too rich/lean), they're fairly robust, incredibly simple, and reasonably cheap to repair and replace should one lunch an engine. In that vein, they are very newbie friendly. And they're reliable enough that you'll have no trouble flying a plane on one. Power's pretty good as well, especially considering the design hasn't changed since the early 1960s!

They're not newbie friendly in that they can be incredibly cantankerous from time to time, particularly when they need servicing. You will, on occasion, need to pull the engine pretty much completely to component parts to reset the socket inside; instead of a wrist pin they use a ball-and-socket joint to hold the piston to the conrod and this will open up over time. Cox Intl sells a tool for doing this, and from what I gather it's not a frequent occurrence unless you're really pushing them hard. Used on an FT bird you'll likely only need to do one or two resets over the life of the engine, which if cared for is many many years!

Glow heads are delicate and expensive; push too many volts through them and you just smoke the element then and there. 1.5v is ok, 2v will destroy it pretty much immediately. And because they're so small, they are INCREDIBLY sensitive to dirt. One errant fleck of dust under one of the reeds or in the needle and it's never going to run right until you dismantle it and make it surgically spotless inside. You also can't go shoving any random bottle of fuel down their throats. They're picky and must be fed a specific fuel blend. They love nitro, they love castor oil, remove either from the equation and they don't run right. I run mine on a blend of 24% nitro 20% castor blended specifically for these engines that I source from Fitz Fuels; happily they're so small that a quart of fuel lasts forever.

Oh, and they're loud as *$($. I have a Kyosho Mad Crusher GP with a 0.26cid 3HP engine on a tuned pipe and it's quieter than any of my 0.049cid Cox mills by a significant margin! The engine in the video above measured out to about 75dB and it's not even running at full power; itt'l be louder still when I peak the needle out. Be sure there's no noise restrictions where you fly before you commit to buying one and building a plane for it.


If you're ok with having to kind of go out of your way to source fuel and periodically dismantle the thing to keep it happy, then yeah, it'd be a fine little motor for ya, and one of these RC Rangers will fly any Mighty Mini with grace and ease. It won't have the vertical of a PP A or PP F brushless setup, but it will be powerful enough to comfortably fly the thing, and propped right it will still be quite fast. I'm expecting something around 50MPH or so out of my Mini Sportster on a 6x4 prop! Calculators say 17,500RPM(Well within reason for this engine in flight) is good for 59MPH, factoring in drag, prop slip, and engine performance being a bit lower than ideal since I set my engines a bit richer than they truly want to be, 45-50MPH is a good realistic estimate for flat out top speed.

https://www.coxengines.ca/files/review.pdf <-- a good read on the performance of these engines.
J

#11
Ran it again today, got it peaked out, throttles like a dream. Might make a slight adjustment to the throttle linkage but other than that I'm quite happy with that. Got a vid uploading too.

Also ran it from full to empty at wide open to test duration, find out what my timers should be. As it turns out, if I fly it firewalled the entire time, I'm good for 23 minutes 55 seconds of powered flight. So realistically, set for 20 mins, fly normally, prolly land with a quarter tank left on board.
J