I put together the first prototype today, just to find any errors in the plans (there are 19 things I need to change/improve in the next revision).

This plane is designed to fly slow, do STOL, and have tons of flight time.

I think I have a good way to drive both rudders from a single servo within the fuselage. I'm also looking into Fowler Flaps.

I'll be trying my hand at making plans as well, for anyone who wants to build one for themselves.

Why are your wings unskinned? Will you cover them in monocote or paper?

#4
I didn't have the wing skins ready at the time and they weren't that critical to the goal for that craft (testing construction/plans). If you look closely I did skin small sections where needed (Near the fuselage attachment and engine pod/wing joiner). I'm currently laser-cutting Rev. 2 of the plans, which will be a glide testing vehicle, possibly testing some landing gear configs as well. After that, I'll slap some electronics in Rev. 3 and see how it flies!

The goal of the raised pods is to get a lot of airflow over the top of the wing. Higher velocity = lower pressure, which means more lift at low airspeeds (See YC-14).

Finished up the second development craft today, found some more minor kinks in the plans. Airframe dry weight was 315g. CG as per glide testing seems to be at 3.25" from the LE, or around 40% chord, which seems a bit far back.

Fowler flap proof-of-concept using the same technique.
Click to expand...
I like the clever rudder servo idea. I suggested something like this to someone a little while ago for their F22 but this is far more elegant than my suggestion. And I am very interested in the Fowler flap mechanism. You seem to be trying for a relatively simple way to do something that is actually difficult to achieve. I hope it works as well as it looks.

A video showing the flap in action would be awesome.

#9
Here is another version of the twin rudder setup minus the weight of the control horns. Works well on a A-10. 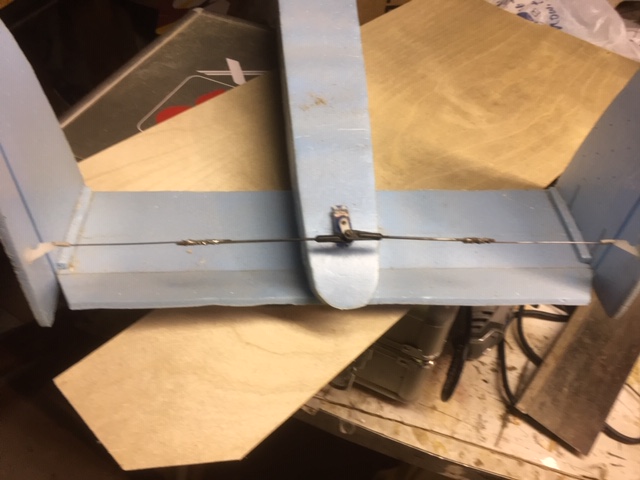 Also I made a YC-14 with 64 EDF's that had a T-tail where the whole elevator move. Changed tail and it improved shortness of takeoff and landing. Will be interesting to see if flaps will work. Suggest you use larger prop with flaps.

#10
I hope it works as well as it looks.
Click to expand...
Me too. It has very little friction at the moment and is pretty sturdy. Of course, that could all change when I put it over a 20" span.
The fowler flaps are intended to be an experimental modification (will not be included in the plans). It'll come stock with optional split flaps.

I'll be making the third prototype without any flaps simply because I'm in a bit of a time crunch and can't be bothered to figure out how to attach the wing (without permanently gluing it) in a fashion that doesn't interfere with the trailing edge. I'm sure it can be done, but my immediate concern is getting this thing in the air - I have to leave for university at the end of the week.

The current system is the typical skewers poking out the sides of the fuse with rubber bands across the bottom, which would interfere with anything deflecting downwards (ex. a flap).

The battery tray will be removable in the next version, since it has to be really far back in the fuse to balance correctly, which makes it hard to reach.

I also made some landing gear today, with a free-castoring tailwheel. Steering will come from differential thrust or slipstream over the rudders.

I put some washout in the ailerons, just in case. Differential thrust is also pretty much required unless you devise a servo-driven tailwheel, as there is very little slipstream over the rudders.

I overshot my weight target by around 10% (AUW is 760g), due to heavier-than-expected electronics and beefing up the landing gear.

#12
Flew it twice today, video of questionable quality below.

First impressions:
- Flies really slow, generally achieves the goal of STOL / slow flight (even w/o flaps).
- Doesn't need ridiculous control throws. The ailerons are surprisingly effective.
- Needs a decent amount of di/polyhedral to counter the fact that the center of mass is above the wing.

#13
Flies a ton better with dihedral.

#14
I was never really happy with how this thing flew. It always seemed a bit on edge in roll which is a result of some design choices I made:

-A low-wing is naturally unstable in roll
-Using the propwash over the top of the wing with the coanda effect works great for slow speed flight, but it keeps flow over the center section attached while the outer sections stall
-There isn't any washout in the wing whatsoever, compounding the tip-stall problem
-The ailerons are rather small as compared to the overall wing area, decreasing their effectiveness

So as a band-aid solution, I've enlarged the ailerons and added vortex generators to the outer wing portion. We'll see how it flies.

To solve these problems good and proper, I'd have to move to a high-wing design with externally blown flaps and larger ailerons.

#15
Test-flew it today. The VGs worked wonders - I can't get it to drop a wing even at full back elevator. The flight characteristics are a bit more than satisfactory at this point. I'm unsure if I'll be doing a version with flaps, as I've already mentally comitted myself to one of many other projects on the back burner. If I do actually finish this design I'll make some proper plans and a build guide / video. Until then, here's a folder with all the files related to the project, which includes Sketchup Files for the CAD and inkscape files for laser cutting.