#1
I'm getting the last few pieces of my first quad this week and am going through and making sure i got all the wiring figured out before i start soldering.

Working with a 3 board stack
-Rush Tank VTx
-matek f722-std
-japalura power dist. board
a Caddx Ratel camera and a lemon RX diversity satellite mounted to the frame.

I'm pretty sure i got most of the wiring out but the VTx and Cam wiring, specifically OSD and Smart Audio is giving me some confusion.

I don't see where I should put the OSD and ground from the camera on the FC, are they for a dedicated standalone OSD board 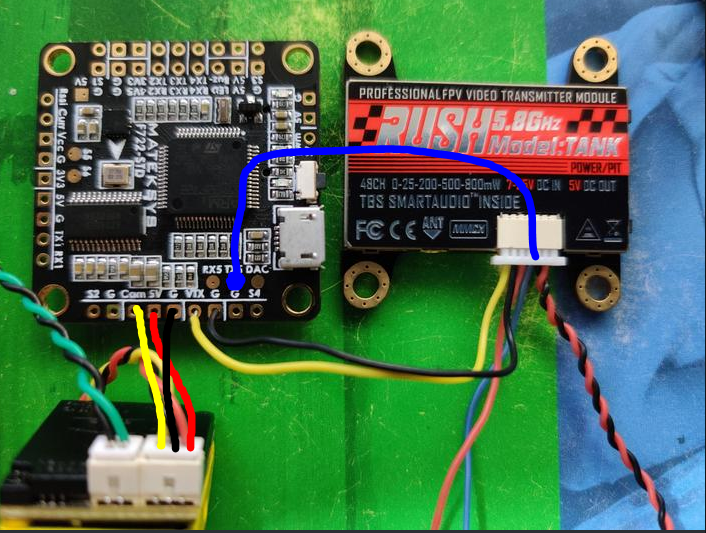 #2
You don’t want the VTX power to come off the main battery lead, you want a filtered power out for that. Genuine Matek power boards have a filtered VBAT out that is great for powering the VTX. I would use one of those, not the copies, buy the newer one shown in the Matek documentation for your FC,p.It has both + and - connections.
If your PDB doesn’t have that and you really don’t want a better one then use an LC filter off the main battery connection, it’s a little inline board that cleans up the power for the VTX. + and - for the VTX go through it.
The camera should be powered by the VTX, the only camera connections to go to the flight controller are the video lead from the camera, which goes to the cam pad, then video and smart audio for the VTX. Video goes out of the marked pad on the FC. Smart audio goes from the VTX to TX5, then enable in it Betaflight on the UARTs. There’s a screenshot of that on the Matek website.
The wires coming into the VTX on the right of your picture look like power in. The other two are power OUT, you don’t want these connected anywhere except the camera. The power connections you have them drawn to are power OUT from the FC. If you hook up both those you will make a feedback loop and cook something. The VTX is already grounded through its power input, it won’t need grounding again to the FC.
You can run the camera wired as you have it, but it’s better for signal to go off the VTX power since it’s effectively double filtered, once on the Vbat pad and again when it gets stepped down to 5v out by the VTX.
Last edited: Jan 6, 2020
C

#3
Darn was really hoping to do this without getting anything else. But at the very least the matek fchub-6s will save me some soldering with that ribbon cable, was cheaper than i was expecting.

So instead of the camera going to the board like below, I'll be wiring it through the vtx and the vtx will go into the pdb via the vcc and gnd pads since it can take vbat.

I don't need to use the camera osd to be wired, osd goes in from the vtx wire?

#4
The VTX will draw power from VCC and ground on the FC Hub, as long as it can take battery voltage, it can either ground there or share the ground on the video part of the FC. The camera will be powered by the 5v out on the VTX, look at the VTX manual for the detail, all you need to manage with the FC is to pass the video through it and get smart audio onto the correct UART and enabled in Betaflight.
Just turn the camera OSD off using the separate camera controller or settings menu, you can ignore that, since you have the Betaflight OSD. It’s not enabled by wiring, the camera ads it (or not) based on its own settings, not the Betaflight OSD via the board.
You can wire it like the Matek diagram, that will give you good clean video. I just had a noisy set up and separated power to the camera made it super clear.
The FC hub is good for separate ESC’s, if you are using a 4:1 esc you need one with a BEC then you wire it to the FC via pads on the bottom for motor control and use the 5v BEC power off the ESC to power up the FC.
C

#5
Got it, had it stuck in my mind that there needed to be a separate pin out/pad for the osd from the FC onboard osd to vtx.

#6
The Betaflight OSD piggybacks the video feed, that’s why video goes in from the cam to the FC then out again to the VTX using the pads.
Thats also why the cam can be dead, black screen, but you can still see the OSD.
C

#7
Just realized, if video, gnd, and 5v out are going into the camera, that just leaves power in, gnd, and sa as available connections on the vtx. Do i use the vtx pad for sa?

#8
Video from the camera DOES go to the FC, onto the pad in the diagram, then video TO the VTX goes back out on the VTX video pad to the plug that goes into the VTX.
Smart audio gives you control over FC and VTX settings from your transmitter, so it needs to go to a UART on the FC, in this case TX5. Then when you do the UARTS in Betaflight select TBS smart audio for UART 5, it’s a couple of columns over from where you do receivers.
The only things you are not doing is 5v out to the VTX from the FC and 5v out to the camera, since you are powering the camera directly from the VTX, both power and ground.
C

#10
Also make a smoke stopper and use it every time you plug power in until you are happy it’s all sorted.

#11
FDS said:
The Betaflight OSD piggybacks the video feed, that’s why video goes in from the cam to the FC then out again to the VTX using the pads.
Thats also why the cam can be dead, black screen, but you can still see the OSD.
Click to expand...
or underpowered, not the camera but the source
C

#12
Finally got around to sitting down and soldering it. All that's left is the radio receiver. I'll make a "first build"  post once everything is done.