#1
I embarked a few weeks back on what I think is a fairly ambitious project. I’ve long been a fan of the Bell Boeing V-22 Osprey. For those not familiar, the V-22 is an “American multi-mission, tiltrotor military aircraft with both vertical takeoff and landing (VTOL), and short takeoff and landing (STOL) capabilities. It is designed to combine the functionality of a conventional helicopter with the long-range, high-speed cruise performance of a turboprop aircraft.” (Wikipedia: https://en.wikipedia.org/wiki/Bell_Boeing_V-22_Osprey) 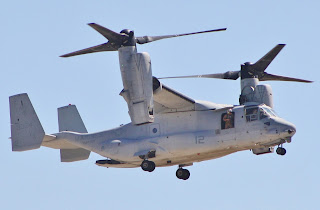 I’ve studied a few commercially produced V-22 radio control (RC) models, but they all seem to come up short. In the cases I studied serious design concessions were made to control costs and the model did not properly reproduce the real-world functionality of the V-22. Here are a couple of my observations: 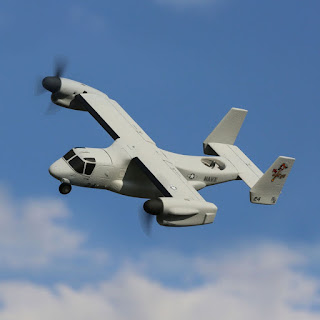 Horizon Hobby, the makers of E-flite, are incredibly popular with RC enthusiasts. They have an extensive line of RC models for land, water, and air operations. I’m not sure of their market cap, but they are probably the largest RC manufacturer in the world.

On the surface, this model looks pretty good. It has a foam body with working tilting proprotors and the price is fairly reasonable. ($230 at the time of this writing for the BNF basic). However, closer examination reveals some significant flaws: 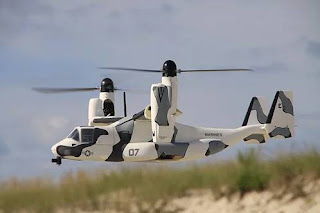 Rotormast is a small niche producer of scale V-22 kits. This model is much larger than the E-flite version and features working collective and cyclic pitch inputs. Each proprotor control utilizes a helicopter-style swashplate. The mixing of control inputs is done via a proprietary flight control package.

This is a much more realistic model, but still has some limitations:

A while back an RC club member gave me a box of parts for the Blade mCPX BL (https://www.horizonhobby.com/mcp-x-bl-bnf-with-as3x®-technology-blh3980) 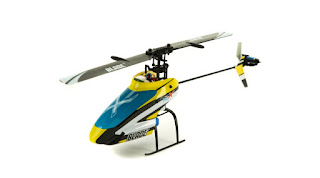 This helicopter is now discontinued, but parts are still available. In the box of parts were enough components to build 2 complete models with many parts to spare. I figure that with these parts I should be able to construct an RC model of the V-22 at a very low cost.

#2
Now that I have a conceptual idea of how to build a V-22 using leftover mCPX BL parts, how do I go about controlling such an aircraft? I own a Taranis X9D+, and it can control up to 32 channels using dual receivers, so that won’t be a problem. I’m sure that I can create a mixing profile in the transmitter to handle just about anything, but I’m also sure that just like any multi-rotor “drone," this thing will need some form of automatic flight stabilization. 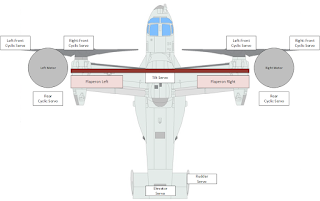 I own a few multirotor aircraft and I’m familiar with how they function. Some research into the popular flight control software (Betaflight, iNav, Cleanflight, LIbrepilot, etc.) all came up short. No one has written code for off-the-shelf flight controllers to manage a dual-swashplate aircraft. I would have to build my own.

I have not delved into writing code for flight controllers, but I have built a number of Arduino projects, and some of them utilize RC inputs to control servos and motors. It occurred to me that I might be able to take the stabilized outputs from the FC and pass them through an Arduino to create a custom mix for the control surfaces.

At the same time, I remembered a gentleman that I follow on YouTube named Tom Stanton. I am always impressed by his projects, especially those concerning RC flight. A while back he developed a largely 3D printed VTOL aircraft (https://www.thingiverse.com/thing:3191118). He ran into a similar case where he wanted to phase-in the main aerodynamic controls as the craft transitioned from hover to forward flight. To solve this, he daisy-chained an Arduino microcontroller between the flight controller and the servos. This allowed him to do some custom mixing in the Arduino that was not possible in the FC board. 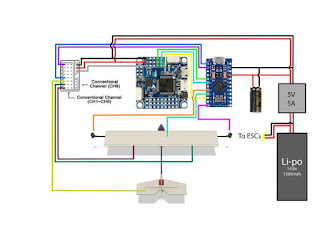 Thankfully, Tom posted his code to GitHub and with some of my own modifications I’m on my way! (https://github.com/TomStanton/VTOL-Bicopter-transition-mixes)


I took the measurements from the stock frame and started sketching them up in Fusion360. After a few test prints to confirm the dimensional accuracy, I created a way to attach the frames to a 15mm square dowel. 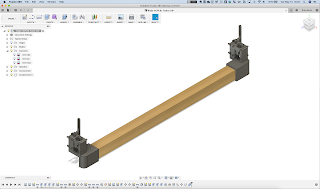 I’m using a Flip32+AIO FC board (https://www.readytoflyquads.com/flip32-aio) that I had in stock. It’s a Naze clone, and already quite old as FCs go, but it should provide enough functionality for this build.

The stock mCPX BL controller has a built-in ESC for the brushless motor, but I will have to use different ESCs since I’m not using the stock control board. I happened to have 3 12-amp ESCs in my stash that should do nicely. They are not the smallest form factor, but should do fine for this prototype. For now I’ve been testing with an Arduino Mega board, but it’s likely I’ll switch to a smaller form factor Arduino for the final craft.
The linear micro servos with the mCPX BL have a JST-SH connector on them. These are very tiny and don’t fit with the standard Dupont 2.54mm servo connections. I’ve removed the JST-SH connector and soldered on my own Dupont connections. 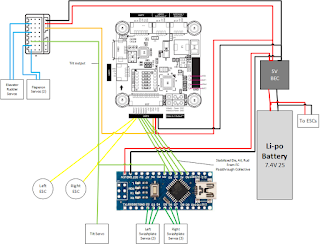 The real V-22 has counter-rotating proprotors with the left rotor turning clockwise and the right rotor turning counter-clockwise (as viewed from above in hover mode). The mCPX BL rotor is setup for clockwise rotation, so no changes are needed in the control setup for the left rotor. The right rotor, however, has some interesting issues:
This leads to an interesting problem. On nearly all helicopters, the control inputs are done from the front of the blade 90 degrees in front of the direction of rotation. This is due to gyroscopic precession (http://www.copters.com/aero/gyro.html). Essentially, the input of a rotating mass (gyro) will have an effect 90 degrees later. Therefore, to pitch a helicopter forward additional lift is given to the blade as it passes the 3 o’clock position. The lift actually occurs behind (90 degrees later on a clockwise rotating rotor), causing the helicopter to pitch forward.

With the right rotor of my prototype turning counter-clockwise and the blade inputs coming from the rear of the blade (90 degrees behind), the controls are a bit weird! For starters, I knew that the collective inputs would be reversed (up is now down), and I thought that all other inputs would similarly be reversed from normal, but they aren’t. Because I’m controlling the blades from the rear and the blade is rotating in the opposite direction, cyclic inputs remain the same as the left rotor.

#4
I had to take a few weeks away from this project while we moved to a new house, but I'm back at it and nearing first flight of the prototype. I've built a little power distribution board to connect the power for servos, Arduino, and flight controller. All of the electronic components I'm using are stuff I had lying around and are definitely not what I'll use on the final aircraft. For now, I'm using:
The all-up weight at this time is 418 grams. For comparison, the original Blade MCPx BL (without battery) weighed in at 48 grams. I have serious doubts this will actually fly at all in the current configuration. 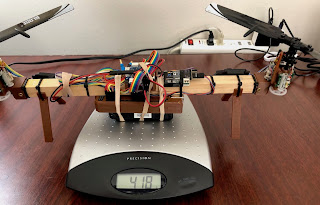 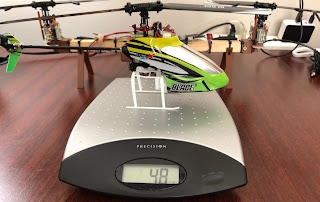 Before any first flight, I need to verify the throws on all the cyclic servos so they match positive and negative travel. The flight controller should take care of small differences, but it's best to start off as neutral as possible.

I'm already looking into replacing many of the electrical components. I'll leave the FC alone for now, but I'll replace the discrete ESCs with a 4-in-1 model that can mount under the FC. I'll replace the Arduino Mega with an Arduino Micro. Only certain Arduinos have the number of external interrupt pins necessary to read the outputs from the FC. I have some Uno and Nano boards, but these only have 2 interrupt pins. For reference, the interrupt pin compatibility for Arduino is here: https://www.arduino.cc/reference/en/language/functions/external-interrupts/attachinterrupt/.

For now, the battery I'm using is a 2S 2200mAh. The original MCPx BL used a 2S 300mAh battery, so I'm way up on capacity as well as weight. I'll investigate connecting some of the smaller batteries in parallel or just purchasing a smaller battery in the 1000mAh range.

#7
This may not be a ton of help but ya i agree i had a v-22 thing. It was more like a bi-copter, not to good. People have had them where they are on servo gears and they work pretty well most of the time.

#8
Pretty ambitious project, that I will be following closely!!