#41
JasonK said:
where did you get the heli motor/collective/etc parts? This is an interesting idea that I might take a shot at here once I have some more time.
Click to expand...
The heli parts came from a pair of KDS Innova 450BD helicopters that I bought from a gentleman for a very reasonable price. I believe he owns this site: (http://www.kdsmodelsusa.com/ENTRY-LEVEL-KDS-Innova-450BD-Combo-FBL-p/kds-450bd-fbl-combo.htm). I actually bought them a year apart, and it looks like they're no longer available. The kits were complete aside from the battery and receiver.

From those kits I used the central assembly minus the tail bits and redesigned and 3D printed new side plates to match the Osprey design. I actually used a photo of the original plates to help place all the mounting holes. I originally used the KDS ESCs that came with the kits, but recently purchased a pair of Castle Talon 60 ESCs to replace them. The Castle ESCs have a proper governor mode. I'm sure I'll reuse the other ESCs in an airplane.

If this whole thing works out, I'd like to replace the rotor head with a 3-blade model. I need to take proper measurements, but I'm thinking a pair of these would work: (AliExpress). I'd also like to swap the symmetrical blades for more efficient ones like this: https://www.rotormast.com/product-page/twisted-blade-set

Recently, I've been able to successfully hover the V-22 around the yard and start to tune some of the control parameters. However, each of these flights is not very long and it has me concerned about battery selection and flight times. The stock 450-sized helicopters recommend a 3S 2200mAh Lipo battery for an estimated flight time of 6 mins. I started testing with two of these in parallel to make a 3S 4400mAh source for the Osprey.

There's no beating around the bush, this machine is heavy. Weighing in at 2lbs, 9.75oz (1186g) without batteries, it's a beast. I've tried to be conscious of weight throughout the build, but with so much structure required for rigidity, it's hard to skimp out on materials knowing that any failure would be catastrophic.

So what's the right mix of battery size to maximize flight time? I had on-hand pairs of 3S 2200mAh, 4S 2200 mAh, and 4S 3000mAh. To round out the selection, I ordered a pair of 3S 3300mAh batteries for testing. I set a couple of timers in my Taranis at 2 minutes and 4 minutes, and with a full battery to start, I took off and hovered around gently until the 2 minutes elapsed. I landed as close to the mark as I could and then recorded the battery level. I took off again and hovered for another 2 minutes and landed again as close to the 4-minute mark as possible. I then took the battery reading and noted it down. Using Google Sheets, I graphed these 3 data points per battery and enabled the trendline to estimate when the battery voltage would drop to a discharged state. 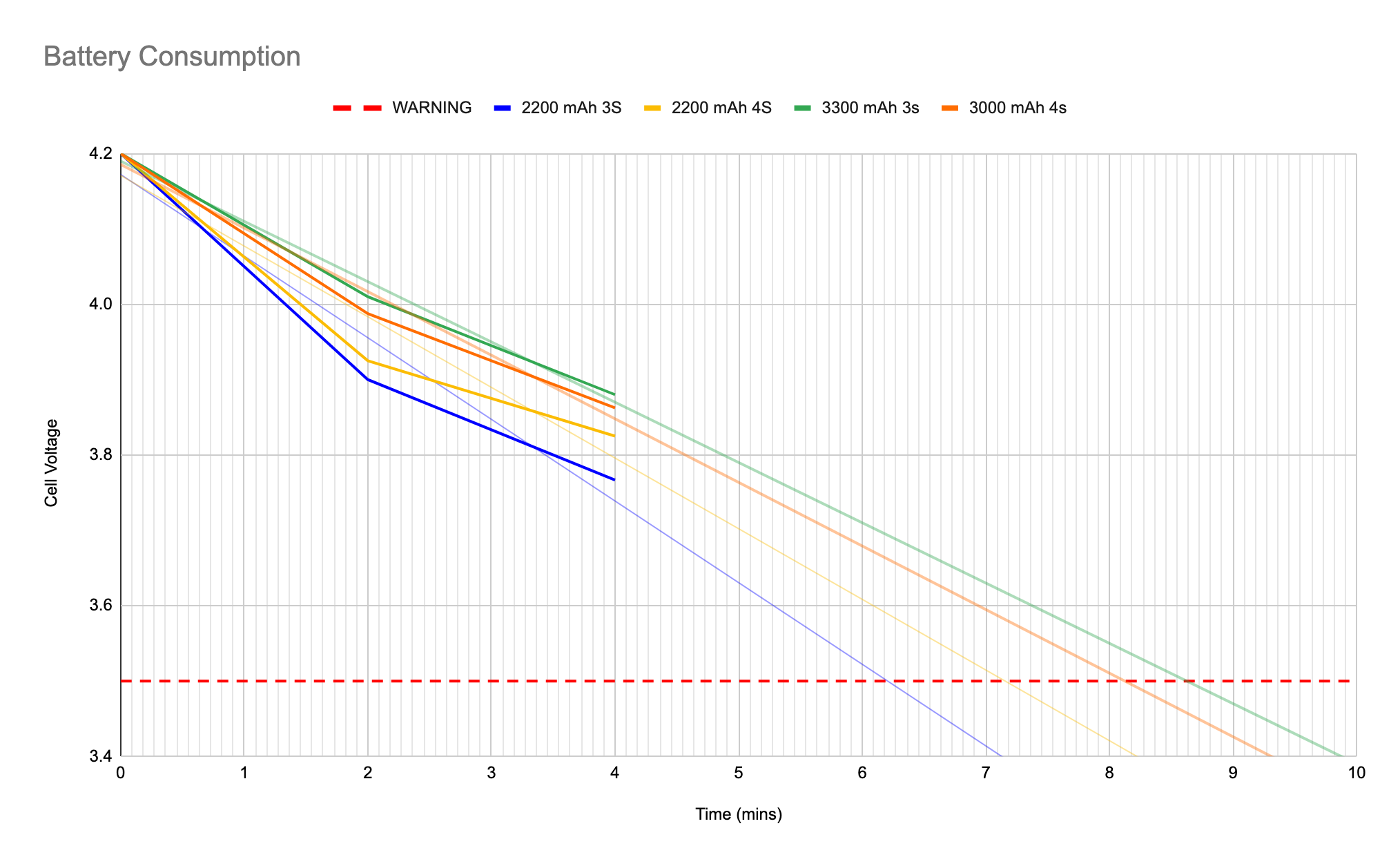 Somewhat surprising, the 3S 3300mAh battery lasted the longest. I had expected more life out of the 4S packs, but they didn't necessarily perform as well. I also compared the expected run-time to the weight of the battery pack to get a "flight time per gram" efficiency number as shown below.

As with any aircraft, the more weight you carry makes the airframe and motors work harder. From my selection of batteries that new 3S 3300mAh looks to be the best bang for the buck balancing runtime and weight.

I also redesigned the wing retention mechanism forgoing the rubber bands in favor of a couple of nylon bolts. I've also been redoing the foamboard fuselage and I ordered the 3-blade rotor heads. I should have an update soon with new versions of those.

#43
Great test with the battery, but might be able to get more refined results on the ground under slightly more controlled conditions. I would have guessed that the 4s (higher voltage) would have performed the best...but I also understand you're using batteries available to you of different manufacturers (another variable possibly affecting the test being their 'quality').

You should also be able to squeeze out a little more flight time by playing with head speed. Rotor efficiency will vary greatly with head speed/blade pitch and you very well could increase flight times by another minute or so. Just be cautious adjusting head speed as it will change the controller's responsiveness. Best to find a nice 'safe' FC tune before running any of those tests, before finally optimally tuning the controller

#44
that 4s has a much lower C rating and weights 25% more itself, so internal resistance could be catching up to it.

however that is only 7-8% more AUW, so I wouldn't expect it to be drawing that much more current. So I suspect it is internal resistance or general wear catching up with it.

#45
Yes, those 4S 3000mAh packs are a bit older and are likely nearing their end of life. I have the governor currently set at 2600 rpm for normal and idleup1 modes and 2800 rpm for idleup2. The rotor pitch is about 2 degrees positive at mid-stick and the craft hovers slightly above that. With 3-blade rotors, I suspect I can lower the rpm a little bit. If I go with curved instead of symmetrical blades it might work well with even lower speeds.

#46
I took the Osprey out to my club field to start testing the transition into forward flight. It certainly got the attention of my fellow club members who were onsite! The first two flights went off without a hitch. I was able to successfully transition the rotors to 45 degrees. I need to tune some additional parameters as the controls became very mushy and not responsive. I think the rotor controls were phasing out before it had enough airspeed to make the flying surfaces functional. On my third flight disaster struck! I had been flying around just fine, but as I transitioned back to hover for landing it suddenly lost control and started pirouetting to the ground. I hit the throttle hold at tree level and it impacted the ground belly first.

At the scene of the crash, I could see that the aluminum tube supporting the right rotor had pulled out of the wing enough for the rotor to flip 180 degrees to the left. I suspect that was the cause of the crash. The left wing broke the carbon spar at the root upon impact. The 3D printed rotor plates broke, but those are designed to be sacrificial. The rotor mechanics seem to be ok. The shafts look straight, no gear teeth missing, and the servos seem fine. The rotor blades didn't even break. When I got home, I opened up each wing and sure enough, the rib in the left wing that retained the aluminum tube had broken and allowed the tube to pull loose. The right wing that broke the spar had actually pulled the spar tube loose from the ribs as well when it broke. Both wings will need a complete rebuild. I've already fired up Fusion 360 to examine how I can reinforce some areas of the wing, shave weight in other areas, and address some issues that made assembly difficult.

The foamboard body suffered only minor damage when it pancaked into the ground, so that is a relief. By the time I get new wings built, the tri-blade heads should arrive from China. I'm looking forward to seeing it with those attached! I'm sad it crashed, but I figured it was inevitable in the process. The real V-22 was almost scrapped due to how many crashes it had. Surely my version would follow a similar path.

#48
JasonK said:
video(es) of the attempts?
Click to expand...
I don't have any, but I know some of the multirotor guys out there with me snagged some aerial footage. I'll try to get a copy and post it.

#49
Sorry to hear about the crash, but sounds like you've got plenty of good data for the rebuild.

Curious your mixing/controller setup? Sounds like you're using a 3-pos switch and the linear mixing/fading from the docs? Any adjustment of controller gains between flight modes? There's tons you can program in now that you know it felt 'sluggish' in transition

#50
Rcjetflyer2 said:
Sorry to hear about the crash, but sounds like you've got plenty of good data for the rebuild.

Curious your mixing/controller setup? Sounds like you're using a 3-pos switch and the linear mixing/fading from the docs? Any adjustment of controller gains between flight modes? There's tons you can program in now that you know it felt 'sluggish' in transition
Click to expand...
I do have the transition setup on a 3-pos switch where up and down are hover and FF, respectively. The middle position gives control over to a slider on the Taranis to allow for manual transition to any point. I was mostly using this middle position to get to 45 degrees. The real Osprey starts mixing in FF controls and fading out heli controls at 60 degrees (90 being vertical). I started with this and wrote my own transition function to effectively create a curve where from 90-60 was full heli, 30-0 was full airplane, and from 60-30 degrees was a blend. I think there are some weird numerical artifacts that are causing roll input to be negated through that transition. I think for the next version I'll create 2 similar curves and offset them a bit where hover controls stay active longer and drop off sharper toward that 30-0 degree mark. The V-22 has such a small wing and high wing loading that the flying controls probably won't be effective until it has significant airspeed.
You must log in or register to reply here.
Share: Facebook Twitter Google+ Reddit Pinterest Tumblr WhatsApp Email Link
Menu
Log in
Register