#1
This build uses 3mm FB but would render quite well in the standard 5mm. The customer has requested a 3mm version, (original), so that is what it will be.
Anyone wishing to render in 5mm just advise and any dimension changes or alternate plans will be supplied. 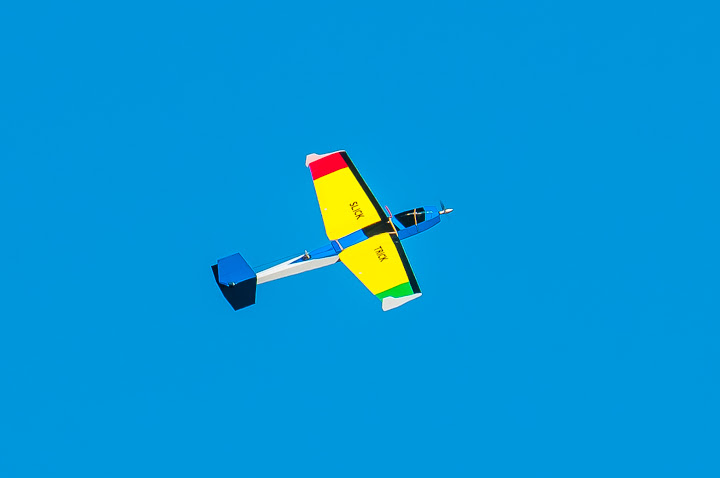 Design History
The inspiration for this build/design was another project which was a FB rendition of a Quick Trick the original balsa plans can be found at Outerzone. It was my first foray into making a semi-symmetrical wing profile. The original plane was quite fast especially when fitted with a funfighter motor. Sadly it was always a very fast beast with maneuverability that was incredible but it broke up in midair, (High G outside loop), and rather than replacing a mangled fuselage I built a longer fuselage with easy access, a better wing mounting solution and some dihedral. I also decided to lengthen the wing span whilst still using the original planes remaining wings.

The design was to utilise the offcuts I had around and to be a sport trainer of calm and yet highly spirited performance when required. Initially I ran a 100 watt 1400kV unit and later versions are running Funfighter motors and larger. Option landing gear can be added though it hand launches very well. So far there have been around 6 models produced and the build is for a specific customer order. So far of those built 2 have flown into goal posts, (both still flying after very minor repair and one has been replaced after it did a high speed, low level pass and then the pilot pulled up at the end of the pass spreading the plane over half of the runway! Additionally I did not want to have to fit CF spars or any other reinforcing materials. This design is the result of much flying, crashing, and some serious fun!

This build is of the latest version.

Plans will be posted when ready. Delay in plans due to redrafting of plans to clarify the design. Original plans overwritten with various modifications and improvements. If individual piece plans are required please advise!

Wing plans: Sorry for the delay but things just seemed to overwhelm me there for a while! Here are the revised basic wing plans with the tail pieces and an other odd piece or 2 from the fuselage.


The build and the Photos will be on a second and often edited post!

#2
The Build
The parts are being cut out to the latest plan version and the build will start this weekend.

The tail surfaces
After cutting out the required pieces you will need to cut and bevel the hinges and then cut and clear the reinforcing skewer channels as shown on the plans. 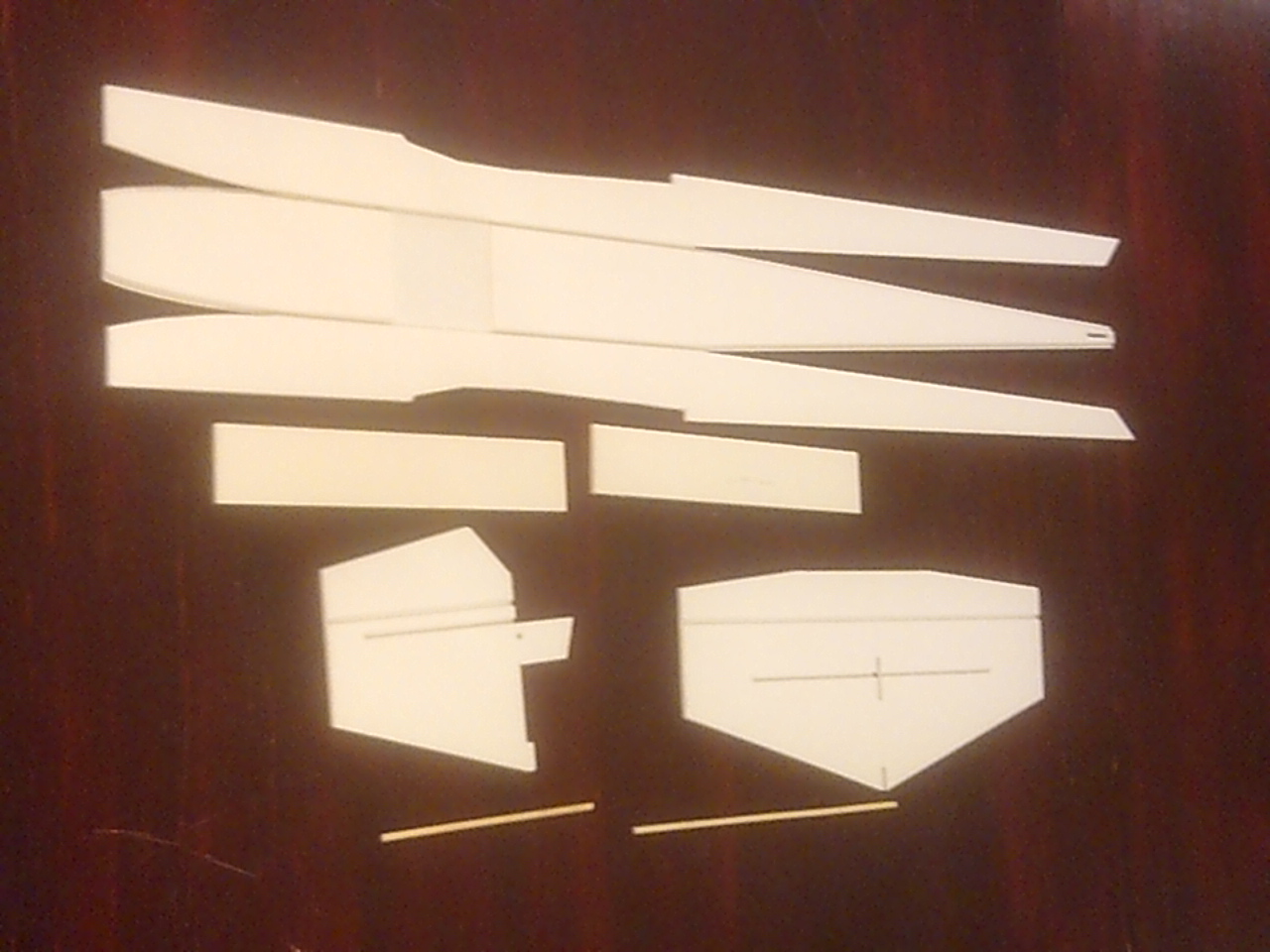 Here it gets complicated! First fit and glue the skewer into the vertical fin reinforcing channel and when the glue is dry trim the skewer in line with the base protrusion of the fin. 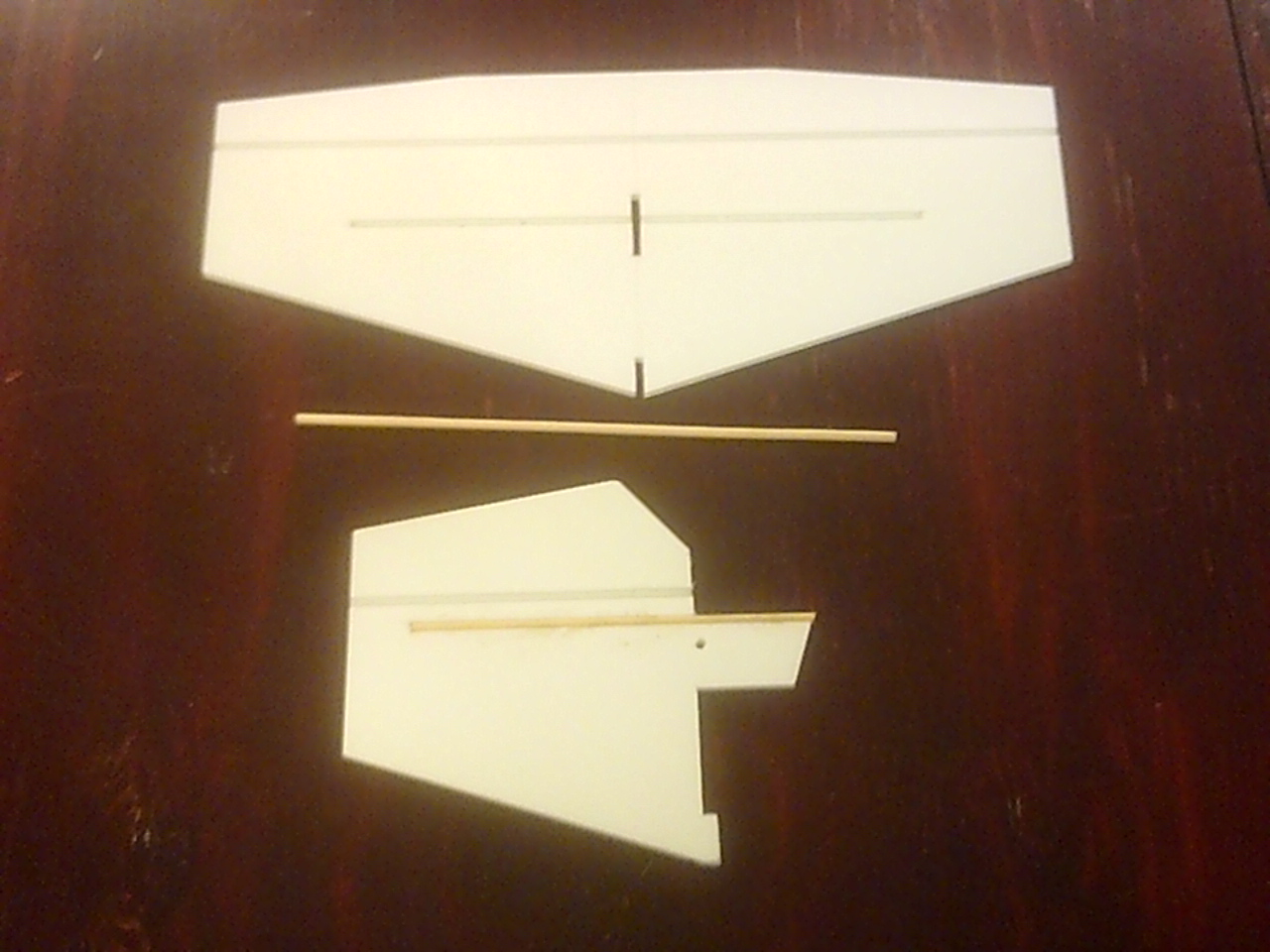 Now seal the exposed edges of the vertical fin with glue especially at the base of what will be the rudder.

Fit and glue the fin into the horizontal fin through the cutouts, 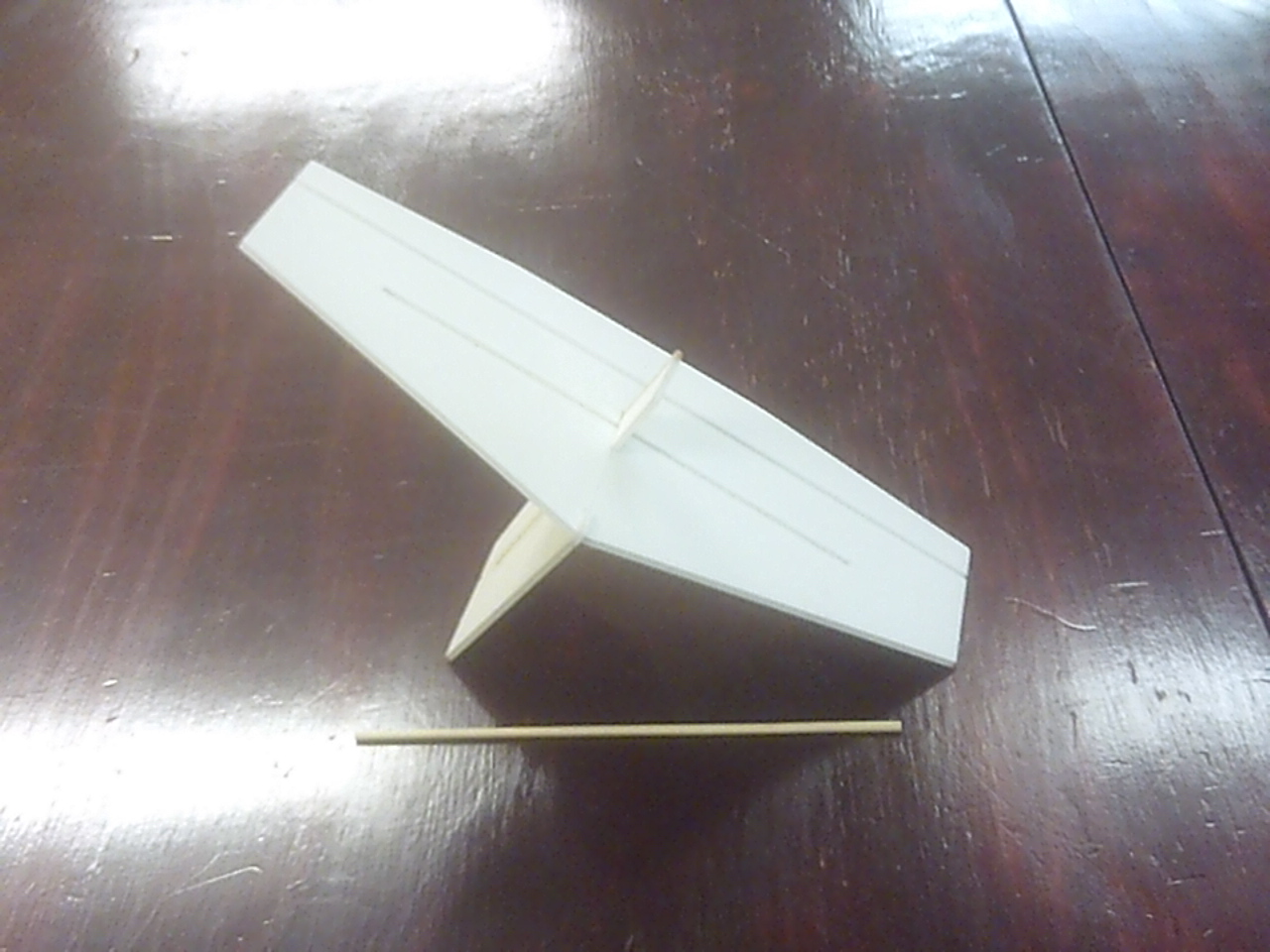 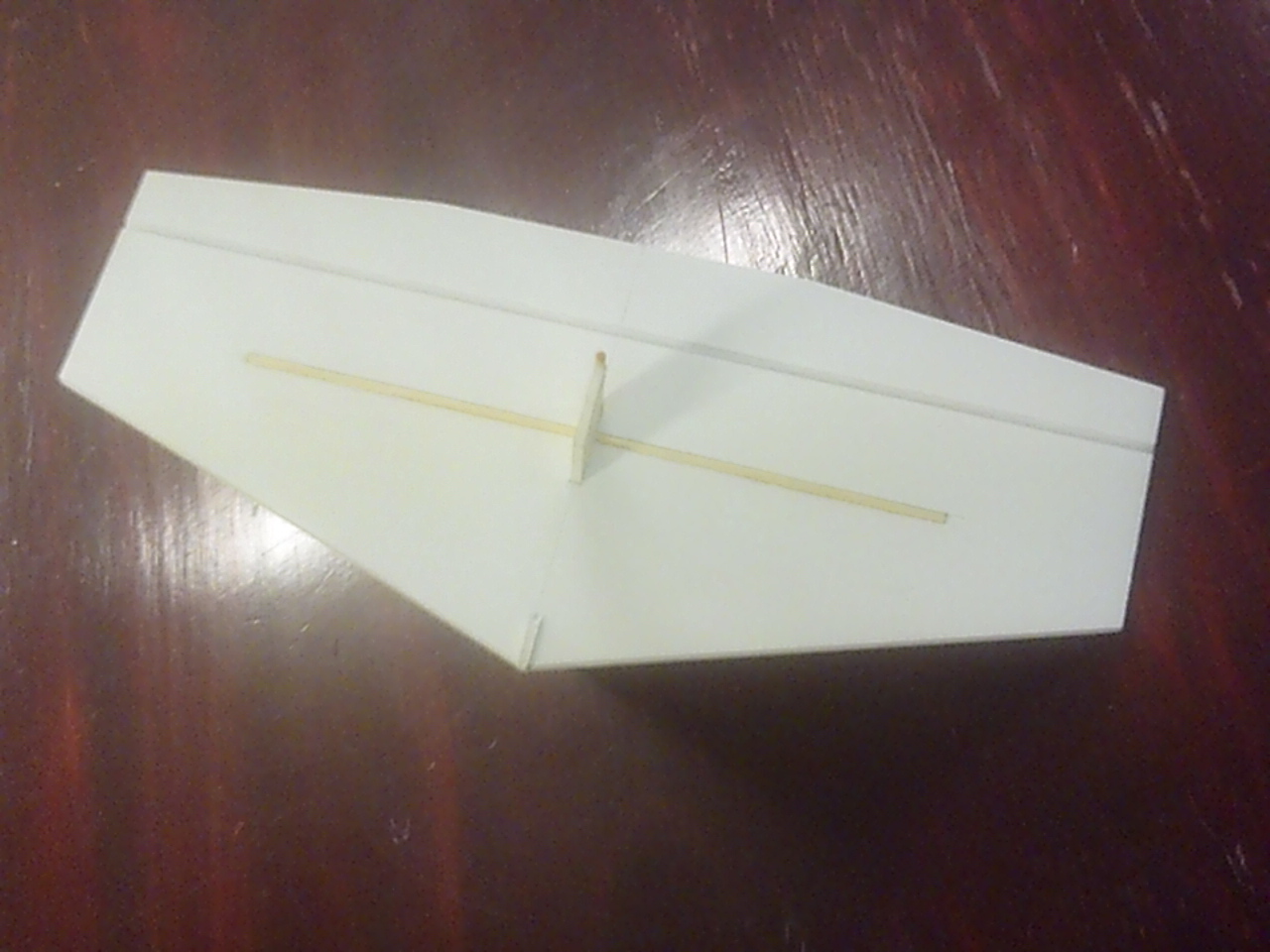 The wing centre section
After cutting out and bevelling the LE section just run a BBQ skewer down the fold lines on the inside of the wing panels and crease.bend to give wing its contour. Fit the narrow spar to the Front fold but at an angle so that it fits into the other panel front fold when the panels are folded over into their final position. Repeat the same procedure for the rear spar. 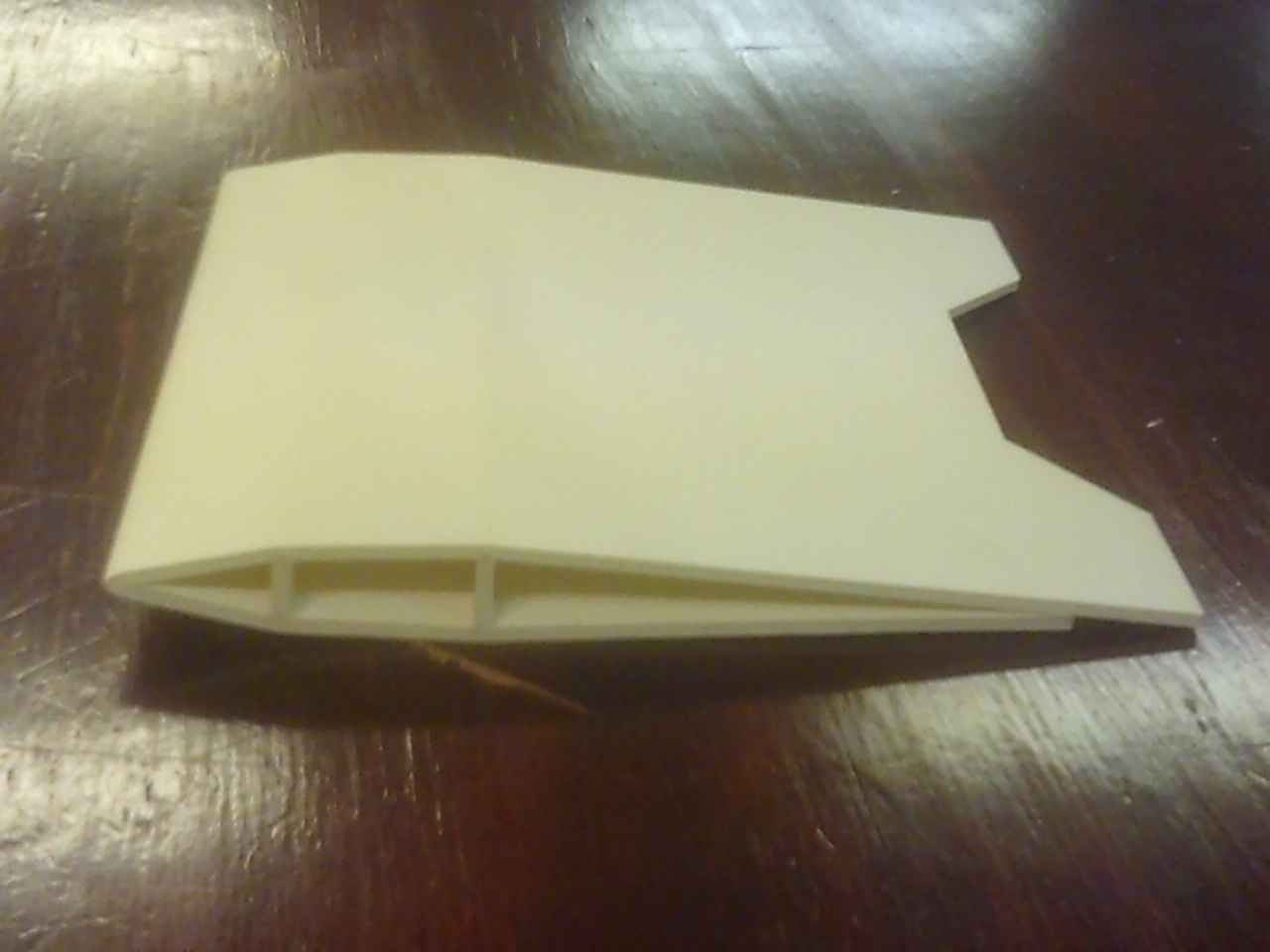 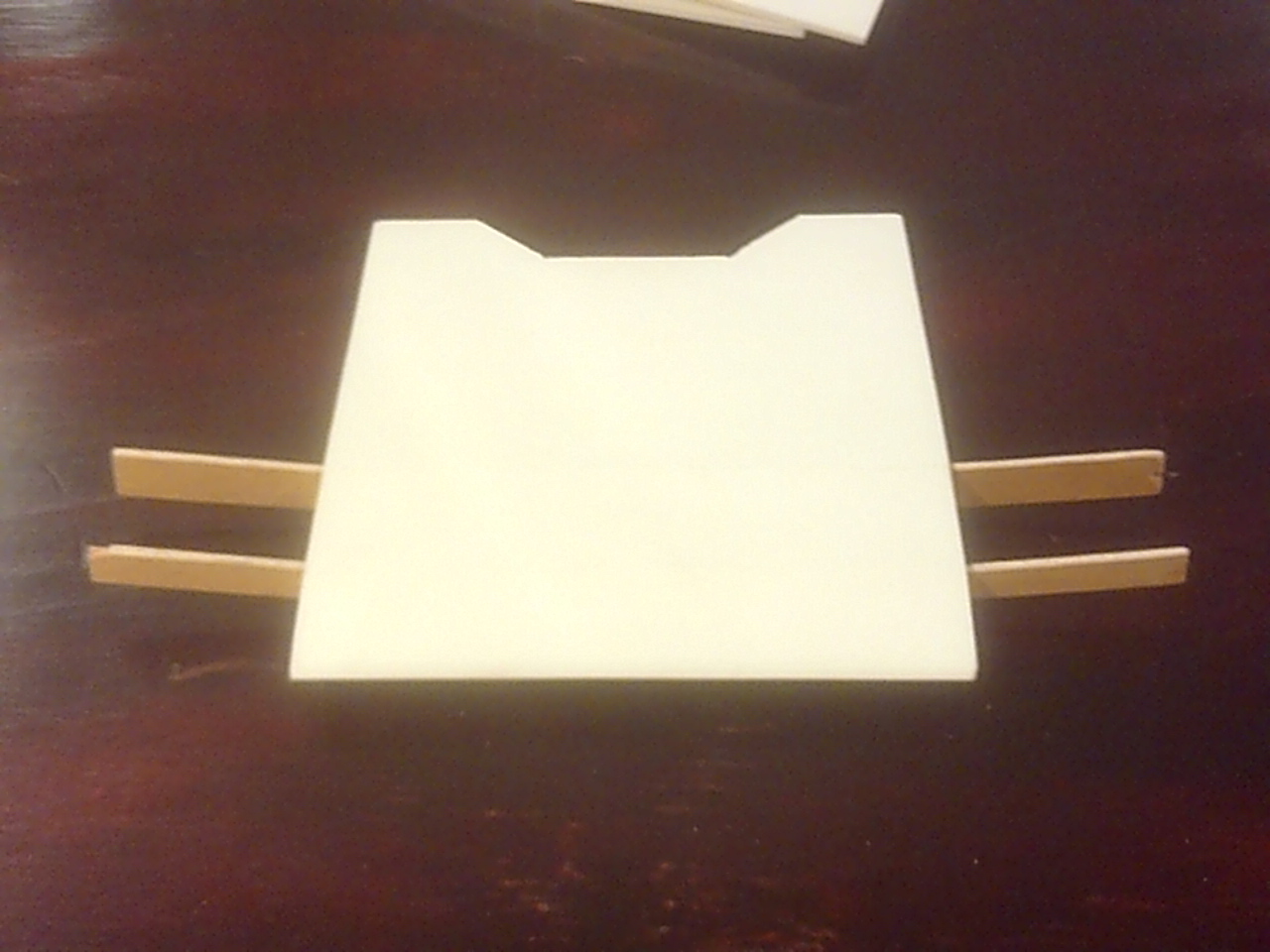 The outer wing panels or tips, though tapered assemble exactly the same as the wing centre section. Each one a mirror of the other.

The wing assembly is just a matter of cutting the mating surfaces to match the required dihedral angle and sliding the wing panels over the dihedral braces to glue to the wing centre section and the braces themselves of course.

When the wing is assembled and the glue is dry locate and glue on the winglets! 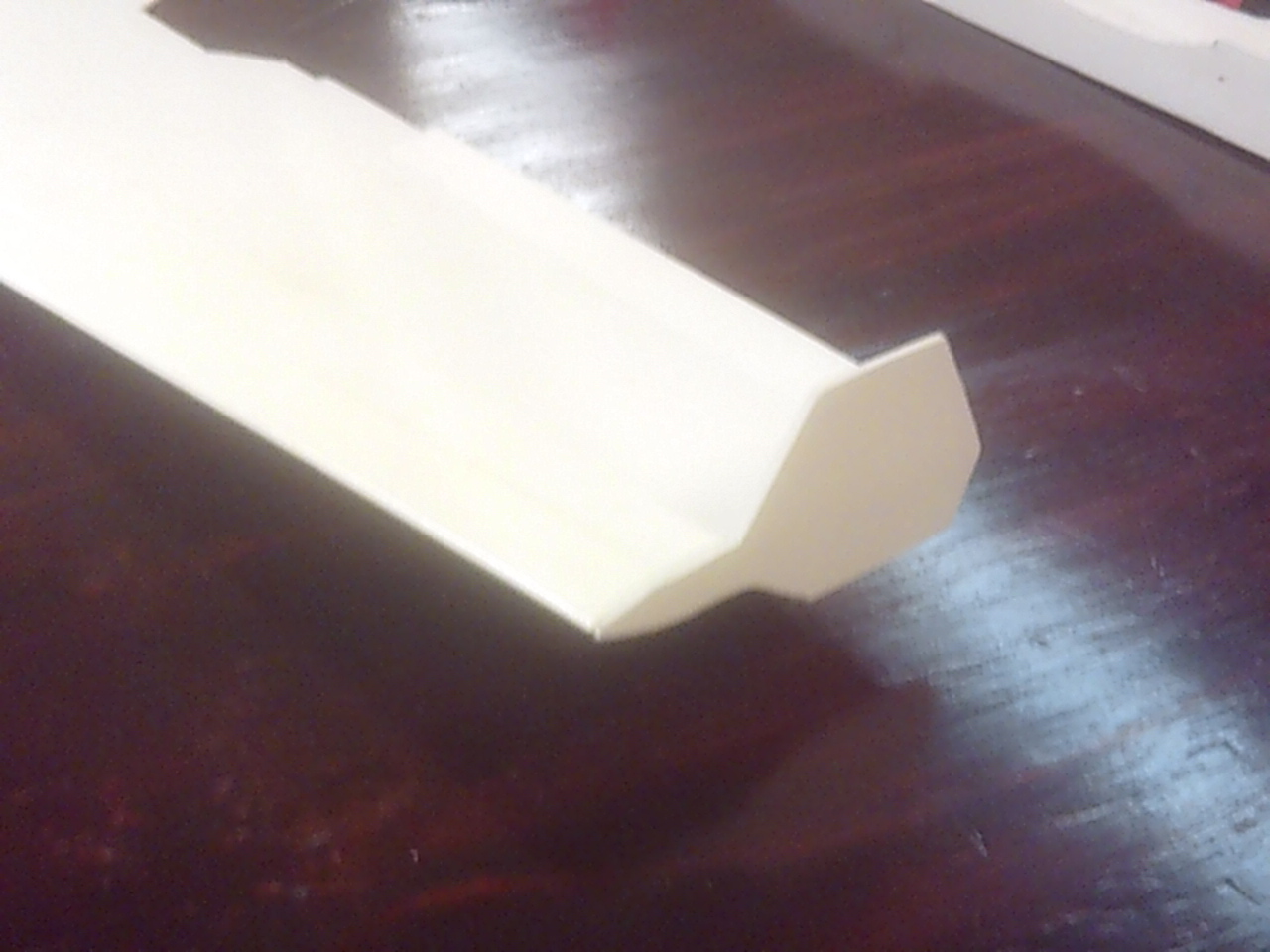 Now add the wing locating blocks to the underside of the wing. (Sorry I forgot and had to fit them after the wing was painted). 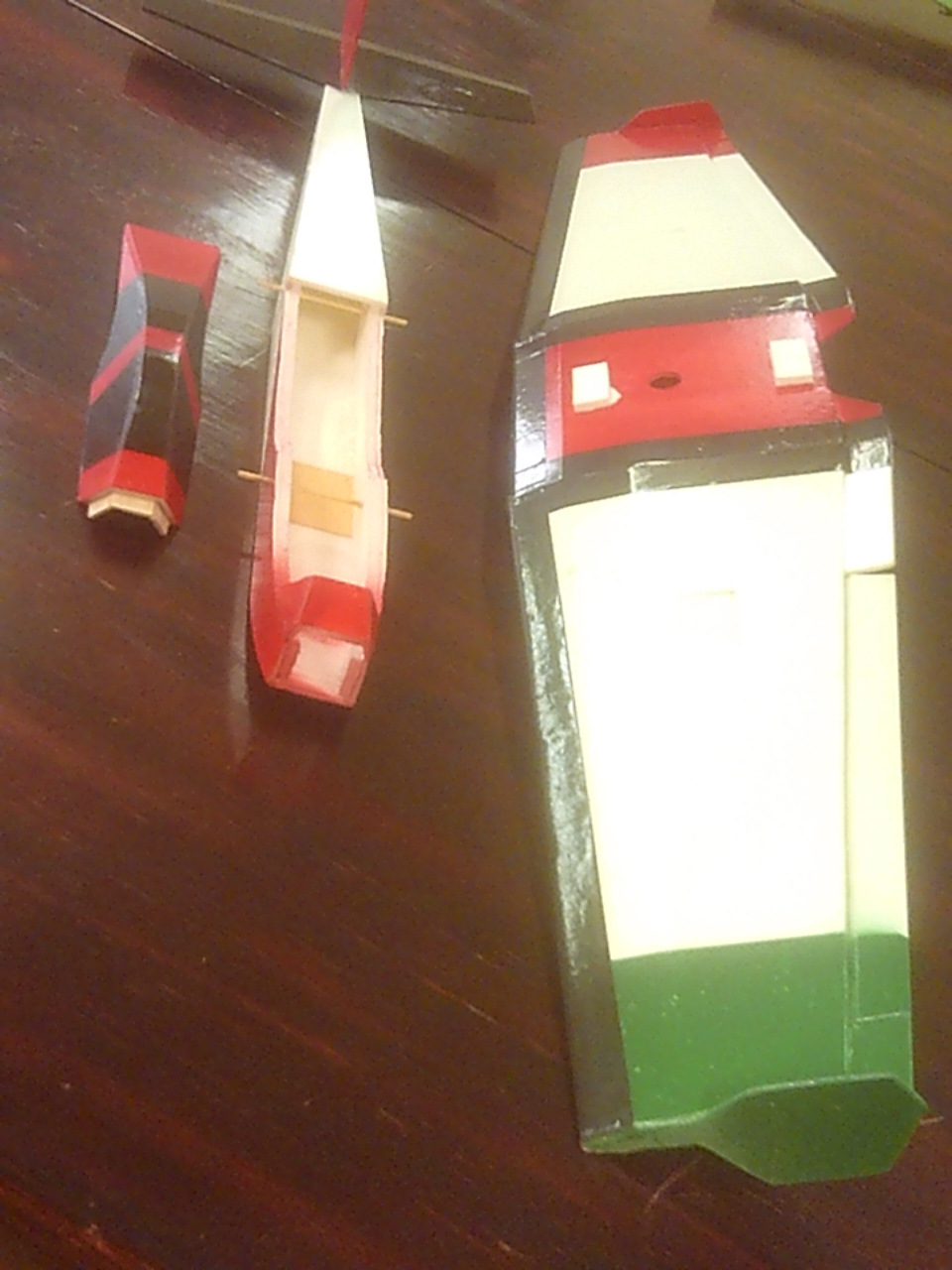 The jig is cut to match the height of the fuselage internal vertical dimension and has a number of formers each of which has sloping sides (inwards at 60 degrees starting at the level of the fuselage side. 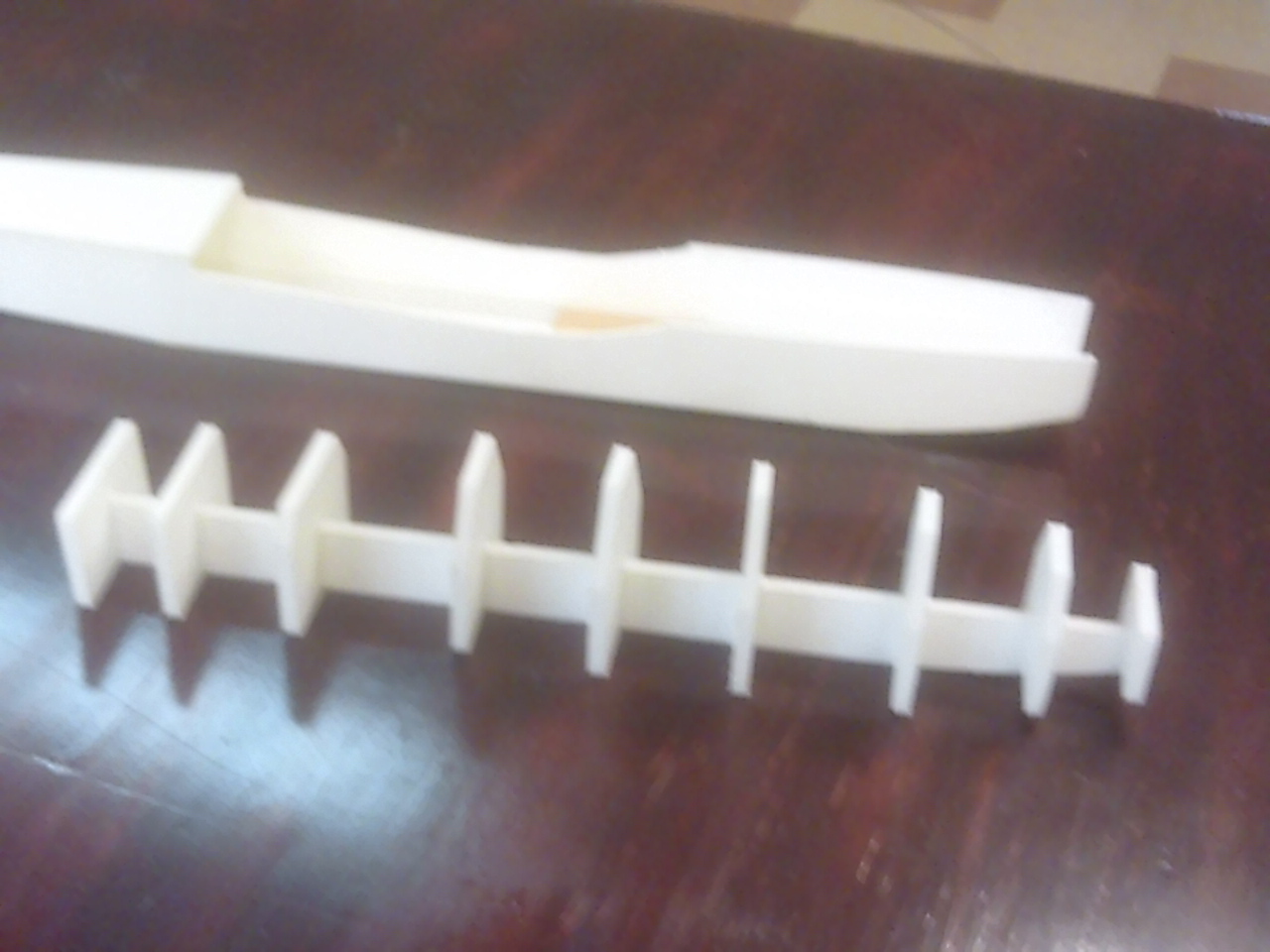 The fuselage
Cut out the fuselage base piece and remove the foam in areas indicated. Glue in the landing brace plywood piece. When dry fold up the fuselage and check the wing saddle for fitment of the wing centre panel, Adjust wing saddle cut out as necessary!

After checking the fit, seal or minwax the fuselage bottom outer surface, (this is to stop the tap used to hold the fuselage whilst the glue dries from ripping the paper when it comes time to remove the tape.

Fold up the fuselage sides after applying the glue ensuring that the sides are at right angles to the base Also ensure thet the tail boom is square and not twisted.

Crease the fuselage bottom nose section to facilitate the curve of the side pieces and glue again ensuring the sides are square. 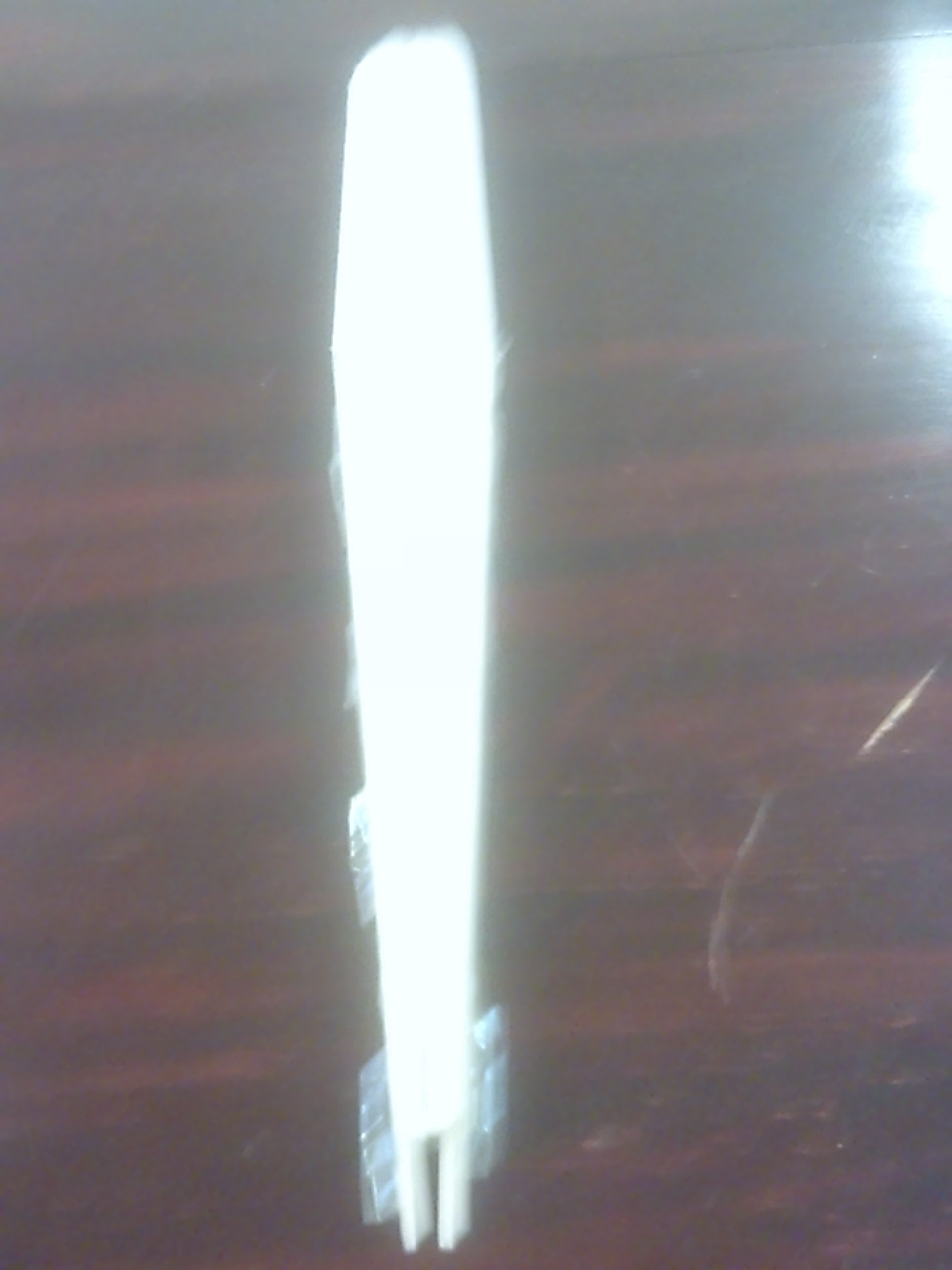 When all the glue is dry it is time to fit the fuselage rear deck and the tail pieces. this should be done at the same time to ensure that everything is properly aligned. Let dry. 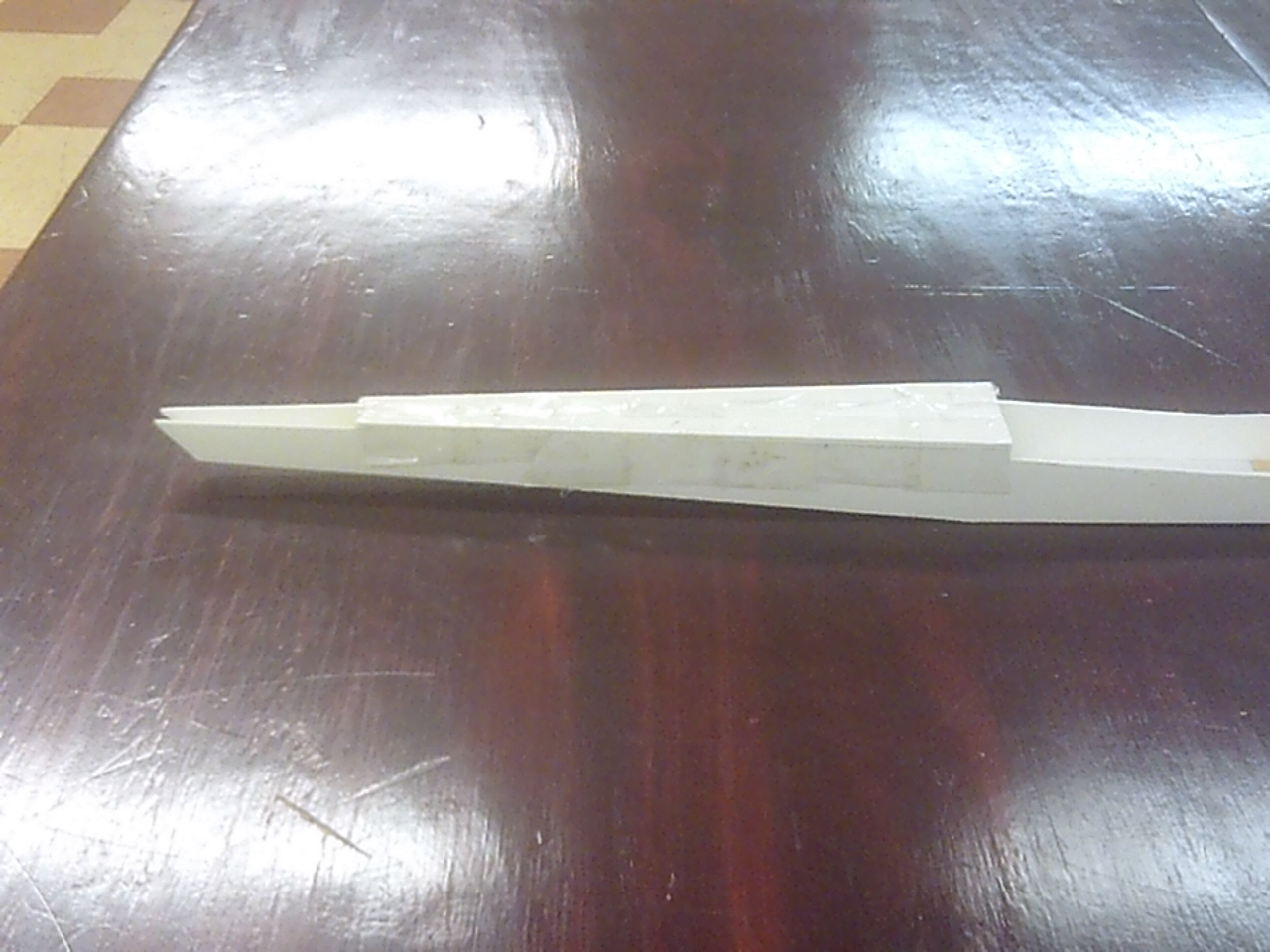 Fit the canopy jig or former into the fuselage. 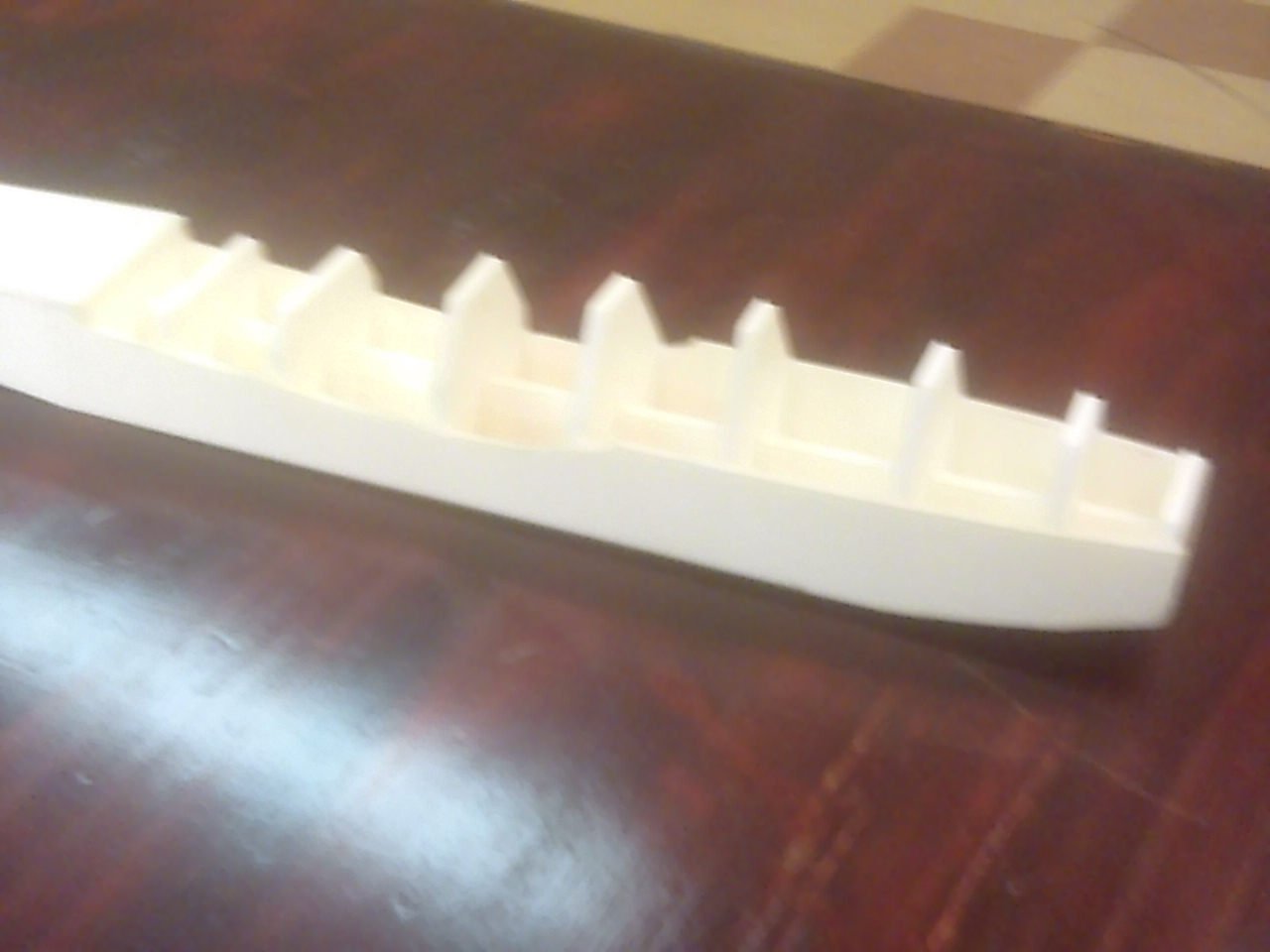 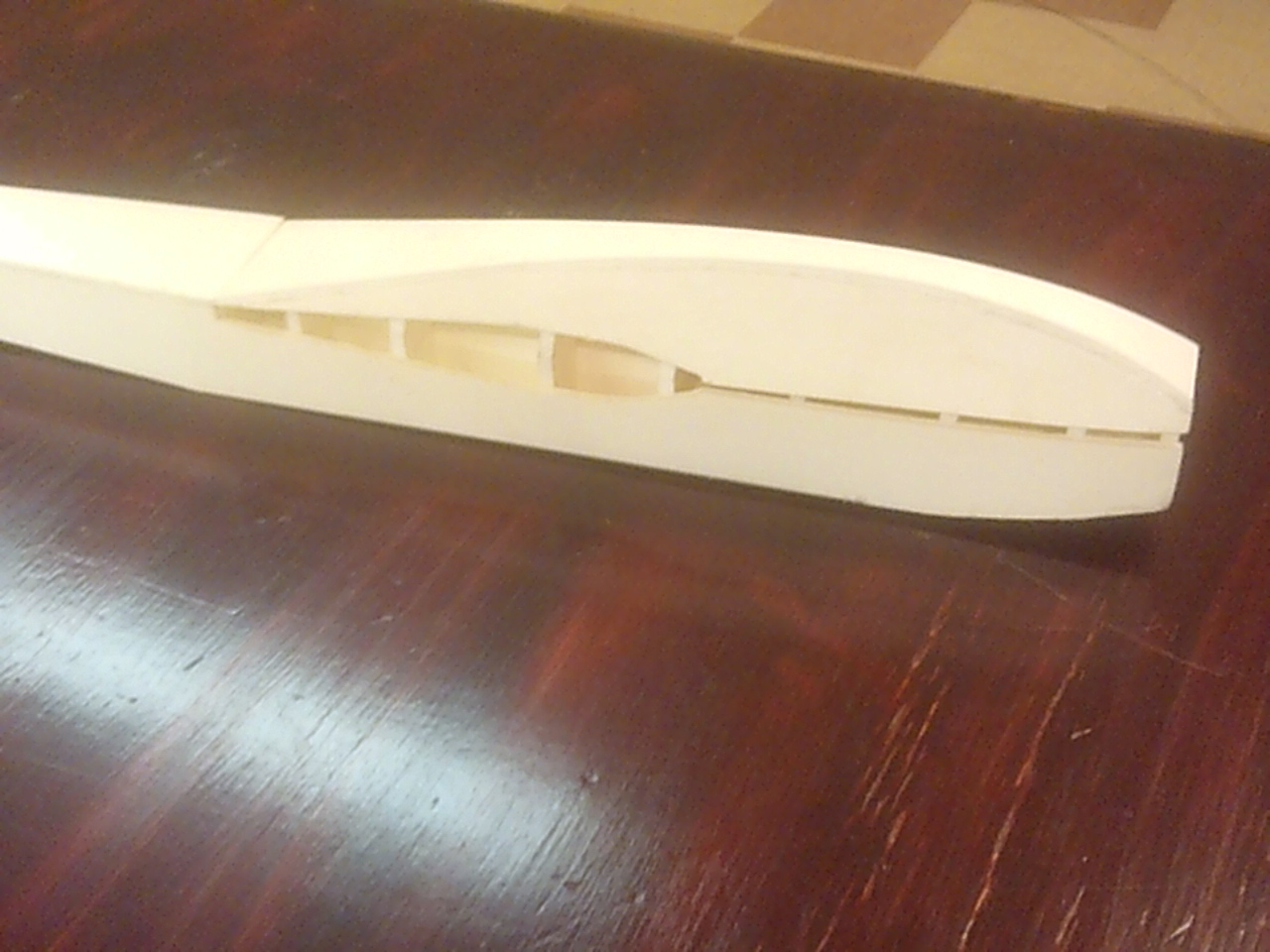 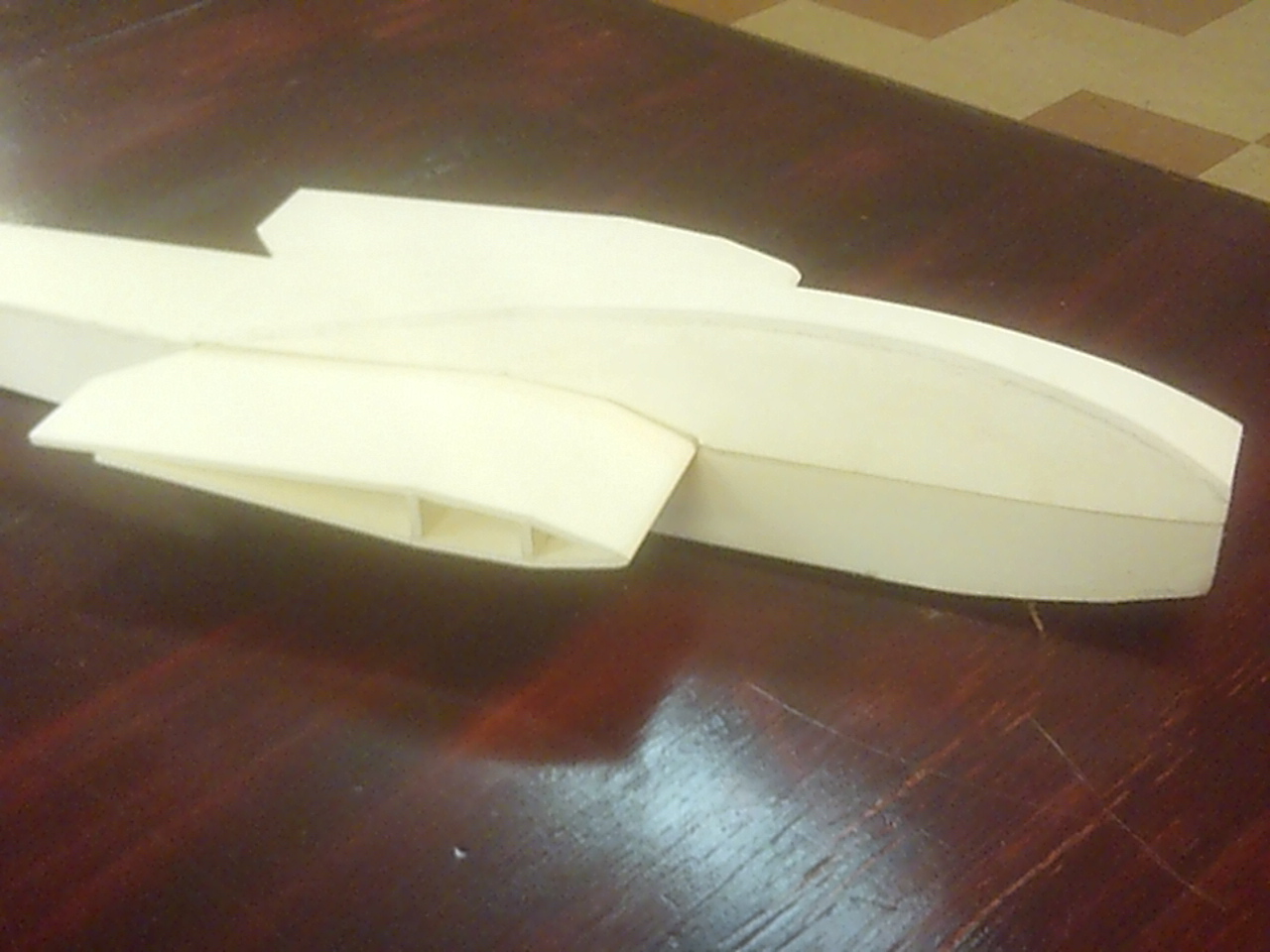 Mark and cut off the canopy nose. (Note: canopy illustrated is painted for ease of explaining the process). 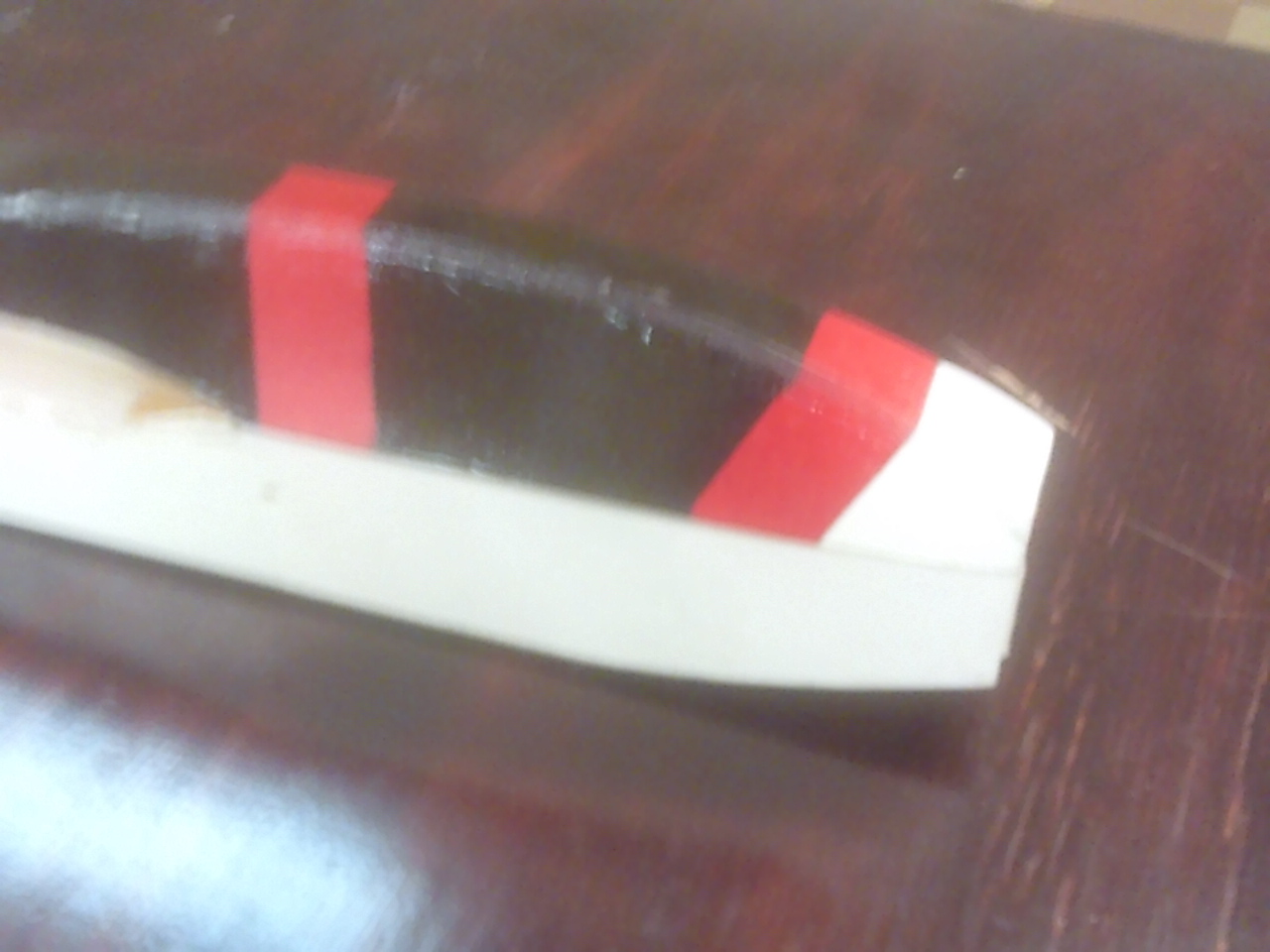 Glue locating tabs to the loose portion of the canopy! 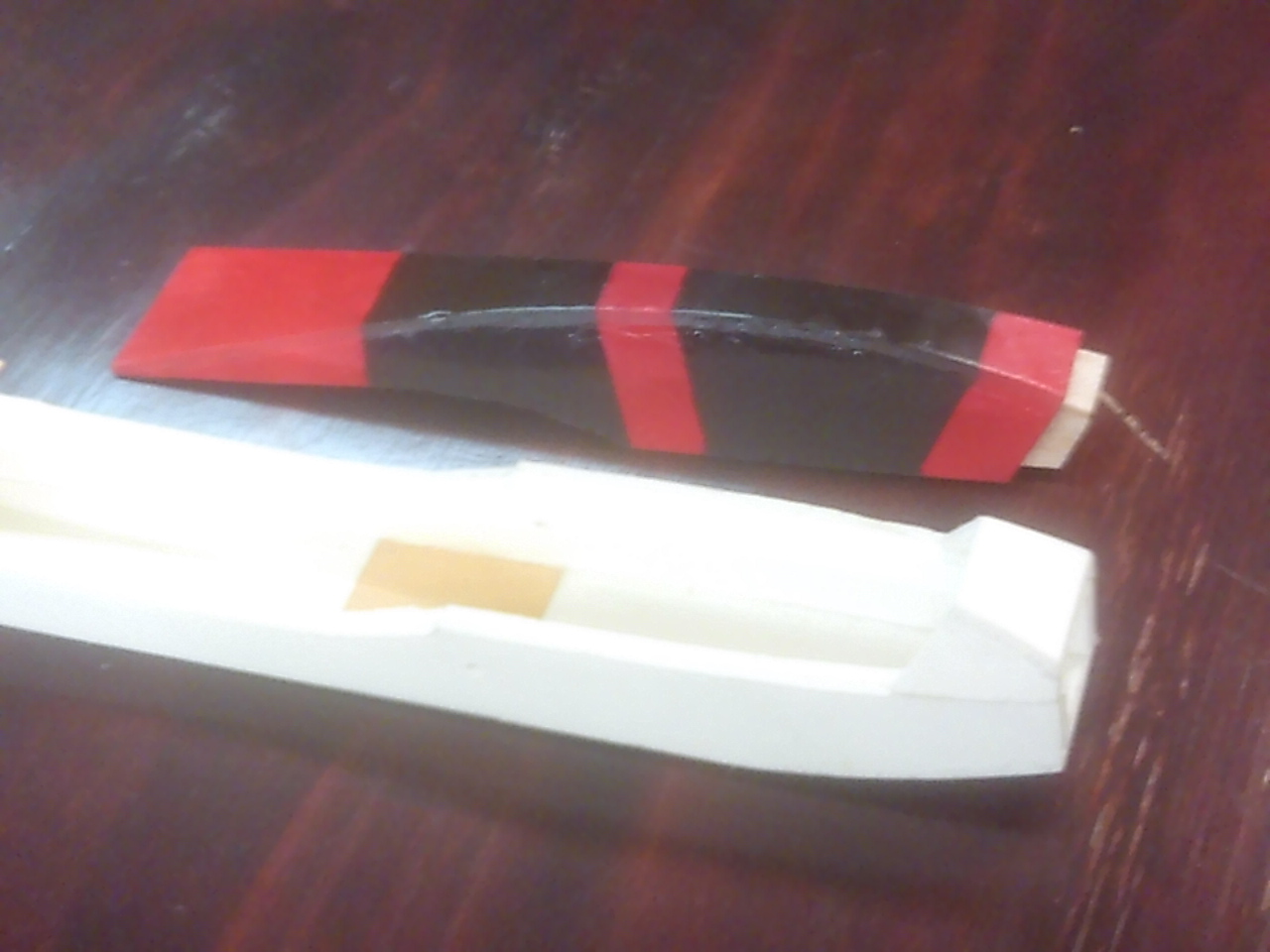 The final assembly
The three pieces all built up. 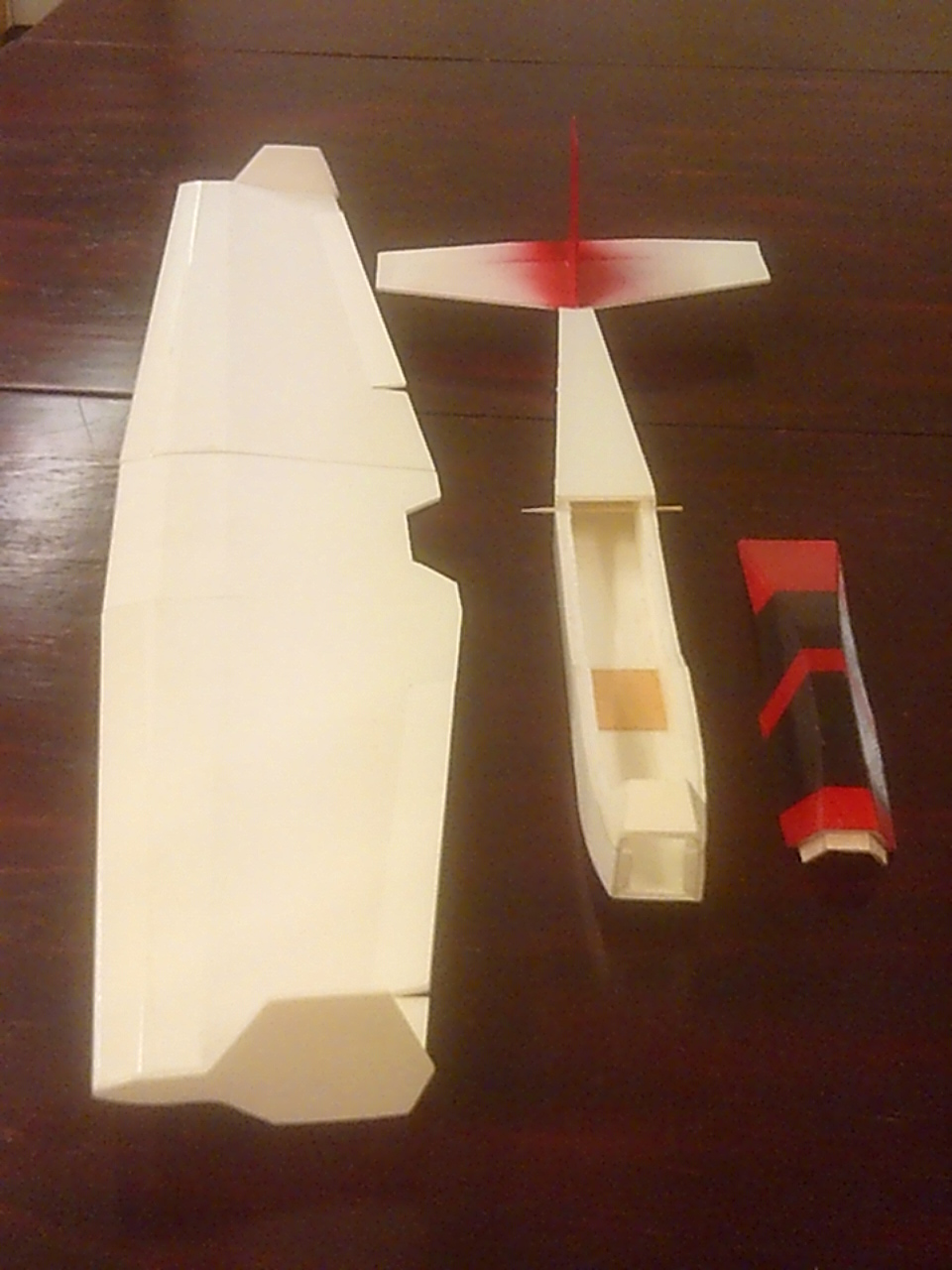 A final test fit or test assembly before the painting is completed! 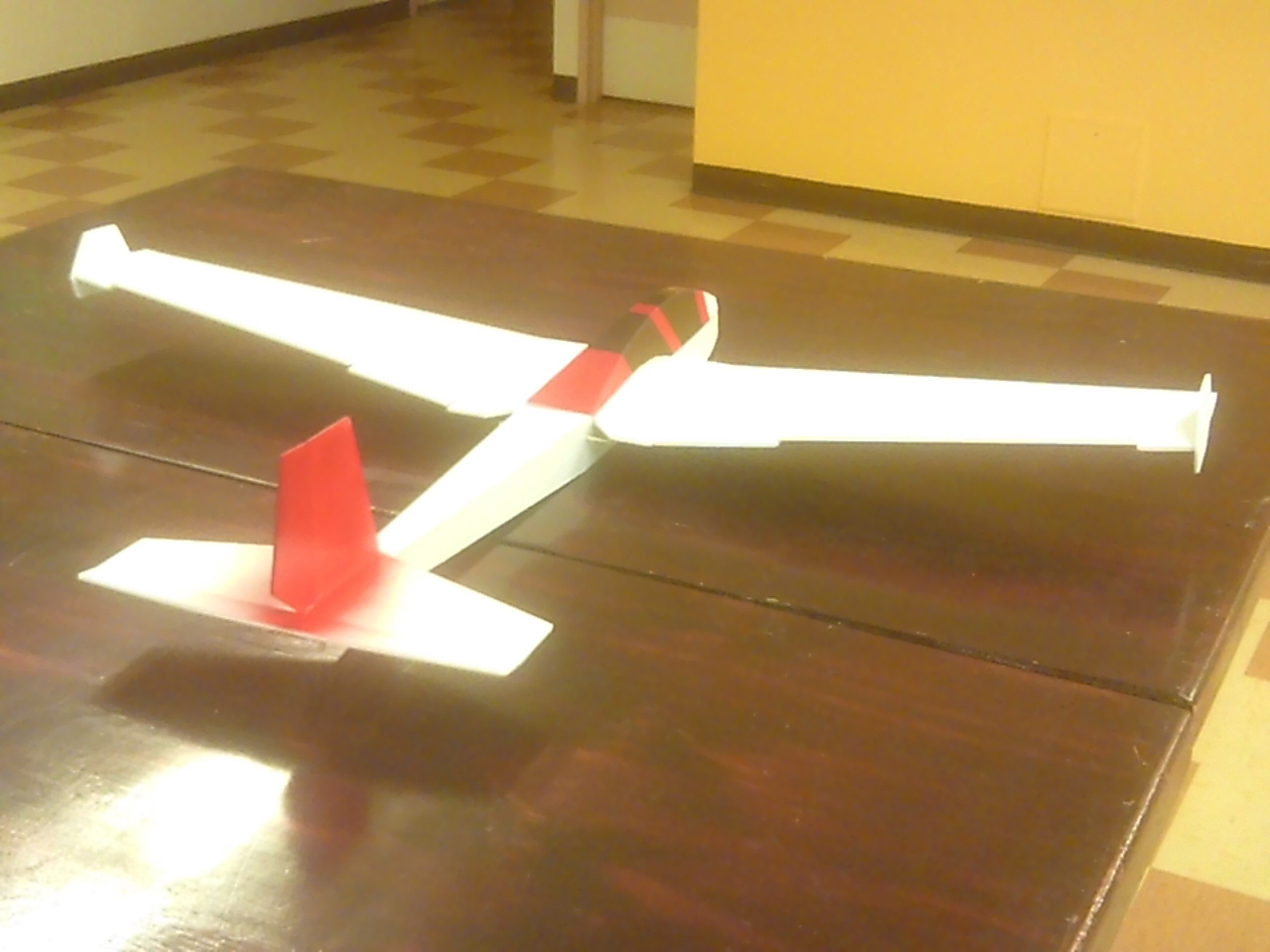 Final livery for this particular build 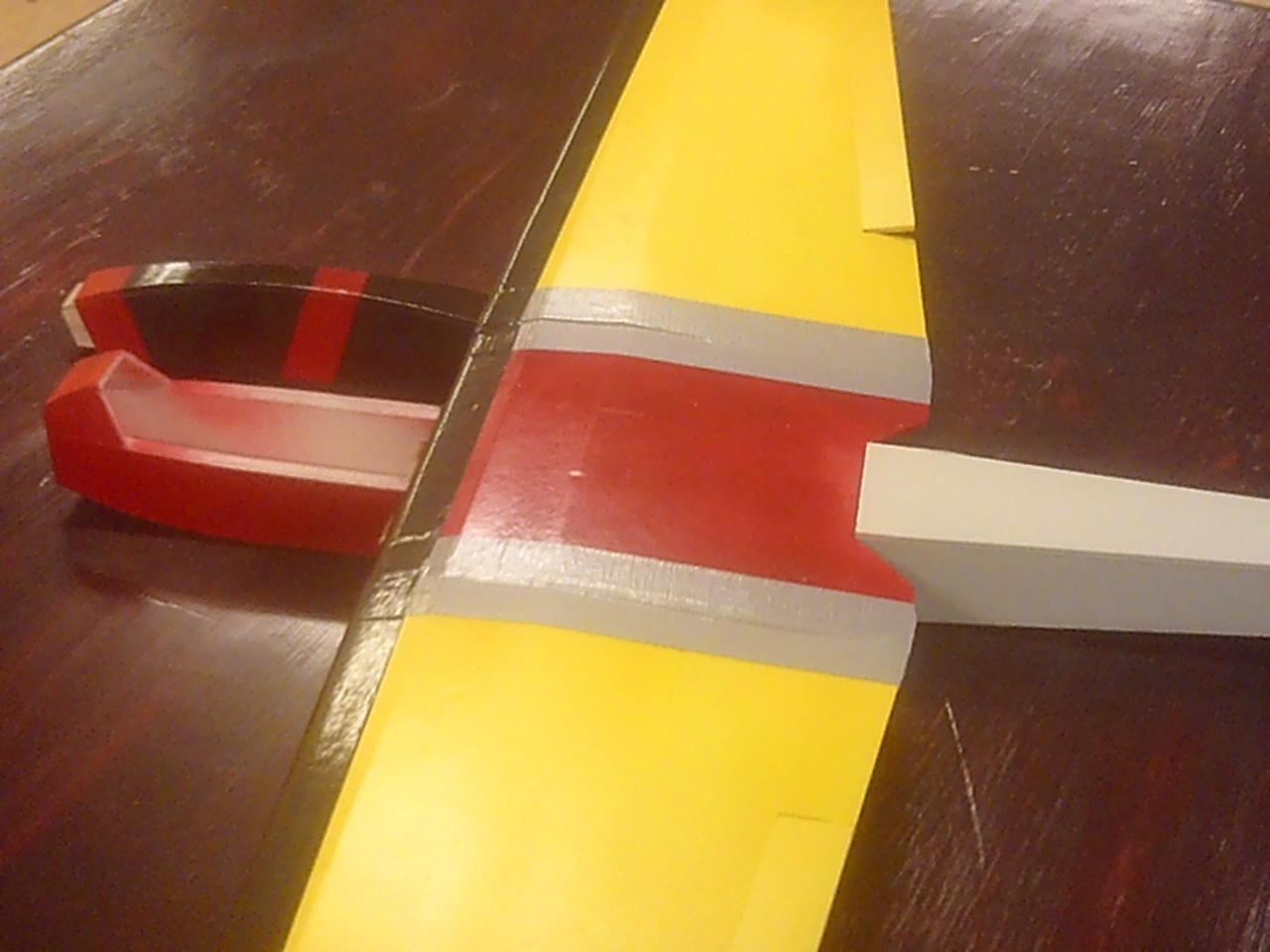 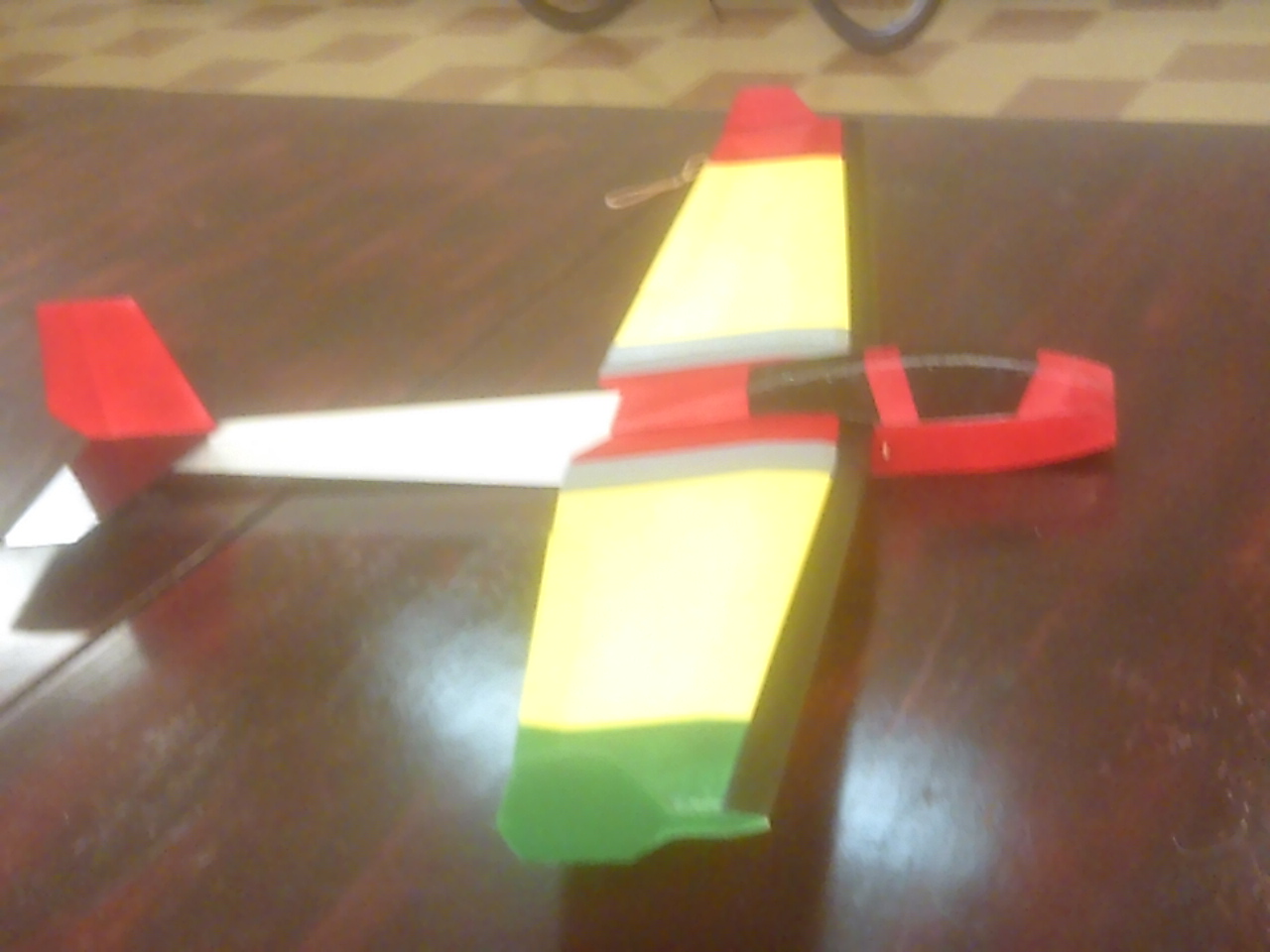 #3
For those following I wish to apologize for the tardy progress but I wanted to verify the fuselage plans and the jig for the hatch/canopy. Well at least I do have a test build to verify the plans prior to publication in that one of the flying examples is not flying anymore, (for the time being).

Sadly yesterday our time the owner was trying out spins and recovery and forgot how close the ground was, In the pilots words he just wanted to do one more spin rotation before recovering but did not see how close the ground was. Needless to say it was a power on spiral into the ground which had started at around 200ft. The impact destroyed the fuselage from the wing LE forward and the wing bounced and left the remaining pile of rubble. A check of the wing for damage showed just a single punched in the top surface, (from a prop blade we suspect) but otherwise is flyable condition. So a new fuselage was ordered!

Anyway the wing pieces are cut out and tested for fitment so soon the build will proceed and be finished in a short time.

As a secondary reason or reasons for the tardy progress is that I have been helping a newbie with the outfitting of his planes and fitting.setting up his radio system. This is combined with a new order for the Build one KFM Wings! Getting busy here!

Had to build a second fuselage as one of the flying examples had done a low inverted high speed pass followed rapidly with a sudden application of maximum up! The yellow fuselage is the new fuselage with the original wing fitted! 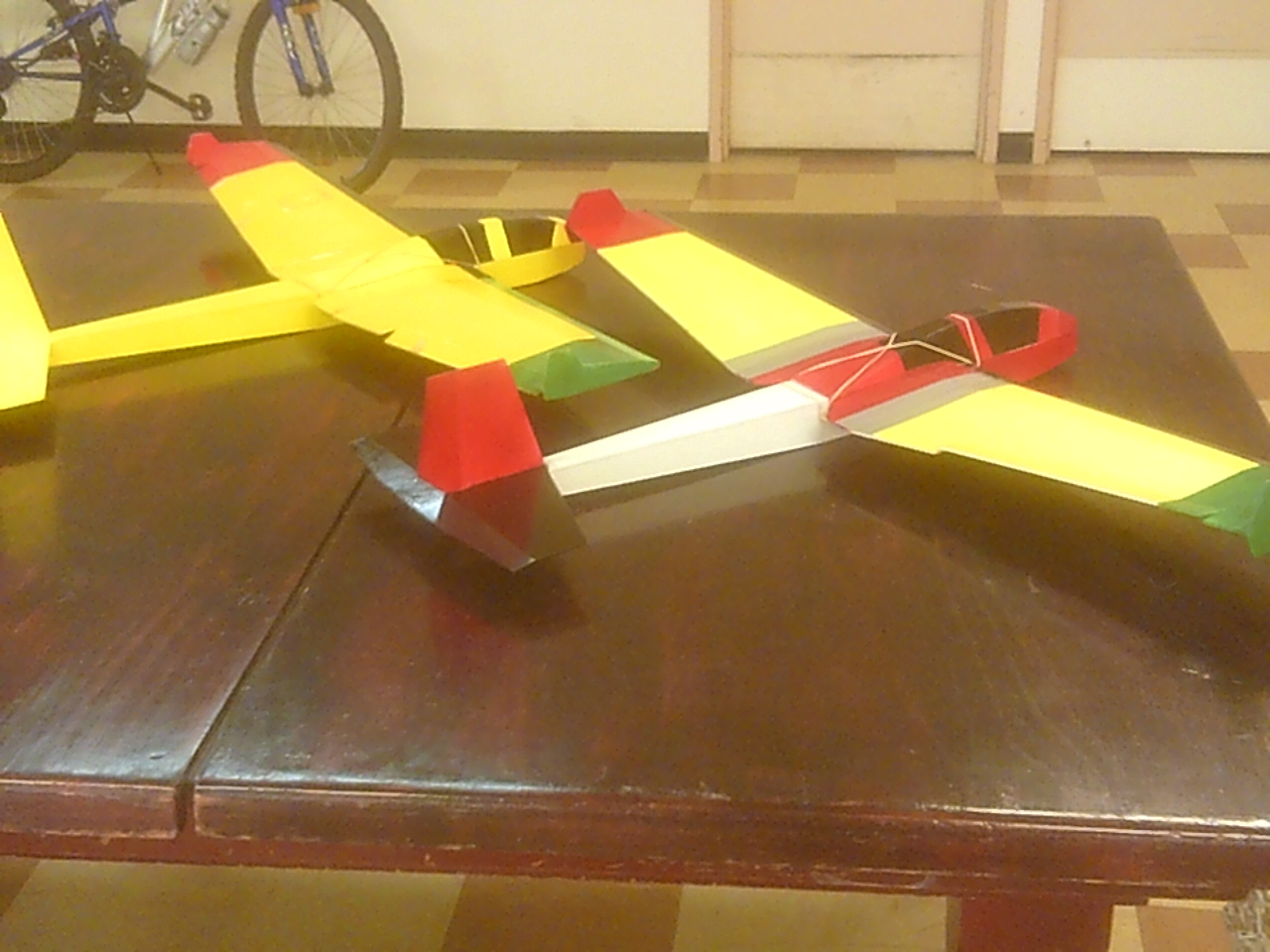