#1
Started work on an Otter two weeks ago. Wanted it ready to fly for our local club's float fly on Slocan Lake this weekend. Build was rough. Haven't built anything for a few months. Got most everything done last night and did final touches and battery charging this morning. Went looking for the 8 inch prop I was sure I had. Turns out it was a 9 inch and the only prop I have for my Explorer so I wasn't about to butcher it. Hummed and hawed and said to hell with it. Loaded the plane in the truck and headed north to the lake. Figured someone would have an 8 inch prop. Asked around. Watched some guys do an amazing job of flying some large gassers and electrics. Most were home builds. Everyone was flying big stuff and after much hunting around, they all came up empty handed. I went to say goodbye to the larger group so I could go home and mutilate a 10 inch prop. Then I headed over to show the Otter to a guy, Life, who was interested and knew all about Flitetest planes.

Life was flying this beautiful hand-built balsa plane. Called a Lakemaster and designed by Ivan Pettigrew of Victoria, BC. If you've ever seen the large scale RC Martin Mars videos, that's one of the planes Ivan sells balsa plans for. The Lakemaster is gorgeous and a pleasure to watch take-off, fly and land. Guy was an amazing pilot. Seventy four year old retired machinist. You should see the spinners on his planes. When I showed him the Otter, he said he had a 7 inch prop that might work. After some rummaging, he pulled out an 8 inch prop. I loaded up an 1800 4S and we went to the beach. Water was like glass.

I haven't flown for about 3 months. As soon as the Otter went in the water, I started shaking. Applied power slowly. Added more power. Then more power. And then it took off! Life helped me trim it out as he could see I was shaking. I flew around a bit and then did a rough landing. Kayakers were incoming and the last thing I wanted to do was hit them. After they passed, I took off again, flew around for a bit, tried another landing and flipped it in the drink. I hollered up the beach for a boat. Some guy poked his head out and said I could use his kayak. Some random camper not even there to fly.

So out I went. Got to the plane, picked it up, removed the hatch and the battery. Drained a half liter of water out of the plane. Paddled back to shore. Life blasted my ESC and receiver with WD40 and after a bit of monkey business, the motor fired up. Back in the water. Did a couple of beautiful take offs followed by a couple of rough landings, the last of which loosened the battery enough that when I climbed out hard, the plane went squirrelly. Cut power. Splash. Kayak. More WD40 followed by a great BS session with Life, an RC pilot of 50 years. He wants to build some Flitetest planes. Loves the idea of smaller planes with minimal build times. His Lakemaster took him all winter to build.

Sun was about to set and I had an hour drive home so I said goodbye, promising to return tomorrow with a new and improved battery tray and some bacon and eggs from our farm for Life and his wife. All he does in summer is travel around to RC fly events. On the drive home I thought about how flying with others is way more fun. All my flying has been alone until today.

The Lakemaster Life was flying has a great design feature. The rudder extends down low enough that when you hit the throttle and the plane rocks back, the rudder digs in and becomes effective in the water. So simple. Good rudder authority in the water with one rudder. Going to modify my Otter to include this. Perfect for this plane.

My Otter, a little worse for water and wear.

The Lakemaster. Life's plane was much sexier than the one in this photo. He modified the wing and fuselage. Gorgeous. Will grab a shot of it tomorrow along with some of the large gassers which were pretty cool. Gotta say, I was really impressed by the balsa and gasser community today. These guys are artists. Planes that weigh 25 pounds and fly scale. A beautiful thing to see. 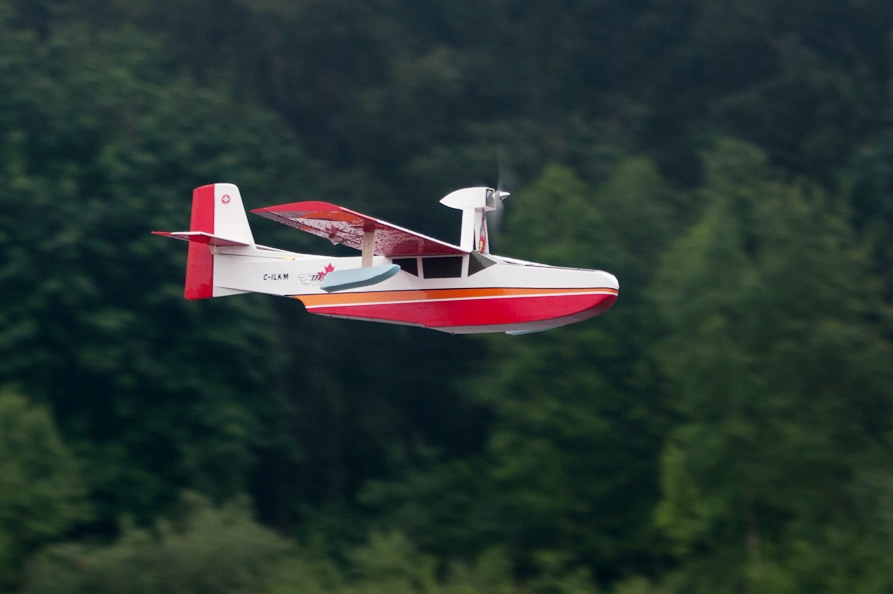 Gonna ask Life if he'll video me flying/splashing tomorrow. Never had that opportunity before.
Last edited: May 11, 2019

#2
Life's Seagull. Not a Lakemaster.

Big gasser. Just under 6 foot wingspan, 32 pounds, aluminum floats. All from scratch. A different presence in the air than electric.

The two flying together with New Denver Glacier in the background.

My Otter is looking pretty rough. Regular foam board doesn't cut it without some serious efforts to waterproof inside and out. Cooked an ESC and a servo today. Rudder hinge separated. I destroyed a battery tray each day. All around mushy plane at the moment. Hoping once it dries out it will be salvageable. Doesn't seem to matter how anal you get with tape, it doesn't cut it for waterproofing. Definitely won't build another seaplane without using paper and minwax to waterproof the fuselage. I would do the pilon and motor pod too and do them all as one piece. Maybe the vertical stabilizer/rudder too although I'm not sure how you'd do it and end up with a functional hinge. Not sure if there is a solution to waterproof between the canopy and fuselage. Another problem. If I'd quit flipping it into the water none of these problems would have occurred but the chances of that happening at my skill level are almost zero.
Last edited: May 13, 2019

#3
I wonder if you could use a sanding sealer on the paper to harden it before applying a water-resistant silicon coating?

#4
bracesport said:
I wonder if you could use a sanding sealer on the paper to harden it before applying a water-resistant silicon coating?
Click to expand...
Never used it before. Was thinking the technique Peter used to waterproof was a good option. Gotta figure something out if I'm gonna build another seaplane as the foamboard really doesn't like water. It was a lot of fun flying off water so I'll take another stab at it. Really tempting to get some water resistant foamboard but the shipping etc to Canada is stupid expensive.

#5
Wonder if packing tape, then paint would work?

I've had a few of my planes survive inadvertent water landings and the packing tape seems to work well to waterproof them...

I've had a few of my planes survive inadvertent water landings and the packing tape seems to work well to waterproof them...
Click to expand...
My problem was several inadvertent landings before I'd finished one battery. Both days. It was more boat than plane.

I was thinking reverse order. Paint first. Use that to seal up paper edges etc. Then tape over top for strength where required. Other thing is waterproofing the inside. Not sure of the best way to do that but going to give minwax a go on the inside as it's going together. I know hot glue on tape can be problematic and figure you're probably best not to hot glue over a part that has been pre-minwaxed. Until now I've pre-taped my plane parts before assembly and have learned this is poor practice. Works sometimes but not others. On high stress joints, it's pretty much guaranteed to fail.

#7
Ive had a lot of tape over paint, but that was usually repairs! Lol

Ive noticed I can get a lot more strength from my hot glue joints when over do the glue a bit and run a scrap piece of foam (or a finger) down the joint to remove the excess. This puts a nice smear 1/8 to1/4" up each side of the joint so it holds the foam and paper both (and keeps water out of the joint)

I bought some min wax last fall in preparation for a few water planes but never got them built before winter hit. Keep us posted if you think it works!

#8
@jross, thanks for this thread. It's been insightful, informative and a joy to read.

#9
Hondo76251 said:
Ive noticed I can get a lot more strength from my hot glue joints when over do the glue a bit and run a scrap piece of foam (or a finger) down the joint to remove the excess.
Click to expand...
I agree. If I want a really beefy joint, I put glue on afterwards and cove it with a finger covered in spit. The finger I use lost all feeling in the tip after a couple builds! Perfect. I work around the farm a lot so my hands are a bit like leather. But that hot glue can hurt when it sticks. Secret is lots of saliva.

#10
The more I look at photos of Life's Seagull and the Otter, the Seagull is a stretched out Otter with a high wing. Life figures it could be built from foam.

Not a really big plane and as much glider as seaplane. I found the Otter wanting for wing as a greenhorn pilot. Kept stalling the damned thing and the steeper glide slope caught me off guard. Nothing like I'd flown before. My Arrow glides better.

If I can figure out this whole waterproofing issue, I think the Seagull would make a great foamboard seaplane for beginners like me or anyone who wants to sit on the beach and relax.

Ivan Pettigrew's plans and some photos. Gonna spend the $35. Check out some of his other builds. He's 88 and still flies, although not like he once did. I was really impressed by Life's Seagull. Beautiful in the air and on the water. 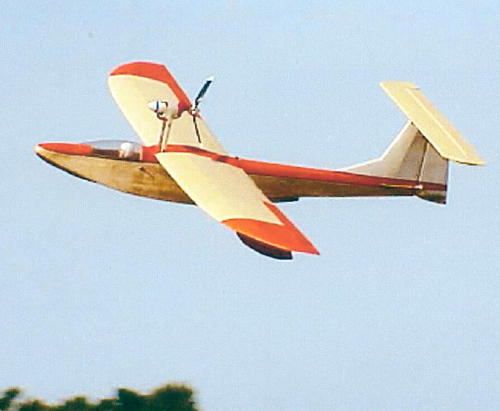 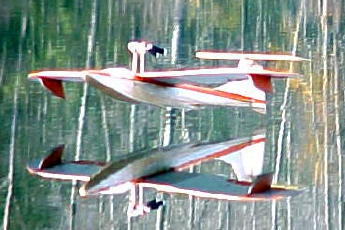 #11
Another cool seaplane from this weekend. No idea what it is. His radio bound but his ESC kept beeping and he couldn't figure it out so didn't fly.